Mexico — One Plate at a Time

Mexico — One Plate at a Time 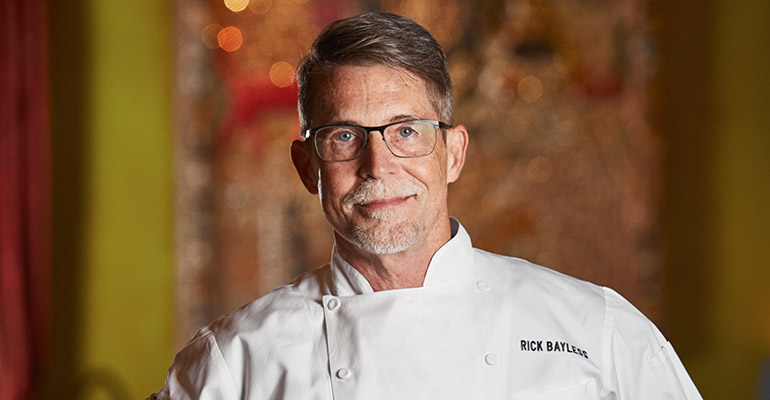 Mexico—One Plate at a Time

Season 11 of Mexico—One Plate at a Time with Rick Bayless centers on the vibrant food scene and burgeoning chef movement in the Yucatán peninsula.

After ten seasons of exploring various states of Mexico, we couldn’t resist the allure of the Yucatán peninsula. The Yucatán Peninsula is home to North America’s largest indigenous population – the Mayans – with the highest percentage of native language speakers in the country. Home to one of the world’s great cuisines, it shares much of the culinary practices and basic ingredients of the rest of Mexico. However, its unique location put the peninsula in a position to welcome the cultural influences, ingredients and flavors of Spain, Portugal, France, Lebanon, Cuba, Africa and the Caribbean. Uniquely Yucatecan ingredients, such as achiote and limas, along with pit-cooking techniques, set the cuisine apart from the rest of Mexico. We witness the global influences on this large state with hundreds of miles of coastline.

For the eleventh season of Chef Rick Bayless’ highly-rated cooking and travel show, we’re taking our viewers all over the Yucatán peninsula to explore a burgeoning restaurant scene, evolving cuisine and ancient culture that makes this state so irresistible.

Rick takes viewers on a journey as seen through the eyes of Merida’s passionate chefs, Playa del Carmen’s fisherman and eco-minded restaurateurs. Episodes feature a prominent chef in his/her acclaimed restaurant or establishment. The chef prepares a dish and guides Rick on a tour of their inspirations for a life in food—from their grandmothers, to abundant markets to significant restaurants. Then Rick, the consummate cooking teacher, brings it all home so viewers everywhere can try their own hand at this incredible cuisine. 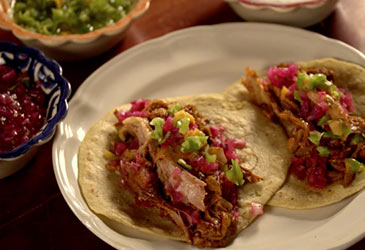 Markets in the Yucatán are some of Mexico’s most stunning; stalls sell everything from dozens of varieties of citrus, to stunning fresh seafood. Rick takes us to a traditional market in Merida and a community-building farmer’s market in Playa del Carmen. 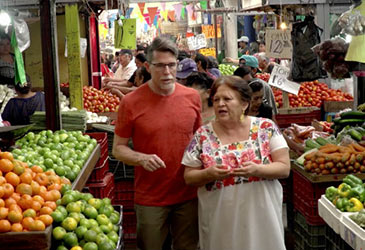 Deep in the Sian Ka’an nature reserve, there’s a seriously remote village called Punta Allen, where a team from the local sustainable lobster fishing cooperative brings Rick and Chef Juan Pablo Loza out for an afternoon at sea. The day’s catch? A Caribbean lobster, simply prepared in coconut soup. Back at the ultra-luxe Rosewood Mayakoba resort, Juan Pablo showcases the tranquil resort gardens before preparing a feast of grilled lobster zarandeado with adobo mayo and sweet corn puree in the kitchen of La Ceiba, an outdoor garden party area. Inspired by the tropical abundance, Rick heads to his backyard garden with master gardener Bill Shores before making greens with grilled honey-lime dressing and a sweet-and-spicy, chipotle-honey glazed shrimp dish.

Ask anyone about traditional cooking in the Yucatán and you’re bound to hear the name Miriam Peraza, a grandmotherly dynamo who knows every nook and cranny. She brings Rick to the bustling Mercado de Lucas de Galvez in Merida for a quick tour that includes a rare look at the making of recado spice pastes. Flanked by villagers in the remote town of Yaxunah, Miriam and Rick drop in to watch the making of pit-cooked cochinita pibil, the Yucatán’s iconic dish of achiote-smothered, pit-cooked suckling pig. At Manjarblanco restaurant in Merida, Miriam shows us her take on classic panuchos, sopa de lima and queso relleno. Then, Rick brings some of the Yucatán back to Chicago, where he cooks papadzules and shows us how to make cochinita pibil at home — banana leaves and quick-pickled onions included.

Rick brings you out of the plush resorts and into the streets of Playa del Carmen, where street vendors and roadside stands serve real-deal Mexican food. Rick heads to Antojitos Yucateco for cochinita pibil tortas, then to nearby Las Karnitas for tacos of golden, crispy carnitas with spicy salsa. Then Rick follows the smoke to a little roadside cart, where crowds gather for cecina estilo Yecapixtla, thin-cut seared beef with grilled onions and nopales. At Le Chique, a modern dining room between Cancun and Puerto Morales, Chef Jonatán Gómez Luna dazzles Rick with feats of Mexican molecular gastronomy. Back in Chicago, Rick shows you how to execute the perfect taco party of your own, complete with slow cooker carnitas, summer squash and guero chile, and grilled achiote catfish with spicy habanero mayo.

The fertile waters of the Caribbean Sea provide exquisitely fresh fish, a bounty perhaps best translated on the plate through ceviche. Or sometimes you don’t even need a plate, like when Rick and Chef Juan Pablo Loza make a ceviche of freshly caught lobster on a boat in the Sian Ka’an nature reserve. At Catch, the Thompson Hotel’s swanky rooftop restaurant in Playa del Carmen, Chef Pedro Abascal teaches us to make a Peruvian-inspired mandarin, carrot, habanero and ginger ceviche with leche de tigre broth. Then, it’s off to nearby Axiote with Chef Xavier Perez Stone, who shows Rick how to make outrageously good coconut-shrimp ceviche. A delightful ferry ride brings Rick to picturesque Isla Mujeres, where young Chef Diego Lopez builds an absolute stunner of a dish, a ceviche of pargo with an herby green “mojito” broth. At Rick’s new Chicago restaurant, Leña Brava, he makes a deceptively simple aguachile in a cocktail shaker and teaches us to make a “Bloody Maria” coctel, complete with a spicy salt rim.

Hartwood, one of Mexico’s most in-demand restaurants, sits nestled between the crystalline beaches and dense jungle in Tulum. Here, Chef Eric Werner explains the fascinating farm-to-table supply chain that brings ingredients into Hartwood’s unique live-fire kitchen. The rustic simplicity inspires Rick to shop for produce and chiles in Playa del Carmen’s laid-back markets. Back in the funky kitchen of a Playa condo rental, Rick prepares poblanos rellenos with tatume squash and longaniza sausage, a beautiful grilled fish with avocado salsa and coconut bread pudding for dessert.

In Yucatán, cooking over fire is a way of life. Rick meets up with Chef Juan Pablo Loza, who ignites the wood-fire grill for octopus with local pineapple. At Zama Beach Club in Isla Mujeres, Cancun Chef Federico Lopez fires up his seaside grill to make tikin xic, a Yucatecan grilled fish dish smothered with achiote, the region’s hallmark spice paste. And Chef Eric Werner shows off his all wood-fire kitchen at Hartwood in Tulum. Forever obsessed with cooking over fire, Rick brings us to Leña Brava, his new all wood-fire restaurant in Chicago, to make poc chuc, a traditional citrusy grilled spicy pork dish, then to his backyard for spatchcocked chicken al oregano worthy of a summertime fiesta.

David Sterling, chef and author of “Yucatán: Recipes from a Culinary Expedition,” brings Rick on a whirlwind tour of the peninsula. The pair of Oklahoma-born, Mexico-obsessed chefs begin their journey with a conversation in Hunucmá, where Dõna Lupita serves home-cooked meals at the kitchen table of her family’s cocina económica. Though the Yucatán is not known for its bakeries, David brings us to the rustic wood-burning ovens at Panadería Liz in Merida. Then it’s back to the gorgeous kitchen at Los Dos Cooking School, where David makes a pan of buttery, indulgent hojaldras — a sweet-and-savory pastry stuffed with ham, cheese and chile and dusted with sugar. Inspired by all of the homey comfort, Rick makes a nourishing frijol con puerco and a hojaldra all his own.

#1108 — The Splendor of Yucatán’s Enchanting Markets

Revered by his Mexican peers, Federico Lopez is one of Mexico’s most affable and talented chefs. He joins Rick at the enchanting Mercado Municipal in Valladolid to extol the virtues of unique Yucatecan produce. After that, the pair head to Temozón, to a decades-old meat market where they smoke pork in rustic ovens behind the store. With a basket full of market produce and smoked meats, the chefs return to Federico’s sleek catering kitchen in Cancun, where Federico artfully recreates the market in a salad of local beans, squash, heirloom tomato and chile dulce. Federico also makes pork tenderloin with longaniza sausage and beans. Back in Chicago, Rick makes lima bean soup with ham hock, plus pork lomitos.

If you could define the singular challenge facing Yucatecan chefs, it’s about honoring the past while pushing forward. Perhaps no one is more emblematic of the effort than Pedro Evia, co-owner of Ku’uk, a molecular fine dining palace housed in a restored Merida mansion. Rick and Pedro start their day talking tradition over tacos at Wayan’e, a busy family-run taco stand in Merida. Then, Pedro invites Rick to his home, where Pedro and his mother make traditional sopa de lentejas. At Ku’uk, Pedro shows us his ultra-modern take on the same dish. Back in Chicago, Rick makes recado negro to complement cured duck. At home, he makes tacos with eggs and burnt habanero salsa, avocado and red onion — the perfect chef’s late-night snack.

Belgian-born chocolatier Mathieu Brees brings Rick deep in the jungles of Ticul for a tour of cacao groves. The serene setting is the backdrop for a complete bean-to-bar chocolate education, with Mathieu, Rick and the plantation’s caretaker tromping around the lovingly farmed cacao fields. Then, Rick and Mathieu head to the Ki’ Xocolatl chocolate factory in Merida. Still daydreaming about all of that chocolate, Rick makes a trio of cacao-inspired dishes, including a chocolate cake with candied ancho chile, red mole with chocolate and a cocktail featuring macerated cacao and chile-infused tequila.

Chef Pedro Abascal is changing tourist’s perceptions of the food in Riviera Maya, using local farms to supply his hip hotel restaurants. Rick and Pedro discuss his challenges and successes of his approach over a traditional Yucatecan meal at Faison y Venado. Rick pays a visit to a lamb farm in Tizimín for a conversation with a rancher, then heads to C-Grill, Pedro’s hip restaurant on the shores of Playa del Carmen, where he makes a beautiful roasted lamb in adobo. In Chicago, Rick heads to the outdoor Green City Market to gather ingredients for his grilled leg of lamb with green garlic mojo and camote mash, accompanied by grilled asparagus with pasilla crema. Oh, and an incredibly delicious skillet cake.

Cooking in underground pits is an elemental part of Yucatecan cooking. In fact, it’s downright sacred, as we’ll see during the preparation of mucbil pollo at an intimate candlelit Hanal Pixan ceremony (think of it as the Yucatán’s version of Dias de Los Muertos.) Rick heads to Yaxunah to see the entire process of making cochinita pibil, from the digging of the pit to the garnishing of the tacos. Rick also visits the smoky ovens in Temozón, a village known throughout Yucatán for its purveyors of smoked meats. Then, he places a big order at Momocoa, a Southern-American-slash-Yucatecan barbecue joint in Merida run by Chef Paloma Ponce. All of the smoke stokes Rick’s inner pit master, so back in Chicago he makes short ribs with ancho BBQ sauce and pollo pibil.

The salt marshes of Celestun and a seaside octopus farm are unlikely places for a chef to get inspired. But Chef Roberto Solis’ approach to food has always been a little different — just see the menu of his revered restaurant Nectar in Merida, which continues to charm and dazzle. In Nectar’s kitchen, Roberto shows Rick how to make three of his restaurant’s favorite dishes: cebollas negras, poc chuc de pulpo and deeply satisfying crispy, seared pork belly with grilled pineapple and tomatillo. At home, Rick prepares tostadas of charred octopus and escabeche, plus a succulent slow cooker red chile pork belly with braised kale. To finish it off, Rick makes manjar blanco, a traditional Yucatecan coconut dessert.