Architect Robert Adam: A Place at the Table host Geoffrey Baer and the show’s production crew spent a week in the United Kingdom to explore the life and work of classical architect Robert Adam. They spoke with Adam’s friends, associates, and clients in London, Hampshire County, and Glasgow. They toured some of his stately buildings as well as a mixed development he designed near a historic village. And they spent time with Adam himself: at his firm, on the road, in his home, and around his work.

Geoffrey Baer recalls the trip, the characters he met, and even some of the food he ate. 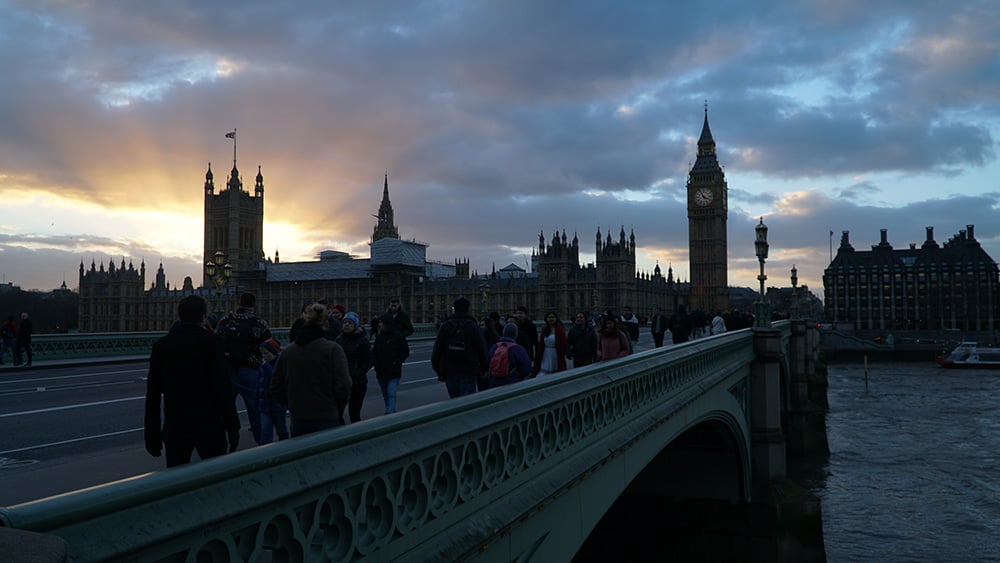 Could there be a more dramatic image of the grandeur of England? This is the country in which Robert Adam works, and while his own buildings may not be as iconic as the Houses of Parliament and Big Ben, they comfortably update and revive the long history of which this landmark is a vivid part. 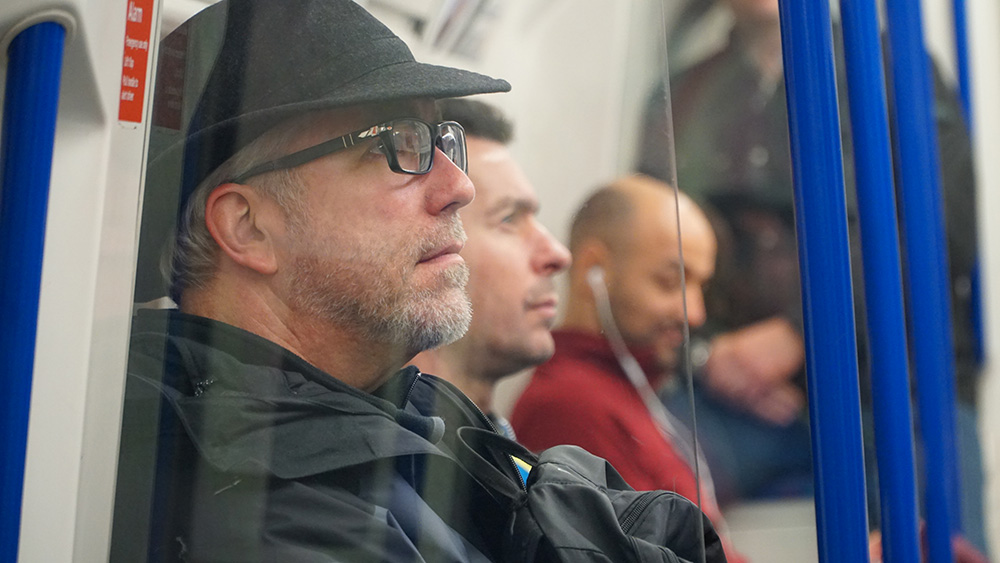 This is Tim Boyd, our very gifted director of photography. In addition to working closely with producer Dan Andries and the crew to light and compose gorgeous images and scenes, he is also responsible for schlepping a dozen or so boxes of camera gear, and often, driving the van. Then, long after filming is finished, he is hard at work in his hotel room transferring all of the day's priceless footage to hard drives and preparing the gear for the next day. I prefer my job – no schlepping required! 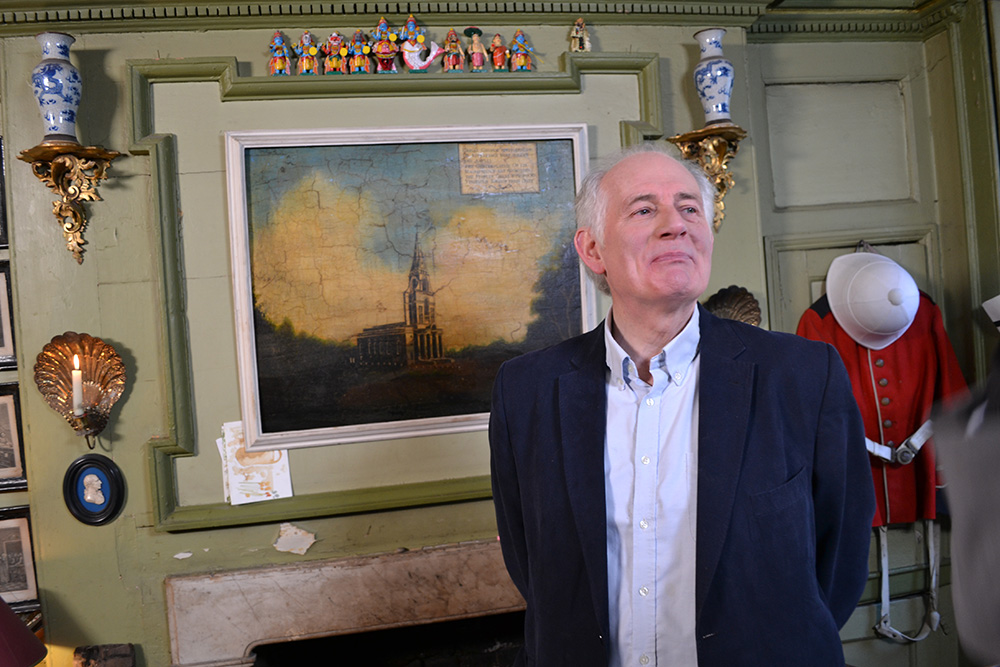 Adam’s circle of friends and associates includes some real characters. We met a lot of them while filming, and Dan Cruickshank is one of the most quirky and compelling. He he has a similar job to mine: Cruickshank has appeared on various television shows about Britain’s history and buildings, as well as about architecture around the world. He also writes about architecture and was an early champion of Robert Adam’s, which is how they became friends. 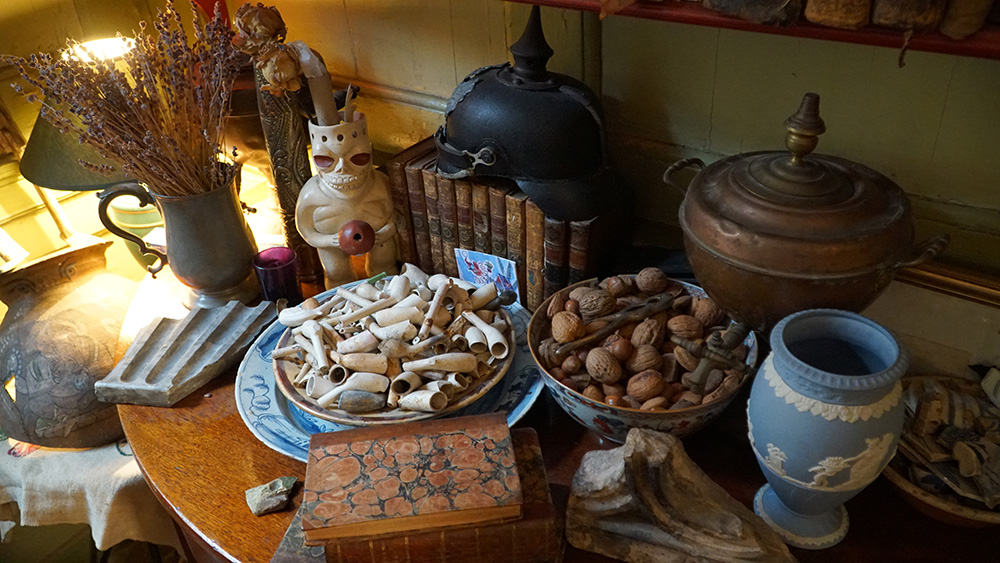 Cruickshank lives in an extraordinary and slightly dilapidated house from 1730 in the London neighborhood of Spitalfields. He is obsessed with the history of London, collecting artifacts such as salvaged antique cornices and these clay pipes, which men used to discard along the Thames. 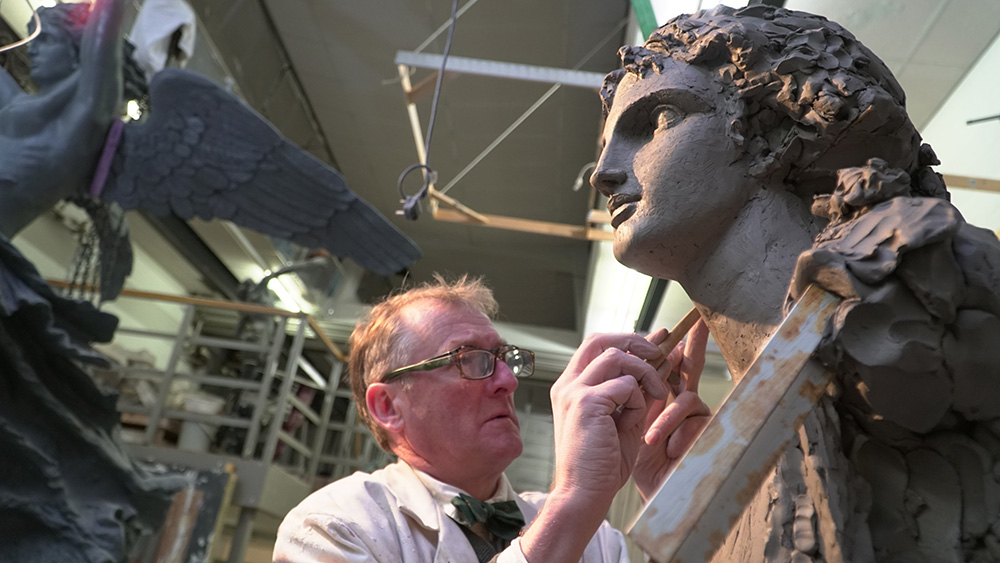 Even more of a character than Dan Cruickshank is Alexander “Sandy” Stoddart. A sculptor who has contributed decorative work to several of Robert Adam’s buildings, Sandy is a fiery Scot and ardent polemicist on behalf of classical art. I couldn’t get enough of his wit or his studio, and I wish we could have included more of him in the documentary. 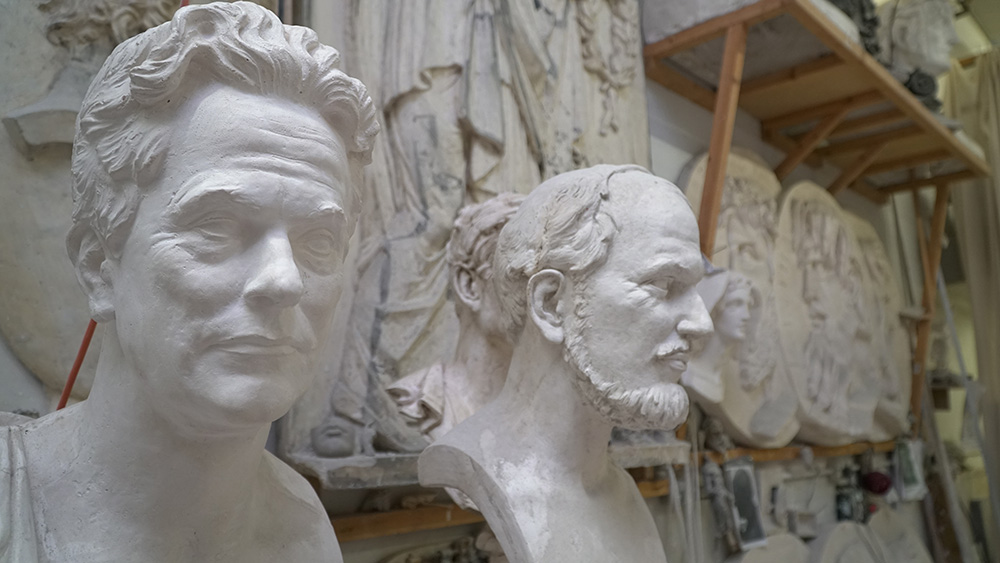 Amongst the completed plasters and half-finished figures in Sandy’s studio are busts of the architects with whom he has collaborated, including this one of Robert Adam, which he joked should be in every household. 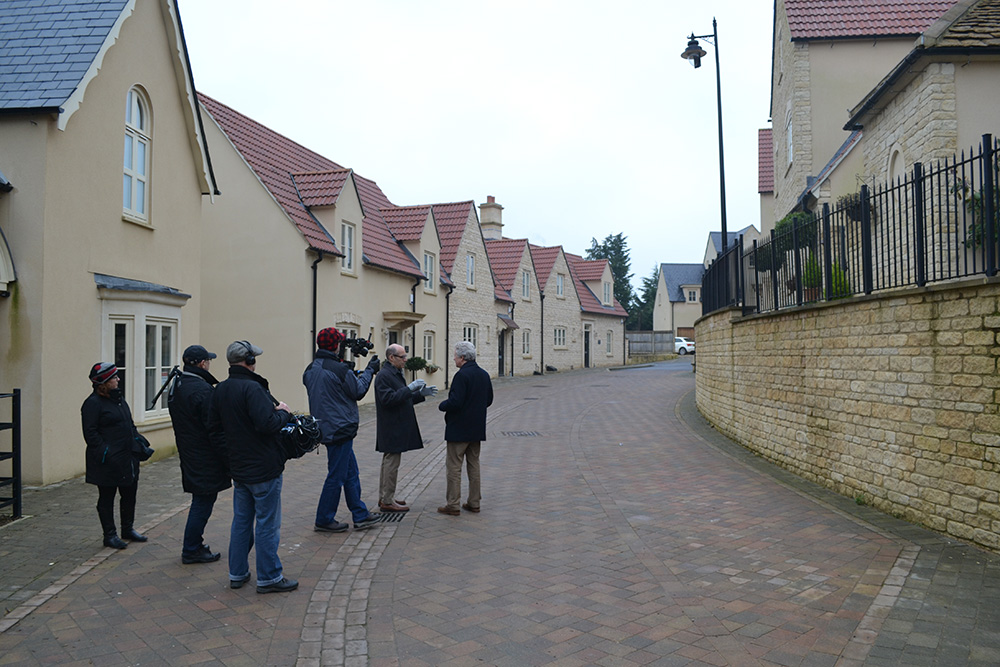 Adam not only designs buildings, but urban spaces as well. He showed us around his Fortescue Field development, which is in an ancient town called Norton St. Philip. The development references details from the town and is built from local materials, so that Adam’s buildings and design rest comfortably near their historic counterparts. 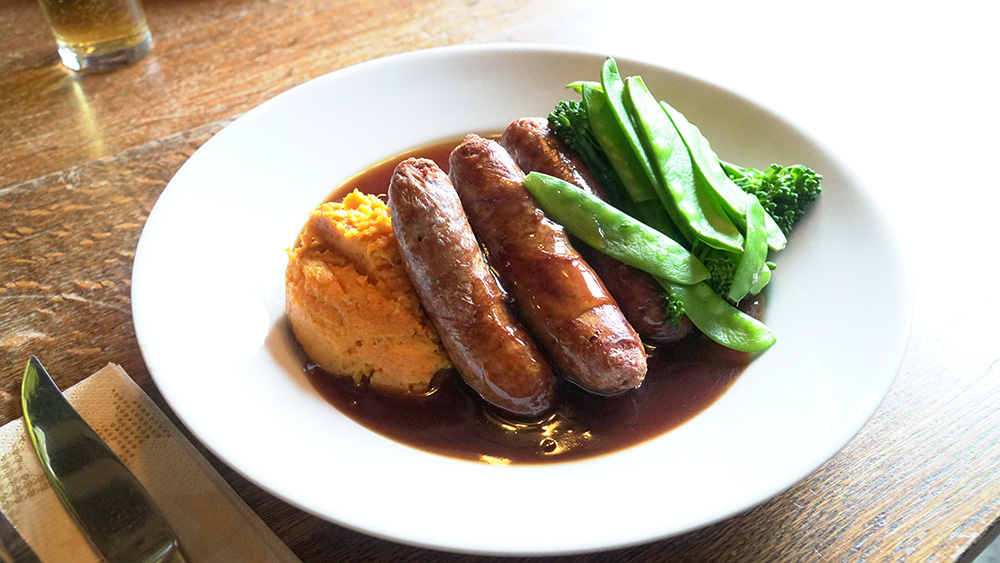 While in Norton St. Philip, we ate at the George Inn, which claims to be England’s oldest. I had wild boar sausage. How could I not take a picture of that? 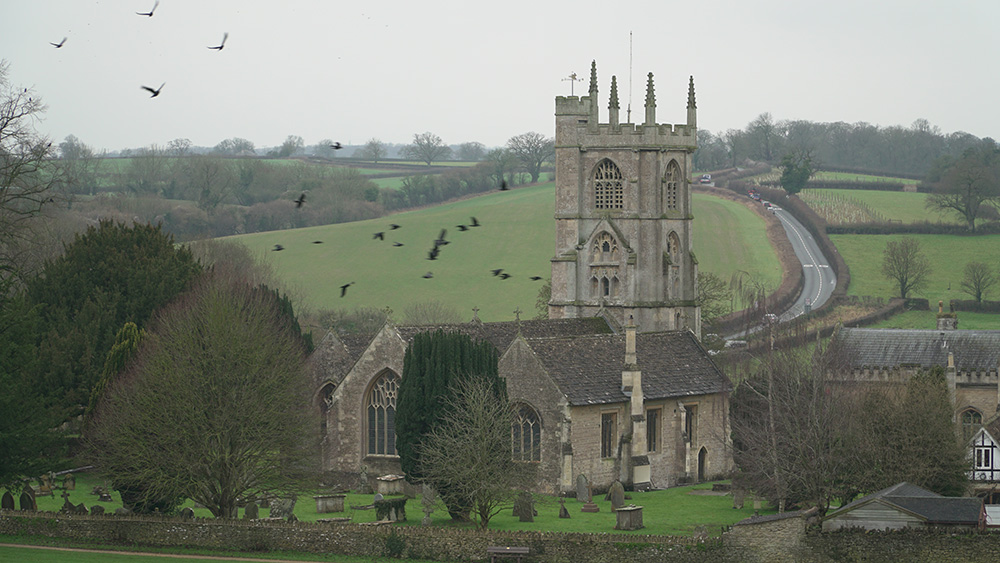 In a small valley behind the George Inn sits the Church of St. Philip and St. James, parts of which date to the 13th and 14th century. 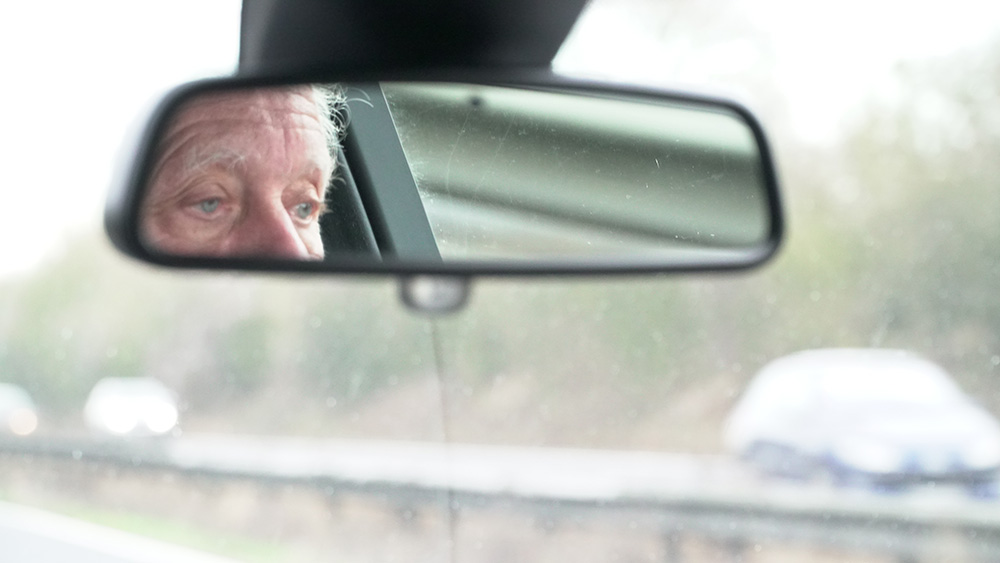 I really enjoyed spending time with Robert Adam. He is extremely warm and has a big laugh. I met him on our first day in London, before we started filming. We went to one of the clubs he belongs to and had a meal in a fusty old room that probably hasn’t changed since 1850. He simultaneously enjoys the long history of this kind of place and sees it with a wry sense of humor. Here’s a great example of that: after lunch, he brought me upstairs to the library for a drink. While we sat in some cliché stuffed chairs before the fireplace, he showed me two little wooden boards nailed into a T-shape. “These are gout stools,” he explained. So when you sat up there with your brandy and cigars you could rest your legs next to the fire to ease your gout. Adam had a nice chuckle as he described this to me. 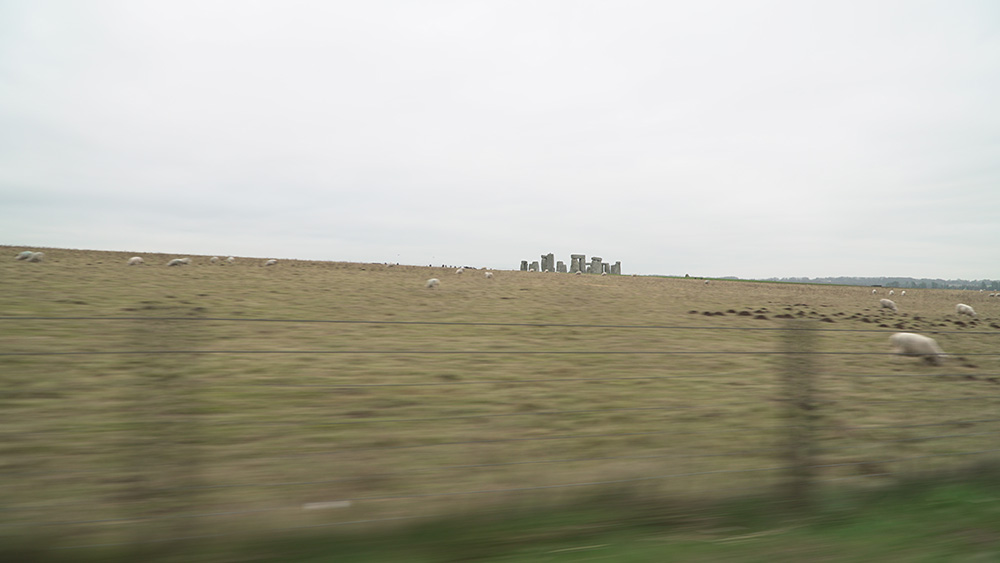 We were just driving along a country road one day, and something caught my eye. Hey, wait a minute… isn’t that… Yes! There’s Stonehenge! 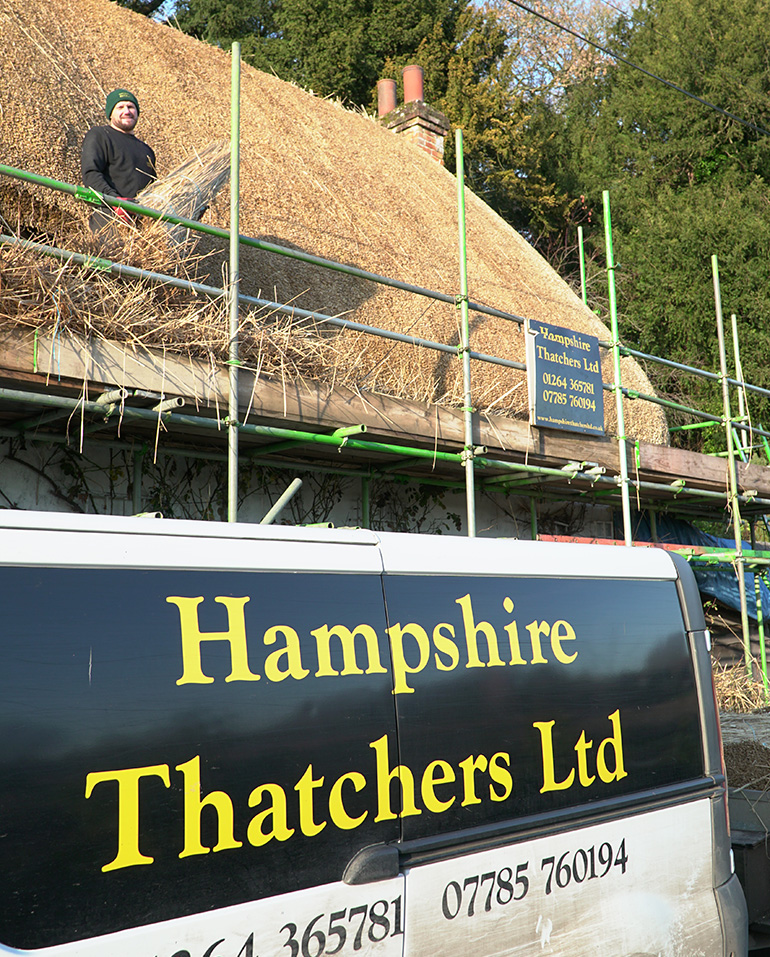 Another quintessentially English country sight off the side of the road. We’re not too far from London, and many of these people have thatched roofs. So if your roof needs fixing... call Hampshire Thatchers! I wonder if they do cheesy TV commercials like roofing companies here.

One thing that attracts Adam to classicism is its potential for the communication of specific meaning. For instance, the tops of some columns in his firm’s office. The snake and apple allude to the Garden of Eden, a clever reference for a firm called ADAM Architecture. 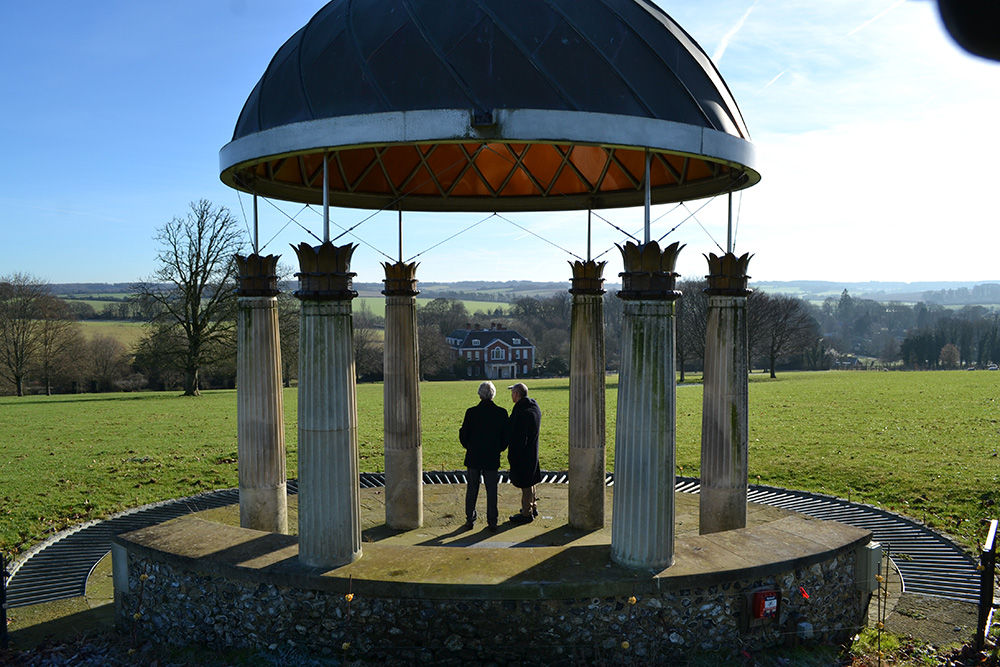 Adam has said this Millennium Pavilion was probably the most important thing he’s done. Which surprised me, since he’s done so many large and high-profile projects. So why is this tiny structure his most important? Because it encapsulates his belief that classicism is also modern. Under the “rules” of classicism, a column is supposed to support something. But here the dome floats above the columns, which would be impossible without modern-day high-tech engineering. It’s kind of an inside joke on classicism, a celebration of it.

I thought it was so clever. It didn’t take a lot of explaining, and you could really get what he was trying to do when you saw it. I would love to sit there in that lovely setting and enjoy the spectacular view of the English countryside. 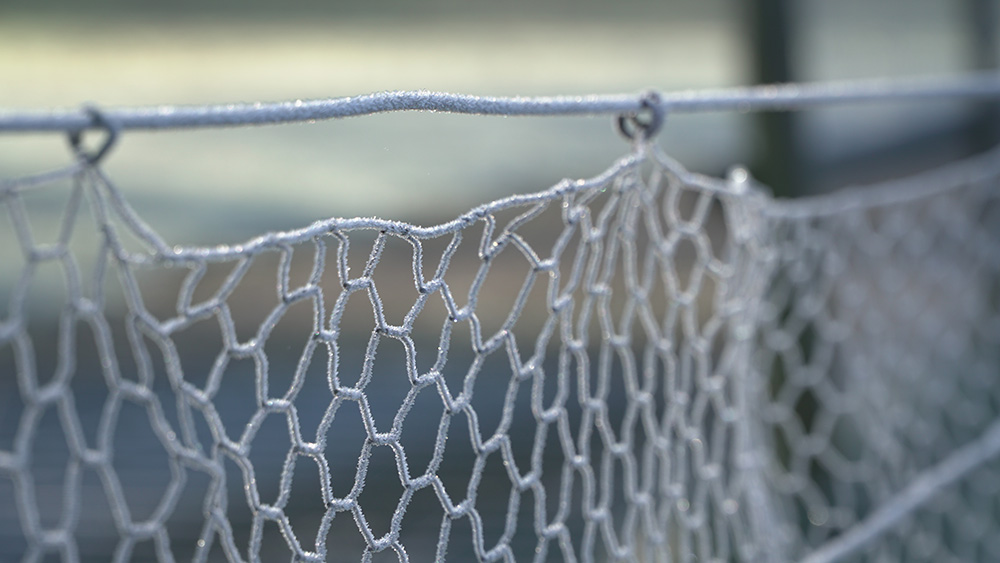 It's a bit chilly in that countryside in early January. This was taken near Adam’s "Arts and Crafts" House, which is near the Millennium Pavilion in Hampshire County: Downton Abbey country, where some of the wealthiest people live, in sprawling grand estates. 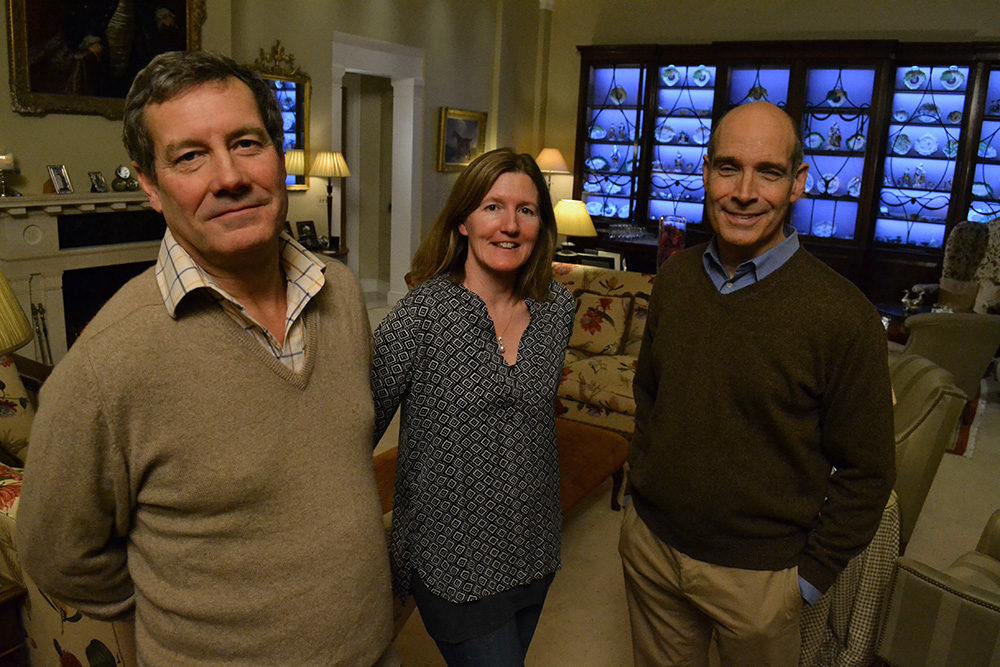 Adam has designed several modern-day Downton Abbeys, and we visited one of the more modest ones (if a house that has eleven bedrooms and a dining room meant for twenty people can be called modest!). We toured the house with its owners, the Everetts. They were very warm and down-to-earth, but absolutely unashamed about talking about their social class. They sort of coached me on how people interact in their world: it's vulgar to call the sitting room "the lounge," or the bathroom "the toilet." 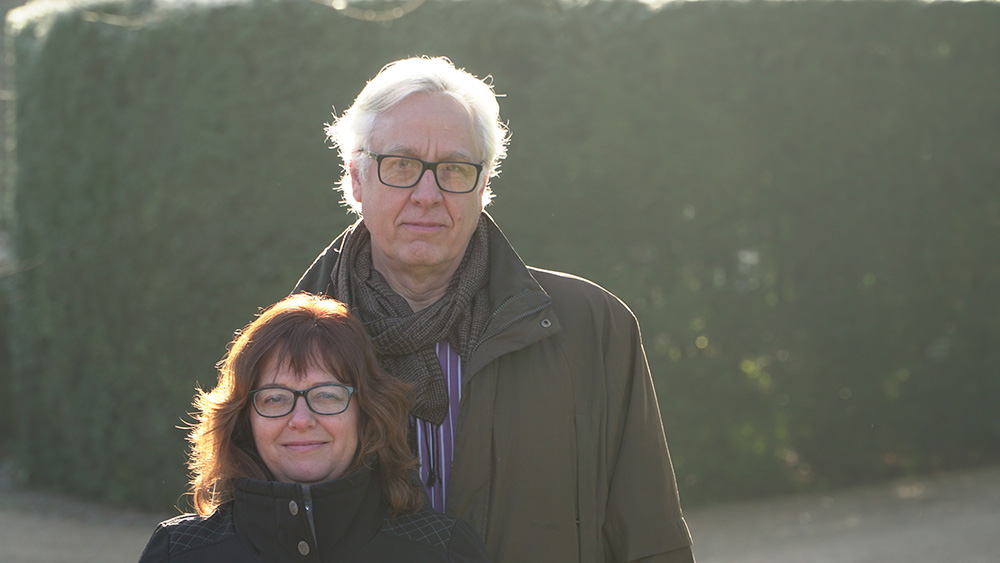 Obviously, putting together a show like this is a collaboration. I couldn’t ask for better colleagues and travel companions than the producers Dan Andries and Liz Reeves. Dan is a filmmaker’s filmmaker. He envisions the whole show, poring through mountains of research and distilling it for me into digestible pieces. He “casts” the show, deciding who we’ll interview, and we work together to prepare interview questions. He has the most annoying quality of being able to read copious amounts of material and remember everything, which is not me --: I forget everything as soon as I’m done. After we’ve filmed these extensive interviews, he slogs through every frame of the footage to find the gems buried in our conversations, and the most beautiful visuals to tell the story. We collaborate on scripting and he oversees the entire editing process.

Dan and I have collaborated with Liz on many projects. She has an uncanny ability to bond with the people we'll be interviewing and who will be helping us make all the myriad arrangements for filming. And she offers deep insights into the content of the story, serves as a sounding board for Dan and me, and collaborates on the writing. She also serves as a mother hen, keeping all of her scattered creative types in line and on task.

This show had an incredibly short turn-around time. It had to be finished just two months after our return from England. Between everyone's dedicated work (and especially long, long days and weekends from Dan and Liz), it all came together beautifully.