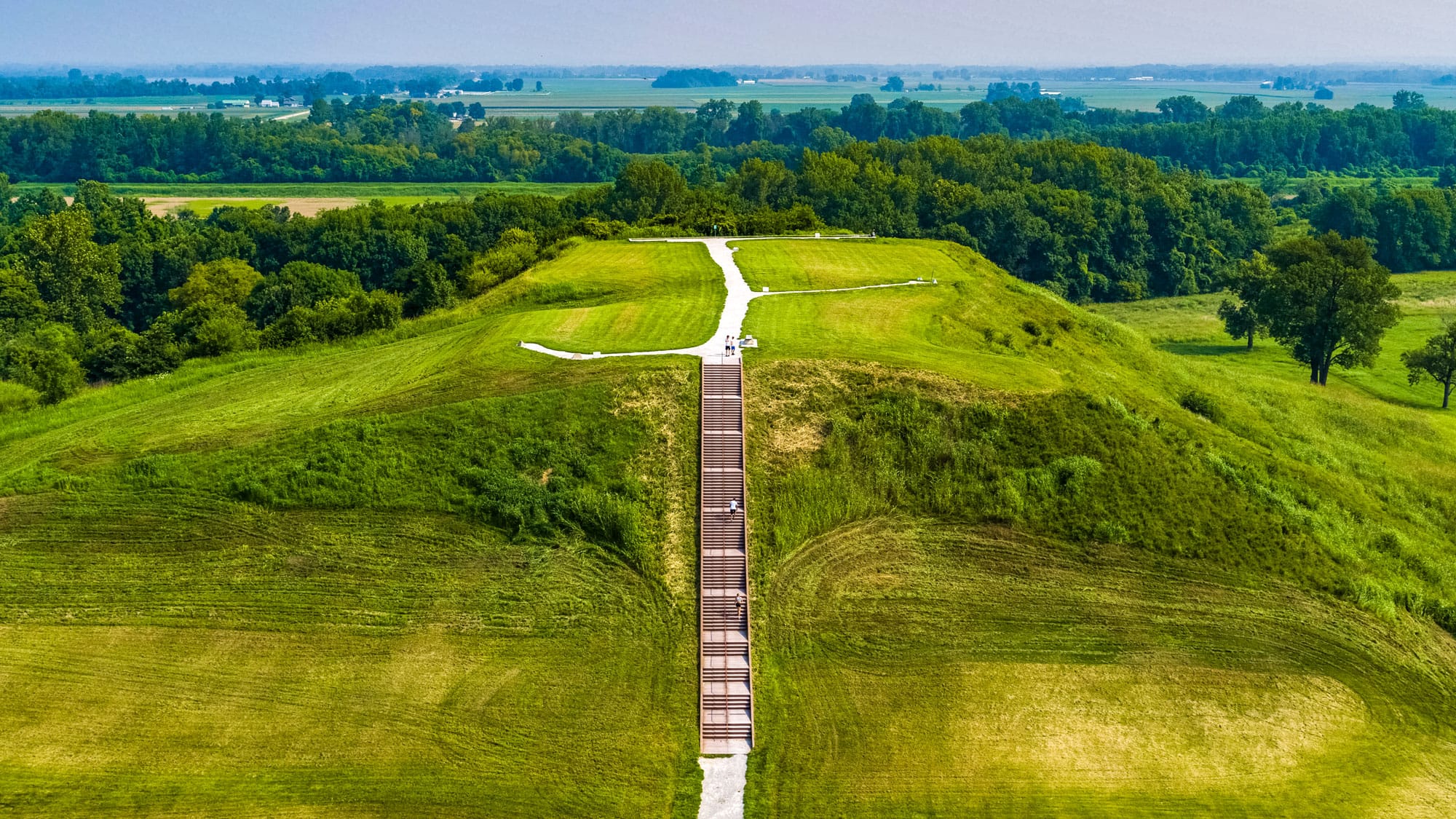 The busy streets of London, Paris, or Rome often come to mind when thinking of the big cities of the Middle Ages. But one of the largest and most complex societies of roughly that same time period was Cahokia, a Native American society sitting squarely in the middle of the United States.

Located in present-day Collinsville, Illinois near St. Louis, the city that is now known as Cahokia was the largest pre-Columbian settlement north of Mexico, according to UNESCO. The city’s original name is unknown. It was later named Cahokia for a tribe of the Illiniwek Confederacy who lived near the mounds in the eighteenth century when French explorers came to the area.

During the Mississippian Period (about 800 to 1400), the sprawling city of Cahokia was a complex agricultural society. With 120 mounds, the city originally covered approximately 6 square miles.

“There were lots of other, smaller communities around these mound centers, as well,” said archeologist Bill Iseminger, former assistant site manager at the Cahokia Mounds State Historic Site. “So it was basically a metropolitan area.”

At its peak between roughly 1050 and 1150, Cahokia was the largest urban center for the Mississippian people, a Native American civilization made up of many peoples that spanned from the Upper Midwest to the Gulf of Mexico and to the Appalachian Mountains. Anywhere from 10,000 to 20,000 people lived in Cahokia, making it larger than London during the same period.

“Cahokia probably grew to its great size because of its location near the confluence of the Mississippi, Missouri, and Illinois rivers, which provided lots of communication and travel around trade routes,” Iseminger said.

Monks Mound was the largest mound in Cahokia and was once topped with a building the size of a basketball court. Photo: Colin Hinkle / WTTW

Though the people who lived there left no written record, the mounds that are still intact today have given archaeologists and historians much to study. At the site in Collinsville, there are 120 mounds, plus an additional 75 mounds in other parts of the St. Louis area. They are made entirely of earth, dug with stone hoes and transported on people’s backs using baskets.

That would have been an impressive feat, considering the largest mound, Monks Mound, stands 100 feet high, 1,000 feet wide, and contains different levels. There is evidence that there was once a building about the size of a basketball court atop Monks Mound.

The purpose of the mounds, including Monks Mound, was usually hierarchical in nature — a physical way to elevate someone of high status. According to Iseminger, on the flat top of the mounds were buildings where leaders lived or ceremonies took place. That basketball-court-sized building on Monks Mound could have been where the paramount chief lived or where council members might have met.

“It was sort of like the White House of its day,” Iseminger said.

Not far from Monks Mound is a group of wooden posts arranged in a circle. Uncovered by an archeologist during a dig in the 1960s, this “Woodhenge” site is thought to have been a type of calendar or place to observe the sun, since some of the posts align with the solstices and equinoxes.

Iseminger said the posts were rebuilt at least five times during the Mississippian Period. (The wooden posts visitors can see on the site today are a reconstruction of the third iteration of the circle of posts.) Each time it was rebuilt, it was expanded to include 12 more posts. Why that was done is unknown, but Iseminger said it may have been to include holidays, rituals, or festivals that were added to their calendar over time.

“Like any city today, we do a lot of rebuilding and renovation.” Iseminger said. “It’s interesting that they were doing the same kind of thing.” Massive earthen mounds provide clues for a Native American city that was once the largest pre-Columbian city north of Mexico.

Cahokia began to gradually decline after 1200. By the mid-1300s, the city had been abandoned. Though no one knows exactly why such a large city became a ghost town, there are some theories. Iseminger said it probably was a combination of social, political, and environmental factors.

It’s possible that with such a large population, resources eventually became scarce as forests and farmland were used up and water became polluted. With its proximity to the Mississippi, Missouri, and Illinois rivers, frequent flooding could have also brought about Cahokia’s demise. Around the time of the city’s decline, there was also a global cooling period known as the Little Ice Age that may have made resources even harder to maintain as droughts and extreme weather impacted Cahokia, its crops, and the animals it relied on.

Competition for food, shelter, and other goods may have led to conflict and war, and Iseminger said it’s possible the city had one or more bad leaders who did not help matters.

Today, the Cahokia Mounds State Historic Site and Interpretive Center is working to create an augmented reality experience that would allow people to use their smartphones or other devices to “see” what a building or other structures might have looked like at Cahokia’s peak. The goal is to allow visitors to experience first-hand the complexity and importance of the lost city, which is now a UNESCO World Heritage site.

“Cahokia is recognized as being important to basically all of mankind, not just the United States, because it represents a culture and tradition that was certainly very complex and highly organized,” Iseminger said. “It gives us a broader picture of what life was like here in America before the Europeans arrived.”