“Every Hour Brings Something New”: A History of Mississippi River Commerce | Beyond Chicago from the Air 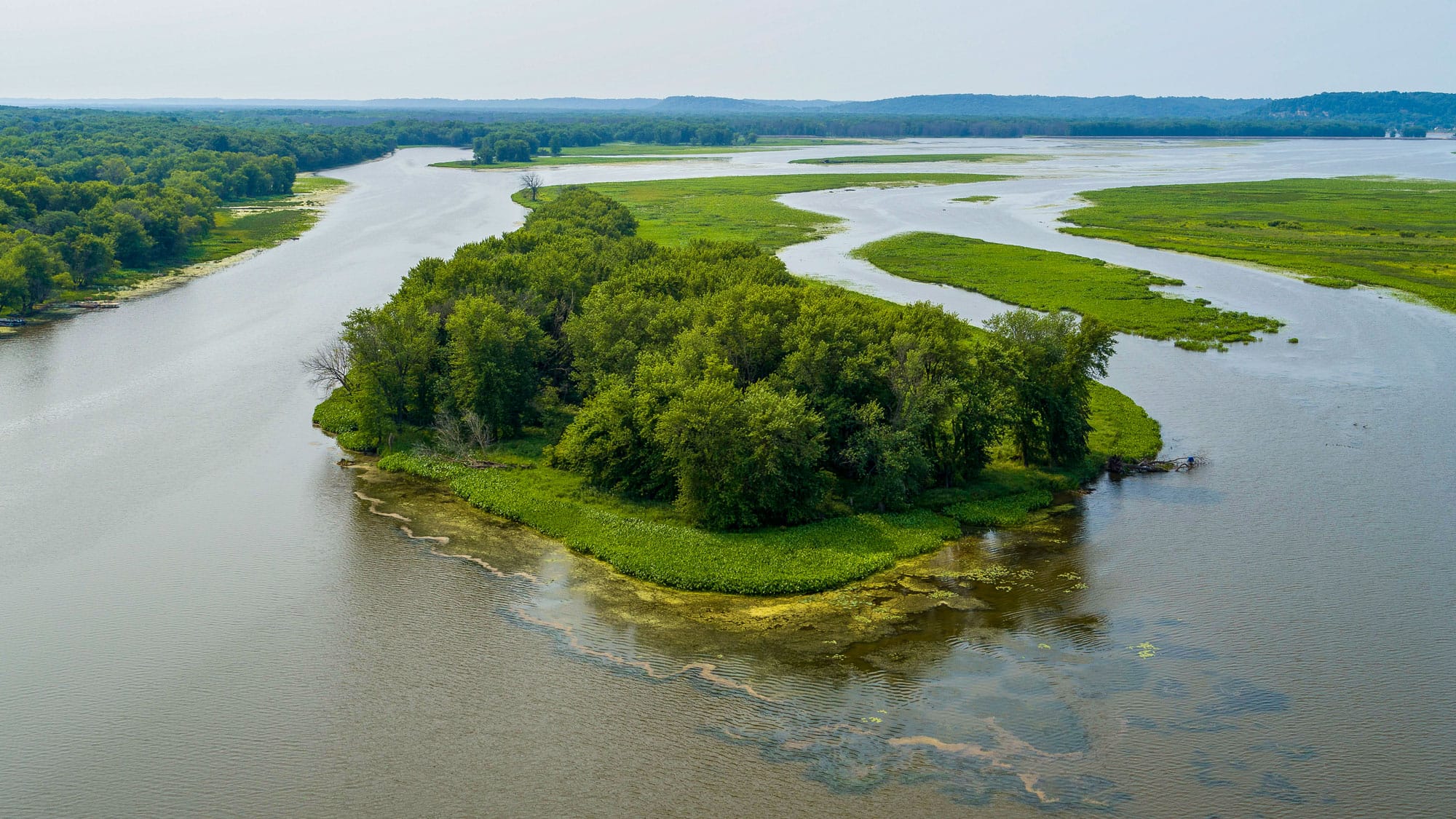 “Every Hour Brings Something New”: A History of Mississippi River Commerce

During the middle of the nineteenth century, as steamboats carrying freight and passengers chugged up and down the Mississippi River, boatmen measuring the depth of the treacherous river would cry out “mark twain” to let the boat pilot know the water was two fathoms deep — in other words, safe enough to pass.

An old riverboat captain used the phrase as a pen name on short reports about the Mississippi in the New Orleans Picayune. When a young man who had himself worked on a steamboat wanted to write for a newspaper, he submitted an elaborate mockery of the captain’s writing. After the old man died, his young parodist, being “a fresh new journalist [who] needed a nom de guerre … confiscated the ancient mariner’s discarded one.”

Thus did Samuel Langhorne Clemens become Mark Twain. As a boy growing up just across the Illinois border in Hannibal, Missouri, “There was but one permanent ambition among my comrades in our village on the west bank of the Mississippi River,” he wrote in Life on the Mississippi. “That was, to be a steamboatman.”

The time during which Clemens lived on and plied the Mississippi was the bustling peak of the steamboat trade along the river. By 1880, ever-expanding railroad networks would surpass steamboats as the main engine of commerce.

But traffic along the Mississippi still continues in earnest today: barges move approximately 175 million tons of freight annually along the upper Mississippi through a series of 29 locks and dams, according to the National Park Service. Measured in tonnage, the largest port district in the world is the Mississippi River delta in Louisiana. The U.S. Army Corps of Engineers maintains a 9-foot-deep shipping channel from Minneapolis, Minnesota all the way down to Baton Rouge, Louisiana. 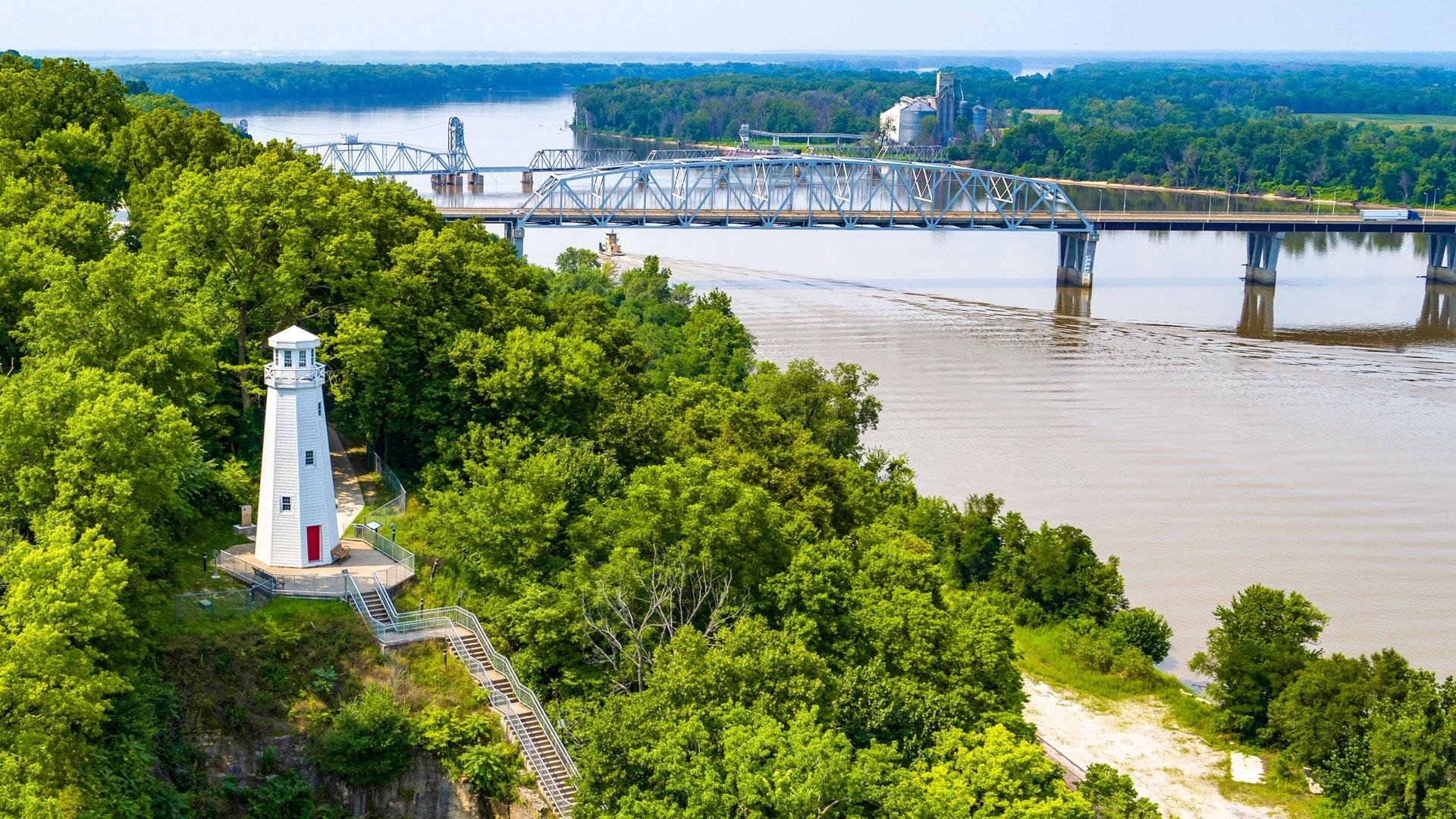 The Mississippi River shaped commerce in the midwest and beyond – and helped Chicago become an important trading hub.

The Mississippi wasn’t always so easily navigable by large ships. Before Europeans arrived and Americans began to reshape the river to their needs, it was an integral part of the existence of Native Americans living near it. “It was their front and back yards,” the National Park Service’s history of the river states. “It was their supermarket as well as their superhighway. They fished, hunted, gathered plants, planted crops, swam, and prayed in or near the river.”

In 1673, the French missionary Father Jacques Marquette and French-Canadian explorer Louis Jolliet set out to search for the Mississippi, which many Europeans hoped would turn out to be a Northwest Passage leading to the Pacific Ocean. Marquette and Jolliet were the first Europeans to “discover” the river.

They were also partly responsible for the later explosion of commerce on the Mississippi by realizing, thanks to a tip from the local Miami people, that a portage between the Chicago and Illinois rivers could connect the Great Lakes to the Mississippi and thus the Gulf of Mexico. Almost two centuries later, the Illinois and Michigan Canal would do just that, allowing Chicago, perfectly situated at the portage, to thrive.

For the next century and a half, European fur traders — French, English, and Spanish — spread out through the region. The French built trading posts on the upper Mississippi; later, John Jacob Astor’s American Fur Company would take control of the trade as Americans began moving in following the War of 1812. In 1819, Americans began building a fort at the confluence of the Minnesota and Mississippi rivers, the site of present-day Minneapolis.

Native American peoples, predominantly the Dakota people, still inhabited the regions around the upper Mississippi. They traded with Europeans and Americans. One Dakota settlement near present-day St. Paul even took tolls from traders on the river, according to the report of an early American engineer. But the fur trade had devastated local game populations, forcing changes in the Dakota lifestyle. In the 1850s, they were removed from their land along the Mississippi River by coercive treaties with the United States.

The river was much more difficult to navigate then, full of rapids, islands, shifting sandbars, fallen trees, and shallow stretches—hence the calls of “mark twain.” “Along the Upper Mississippi every hour brings something new,” Twain told the Chicago Tribune in 1886. “There are crowds of odd islands, bluffs, prairies, hills, woods and villages—everything one could desire to amuse the children.”

The first steamboat navigated the upper Mississippi in 1823, and river commerce grew exponentially after that. Much of it was centered around the town of Galena, in the northwest corner of Illinois near Iowa and Wisconsin, and many of the steamboats carried lead. (Galena is a form of lead ore.) 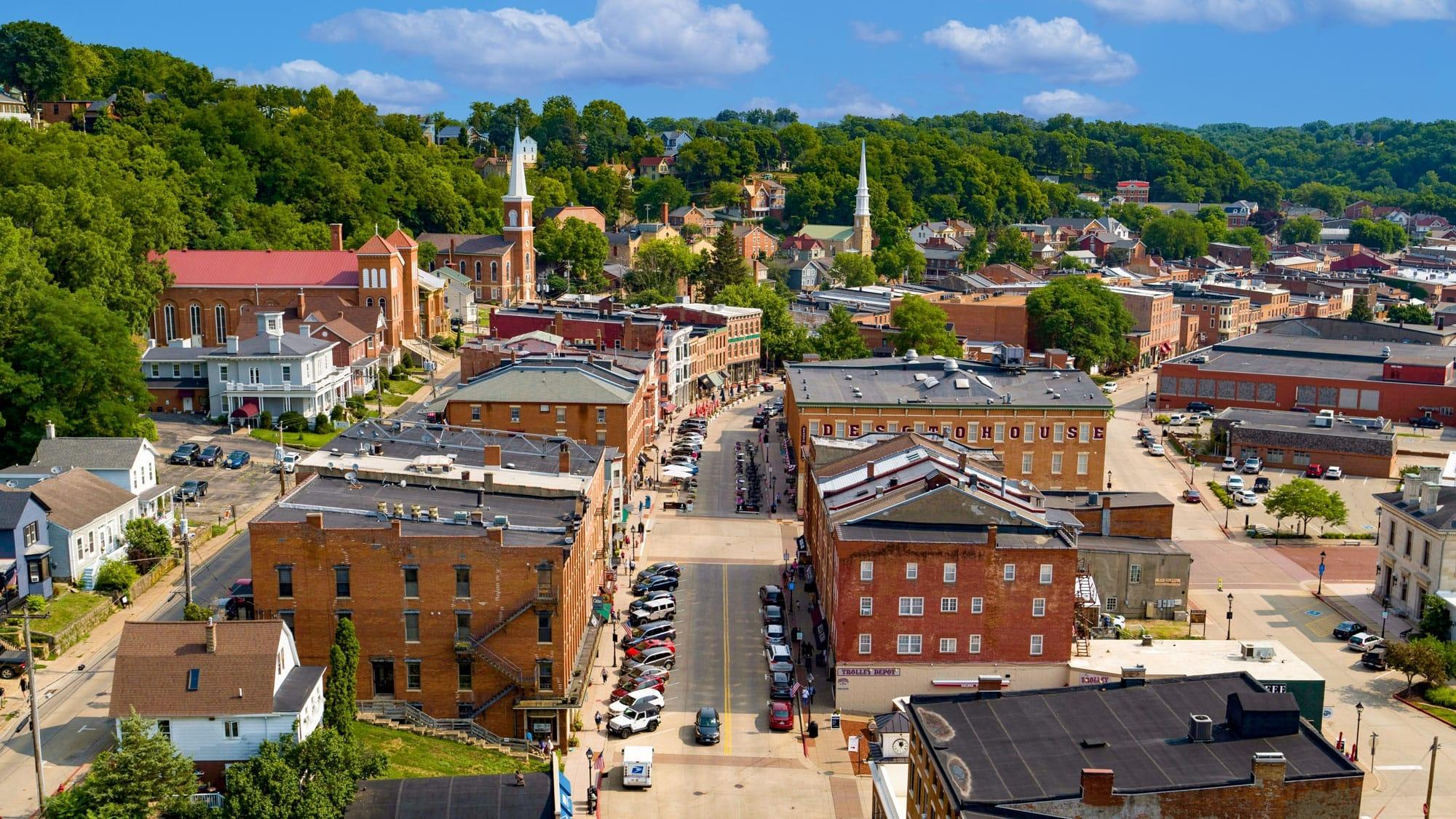 Galena, Illinois was once a lead mining town. After being mostly abandoned, it was restored in the 1970s and is now a popular tourist spot.

Around mid-century, river traffic along the upper Mississippi really flowed: by 1857, 1,000 steamboats were arriving in St. Paul a year, according to the National Park Service’s history. The population of states along the upper Mississippi exploded in the 1850s. After the Civil War, the federal government turned its focus to infrastructure, and the Army Corps of Engineers began shaping the river to make it more navigable.

By then, railroads were already beginning to overtake river commerce. (That shift also helped Chicago, a hub of railroads, become the dominant trade center of the American West.) The first railroad bridge over the Mississippi opened at Rock Island, Illinois in 1856. Just days after it was completed, part of the bridge was destroyed in an accident involving a steamboat collision. Abraham Lincoln defended the railroad in the high-profile court case that resulted, winning both the case and fame before becoming president. 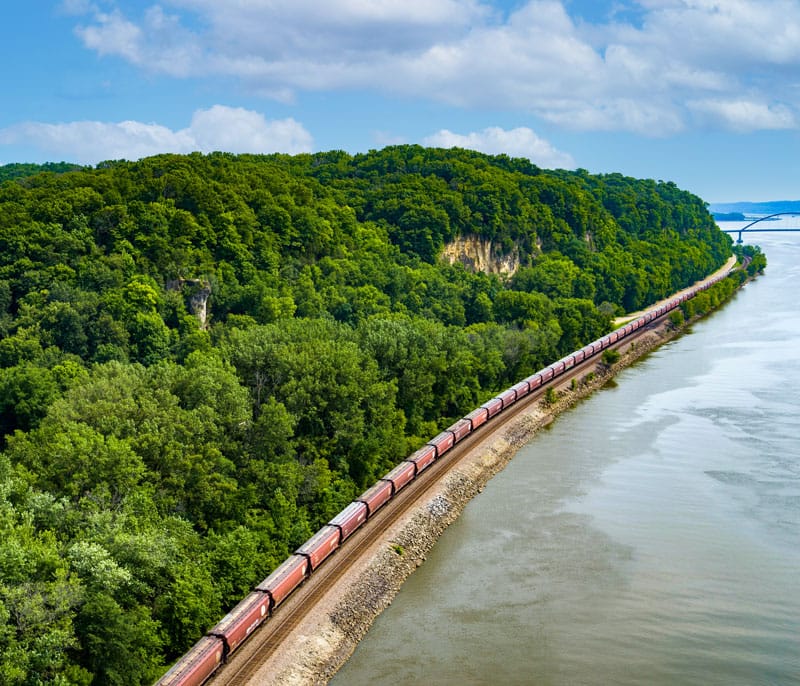 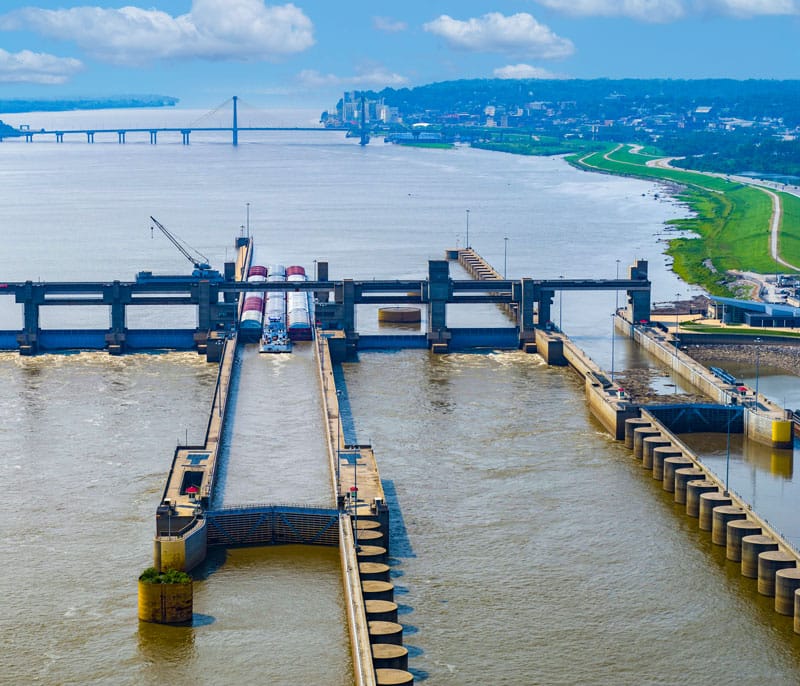 The river continued to enable commerce. Timber shipping dominated in the latter decades of the nineteenth century, with most river settlements boasting a lumber mill powered by the river. The limestone bluffs along the river such as those at Mississippi Palisades State Park in northwest Illinois, as well as gravel beds and clay deposits, fed quarries, brickyards, and kilns for quicklime, which was used in mortar and fertilizer. And the river supported agriculture, particularly wheat and flour mills, but also potatoes, corn, wool, dairy, stockyards and meatpacking, and breweries.

The federal government also continued to commit resources to improve traffic flow upon the Mississippi with locks, dams, and dredging. As the National Park Service puts it, “Between 1907 and 1963 most semblances of the natural river would disappear.” Whereas once people could occasionally wade across the river at certain sections during drought, the Mississippi no longer ever reaches its natural low-water level.

Despite the influence of human commerce, the Mississippi remains a natural highway for other forms of life. Every year, 326 species of birds—60 percent of all those in North America—follow it during their migration. At least 260 species of fish, a quarter of the species in North America, live in the Mississippi. Forty percent of the continental United States drains into it. Water that leaves the river’s origin at Lake Itasca in Minnesota takes about three months to travel its 2,350 miles and reach the Gulf of Mexico.

Despite the fur trade’s devastation of ecosystems, the steamboat and barge traffic, the lumber milling and limestone mining, and bridge-building and dam construction, it is nature that still dominates on the Mississippi.