To capture the story of architect Pier Carlo Bontempi, our WTTW video crew, along with host Geoffrey Baer, traveled from Chicago to Paris, to Milan and Parma – with several stops in between.

Via planes, trains, and rented vehicles, they moved themselves (and a large amount of video gear) around Europe to see first-hand how Bontempi and his peers have been working to elevate the status of traditional architecture and urban planning.

In this travel diary, Producer Dan Andries shares some of his impressions of the trip.

Lost, without a map.

Lost, in big cities, small cities, old cities, between cities. Lost at the roundabout. Lost on the Autostrada. Lost at night. Lost in the afternoon. Lost at noon, lost after breakfast. Sometimes we needed to be heading back in the direction we came from. And sometimes we probably really just needed to go to sleep as soon as possible. We were lost. Lost in Europe.

It is a good analogy for the story of four American TV people abroad armed with the worst of navigating tools – GPS and cellphones, all with international data that didn’t match. Imagine sending a text that arrives 45 minutes later to someone 15 feet from you.

But we were also Chicagoans, a city known as one of the most modern on earth, traveling to Europe to talk with a traditional architect who didn’t speak English, and of whom we had truly the most basic understanding, as not a lot has been written about him.

And in this way too we were lost, without a map. And no GPS or cellphone was going to help us navigate the thoughts and work of a man who grew up in a very different world than ours.

We were going to have to be willing to be beginners.

There are two quotes I’ve been hanging on to throughout the entire production.

One from a friend of Franco Maria Ricci, the designer and art publisher: “Now here is something I know nothing about. I’ll have to write a book about it.”

The other from Pier Carlo Bontempi, our architect, said while strolling the streets of Parma: “I like it a lot when a street does not immediately reveal where it will bring you.”

Being lost means you can get caught in a nightmarish loop, as in a labyrinth, but it also is a chance for alertness, for hope, and for blessed discovery.

“When you are on a road going to who knows where, you are brought to reflect that even in our spirit, we are a little like this. We are a type of labyrinth. And this road is also like trying to find the truth. The truth that we know is always hard to find, and of which we can never be certain. The difficulty of the labyrinth is a bit of a search for finding the truth within ourselves.” 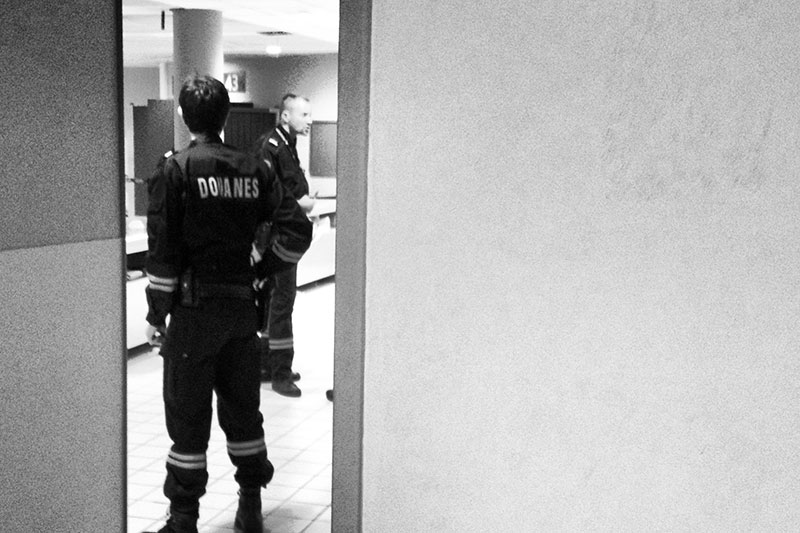 At Charles de Gaulle Airport in Paris. We’ve arrived. These French customs men did not look like American customs officers. Let’s just say they looked to be strong and in fantastic shape. This photo was taken while I worked through the labyrinth of officials to have our eight or so cases of gear cleared, all of which had papers the size of a high school assignment. It turned out to be a simple matter, if time consuming. But it was new to me, disorienting, and I was separated from my group, in rooms behind rooms.

As I took in the customs officers through the door and wondered where the next turn in the road would lead, I snapped this picture. Black and white, courtesy of an iPhone app. I love this picture. It reminds me of a still from a French New Wave film. 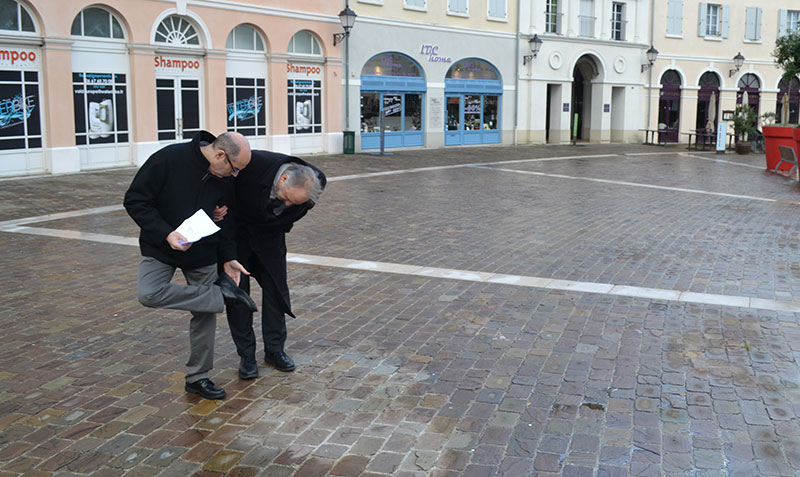 That’s Geoffrey Baer. And that’s Maurice Culot. I think they’re comparing shoes. We’re in the Place de Toscane, designed by Pier Carlo Bontempi. It is in Serris, a district in Val d’Europe, an instant city in the fields west of Paris. American architect Jacque Robertson did the master plan of Val d’Europe for Euro Disney. The theme park is a few kilometers away. It was our first day of shooting.

I just love the awkwardness and grace of their pose. It was for real, as they say. So Culot, a Belgian architect, urban planner, and writer who has designed buildings in Val d’Europe, knew filmmaker Jacques Tati (he told us Tati drank a lot) and worked in Frank Lloyd Wright’s office as a young man (alas, Frank was already dead) and for visionary architect Paolo Soleri. He has a daughter who’s a punk rocker, and he answered questions about traditional architecture with statements about the death of God and the front lines in World War I in 1914. Geoffrey was ecstatic, as he is a pro who knows when the unexpected will light up the screen. Maurice was great company.

By the way, when we asked for a map at the hotel, the desk clerk said: “We have not the map. There is nothing here.” 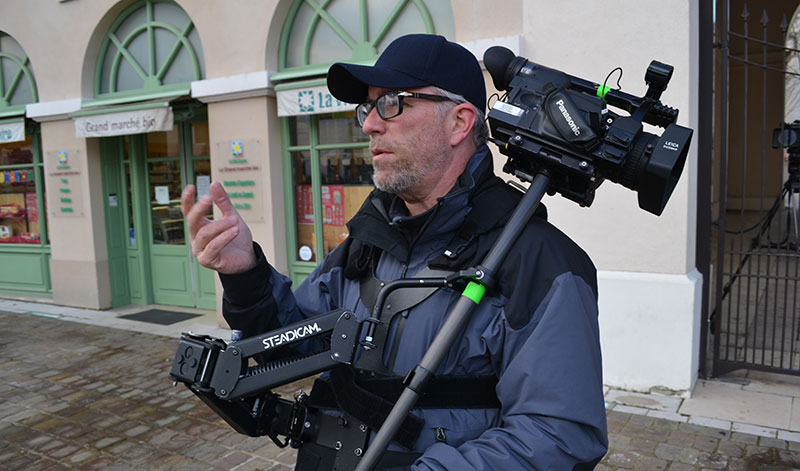 We tried something new. We rented a lightweight Steadicam rig to use in a couple of locations. Mostly it was for moving through the bamboo labyrinth on Franco Maria Ricci’s property. Here, in the Place de Toscane, our cameraman Tim Boyd used it to record the conversation between Geoffrey and Maurice Culot. Cool! The camera on the rig is my personal camera, shooting HD on a P2 card. It weighs considerably less than the station’s marvelous Sony XDCAM rig. And it costs a lot less too. It is a glorious day when your camera gets taken out for a ride on a Steadicam in France (the camera’s version of a roller coaster). 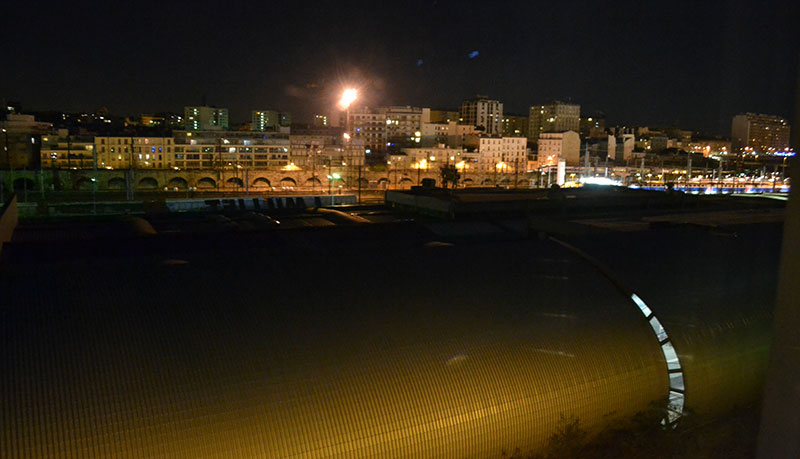 Here is my snapshot from our night in Paris. Take a good look – that’s Paris. It’s the view from the hotel near the tracks leading into and out of Gare de Lyon, Paris’ TGV (Train à Grande Vitesse, high-speed train) station. We didn’t even have a decent dinner in Paris. We ate cold plates at the hotel bar. And we had already spent a couple of hours trying to find gas, the hotel, parking, and figure out where the station was, and…and…lost. Without a map. Just remember kids: it may sound cool but sometimes you’re just looking out on a xenon-lit nothingness. 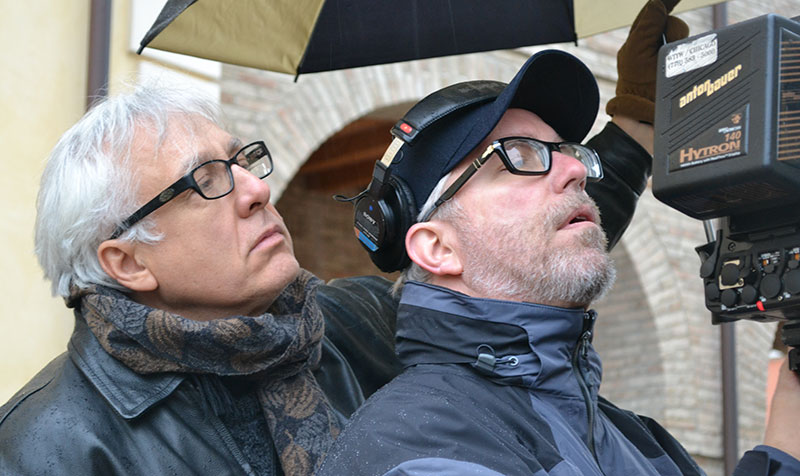 Tim Boyd and Me

So the truth is there is no show without pictures and on this show there are no pictures without Tim. Tim was one of the first camera people I worked with when I started at WTTW in 2000, and he has been a trusted partner on many projects. It’s one of the most important relationships on a shoot. Tim was a great traveling companion: measured, smart, excited by the new, and ready to go out to dinner every night. That’s not bad. Here we are in the rain at Fonti di Matilde, a spa town near Reggio Emilia. Not everybody shoots in the rain and keeps their composure. 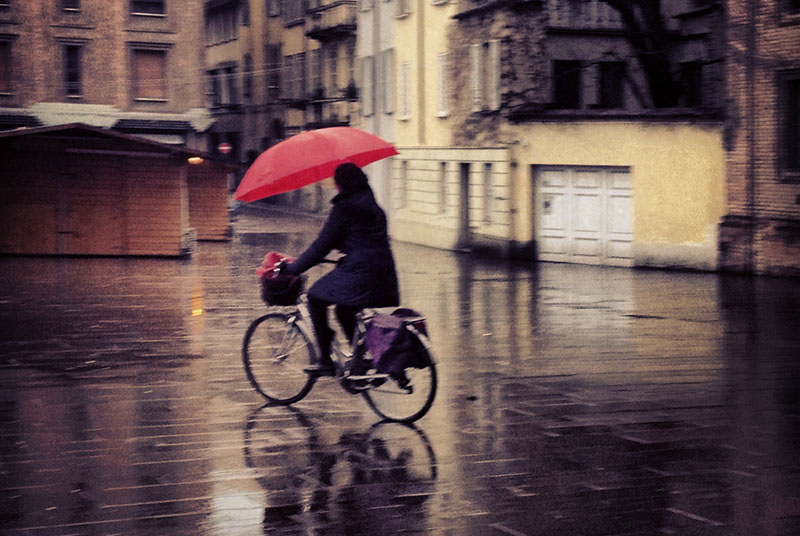 The Streets of Parma

The woman with the red umbrella riding her bicycle in the rain, flowers in her basket, was one of the many beautiful ordinary things to be seen on the wet and cold streets of Parma. I snapped three pictures as fast as I could on my iPhone and then uploaded this one to Instagram so my family could see it. I did dump a couple of filters on it. But imagine this same action and image with a different background, a background of modernist buildings. Or this same woman in a car. If you can imagine either you are halfway to understanding the lessons of our show. 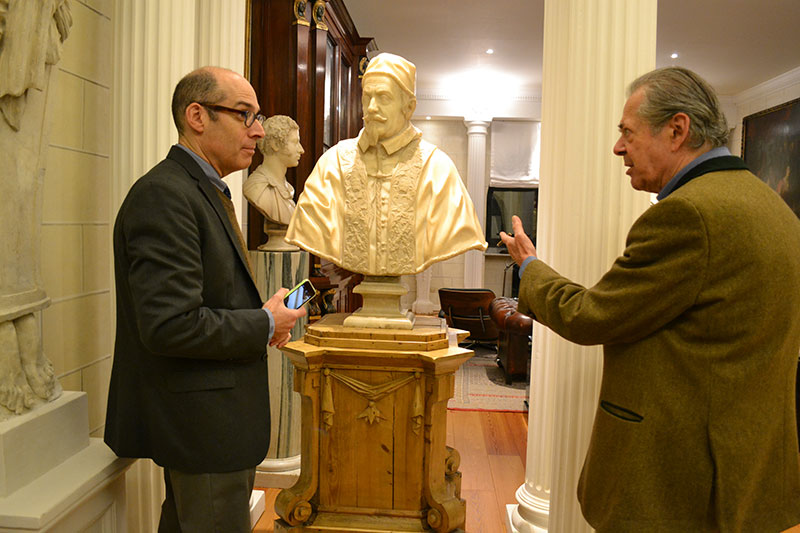 I Own this Statue, Says the Man on the Right

That’s a friggin’ Bernini. Of a pope, for God’s sake. Don’t ask me which one. And there’s Geoffrey with Franco Maria Ricci. The fact that I didn’t know Ricci before this is one of those incredible revelations of how truly ignorant one can be, and how deeply provincial Americans can be. We have sea to shining sea, so we think we’re rich in culture. Au contraire. This guy is a genius of design and he published an art magazine, FMR, that I should have been buying when I often had to decide whether to buy a book or get some ramen noodles and Japanese beer at the Korean deli on Avenue A. I would have forgone a dinner or two for one of those tomes. Ricci’s home is on the grounds of the museum and library complex Bontempi is building in the center of Ricci’s three kilometer bamboo labyrinth. His house looks like ruins from the outside and inside its three intensely classical chambers – jewels hidden in aging wrappers. The Bernini is a jewel within a jewel. I always want to touch art, by the way. That's true. It can get me in trouble in museums. Here? Not so much. Did I touch the Bernini? You bet I did. 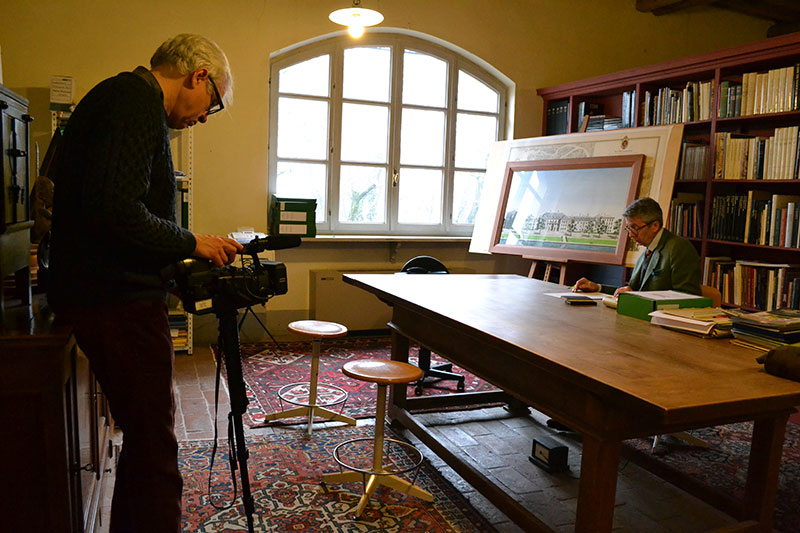 This facing off is at the heart of every show. A person of great accomplishment I’ve never met, who has never met me, has agreed to be open to the process of our intrusion, our shooting. We attempt to capture quiet and private moments, to honor the subject’s words, and their oeuvre. But it is a contrivance, and of course it only captures the slightest slice of what it means to be in someone’s presence. We are there for a short, intense period and then we move on to the next stage, obsessively working over the material for weeks in the editing room. It is possible to emerge with the strong delusion that you somehow know your subjects in a very intimate way. It was good to meet this kind and gentle and considered, talented man. It was worth all of the struggles to find our way. I hope some of that is reflected in the final product. 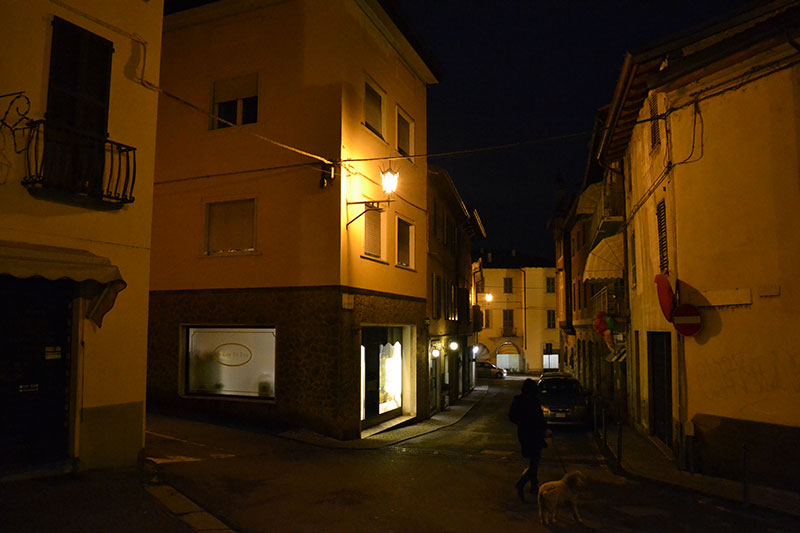 My grandfather was an immigrant. He came from Italy in the early 20th century as a young boy with his four brothers and two sisters. Life was very hard for his parents. Consequently, my grandfather grew up in an orphanage in Vincennes, Indiana. But he could have grown up here. This was his hometown – Castell’Arquato. It is about 35 kilometers from Parma. We were able to make a short stop here on our last full day in Italy, on the way to Milan. The town is beautiful – old, traditional, winding, mysterious, and friendly, with a castle on the hill. Everything I suppose Pier Carlo appreciates in the landscape of his town. I’d never been here before. 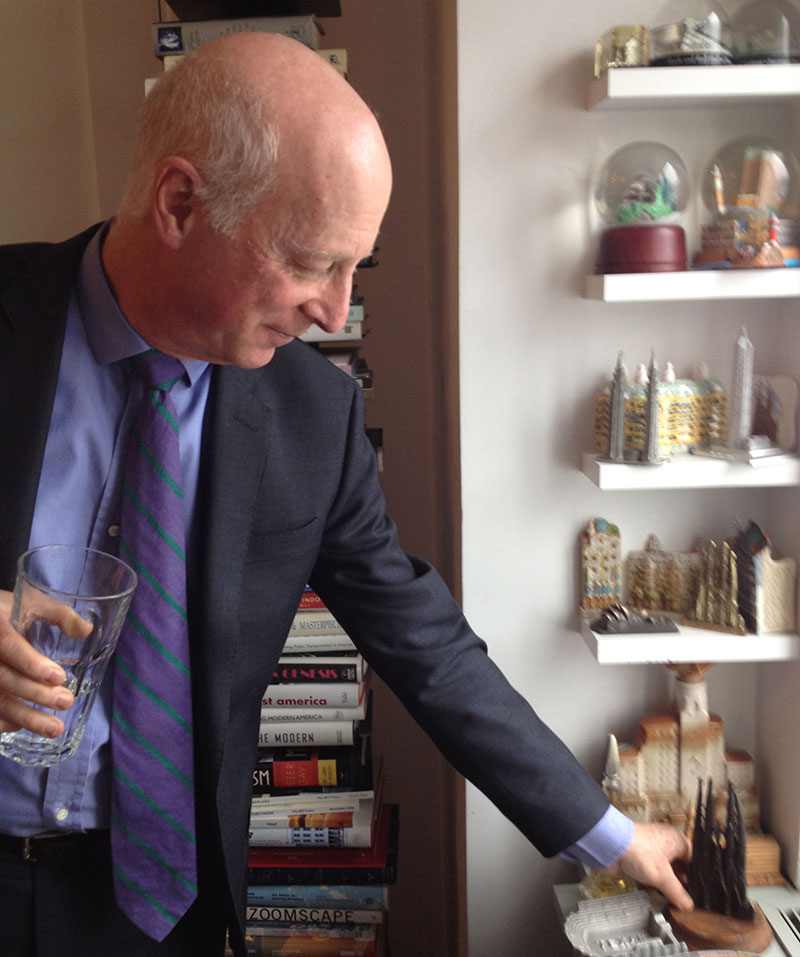 There are moments when I realize that I have an incredible job. Connecting with architecture critic Paul Goldberger in 2011 was one of those moments. We decided it would be a smart idea to have him weigh in on architect Bob Stern for a documentary we made that year. Goldberger’s book, “The Skycraper,” and his collection of essays and pieces for the New York Times “On the Rise,” were so very important to me when I was a young man in New York.

To meet Goldberger was for me like meeting a superstar. But I went on to meet him another two times with a crew, and to have numerous incredible, intelligent, and pleasant phone conversations. This year we were in his marvelous apartment overlooking Central Park. His office at the front of the apartment is full of books and small souvenir models of buildings. Here Paul shows one off to Geoffrey and me. The beautiful light pouring in comes from an all-day snowstorm that threatened our travel plans. 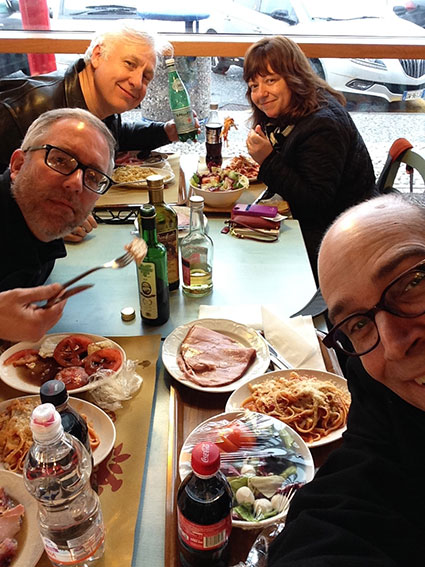