A train on Wabash Avenue crosses over Monroe Street in the Loop in 1908. Photo: Courtesy of the Chicago Transit Authority

The History of the ‘L’

The Chicago ‘L’ has been winding its way through the city’s alleys and rumbling past windows for well more than a century. For many Chicagoans, it’s part of everyday life. But it wasn’t always the system people know today – or even known by the same name.

The first L lines were privately owned and operated as separate companies.  In 1892, according to CTA historian and expert Graham Garfield, who tracks the extensive history of the ‘L’ in great detail on Chicago-L.org, the Chicago and South Side Rapid Transit Railroad began operating the first elevated train. A steam locomotive pulled wooden coaches between terminals at Congress Street and what is now Pershing Road. The tracks plotted a 3.6-mile line adjacent to alleys, so it was dubbed the “Alley ‘L.’” The Green Line still uses those tracks today. Service was extended to 63rd Street in Jackson Park to serve the World’s Colombian Exposition.

Another steam-powered elevated railroad known as the Lake Street Line began operating between what is now Laramie Avenue on the West Side and the edge of downtown in 1893.  This is today’s Green Line to Oak Park.

The Metropolitan West Side Elevated was the third ‘L’ company to open, but the first to use electric technology. Its main line began operating in 1895, starting at Franklin Street and branching in three separate directions toward Garfield Park, Douglas Park, and Logan Square.

Portions of these tracks are today’s Blue and Pink Lines. Looking west to Lake Street from Wabash Avenue, workers build the Lake Street leg of the Loop ‘L’ in 1895. Photo: Courtesy of the Chicago Transit Authority

Before 1897, All the ‘L’ lines terminated just short of downtown. Enter Charles Tyson Yerkes, a mass-transit mogul who would later play a role in developing London’s underground. Yerkes already owned some of the city’s streetcar system. He worked to get permission, sometimes with deception and bribery, from landowners downtown to construct the Union Loop, which eventually became the downtown Loop commuters know today. Once Chicagoans had direct access to the shopping and businesses of downtown, ridership increased. 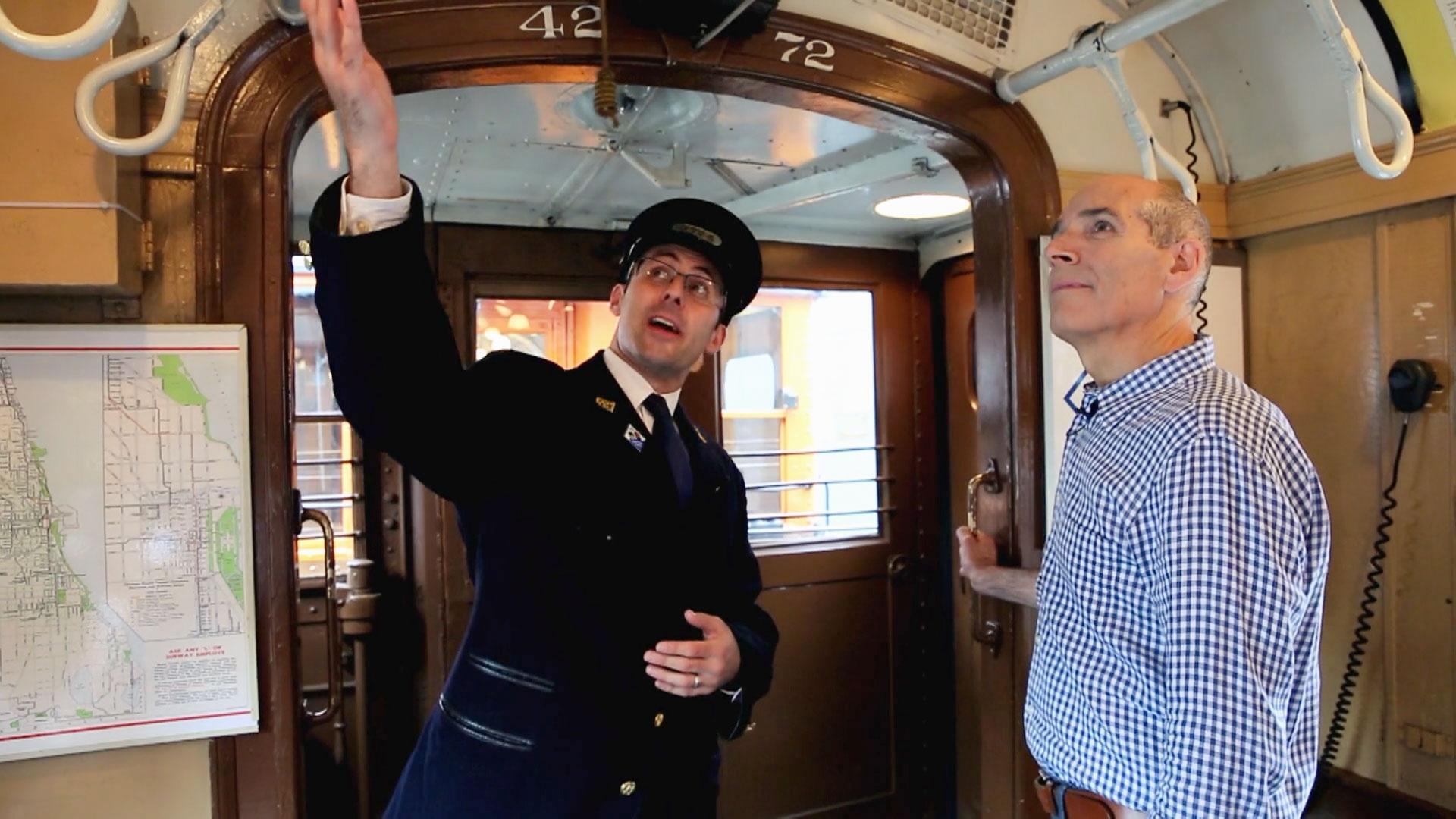 The Yerkes-owned Northwestern ‘L’ added yet another line for Chicagoans in 1900, this time north from the Loop to Wilson Avenue. It was extended multiple times in the decade that followed, including a branch that ended at Kimball and Lawrence avenues (today’s Brown Line), and an extension of the original branch to Howard Street (present-day Red Line) and eventually Linden Avenue in Wilmette (today known as the Purple Line).

In 1919, passengers could do something that ‘L’ riders can’t do today: take a train from the Loop all the way to Milwaukee. Samuel Insull’s “North Shore Line” shared tracks with the ‘L’ up to Linden in Wilmette and continue on from there as its own line. A high-speed Skokie Valley branch of the North Shore Line later split off from the ‘L’ line at Howard Street.  Today this is the Yellow Line and it ends at Dempster Street in Skokie. (The North Shore line went out of business in 1963.) In 1924, the various lines, which were owned by separate groups, were consolidated into one entity: the Chicago Rapid Transit Company. A train bound for Ravenswood and Albany Park pulls into the Quincy Station in the Loop in the 1940s. Photo: Courtesy of the Chicago Transit Authority

As the bustling system continued to grow throughout the first half of the twentieth century, the city’s first subway station was built in 1943 under State Street with a 3,300-foot platform. Later, this platform was split into two stops: Lake and Washington.

But as the automobile became more popular and people left the city for the suburbs, ridership declined. In 1947, due to the struggling finances of the separate ‘L,’ bus, and streetcar systems, the city and state governments consolidated them into the Chicago Transit Authority commuters know today. The last streetcar ran in 1958. Also in 1958, the Congress Line (what would later be the Forest Park branch of the Blue Line) began operating in the median of the Congress Expressway. According to Chicago-L.org, this was the first ‘L’ line to run down the center of an expressway. A CTA train crosses over Sheridan Road on the North Side in 1978. Photo: Courtesy of the Chicago Transit Authority

In 1964, the Skokie Swift took off. The federal government helped to fund the re-opening of a previously defunct Skokie Valley branch of the North Shore line that ran from Howard Street to Skokie and on to Milwaukee. The project was supposed to be a two-year experiment to demonstrate that transit could work in a suburban area, including a “Park-N-Ride” that accommodated growing car usage.

And as cars flew down the Dan Ryan, so did a new train line. The new Dan Ryan branch was extended to 95th Street in 1969 and provided much-needed ‘L’ access for residents of the far South Side; this branch would ultimately become part of the Red Line. In 1984, rail service was extended to O’Hare in the median of the Kennedy Expressway so Chicago residents and visitors alike could travel all the way to the city’s largest and busiest airport. Called the Milwaukee Line at the time, the Blue Line used to end at Logan Square, but it was extended to Jefferson Park in the 1970s before going to O’Hare. The Orange Line opened on Halloween in 1993. Photo: Courtesy of the Chicago Transit Authority

In 1993, CTA rail routes got the colorful new names we know today: the Ravenswood Line became the Brown Line, the North Side Main Line, State Street Subway, and Dan Ryan branch all became the Red Line, and so on. In the same year, the CTA began operating the Orange Line to Midway Airport. The Pink Line, the CTA’s newest line, opened in June 2006, serving 54th Avenue and Cermak Road.