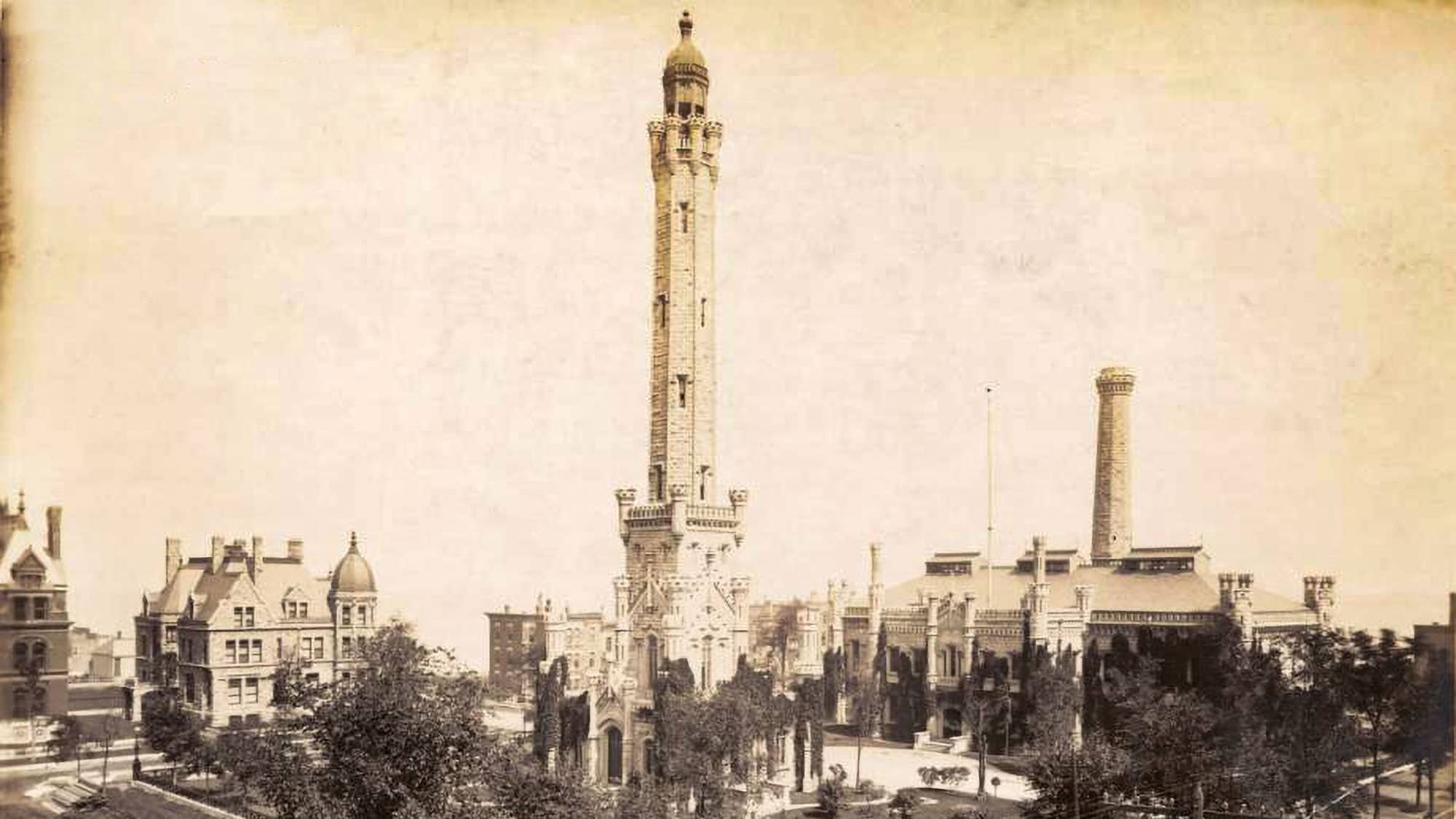 'The Water Tower Survived. We Will Survive.' — The Buildings and Objects that Outlasted the Chicago Fire

The Buildings and Objects that Outlasted the Chicago Fire

The Water Tower is one of a few buildings that survived the Chicago Fire of 1871. Photo: Courtesy of the Chicago History Museum

When Joseph Hudlin heard that a fire was headed towards downtown Chicago, he left his home and rushed to the Board of Trade building where he was head janitor. Hudlin ran into the building to save important records before the building burned down.

Hudlin, who had moved to Chicago in 1854 after fleeing slavery in Virginia, was celebrated as a hero. Joseph’s employers hung a portrait of him in the Board of Trade building for many years to honor him. The Chicago Tribune called his wife, Anna Elizabeth, an “angel of the fire” because the Hudlins and their five children opened their South Side cottage to five families, both Black and white, whose homes had been destroyed. 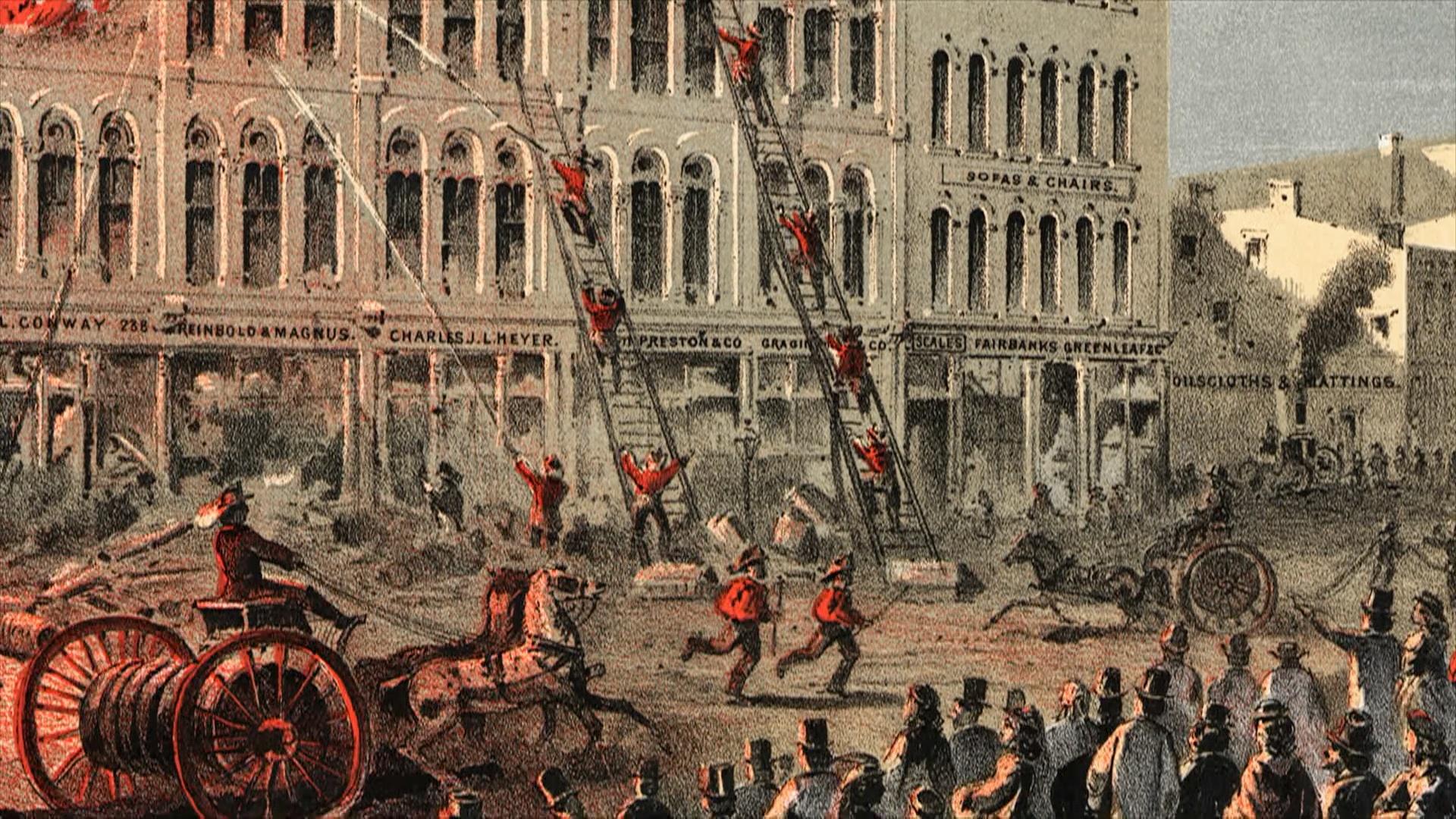 An estimated 300 people died in the fire of 1871, but many more survived. Because of acts of bravery such as Hudlin’s, seemingly insignificant choices, or a fortuitous shift in the winds, the objects those people carried and the buildings they lived in, worshipped in, and walked past survived, too.

Many Chicagoans know that the Water Tower survived the fire. During the blaze, the roof caught fire and collapsed into the pumps, destroying them, along with any hope that there would be enough water to stop the spread of the fire. But the structure itself survived.

“There is a story that the water superintendent got sheets or sails or some fabric and wrapped the buildings in wet fabric to protect them from the fire, and that’s one of the reasons it survived,” said Ellen Shubart, a docent at the Chicago Architecture Center. “It then becomes the symbol of the ‘I will’ spirit after the fire. The water tower survived. We will survive. We have the ‘I will’ spirit of the city to become something bigger and better.”

But the Water Tower wasn’t the only building that survived. Old St. Patrick’s Catholic Church, located on Adams Street just west of the Loop, also survived, and is Chicago’s oldest church.

Gallery: The Buildings That Survived 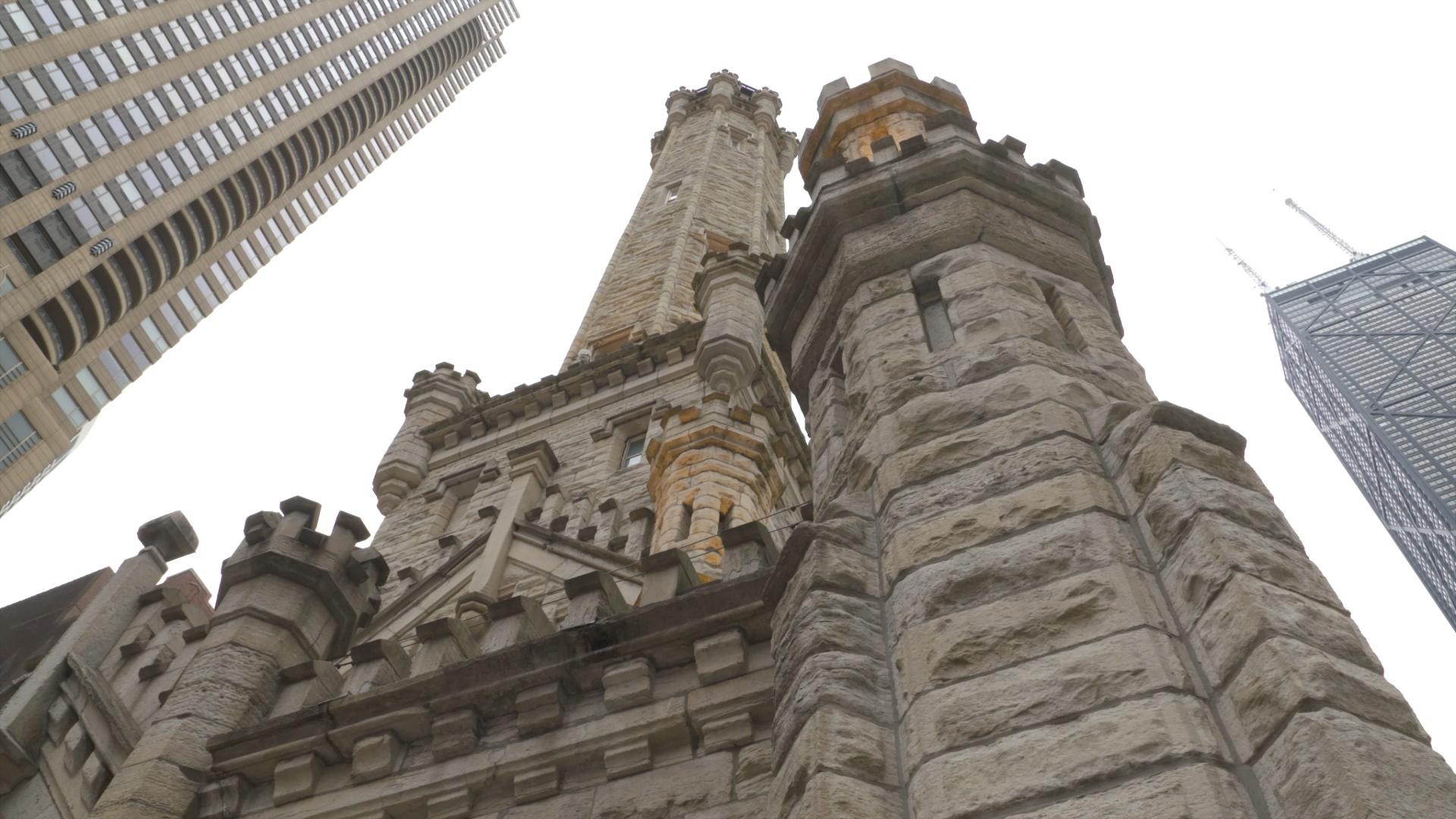 Video: 11 Buildings that Survived the Fire

Holy Family Catholic Church, where the O’Leary family worshipped, also has a story of survival – though it’s more of a legend. The story goes that Father Arnold Damen, who founded the Jesuit church on Roosevelt Road, was in New York when he received a telegram with news of the fire. According to local historian Ellen Skerrett, he got down on his knees to pray and promised Our Lady of Perpetual Help that if his church was spared, he would keep seven candles burning in front of her image. Legend has it that the winds miraculously shifted, blowing the fire away from the church.

In addition to houses of worship, there is one home on North Hudson Street in Lincoln Park that stands as another act of survival. It’s the home of Chicago police officer Richard Bellinger. On the night of the fire, Bellinger doused his home with water to prevent it from burning, and when the supply of water ran out, he used cider. According to the Chicago History Museum, the structure was built in the late 1860s and was one of the only structures in the burn district north of downtown to survive. Though it has since been renovated, the home still looks much as it did at the time of the fire. 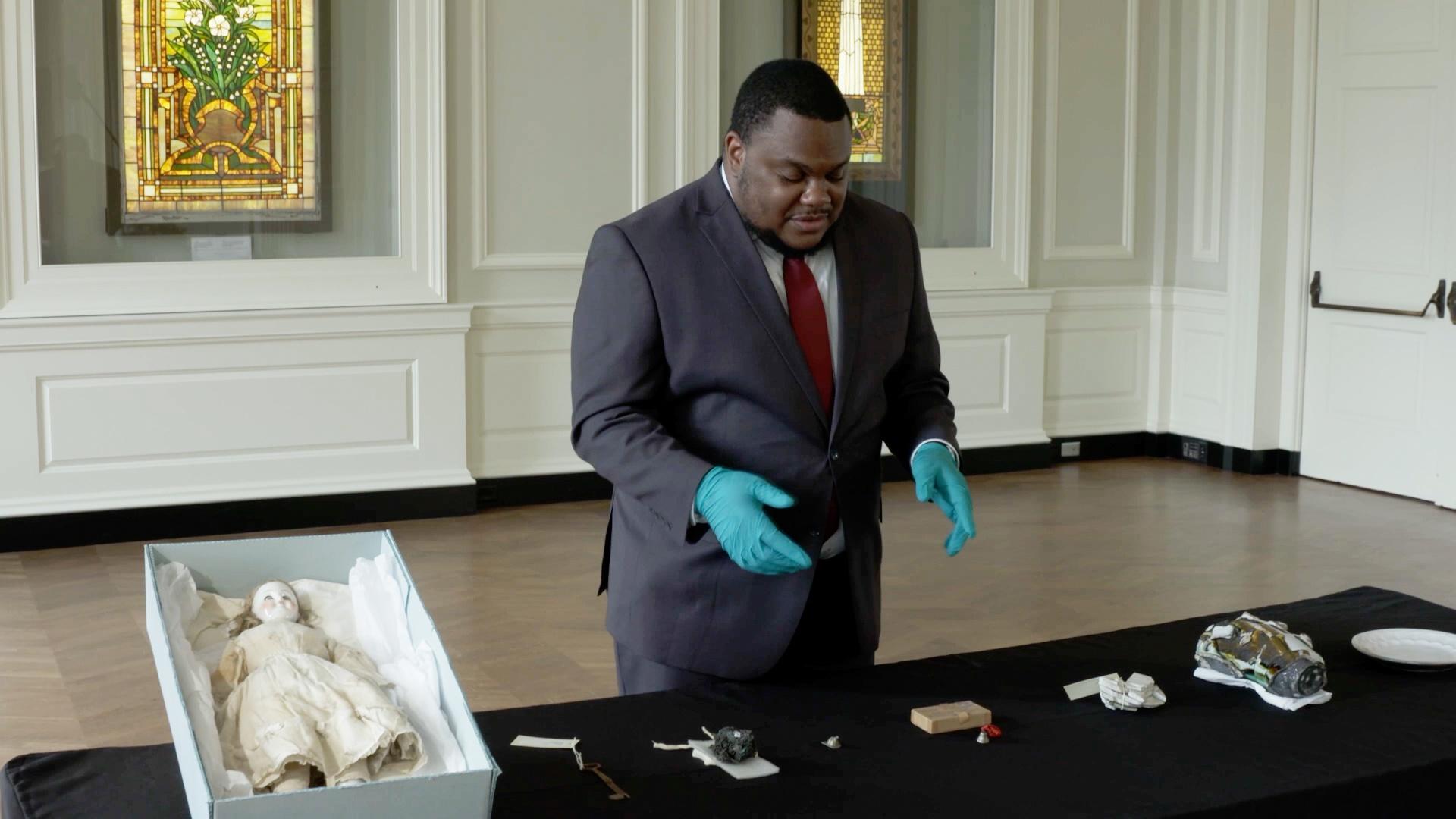 Video: 11 Objects that Survived the Fire

While Joseph Hudlin ran toward the flames to save the Board of Trade documents, many people fled their homes. The things they took with them became survivors, too, while the objects that were left behind and charred or melted by the fire became interesting artifacts. The Chicago History Museum, which is opening a new exhibit on the 150th anniversary of the fire in 2021, is home to many of those objects. One of the more notable ones, said Julius Jones, assistant curator at the museum, is a doll named Bessie – the toy of a six-year-old girl whose family had to flee the flames.

In her first-person account that appears on the museum’s online exhibit, Mrs. Butler, to whom the doll belonged when she was a child, writes about her family’s experience preparing to leave in their carriage:

At that moment I remembered my precious doll Bessie, had been left in the playroom and instan[t]ly I jumped out and ran back to the house where I picked up Bessie in her crib and carried both away in my arms.

There are a number of objects that reveal the fire’s power, too: a stack of teacups melted together, a collection of fused marbles, charred pocket watches, a glass bottle bent by the heat, melted hardware, and more.

And then there’s “the blob.” Just outside the museum, now mostly obscured by bushes, is a large hunk of mystery metal.

“We don't exactly know what it is, but it is a ‘blob,’” said Jones. “We believe that it could possibly be some sort of collection of tools that were melted in the fire.”

Gallery: Remnants of the Fire

Jones said one of his favorite artifacts comes from a boy who survived the fire.

“We have a handwritten letter from a young man named Justin who wrote [about] and drew a picture of his escape from the fire,” Jones said. “He had a pet goat, so he had a really cool picture of that. This is something that a young man drew in the immediate aftermath of the fire.”

A drawing, a blob, a stack of melted teacups, a doll, or a collection of important documents from the Board of Trade are not just things. They’re the remnants of a real, lived experience that allow people today to put themselves in the shoes of those fleeing the fire, such as Joseph Hudlin, Officer Bellinger, or Mrs. Butler.

“People literally saw fire rolling across the sky and in that moment had to make decisions about what they would take, where they would go, where they could turn.” Jones said. “And I think anyone who's ever faced some level of adversity, even if it's not a fire or other natural disaster, can empathize with that experience. How do you recover? How do you persevere? How do you survive and go on?"