The Healing Potential of Improvisation

When you hear the word “improv,” chances are you’re imagining a group of funny people performing on stage to the sound of laughter coming from an audience that is packed into a cabaret-style theater. But the roots of improvisation are actually in social work – specifically at Hull House, the settlement house where Viola Spolin learned about the benefits of group play for new immigrants from sociologist Neva Boyd. Spolin’s work at Hull House ultimately culminated in her creation of theater games, which became the foundation of improvisation. Here in Chicago, there are plenty of groups that are still honoring that work. Several programs are rediscovering how improv has therapeutic potential and can allow for a sense of healing and community regardless of a person’s diagnosis, age, or status in life. 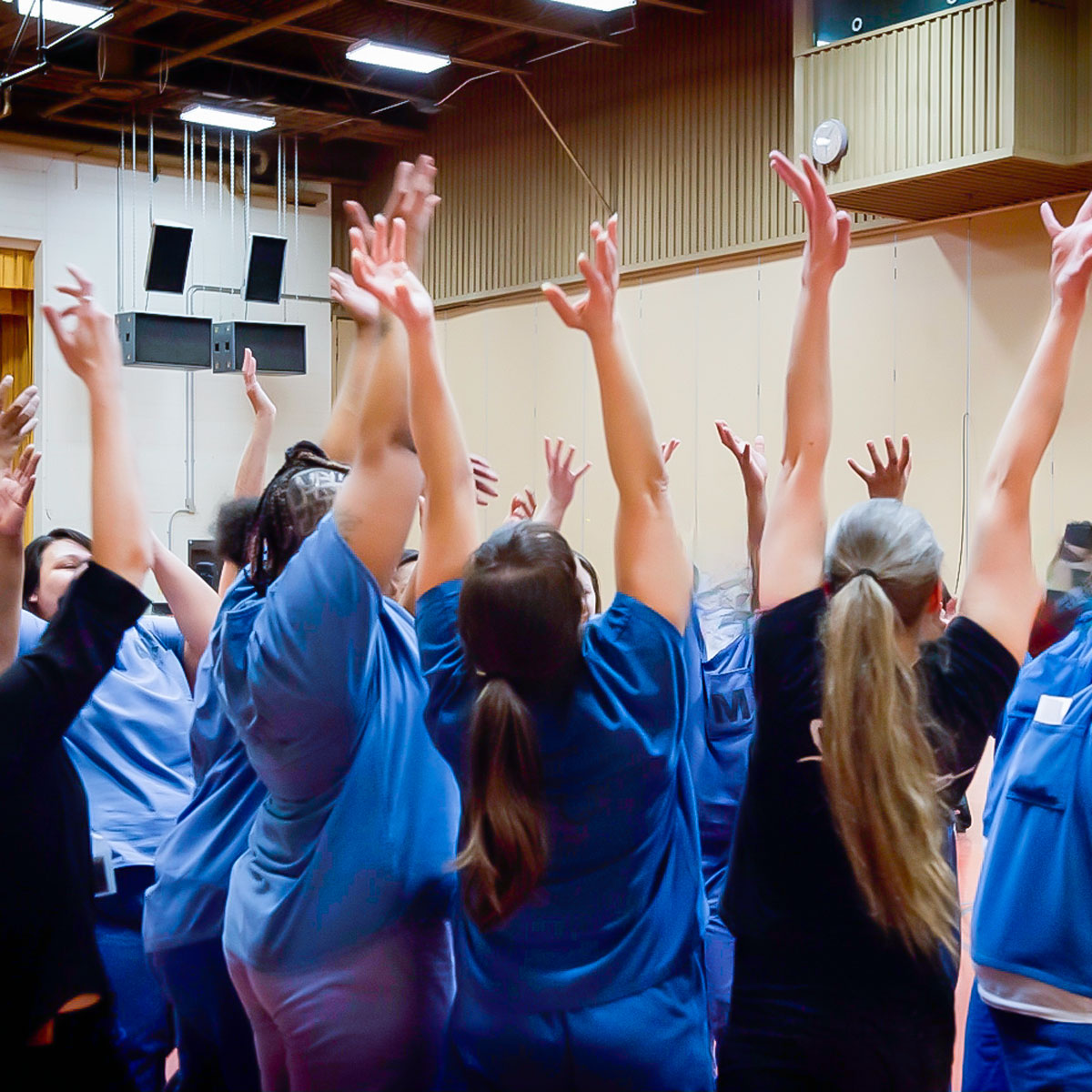 Improvising into the Unknown

For people living with anxiety, improv might seem like the last thing that would be appealing. After all, improv involves a lot of uncertainty – stepping onto a stage with no plan and making things up on the spot. But since 2014 at The Second City, there have been classes designed specifically for people who experience anxiety. 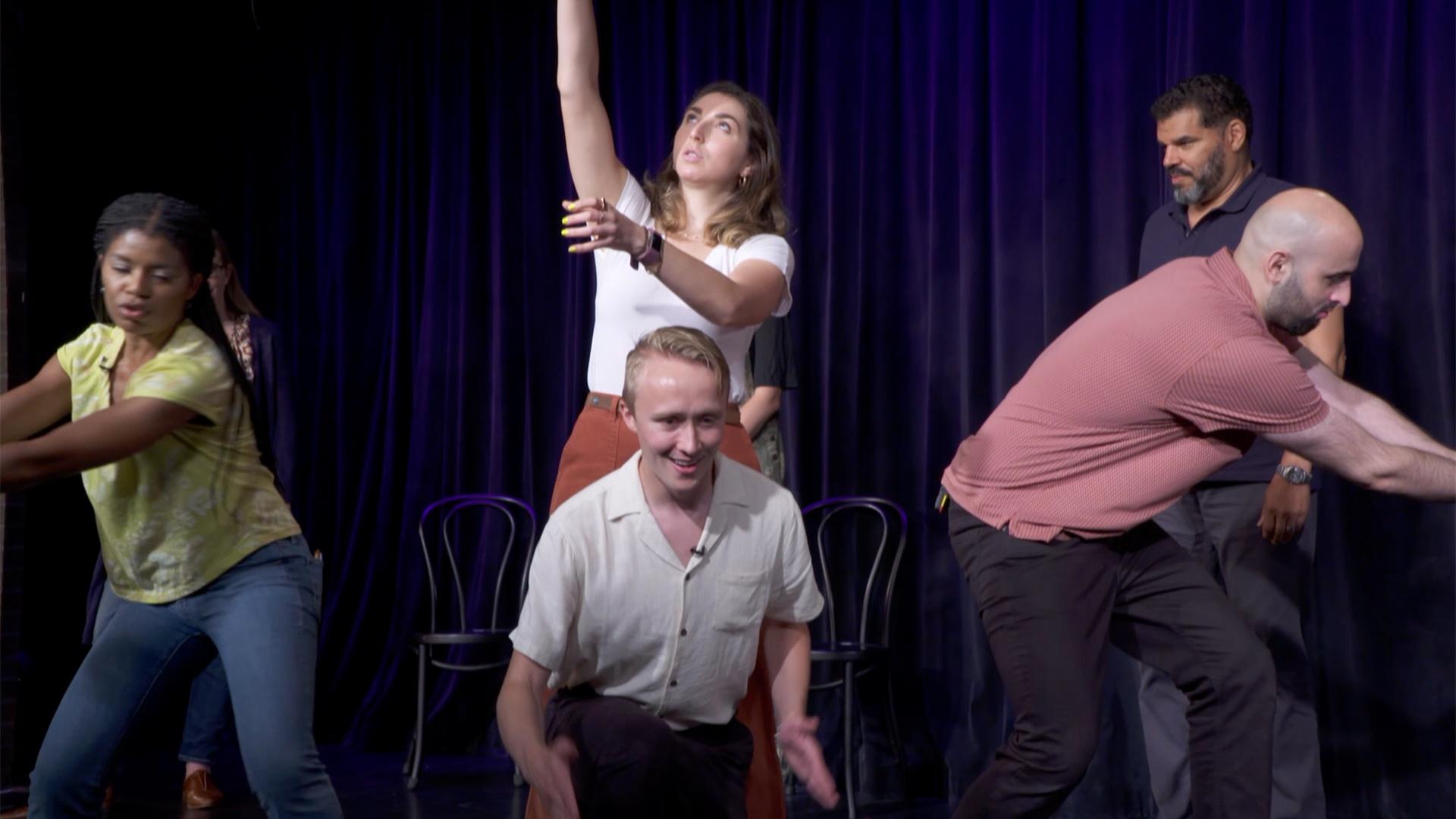 For Becca Barish, a licensed clinical social worker and former head of the Wellness Program at The Second City, one of the reasons improv has therapeutic potential is that it is a nonjudgmental art form rooted in support. For example, “Yes, and…” is a common rule in improv, which means that one performer accepts the contribution of another and builds upon it. That kind of supportive atmosphere can be beneficial for people who are looking to manage their anxiety in a safe space.

“The class in itself creates an opportunity for people to be able to practice some of these things that they might generally avoid and do it in a way that’s oftentimes funny,” Barish said.

Barish said the classes aren’t all that different from typical Second City improv classes. The students do warm-ups, group exercises, and scenes. But they also do games that “are specifically chosen to address key triggers for social anxiety,” according to the website.

For example, one improv game called “Word at a Time Story” involves the group making up a story, with each person offering one word at a time.

How much am I stressing about what word is coming next, or feeling like I have to have control over it, or feeling like I don't want to be the one to make decisions? … The more we understand the way that we react to those exercises, the more we can understand some of the ways our anxiety is manifesting in other contexts.
Becca Barish, licensed clinical social worker

The students might also role-play in class, using scenarios in which their social anxiety might be triggered – such as a conflict with a landlord, a conversation with a stranger, or giving a presentation at work.

Part of the reason these classes provide a safe space, Barish said, is that “the stakes are pretty low.”

“At the end of the day, if the scene doesn't go well, maybe it's just like, ‘OK, well, I can now know that I didn't die from that.’ Then they can use those same skill sets in other ways,” Barish said.

The Second City has other classes in its Wellness Program designed to create a community for people that might typically feel excluded from the improv world, including classes for adults over 55, individuals with autism, and people who have been diagnosed with Parkinson’s disease. All of this, Barish said, is actually getting back to the origins of improvisation.

“If you look back at Hull House and you look at what they were doing with adults who didn’t speak English or were new to America, they were like, ‘Let’s just play and see what comes out of that,’” Barish said. “We're really just getting back to the roots of what [improv] was founded in.”

Barish said she likes to see the transformation of students from when they walk in for the first class to the last class when they have “shed so many of these layers” and feel more comfortable being themselves.

“It opens you up to really explore the depths of what you’re capable of, whether it be because of diagnosis, age, or certain circumstances. I think to be able to connect with other people to share in that vulnerability and to normalize experiences is just so wonderful.”

In her book, Improvisation for the Theater, Viola Spolin writes that acting ﻿“requires an environment in which experiencing can take place, a person free to experience, and an activity that brings about spontaneity.”

One acting program in Cook County Jail is working to create a space where women who are incarcerated have a chance to tap into their spontaneity and sense of play.

“Incarcerated people have very little control over their day and a student can be coming to our class with a whole host of stressors,” said Jennifer Green, artistic director of the Piven Theatre Workshop, which runs the program.

Based in Evanston, the Piven Theatre Workshop runs several programs for populations that are underrepresented in the arts, including neurodiverse individuals and children in the foster care system, among others.

Piven’s Cook County Jail program, called Ensemble Play in Cook County Jail (EPIC), teaches improv and theater games to women awaiting trial, with each term ending in a performance for an audience consisting of other women in the jail, staff, and outside artists.

The classes are “trauma-informed,” meaning that they acknowledge that everyone has a personal history that they bring with them to the class. As Piven’s Green puts it, “Everyone's voice is important. Everyone has a place at the table. We reach people where they are.” 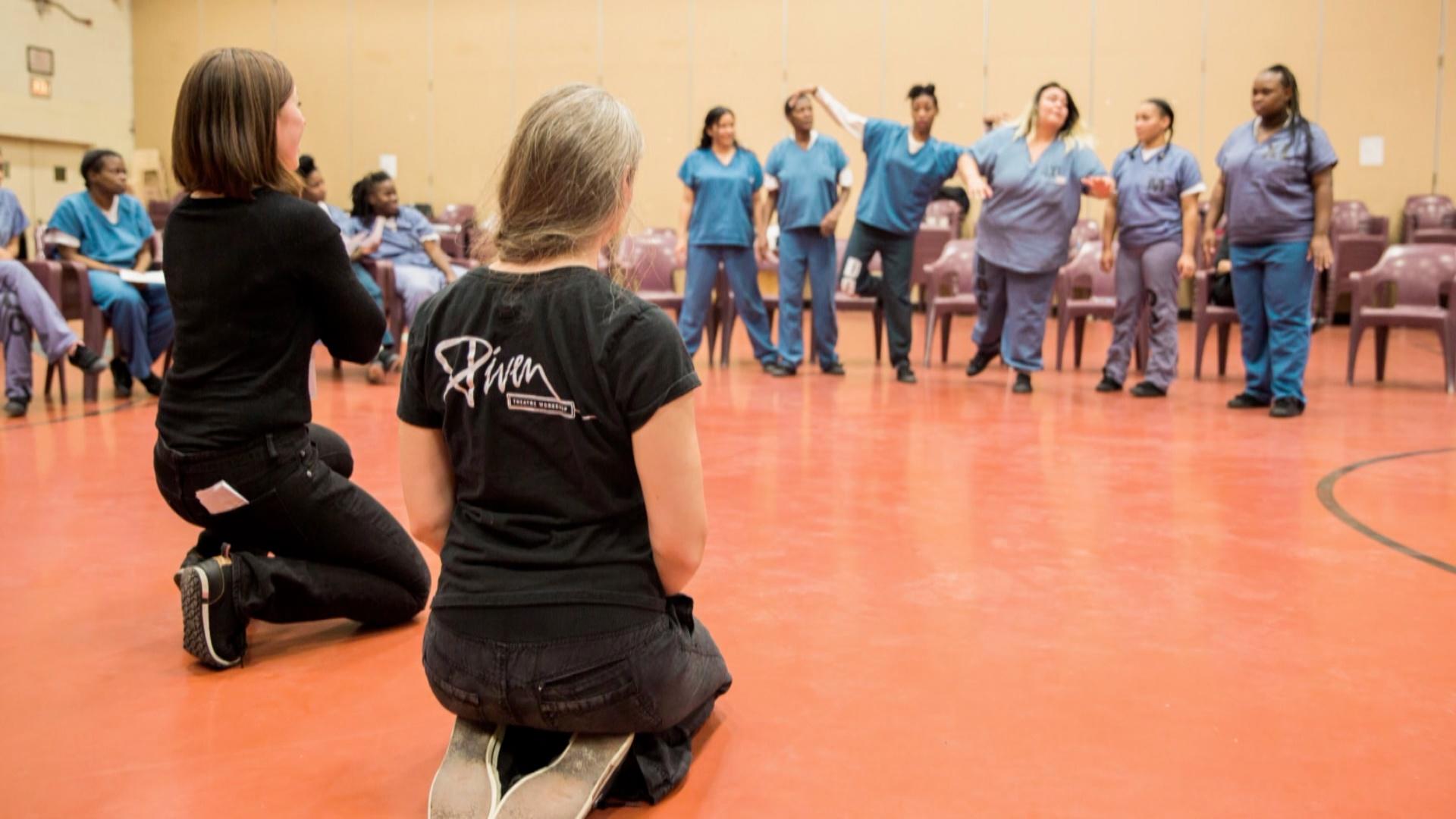 The Transformative Power of Improv

According to Green, each class starts with a meditation and self-reflection component to help women transition from the jail to a creative space. After that, the classes look similar to any other acting class. The group warms up and plays games that build skills such as listening, empathy, and collaboration. The class ends with a reflection, which often involves writing a poem, allowing the women to check in with their emotions before they return to their tiers.

For Green, the “genius” of theater games is that they are, at their core, simple playground games with no social hierarchy. It can feel healing to create something new and have the freedom to explore “our authentic selves.” That makes them useful in just about any context, including the incarceration system.

They’re very accessible and they’re very democratic, and they’re not reliant on an expectation of coming in with a great knowledge of theater ... That curiosity, that connection, that desire for communication is something that's just hardwired into being a human being.
Jennifer Green, The Piven Theatre Workshop

Green said the Piven Theatre Workshop wants to explore how the skills that emerge from theater games could be used for conflict de-escalation, too, though that program is still in its very early development.

“One thing we noticed while we were at the jail is just the way that being witness to the women in our program – exploring games and exploring their voice – we’re seeing the guards in the room find smiles on their faces,” Green said. “Building connections within that power structure can be really powerful.”

Improving the Quality of Life for People Living with Memory Loss

For people who have received a diagnosis of Alzheimer’s or dementia, there is a lot of uncertainty about what the future holds. A partnership between Northwestern’s Mesulam Center for Cognitive Neurology and Alzheimer’s Disease and the Lookingglass Theatre Company seeks to lean into that uncertainty.

Since 2010, the group, called The Memory Ensemble, has been exploring how improvisation can improve the quality of life for individuals living with Alzheimer’s or dementia. (The group has since paused their workshops due to the pandemic.)

Dr. Darby Morhardt, associate professor at the Mesulam Center, had been researching the quality of life of dementia patients for years. Dr. Christine Mary Dunford, director of the School of Theater and Music at University of Illinois Chicago and an ensemble member at Lookingglass, approached her about working together.

“It was really just … another opportunity for people with living with dementia to come together, to focus on their strengths and not on what they're losing,” Morhardt said.

In a co-written paper, Morhardt and Dunford write that people with memory loss “are often incorrectly assumed to be incapable of engaging in creative or performative pursuits, developing skills, forming community, or enjoying life.” But The Memory Ensemble challenges that assumption. It works to provide a sense of connection and belonging for the patients and to help them understand the changes they are experiencing while still enjoying their lives in a creative way.

Workshops run by The Memory Ensemble teach what Dunford describes as foundational improv skills – saying “Yes, and…”, listening to your partner, and being in the moment. Their goal is reflected in a motto recited in every class.

I am a creative person. When I feel anxious or uncertain, I can stop, breathe, observe, and use my imagination.
The Memory Ensemble motto

Over the course of 90 minutes, the participants get together in a room with an experienced teacher as well as someone representing the clinical side of the program. After warming up, the participants then go through a series of games, some of which are adapted from Viola Spolin, that focus on improvising environment, characters, and relationships. The workshop ends with a “check-out,” in order to see how participants’ moods have changed throughout the class.

“In our early research, we learned that the program improved mood, improved a sense of self-efficacy, and participants talked about an increased sense of normalcy while they were in the room,” Dunford said.

Dunford said that humor is never the objective for the participants while they are doing improv.

“But it’s always there,” Morhardt added.

“We always end up laughing really hard … It's very connected to the intent of the Spolin exercises,” Dunford said, “We're simply trying to be in the moment with the person, and humor happens a lot.”

Dunford pointed to several other elements of the workshops that are beneficial, including being in a community with people experiencing something similar.

“We almost never directly address the memory loss. It’s just a condition for belonging,” Dunford said. “They have a sense of belonging and for a short time, some normalcy.”

Receiving a diagnosis of Alzheimer’s or dementia involves stepping into the unknown, something that is often quite scary.

“But in our program, we do it intentionally to introduce that moment of anxiety and then to work with people,” Dunford said. “It allows people who have uncertainty in their day-to-day lives to artificially walk into more uncertainty and then practice ways to be successful through it.”

Free to Experience: Viola Spolin and the Invention of Improvisation

Everyone Can Improvise: New Theater Envisions a More Inclusive Future for Chicago Improv