In 1968, tensions between Chicago's black population and its police force were at an all-time high. For years, blacks had complained about intimidation, mistreatment, and brutality by police officers. African Americans on the police force also suffered from harassment and abuse. In an organization long known for unwavering support for one another, the department's African American "brothers in blue" found little respect and less protection.

Angered and frustrated by rampant mistreatment, six black police officers and a civilian met secretly to devise a plan to fight back against the blatant harassment. The group founded the Afro-American Patrolmen's League (AAPL) in 1968. Its purpose was two-fold: first it aimed to increase the number of African Americans in Chicago's police force; and second, it intended to seek justice for African American victims of police abuse.

But the battle for justice proved costly for some AAPL members. Shortly after the organization was launched, several members began experiencing increased abuse from their colleagues on the police force. AAPL co-founder Renault Robinson reported that between 1967 and 1973 he was unjustifiably suspended more than 100 times. He also alleged that his superiors intentionally gave him subpar assignments in order to ridicule him. 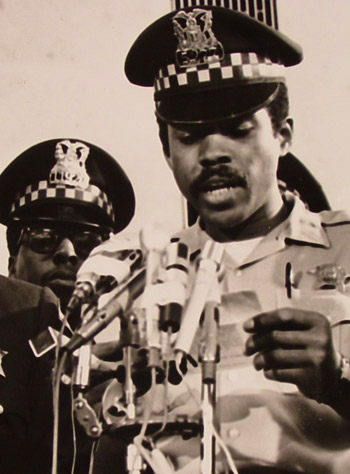 A member of the Afro-American Patrolmen's League reads a statement to the press. (Source: Chicago Defender Archives)

In 1973, the organization filed a discrimination suit against the Chicago Police Department challenging the department on hiring, promotion, assignment, and discipline. The court ruled on behalf of AAPL. When the group's founders launched the organization in 1968, only fifteen percent of Chicago police personnel were African American. By 1975, as a result of the lawsuit, African Americans comprised 40 percent of the force, which was reflective of the city's black population at the time.

The case was eventually taken to the U.S. Supreme Court, which also ruled in favor of the AAPL's representatives. The case was hailed as a landmark ruling, impacting police integration cases in other parts of the country.

Some of the founding members of the AAPL have since left the police force. Yet the organization (now known as the African American Police League) continues to fight against discriminatory practices in the Chicago Police Department. AAPL is one of the pioneers of racial reform in the city.