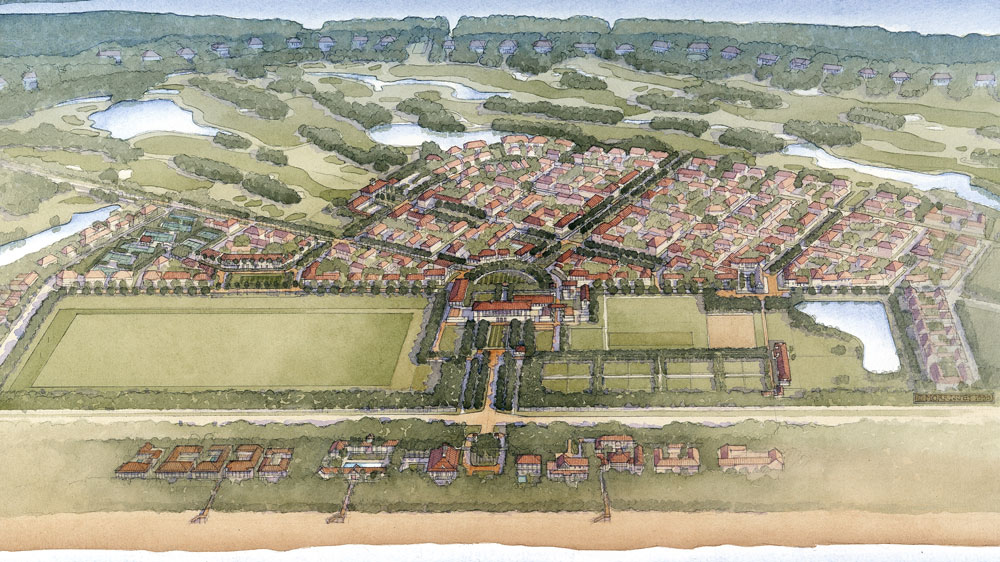 New Urbanism can be described as a universal movement of urban planning that is aimed at raising the quality of life by managing growth and reducing traffic through the creation of sustainable, livable, and walkable communities. Such developments bring people closer together in compact human communities and avoid sprawl while promoting the natural environment.

Considering Scott Merrill’s high-density contributions as town architect at Seaside, Florida and his work with Duany Plater-Zyberk on Windsor in Vero Beach, Merrill is oftentimes labeled as a New Urbanist. However, Merrill is quick to point out that he is not particularly fond of categories and even struggles in identifying what New Urbanism actually entails.

“New Urbanism is one of those terms where no two people mean the same thing by it, and it’s one of those terms that’s a lightning rod for divisiveness,” said Scott Merrill. “I avoid certain phrases and certain terms because of their divisiveness, and I just think that the principles of New Urbanism are so commonsensical. I take it to mean an interest in the rudiments of a city.

“The street is an important part of New Urbanism, but also blocks are part of that as well – building typologies are part of that, clearing a space for people to walk so that a car isn’t completely taking over. These are the things that I think most people would acknowledge are central features of New Urbanism. They’re common sense. Community is a little bit like New Urbanism. It’s one of those phrases that you’re not always clear on what it is that you’re talking about. It’s a difficult subject for me to stick a pin into.”

Although Merrill did play a major role in the birth of New Urbanism at Seaside, his architectural base appears to be rooted in classical and vernacular architecture traditions. While classical architecture is typically associated with the symmetry of Greek and Roman building styles from the classical period in European history, vernacular architecture moves traditional structures forward to integrate them with their surroundings, regional aesthetics and people’s lives, while simultaneously preserving traditions and the aesthetics of buildings and urban spaces that have developed through time. 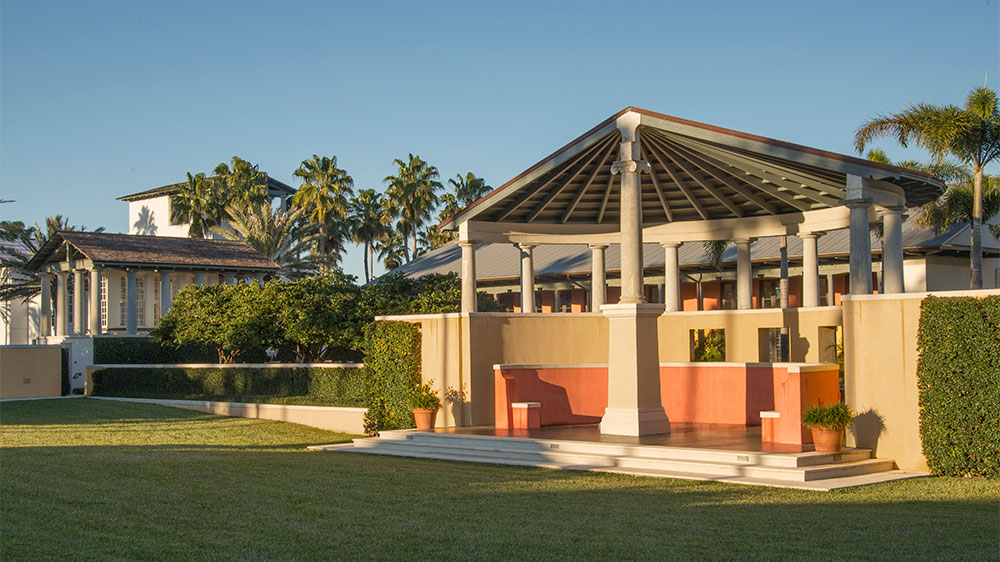 “The classical/vernacular spectrum is nice for its range and its ability to capture everything from coarse to refined buildings,” Merrill said. “I would put most of the vernacular into the course end of the vernacular to classical spectrum. Traditional architecture is great because it addresses everything from the rudimentary, or the rustic, to the things that are the absolutely most refined things we’re capable of making. But I tend to drift toward the lower end, if you will – the vernacular end. That’s why I love bridges and agricultural buildings, and rudimentary forms of houses, and industrial buildings, and things like that. We have refined natures and we have coarse natures, and I love the coarser things as well as the refined ones.”

DPZ’s Elizabeth Plater-Zyberk credits Merrill’s extensive knowledge of traditional architecture to his time studying at the Yale School of Architecture.

“He loves to talk about the low in architecture,” Plater-Zyberk said. “I think that’s what the best of American traditional and classical architecture is about and he probably would have gained an appreciation of this from Vincent Scully, the architectural historian’s courses, which looked at American historical architecture in the light of the reduced circumstances of the colonial condition and how proportion and cleverness and straightforwardness became characteristic of this kind of colonial grace. So I always think of Scott in those terms, that he’s very much a son of the best of early American architecture. I think there’s a great deal of delight in his work, and part of that is that, although the architecture may be in a traditional mode, there’s always something new in it.”

Adrés Duany of DPZ also acknowledged Merrill’s application of the old and the new in Merrill’s work at Seaside.

“What’s interesting about Scott is that he actually transitioned Seaside from the post-modernism of its inception, of its inaugural condition, to the classicism that it would become,” Duany said. “Scott himself has become a superb modernist, along with retaining his old abilities with vernacular and classical, and so forth. And one of the things that is most important, I think, about Scott receiving the Driehaus is not only his relatively young age, but it actually represents that open mindedness, that non-ideological understanding that it really is about good buildings and not about a kind of religious belief that classicism is the only way.”

An element of New Urbanism that Merrill seems to associate with vernacular architecture is the idea of establishing human community. 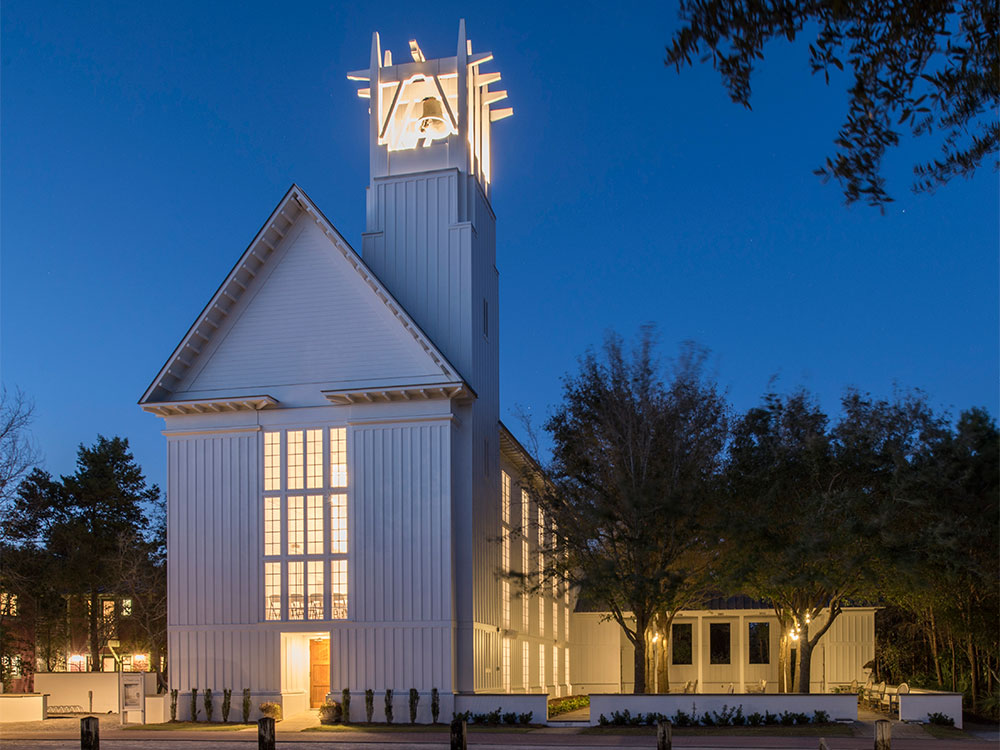 “If you take these vernacular structures, they are a single, small set of problems that have often been thought about by a lot of large groups of people, and often a large group of people over generations and a period of time,” Merrill explained. “They usually end up settling on the sort of core issues and they get to the very most basic things about the program and there’s something about the sense that knowledge is acquired by groups of people, rather than through inspiration, that it’s kind of a slog. It requires a lot of people and it often requires a great deal of time. So one thing I like about the vernacular is that it requires a lot of people to refine it and it’s not something where you’re struck by inspiration as an individual.”

Merrill’s ability to leave himself out of his work is brought up time and time again by his peers, who often acknowledge Merrill’s simplistic and modest approach to his work.

“He was able to help designers who tend to have fragile egos make their designs better without feeling that they were being attacked,” said Robert Davis. “He brought a calmness to the design of houses that we thought was really important at that point. People wanted to build bigger and fancier houses with each other to get people to pay attention to them – look at me, look at me.”

“Scott has this enormous patience,” said Léon Krier. “He really studies all the preconditions to design and integrates them, rather than you doing a beautiful design and then being in a torpedo and torn about by ridiculous code demands.”

While Merrill’s work may be depicted as stirring the pot between classical and vernacular architecture traditions with a modern twist, for Merrill, it’s not that simple.

“The classical/vernacular spectrum versus the modernist is a framework that just doesn’t help me understand anything , and so I don’t consider myself like anti-anything,” Merrill said. “Vernacular might have the sense of being local, it might have the sense of being almost lowly, or common sense. Classical architecture can be thought of as a spectrum from relatively low buildings, vernacular, practical buildings to the most refined buildings imaginable. The buildings that are models for you are the result of a tradition – problems worked out and solved. And usually the buildings are relatively simple. They’re recurring. They’re solutions to recurring problems.”