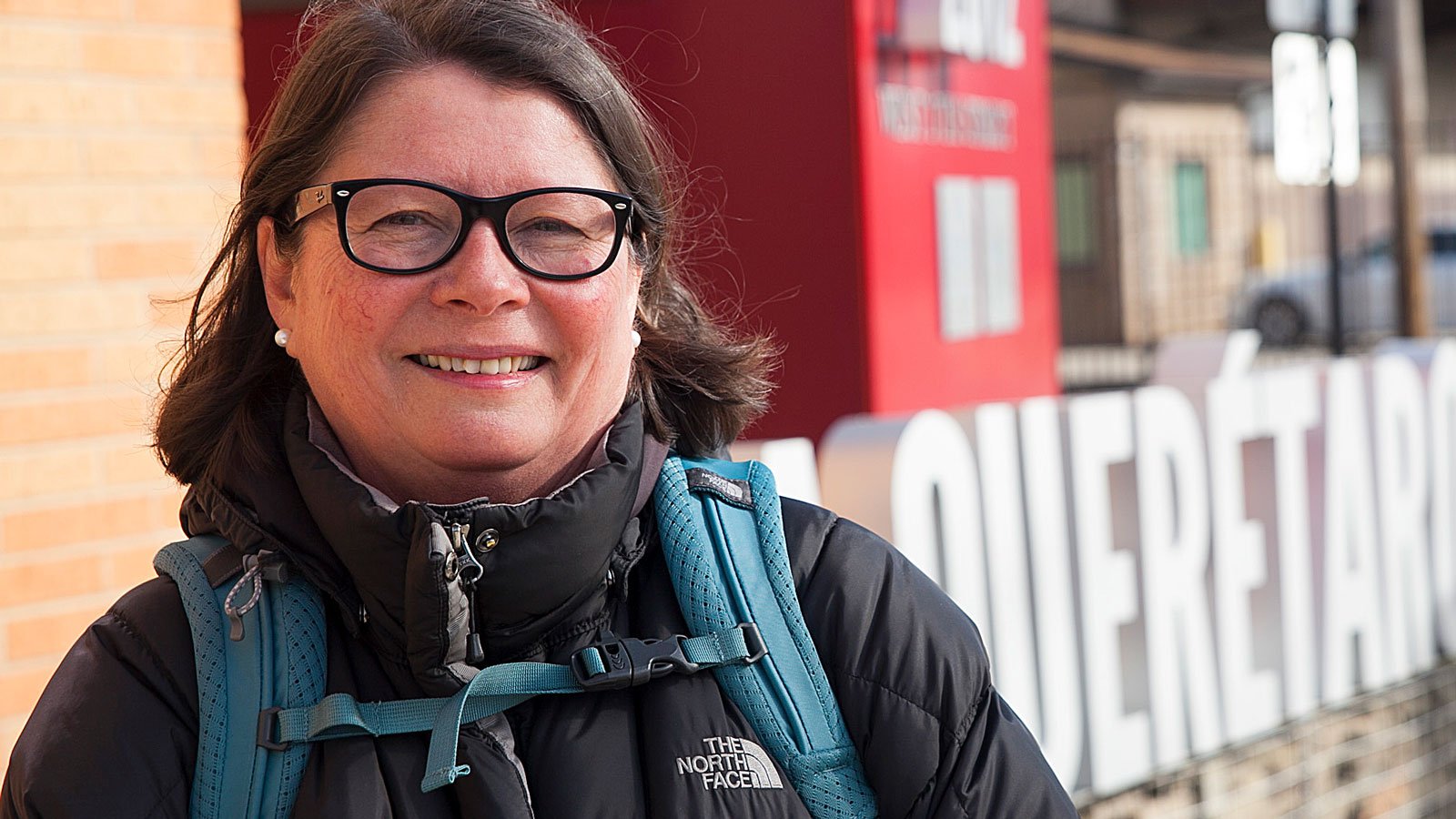 Guacolda Reyes remembers the moment she first came to the Pilsen neighborhood, nearly twenty-five years ago.

“I was learning how to drive and my husband told me, ‘Be careful, because when you cross the viaduct, the neighborhood is going to change.’”

It was fewer than two miles from her home on the University of Illinois at Chicago campus, but it was worlds away.

“I saw a lot of abandoned buildings, disinvestment, garbage, old cars, graffiti, broken sidewalks,” she said. “I was like, ‘What happened here? It’s like nobody cares.’”

“I thought that my country, in Chile, we were poor. I thought, ‘No, there are poor people right here, right next to me.’”

Reyes has always been driven by a desire to change things. Born and raised in Chile under the dictatorship of Augusto Pinochet, she worked for the Catholic Church as a young community organizer on the outskirts of Santiago. There, she says, she was taught the Jane Addams method of community engagement, which she sums up as:

“You don’t give them a fish; you teach them how.”

It is an approach that she has implemented as an extremely effective organizer for and creator of affordable housing with The Resurrection Project (TRP). During the past twenty years, Reyes went from intern to VP of the organization and helped develop more than 550 affordable units in Pilsen alone.

In Chile, she said, people were starving due to high unemployment. “So we began teaching them how to do organic vegetable gardens in their backyards,” she said.  “It was a job that we did in a very careful way.”

She and her husband never intended to live in Chicago permanently. They came for school, and her research brought her to Pilsen to meet the young leader of a fledgling community organization, then called the Pilsen Resurrection Development Corporation. They had just moved their headquarters to the shuttered St. Vitus church.

“I go to this church office and this rectory that is just dark and gloomy, and there were only two people,” she said.

But with only two staff members and the strength of six Catholic parishes behind them, they were galvanizing a whole community. Raul Raymundo, CEO of The Resurrection Project, told her about their work and their plans: building two dozen new, affordable homes on land donated by the city; walking dozens of families through the process of building credit and getting pre-approved for low-interest mortgages; creating a cooperative to teach construction skills to laborers in the neighborhood; and working with current homeowners to secure low-interest loans to fix-up their run-down, century-old buildings.

Reyes said she had a vision for creating real change in Pilsen.

“And in that environment, to meet this leader, with that kind of energy and enthusiasm…I never expected that. I never forgot that,” she said.

The admiration was mutual. He offered her a job on the spot.

Her first task was to create a land inventory in Pilsen. Whenever she could, she’d get a male colleague to accompany her and head out early in the morning, before Pilsen came alive. She catalogued every vacant lot in the neighborhood.

Of course, there were always surprises.

“We were never in the middle of shootings,” she said, “but we were in areas where clearly, you could see things were not right.”

One time, she says, they were nearly plowed down by a group of gang members chasing someone with a baseball bat.

But she carried on and eventually her inventory helped TRP strategize. They figured out which lots they wanted to target for redevelopment, and in June 1993, they invited Mayor Richard M. Daley to a public meeting.

Officially, the event was held to celebrate the construction of their first two dozen homes. There were mariachi bands, a mayoral entourage and a crowd of about 350 people gathered in the plaza outside St. Vitus.

“The mayor was so happy,” she said. “We were celebrating that he provided funding for [the] first 24 homes.”

She said that he knew they were going to ask for more lots, but he had no idea what was coming.

The organization orchestrated an entire series of events. TRP members stepped up the microphone, one by one. Many of them thanked the mayor for his help, and many had very specific requests. They asked for a team of beat cops that would work more closely with the community. They asked for 35 more lots, in addition to the 69 Daley had already given them.

“He had to say yes, because there were hundreds of people in front of him,” she said.

The next day Raymundo got a call from city Housing Commissioner Marina Carrot, who chewed him out for confronting the mayor.

“But at the end of the day, we got our lots,” said Reyes. “We thought there was going to be retaliation, but it didn’t happen.”

But most people in Pilsen weren’t even close to being able to afford to buy a home – no matter how affordable. So Reyes began looking into whether the organization, which soon became The Resurrection Project, could get into the business of rentals.

Reyes says she inspected dozens of available properties, many of which were in horrible shape.

“We saw people with children living in conditions that were unbelievable to me,” she said. “The conditions, the disinvestment, the dilapidation were pretty significant.”

Many of the apartments clearly had peeling lead paint or exposed asbestos, and shared public bathrooms with toilets but no place for tenants to bathe.

“In some apartments, there was no electricity, or we went in the middle of the winter and there was no heat. Or there were those old space heaters, or there’s only one outlet so you have electrical wires going all around. Babies in diapers, barefoot, and walking around.”

It strengthened her determination to start an affordable rental program.

At the time, several city and federal programs incentivized large-scale affordable housing projects, but nothing that could fit with Pilsen’s pre-existing housing stock, which included many three- and six-unit buildings.

So they fought to create such a program.

Reyes and her colleagues approached the city department of housing with a plan to create a small building development program. After many meetings and much negotiating, they succeeded.

Reyes said that, at first, they met with fierce community opposition from the “Not In My Backyard” crowd.

“People were not happy with the project because they were saying that families from public housing were going to come here, it was going to be an eyesore for the community, there was going to be violence and parking problems,” she said.

She had two small children at the time, and she pushed her stroller around the neighborhood, knocking on doors and explaining TRP’s vision for rental housing.

“I would say, ‘What I want for these families is what I want for my girls: to have their own bedrooms, to be in a decent, safe environment,” she said.

They held a public meeting on the proposal, which got heated. But Alderman Danny Solis sided with TRP, which was already developing a highly organized base and becoming a powerful force in the neighborhood.

“After that, I think people understood what TRP wanted to do, so there was no more opposition,” she said.

Since that time, the organization, with Reyes as its VP of real estate development, has built or remodeled 387 rental units in the Pilsen neighborhood, among them homes for seniors and for students attending college.

They’ve also started replicating their model in other low-income areas.

“What we’ve done here in Pilsen, there is a recipe here that can be replicated,” she said. “Maybe it’s not going to be a perfect apple pie, but it will work.”

Reyes has also taken the lessons she learned in Pilsen and at TRP and applied them citywide. In 2014, Mayor Rahm Emanuel appointed her to his Affordable Housing Task Force, which reworked the city’s Affordable Requirements Ordinance in an attempt to increase the affordable housing stock. 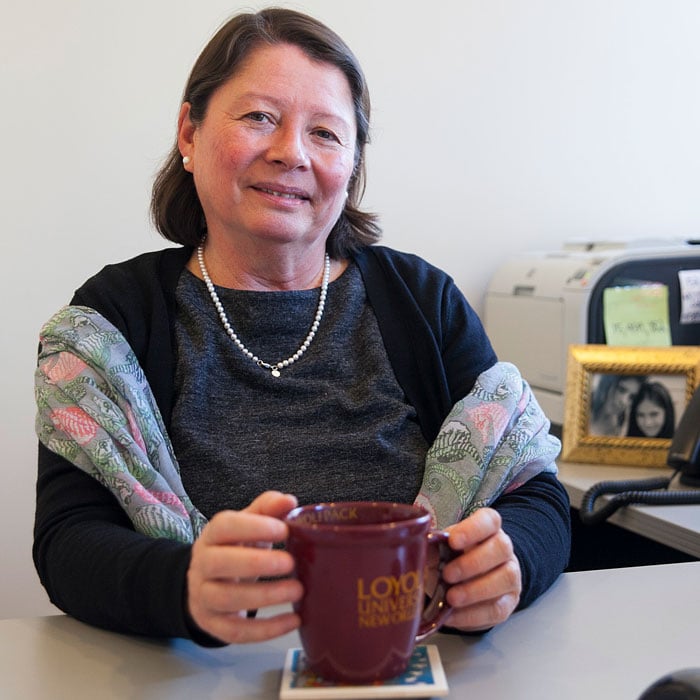 Guacolda Reyes sits in her old office at The Resurrection Project, surrounded by photos of her two daughters and her husband. Photo by Kaitlynn Scannell

In March 2017, she accepted a new position with the Chicago Metropolitan Housing Development Corporation, where she’s already begun looking for new opportunities to create affordable units in other Chicago neighborhoods.

She was recently elected to TRP’s board of directors. She said that the organization still has its work cut out for it, and as an affordable housing advocate and a Pilsen resident, she still has a vested interest in their work.

“Because we did an amazing job in stabilizing the community and making it into a strong, stable community, we have gotten the attention of other developers that are not really interested in preserving the culture, the history of the community,” said Reyes. “They are interested in the bottom line.”

The improvements in Pilsen have presented a new round of challenges. The Latino population decreased by 26 percent between 2000 and 2010, and the number of upper-income residents increased. Meanwhile, the percentage of residents who spend more than 30 percent of their income on housing has climbed from 25 to 30 percent.

She says that it makes their work even more vital.

“Because if we don’t do something about it, we’re going to truly displace and transform the community to the point that we’re not going to recognize it,” she said. “We have to continue fighting now for a healthy balance.”