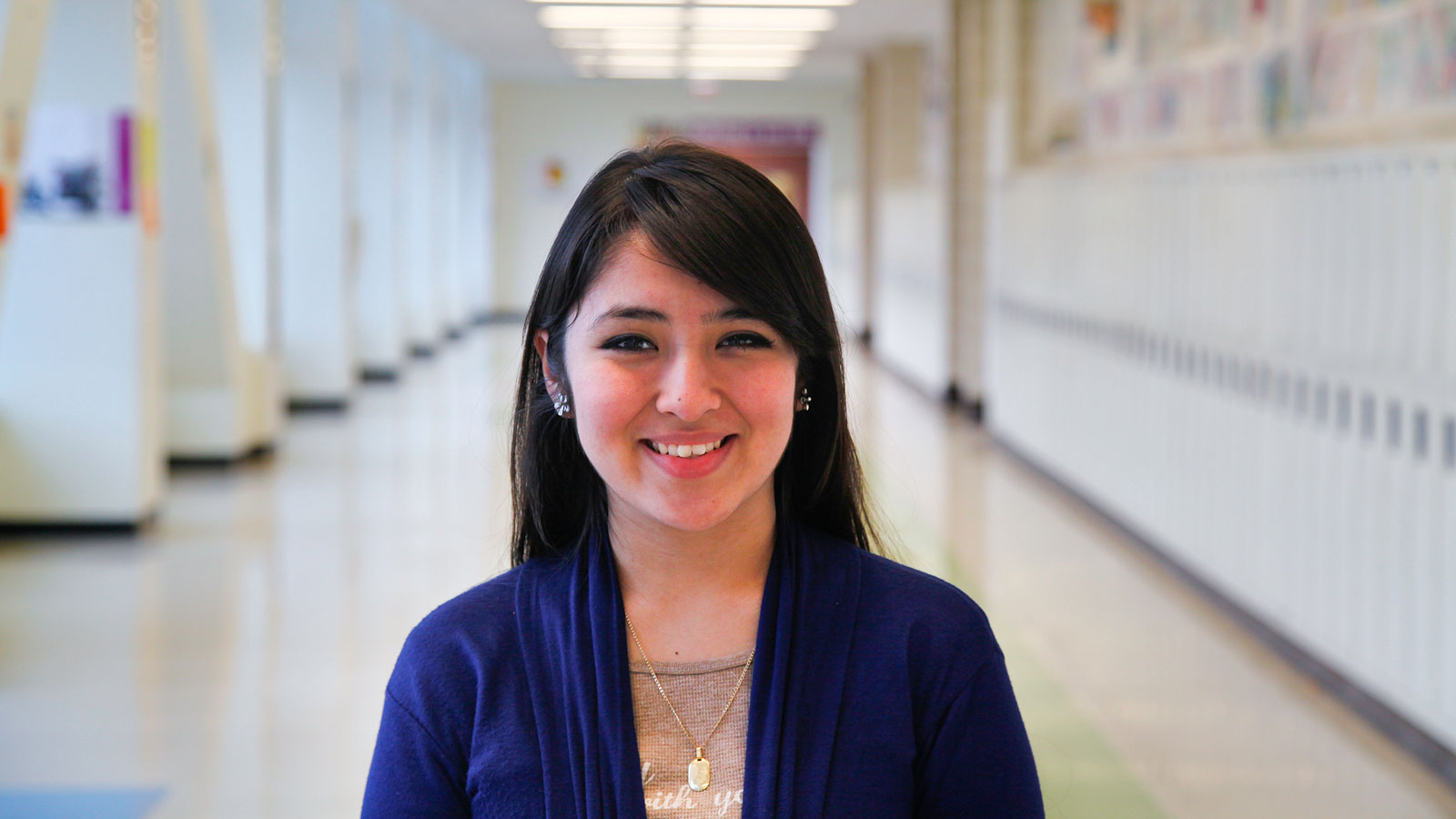 Daniela Chavez, 18, walks through the halls of Benito Juarez Community Academy with an air of authority, like a high school senior just months away from graduation.

Around her neck, she wears a monarch butterfly wing encased in a glass bead. She says it is a reminder of the migration of the monarchs. Every year, they make the astounding 3,400-mile journey between their winter homes in Canada and their summer homes atop the pine and fir forests of Daniela’s native state of Michoacán, Mexico.

Chavez is a born leader. She’s ambitious, serves on the student council, and is one of the key organizers of a support and advocacy group for undocumented students at Juarez. The students decided to name the group Monarcas in honor of the monarchs and their journey.

“It resembles the immigration and the struggles our families go through to come to the United States for a better future,” she explains.

Guidance counselors Eliana Carbajal and Maritza Chavez (no relation) created Monarcas in 2015 to provide support for the school’s undocumented students, many of whom are still “afraid to come out of the shadows and disclose their status,” said Maritza Chavez, discouraged about the lack of opportunities that await them after high school.

“I know I’m undocumented, but I’m not afraid,” she says. It’s clearly not the first time she’s made the declaration.

Chavez and the other Monarcas have spent much of their time since the 2016 election organizing immigrant rights workshops, planning fundraisers for scholarships, and applying to colleges. Chavez says she cherishes the group and “trusted all of them immediately.” 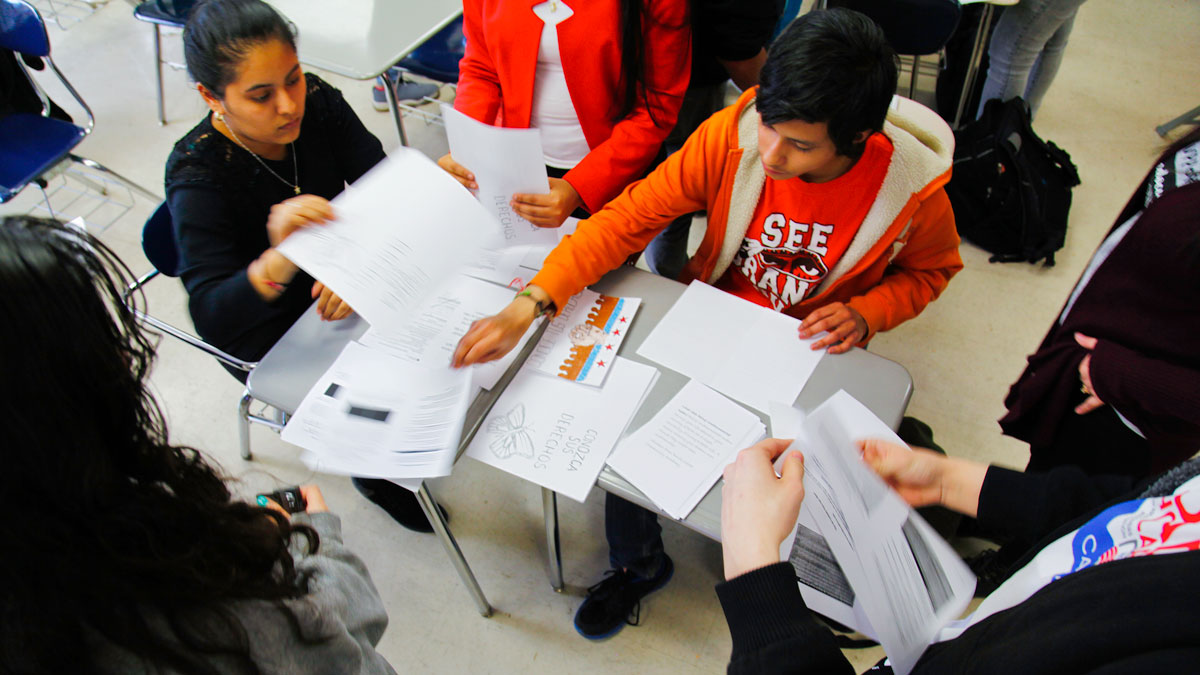 “We all have the same struggle,” she said. “Our only dream is to go to college.”

In 2003, Illinois state legislators, responding to pressure from immigrant rights advocates, made in-state tuition available to undocumented Illinois residents at state schools, ending the long-time practice of treating them as international students when calculating their tuition costs.

However, those students are still not eligible for government-sponsored, need-based loans and grants, nor can they apply to several private scholarships. Six states currently offer some type of financial aid to undocumented college students who are longtime residents, but Illinois is not one of them.

As a result, for many, higher education remains out of reach.

Chavez says that when she was growing up, she never understood that her legal status would be such an obstacle. Her parents left Mexico when she was two. She always thought her status was just a matter of paperwork.

Her younger sister was born in the U.S. and, she says, “I just always compared my birth certificate to my sister’s and I thought mine is way cooler because it has way more information.”

Her sophomore year at Juarez, Chavez attended a college fair and learned about the Free Application for Federal Student Aid, or FAFSA. It’s the form that colleges and universities use to determine a student’s eligibility for loans, grants, and scholarships.

But she was told that she wasn’t eligible to fill it out. She said it took a minute for that to sink in.

Chavez decided to get a job and start saving. She lives near a Target and applied there first.

But the online form wouldn’t accept her Individual Taxpayer Identification Number, or ITIN.

Her mother, who has worked in a factory and earned minimum wage all of her life, never encouraged Chavez to go to college. She told WTTW that she always thought it would be prohibitively expensive.

“No contamos con esta cantidad,” she said. “We don’t have that kind of money.”

She’s already working two jobs and raising two daughters by herself. She’s afraid Chavez will get her hopes up and then be heartbroken if she isn’t able to secure enough money to pay upfront.

But Daniela brushes off her mother’s words of caution.

“I think she’s just afraid that I’m going to leave,” she said.

Daniela Chavez’s father abandoned them soon after they arrived in Chicago. Her mom became pregnant again years later, but that baby’s father disappeared during the pregnancy. They lived with her aunt and uncle until the baby came but were asked to leave when they got home from the hospital. Her uncle, she said, didn’t want to add a newborn to an already crowded house.

For a while, it was just the three of them in a one-bedroom apartment. Chavez says she was only nine but spent a lot of time taking care of the baby, especially when her mother worked the night shift.

“She had to go back to work after her forty days,” she said.

Chavez says that her mother is always tired. She works long hours in a factory, a circumstance she attributes to her immigration status and her level of education.

She’s determined that her life will take a different path.

Today, Chavez, her mother, and her nine-year-old sister are back living with her aunts and uncles – four families and ten people in one three-bedroom apartment. She loves them, she says, but it’s cramped, it’s loud, and it’s difficult to study there.

They all make fun of her and call her la abogada, or the lawyer, because nowadays, she’s adamant about informing people of their rights. They all wanted to pack their bags and leave immediately after President Donald Trump was elected, but she told them no.

“They don’t realize that although we’re undocumented, we still have rights in this country,” she said. “And I think that’s why so many injustices are done – because people don’t know about their rights, and they allow themselves to be treated [poorly].”

She’s learned a lot about her rights since the election.

The halls of Juarez were quiet on November 9, 2016, where 94 percent of the student body is Latino. Administrators don’t ask students to disclose their immigration status, but it is estimated that roughly 8,000 people in the neighborhood – more than a fifth of Pilsen’s population – are undocumented. Many students stayed home that day. Those who came to school were subdued and spoke in hushed tones. 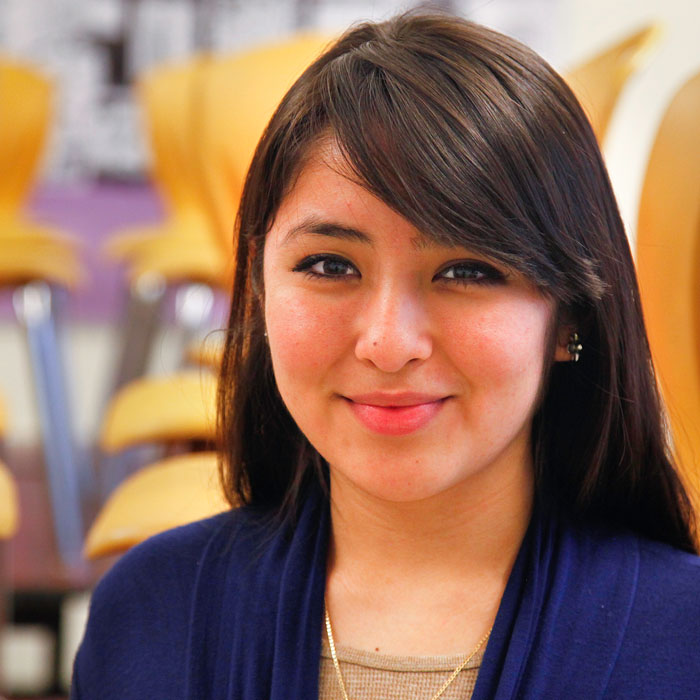 Counselor Maritza Chavez said it was a drastic departure from the usual bustle.

“Usually, there’s a lot of movement, a lot of noise, a lot of positive energy,” she said.

Principal Juan Carlos Ocon held an emergency meeting that morning with all school counselors. Later in the day, Maritza Chavez reached out to all of the Monarcas and told them to come her office if they wanted to talk.

“A lot of our students were afraid and they didn’t know how to seek help,” she said. “It was definitely very, very hard for them. They are worried about separating from their families.”

Before the election, the group spoke mainly about applying to colleges, raising money, and searching for scholarships. Now, she said, “They’re not thinking ‘Oh, let me go to school and get my education.’ They’re thinking, ‘I’m illegal here. I’m at risk of getting deported. My life is at risk.’”

Daniela Chavez says that she’s scared, but more than that, she’s angry about what she calls Trump’s “open racism” and his positions on immigration that could affect her family and her community.

“My home is here, in Chicago,” she said. “And I felt very offended when this man was like, ‘You guys all have to go back.’ Because, no, this is my home. This is the only place I’ve ever known as home.”

It has been unclear whether President Trump intends to dismantle Deferred Action for Childhood Arrivals, or DACA, a program signed into law by President Barack Obama through an executive order in 2012 that currently allows many immigrants like Chavez to obtain temporary relief from deportation, receive work permits, and attend school with some degree of security.

During his campaign, Trump pledged to end DACA protections. However, since taking office, he has softened his rhetoric, calling it “a very, very difficult subject.”

“I’m so upset that my college years are going to be during his presidency,” she said. “What if at the last minute my education becomes at risk because of him?”

She also questions his judgment.

“He tweets about everything. I’m like, ‘What are you [doing]?’ I don’t even think a teenager tweets that much,” said Chavez.

Soon after the election, Principal Ocon enlisted the student council to help coordinate an assembly on the rights that immigrants have under the law. They invited immigration attorneys, representatives from The Resurrection Project and Pilsen Neighbors Community Council, and Alderman Danny Solis to help.

Chavez was a key organizer of the event and shared her personal testimony in front of hundreds of students, teachers, parents, and Amy Rule, wife of mayor Rahm Emanuel.

Afterwards, she was interviewed by Telemundo and, along with other undocumented students, was invited the mayor’s home for dinner.

She said the experience motivated her to do more. She approached her pastor and helped organize an event in March at her church wheremore than 60 lawyers advised undocumented immigrants on how to establish legal guardianship plans for their children in case of unexpected detention or deportation.

She’s since been talking with Principal Ocon about hosting a similar event at Juarez.

“I’m trying to help empower my community more and I think that’s giving me the strength to stay firm and not break down,” she said.

For now, she’s concentrating on what she can control.

She and the other Monarcas are educating people in their community about what they can do to protect themselves, such as refusing to open the door and knowing which types of warrants do and do not give federal agents the right to enter someone’s home. Several Monarcas and members of BuildOn, a service learning non-profit, recently spent a cold March afternoon sharing that information with Pilsen residents along 18th Street. 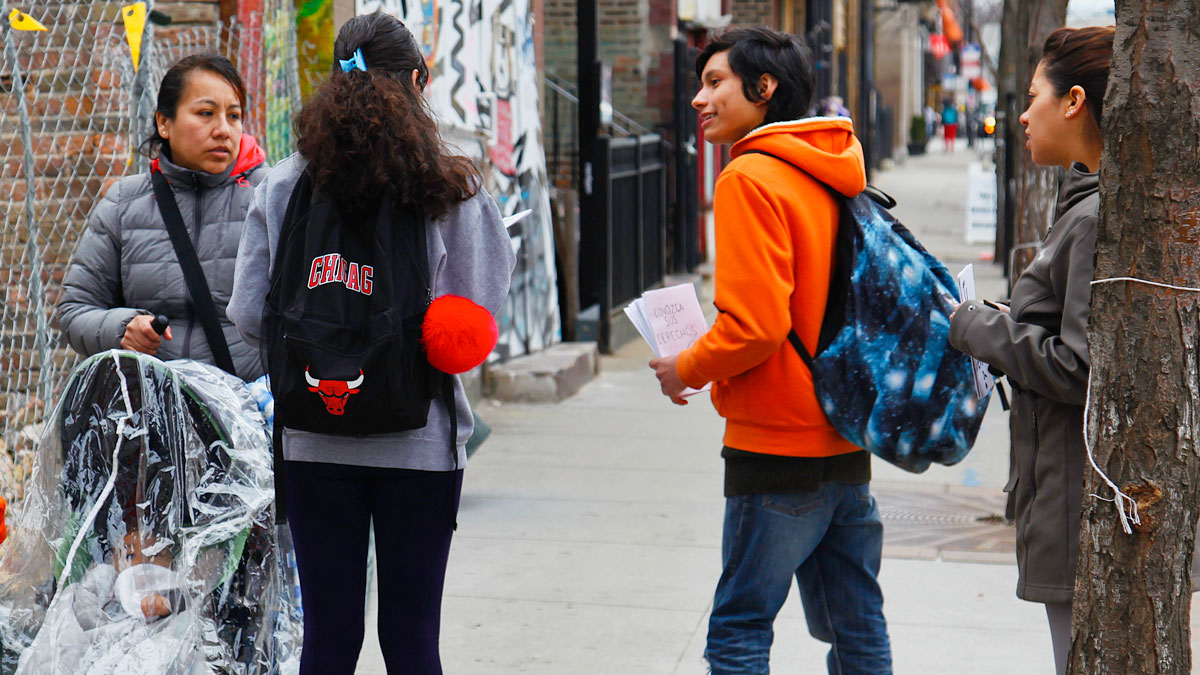 The Monarcas are also organizing a parents’ dance this spring where they’ll hold a raffle, sell food and drinks, and raise money for their scholarship fund. Whatever they earn will be split equally among undocumented students involved in the group. Last year’s event pulled in nearly $500 for each undocumented student.

And they are working hard to apply to every scholarship they can find that will accept them as candidates.

Chavez said her mom has recently become more supportive of her desire to go to college.

“I think she’s changed her mind a little bit because she’s seen me coming out of the shadows,” she said.

“She’s seen how much all of this has changed me, and I think she can see me succeeding.” 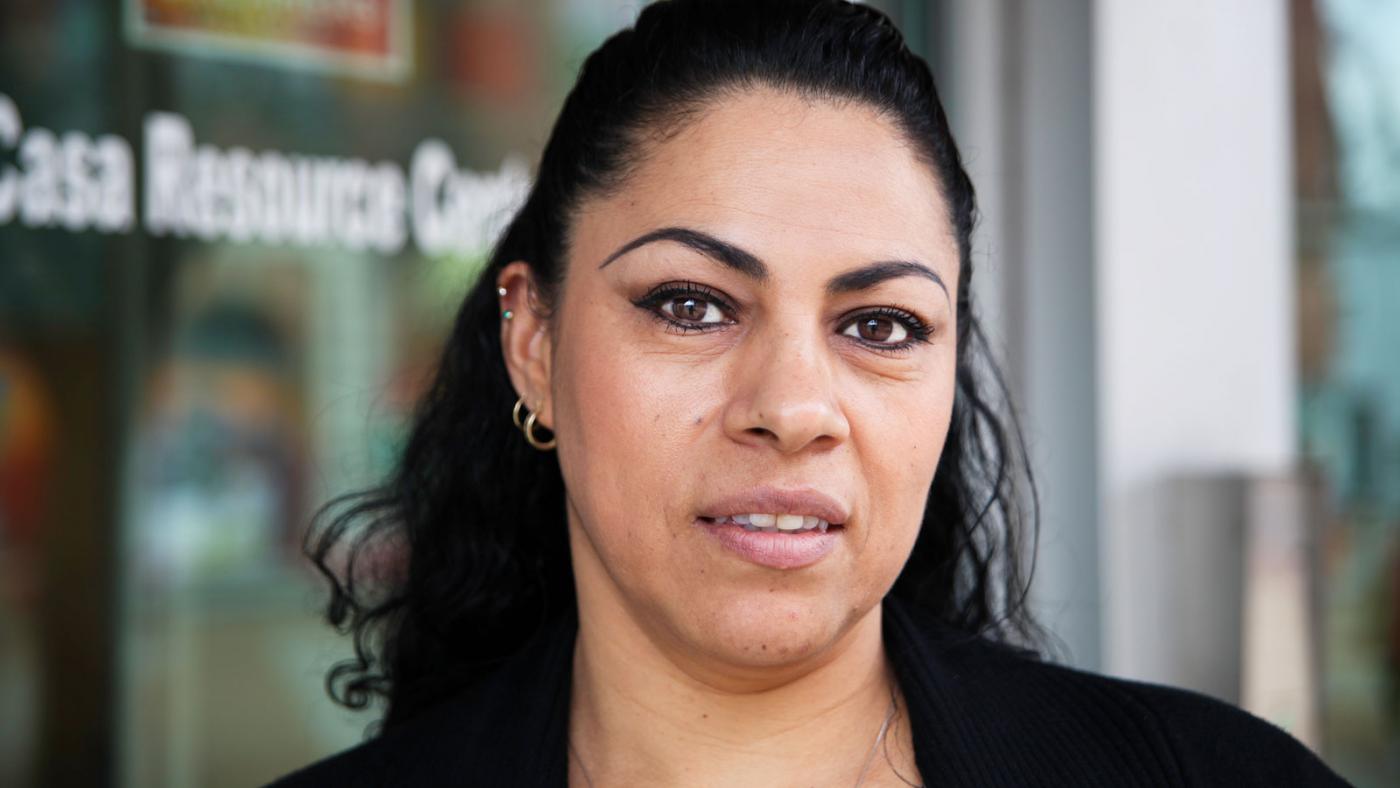