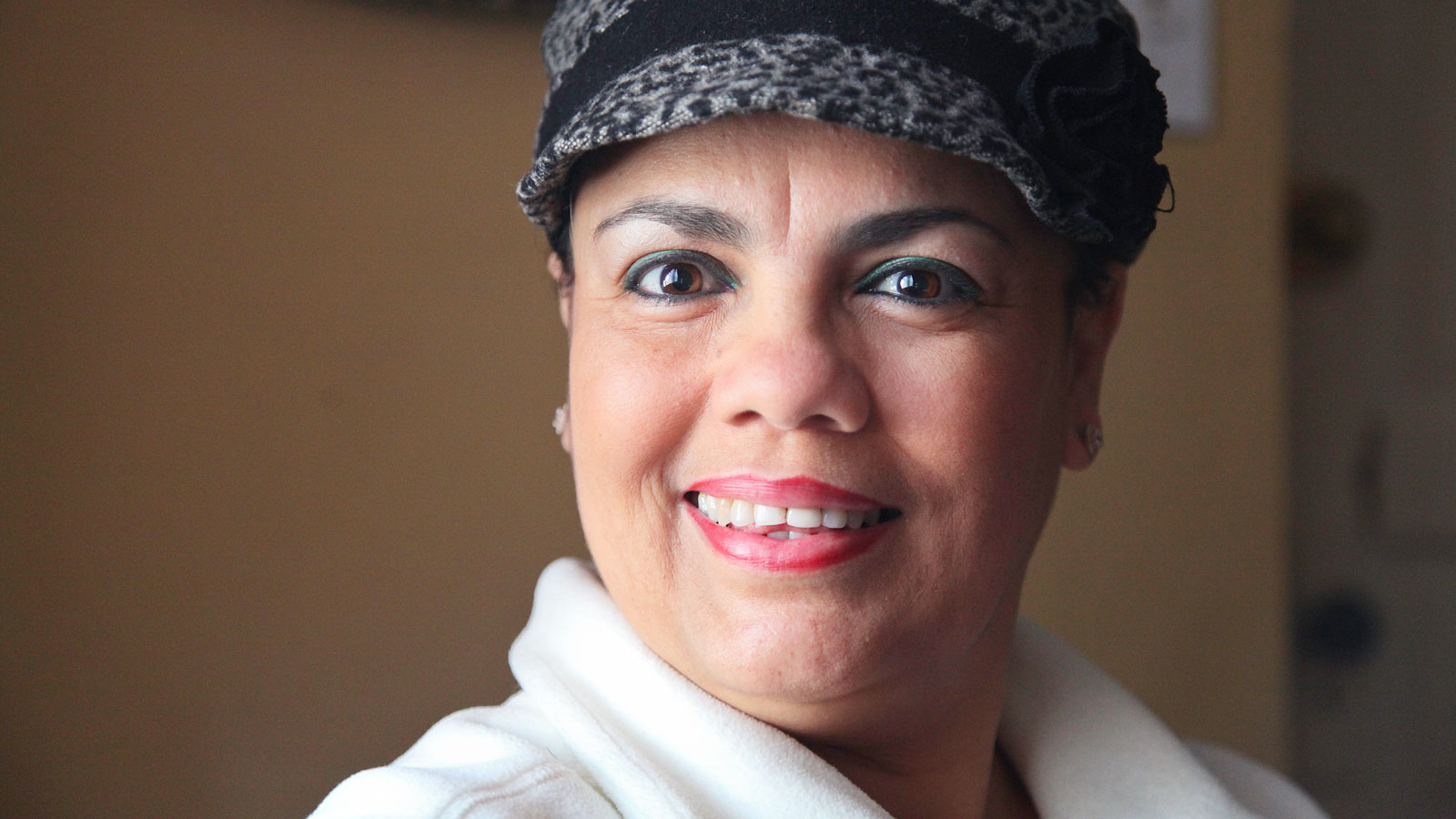 When it comes to talking about breast cancer in her community, “es un tabú,” it’s taboo, said María Medina, a 67-year-old cancer survivor and a health educator for ELLAS (En La Lucha A Sobrevivir, or In The Struggle To Survive in English an organization for Latina breast cancer warriors that gathers bimonthly in Pilsen.

“We get shy about strangers looking at our breasts. Sometimes the husbands don’t like it, and it’s difficult to share something so intimate with your kids,” Medina said. “Unfortunately, this is enough for some women to not get tested.”

The social stigma is just one reason that Medina dedicates much of her free time to ELLAS, a breast cancer support network that not only provides emotional support to women battling breast cancer, but also facilitates access to free or reduced medical care and supplies for those who lack health insurance.

Without this kind of support network, many Latinas with breast cancer describe feeling isolated during their journey. Medina said that when she was diagnosed, she had little background information about the disease, and her doctor was cold and did not explain what the diagnosis meant.

“I was in shock. I didn’t know whether I should cry or get dressed,” she said.

A lack of information about prevention and detection, intimidating medical costs, and cultural attitudes are just some of the barriers that keep women from being tested for breast cancer and following through with treatment.

In fact, the Latina demographic has the highest mortality rate in Illinois and the United States.

Roughly two-thirds of ELLAS members are undocumented women from Mexico and Central America. Their legal status lowers their rate of survival, often making it difficult for them to navigate the hospital system on their own.

When a woman is diagnosed with breast cancer, ELLAS holds her hand through the next steps of her treatment all the way through recovery. Volunteers provide transportation to her appointments, babysit or find a sitter for her children, get her medications, obtain the medical accessories she needs post-surgery, and offer a shoulder to cry on. The women stay connected through text messages.

ELLAS is part of the Metropolitan Breast Cancer Task Force of Chicago, the American Cancer Society, and the Latina Association for Breast Cancer (ALAS). They combine resources to conduct workshops at local festivals, neighborhood schools, street fairs, and churches with high attendance, such as St. Pius and St. Agnes. 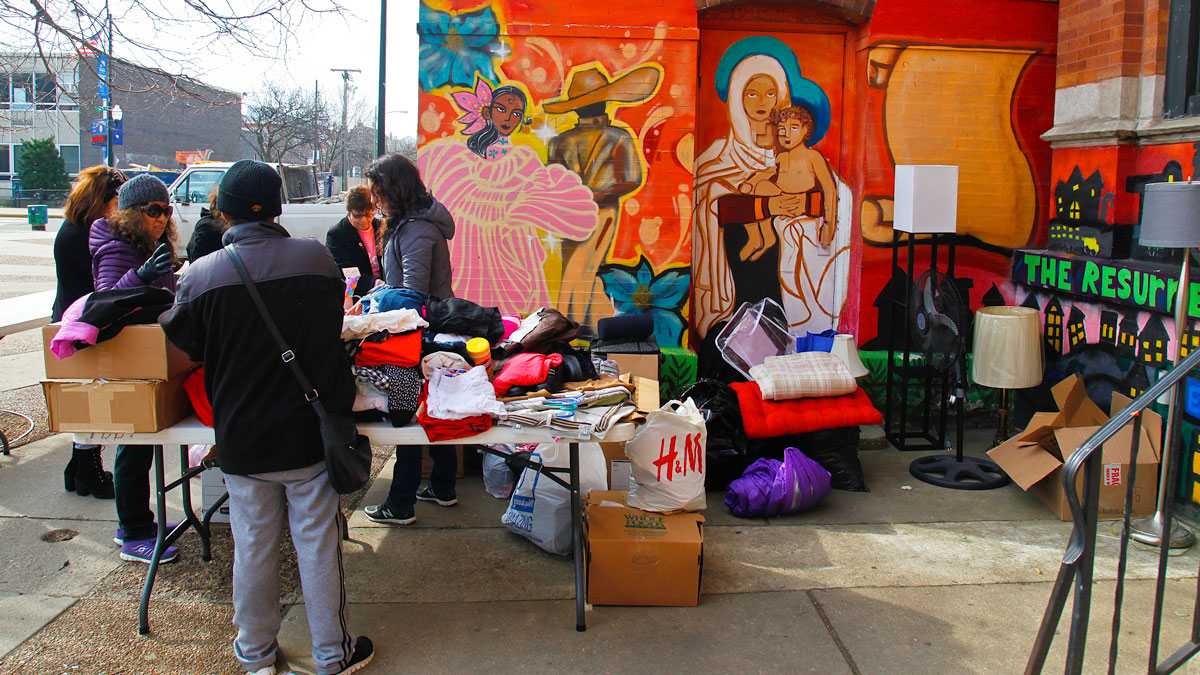 ELLAS members donate clothes and other household items to raise money for the organization. Photo by Kaitlynn Scannell

Both ALAS and ELLAS collaborate to provide prosthetic bras, wigs, and prostheses for women dealing with the effects of chemotherapy and surgery. These accessories are helpful for survivors who have had a mastectomy, the removal of part or their whole breast, to take control of their body image and regain their self-esteem. 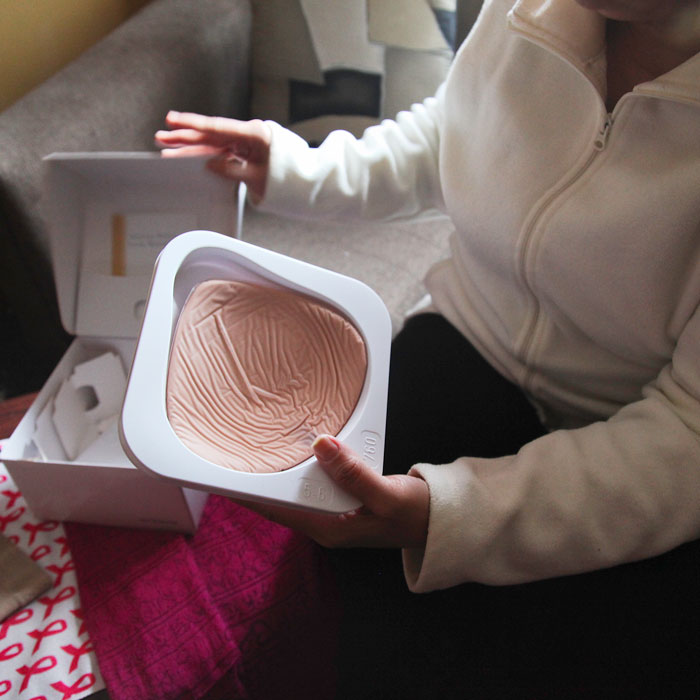 Denia Perello is a breast cancer survivor and a member of ELLAS. Photo by Kaitlynn Scannell

“At first I considered going without treatment because I didn’t want to remove my left breast or lose my hair, but ELLAS helped me cope with my surgery and chemo. The wigs make me look fabulous,” she said.

In 2012, Araceli Lucio, a health advocate at The Resurrection Project (TRP), noticed that many Latinas she talked to had no knowledge about the cancers that affect women. As an immigrant woman, Lucio knew from experience that preventive information was not available to people like her.

Through the connections she had with health practitioners through her work at TRP, Lucio began to organize a carpool for women from the community to local hospitals. There the women met other patients and developed a support system.

Within a few months, Lucio couldn’t fit any more women in her car. That’s when the group knew it was time to form a support group in the community, and they asked TRP to provide them with a space to meet.

Although ELLAS has a humble budget, it stays afloat through donations, annual fundraisers, raffles, and woven bracelets which the women make themselves. Lucio is also looking at factories in Mexico that could mass-produce prosthetic bras at a much more economical price.

Chicago has the lowest mammogram screening rates in the nation, according to the Dartmouth Institute for Health Policy. And while there is not enough data about the Latina population with breast cancer, the 2008 report found that Latina women get tested less than white women and even less than black women in the city.

In 2016, the City of Chicago Department of Public Health reported that 8,625 uninsured women in Chicago who are the recommended age for mammograms had not had a screening in the previous two years.

ELLAS works closely with hospitals that offer these services and other financial aid for low-income patients. Typically, a mammogram can cost as much as to $200 and a single surgery can cost $4,000. It’s difficult to estimate the high cost of radiation and chemotherapy, because it varies by case.

Lucio and Medina are among the most committed members of ELLAS. They encourage other passionate women to take a series of training events to become health promoters and raise breast cancer awareness through mobile workshops.

ELLAS has grown from five women to more than thirty. The group includes a handful of volunteers, but most participants are breast cancer patients and survivors over 40 years old whose first language is Spanish and who reside in the communities of Pilsen, Little Village, Back of the Yards, and the nearby suburb of Cicero.

Maribel Salinas, 49, is a Mexican immigrant without papers, and when she tested positive for breast cancer, she felt as though her world came crashing down.

Salinas had never heard of the disease. “I thought it was a death sentence,” she said, and she fell into a depression that cost her job and strained her relationship with her husband and her two children.

Luckily, Salinas found treatment at Cook County Hospital at no cost to her, but she had to transfer from the private hospital of her choice, where her undocumented status made her ineligible for financial assistance.

“ELLAS is more than a group, it’s a family. We are not sick, we are not dead. We have the courage to live.”

Her true savior, she said, was ELLAS, because even as a survivor, she felt empty inside and had lost the will to live. While attending the meetings, however, Salinas realized that she was not alone and “has a second chance to do everything I always wanted to do,” such as taking English classes, which she’s currently doing. The shame she had felt for so many years gradually faded as she made friendships with other women who shared her experience.

“ELLAS is more than a group, it’s a family,” she said. “We are not sick, we are not dead. We have the courage to live.” 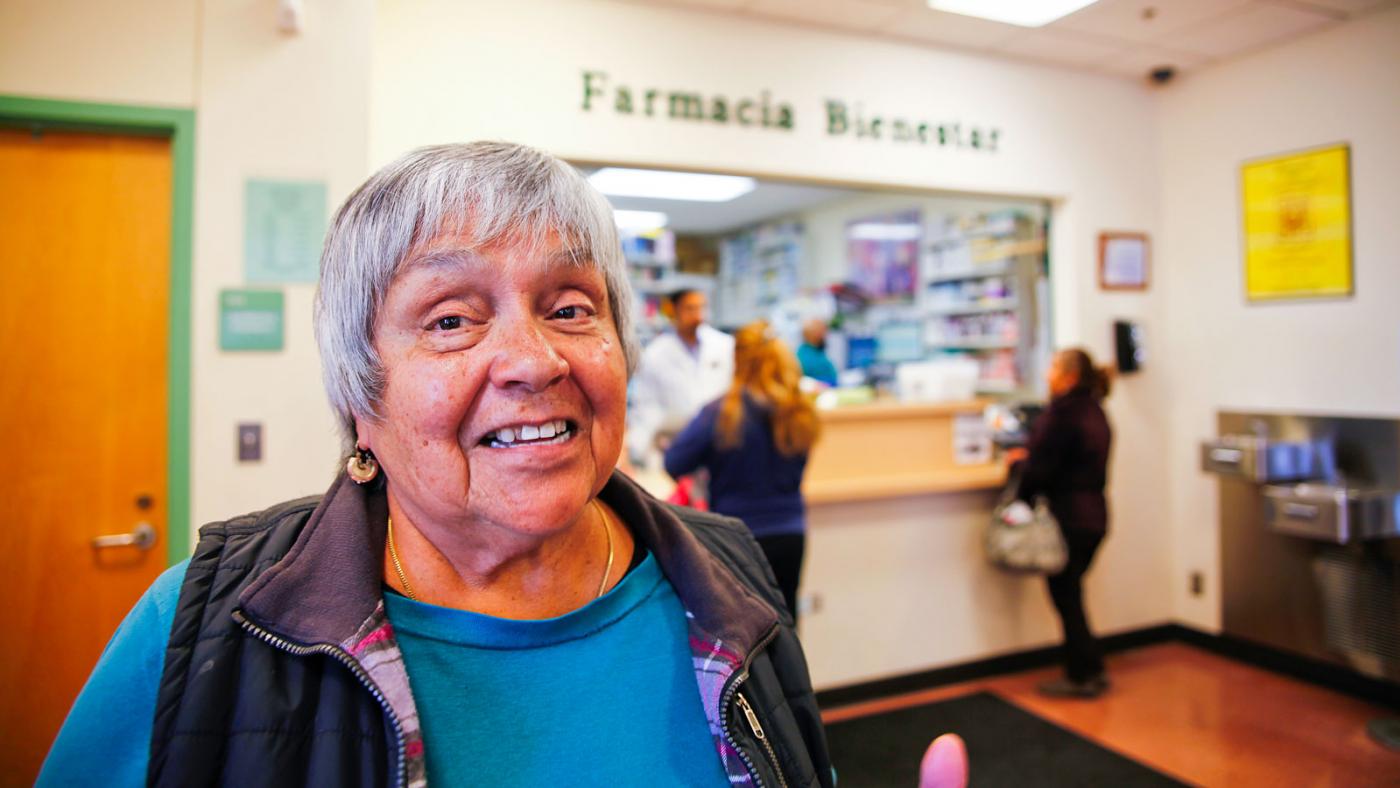 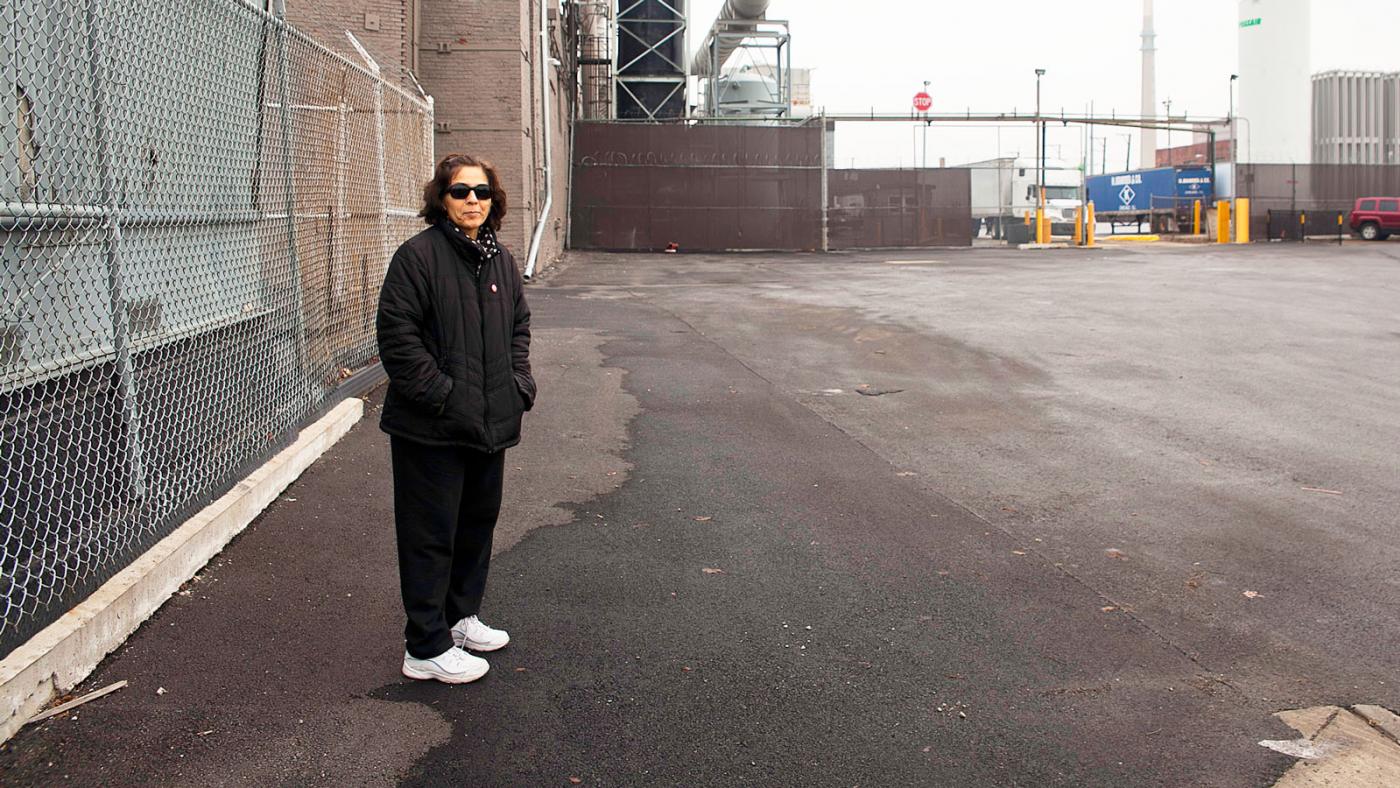