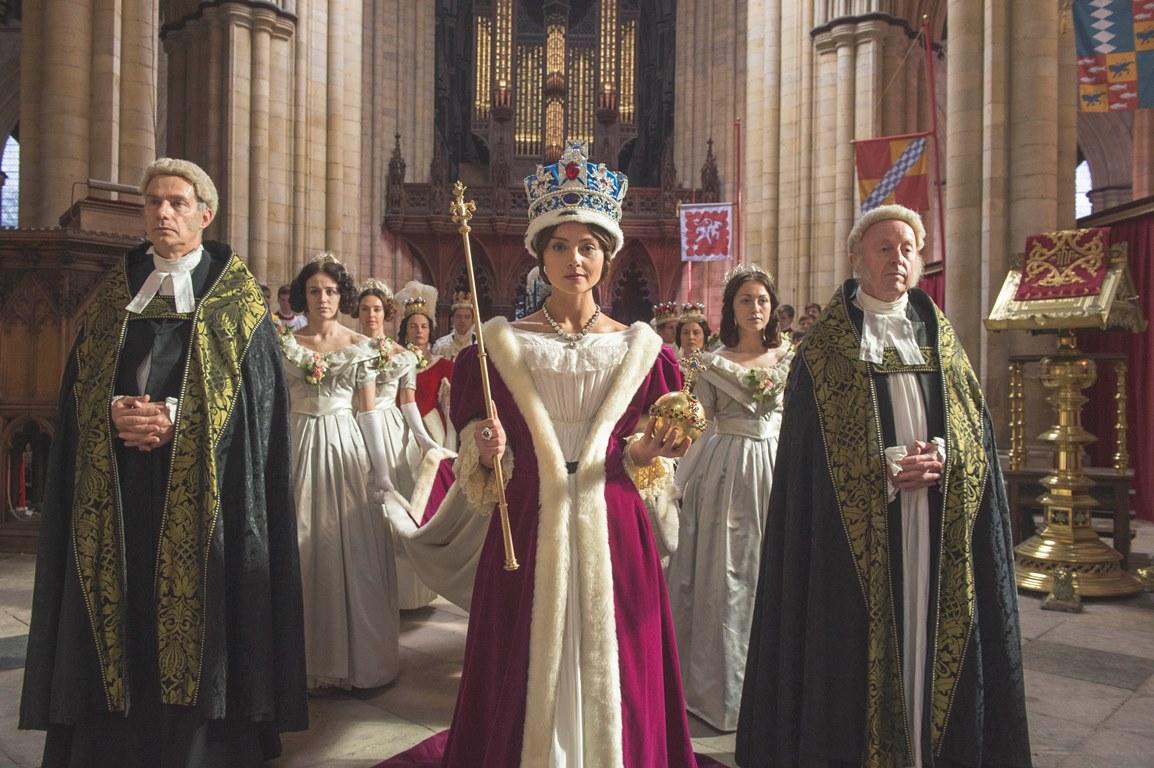 Jenna Coleman is both fiery and regal as Queen Victoria. (ITV Plc)

Read our recap of the following episode. Find all of our Victoria content here. Episodes are available to stream.

In the two-hour season premiere of Victoria, we get to repeatedly watch a petite young woman stand up to some confident, smug older men, and the astonishment on their faces when she fires a zinger at them is worth the entire show. Best of all, she’s the queen, so they can’t make a retort, even if they could come up with one quickly enough to match her.

It’s 1837, and King William IV has just died. The 18-year old Alexandrina Victoria is queen. She’s ready to break free from the stifling oversight of her mother, the Duchess of Kent, and Sir John Conroy, the Duchess’s friend and confidant. No longer does she have to be escorted as she walks down stairs, nor is she required to sleep in the same room as her mother. She can now assert her independence. 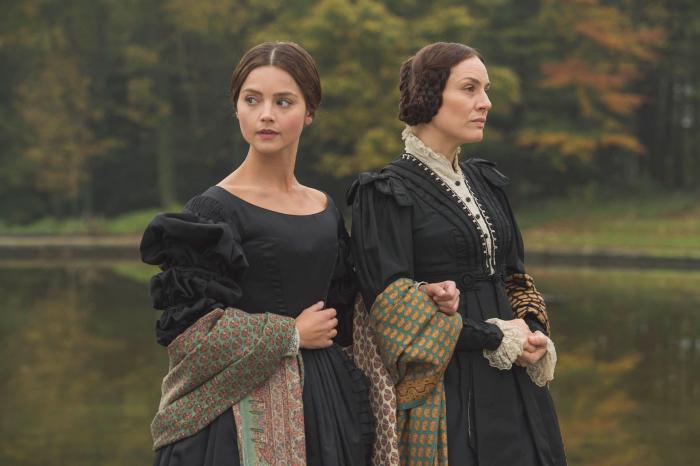 Victoria appoints her governess, Baroness Lehzen, to run her household, against the wishes of her mother. (ITV Plc) Her first step is to appoint her governess, the stern but kind-hearted Baroness Lehzen, as the master of her household. This does not sit well with house manager Penge and dressmaker Mrs. Jenkins, who fear they will not be able to continue their side-business in selling slightly used candles and gloves from the household. Lehzen’s appointment of Miss Skerrett as Jenkins’s assistant stirs up some more bad feeling.

Back upstairs, Victoria has met the Prime Minister, Lord Melbourne, who shows real interest in her feelings about being queen. He offers to be her secretary, but Victoria is trying her hardest to be mature and self-sufficient, so she refuses. She has to go meet the lords of the country, a bunch of hoary gentlemen who expect little from her, and she is understandably nervous. Her uncle Cumberland, who is obviously evil since he has a grotesque scar across his eye like a Bond villain, immediately belittles her by grunting that he can’t hear her. But her confidence is building, and she is determined to prove that everyone has underestimated her. Thus begins her battle to defy presumptions against her age and gender. 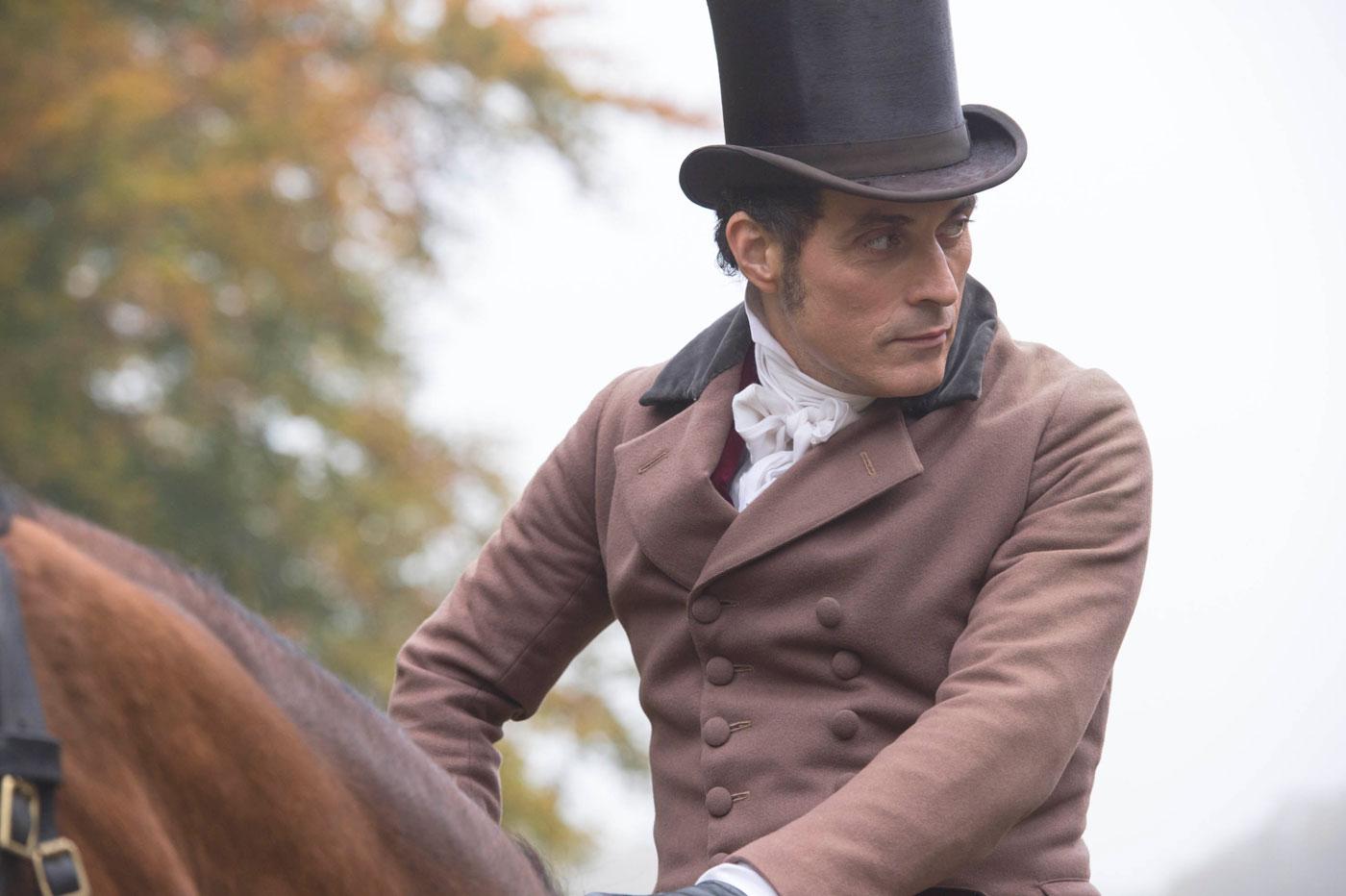 The Prime Minister Lord Melbourne quickly becomes Victoria's main ally in government. (ITV Plc) We really see Victoria’s strength flare into being when Sir John dismissively offers her his aid−how could a girl handle being monarch alone? Steel flashes in Victoria’s eyes, her spine straightens, and any trace of a demure child disappears. “If I require advice I will ask for it,” she snaps. “Sir John, you have our permission to withdraw.” It’s good to be queen.

But Victoria is still an inexperienced girl who has barely been allowed out of her home. When she moves to Buckingham Palace, her eyes glow and she dashes to plop on the throne like a kid playing queen. It’s this delightful juxtaposition of the excitable, impetuous teenager with the imperious, steely queen that makes Victoria such a fascinating figure. One moment she’s cuddling with her dog Dash, the next she’s defying titans of government. 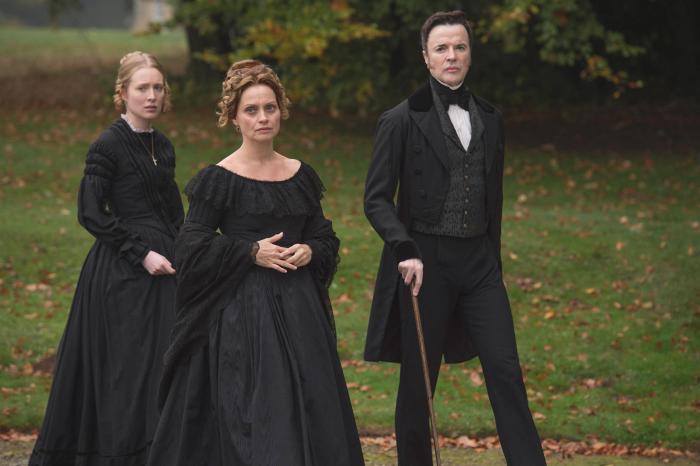 Flora Hastings, Victoria's mother the Duchess of Kent, and Sir John Conroy all try to control Victoria. (ITV Plc) One of those titans does respect her. Victoria has begun to trust Melbourne, who praises her for her “natural dignity,” and she decides to appoint him secretary after all. She also begins to distance herself from her mother and Sir John. They’re still trying to control her, as is the Duchess’s lady-in-waiting Flora Hastings, who figures the condescending "you-need-help-I-know-better-than-you" tack will be more effective coming from another young woman. Nope. Victoria shuts her down.

Victoria’s unchecked dislike for Flora soon gets her in trouble. At her first ball as queen, she notices Flora has a bulge under her dress and suspects she is pregnant by Sir John, then later insults her a bit too obviously. Victoria essentially runs into the same problems a freshman does at her first college party: she has a little too much to drink, is hit on by a slimy guy (a Grand Duke of Russia), and has to be extricated by a friend−Lord Melbourne in this case.

The Queen decides to use Flora’s pregnancy to embarrass her enemies, and orders a medical examination. While Victoria is being crowned, Flora is undergoing the humiliation of probing by two male doctors. Impulsive Victoria has subjected another woman to the indignity of being scrutinized by men−you’d think she would know better, given her everyday battles against belittlement. 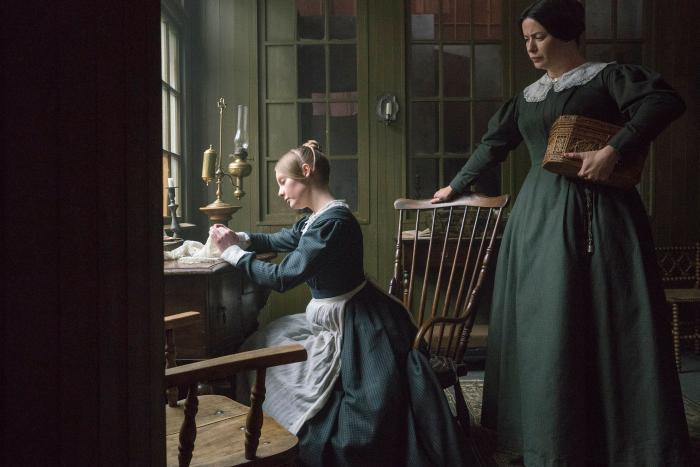 Mrs. Jenkins originally dislikes Miss Skerrett, but Skerrett soon proves herself. (ITV Plc) Turns out Flora isn’t pregnant, but she does have a tumor that soon kills her. Victoria’s reputation suffers after nasty propaganda about the examination is printed. Skerrett also loses face: Lehzen finds out about Jenkins’s selling of the Queen’s gloves, but Skerrett takes the blame, despite Jenkins’s disdain for her.

Lehzen also begins to have gas lighting installed, and a rat infestation is discovered. Sneaky Penge isn’t happy about losing his candle business, so he lets the rats run free. You can almost see him madly grinning as he polishes his coins at night.

Melbourne is forced to step down as Prime Minister, having lost Parliament’s confidence after a tight vote, and Victoria is distraught. After the renowned Duke of Wellington refuses to be the next PM, she is forced to ask Sir Robert Peel. He requests that she dismiss some of her ladies and appoint ones from his own party. But Victoria, desperate for friends, clings to her clique and refuses. It also doesn’t help that Peel tries to tell her what to do: we know how that goes. 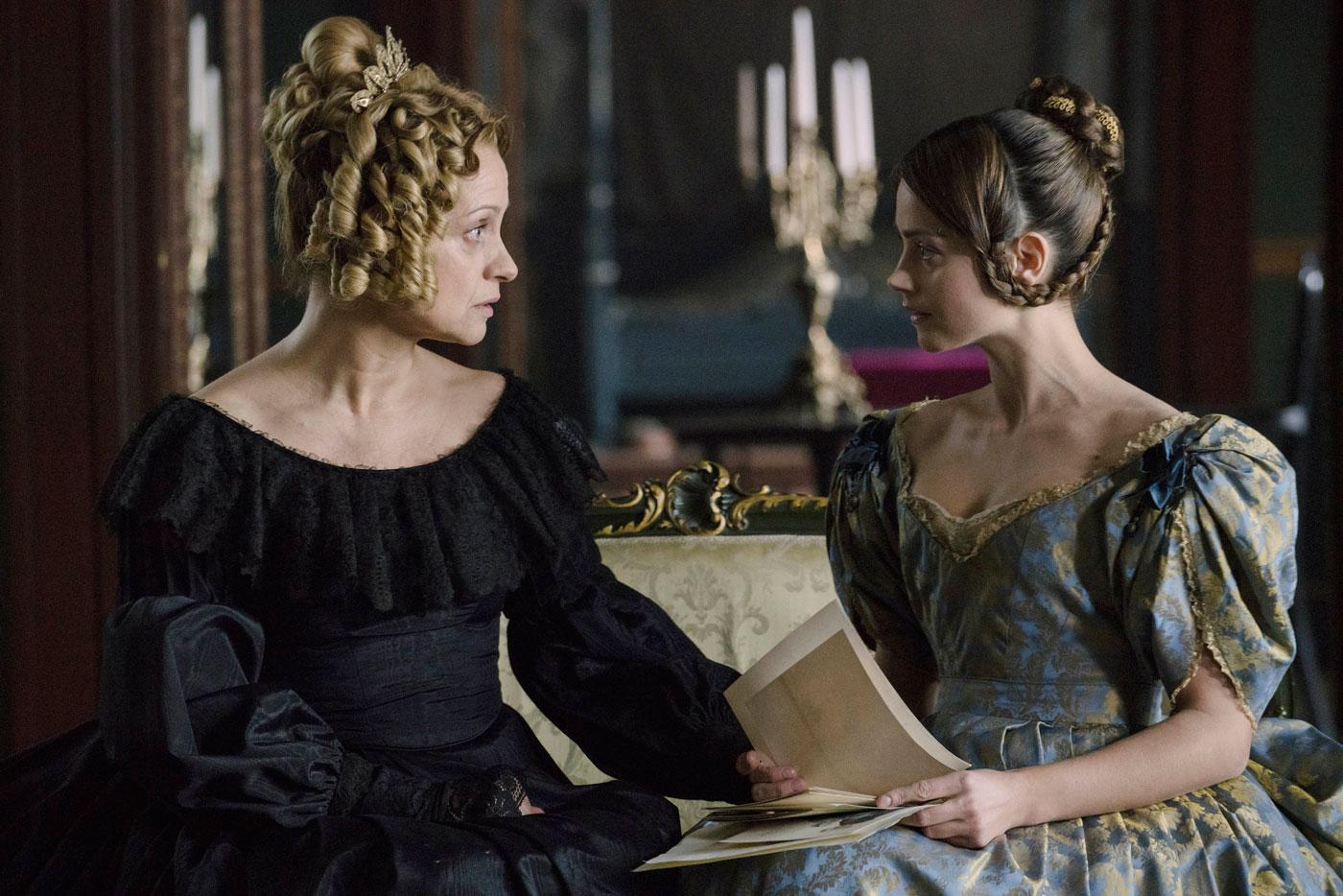 Victoria has a contentious relationship with her mother, who strictly controlled the queen's childhood. (ITV Plc) Meanwhile, her uncle Cumberland has joined with Sir John and the Duchess of Kent in a plan befitting his villainous look. The three spread rumors that Victoria has inherited her grandfather George III’s madness. Victoria’s instinctual behavior doesn’t help, especially because she’s living in a time where any “aberrant” behavior in women was considered hysteria, grounds for mental treatment. The rumors are fed even more when rats feed on Victoria’s birthday cake and she has a natural response: she screams a lot. 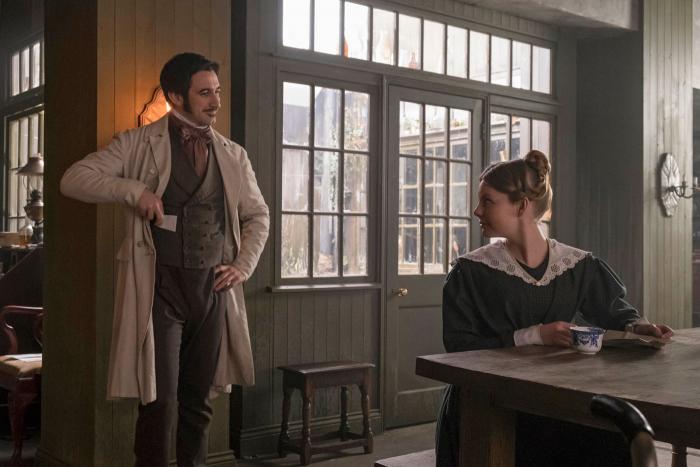 The chef Francatelli has taken an interest in Miss Skerrett, but she isn't returning it. (ITV Plc) In the wake of this incident, Wellington comes to advise Victoria on the ongoing PM standoff, and she gives a stirring speech about the expectations of her as a young woman versus those of him as a decorated male general. Lehzen decides that maybe it’s better to nix the gas lights in view of the rat problem, and Penge smirks in satisfaction. (Jenkins has already burnt her hand on the gas lights, leading Skerrett to meet the Queen’s chef Francatelli when she asks for some butter for the burn. He, of course, wants to get to know her better, but she’s not interested.)

After trying to distance himself from Victoria, who may be falling in love with him, Melbourne decides to step in as Prime Minister again after Wellington warns him of Cumberland’s scheme. (The real Melbourne was forty years older than Victoria, but here he is played by the dashing Rufus Sewell, so perhaps it's understandable. The real Victoria seemed to regard Melbourne more as a father figure, since her own father died early in her life.) He rescues Victoria as she pitifully tries to unveil a portrait of herself and the curtain snags. But when she learns he will come back to help her, the embarrassed tears vanish and her face lights up. She may be independent, but she can’t do it all alone.