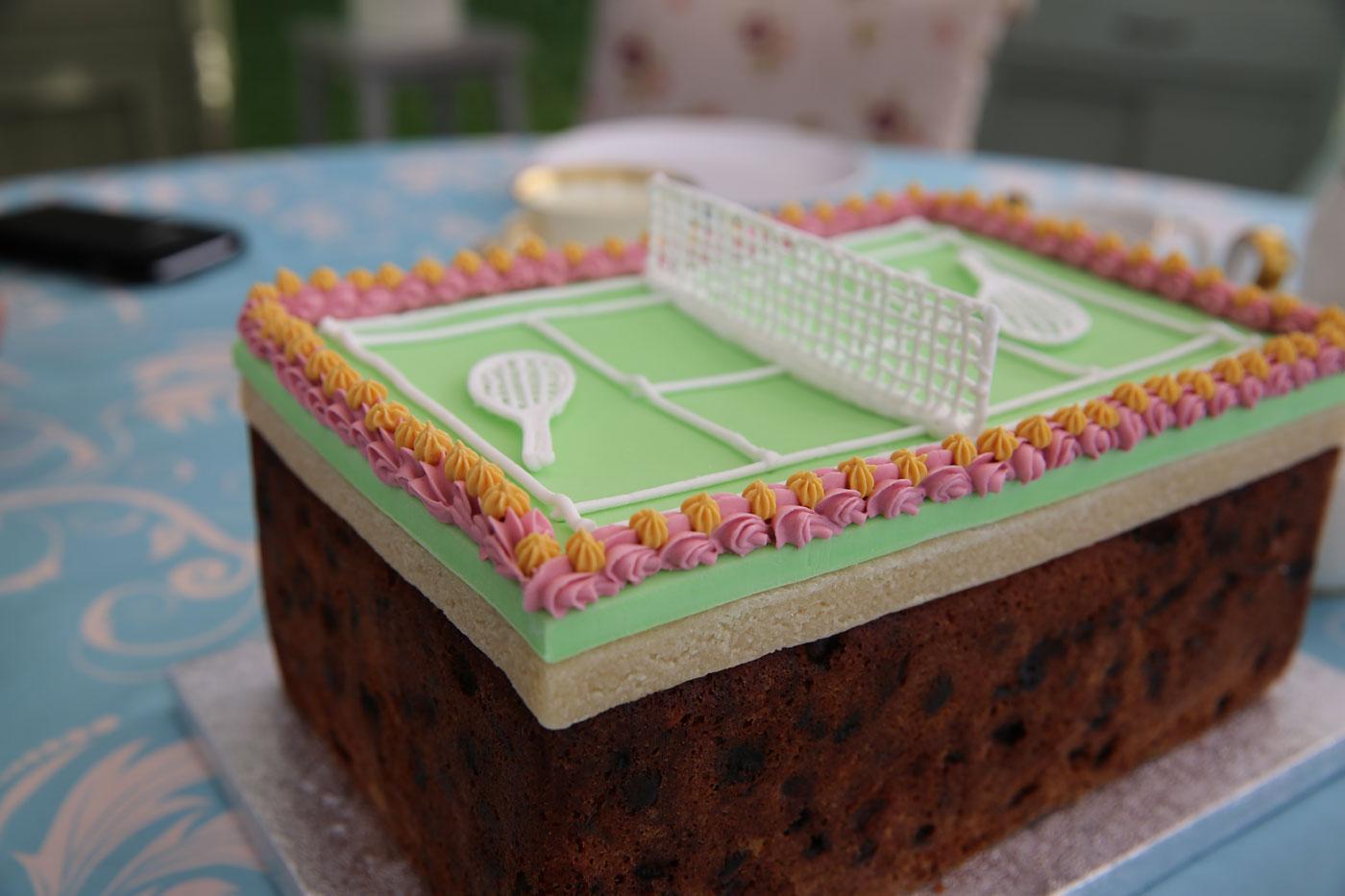 Near the end of the third season of The Great British Baking Show, the contestants were challenged to bake dishes from the 1800s in an episode devoted to the Victorian era, the period that gave birth to modern baking. As you immerse yourself in the political intrigue and romantic drama of the age with Victoria, why not try your hand at some of the recipes the queen would have eaten, especially when those recipes come from your favorite baker-judges Mary Berry and Paul Hollywood?

The technical challenge of The Great British Baking Show's Victorian episode was a fruit cake decorated to look like a tennis court, a recipe from the 1890s that Mary found in one of her antique cookbooks. The cake is topped by a layer of green fondant on top of a layer of marzipan and is garnished with royal icing tennis rackets and a net. This recipe is not for the faint of heart: when Mary and Paul demonstrated it on The Great British Baking Show: Masterclass, Mary called it "one of the most difficult challenges we've given our bakers." Of course, Mary and Paul's still turns out beautifully.

For the almond paste:

For the royal icing:

1. Preheat the oven to 325 degrees. Grease a 9x6in rectangular cake tin. Line the base and sides with a double layer of baking parchment

2. Put the cherries in a sieve and rinse under running water then drain well. Dry the pineapple and cherries very thoroughly using kitchen paper.

3. Place all the fruits and nuts in a bowl with the lemon zest and gently mix together.

4. In a separate bowl, cream the butter and sugar together until pale and fluffy. Beat in the eggs one at a time, with a spoonful of flour to prevent the mixture curdling. Fold in the remaining flour and ground almonds. Lightly fold in the fruit and nuts then pour the mixture into the prepared cake tin. Level the surface.

5. Bake for 2 hours, or until golden-brown and a skewer inserted into the centre of the cake comes out clean. Cover the cake loosely with aluminum foil after 1 hour to prevent the top becoming too dark.

6. Leave to cool in the tin for 15 minutes then turn out, peel off the parchment and finish cooling on a wire rack.

7. For the almond paste, mix the ground almonds, caster sugar and icing sugar in a bowl. Stir in the egg and almond essence. Knead in the bowl to form a stiff paste but don’t over-knead as this will make the paste oily. Wrap in cling film and set aside.

8. For the royal icing, whisk the egg whites in a large bowl until they become frothy. Mix in the sifted icing sugar a tablespoonful at a time. You can do this with a hand-held electric whisk but keep the speed low. Beat the icing until it is very stiff and white and stands up in peaks. Cover the surface of the icing with cling film.

9. For the fondant, place the gelatine, 2 tablespoons water, glucose and glycerine in a bowl set over a pan of gently simmering water and heat until the gelatine has dissolved (do not allow the water to boil or the gelatine to get too hot). Remove from the heat.

10. Sieve half of the icing sugar into a large bowl. Make a well in the centre, add the gelatine mixture and using a wooden spoon mix together. Sieve the remaining sugar onto the work surface and tip the mixture onto it. Knead together until the fondant is smooth and pliable. Reserve a thumb size piece of the white fondant and wrap in clingfilm. Little by little, add mint green food colouring to the remaining fondant and knead to a pale pistachio green colour. Wrap in clingfilm to prevent it drying out.

12. Roll out the green fondant on a surface lightly dusted with icing sugar, to a rectangle slightly larger than the cake. Neatly cut out a 9x6in rectangle and carefully place on top of the almond paste.

14. Spoon most of the white royal icing into a piping bag fitted with a number 3 writing nozzle. Pipe the outline of a tennis court on top of the green fondant, leaving a ¾in gap around the edge.

15. On a sheet of greaseproof paper or a silicon mat, pipe the outline of 2 small tennis rackets (approx. 2½in long) and a tennis net about 4½x1¼in (it should be the same width as the court you piped onto the cake). Spoon the remaining white icing into a piping bag fitted with a number 2 plain nozzle and pipe the strings of the tennis racket within the tennis racket outline and the strings of the net within the outline of the net. Leave to dry until you can peel them off the paper.

17. When the cake has cooled, gently lift the decorative iced layer of almond paste and fondant onto the cake.

18. Pipe a line of white icing across the middle of the tennis court. Peel the net off the greaseproof paper and stick it on the line of icing, so it stands up on top of the cake. Lay the iced tennis rackets on either end of the court and finally roll a small tennis ball from the reserved fondant.

Some supermarkets sell pasteurised eggs, which are best used in the icing and almond paste, where the eggs aren't cooked.