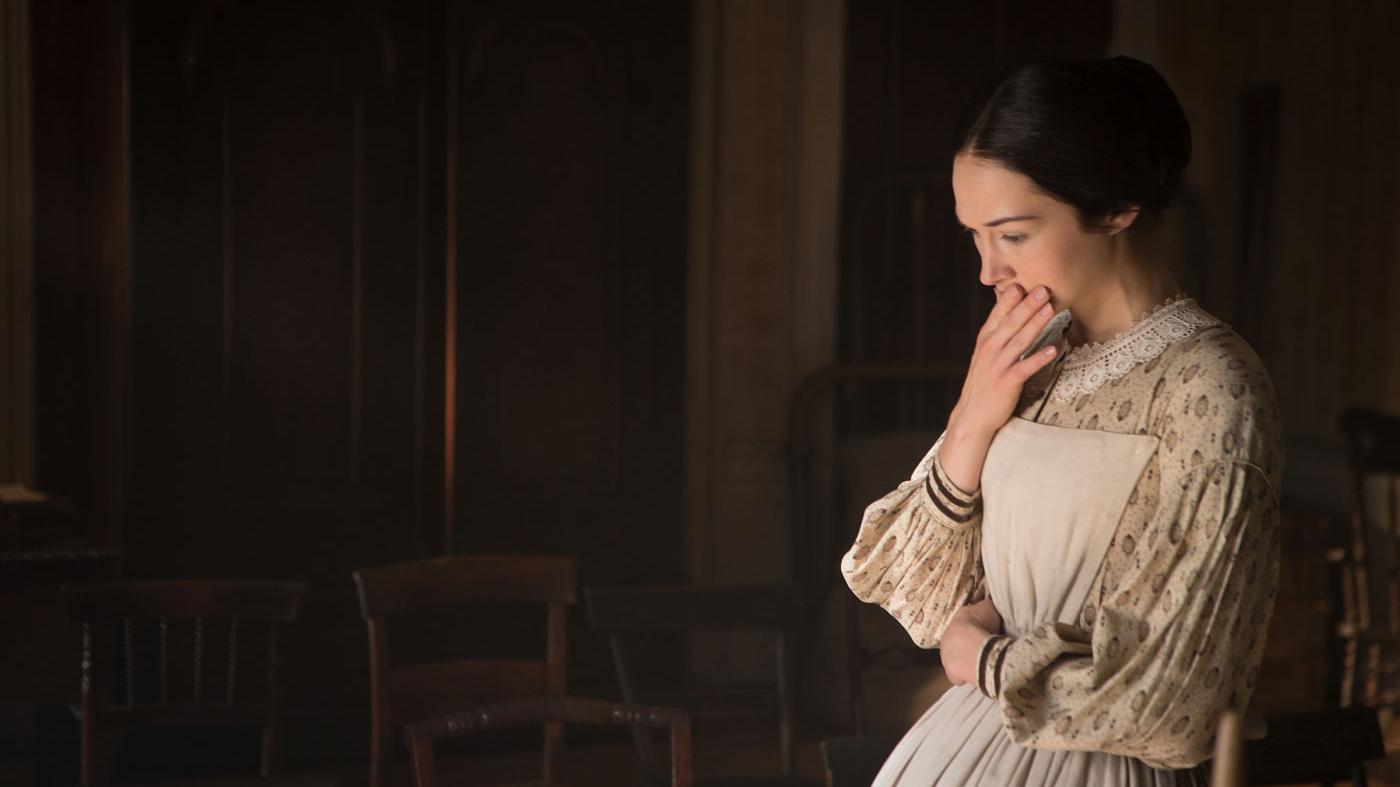 As the Green family struggles with a dark secret, Emma begins to question her loyalties. Photo: PBS/Erik Heinila

If there is a character on Mercy Street who could find strength in Alfred, Lord Tennyson’s poem “Ulysses,” it’s James Green. He certainly has been “Made weak by time and fate,” what with the forced conversion of his hotel into a hospital; his imprisonment; the Union occupation of his city and even his house; and now, the murder of a Union soldier staining the hands of his family. The steadfast refusal of Tennyson’s Ulysses to succumb to age and destiny, his vow “To strive, to seek, to find, and not to yield,” might embolden James. 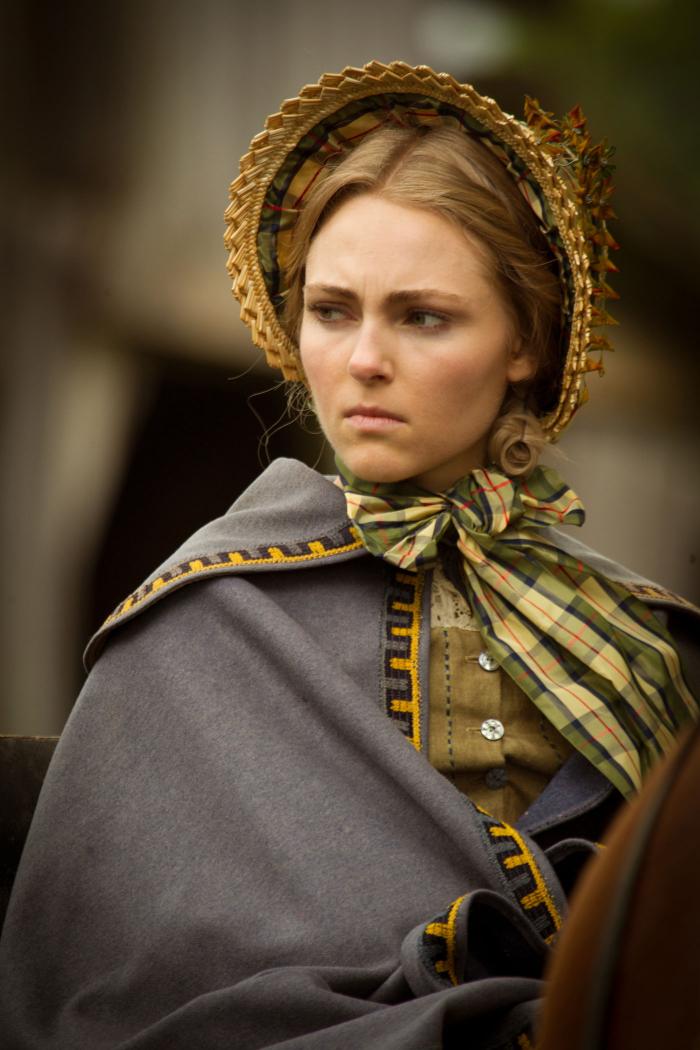 Alice is helping Frank escape Alexandria. (PBS/Erik Heinila) But those lines of the poem are invoked by Mary and Jed. Instead, we open this episode with an exhausted James quietly crying as his son Jimmy buries the soldier’s corpse in the family’s furniture warehouse. To add to the burden, Pinkerton is suspicious of the Greens. He stops James and Jimmy as they leave the warehouse to ask them about Frank. He saw Frank with the Green daughters, so he figures James might know something about the fugitive. James demurs.

Luckily for Frank, Alice is helping him flee Alexandria. Having stolen travel papers and learned the blockade password, she now takes one more thing from the dead soldier to aid the escape: his uniform. Dressed in the blue jacket and hat, Frank takes a carriage with Alice past the Union checkpoint. Before they are entirely free of danger, the two run into a battle and are forced to shelter at the home of a young Quaker couple.

A different type of battle is raging at Mansion House. McBurney is determined to send the typhoid-stricken Mary away to prevent an outbreak of typhoid at the hospital. However, he knows Jed would never allow it, and both men are determined, like Ulysses, “not to yield.” So he orders Jed and Nurse Hastings to attend to an ailing general in the field, with an extra directive to Hastings to delay their return until nightfall. While Jed is away, Mary will be removed.

Another relocation of a patient has upset the quarantine tent outside the hospital. A white man has contracted smallpox and is forced to stay in the tent, hitherto only filled with Contrabands. The man is a full-blooded racist and raves against being confined with black people, but Charlotte quickly shuts him up by laying down the law of the disease. 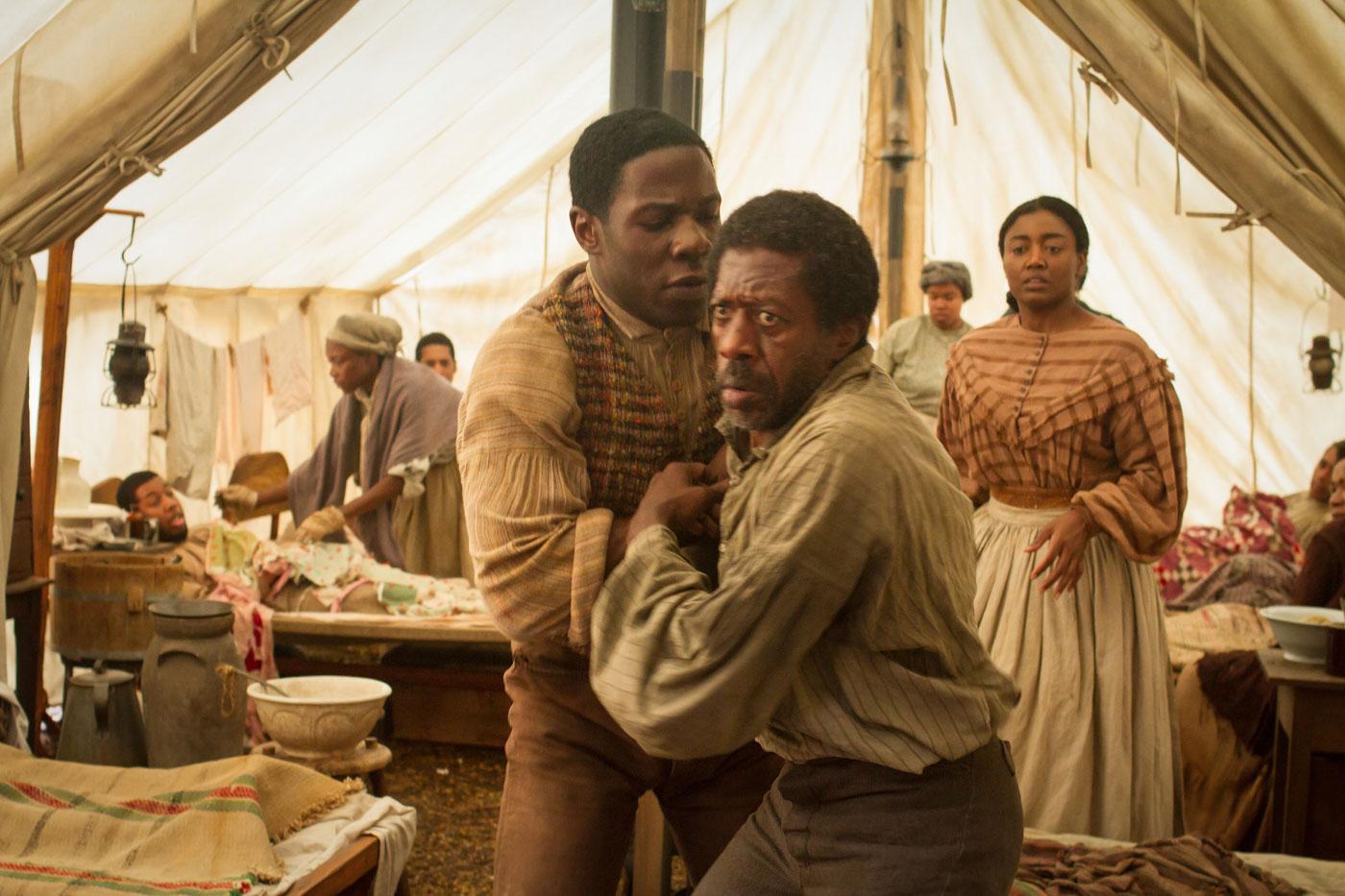 Samuel reveals the depth of his medical knowledge after a white man instigates a fight in the quarantine tent. (PBS/Erik Heinila) He soon causes more trouble however. When a girl brings biscuits to her quarantined grandfather, the white man tries to take some too. In the ensuing altercation, his thigh is pierced by a stake. Samuel—who nobly gave up his chance to go north to Aurelia so that Caleb could be reunited with her instead—pulls the stake out and cauterizes the wound to stop the blood loss. Dr. Hale arrives and is astounded by Samuel’s medical knowledge. Struggling to study for his impending medical examination, he enlists Samuel as a tutor.

With Jed and Nurse Hastings away from the hospital in a cramped, bumpy carriage, Mary’s fever worsens. She has a hallucination of her father reading “Ulysses” to her, something he would do when she was ill as a child. Confused and desperate, she wanders out of her room trying to find her father. The hospital workers struggle to return her to bed, until Lisette Beaufort appears. Madame Beaufort is an anatomical artist who has just arrived to sketch the wounded soldiers at the hospital. But she is also kind and charming, able to both endear herself to McBurney and soothe Mary into returning to her sickbed. Mary and Lisette later bond over a commonality: they have both fallen in love with doctors at some point in their lives. 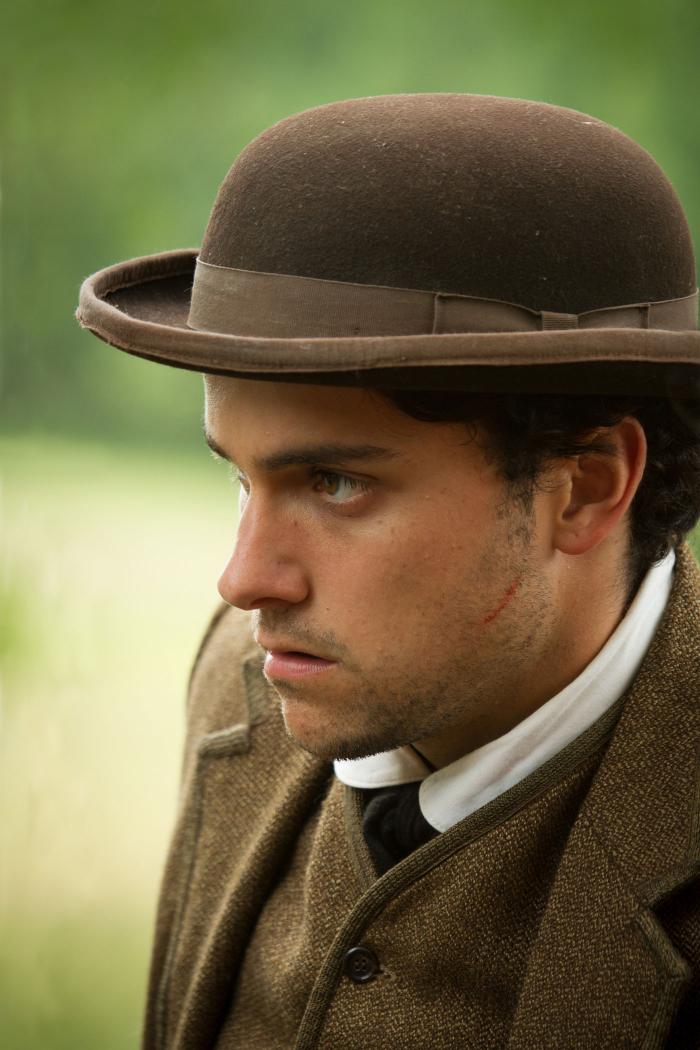 Frank almost commits a horrible crime. (PBS/Erik Heinila) Whereas Mary easily accepts a compassionate stranger into her life, Frank is more skeptical. He finds a wanted poster with his face on it in the Quaker home underneath a portrait of Lincoln, the man he almost assassinated. Even though the Quakers clearly know Frank is a wanted man, the husband speaks only of forgiveness. But Frank is nervous and determines to leave right away. For extra protection, he steals a pistol from the peaceful home, and contemplates shooting the entire family to prevent them from reporting him. As horror at such senseless killing overwhelms Alice, Frank is moved to return the gun and leave the gracious family alone. When he departs with Alice a bit later to reach the safety of a Confederate encampment, he gives her a portrait of her late beau Tom, and expresses weariness with the war. He’s a changed man, tired of the killing and beginning to question the Confederate cause.

Back at the hospital, Emma is also struggling with her Confederate loyalties. When a Southern soldier requests a sympathetic priest shortly before dying, she asks her mother to find one. Jane soon accompanies a Confederate priest to the soldier’s deathbed. During the eulogy, the priest defends slavery and chastises the bedridden Union soldiers around him. As Emma becomes more and more disgusted by the priest’s blatant, hateful accusations, she and her mother join the soldiers in shouting at each other. The escalating conflict is only stopped when the Chaplain steps in. Some stolen glances at that man of the hour reveal Emma’s budding affection for this Union clergyman.

Nurse Hastings also reveals a sensitive side. After Jed inserts a catheter into a misogynistic, gonorrheal general out in the field, Hastings continually stalls to prevent Jed from returning to Mansion House before Mary has been taken away. But she is eventually overcome by Jed’s love for Mary, and tells him about McBurney’s plan. She also gives him a book of poetry by Tennyson that includes “Ulysses,” over which he has been obsessing since he heard Mary mutter lines from it while in a fever. 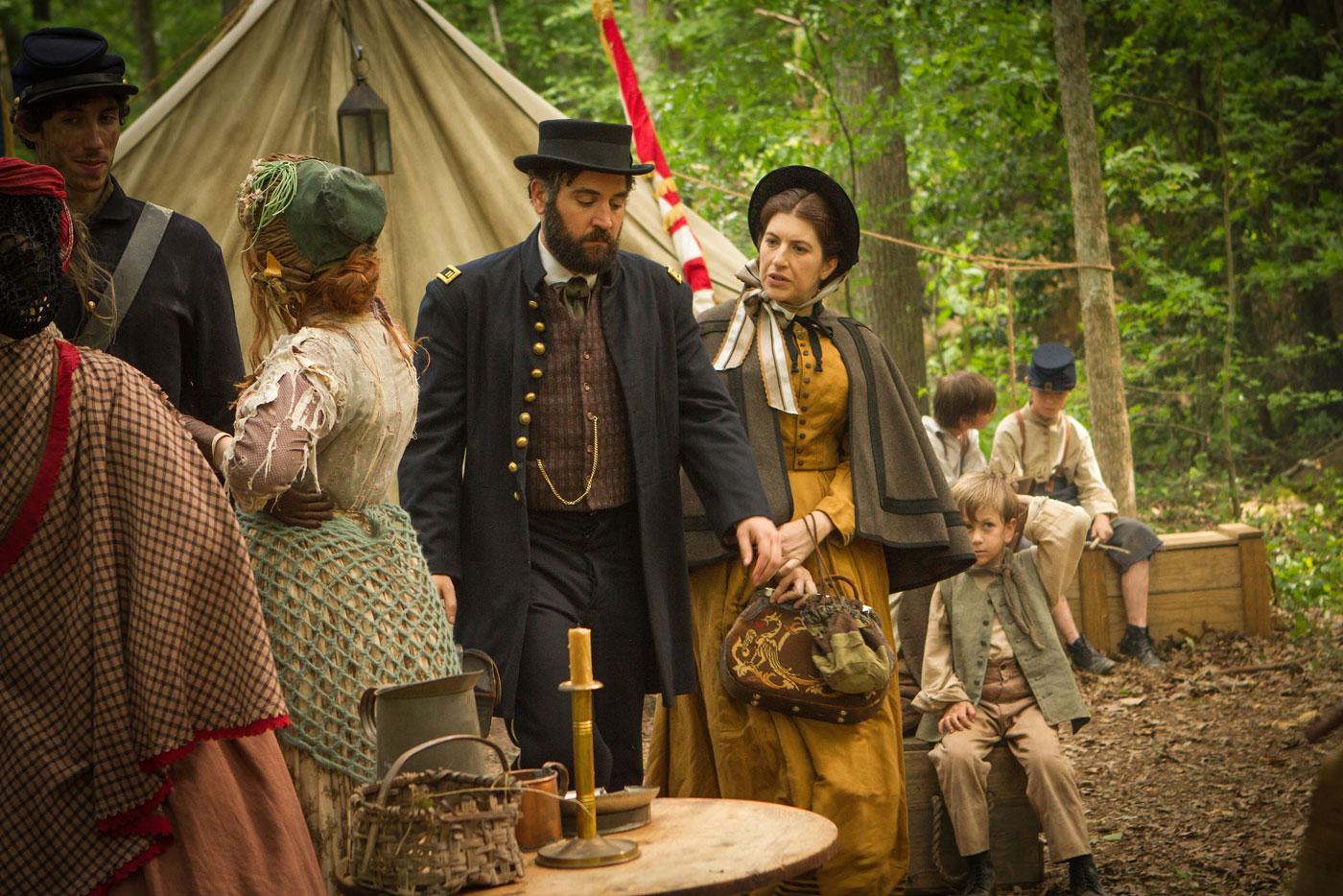 Jed and Nurse Hastings are sent on a field call by McBurney so that he can send Mary away without Jed knowing. (PBS/Erik Heinila) Despite Hastings’ warning, Jed arrives at Mansion House too late. Mary is already at the dock, waiting to embark on a ship. Jed reaches her just before she is taken away, and recites the final lines of “Ulysses” to give her fortitude. He promises his devotion to her as she leaves with the ship.

Worse off even than Mary, however, are the Greens. Pinkerton is even more suspicious of them, now that the Union soldier lodging in their house (the one they killed) has disappeared. The detective searches their house for signs of the man, but instead finds a photo of Frank hidden in Emma’s dresser. This does not bode well.
Mercy Street
Recap