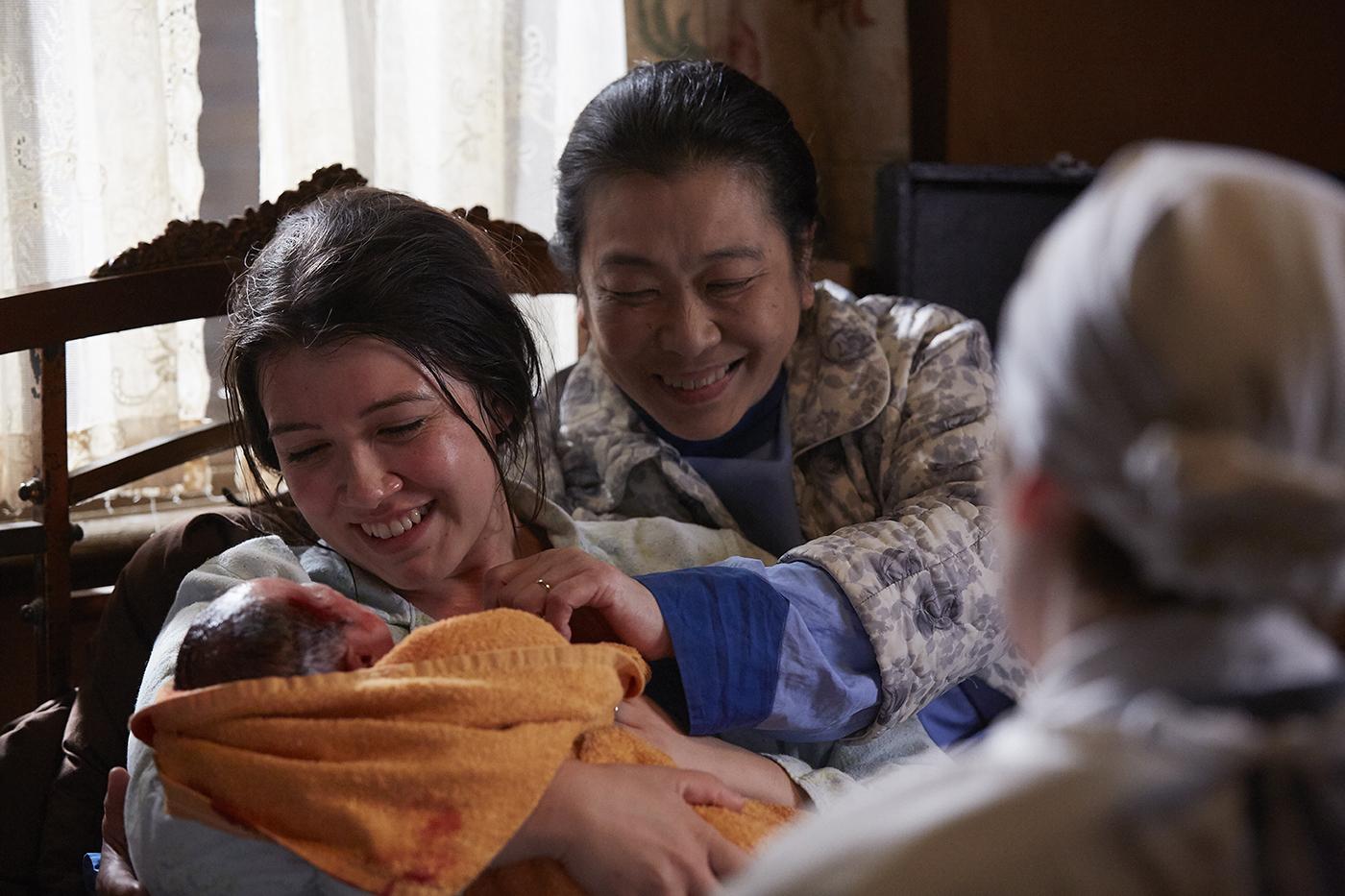 No one stays a villain for long in Call the Midwife. Under the show’s generous vision, even someone like Sister Ursula, who restricts the midwives’ humanitarian impulses, is eventually seen in a more sympathetic light – she has a noble reason for acting the way she does, as does Mrs. Chen, the difficult and uncompromising mother-in-law of the pregnant Lucy.

Lucy lives with her husband and Mrs. Chen in a stuffy apartment above the laundry where they work. While Lucy is half-Chinese, she was raised in Liverpool by her English mother after her father was deported. A large cultural gap thus exists between her and her Chinese mother-in-law, who complains about Lucy’s cooking and insists that she follow a Chinese custom wherein a mother is confined with her baby and female relatives in the home for 30 days after giving birth.

Lucy regretfully accepts that tradition, as she keenly wants to get along with Mrs. Chen. But once she gives birth at home, more conflicts ensue, starting with the infant’s name. Lucy wants to name the girl after her deceased mother but Mrs. Chen refuses on the grounds that it’s bad luck. They compromise and name her Lin – short for Linda but also a Chinese name. 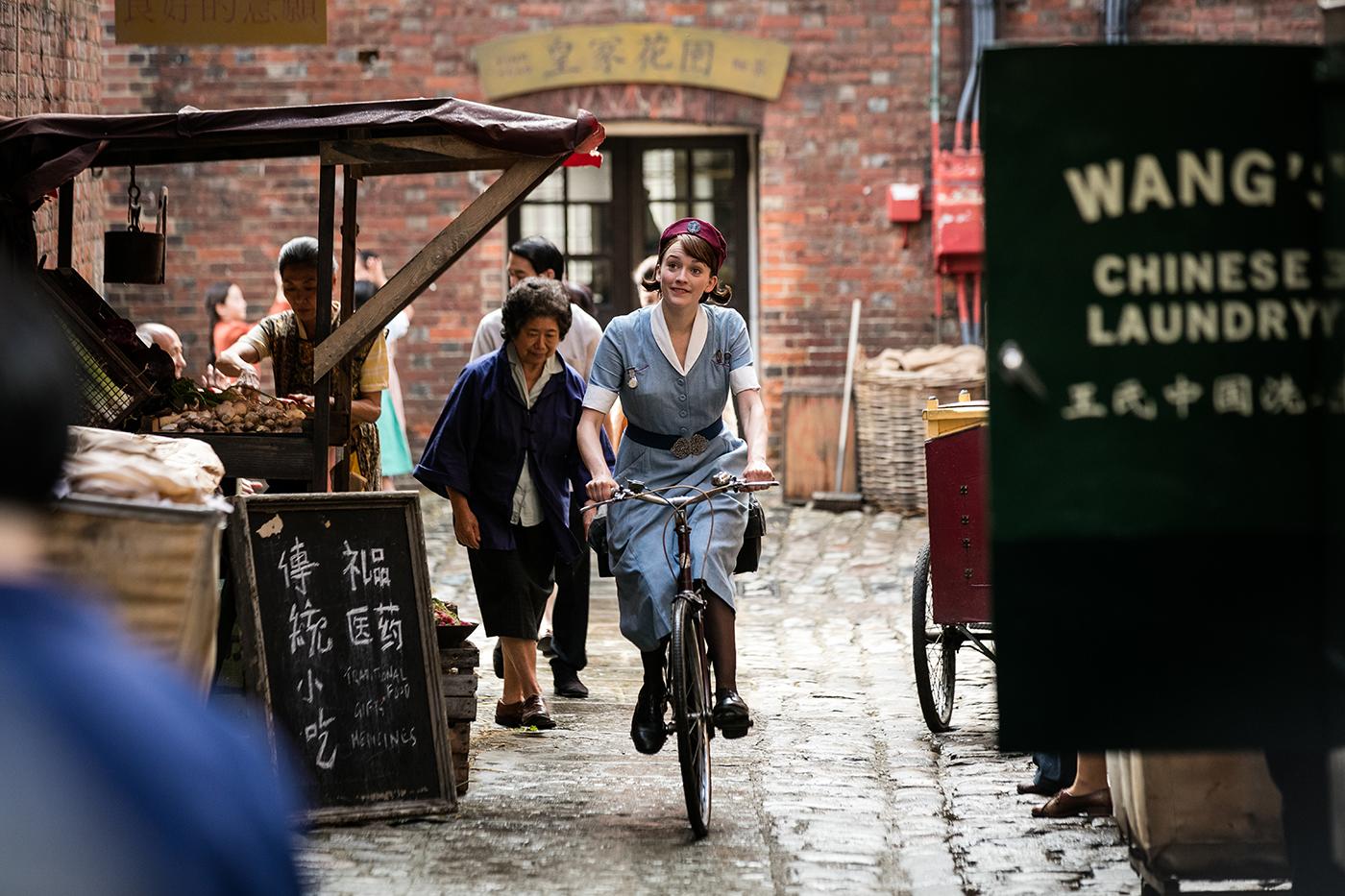 Barbara is in charge of Lucy and her newborn's health. Photo: Neal Street Productions 2016 When Barbara comes to check up on Lin and Lucy, the new mother is a bit worse for wear. Mrs. Chen keeps feeding her fish soup, insists on a hot fire at all times, and refuses to open a window for fear of a draft. A headache and lack of sleep compound matters. Since Sister Ursula has insisted that check-ups take no longer than twenty minutes and Barbara has already been chastised for spending too much time with the Chens, the nurse leaves before thoroughly examining baby Lin – she’s asleep and Lucy is loath to wake her.

Sister Ursula’s newest restriction is a result of her quest for efficiency. She previously served at a maternity home that was shut down for being judged wasteful, and blames herself for the closure. She is determined to rectify her mistakes at Nonnatus House.

It certainly doesn’t help that the Board of Health has decided that maternity homes should be absorbed into large general hospitals. Therefore, the pressure is on Dr. Turner and the midwives to demonstrate the importance of the Poplar home during an inspection.

With the loss of Patsy and Sister Mary Cynthia, the Nonnatans are short-staffed, putting dangerous stress on the pregnant Shelagh. Before the inspection, Dr. Turner requests extra help for his wife, leading Sister Ursula to begin making rounds, which frees up Barbara to help Shelagh at the maternity home. 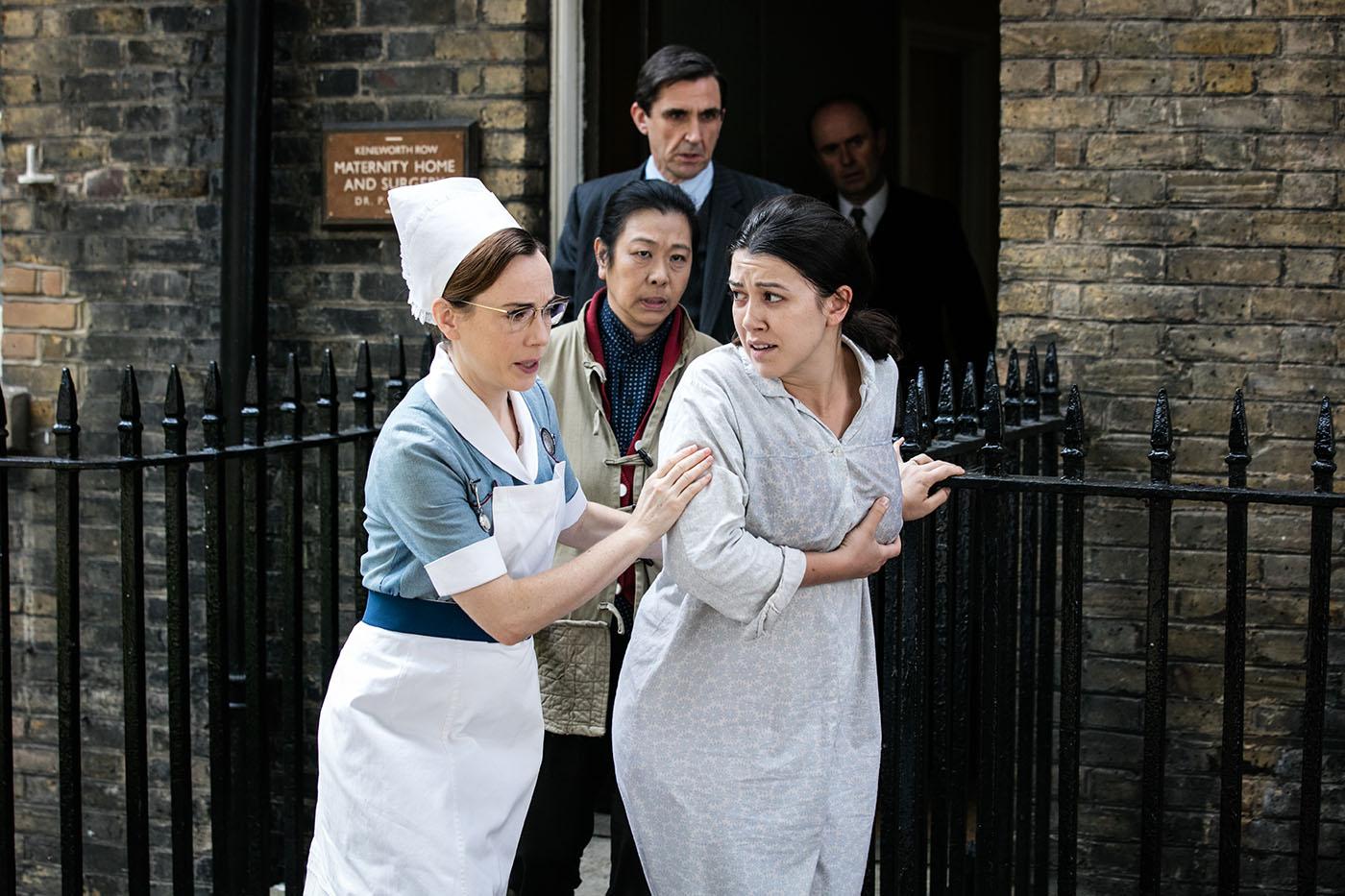 An emergency rushes the Chens to the maternity clinic while it's undergoing an inspection. Photo: Neal Street Productions 2016 While the Board of Health inspector is touring the maternity home, Mrs. Chen rushes in with an unmoving but still breathing baby Lin. She’s soon followed by a barefoot and distraught Lucy, who proceeds to vomit. Based on Lucy’s headache and queasiness and the state of the apartment, Barbara and Dr. Turner put together the pieces: Lucy and Lin have carbon monoxide poisoning from the gas heater and their sealed room.

With that crisis defused, another strikes. Shelagh is bleeding and may be having a miscarriage. Dr. Turner leaves the inspection to Nurse Crane against Shelagh’s wishes in order to drive her to the hospital, where the prognosis is uncertain, although it seems that the pregnancy is saved for now.

The inspection concludes under Nurse Crane’s guidance, and although the maternity home has impressed the Board of Health official, the best he can do is simply recommend that it not be immediately closed, for “progress marches on.” (The specialization of medicine during the twentieth century pushed midwives out of the mainstream.) Nurse Crane then relates the tale of baby Lin’s emergency to Sister Ursula and urges her to reconsider the time limit on check-ups. Distraught by Lin’s condition – she is still unconscious – Ursula visits Barbara in her room to apologize and finds that Trixie has returned, providing necessary relief for the thinly stretched staff. 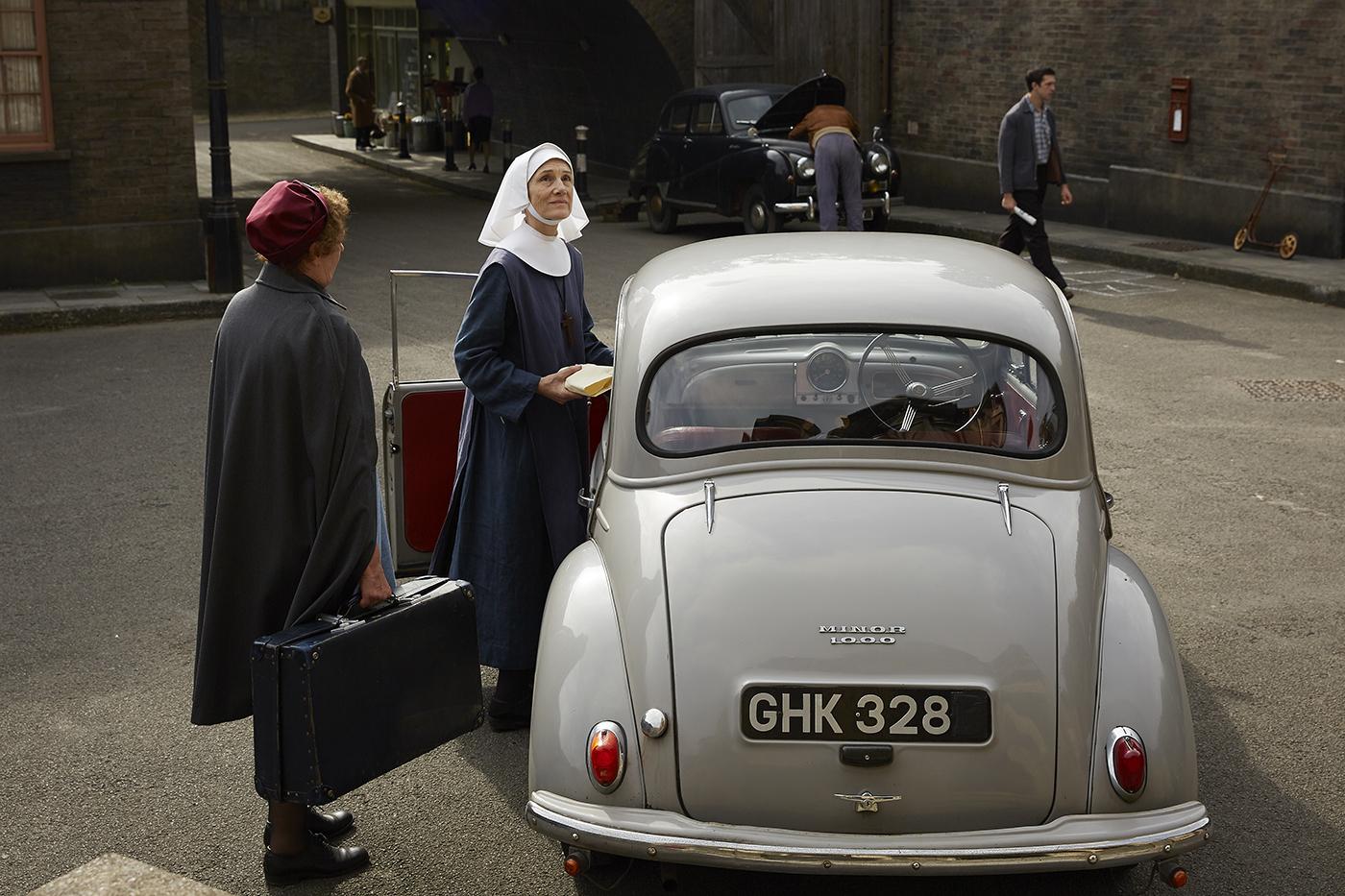 The near-tragedy of baby Lin has led Sister Ursula to rethink some decisions. Photo: Neal Street Productions 2016 The other antagonist of this episode also receives expiation as she unburdens herself of a secret. Mrs. Chen kept the heat up and the window closed in the apartment because her own infant daughter died from prolonged exposure to cold and rain while Mrs. Chen fled the Japanese in her home country immediately after giving birth.

Both Mrs. Chen and Sister Ursula blame themselves for Lin’s health. The former is forgiven by Lucy after she shares her story, and the latter receives comfort from Sister Julienne, who prays with her over the course of an anguished night. Finally, Lin wakes up.

In the wake of this near-tragedy, Sister Ursula is reconciled to the midwives and decides to return to the mother house. Julienne discovers that Monica Joan is not delirious, as everyone thought, but has instead been sneaking off to watch TV. But despite these happy results, we are left on an ominous note. Trixie stopped at the mother house on her way back to Nonnatus, and didn’t see Mary Cynthia there. Where is she? 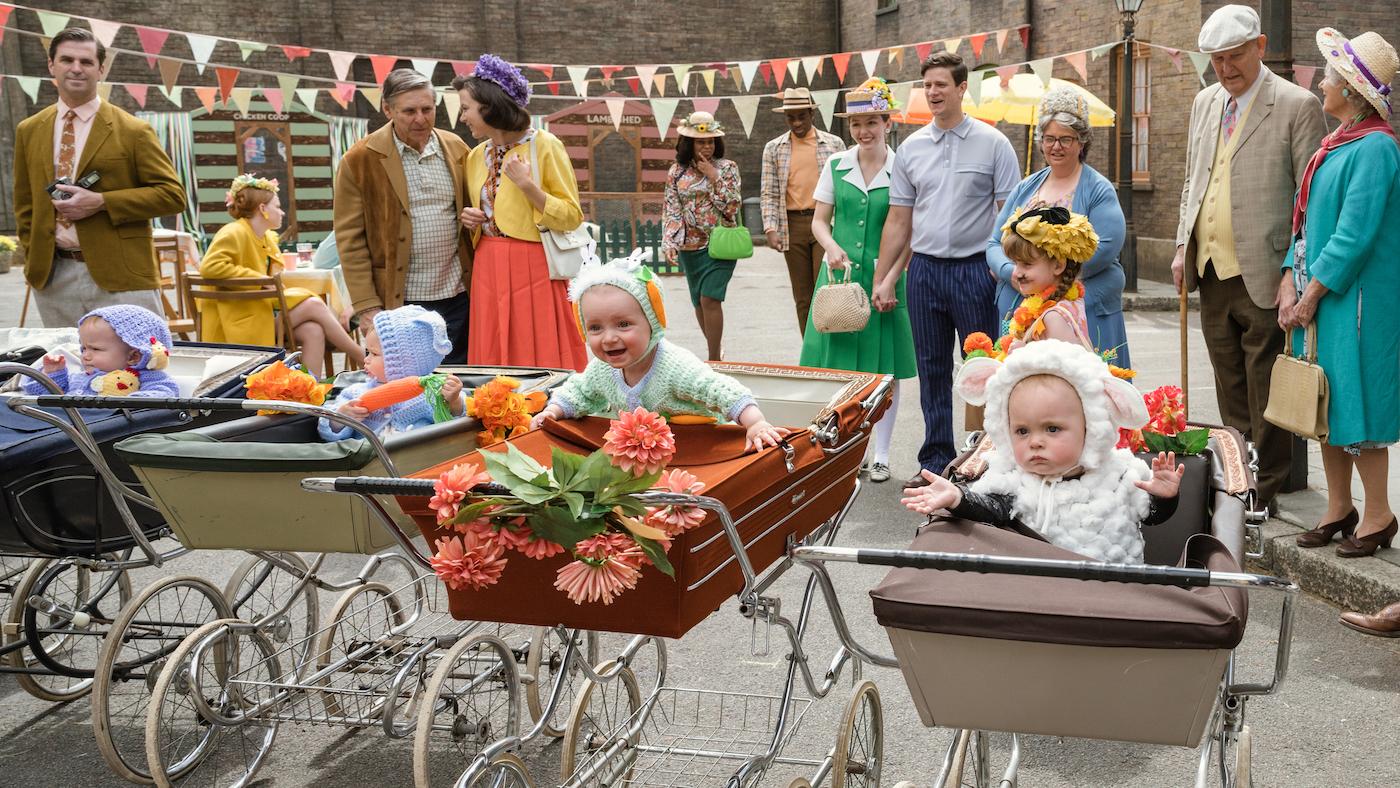 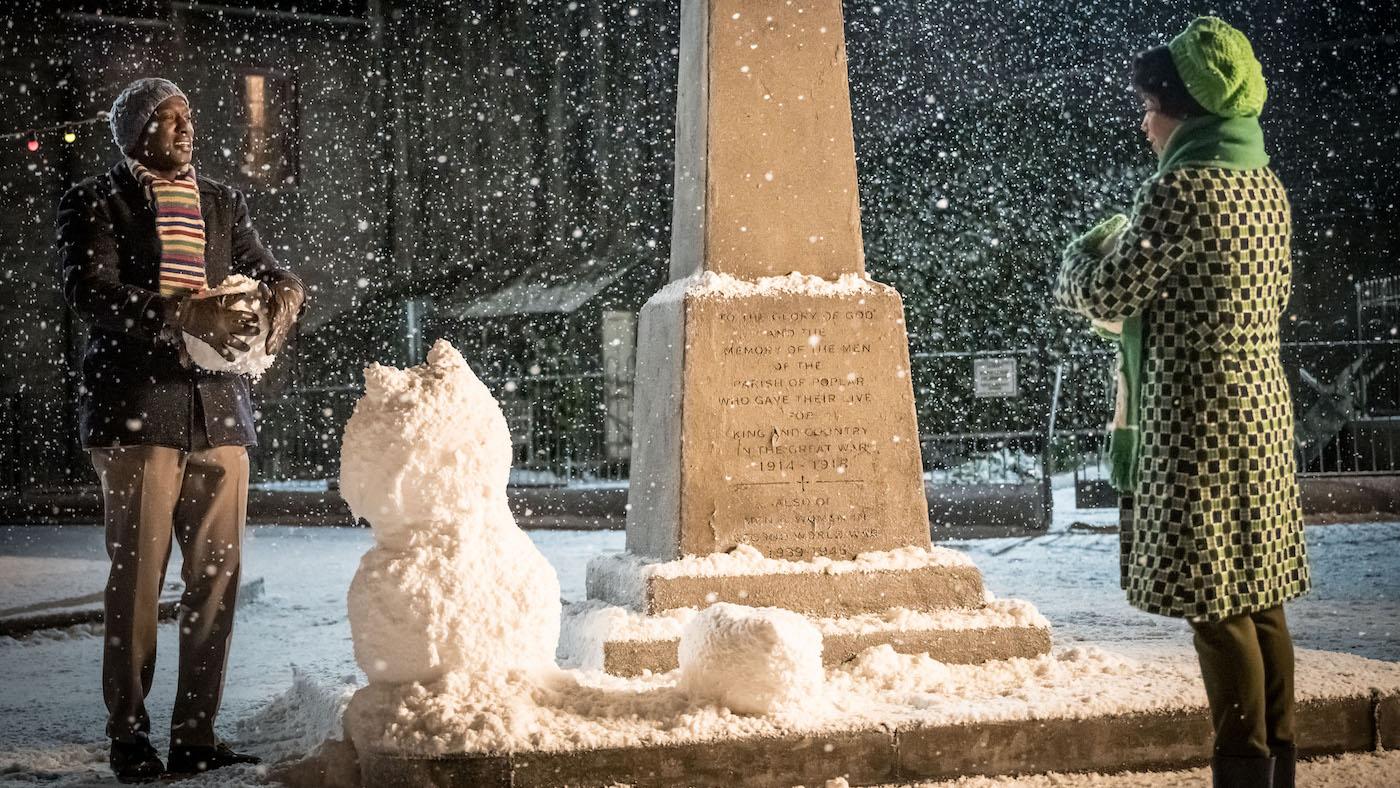