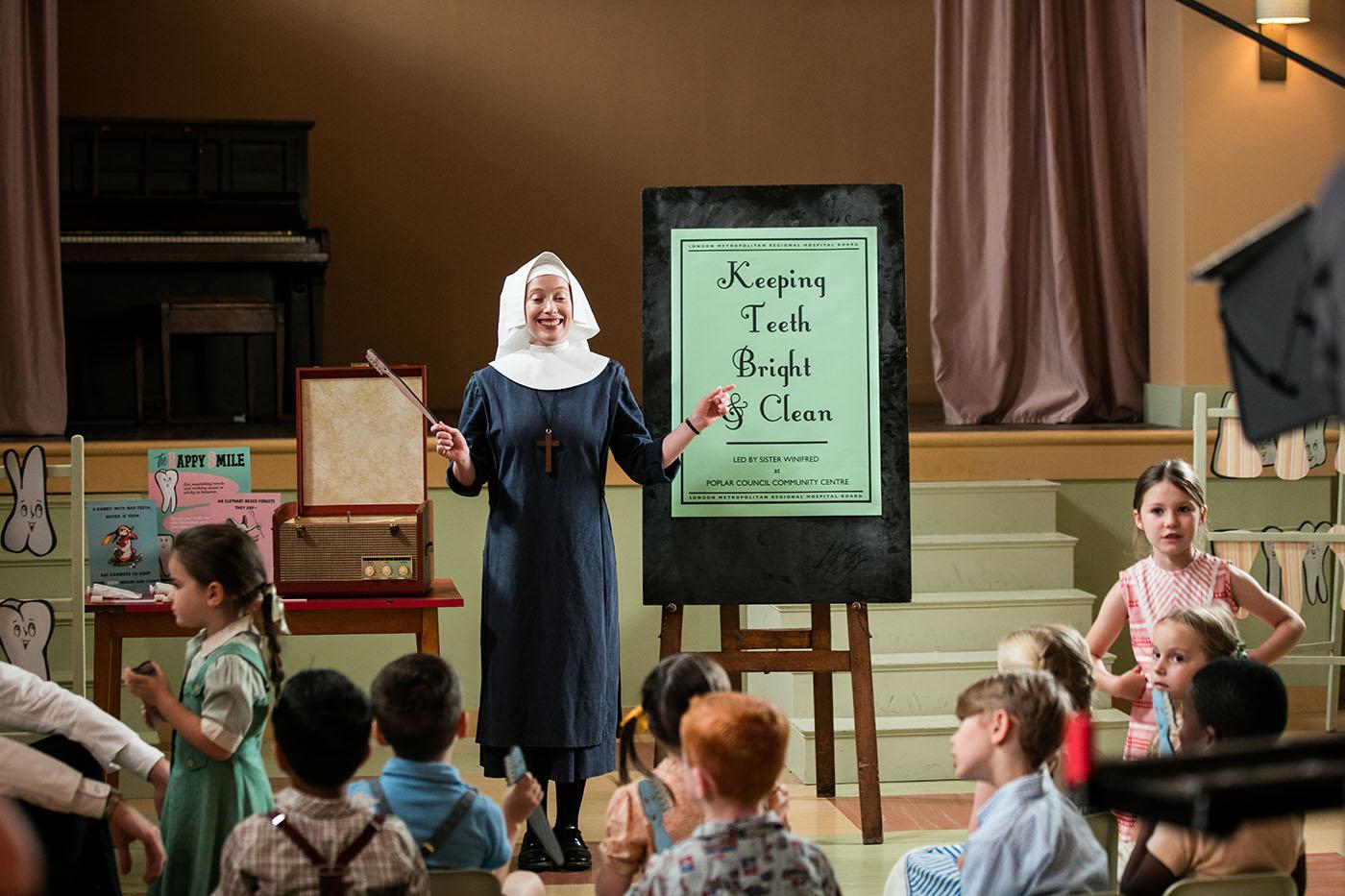 Leave it to Call the Midwife to juxtapose a relatively banal problem with a vital and difficult issue. Not that dental hygiene isn’t important, but housing and providing for people with special needs or mental illness seems a more intractable challenge.

Ivy is a seamstress in her 60s who is a favorite of Trixie’s for cocktail dresses. She is also a close friend of Fred and a regular presence at Tom’s church. Every Sunday, she leaves her 21-year-old son Reggie at home alone to attend mass, pointing out to him where the hands of the clock will be when she returns. Reggie has Down syndrome.

One day, Ivy collapses in church, dead. When Fred and Tom break the news to Reggie, it is unclear whether he grasps the import. Whether he does or not, he cannot live by himself. Fred and Violet take him in and ask Shelagh to look into suitable living situations for the young man. 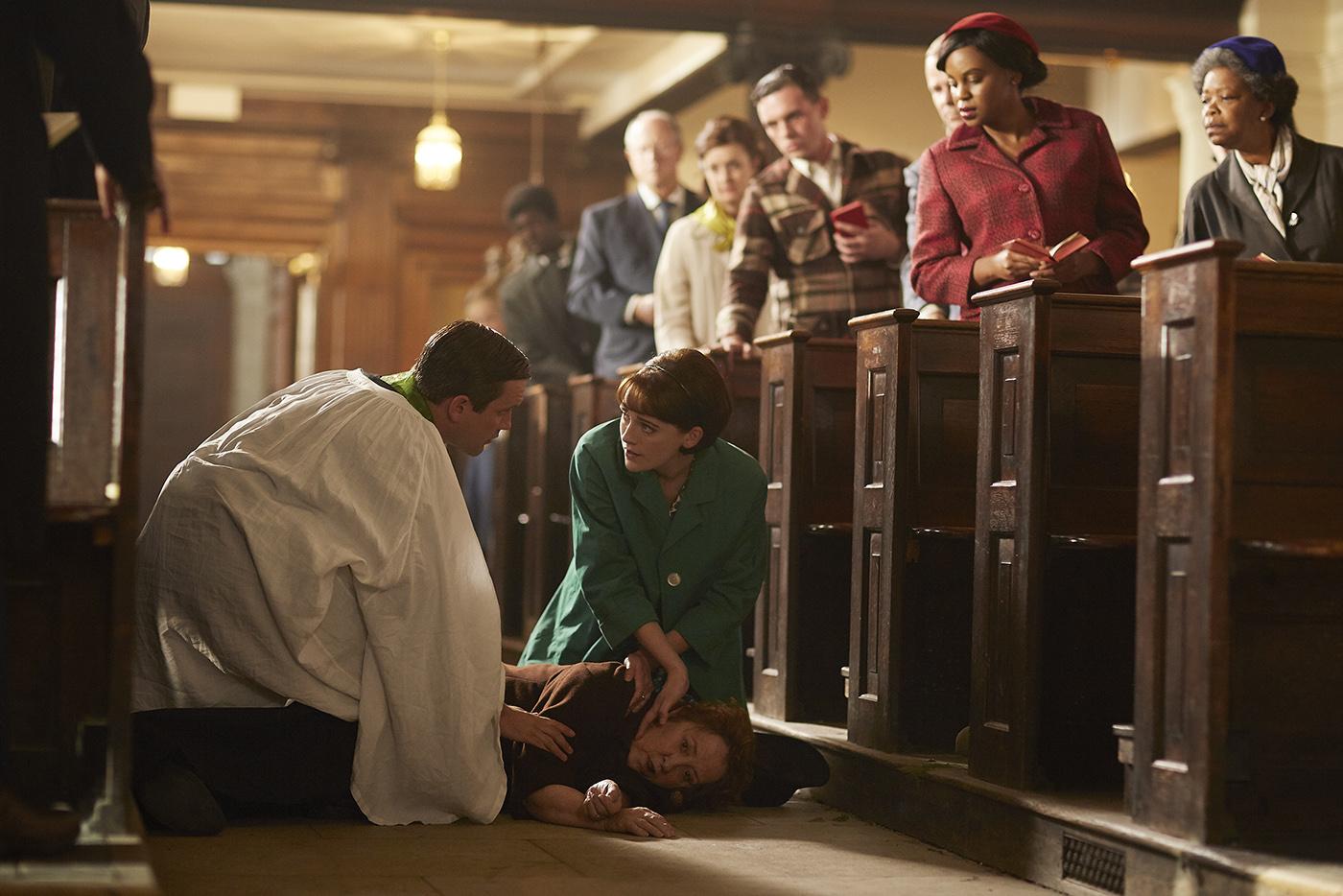 Ivy collapses, dead, in church one day, leaving her son Reggie without a family. Photo: Neal Street Productions 2016 Violet is reluctant to house Reggie for long, especially since he must be left alone while she and Fred work and run errands. Her fears prove to be well-founded when Reggie puts toast under the broiler then goes off to collect a package delivery at the front door, locking himself out in the process. Luckily, Fred stops off to check in on Reggie. Finding a house full of smoke, he throws open windows and turns off the broiler. Setting off to find Reggie – who has endured hostile stares and cruel taunting as he wanders the streets – Fred discovers him at his mother’s flat, calling for her.

It’s clearly unwise to leave Reggie unsupervised in an unfamiliar home, so the next day Fred brings him to work in the garden at Nonnatus House. Reggie befriends Sister Monica Joan and discovers a latent green thumb. As a memento of his mother, he brought one of her potted plants with him to Fred and Violet’s house, and he takes some bulbs from Nonnatus House to plant on Ivy’s grave. 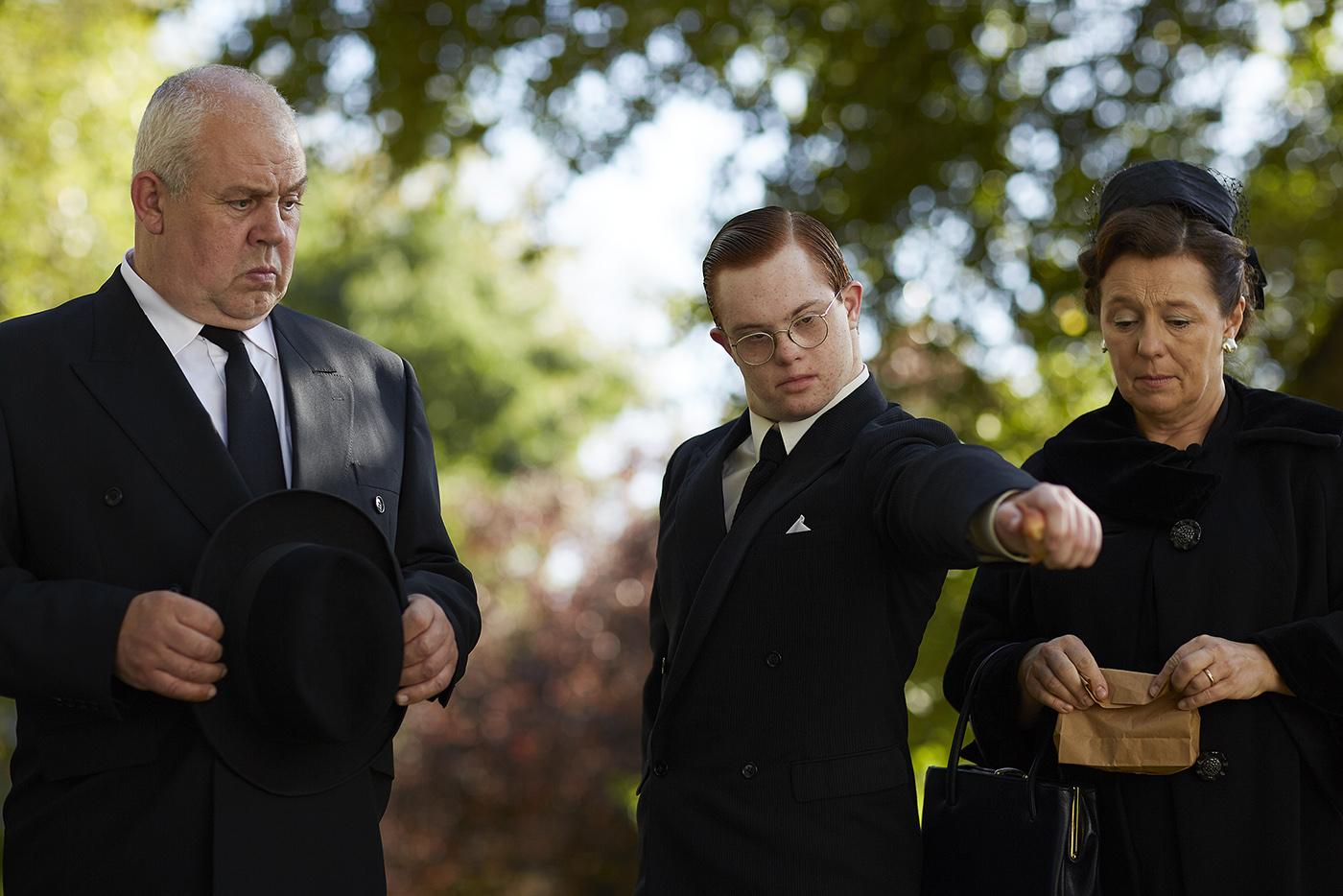 Fred and Violet take in Reggie after his mother suddenly dies. Photo: Neal Street Productions 2016 While Violet hems a mourning suit for Reggie, he begins to cry softly. Her sympathy kicking in, Violet starts to warm towards the young man and offers comfort. But Reggie’s tears are not from grief. Instead, he feels as if he has betrayed his mother because he is content living with Fred and Violet and cultivating the garden, even though Ivy is gone.

Still searching for a more suitable home for Reggie, Fred learns that he is too old for many institutions. His only option may be a mental hospital called Linchmere, so Fred grudgingly visits to tour the facility. Sister Monica Joan, having taken a liking to Reggie, joins Fred. Predominantly gray, lacking green space, filled with locked doors and narrow cots, Linchmere seems a miserable place. Compounding the consternation Fred and Monica Joan feel at seeing such a sorrowful institution is a glimpse of Sister Mary Cynthia.

The troubled young sister has struggled to rise out of her depression, and the psychiatrists at Linchmere have decided to try electroconvulsive therapy, against Mary Cynthia’s own wishes. Not that Fred and Sister Monica Joan know this. Still, Monica Joan is devastated, and the two report their finding to Sister Julienne. 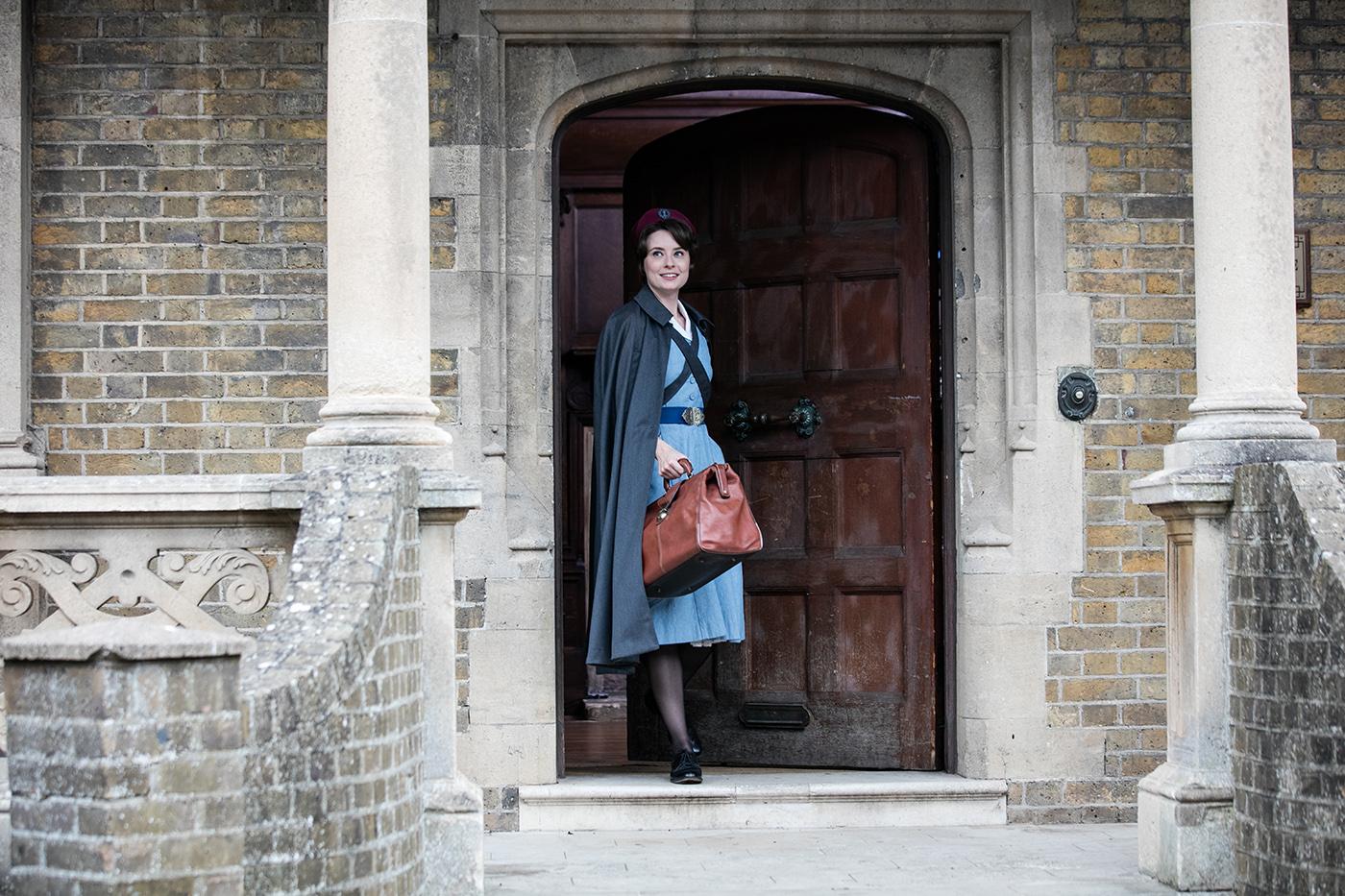 Valerie Dyer is the newest midwife at Nonnatus House. Photo: Neal Street Productions 2016 When Julienne attempts to have Sister Mary Cynthia released to Nonnatus House, she is refused even a visit with the sister. Concerning as this is, the rest of the midwives have reason to rejoice. Sister Julienne has not informed them of Mary Cynthia’s plight, and the addition of Valerie Dyer to the team has provided both relief and a new friend. Valerie has a profound connection to the House: Sister Monica Joan delivered her, and still remembers the birth vividly.

Sister Winifred is also in high spirits, as Dr. Turner has requested her help in educating Poplar about the importance of dental hygiene, a responsibility she giddily accepts. (The new duty also inspires her to learn to drive, from a somewhat skeptical Nurse Crane.) She enlists a handsome dentist in her toothbrushing crusade to lead demonstrations at the community center. When one of Trixie’s patients, due in the next few days, complains of horrible toothaches but refuses to go to the dentist out of fear, Trixie pulls in the dentist to examine her mouth.

All of Crystal’s teeth are rotten. The dentist kindly suggests that she come to his office with him, so that he can pull them and ease her inflamed gums. He also asks Trixie to accompany Crystal, in order to comfort her through her ordeal. His meaningful glances and coy smiles at Trixie hint at an ulterior motive as well. 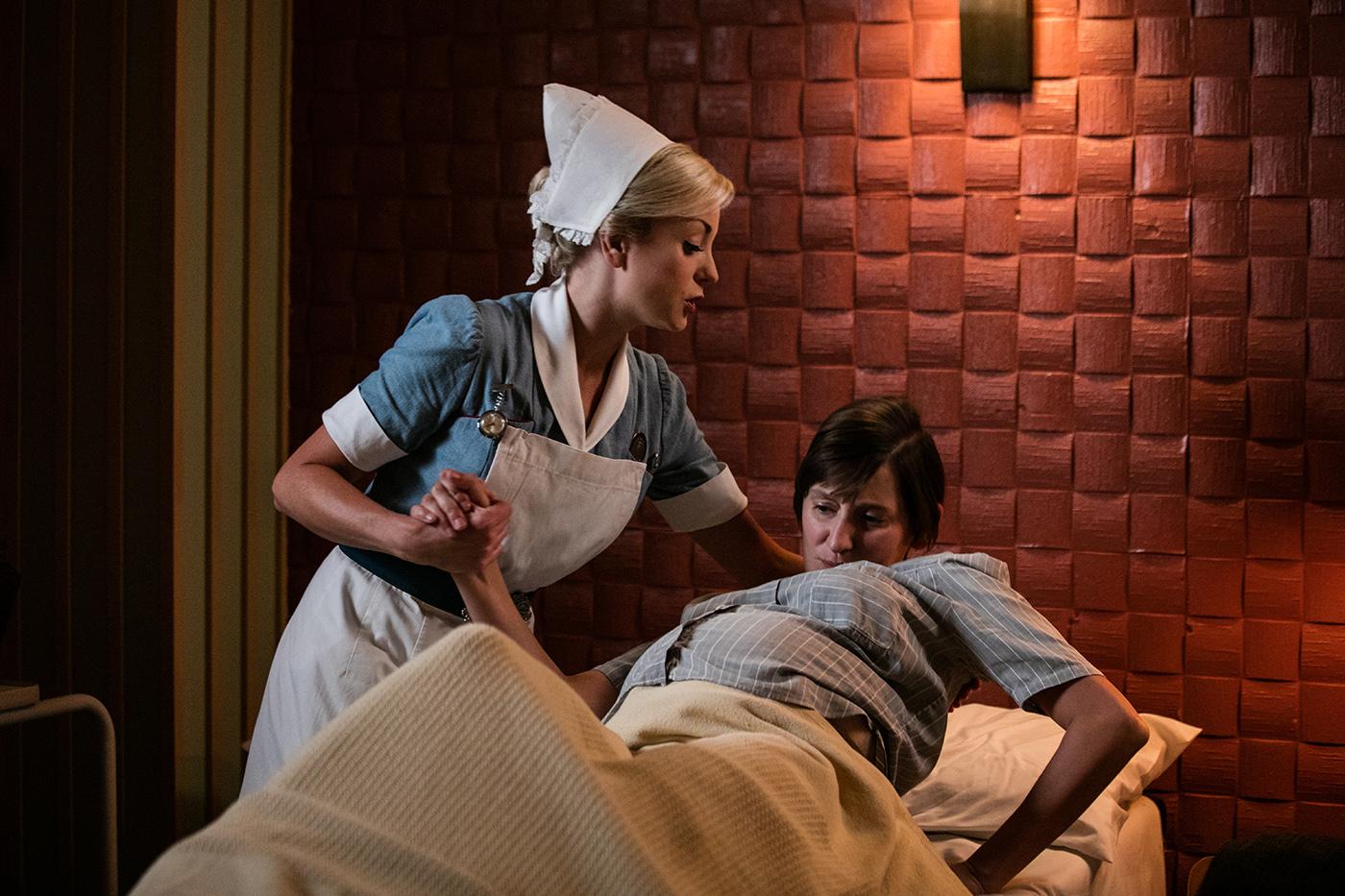 Trixie deals with a patient who is desperately afraid of dentists. Photo: Neal Street Productions 2016 As Crystal waits to go home after her operation, her water breaks. Trixie rushes her to the hospital, and the dentist follows – just to keep an eye on Crystal’s bleeding gums, of course. Amazed by the birth and impressed by Trixie’s skill in delivering a healthy baby, he asks the nurse on a date when she returns with Crystal for the toothless woman’s denture-fitting a few days later.

Reggie also finds a happy ending, although it’s more bittersweet for Fred and Violet. Shelagh stumbles upon an advertisement for a spacious and idyllic country estate that serves people with special needs. The expansive gardens excite Reggie, as does the prospect of interacting with people his own age. As much as he loves Fred and Violet, he is lonely for company similar to himself. Fred and Violet tearfully bid goodbye to the adoptive son who so touched their hearts, and he bestows some bulbs upon Violet as a parting gift.

Shelagh and the Turners also find a new home, when they buy a larger house to make room for the coming child. As always in Call the Midwife, there’s brightness at the end of every difficult road.