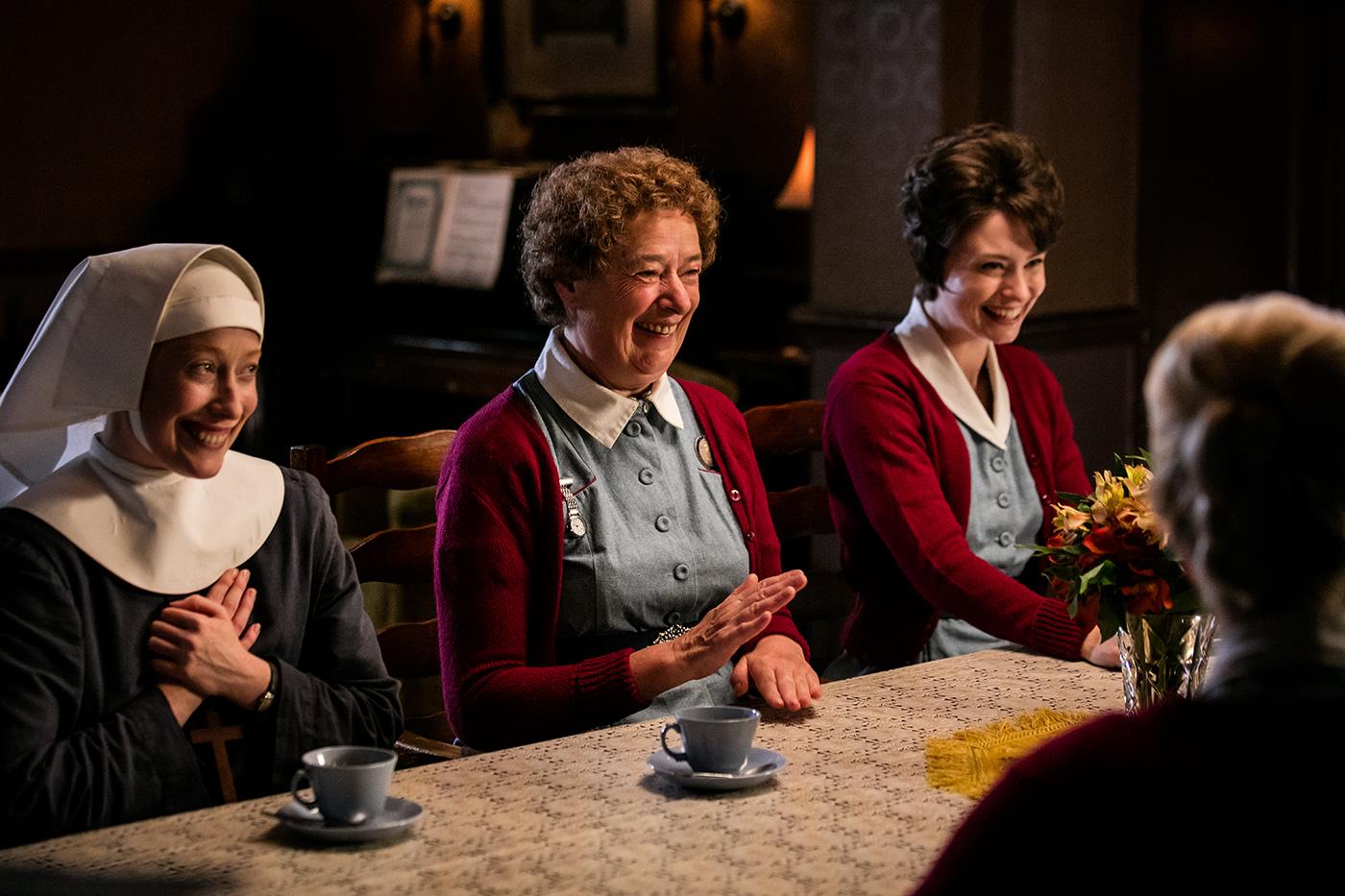 Joy approaches Nonnatus House, in the form of a baby and a wedding. Photo: Neal Street Productions 2016

Read our recaps of the previous episode and of the following season's holiday special of Call the Midwife.

The season finale of Call the Midwife is a grand summation. It manages to simultaneously wrap up plotlines and do everything for which the show is lauded: spotlight rarely-talked-about aspects of women’s health with both earnestness and humor, celebrate motherhood in all its forms, explore the shifting lot of women as societal norms change, and advocate loving compassion in all dealings with other people.

To all of those ends, four women hit major turning points in their lives. First, and latest in life, is Violet. She has begun menopause, and along with the hot flashes and headaches comes a sense of worthlessness.

Shelagh’s problem is not self-esteem but fear. She’s nearing the end of her pregnancy, and notwithstanding her experience as a midwife, is terrified. Luckily, she’s surrounded by comforting midwives who also happen to be her friends. Nurse Crane calms her and counsels her to prepare like any other pregnant woman, starting with choosing where she would like to give birth and which midwife she wants to attend her. Taking this advice, Shelagh stops working, decides to have a home birth, and asks Sister Julienne to attend.

The choice of Julienne wounds Nurse Crane, who expected Shelagh to pick her. Noticing this, Barbara asks Nurse Crane to be her bridesmaid. When Nurse Crane objects on the grounds that it should be one of Barbara’s friends, Barbara responds that Nurse Crane is one of her best friends, and taught her how to coexist with someone while they roomed together. This show can really make your heart glow. 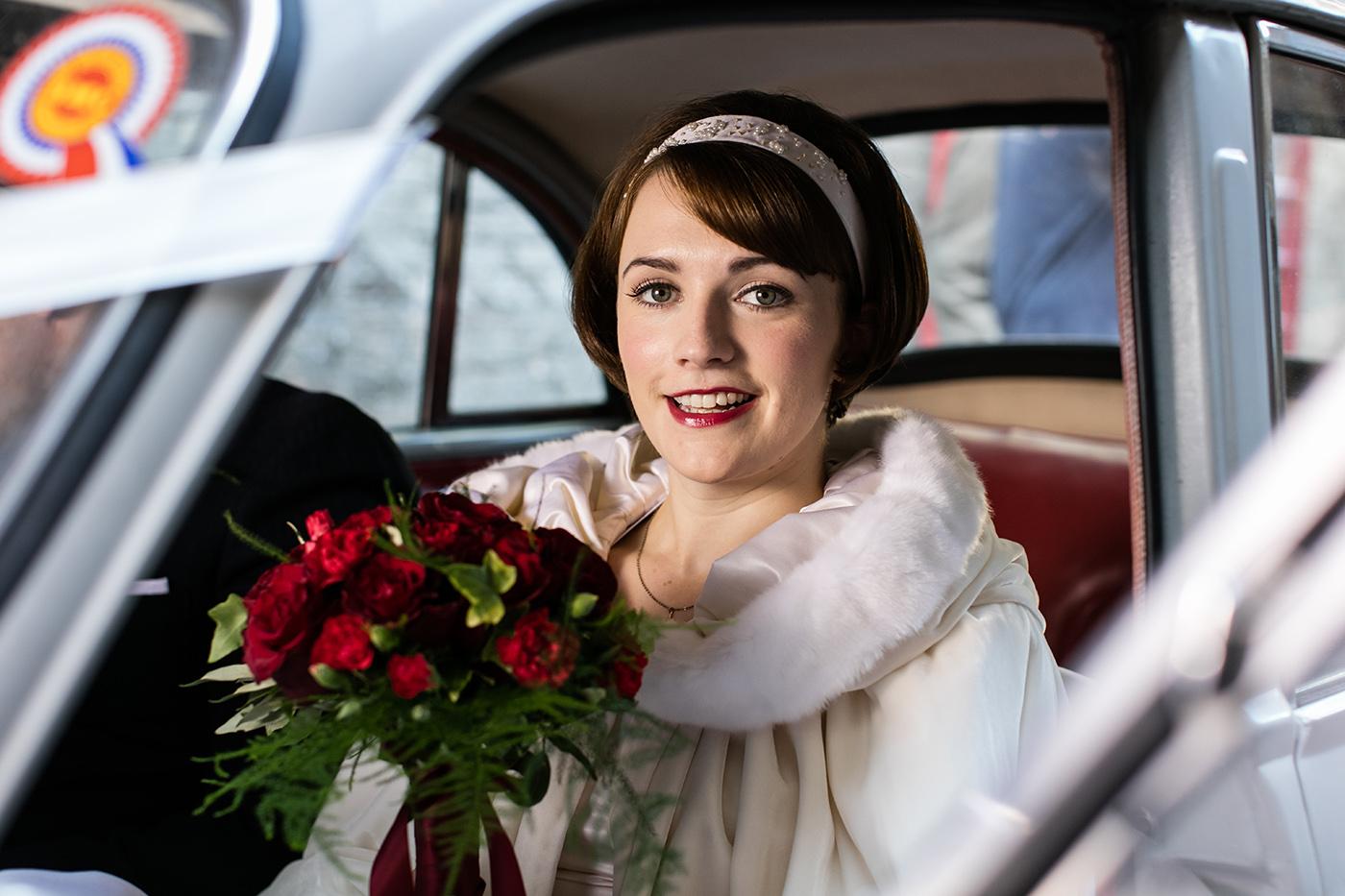 Barbara's marriage is suddenly and unexpectedly weeks away. Photo: Neal Street Productions 2016 Yes, Barbara’s marriage to Tom is approaching, sooner than planned. Her father has been assigned to be a missionary in New Guinea for three years, and leaves in three weeks. Barbara had always imagined that he would preside over her marriage, so she and Tom decide to move the wedding up to before her father departs.

One of the preparations Barbara must now cram into three short weeks is a visit to the new contraceptive clinic established at the Poplar center for women and children, where she receives a diaphragm that simultaneously befuddles and excites her. Although none of the midwives are happy that the government has recommended that a separate door be used for the contraceptive clinic, it is at least offering liberating freedom to the women of Poplar, such as Wilma Goddens.

Already the mother of three children, Wilma doesn’t want any more. She has just started working as a corsetiere and relishes the fulfilment that comes from a career, as well as the extra income. She doesn’t tell her husband Trevor about the birth control pills, because he still wants a son. 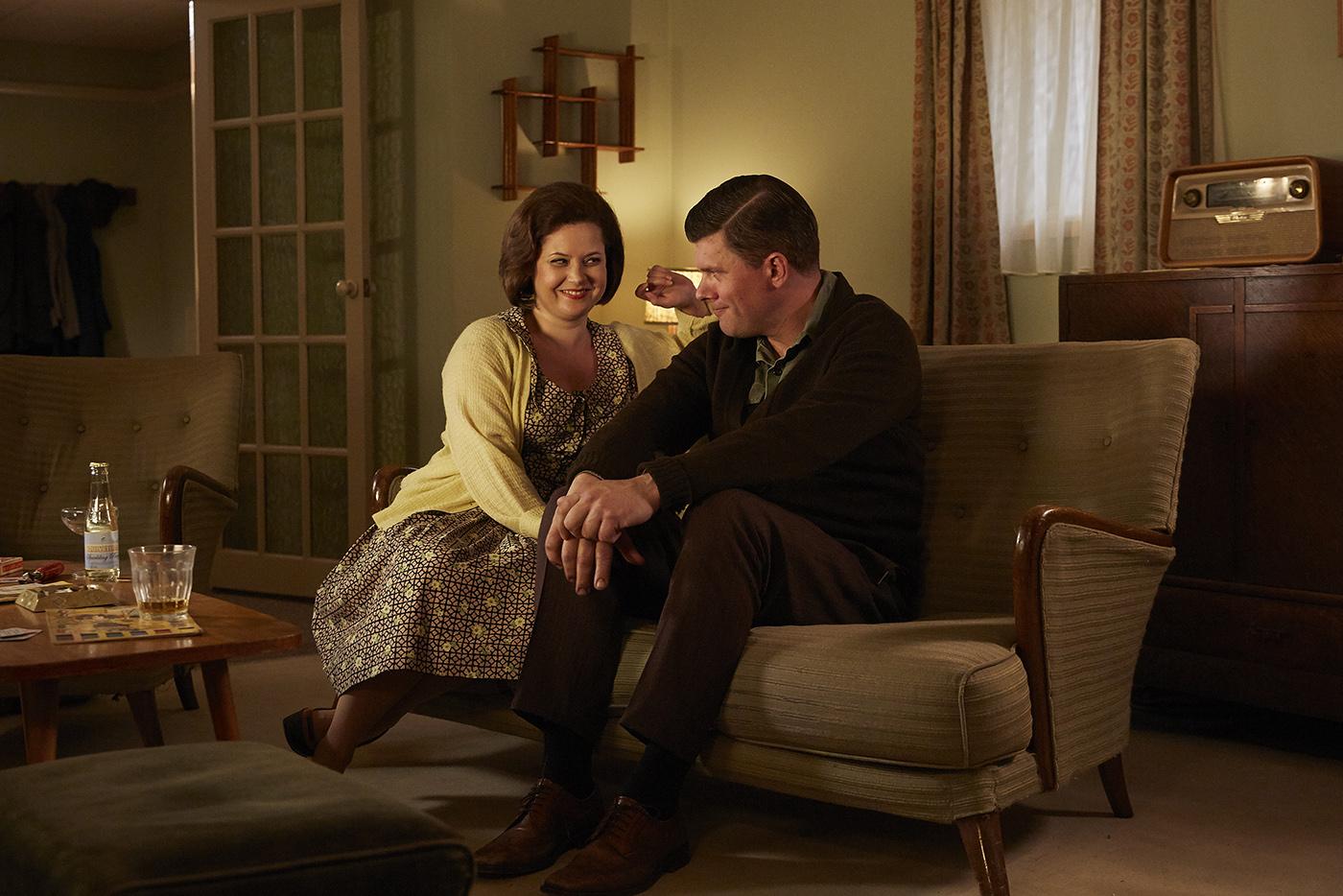 Wilma Goddens's life seems perfect now that she's on the pill. Photo: Neal Street Productions 2016 Wilma quickly excels at her career so much that she can buy a new couch, and her life seems perfect, other than an occasional crick in her leg. But the pain spreads, and soon she is being rushed to the hospital after collapsing in agony. She is diagnosed with a life-threatening blood clot and requires a tracheotomy to breathe. Even that drastic operation cannot save her, however, and Trixie applies makeup to spare her children the sight of seeing their dying mother in her true, pale condition. While doing so, Trixie discovers the birth control pills in Wilma’s handbag. This helps explain the emergency: the new pill has been linked to blood clots in some instances.

Tom, who was present while Trixie brought Wilma’s children to see her, commends the nurse on her skill with them. Such praise convinces Trixie to accede to Christopher’s request that she meet his daughter.

Violet has her own interaction with the bereaved Goddens family after Wilma dies. She was close to Wilma, and brings ribbons to the young girls to wear for the funeral. This goes some way to making her feel less useless, but a surprise visit from Reggie does much more. He even calls her “mum.” 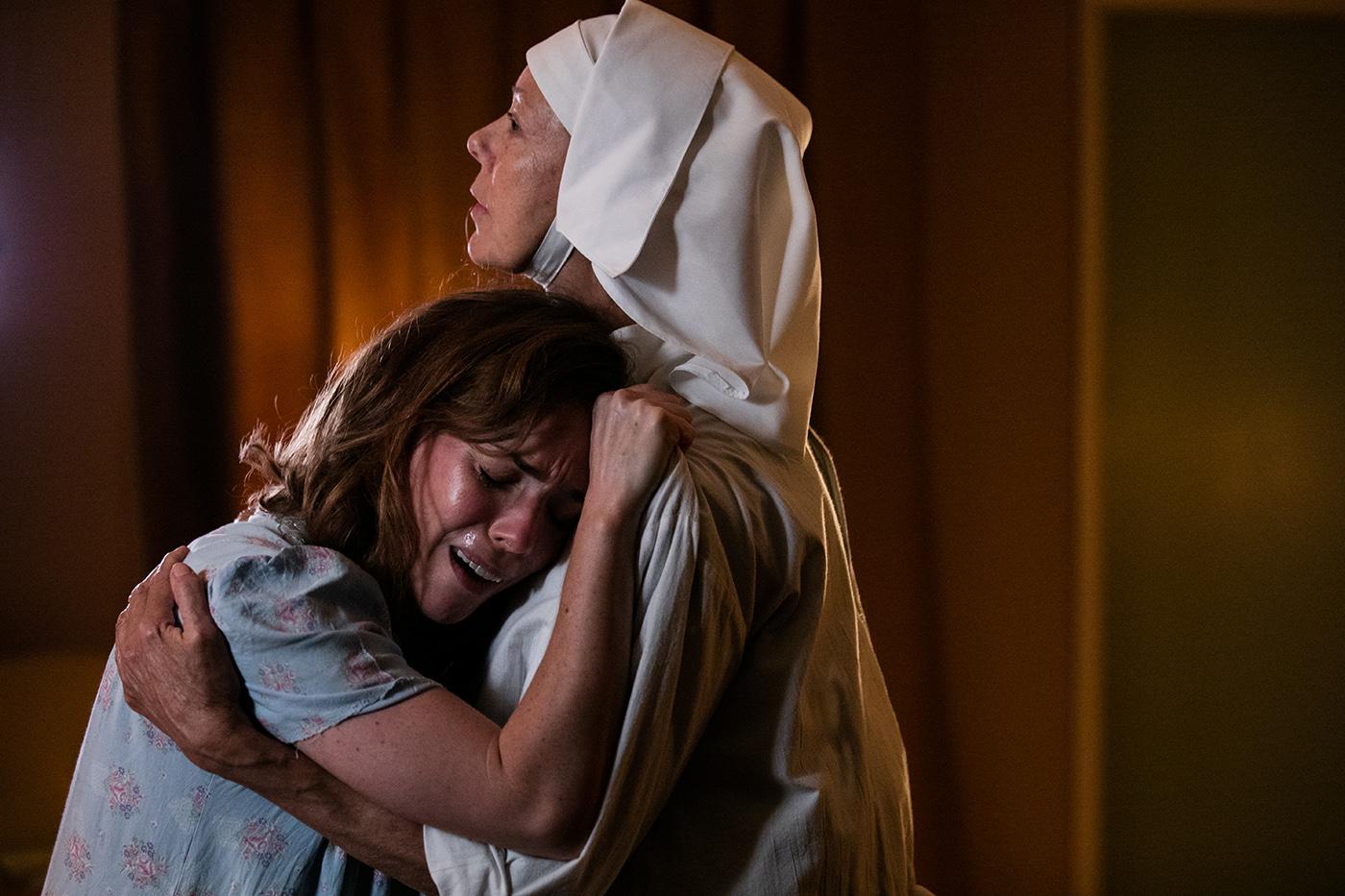 Delivering a baby seemed a lot easier to Shelagh from the perspective of midwife. Photo: Neal Street Productions 2016 Shelagh, meanwhile, is in the process of becoming a mum. She has forbidden Dr. Turner from attending the birth – she has been in too many delivery rooms with him – so she’s all alone with Sister Julienne. Labor is not at all what she expected: it’s a lot more intense than it looked to her from the perspective of midwife. When she follows Sister Julienne’s suggestion and begins singing to distract herself, Dr. Turner, who has been pacing outside the bedroom door, joins in the tune. Shelagh decides to let him in, and sits in his arms during the last few pushes. The Turners have a son.

As for Barbara, it turns out that planning a wedding on a limited budget in three weeks is not easy. In an attempt to save money, she is trying – and failing terribly – to sew her own wedding dress. Luckily for her, she has some extraordinary friends at Nonnatus House. They all contribute money to buy a new dress for her.

Tom also gets some money from his friends, although they part with it less willingly. Fred takes him out for a raging bachelor party during which Tom wins money from gambling. Both men also win an unpleasant hangover. With the money, Tom hires a carousel for the wedding reception – one of Barbara’s fondest memories is of her father taking her to ride on a carousel as a girl. As it begins to snow on the jubilant residents of Poplar at the reception, one final nurse is given cause for elation. Patsy has returned, pulling Delia from her depression. Joy reigns.