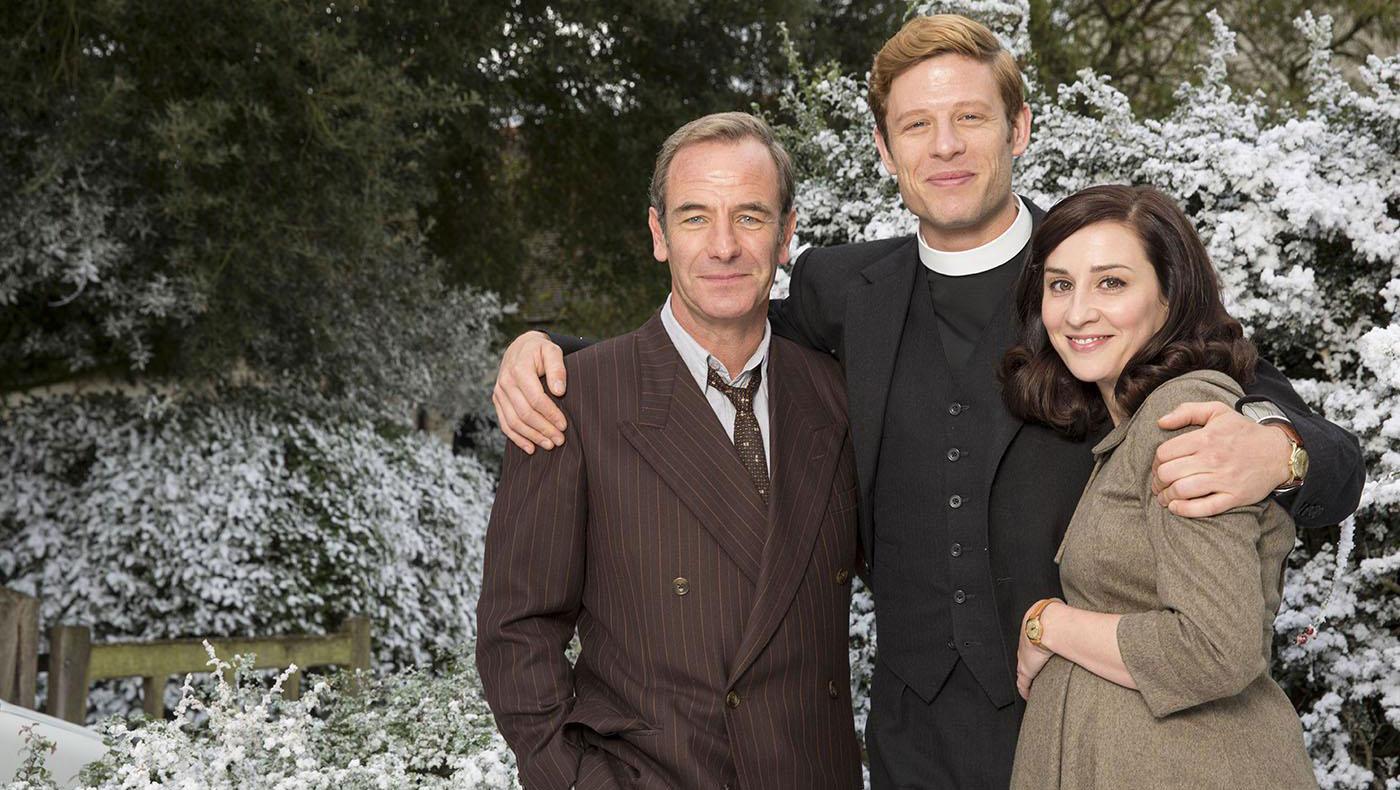 It's Christmas in Grantchester. Photo: Colin Hutton and Kudos/ITV for MASTERPIECE

Previous episodes of Grantchester are available to stream. Recap the next episode here.

We’re almost as far as possible from winter, given that the summer solstice is Tuesday, but it’s snowing in Grantchester. Season 3 begins with a Christmas special, and the holiday leads to some predictable behavior from our pals Sidney and Geordie: lots of whiskey on Sidney’s part, and grouchiness from Geordie in reaction to all the cheer. Sidney has avoided one parish duty by ceding the nativity play to Leonard, who is attempting a Brechtian reimagining with the distractible children. There is a singular exception to the routine, however: Sidney must figure out his relationship with Amanda as she nears the end of her pregnancy with Guy’s child.

The groom of a wedding never shows up to the ceremony, and is soon found dead. Photo: Colin Hutton and Kudos/ITV for MASTERPIECE Oh, and after the groom of a wedding officiated by Sidney never shows up, he is discovered dead in his office with the safe cleared of money. Bill Davis was a wealthy older banker due to marry a youthful burlesque dancer named Linda. They met at a “country club” – that is, a strip joint. Bill’s son Felix never approved of the marriage and suspects Linda is a gold digger. His suspicion only deepens when Geordie and Sidney discover that the blonde Linda had a previous life as a married redhead. But that husband died of natural causes.

When Sidney and Geordie visit Linda at her workplace (there’s definitely a joke somewhere about a vicar in a strip club), they get the impression that her employer Larry Simpkins is preventing her from talking about something. So Geordie sends Phil in for some reconnaissance. Unfortunately for Phil, the women are good at their jobs. He gets smashed and Simpkins escorts him outside, stealing his wallet in the process. Geordie intervenes and brings Simpkins in for theft.

The interrogation of Simpkins is quickly interrupted by a more promising lead. Bill and Linda’s weddings rings were found shoved down his throat, an imitation of a crime Geordie investigated years ago. In that case, Gail Tannen’s fiancé was also found dead, with rings in throat, on the eve of his wedding. Geordie suspected Gail’s father, Albert, was the culprit, but he could never pin it on him and the murderer went uncharged.

But now Geordie has another chance to solve that cold case. With Sidney, he visits Albert at his toy shop and Gail at her home. The father and daughter are estranged, as Gail blames her father for the long-ago murder. Albert’s granddaughter Jessica, the child of that almost-marriage, has an interest in Albert, however. She frequently haunts her grandfather’s stoop, and Sidney introduces Jessica to Albert after nabbing her when a friend of hers throws a firecracker into the toy shop. While the appearance of his granddaughter brings Albert joy, it also further incriminates him: Jessica tells Sidney that Albert was away from the shop on the night that Bill Davis was murdered. 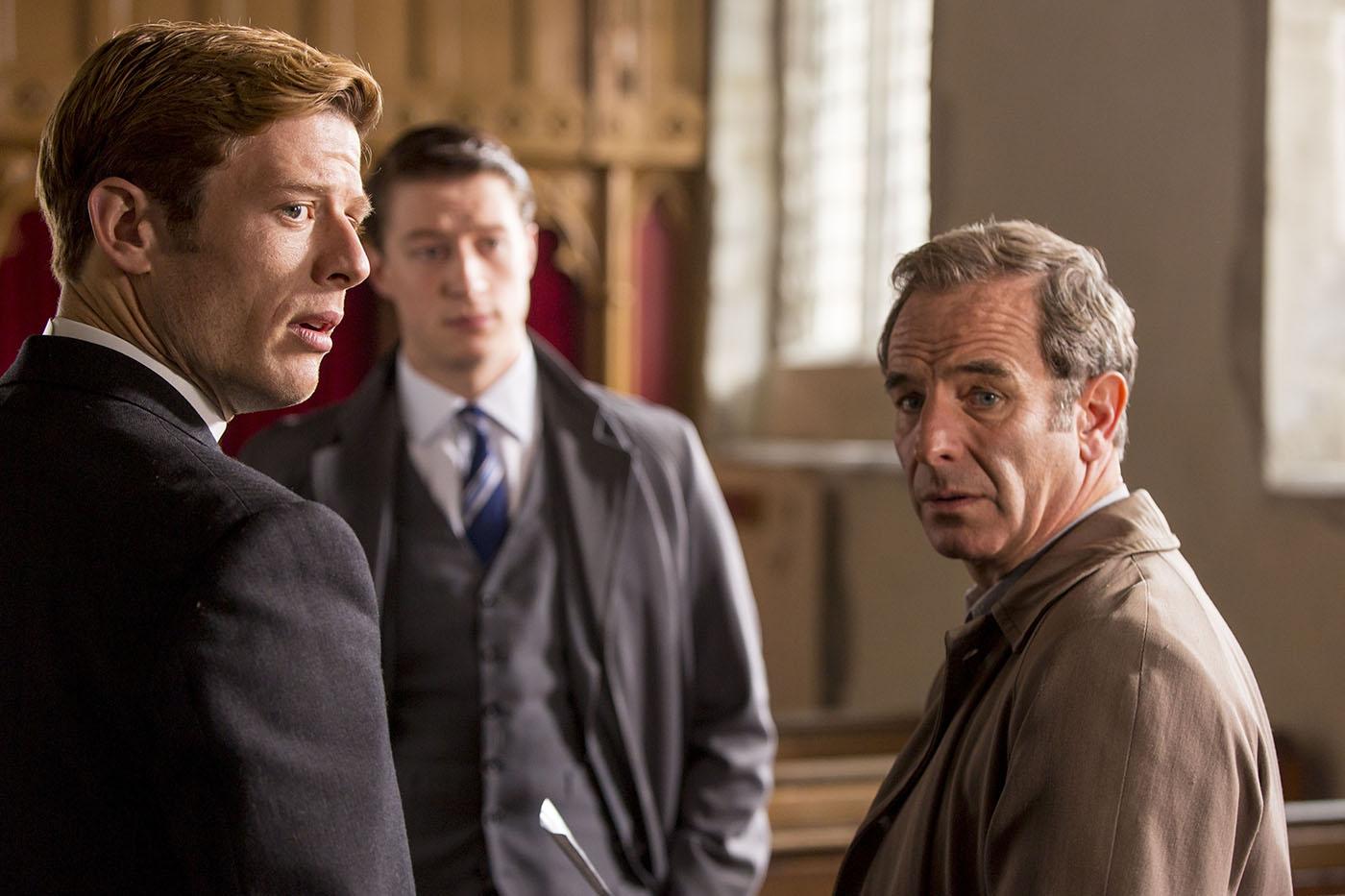 Sidney, Phil, and Geordie are led to Albert Tannen as a prime suspect. Photo: Colin Hutton and Kudos/ITV for MASTERPIECE Elsewhere in Grantchester, another father-daughter pair enter their own estrangement. With Sidney’s encouragement, Amanda has set up a meeting with her father at her Aunt Cece’s house, where she is staying in the wake of leaving her husband and being disowned by her father. But Eddie deepens his exile of Amanda by forcing Cece to stop housing her, leveraging the fact that both Cece’s son and husband rely on him for employment.

Too ashamed and proud to accept any more help, Amanda packs her bags and leaves with nowhere to go. Leonard finds her on a snowy bench near the rectory and insists that she come into the warmth. That offer becomes urgent when Amanda’s contractions begin. With the midwife and doctor both tied up by a breach birth, Mrs. Maguire is left to attend Amanda’s delivery.

Back at the toy shop, Sidney and Geordie have discovered a wounded Albert on the floor next to a slate with the message “Confess!” A young assistant of Albert’s is the culprit: Albert’s business is failing and he owes the boy money, so the boy thought he would give Albert a scare. While visiting Albert in the shop later, Sidney notices that one of his tools perfectly matches a gouge on the door of Bill Davis’s office. Albert is arrested.

Under interrogation, he maintains his innocence but grudgingly accepts that the detectives will never believe him. He disliked Gail’s fiancé because he caught the young man with another woman. And he damaged Bill’s door because the banker ridiculed him for asking for a loan. Left with this information, Sidney and Geordie learn that Amanda is in labor and rush to the rectory to wait it out with whiskey – three bottles’ worth. 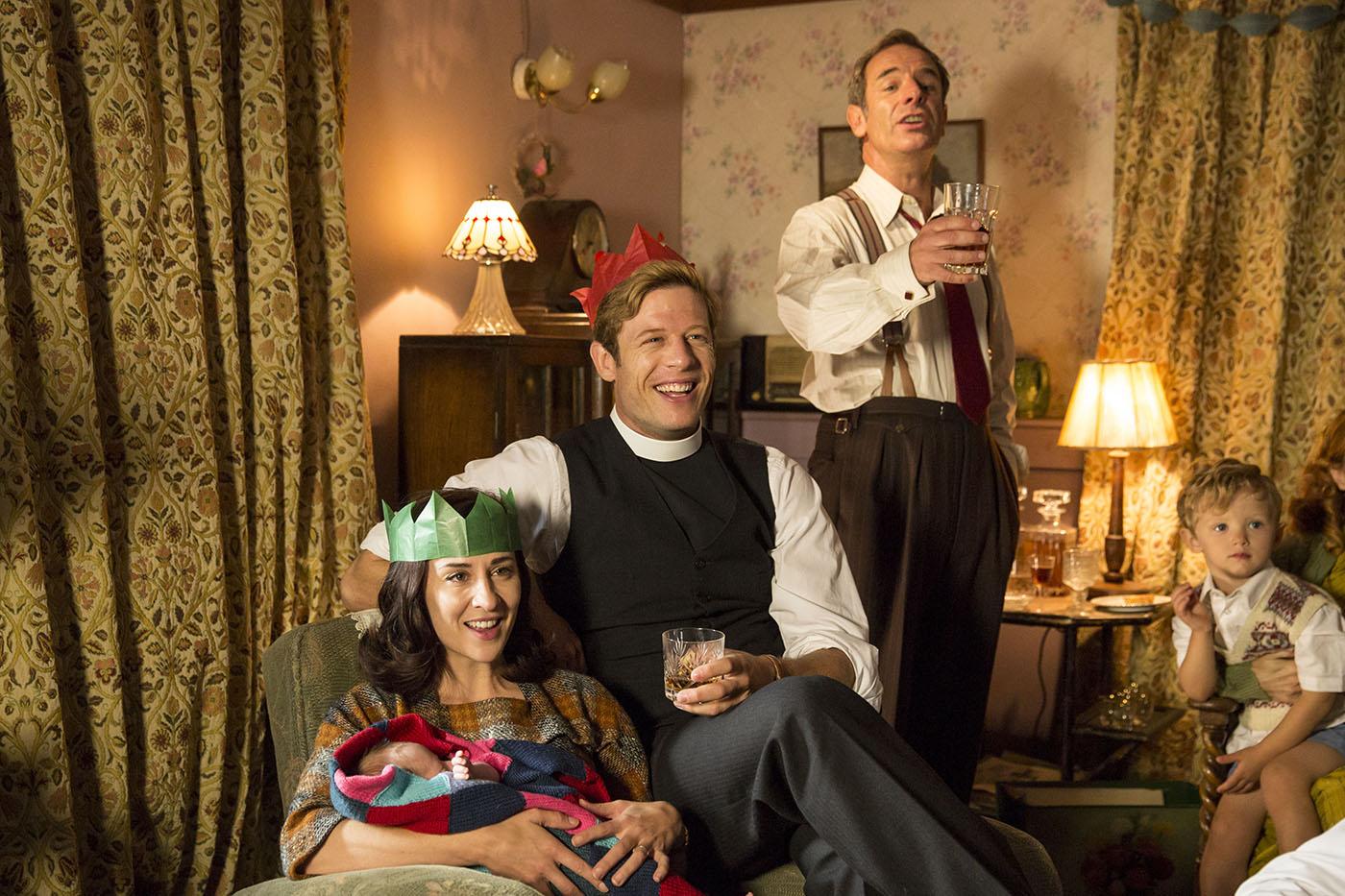 It's a happy Christmas in Grantchester when Amanda gives birth. Photo: Colin Hutton and Kudos/ITV for MASTERPIECE Deep into the night – and the liquor – Sidney has an epiphany. The spurned lover of Gail’s fiancé, whom he left to marry Gail, is the murderer in both cases. What connection did she have to Bill Davis? She was his fiancée. Sidney catches the now brunette Linda on a bus out of town and brings her in. She killed Bill after they got in a fight, then took his money to hightail it and start a new life, just as she had after murdering Gail’s fiancé. Cleared of guilt, Albert and Gail reconcile, and he spends Christmas Eve with his daughter and granddaughter.

Sidney also spends the holiday with a new addition to his family: Amanda’s infant daughter. But there is still a pressing question, less easily solved than a murder: How will he and Amanda make this work?