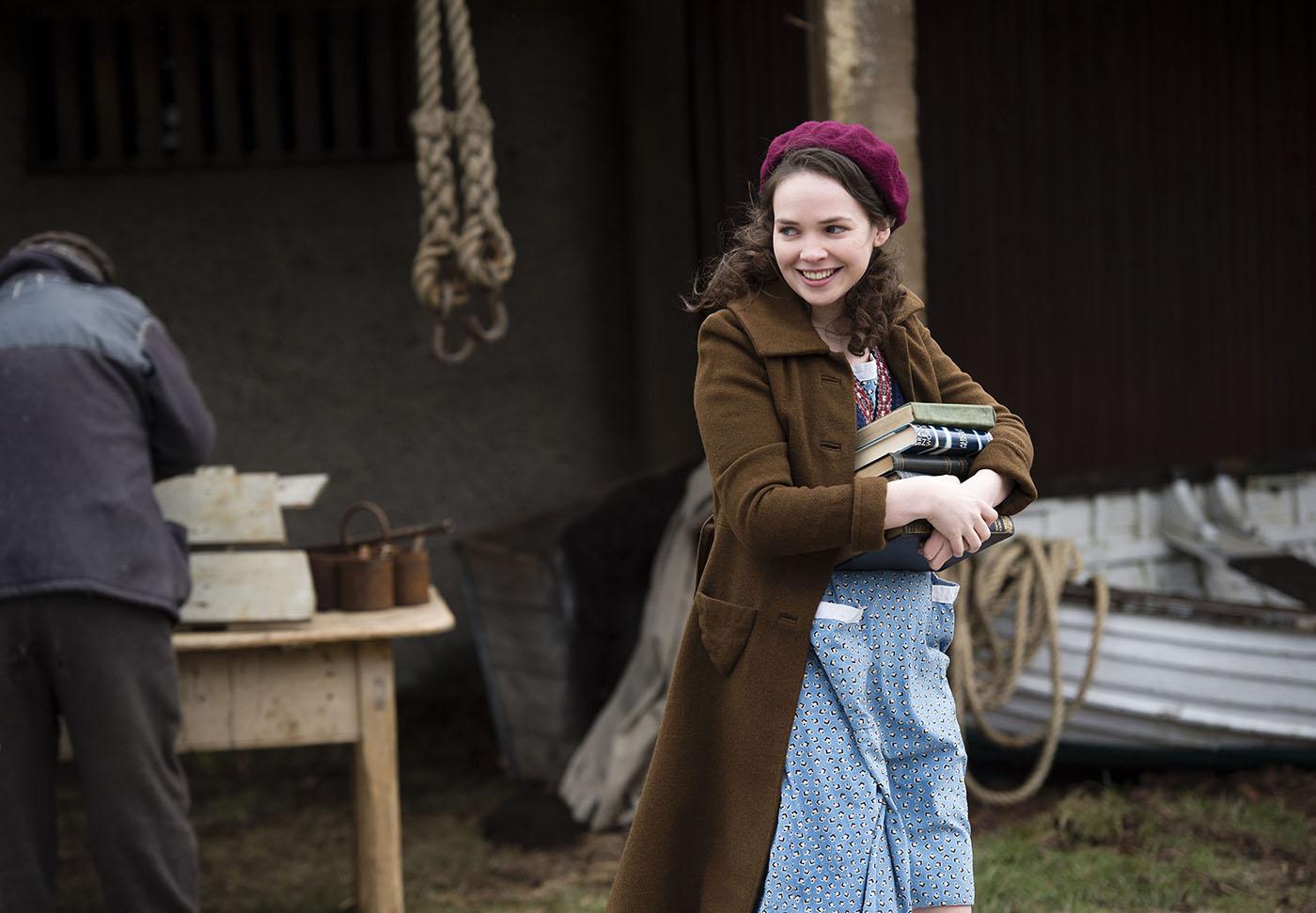 Emma Coyne is bookish and eager to prove her worldliness. Photo: Steffan Hill/BBC 2016 for MASTERPIECE

My Mother and Other Strangers airs Sundays at 7:00 pm. You can stream previous episodes. Recap the next episode here.

In a provincial town in the British Isles during World War II, a married woman nervously enters into a flirtation with a foreign soldier. The men of his company, based nearby, are regarded with hostile suspicion by the locals. No, this is not Pat and Marek’s romance in the second season of Home Fires. It’s the new Masterpiece drama, My Mother and Other Strangers.

Great Paxford has been exchanged for the Northern Irish town of Moybeg, where locals gather eels from the gray shores of Lough Neagh and constant rain reduces roads to muddy ridges. The country existence is periodically interrupted by the roar of Flying Fortress bombers landing at a nearby American airbase, whose soldiers drive Jeeps into town searching for dates and beer. 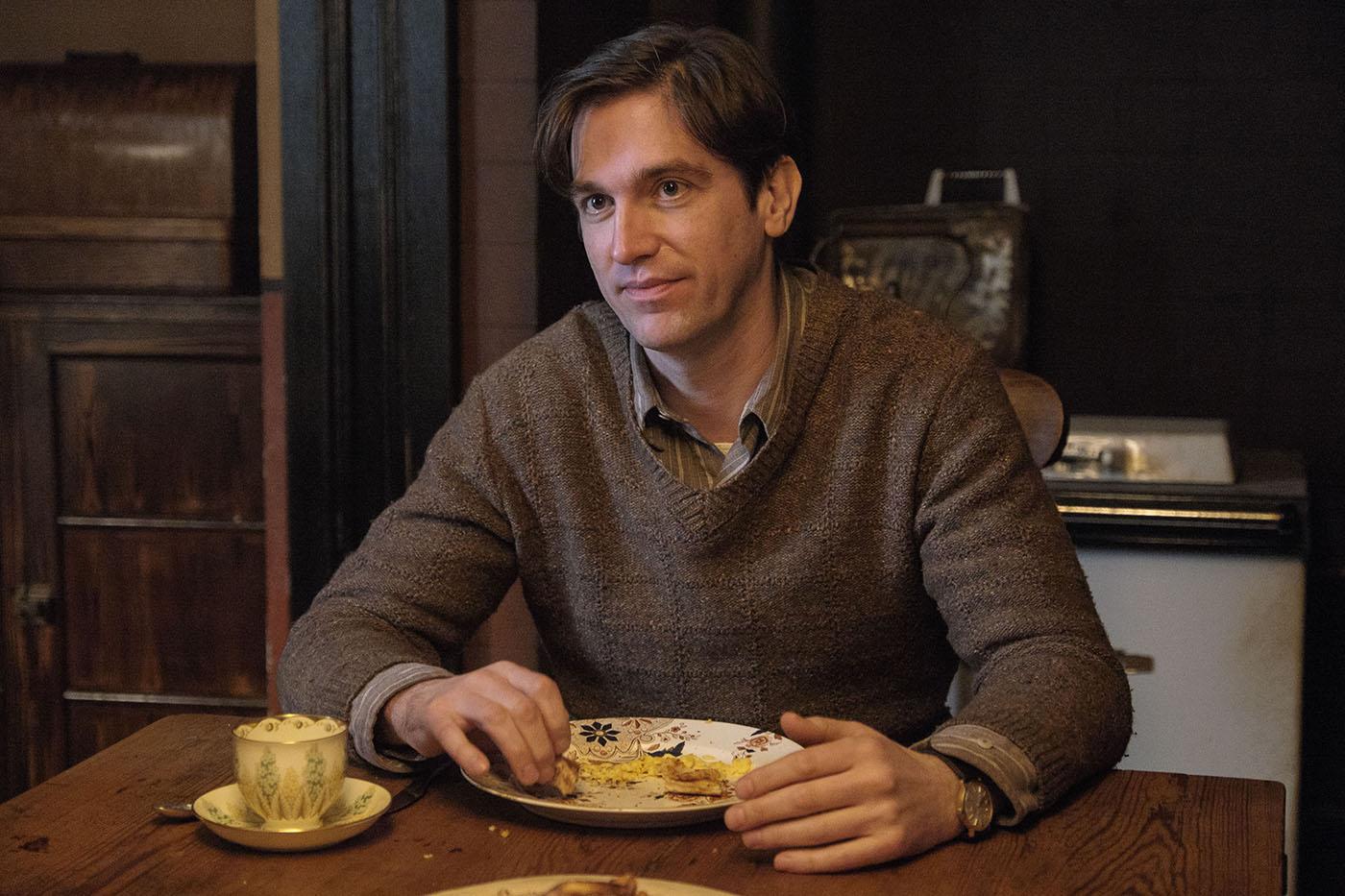 Michael Coyne owns Moybeg's pub and grocery. Photo: Steffan Hill/BBC 2016 for MASTERPIECE The pub they frequent is owned by Michael Coyne, who runs the bar and an attached grocery with his wife, Rose. Rose is a bit of an outsider in Moybeg. She’s English and well-educated, with a love of Tennyson. Her sixteen-year-old daughter Emma and younger son Francis are being raised to speak “properly,” instead of with the rural grammar that Michael sometimes slips into. Emma is bookish and has her sights aimed higher than the small town. Francis is reserved and observant – he provides the retrospective voice-over that bookends the episodes.

A few virile soldiers decide to look beyond beer in order to lighten the dreary tedium of their lives, and attend a dance at the quaint parish hall. But their entrance immediately causes the music to halt and generates icy stares. Knowing when they’re not welcome, the soldiers leave – but not before the handsome Lieutenant Barnhill flashes a smile at Emma Coyne, and a gang of Moybeg men threaten a fight.

Barnhill later offers Emma and Francis a ride in his Jeep as the pair goes to collect eels, Barnhill’s eager countenance a contrast to the flat, drab landscape. After some nervous back-and-forth between a flushed Emma and a self-conscious Barnhill, he asks her to the movies and offers her a gift before driving off.

Hoping to continue the courtship, Barnhill comes to the Coyne house and requests permission from Michael to take Emma to the movies. Michael dismisses him and warns him not to think of it again. As teenagers will do, Emma defies her father and drives to town with Barnhill anyway. Once at the theater, however, she is upset that everyone seems to be there just to make out. She quickly leaves and a disappointed Barnhill follows. Trying to redeem herself, she kisses him in the car, but he realizes that she is simply attempting to prove her maturity, and he demurs, bringing her back home. 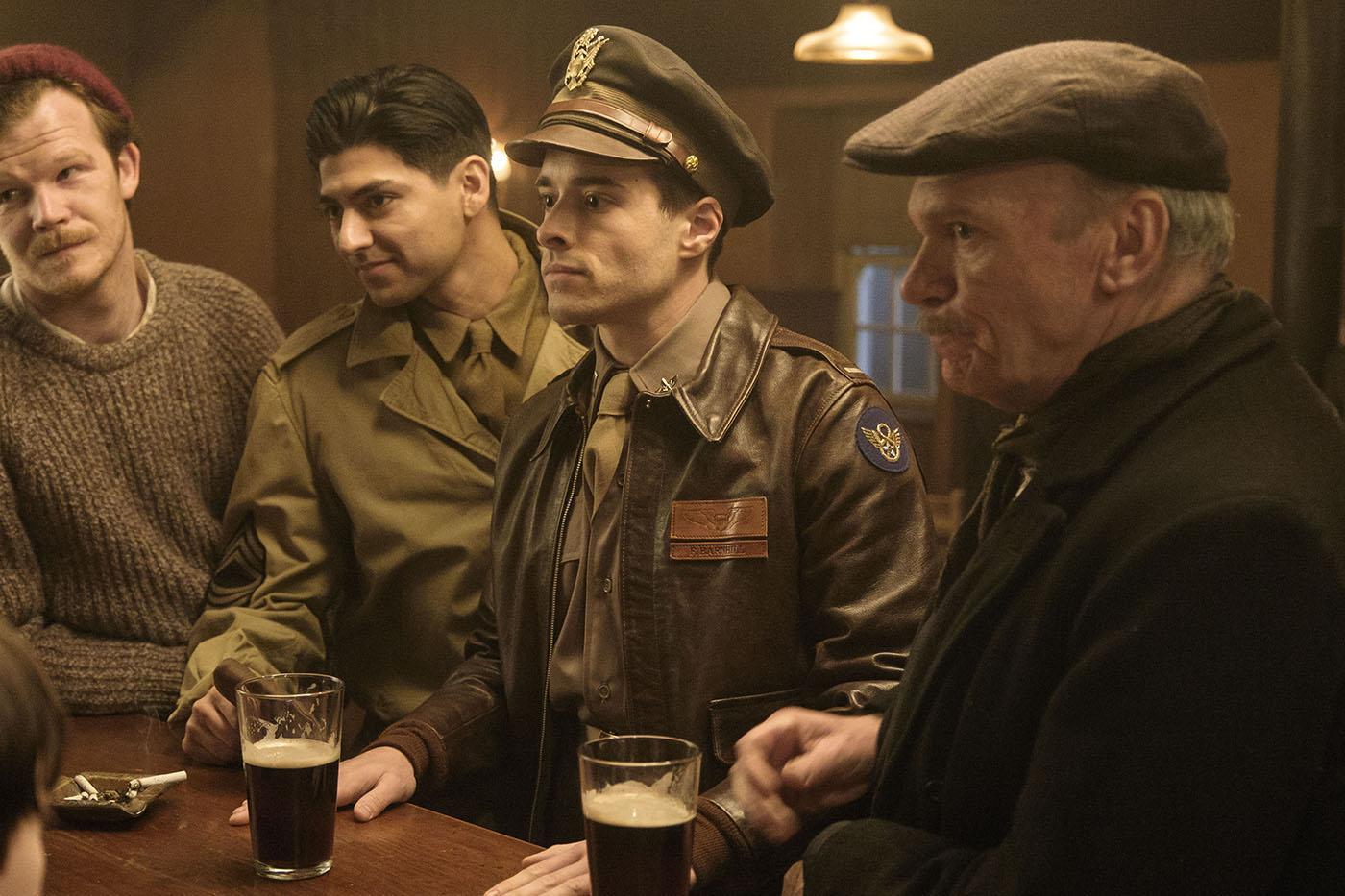 Frank Barnhill's interest in Emma causes trouble in Moybeg. Photo: Steffan Hill/BBC 2016 for MASTERPIECE Unfortunately, Michael is waiting for them, having been apprised of the date by a Moybeg lad who saw Emma and Barnhill drive off. Michael furiously confronts Barnhill, who responds with polite but intense restraint before returning to his base.

Meanwhile, Rose has met her own dashing American. She first encounters Captain Dreyfuss while walking on the shores of the Lough. Impressed by his sensitivity to the natural beauty, she is further smitten when he appears at the pub for advice on how to better integrate his soldiers into Moybeg, and casually quotes Tennyson. Their awkward conversation mirrors the flirtation of Emma and Barnhill, although neither of them yet acknowledges the attraction.

The way that Rose hides away a button from Dreyfuss’s coat found while out walking by the Lough does suggest that she is aware both of her budding affection and that she should keep it a secret from her husband. Her suppressed feelings are further confirmed when she discovers Barnhill’s gift to Emma and confiscates it, stowing it with the button: two tokens of forbidden romance, stashed together in a drawer. The situation helps her sympathize with her daughter and her beau, and when Dreyfuss appears at the Coyne home to again ask advice on how to build up good will, she refuses to divulge Barnhill’s name after reporting the incident between Michael and the lieutenant. 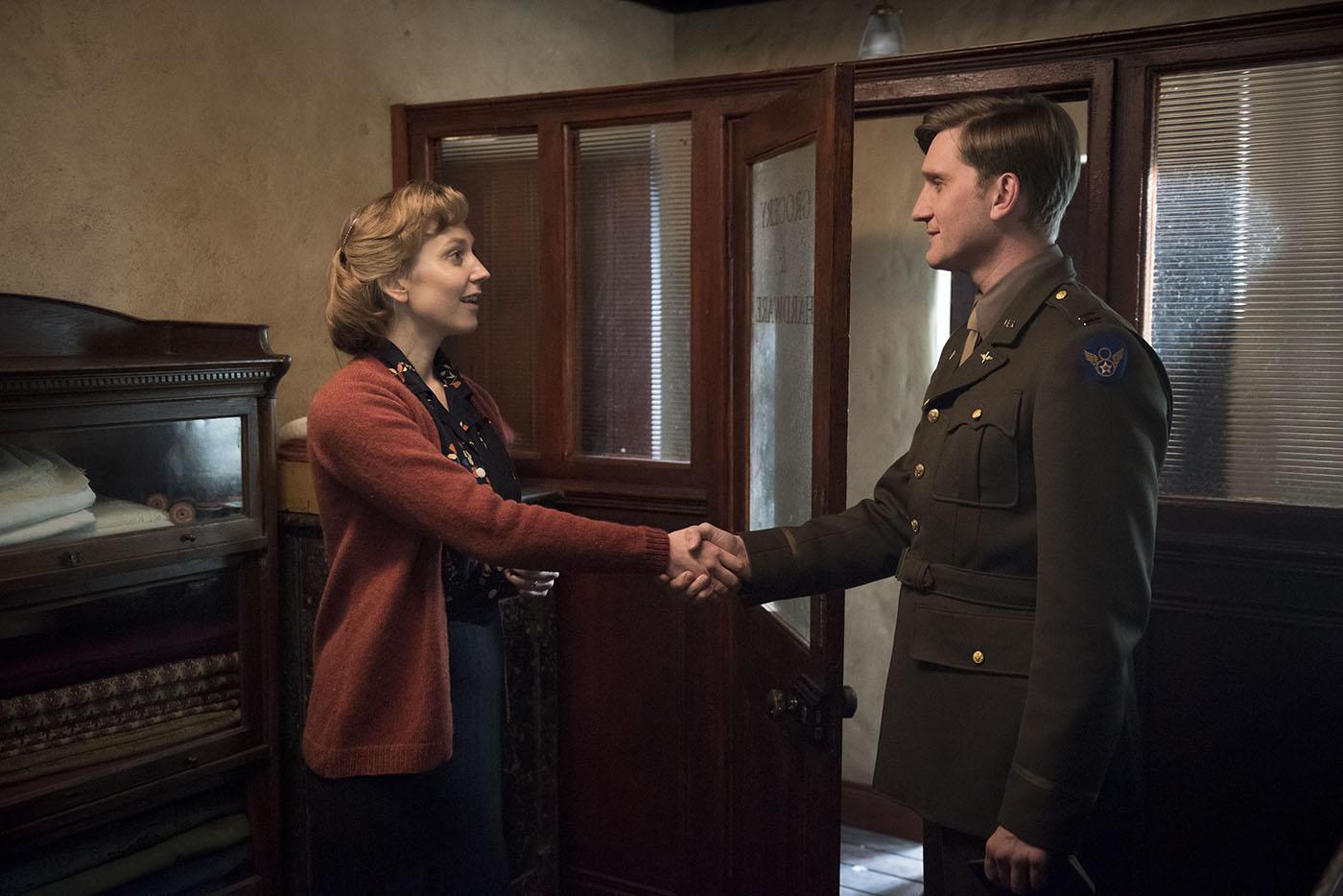 Neither Rose Coyne nor Captain Dreyfuss admit their feelings, but it's clear there is something growing between them. Photo: Steffan Hill/BBC 2016 for MASTERPIECE But Barnhill soon gets himself into more trouble. Scheduled to ship off to war in two days, he comes to the Coyne pub for one last drink. After getting drunk with the suddenly friendly locals, he begins to stagger back to base but first calls for Emma from the street. As she sneaks to the window, he is pulled into a barn by a gang of locals, who begin to beat him. Emma rushes to her father, who tries to break up the fight but is ignored. Then Rose appears with a shotgun, and Barnhill is released.

Dreyfuss again visits the Coynes to inform them that the American commanding officer has made their pub off-limits to the soldiers for two months. Before leaving, he hands Rose a note to Emma from Barnhill, who has shipped off. She accepts, but refuses to give it to Emma – she doesn’t want a cloud to hang over her daughter’s head if he dies in war, which he does a few months later. Thus one dangerous romance is ended, while another begins to bloom.