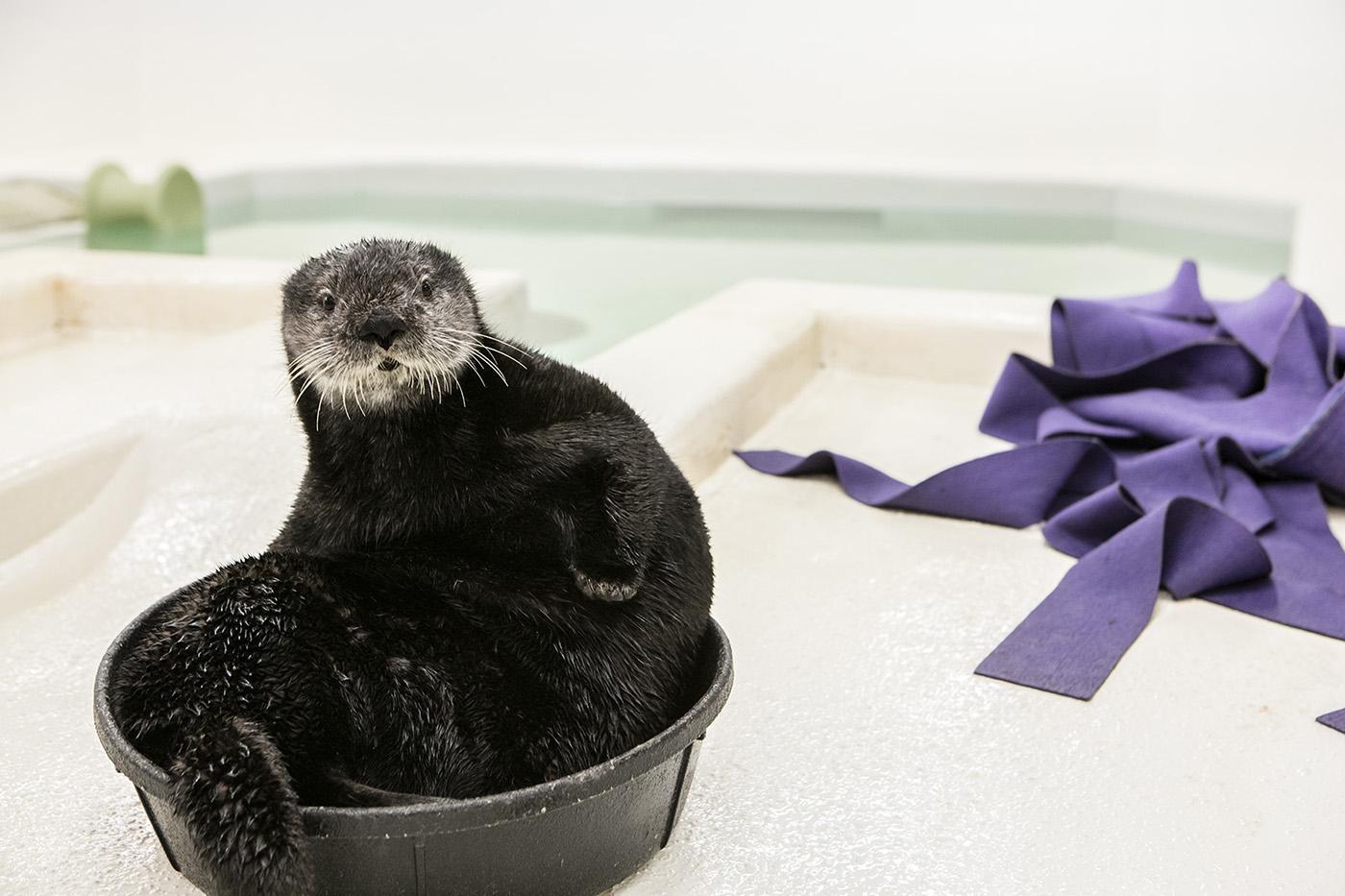 A sea otter’s fur is so dense that one square inch of it could cover an entire German shepherd. Dolphins never fully sleep: one hemisphere of their brain is always awake so that they can continue to surface in order to grab a breath. Beluga whale calves are generally born tail first. Such fun facts spill easily and eagerly from Jessica Whiton and Tim Binder.

Both of them work at Chicago’s Shedd Aquarium, where Whiton is the supervisor of marine mammals and Binder is the executive vice president of animal care. Between the two of them, you can learn the amount of calories a Pacific white-sided dolphin at Shedd eats a day (30-40,000), how many pregnant beluga whales there are in North American aquariums (three, as of May), and how many gallons of water are in the habitats of Shedd’s Abbott Oceanarium (two million, made into artificial saltwater through a treatment called, no kidding, “Instant Ocean.”). 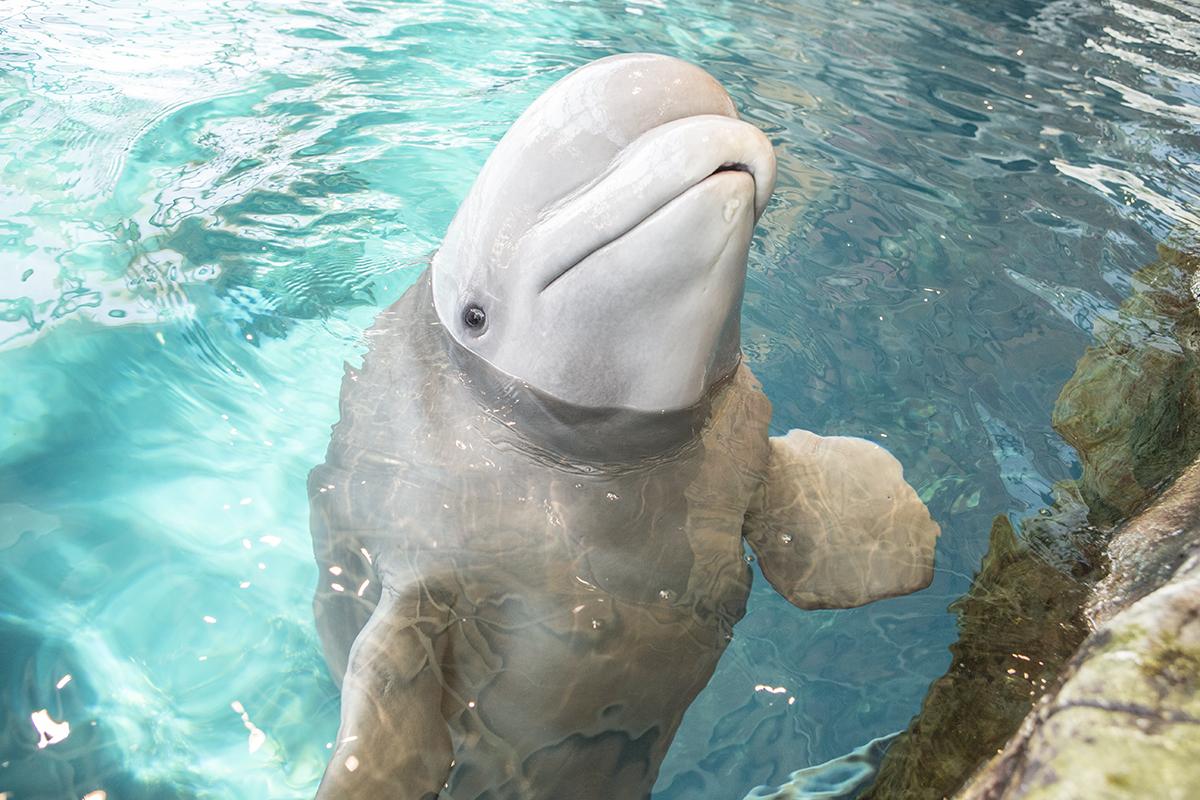 Bella the beluga whale at Shedd Aquarium. Photo: ©Shedd Aquarium The Oceanarium, which opened in 1991, models a coastal environment of the Pacific Northwest. It is populated by four major species: Pacific white-sided dolphins, which range across the Pacific Rim from Baja, Mexico to China; beluga whales, found in the Arctic and around Alaska; sea otters from California and Alaska; and Californian sea lions. All of these animals are apex predators or at least near the top of the food chain, so they are especially sensitive to ecological shifts such as chemical fluctuations or the population changes of other species in their habitats. They can therefore serve as a marker of the health of their ecosystem.

It is this status as a sort of ecological monitor that makes it important to maintain these species in aquariums, Binder says. It is much easier to study a dolphin or whale in human care than in the wild, so the techniques used by veterinarians to conduct physical examinations of these animals are developed in aquariums. Animals in human care are trained to undergo the physicals – because they voluntarily submit to the tests, their stress levels do not rise as a wild animal’s would, leading to more accurate readings. Those readings are then used as a baseline with which to compare findings from wild animals. If changes in the health of a wild population are observed, they may be a signal of a larger ecological problem.

The presence of these species in aquariums also allows marine biologists to closely monitor pregnancies and observe births, which are rarely seen in the wild, says Whiton. As a whale or dolphin nears the end of a pregnancy, twenty-four hour monitoring is set up from an observation room in the Oceanarium. In 2016, Shedd captured footage of the birth of a Pacific white-sided dolphin calf after three hours of labor. 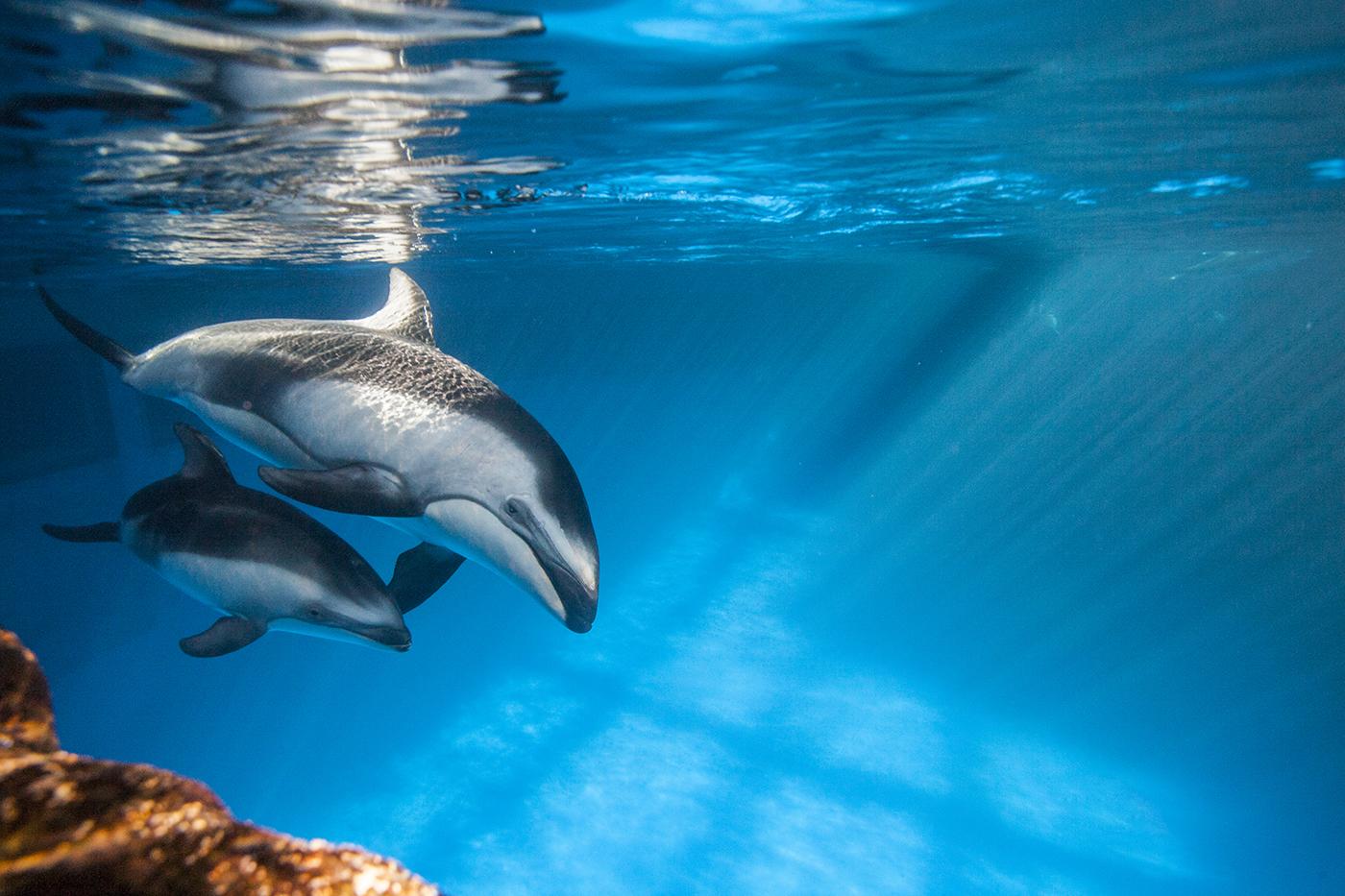 Katrl gave birth to Kukdlaa in 2016 and Shedd captured footage of the birth. Photo: ©Shedd Aquarium Cetacean labor and postnatal care involves several difficulties that arise from giving birth in water. A calf must begin swimming almost instantly, in order to surface and catch its first breath. As Whiton starkly puts it, “If you don’t learn to swim, you die.” The calf must pair with its mother, who has to teach it to swim and to nurse. In the wild, all of this could occur in water with visibility of only a foot, or as the animals swim through massive waves. Faced with these challenges, Whiton says that, “First-time moms don’t know what they’re doing. They take a while to figure out how to teach their calf these survival skills.”

If cetacean calf-rearing seems difficult, however, sea otters encounter even more challenges. Almost all sea otters in aquariums were stranded or orphaned while young. Without a mother to teach them how to survive, these otters would die on their own. They are rescued by institutions such as the Monterey Bay Aquarium or the Alaska SeaLife Center, both of which are the source of Shedd’s sea otters. 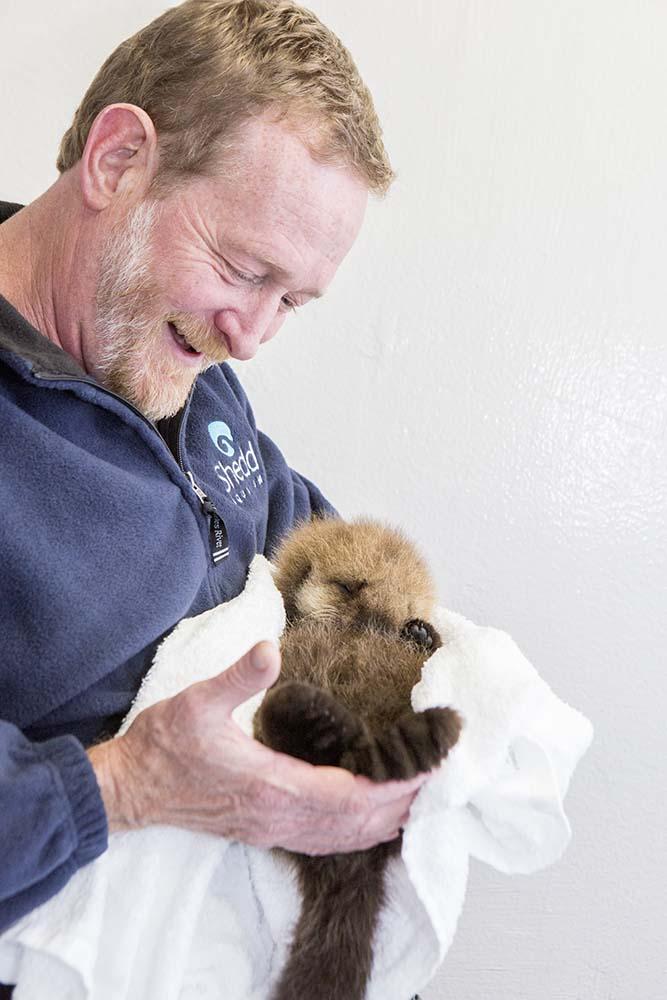 Tim Binder with the rescued sea otter pup Luna. Photo: ©Shedd Aquarium Sea otters are kept warm in chilly water by their extremely dense fur – the thickest in the animal kingdom – so they must spend around four hours a day grooming their coat. If an otter does not keep its fur clean, it will die of hypothermia. But grooming is a learned behavior. In the absence of a mother to act as a teacher, trainers at Shedd must show the young otters how to groom instead, even using hair-dryers to help. But once those otters learn to groom, they can never be released back into the wild, for they still would be unable to survive on their own. As Binder says, “For sea otters, survival is not instinctual, it has to be taught.”

Shedd does have one sea otter that was neither orphaned nor stranded. While aquariums are prohibited from breeding otters, which are held under permits from the U.S. Department of Fish and Wildlife, one particularly ingenious female in Seattle ended up becoming pregnant after removing her contraceptive device. “It was a bit of a surprise,” Binder says. Her baby then came to Shedd. No matter how much humans try to monitor or train marine animals, the animals will always find ways to surprise and confound us. And when they do, the team at Shedd will be there, watching and learning.