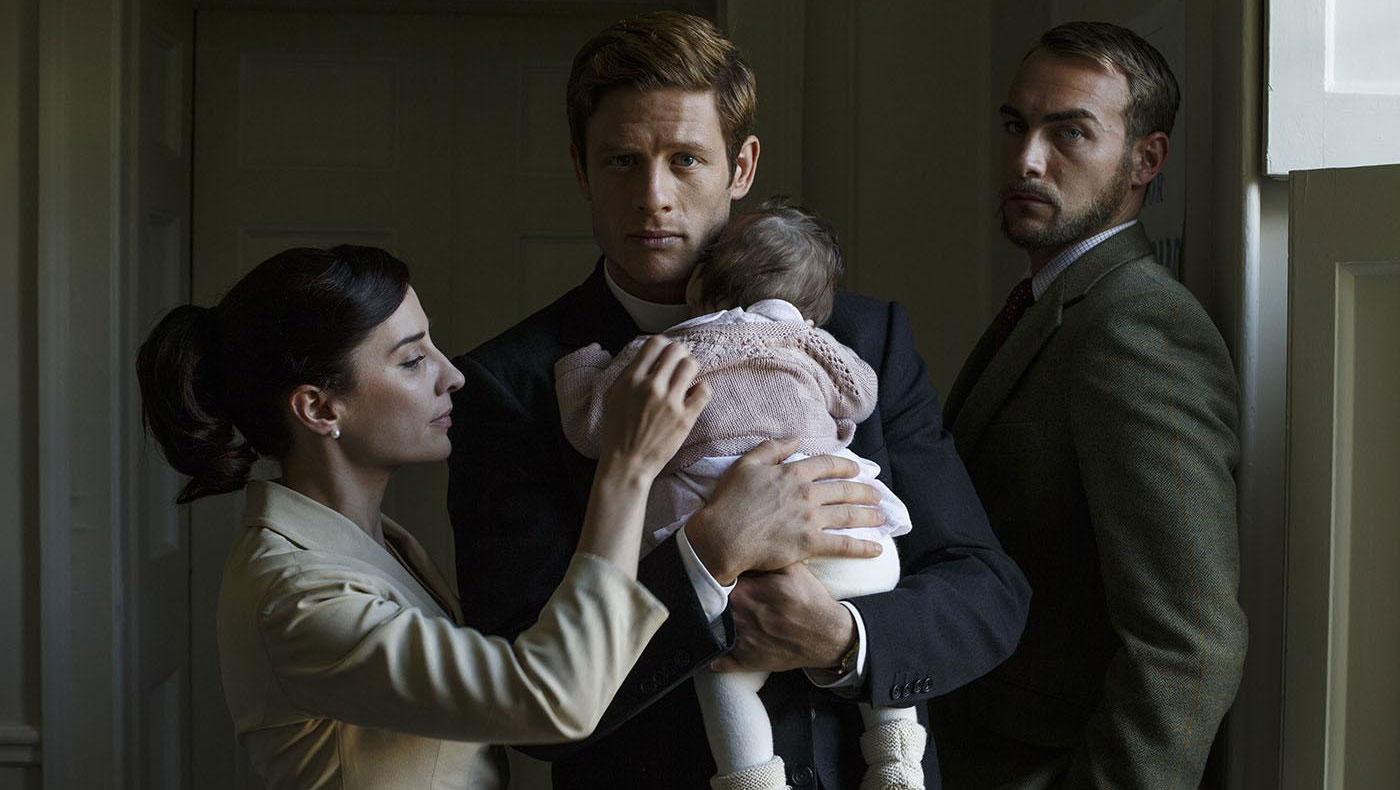 Amanda's baby is put into danger as Sidney is threatened while solving a murder. Photo: Colin Hutton and Kudos/ITV for MASTERPIECE

Previous episodes of Grantchester are available to stream. Read our recaps of the previous and the next episode.

After the interregnum of the Christmas special, Grantchester returns to the issue of society’s treatment of people with mental challenges. (A running plotline of the second season focused on the trial of the challenged teen Gary Bell.) The murder victim this week is a Dr. Atwell. He is the attendant at a facility for the “feeble-minded,” and in his free time runs a soup kitchen. Killed while dispatching the duties of the latter position, he is discovered by the church caretaker, sprawled on the floor of a church, red tomato soup staining his chest and water leaking out of his mouth – he was drowned.

When Sidney and Geordie search Atwell’s home, Sidney recognizes a nurse in a group photo, although he can’t remember who she is. The bedroom holds a macabre surprise: a dead crow splayed on the mattress. This is an especially distressing omen for Sidney. When he returned to the vicarage late the previous night, the same sign was waiting for him in the kitchen. The ominous warnings continue when he gets a phone call filled with heavy breathing and nothing else. 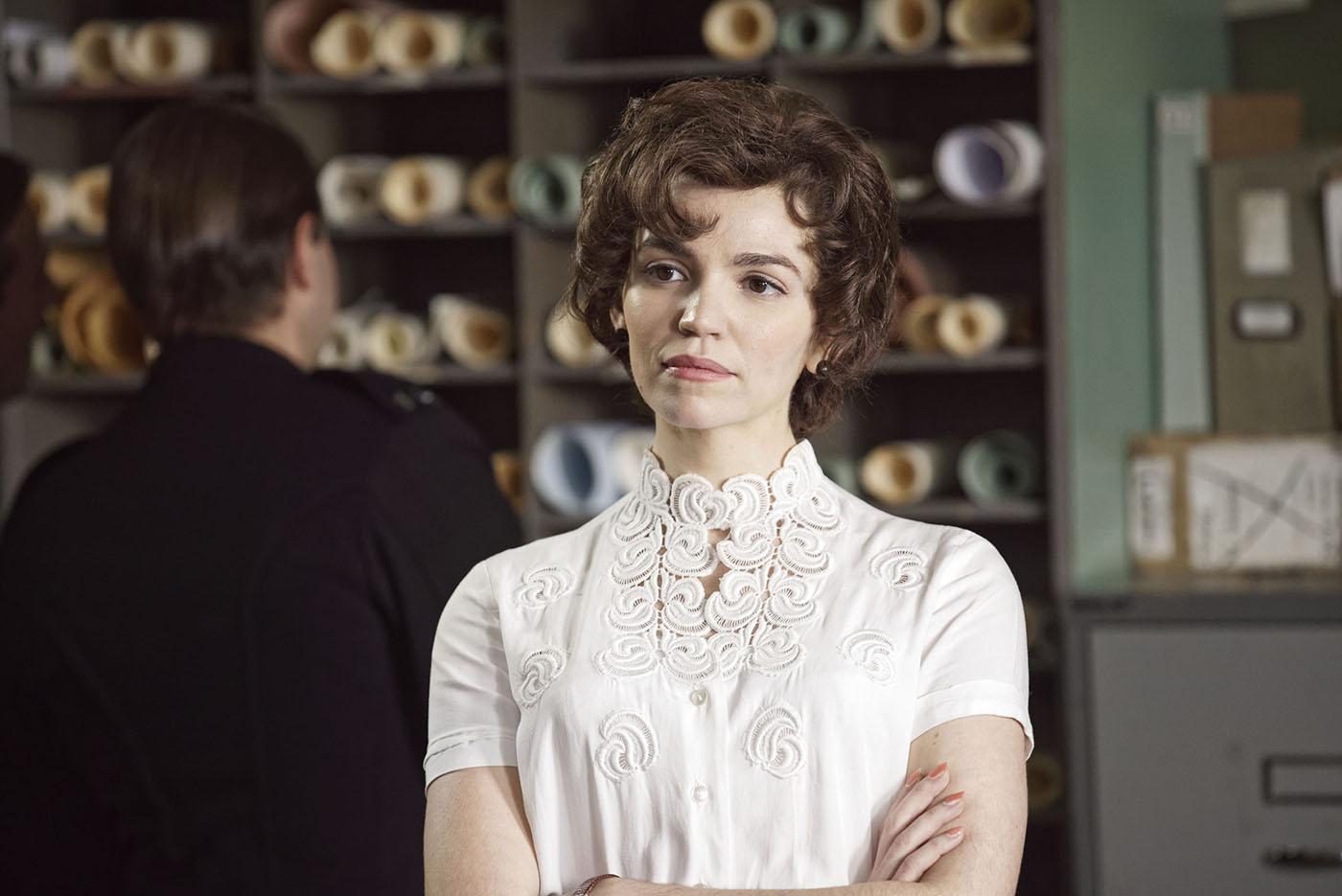 Margaret's resourcefulness is beginning to draw Geordie's attention. Photo: ITV for MASTERPIECE At the police station, the resourceful Margaret has uncovered the identity of the nurse in the photo. Her name is Ivy Franklin, and Sidney presided over her funeral after she died in bed three months ago. Curious as to whether her relationship with Dr. Atwell went beyond their shared workplace at the mental facility, Sidney and Geordie visit Ivy’s home, which she shared with her brother and niece Hilary. Hilary is guarded and solemn – her father is dying in a bed upstairs – but she does reveal that a dead crow was found in Ivy’s room: she thought it had flown in and gotten trapped.

If the connection weren’t clear enough, a man again calls Sidney and warns him that he will be the next victim. Already in a state of constant anxiety, his nerves flare when he and Geordie return to the vicarage and find the door wide open. Mrs. Maguire stands stricken in a corner while a bearish man cradles Amanda’s baby Grace. Geordie snatches away Grace and Sidney nearly strangles the man. Geordie and Mrs. Maguire rein Sidney in, and they sit the man down for questioning, having recognized him as one of the homeless people waiting for soup from Dr. Atwell on the morning of his death. 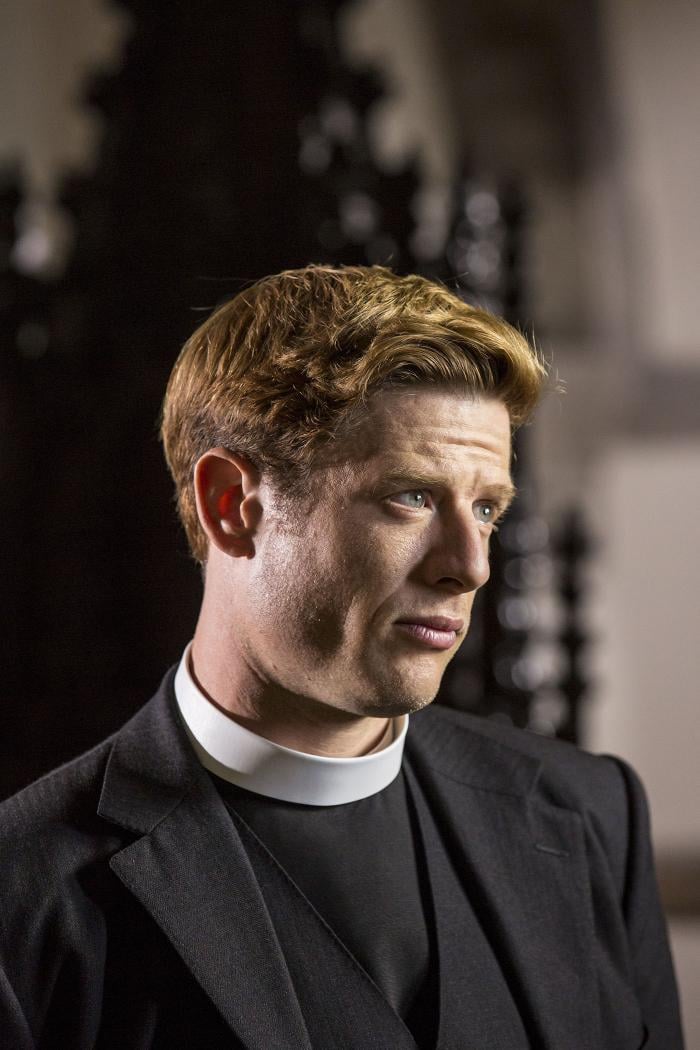 Sidney receives ominous warnings that he will be the murderer's next victim. Photo: Colin Hutton and Kudos/ITV for MASTERPIECE The man confesses that he witnessed the murder of the doctor. He was sleeping in the church when he saw a shadowy figure drown Atwell in a baptismal font, repeating “my Bonny lass” over and over as he did so.

Now questioning whether Ivy Franklin’s death was natural, the detectives exhume her body and find a creepy baby doll in the coffin. While the exhumation occurs, Leonard sits with Ivy’s niece Hilary as she nurses her father in order to keep her mind off the unsavory affair. When Leonard wakes from a nap, he spies Hilary burning a letter. Returning the next day on the pretense of comforting Hilary as her father wastes away, he rummages through her trash for the burnt fragments, but is caught.

Hilary relents in her secrecy and reveals that she took the letter from a collection plate at her aunt’s funeral. It was addressed to Sidney and revealed Ivy’s abuse of patients at the mental facility. Hilary herself had suffered cruelty at the hands of her aunt, but wanted to prevent a posthumous tarnishing of her aunt’s reputation. Sidney realizes that he is being targeted because whoever wrote the letter is enraged that he has done nothing to investigate the facility.

Having already visited the poorly maintained facility and encountered stonewalling by the director, Sidney and Geordie return to break in under cover of night. Sidney finds some names, including “Bonny,” etched on the wall behind a row of sinks in what is supposedly the tuberculosis ward, and Sidney pilfers a list of eight digit codes from a file labeled “TB.” Margaret again proves her mettle and deciphers the numbers: they reveal birth dates and initials. Whoever Bonny is, her last name starts with an “H.” 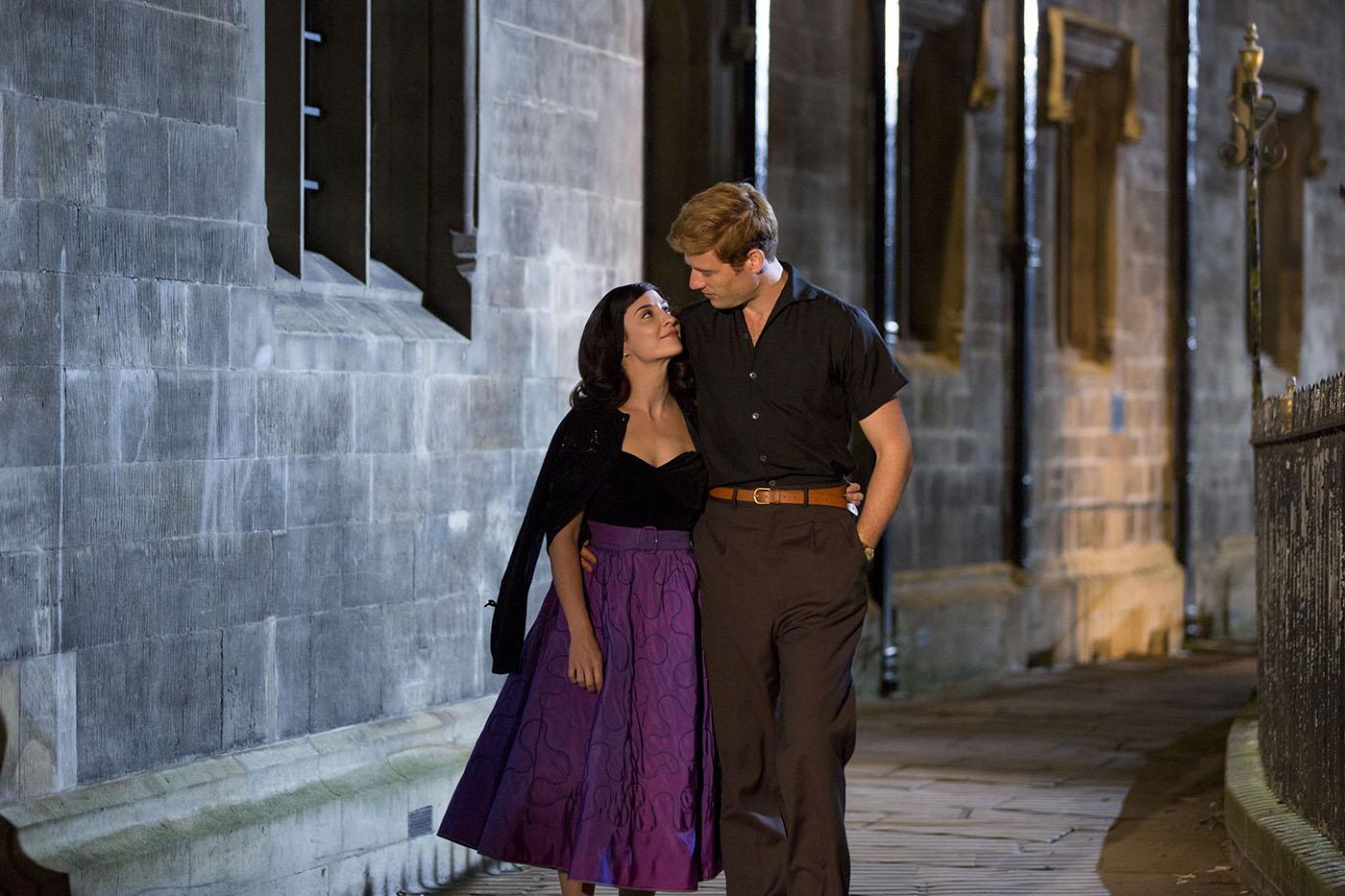 While Amanda and Sidney grow closer, Geordie and his wife Cathy grow apart. These increasingly frequent interactions between Margaret and Geordie, spiced with flirtation, are indicative of marital discontent. That conjugal strife is so obvious that even Geordie’s daughter picks up on it and runs away to the vicarage, where Geordie nearly clocks her when he hears a noise outside the window. His edginess is well-founded, however. Another phone call threatens Amanda’s baby Grace, and he rushes to where she is staying. Grace is safe, but Sidney is assaulted from behind and nearly drowned in the bathtub before Amanda saves him and the attacker escapes. Sidney did catch a glimpse, though: it was Harland, the church caretaker who discovered Dr. Atwell’s body.

Geordie has also figured out who the killer is, having visited the church and seen a bunch of crows in Harland’s quarters. The two detectives rush to the mental facility and stop Harland from murdering the director. The motive is explained: Bonny was Harland’s daughter and a patient at the facility. She was accidentally killed when a cruel punishment – thrusting her head underwater – went too far. Hence, Harland’s preferred killing method.

That case is closed, but developments in our characters’ lives complicate things. Geordie acts on his discontent and kisses Margaret – but Phil, yearning for a promotion, sees through the frosted glass and gains blackmail fodder. Leonard, subtly warned about his homosexuality by the new archdeacon, attempts to start a relationship with the bereaved Hilary, whose father has just died. And Sidney becomes even more conflicted when he and Amanda bring Grace to see her biological father, Guy, and Guy begins to sob.