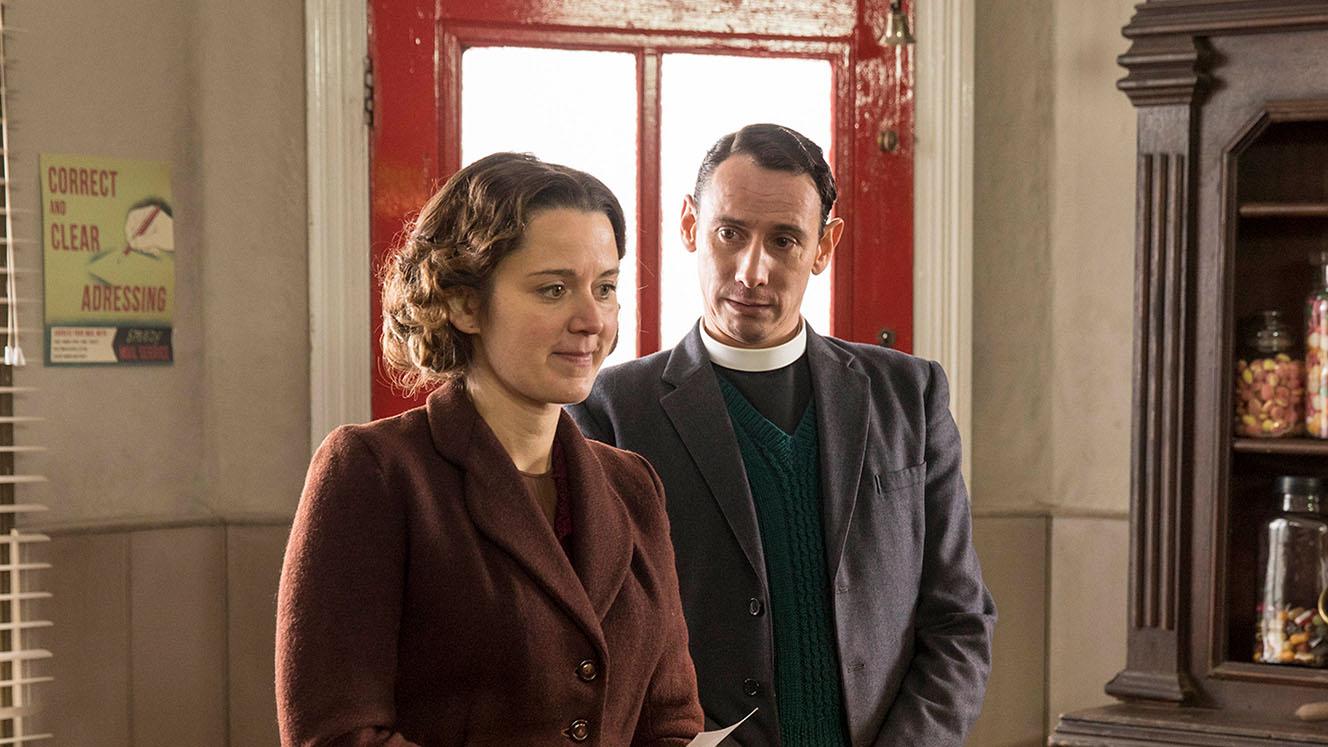 Leonard and Hilary witness a crime and Leonard becomes a hero. Photo: Colin Hutton and Kudos/ITV for MASTERPIECE

Previous episodes of Grantchester are available to stream. Recap the previous and following episodes.

Leonard is an unlikely hero, but then the robber he stands up to is an improbable villain. While Leonard and his companion Hilary are picking up a package from the post office, a person in a gas mask storms in and points a gun at Wendy Parker, the clerk behind the desk. Leonard, aware that Wendy has a heart condition, begs the gunman to stand down before she has a heart attack. The clergyman receives a slap in the face for his bravery, and the robbery is carried out.

Recovering at the police station, Leonard and Hilary recognize the robber’s mechanic uniform on a man in a book of mug shots. Walter Dunn has previously been arrested for assault and aggravated battery and is known to be armed. Geordie leads a raid on his garage, where they find Walter sitting at a desk with his back to the door. He ignores Geordie’s calls, his arm slips to his side, and the young officer Phil fires, nearly hitting Geordie. Walter is dead by gunshot, and has been for at least a day.

Walter’s wife Alice laments that the murder must be her “punishment,” although she doesn’t say for what. Abandoning that lead, Geordie and Sidney interrogate Mr. Parker, the owner of the post office and Wendy’s father. His accounting of the stolen money was 10 pounds off – he was trying to make some extra insurance money. Any suspicion that he might have been involved in the robbery is dismissed, however, when another takes place and he is shot in the arm.

This time there were two robbers. One was a woman: Parker heard her call out. Geordie suspects Alice Dunn and her supportive friend Frank, who worked at Walter’s garage. Frank has a prior arrest for robbing houses during blackouts in the Battle of Britain. Geordie discovers a bloodstained blouse at the Dunn house and arrests Alice and Frank. Alice’s alibi for the murder – that she was at church – is disproven by a priest, but Frank was at the dentist and has a receipt as evidence. 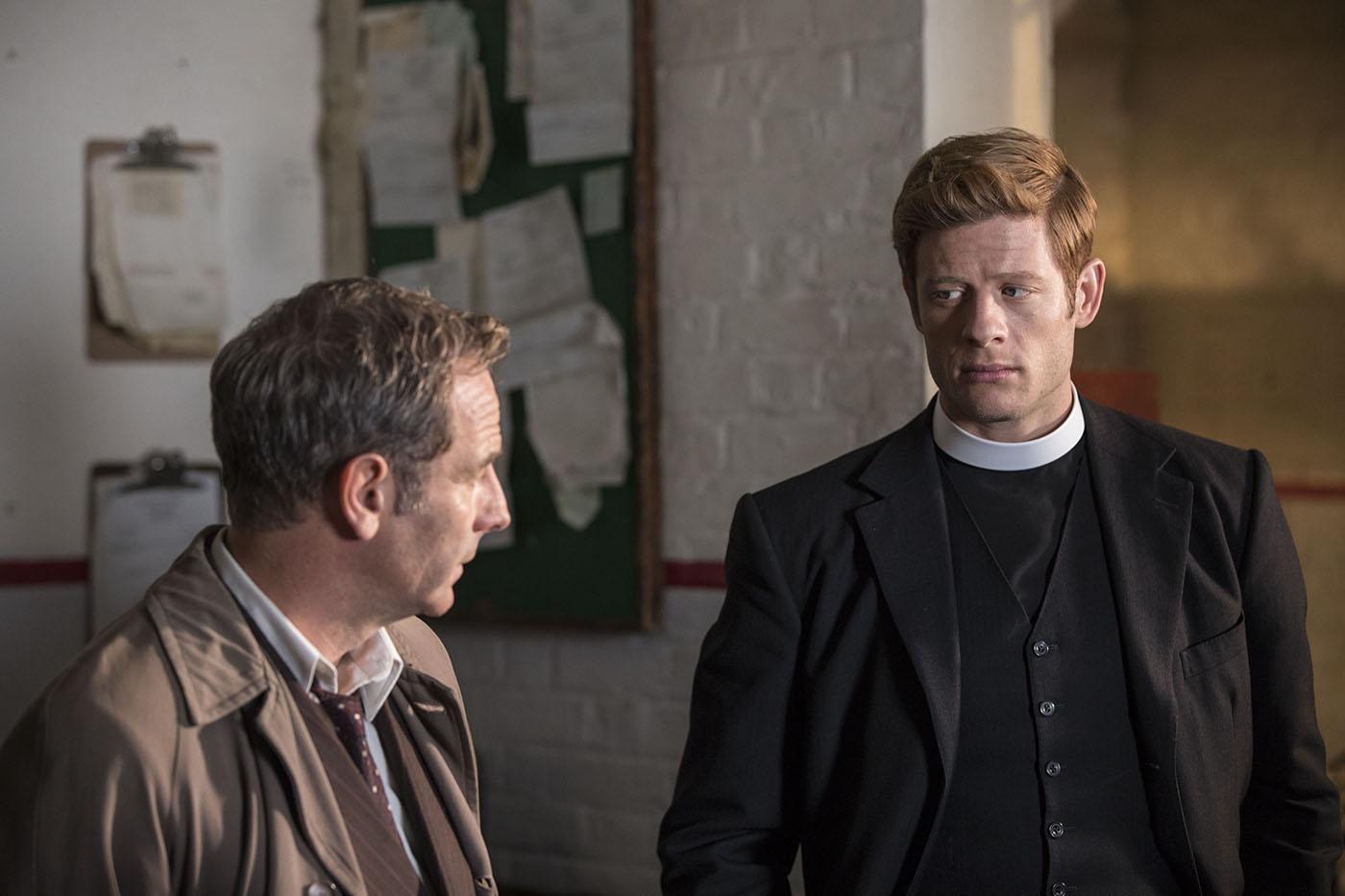 Sidney and Geordie continue to struggle with their romantic relationships. Photo: Colin Hutton and Kudos/ITV for MASTERPIECE It takes a drink at the pub to move the detectives forward in the case. Sidney has come for a pint after confronting Leonard about his courtship of Hilary. Leonard indignantly ignores Sidney’s insinuation that he is faking his affection and blames Sidney’s own low spirits for the comment. Geordie is at the pub to mull over his continuing affair with Margaret, who has begun to ask Geordie what their future is, after having a pregnancy scare. As the two friends discuss their troubles, Sidney realizes that Frank’s five pound dental bill is exorbitant. Perhaps another, more complex procedure was performed, one that Alice feels merits punishment.

Alice confesses that she had an abortion, and that Frank accompanied her. Walter was an abusive alcoholic, and she feared his child would turn out the same. The abortion appointment places both Alice and Frank out of town at the time of Walter’s murder. Alice and Frank point the detectives towards Martha, Walter’s secretary. They believe he tried to rape her and that the bloodstained blouse may be hers.

The police predict the location of the next robbery and ambush Wendy and Martha. In jail, they admit that they were dear friends who dreamed of running away together. Wendy admits that she was stifled by her father’s concern over her heart condition. Martha confesses that she shot Walter: he sexually assaulted her nearly every day, and she finally defended herself with his gun. Wendy helped her frame Alice by planting the blouse, and hatched the robbery scheme in order to raise money to flee to France.

Leonard also decides to flee, from the dangers of his sexuality, and proposes to Hilary. Sidney, depressed by his separation from Amanda and by Guy’s increasing involvement in baby Grace’s life, runs back to Amanda. The erstwhile lovers finally have sex. And Geordie continues to sleep with Margaret, a precarious situation, given that Phil knows about the affair and is nursing a larger and larger grudge against his boss.