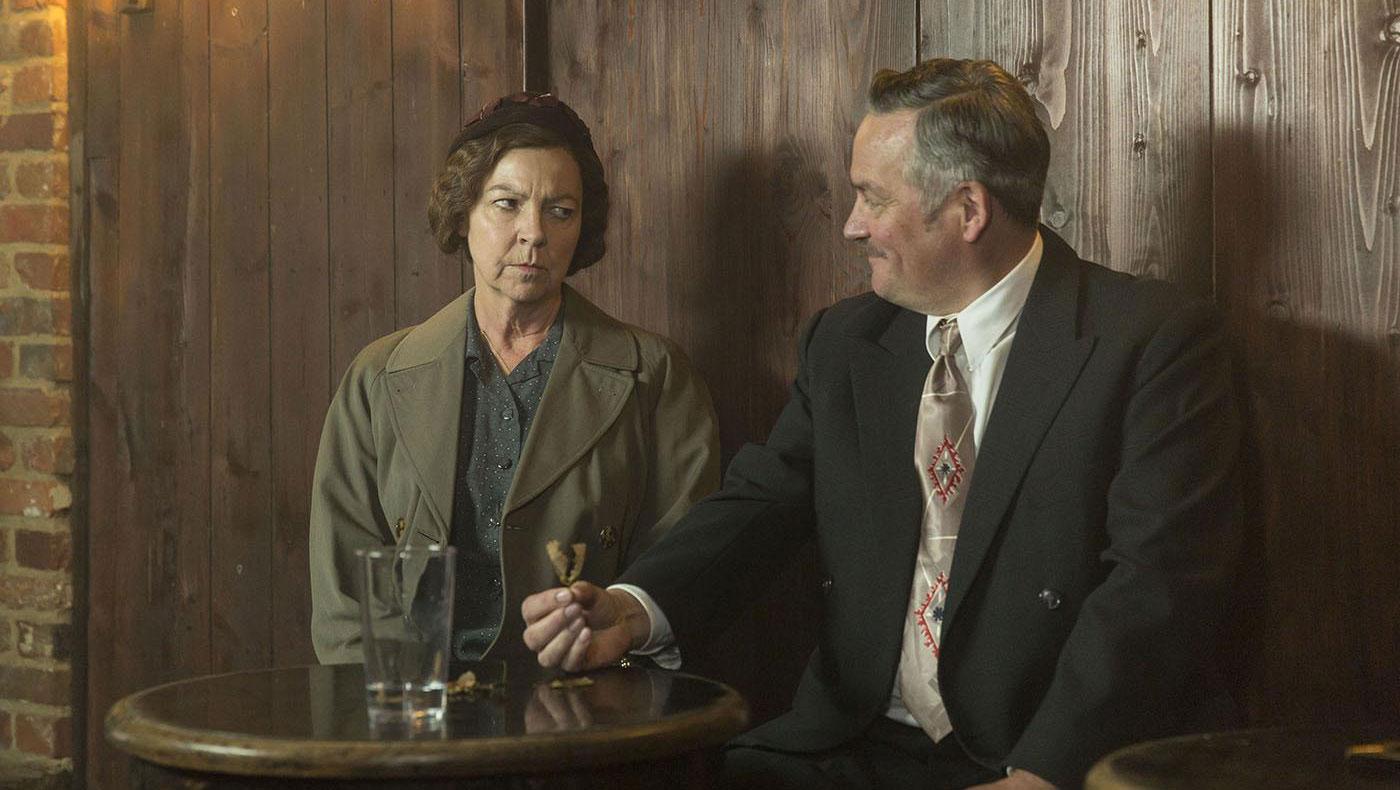 An unexpected figure appears out of Mrs. Maguire's past. Photo: Colin Hutton and Kudos/ITV for MASTERPIECE

Previous episodes of Grantchester are available to stream. Read our recaps of the previous and following episodes.

The day of reckoning is at hand. Every main character is thrust into a confrontation with their past actions; terrible payment is exacted from each.

Before the storm there is joy, if not calm. Sidney and Amanda are ebullient as they continue to sleep together. Geordie has found new passion through his affair with Margaret, enough to buy her a dazzling necklace. Hilary is flush with excitement about her approaching marriage to Leonard. But all three men also struggle with doubt: Leonard, about his denial of his sexuality; Geordie, in his deception of Cathy and his daughters; Sidney, with his vow of chastity. 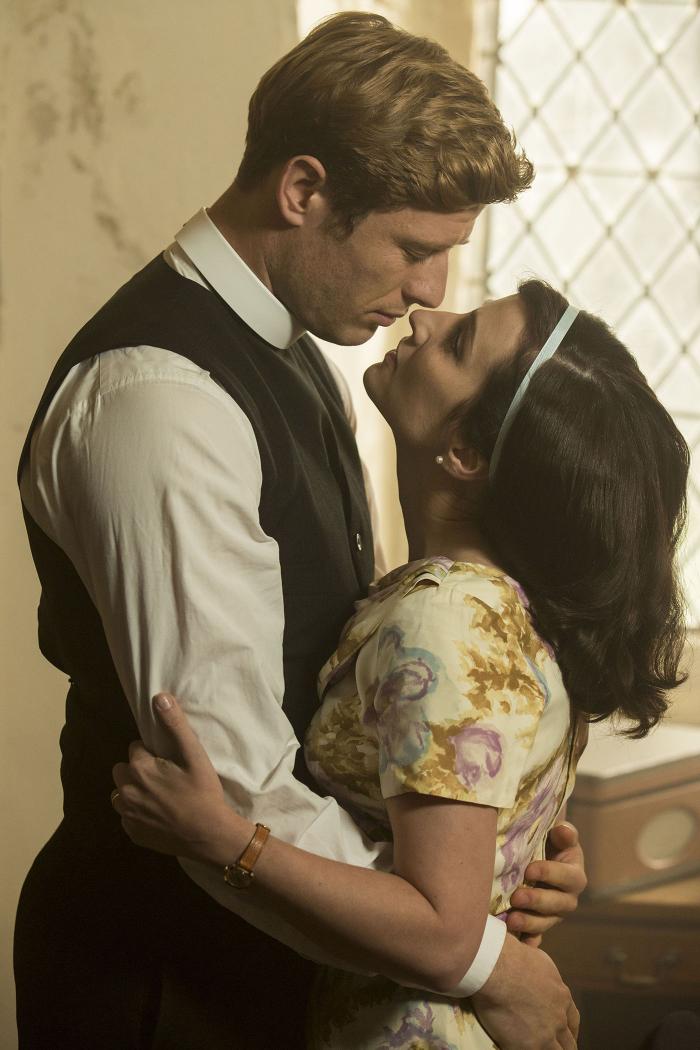 Though he enjoys doing it, Sidney is wracked by doubt over breaking his vow of chastity. Photo: Colin Hutton and Kudos/ITV for MASTERPIECE There is a mystery to distract Sidney and Geordie from their consciences. Jo Sutton seems to have fallen to her death in a warehouse at the Garston manufacturing firm, where she worked. The night watchman, Ricky, found her on his early morning rounds. But when Geordie crouches to look at her watch, she stirs. Barely alive, she dies at the hospital within the day. The watch does reveal an inconsistency: it broke at 11:47, but Ricky says she wasn’t there on his midnight round. Either he’s lying or she was moved.

It seems like the former. Sidney and Geordie learn from Jo’s mother Maud that Ricky is the father of Jo’s son, but that Jo left him to live with her mother after he beat her. Yet the autopsy reveals pieces of gravel embedded in Jo’s arms: she seems to have been thrown onto a road from a vehicle, so maybe the fall was staged. She had also recently had sex.

Maud reluctantly shares that Jo had been going on dates with a man from the Garston factory. He would pick her up on a motorbike, including on the night she died. The only man at the factory with a motorbike is Gideon Garston, the son of the owner. But when Maud is brought in to identify Jo’s boyfriend, she nervously chooses a random worker. Geordie doesn’t believe it for an instant.

Nor does anyone believe in the reformation of Mrs. Maguire’s husband Ronnie, who disappeared “for no good reason” during World War II and has suddenly showed up again. But he’s an engaging, convincing person. He says he’s dying of cancer, and explains to Sidney that he never returned because he thought everyone was better off without him. Sidney in turn encourages Mrs. Maguire to meet with Ronnie, despite her partner Jack’s concerned opposition and her own wariness.

The estranged couple’s meeting turns into a nostalgic sharing of memories and they move from the pub to Mrs. Maguire’s house. While the two converse in front of a fire, Geordie, Cathy, Sidney, and Amanda put on their finest for a police charity ball. 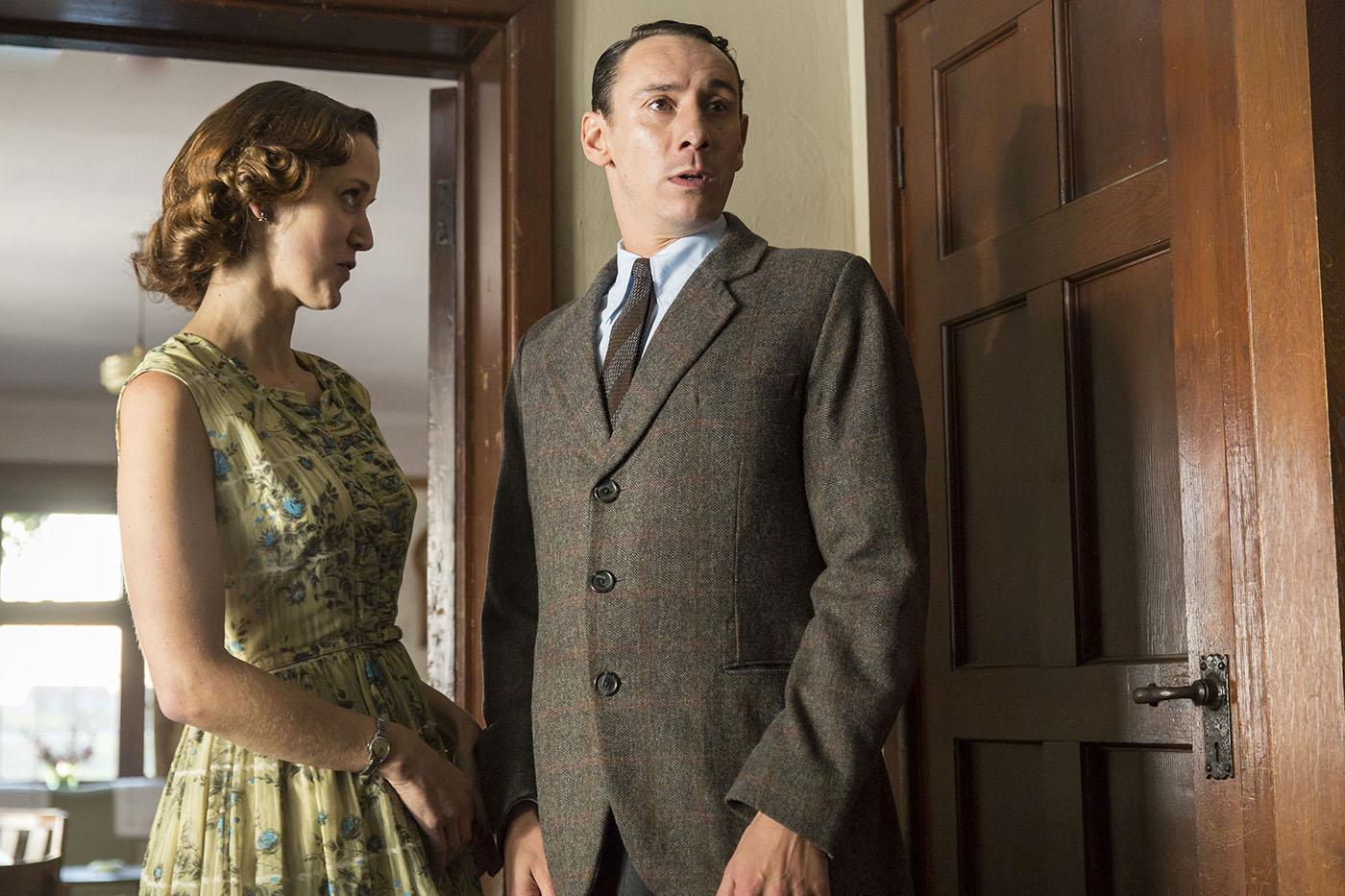 Hilary and Leonard will soon be married, but the appearance of an old friend puts Leonard on edge. Photo: Colin Hutton and Kudos/ITV for MASTERPIECE Leonard and Hilary are babysitting Cathy and Geordie’s daughters. Hilary may enjoy playing at being parents, but Leonard is on edge. The couple just took engagement photos, and Hilary booked Daniel Marlowe, Leonard’s former lover, to shoot them. Leonard pretended he had never met Daniel. After sending the children to bed, Hilary broaches the subject of sex and Leonard snaps. She asks if he truly wants to be with her, and he can’t bring himself to say yes. She abandons her engagement ring and runs off.

Back at the ball, Phil is promoted to sergeant, despite Geordie’s recommendation to the superintendent that Phil still needs a few years of experience. When Phil and the superintendent shake hands, Geordie spots a Mason ring on both of their fingers and realizes that Phil must have dissuaded Maud from identifying Gideon Garston as Jo’s boyfriend. The Garstons are also Masons, which explains why the superintendent warned Geordie from prying too much into the case.

Geordie calls Phil a disgrace and goes with Sidney to get a proper identification from Maud. She confirms that Jo’s boyfriend was Gideon, and Geordie arrests him. Phil retaliates by telling Cathy about Geordie’s affair. Geordie and Sidney return, Amanda tells them what happened, Geordie punches Phil, and they all leave. 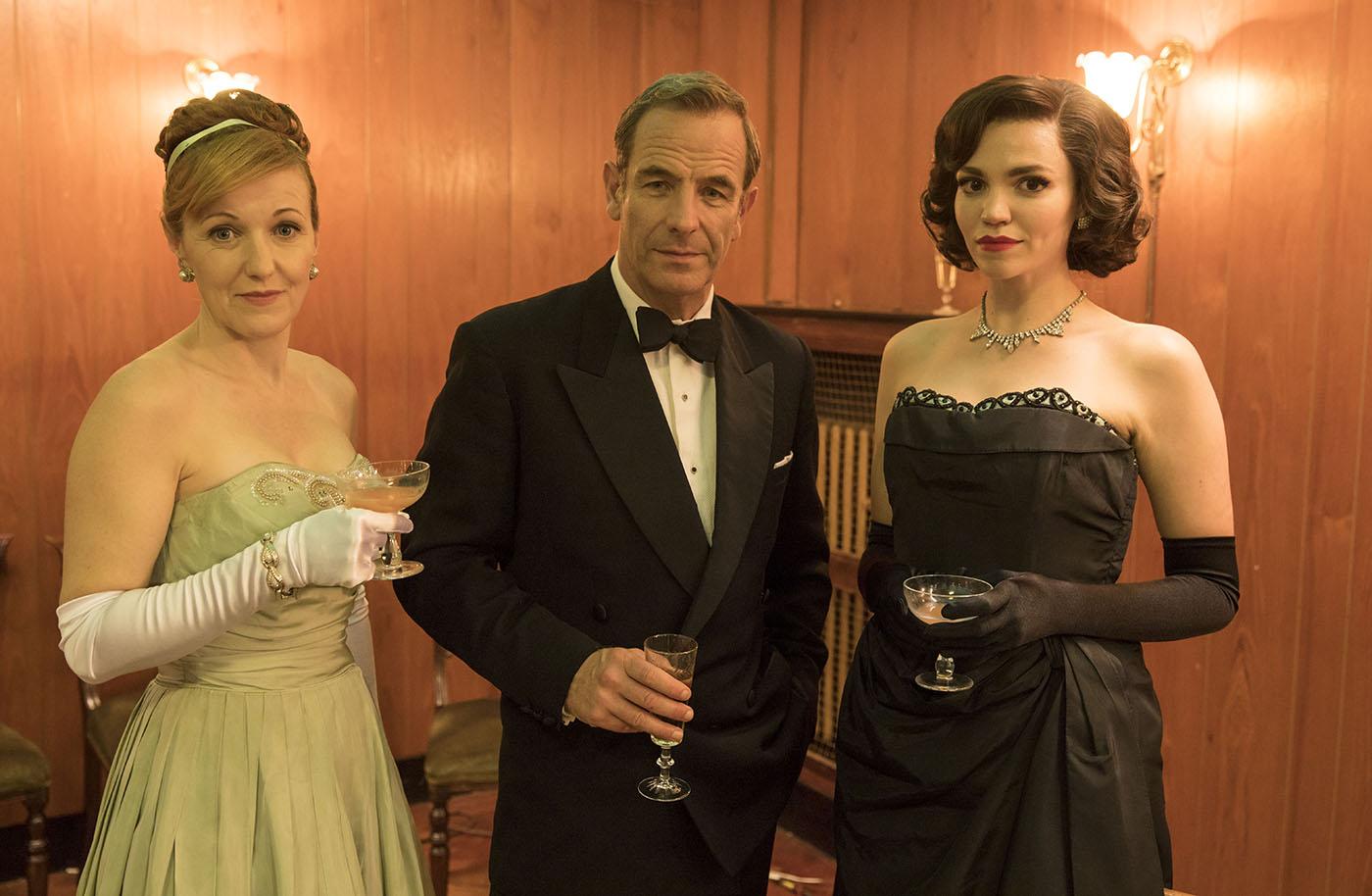 Geordie's affair comes to a head at the police ball. Photo: Colin Hutton and Kudos/ITV for MASTERPIECE Amanda accuses Sidney of hypocrisy for covering up Geordie’s affair. Mrs. Maguire nearly falls under Ronnie’s spell and sends him away, but not before he steals her savings and the locket that he gave her years ago. Leonard tries to slit his wrists but can’t go completely through with it, so that Sidney returns to the vicarage to find him sobbing and bleeding by the sink.

Although the superintendent released Gideon from jail, Phil offers Geordie damning evidence in repentance: Gideon’s motorbike license and the information that Gideon left the Mason lodge with a ring for Jo the night she died. Sidney and Geordie find Gideon’s bike hidden in the woods with a scrap of Jo’s scarf caught in the wheel. Jo fell off Gideon’s bike, he panicked, and he and his father hid the bike and staged her fall. The discovery of the ring in the elder Garston’s desk incriminates him. Knowing that the Masons will prevent charges being filed against either Garston, Sidney and Geordie extract a promise that the Garstons will pay for Jo’s son’s upbringing, or else the public will find out what they did.

Reeling from Leonard’s attempted suicide and Mrs. Maguire’s refusal to break her “vow before God” by divorcing Ronnie in spite of his theft, Sidney confronts the archdeacon with the hypocrisy of the church: it judges people by an impossible moral standard, causing them shame and misery when they fail to adhere to perfection. The archdeacon indignantly sends Sidney away to pray. Sidney removes his vestments, leaves a letter for Leonard, and flees Grantchester.