Behind the Scenes with Geoffrey Baer 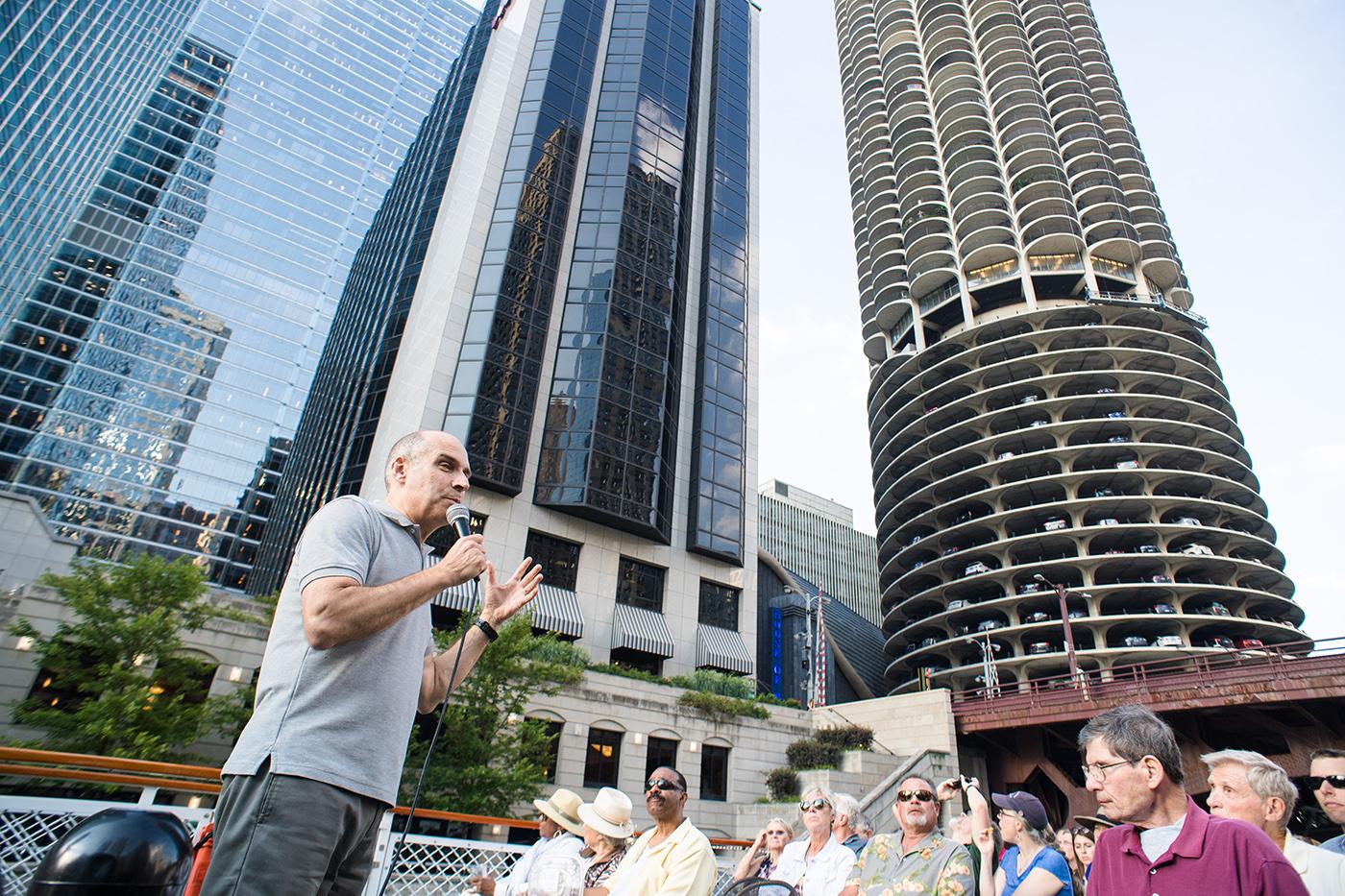 Ever wondered how a PBS special gets made? It’s more painstaking than you may realize. Hours of work might yield only a few minutes of material included in the final program. Take filming for The Chicago River Tour with Geoffrey Baer, scheduled to air in late November. In it, Geoffrey explores the branches and canals of Chicago’s iconic waterway in vessels ranging from a kayak to a tugboat, hitting sites from Deerfield in the north down to Lyons in the southwest.

One leg of the journey features Geoffrey leading an architectural boat tour downtown. (His on-air career began when the chairman of WTTW’s board took a Chicago Architecture Foundation tour with Geoffrey as docent in 1995, and, upon discovering that Geoffrey was a producer at the station, recommended that he create a river tour for broadcast. After more than 20 years, The Chicago River Tour with Geoffrey Baer is an all-new version of that program that captures the many changes along the river since 1995.) To film this stretch, Geoffrey set off one cloudy morning on Chicago’s First Lady with volunteer audience, a three-person boat crew, and a television crew. 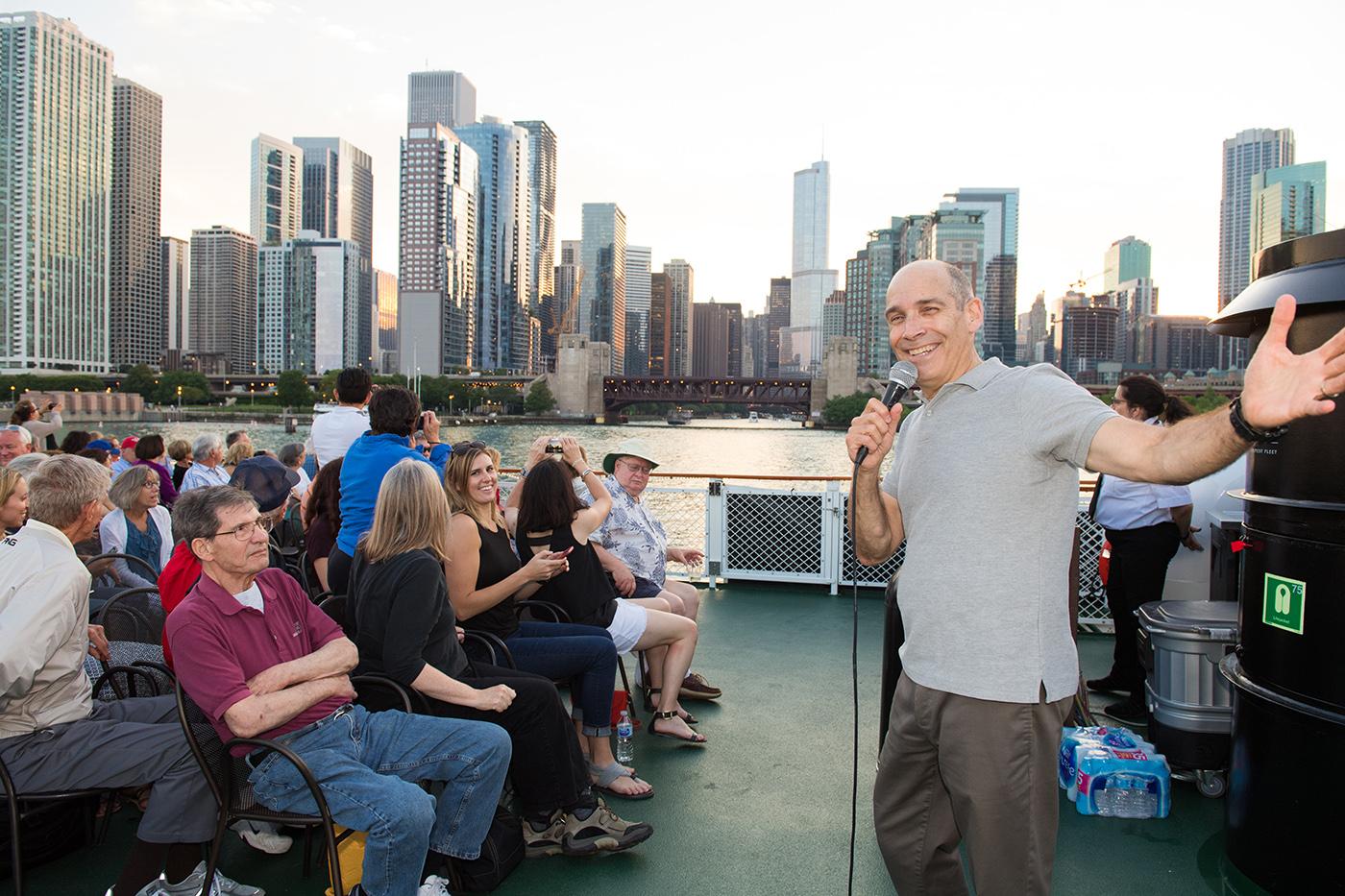 Photo: Ken Carl Before the audience boarded, the TV crew had already rigged the boat for filming. Two cameras stood at attention. A folding table in the rear served as a makeshift control room, holding video monitors and an audio board. Communication between producer Eddie Griffin at the back of the boat and Geoffrey at the front was enabled by a microphone and small speaker. A handheld mic awaited Geoffrey himself, while another microphone near the center of the vessel was staged to pick up the audience. Associate producer Erica Gunderson carried a walkie-talkie to radio directions to the captain of the ship. Scripts laid close at hand for reference, with lines tagged by the locations they mentioned.

On the boat’s first trip down to Roosevelt Road and back to the dock near the Columbus Drive bridge, Geoffrey hosted a relatively standard tour. As he pointed out buildings that would be featured in the program and spiked his narrations with fun facts and outrageous stories, one camera in the front of the boat filmed the audience head-on while another in the rear filmed Geoffrey. 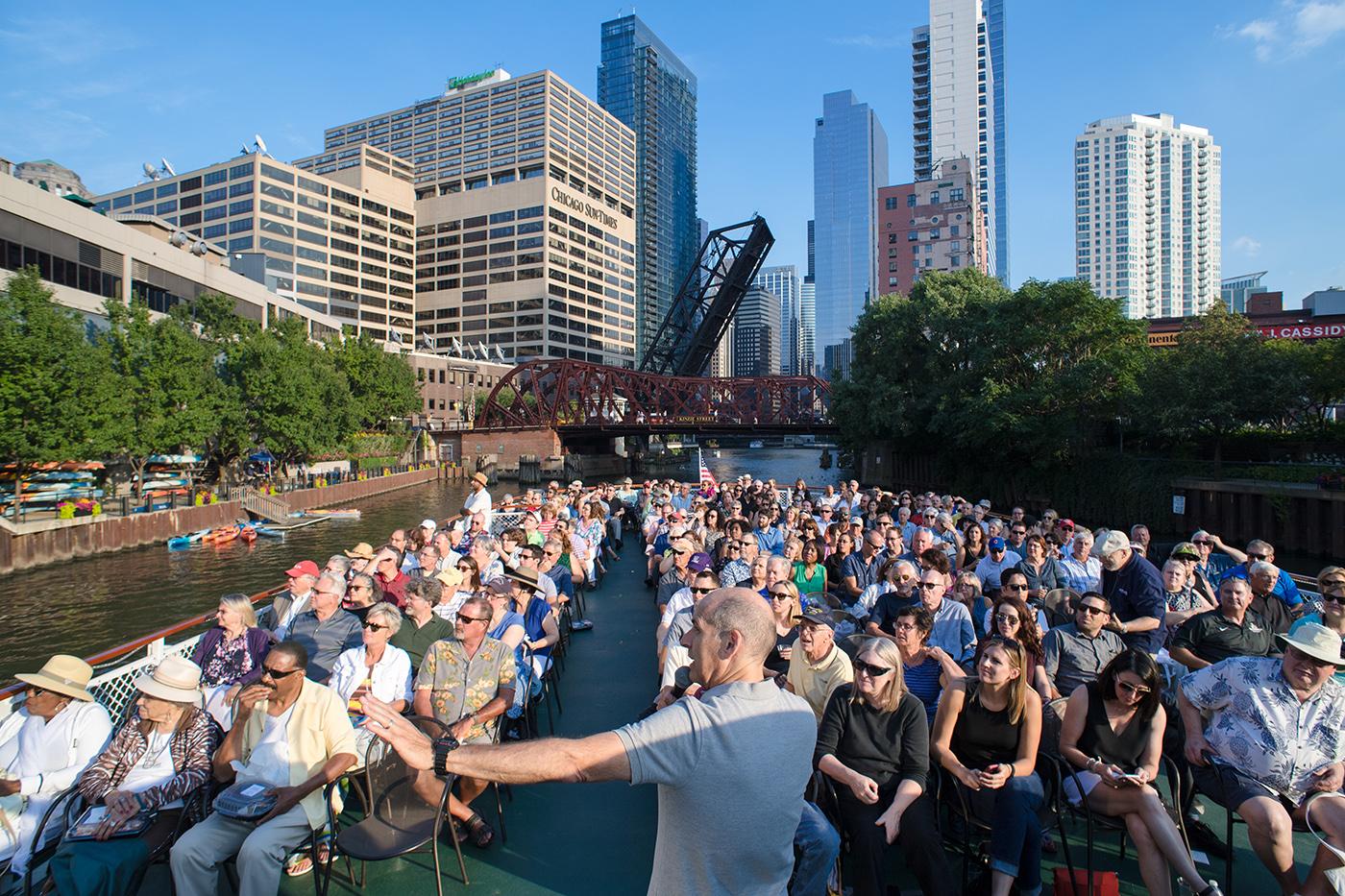 Photo: Ken Carl The second and third voyages were less linear. Both cameras moved to the back of the boat to capture Geoffrey over the heads of the audience as he delivered lines from the script. He repeated each line multiple times, offering varied deliveries for Griffin and Gunderson to choose from when piecing together the program. If the boat passed a location before a successful take was recorded, the captain backed up to try again. Low cruising speeds gave Geoffrey more time to get through the script, but river traffic sometimes prevented a leisurely pace, forcing him to quickly ace it.

In between takes, as the boat sped to the next location, Geoffrey donned sunglasses and put up an umbrella. “Follically challenged,” in his words, he wanted to protect his dome from sunburn. He’s learned to be careful when working outdoors since he starred in his first river tour, in 1995: back then, on his first day of filming, he sunburned his corneas from overexposure to light and ended up in the emergency room.

The umbrella proved handy as a prop later in the tour, when Geoffrey used it for an improvised gag. Ever the entertainer, he cracked jokes and related anecdotes in between takes to keep the audience’s energy up during the repetitive journey. (He has studied improvisation at Second City.) Those narrations also made for a disjointed tour, as they were only a small part of the script: voice-overs recorded later would fill in the rest. 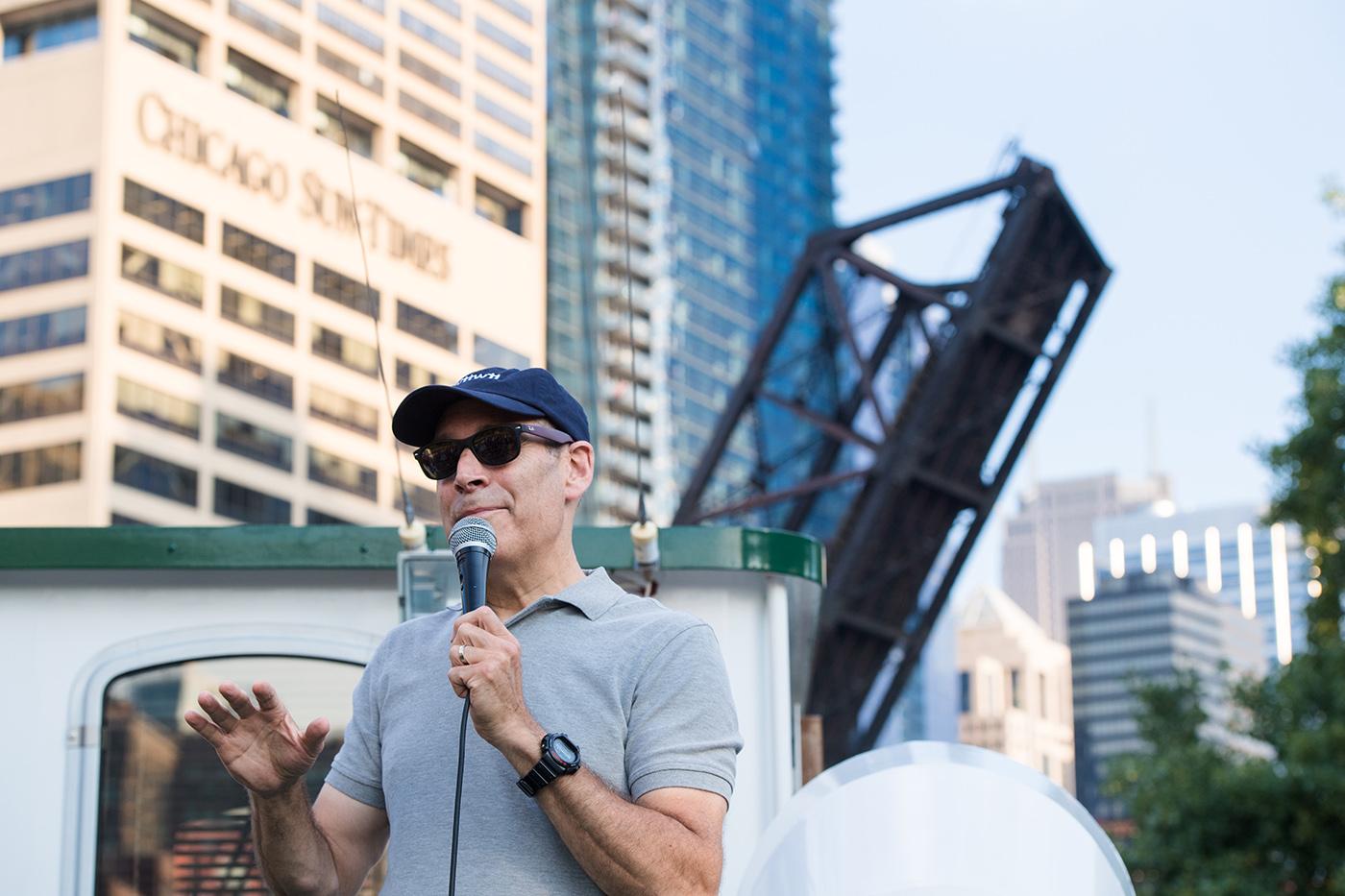 Photo: Ken Carl Certain lines required precise timing: referencing the old Sears Catalog just as Willis Tower came into view; nailing a line about Lake Shore Drive as the boat passed from shadow to sun underneath the Drive’s bridge. Longer sections of the script proved tricky or tongue-twisting, necessitating multiple attempts at delivery. And at times Geoffrey’s narration had to be quickly slipped in between sharp bursts of background noise – traffic, a jackhammer – that overwhelmed the mics.

More than five hours after setting off, the crew had finally gathered all the footage it needed, and the generous audience had endured the long day with high spirits. The crew would return later, without Geoffrey, to capture more shots of the sights along the river. All of that, for just a portion – albeit an important one – of the entire program. 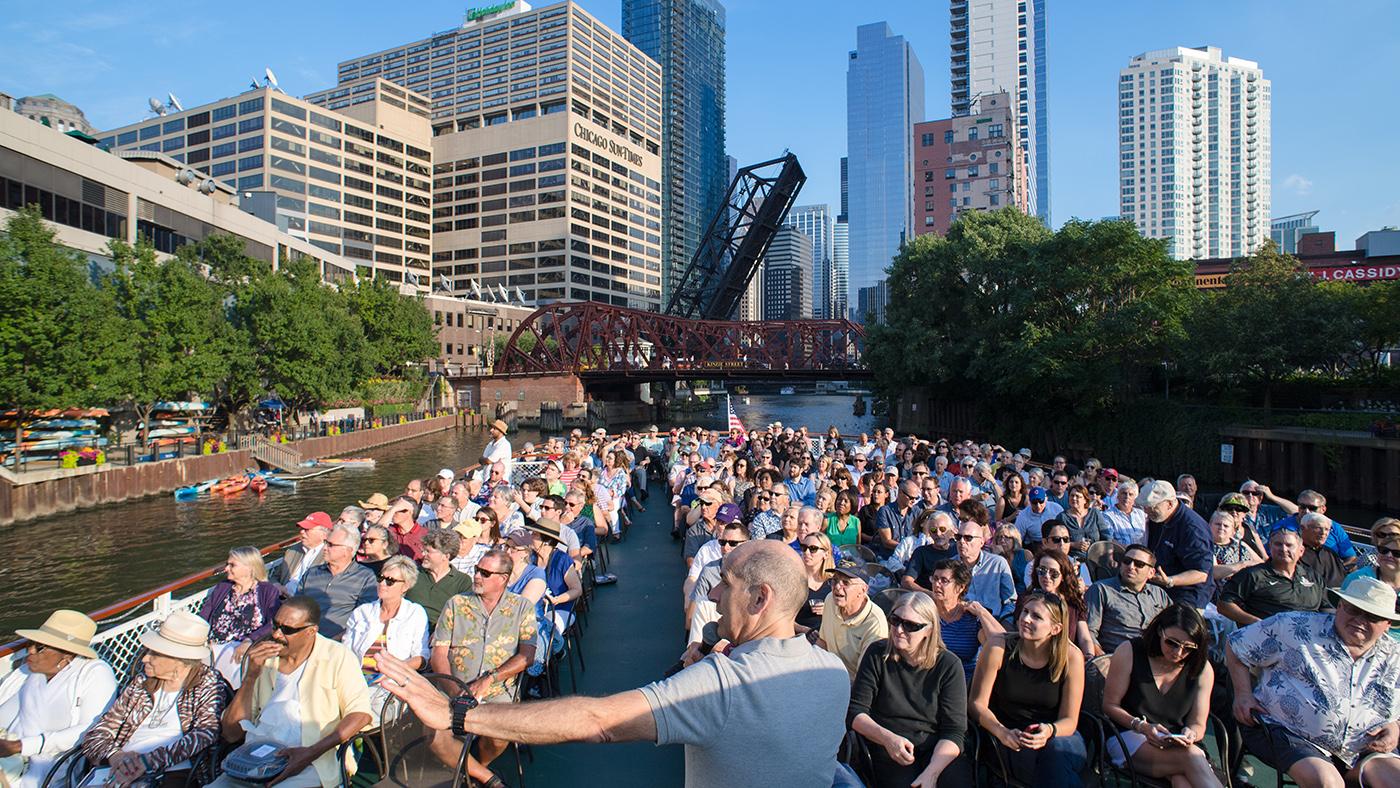 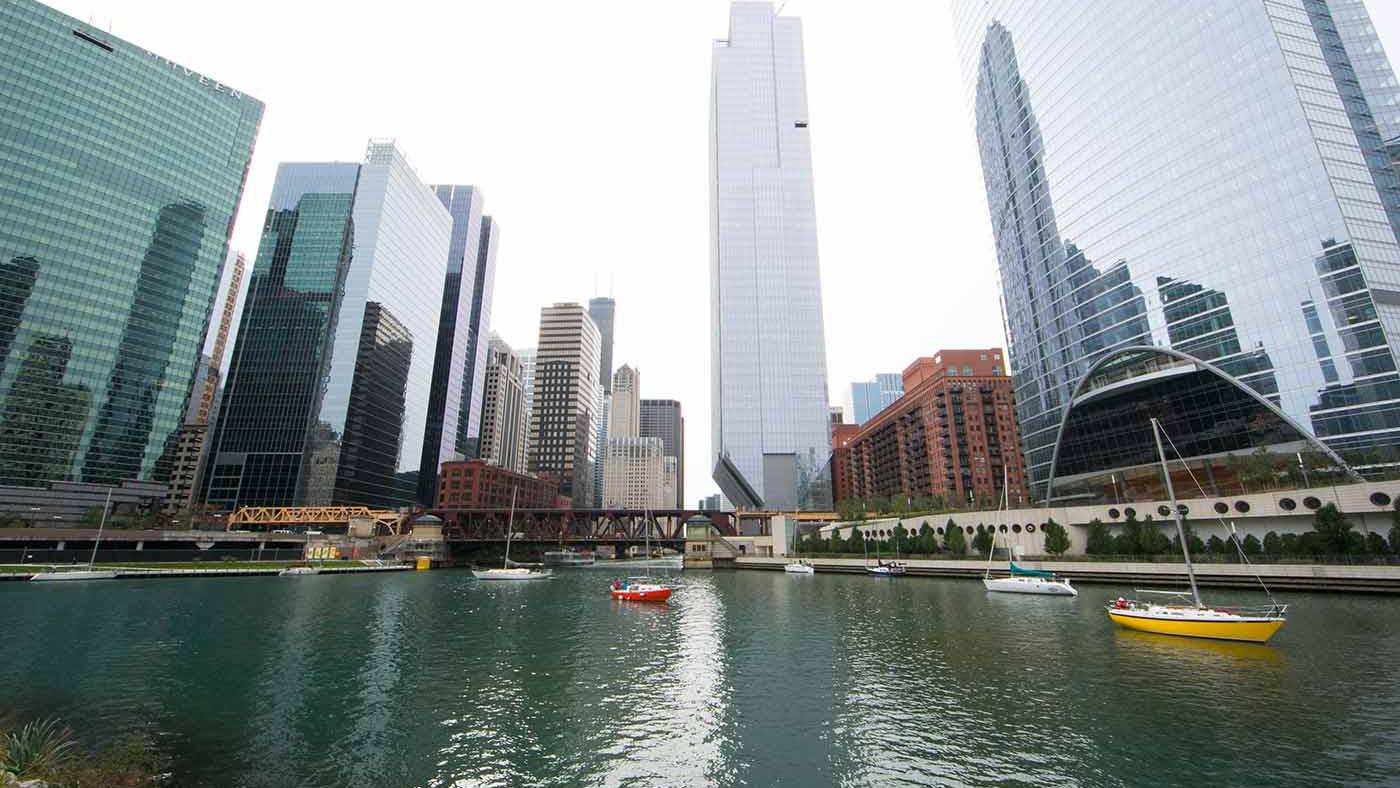 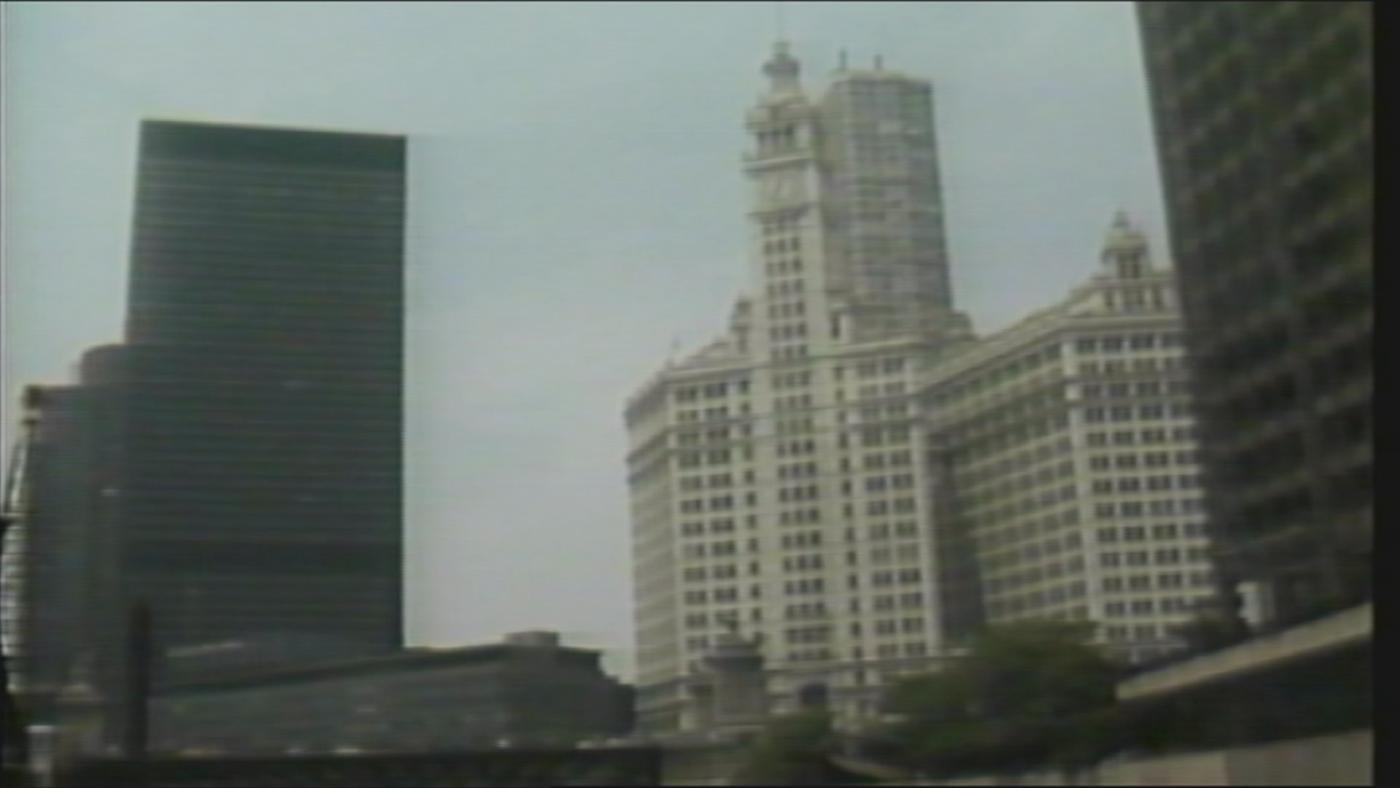 From the Archive: The Chicago River 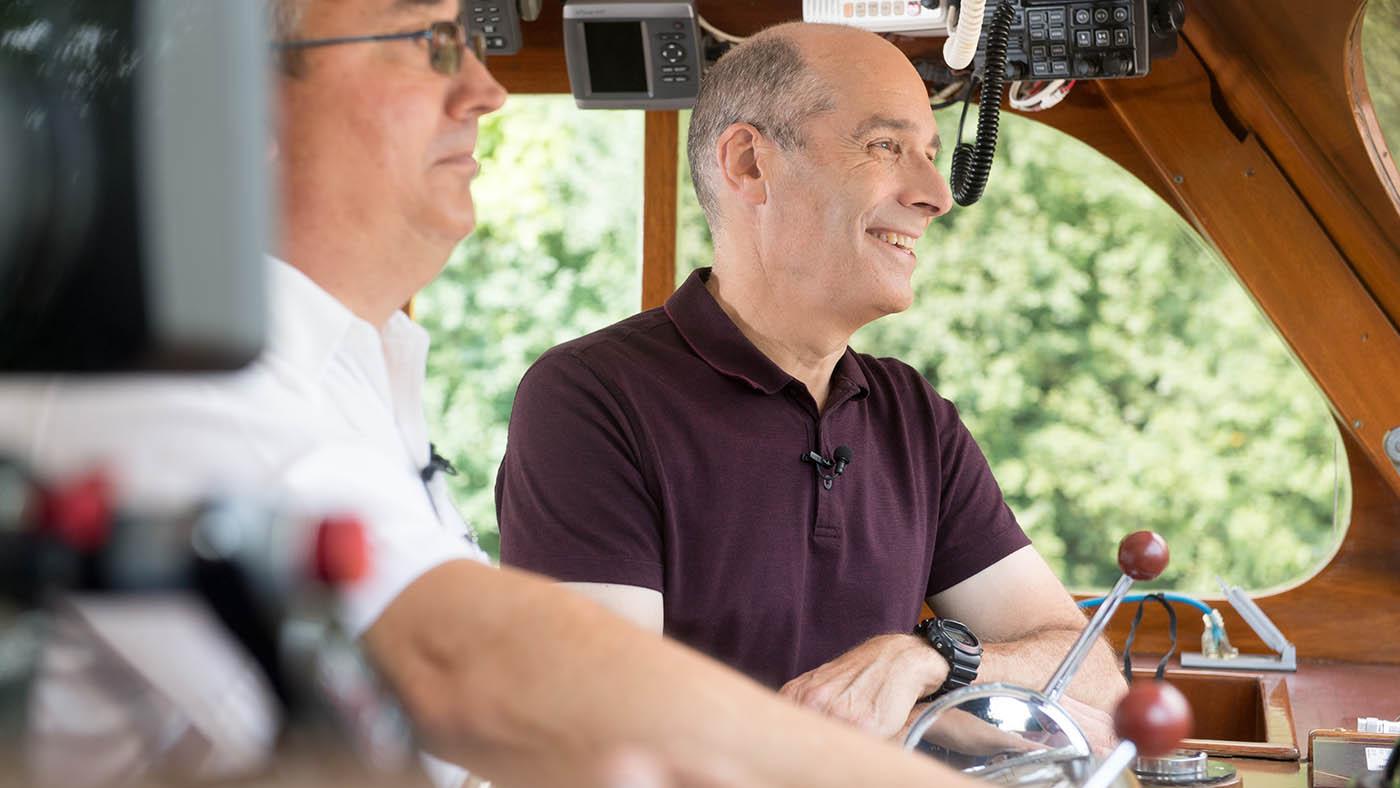