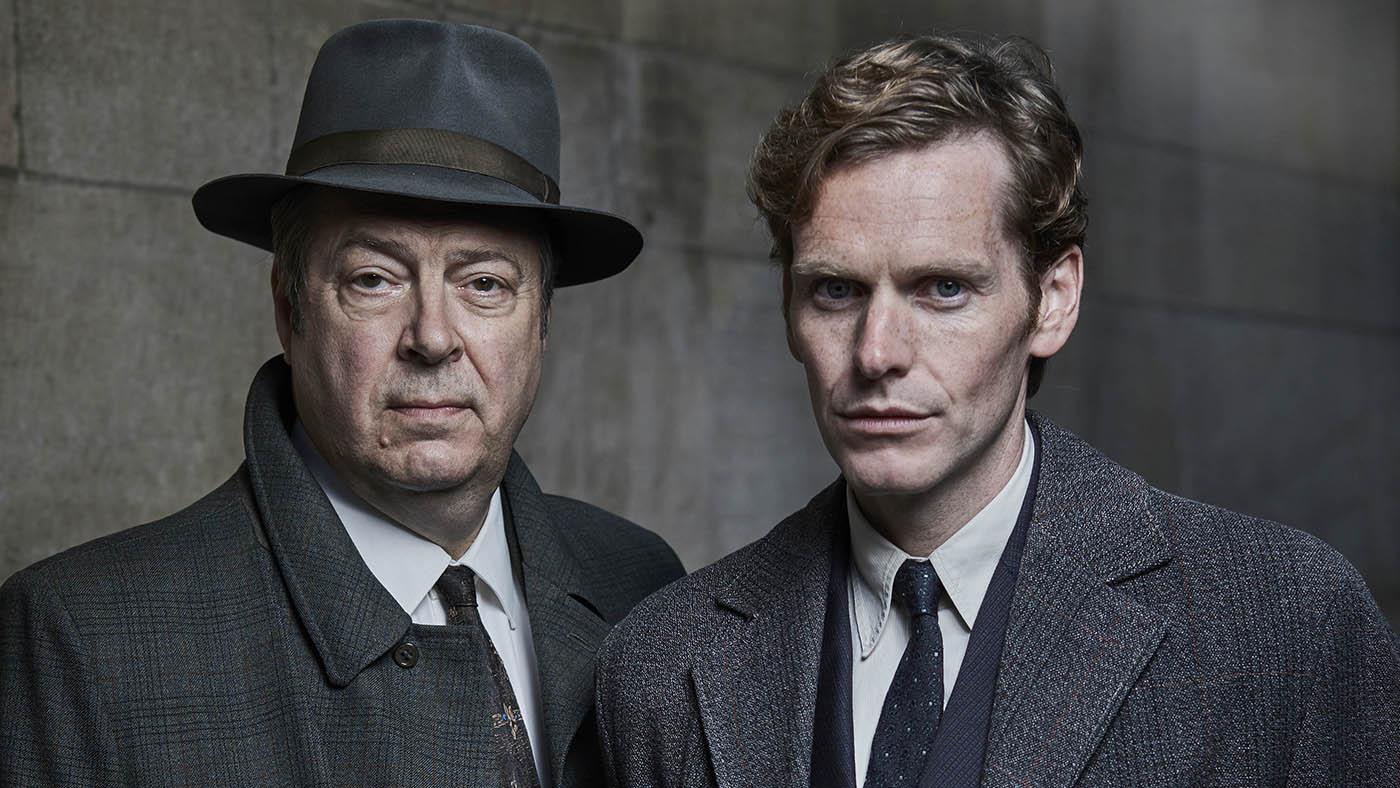 Endeavour airs Sundays at 8:00 pm and is available to stream. Read our recaps of the following episode and other seasons.

The Oxford City Police Department is plagued by disappearances. In the wake of the traumatic robbery of her workplace, Joan Thursday has left Oxford, with no word of her plans. Morse failed his sergeant’s exam, not of his own fault, but because his exam papers were lost. And a researcher at Lovelace College has been missing for a month: Professor Nielsen was on a team developing an advanced computer that will be soon be put to the test in a chess match against a Russian master.

Since Morse knows a bit of Russian, he’s been assigned to monitor the match: Cold War tensions make any Russian visitor suspicious. WPC Trewlove also proves helpful, having an extensive knowledge of chess and its arcane strategies. The chess match being a newsworthy and zeitgeisty event, two representatives of the Oxford Mail are there: the editor, Dorothea, and an ambitious young reporter, Tessa Knight. Dorothea takes advantage of a break in the match to introduce Morse to her mystery writer friend Kent Finn, who’s interested in gathering material for his next book. But the conversation is cut short when Morse and Trewlove are called away to the county baths, where another person has been found dead.

Another? The baths has already had one drowning this week, when a Ms. Palfrey was found dead in a tub at the baths. When Morse investigated the scene, he found the word “Denial” written in steam on the mirror across from the tub. Nor was Palfrey the latest drowning in Oxford. Professor Nielsen’s body has just shown up in the river. He had some fishing equipment with him, including an obscure type of fly knot used for salmon, even though the fish can’t be found in Oxford. The knot’s colloquial name is the “vicar’s bitch.”

Morse and Trewlove arrive at the baths to find Thursday with another victim. Edison Daniels was a pump station worker, and was found floating in the pool. When the inspectors try his locker key, they are led through a series of lockers, each with another key. The final locker contains only empty envelopes. Trewlove recognizes the sequence of locker numbers as a chess move, and Morse recalls that Palfrey had a chess board in her home – are the murders connected to the computer chess match? 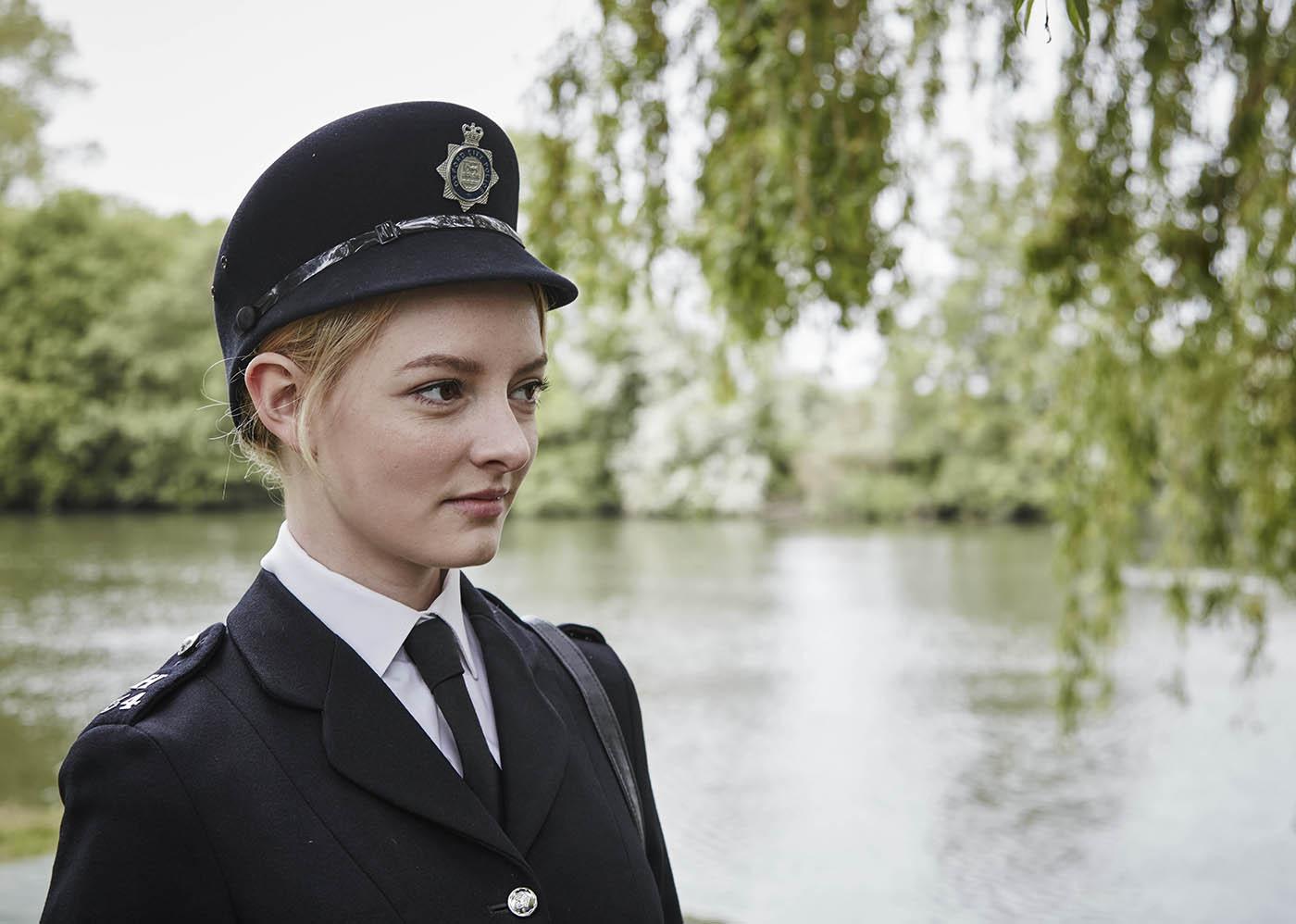 WPC Trewlove is essential to the case, with her knowledge of chess. Photo: ITV Plc and Masterpiece There are more oddities about Edison’s death. Both he and Palfrey had traces of plaster on their faces. There’s no chlorine in his system, so he wasn’t drowned in the pool. His parents say he couldn’t swim. And the baths were closed at his time of death. Trying to understand these inconsistencies, Morse discovers a path to the outside through the pool’s boiler room. Someone brought Edison’s body in through there and left it in the pool.

Meanwhile, the computer has beaten the Russian in chess. At the celebratory cocktail party, Gradenko, the Russian chess master, reveals to Morse that he and Nielsen were pen pals and that Nielsen’s last letter spoke of boiling tension amongst the group programming the chess computer. Tessa sidles up to Morse next, offering a mutual exchange of information. In return for an admission from Morse that Edison’s death is being investigated as a murder, Tessa offers a piece of gossip about Palfrey: some years ago, she worked for a doctor named Ashton or Asbury out in Binsey, and she may have had an affair with him.

From the cocktail party Morse goes to Kent Finn’s house to continue their conversation, and Finn sleazily brags that he’s sleeping with Dorothea. Dorothea herself is drawn back into Morse’s attention when the Mail publishes a story on the deaths of Nielsen, Palfrey, and Edison revealing that the police are investigating them as the work of a serial killer. Thursday and Morse furiously accuse the Mail of ruining their investigation, and realize that Tessa must have pickpocketed Morse’s notebook; it’s the only way she could have gotten those details. Dorothea in turn confronts Tessa, who resigns – she’s off for bigger, better things than a provincial paper. 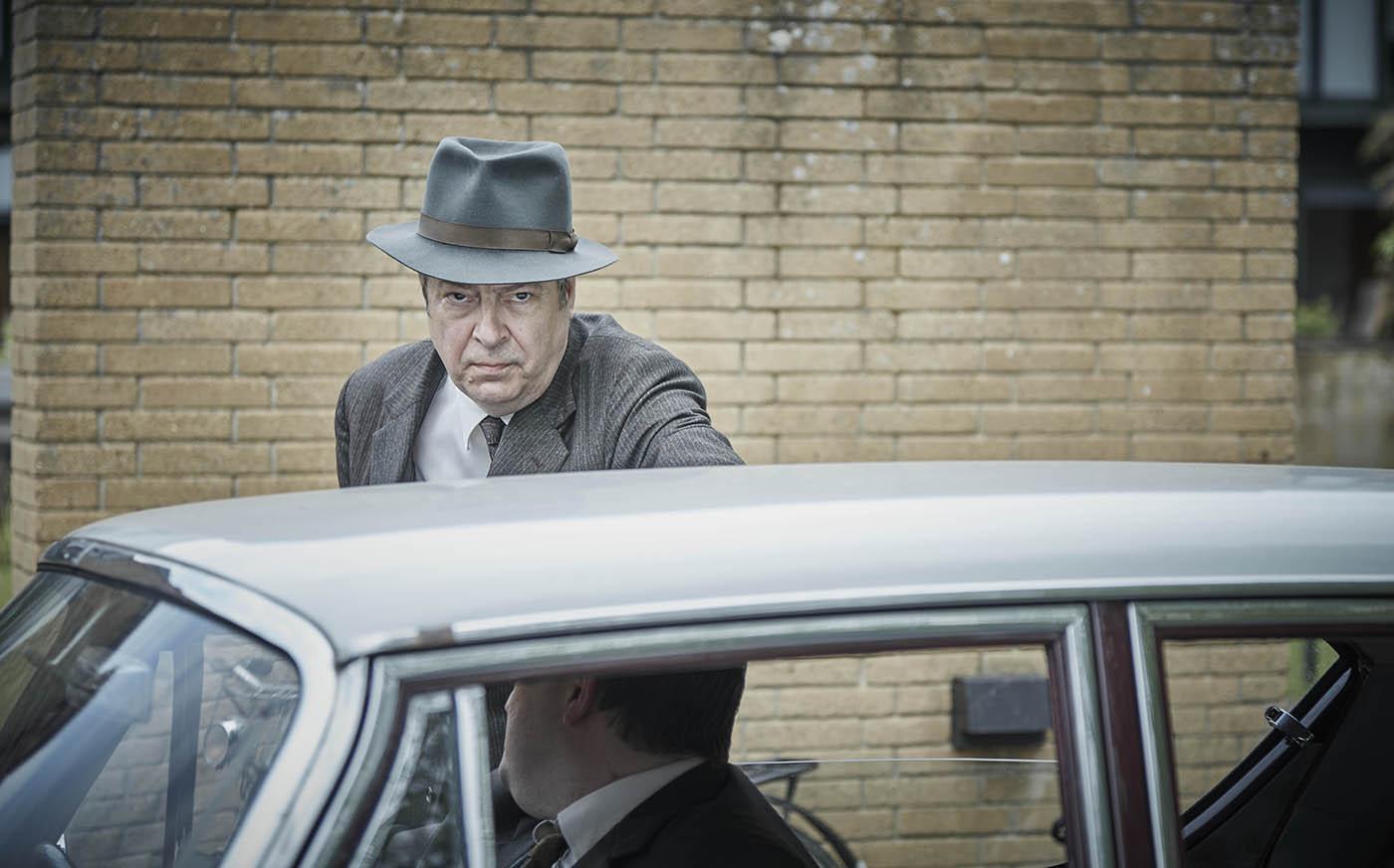 Thursday is dealing with the disappearance of his daughter, but also backing up Endeavour. Photo: ITV Plc and Masterpiece Morse learns from the superintendent that only his exam paper disappeared. Clearly, he has enemies, and he’s only generated more bad blood now with the leak to the Mail. The superintendent recommends a transfer, but Morse refuses. He does redeem himself by acting on Tessa’s scoop about Palfrey. Recalling that the chess computer was originally developed for the post office, he asks the programmers to use it to search for this unknown doctor. After running overnight, the computer returns three options.

Morse and Thursday head out to investigate and eventually arrive at an abandoned house where they find a room with surgery instruments and plaster death masks mounted on the wall. Underneath the mask is a chest filled with water. Floating in it is Tessa’s corpse. Three of the masks are of the faces of Nielsen, Palfrey, and Edison. The others are from soldiers with facial disfigurements; the doctor who lived here was a surgeon who reconstructed the faces of pilots injured in the war.

Morse finds some rolled-up diary pages in the house, written in French. Trewlove translates: the daughter was afraid of the way some man in the house looked at her. Back at the station, details about the doctor’s family turn up in old records. The wife died five years ago. The son once got in a fight with Edison, who was part of his chess club.

Upon searching Tessa’s flat, Morse finds linkages to Kent Finn: they were also sleeping together. Finn has an alibi for the time of Tessa’s death, however: he was with Dorothea. When Morse corroborates this with her, she tells him that she wrote a story about the reconstructive surgeon years ago. The daughter drowned herself at 16, and Palfrey – who worked for the surgeon – testified that the suicide was because the son had shown “unnatural interest” in his sister. The surgeon himself has since passed away.

When it’s discovered that the father of a member of the computer team was a patient of the reconstructive surgeon, Thursday assigns a tail to him, but he is lost near the offices of the Mail. Hoping to get more information from Dorothea, Morse and Thursday visit those offices and find them empty and in disarray, with freshly spilled blood. They find the programmer at the baths, but realize he’s not their culprit when they go down to the boiler room and see Tessa’s bag under the message “Rook takes Knight.” 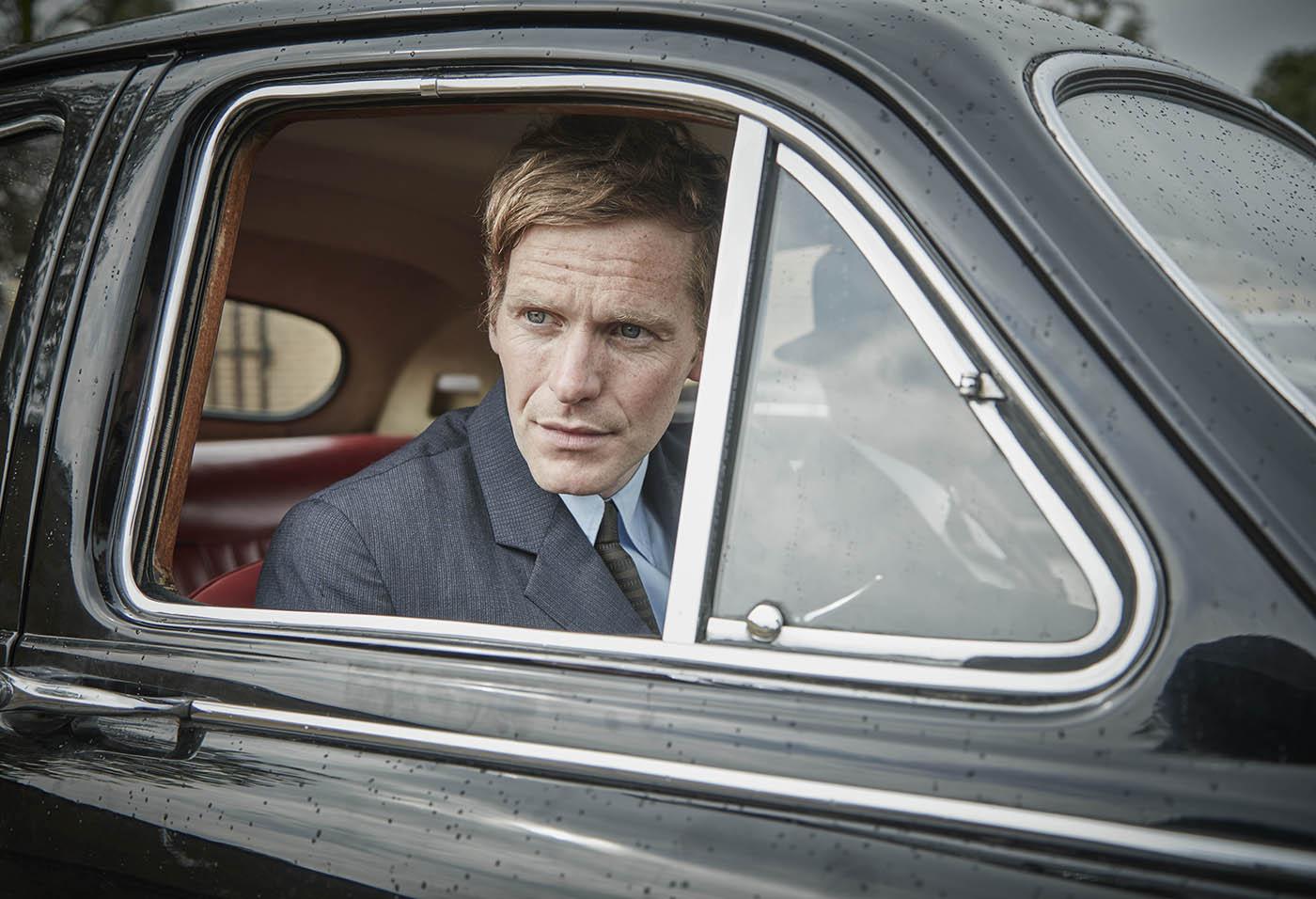 Despite the distraction of failing his sergeant's exam, Morse is still keen in his crime-solving. Photo: ITV Plc and Masterpiece Morse puts it all together. The proper name for a rook is a castle. One of the computer programmers is named Castle. He’s been telling them his next victim every time: Nielsen’s fly, the vicar’s bitch, referred to Palfrey, who had an affair with the surgeon; “Denial” should have been Daniel – Edison Daniels – but Castle is dyslexic. How is Castle linked to them all? He’s the son of the surgeon, who drove his sister to suicide. He drowns his victims because his sister drowned herself. Edison and Palfrey he killed for vengeance; Tessa because she was snooping around.

Morse and Thursday rush to the surgeon’s house to save Dorothea. She manages to untie her hands and choke Castle as they’re driving, forcing the car off the road. Castle flees after he crashes, with Morse in pursuit. They wind up at the boathouse where Castle’s sister drowned herself. Castle reveals that the murders started because of a breakdown: he believed the computer was his sister reincarnated, telling him to take vengeance on people. He killed Nielsen first because the professor suspected that he was going mad. Castle tries to drown himself, but Morse saves him.

Case closed, but we have an ominous omen for next week: a hand turning a tarot card over, revealing a hanged man.