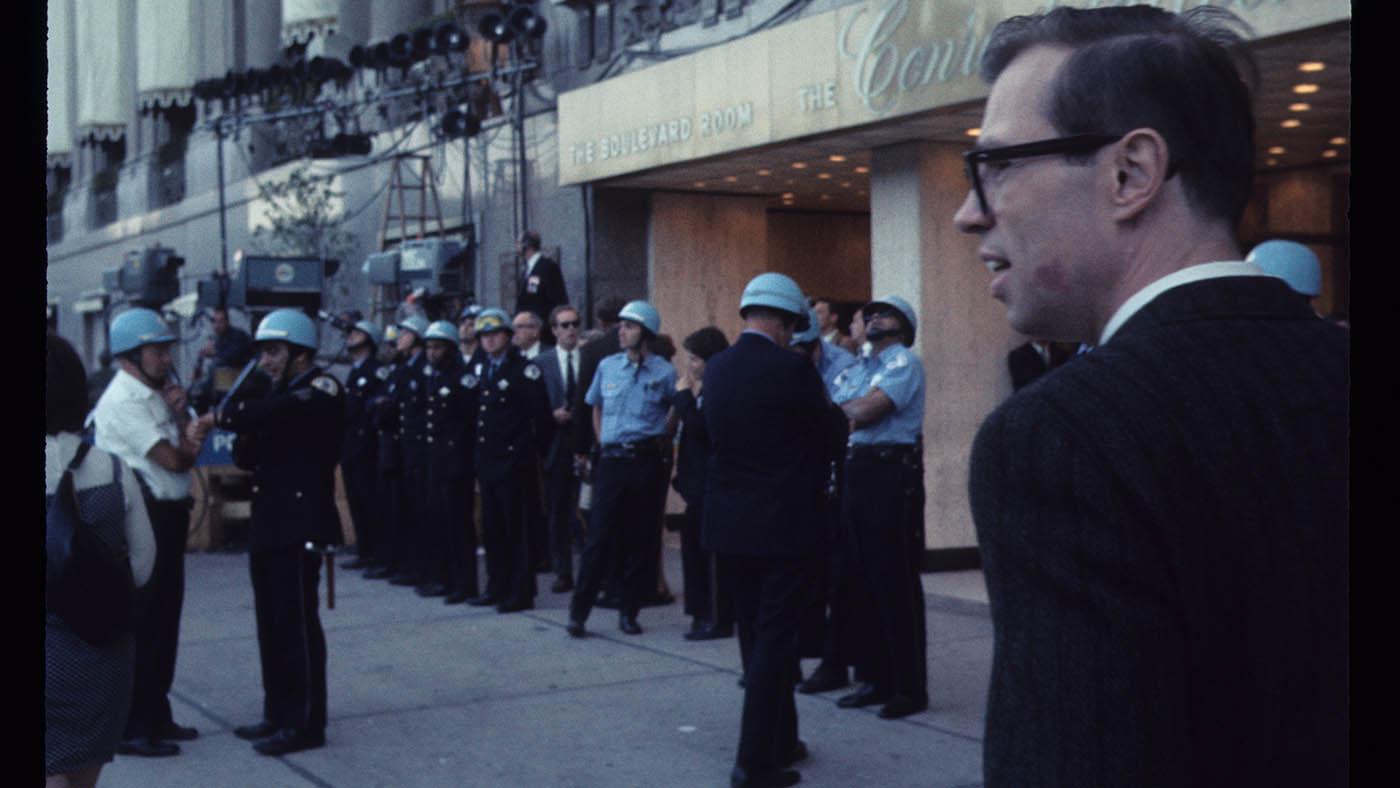 Chicago Police outside the Conrad Hilton Hotel in Chicago during the 1968 Democratic National Convention. Photo: Bea A. Carson

It’s often repeated that Americans are currently experiencing the most polarized period in politics and society since the Vietnam era. In particular, parallels have been drawn between 2016 and 1968, given some of the striking similarities: an extraordinarily divisive Presidential contest, widespread discontent, racialized fear, debates over the use of force by police, frustration with political elites, and a Democratic Party torn in two over a progressive and establishment candidate.

In 1968, all of this exploded at the Democratic National Convention in Chicago. While fears that the 2016 Republican Convention would flare up in violent confrontation like its predecessor were fortunately proved wrong – historical analogies are tricky and overly simplistic – the ’68 Convention is both a defining moment of the Vietnam era and a watershed in our political history. As the Pulitzer Prize-winning journalist Haynes Johnson, who covered the Convention, wrote in a 2008 retrospective for Smithsonian magazine, “In its psychic impact, and its long-term political consequences, it eclipsed any other such convention in American history, destroying faith in politicians, in the political system, in the country and in its institutions. No one who was there, or who watched it on television, could escape the memory of what took place before their eyes.”

What did take place? The context of the Convention is necessary in order to understand what happened; as Norman Mailer, who covered both the Republican and Democratic Conventions of ’68 in his book Miami and the Siege of Chicago, wrote, “No convention ever had such events for prelude.”

1968 was a devastating year from the beginning. On January 30, North Vietnamese and Viet Cong troops launched a surprise attack on locations throughout Vietnam, penetrating even the walls of the U.S. Embassy in Saigon. Photos and TV broadcasts of the Tet Offensive revealed to many Americans the brutality of the war and proved a central lie of Lyndon B. Johnson’s Administration: the repeated claim that the U.S. was close to victory. 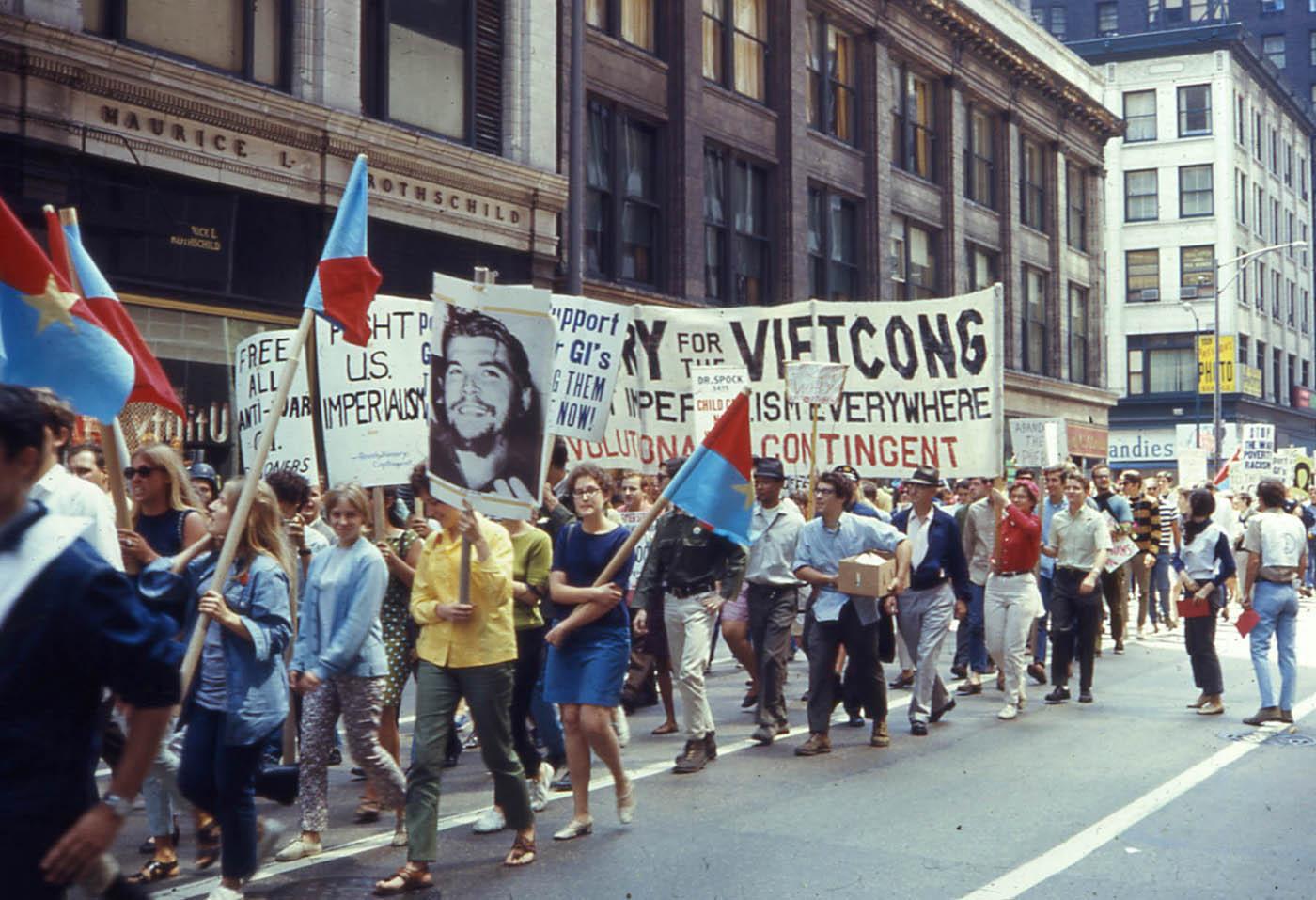 An antiwar march in Chicago before the 1968 Democratic National Convention. Photo: David Wilson/Wikimedia Commons Johnson’s Democrats had already suffered electoral defeats in the 1966 midterm elections as a result of growing frustration with the war, despite landslide victories in 1964. (LBJ had won the presidency that year with 61.1 percent of the popular vote, the highest percentage in modern history.) Now Democratic hawks and Johnson’s allies were even more unpopular. After Eugene McCarthy, an antiwar candidate not regarded as a serious contender, won a surprising margin of votes in the New Hampshire primary in March, Robert Kennedy entered the race instead of supporting Johnson, splitting the antiwar vote in two. Soon after this symbolic defeat, Johnson withdrew from the election. His vice president, Hubert Humphrey, eventually declared his candidacy as the lone hawkish establishment candidate.

Less than a week after LBJ dropped out, Martin Luther King, Jr. was murdered in Memphis, setting off deadly riots in cities across the country. In Chicago, Mayor Richard J. Daley sent police, National Guard, and Army troops to quell the unrest, issuing an order to “shoot to kill” arsonists. At least nine people died.

A month after that, Robert Kennedy was assassinated immediately after winning the California primary. With McCarthy rejected by much of the Party, a vacuum was left in the antiwar camp. RFK’s brother Ted Kennedy was encouraged to run, but refused to be a simple stand-in. Instead, up stepped George McGovern, two weeks before the Convention.

So the Democrats began their Convention in late August in a confused muddle. Two competing antiwar candidates, one a latecomer who sought to win on the strength of the late RFK’s delegates, were up against an elite-sanctioned but unremarkable candidate who stood for an unpopular status quo. Outside in Chicago, activists from the Youth International Party (“Yippies”) and the National Mobilization Committee to End the War in Vietnam (MOBE) planned protests and events, turning up the heat on the already simmering pot. 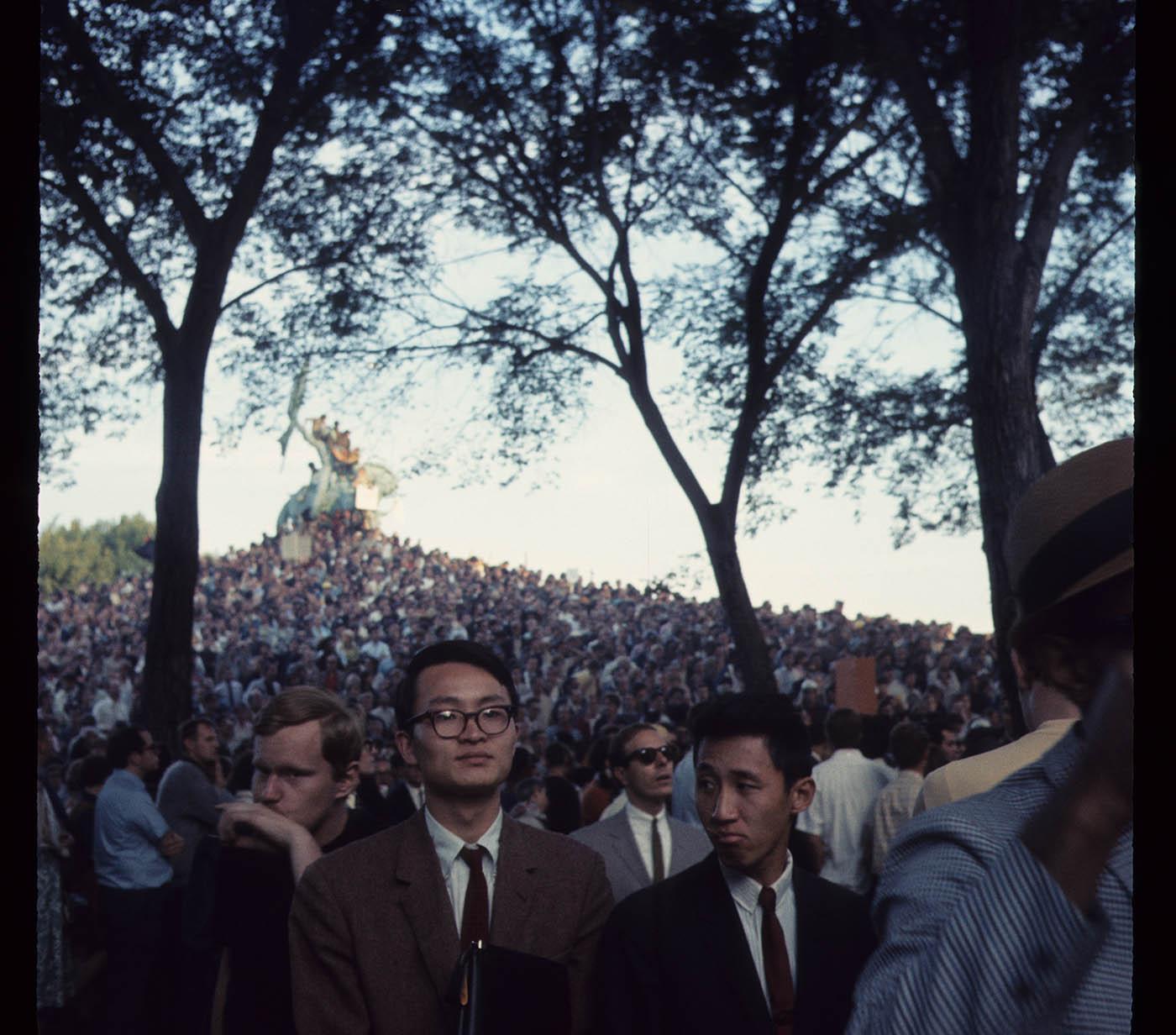 Protesters in Chicago's Grant Park during the 1968 Democratic National Convention. Photo: Bea A. Carson Determined to maintain law and order, Daley refused the protesters’ applications for permits. He also once again mobilized thousands of police officers, National Guards members, and Army troops. A similar militant control was exercised in the convention itself, over party members and delegates; Daley wanted the lackluster Humphrey to win the nomination no matter what.

The Yippies began their protests on August 23 by attempting to nominate Pigasus the Pig, a literal farm animal. The seven protesters were arrested. As the week progressed, a familiar pattern emerged. Antiwar protesters, including poet Allen Ginsberg and folk singer Phil Ochs, would gather in Lincoln Park on the north side. At 11:00 pm, when the parks closed, police would move in to scatter the crowd. Violence often ensued.

Inside the International Amphitheatre, where the Convention was being held, chaos also reigned. At least one delegate was hauled out of the convention hall; when CBS’s Dan Rather tried to intercept him for a live interview, Rather was punched in the jaw. Mike Wallace would also be roughed up during the week; Walter Cronkite told the nation, “I think we’ve got a bunch of thugs here.”

Worse would be captured by the cameras. On August 28, the protesters moved to Grant Park, near the Conrad Hilton hotel. Various minor confrontations between agitators and the police ignited throughout the day. As the protesters moved towards the hotel, they joined a march led by Ralph Abernathy, the civil rights activist whose Poor People’s Campaign had a permit for a demonstration outside the hotel. (Daley was afraid of inciting more racial unrest after the King assassination riots; he sought to appease Chicago’s black community with the permit, while the Yippies and MOBE were predominantly white and middle class.) Reaching Michigan Avenue, the mass of protesters was stopped and held, while the Poor People’s Campaign was allowed to continue. It’s unclear what exactly happened next, but suddenly the police were attacking with tear gas and clubs. TV cameras broadcast it across the country. Mailer wrote that “the Democratic Party had here broken in two before the eyes of a nation like Melville’s whale charging right out of the sea.” A national commission would later call the Battle of Michigan Avenue a “police riot.”

That night, inside the Convention, Senator Abraham Ribicoff denounced “Gestapo tactics in the streets of Chicago” during his speech nominating McGovern. Daley screamed at him in response; many people have contended that he yelled colorful slurs. Despite the animosity towards Humphrey and the war that he supported, he still won the nomination, thanks to wrangling by Daley and other Party insiders. 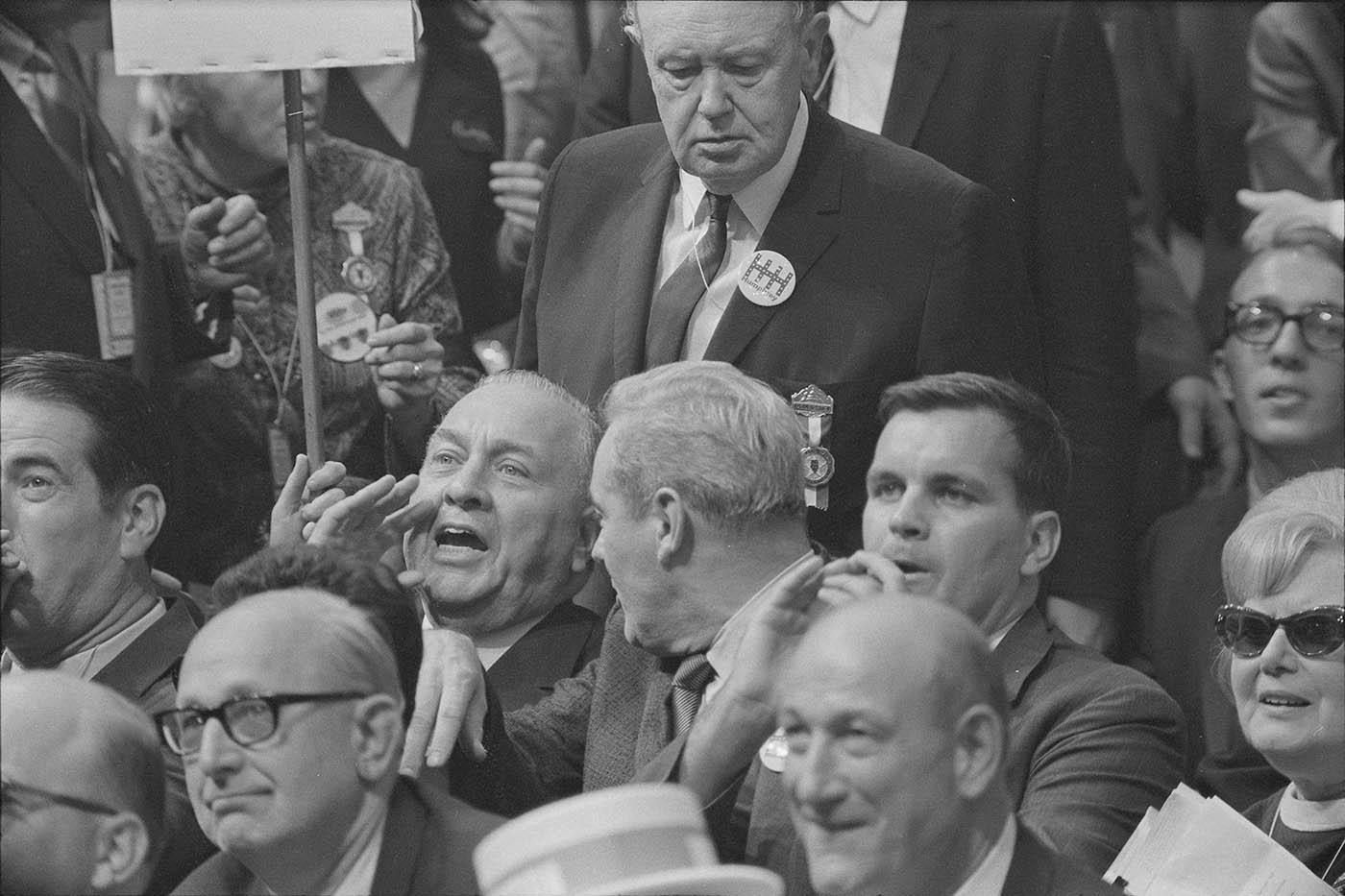 Thankfully, no one died during the entire brutal Convention. Astoundingly, most Americans approved of how Chicago handled the protests, according to polls. Richard Nixon easily beat Humphrey in the election as a law and order candidate. Daley was reelected in a landslide in 1971.

The divisions in the Democratic Party had been blasted open. In the wake of the Convention, the Party created a commission, with McGovern as one of the chairs, to reform the nominating process so that the insider, establishment candidate would no longer win the nomination over the popular candidate. Instead of the convention, the primaries would now be the most important factor in choosing a nominee, a process that has its own problems and inequalities.

Later that year, eight protesters were charged with conspiracy and riot incitation. After one was sentenced to prison for contempt of court, they became known as the Chicago Seven, and only after appealing were their convictions reversed. Their trial and the ’68 convention were memorialized in Graham Nash’s song “Chicago.” Its chorus? “We can change the world/Rearrange the world/It’s dying.”

Edit: This story incorrectly stated the location of the Convention and has been updated.