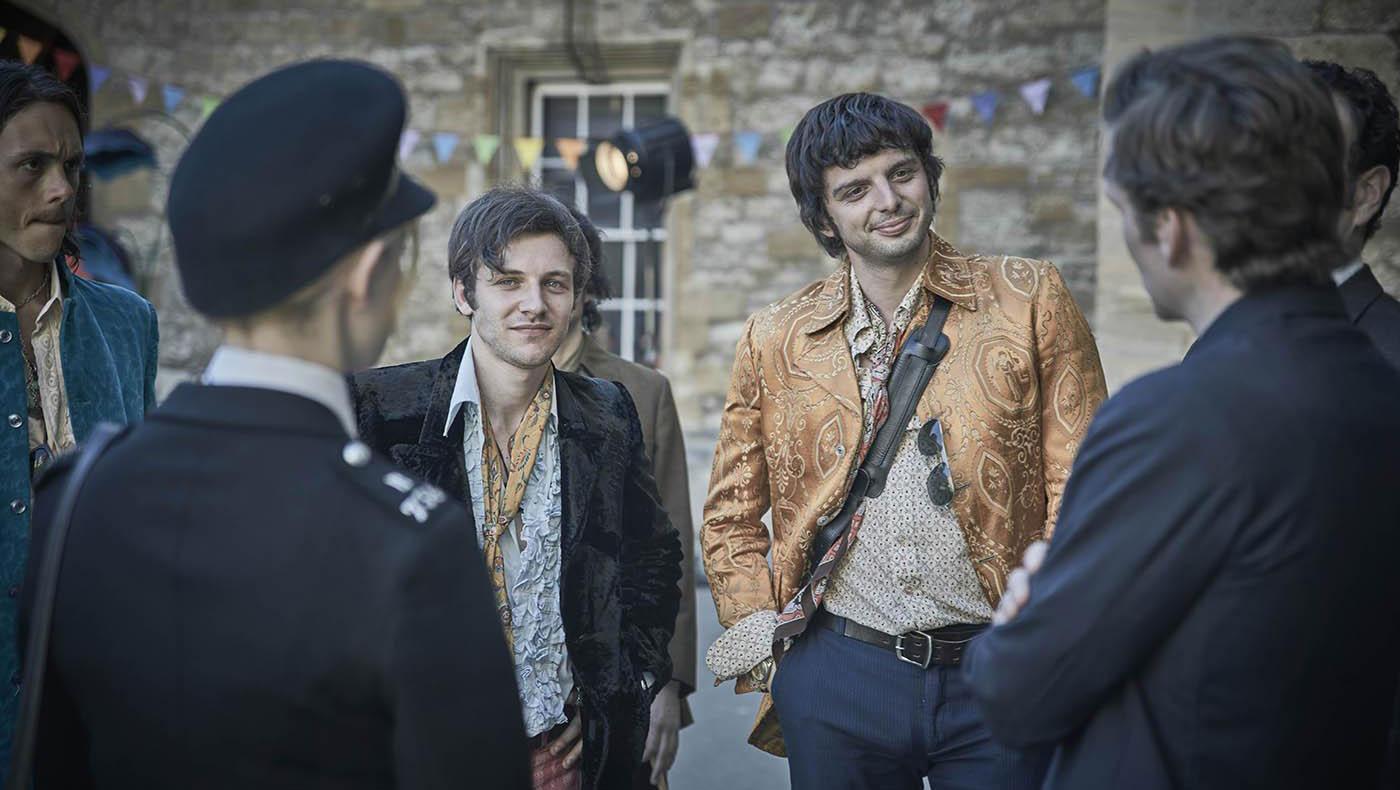 The Wildwood are in a culture war against moral crusader Joy Pettybon. Photo: ITV Plc and MASTERPIECE

There’s a culture war in Oxford, between the sanctimonious “guardian of the nation’s morals” Mrs. Joy Pettybon and the free love, psychedelic band The Wildwood, and Morse is caught in the middle. Pettybon has received a death threat in the mail – no surprise there – and Morse is assigned to protect her as she travels with her fellow moral crusaders and their “Keep Britain Decent” bus to a television interview in Birmingham. Much to Morse’s irritation, this trip out of town distracts him from investigating the murder of Barry Finch, whose body has been found behind a pub.

Finch was last seen working as a bricklayer at Maplewick, the palatial country estate in which The Wildwood, their manager Ralph Spender, and their groupies live, lounge, and play. Finch adored the band. They claim that he stayed at Maplewick for a swim after the day’s labor but then left. Yet the whole thing is less than convincing: Finch’s body was moved to the pub, Spender claims he was in London but is strongly guiding the band’s answers to Morse’s interrogation, and Morse has already had one distasteful encounter with the whole troupe, when he was called to look into a charge that the band possessed pot and Spender tried to bribe him off.

The cause of death is also suspicious. Finch shows signs of strangulation, but actually died from a heart failure, despite being healthy. There’s a mysterious cross-like mark on his torso. But Morse can’t investigate further; he has to go watch over Pettybon.

At the broadcast of The Almanac Show, he’s surprised to see The Wildwood. They’re also guests, to be pitted against the disapproving Pettybon. While the moral crusader pontificates on live TV, her daughter Bettina steps out, and Morse follows. While smoking a cigarette – gasp! A vice! – she chats with him, sharing that her mother began crusading in earnest after the death of her husband.

Back in the broadcast studio, an unshaven man in the audience cries out in anger when Pettybon criticizes homosexuality. The heckler is named Dudley Jessop. He was a magazine editor, until he was prosecuted on blasphemy charges for writing an article suggesting that Jesus and St. Peter were lovers, charges instigated by Pettybon. Now, with his life in shambles, he follows her around the country to protest her hypocrisy at her appearances. After he is forced to leave the studio, some of Pettybon’s hangers-on follow and bloody him up until Morse steps in. When Morse later points out this thuggery to Pettybon, she dismisses it.

More hypocrisy is evident in Pettybon’s camp later that night when her aide, Reverend Golightly, eats some chocolates from her admirers alone in his room, singing a Wildwood song condemned for its sexual lyrics. In the morning, he’ll be dead, killed by an unfortunate combination of a laxative and an undiagnosed brain aneurysm – but those shouldn’t have been fatal. There must have been some undetected chemical in the chocolate as well.

Morse, unaware of the reverend’s mortal ordeal, is close by while it happens. Bettina invited him to her room on a flimsy pretext and then persuaded him to stay for a drink, desperate in her loneliness for less stifling company than her mother. She’s careful to hide the visit from Pettybon, but not careful enough; her mother notices two glasses in her room the next morning and demands that Morse be taken off her security detail. 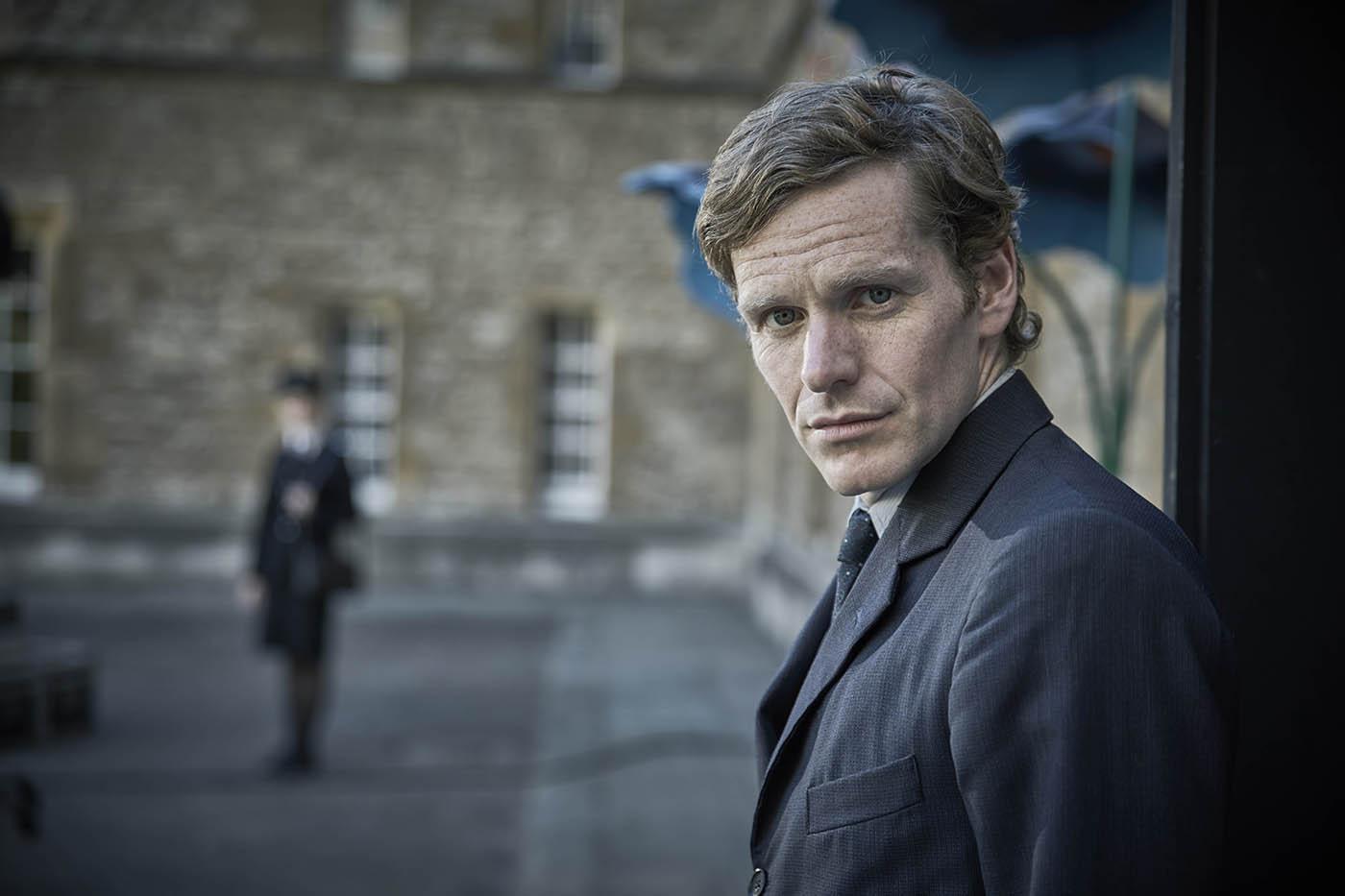 Morse isn't too happy protecting Pettybon, but he soon makes a blunder that takes him off the security detail. Photo: ITV Plc and MASTERPIECE Relieved – in both senses of the word – of that duty, Morse returns to the Finch case. Armed with knowledge of the band’s inner dynamics thanks to WPC Trewlove, he travels back to Maplewick. Unfortunately, only the groupies and Nick, the most esoteric member of the band, are there. Nick seems uneasy about Finch’s death, but reveals nothing. However, one band member’s wife, who dislikes Spender, tells Morse that she heard a car leave the estate early in the morning the night Finch died.

When Nick disappears later that night, Morse and Thursday go to Maplewick to find him. They discover him tripping out of his mind on an island in the nearby lake; Morse picks up some photos lying close at hand. Nick only begins to calm down after the band’s enigmatic personal doctor gives him a sedative. The doctor warns that his mind may not recover from the large dose of LSD, while Nick’s brother Ken notes that Nick normally only partakes in natural drugs: shrooms, marijuana. (Hard to believe this prototypical ‘60s psychedelic band never took acid, but whatever.)

The photos Morse found show Finch, Nick, and one of the groupies naked together – looks like Finch was there for more than a swim. Pettybon would not approve, but then she herself deserves censure. Thursday had the death threat tested for prints, and it turns out that she sent it to herself – her fingerprints are under the stamp. She was trying to drum up sympathy for her cause. Even worse, the detectives have discovered that her own late husband was convicted of public indecency and then committed suicide, an act that Bettina accuses her mother of driving him to by judgmentally condemning him. Bettina decides to finally abandon her mother. No more moralizing for her.

More lies emerge. Trewlove’s knowledge again comes in handy when she ruins Spender’s alibi for the night of Finch’s death. He couldn’t have been on the phone all night planning a tour with The Kinks to America, because the Kinks are banned from the U.S. Morse goes to Maplewick to interrogate the manager.

He finds only Emma, one of the groupies. As he sips her proffered glass of lemonade, he searches the mansion and finds a photo of her with a camera. She must have taken the compromising photo of Nick – because she was jealous of his other lovers. She wanted Nick to herself, but he was a true polyamorist: Finch, the groupies, one of the band members. She tried to kill Finch by strangling him, but he was already dying from a bad reaction to LSD. When Nick woke up, he feared that Finch had died accidentally while they experimented with choking during the orgy, so Spender and the band drove his corpse to London and disposed of it behind the pub. The cross-shaped mark came from a car jack in the trunk. Emma later drugged Nick and planted the photo, hoping to discredit him out of vengeance.

As Morse realizes all this, something else hits him: LSD. Emma laced his lemonade. Reeling, he stumbles away from her as she comes at him with a knife. At the last moment, Thursday and Strange run in to rescue him. They had been questioning Jessop, who told them there was a woman matching Emma’s description backstage at The Almanac Show. She was trying to drug Pettybon with LSD-filled chocolates; combined with the reverend’s aneurysm, they proved fatal.

Recovering from his acid trip, Morse receives a call from an unknown number. A woman’s breathing comes through, then she hangs up. Is it Joan? We end with another tarot card: the lovers. Free love, indeed.