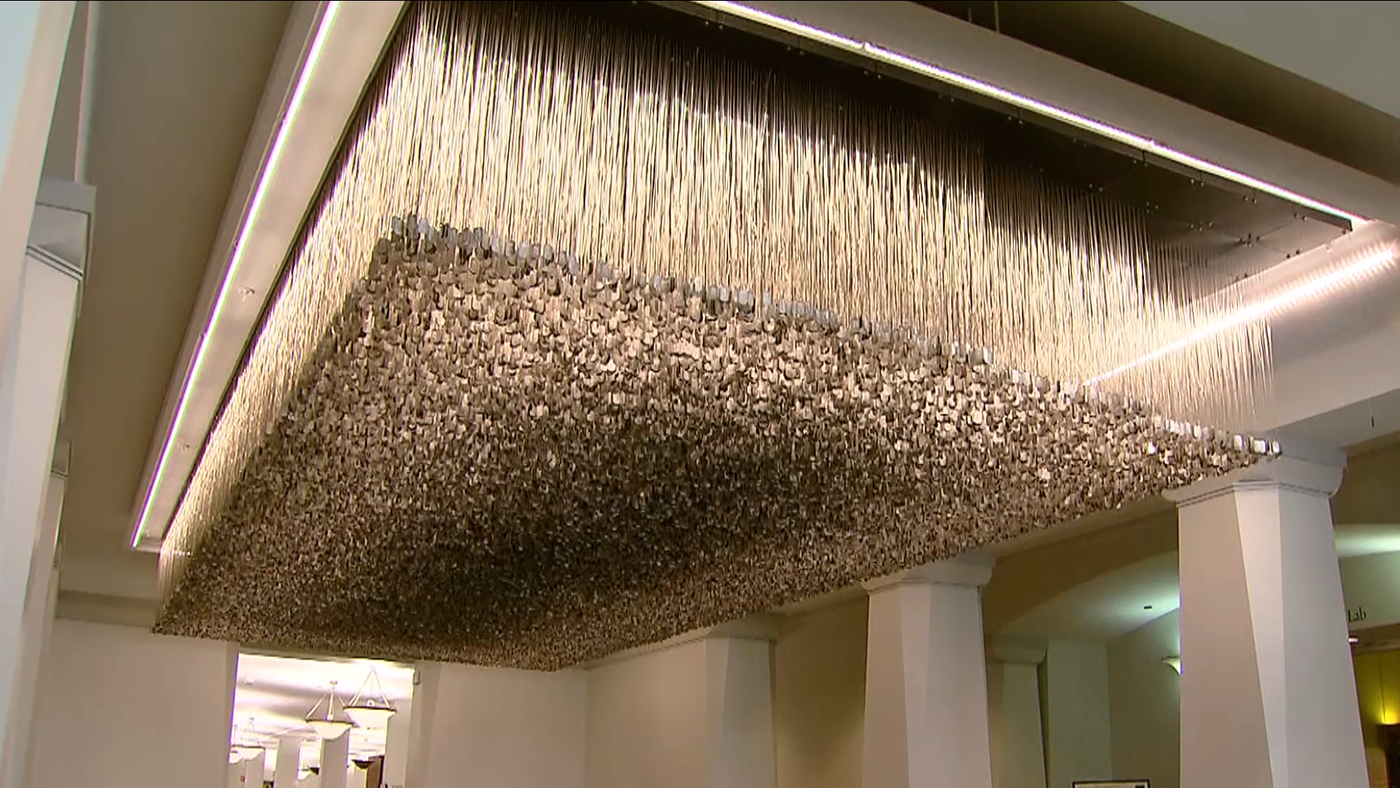 "Above and Beyond" at the Harold Washington Library

Hear more veterans’ stories, explore photographs and video from our archive, and more on our Vietnam War website.

More than three million people died during the Vietnam War, the majority of them Vietnamese: 58,000 Americans and upwards of three million North and South Vietnamese soldiers and civilians. Memorializing these men and women to the extent they deserve is impossible, but many structures have been erected to honor them.

Maya Lin’s Wall in Washington, D.C., completed in 1982, is the best-known, and one of the most effective, examples: a gash in the ground consisting of two polished black granite walls listing the names of every U.S. Vietnam veteran killed or missing in action. There’s also the War Memorial in Hanoi, Vietnam, a pavilion with a cut-out outline of a pagoda that was constructed in 1993 and is located near the square where Ho Chi Minh proclaimed the independence of the Democratic Republic of Vietnam from France in 1945.

Of the American soldiers killed, almost 3,000 were from Illinois. What memorials, in whatever form, can be found near Chicago?

Dedicated on Veterans Day, 2005, this memorial located on the Chicago River between Wabash Avenue and State Street is one of the largest outside D.C. It takes a cue from Maya Lin’s monument by listing the names of the Illinois servicemen and -women killed, missing in action, or who died later as a result of the war on a black granite beam that spans in front of a recessed niche. “Chicago Remembers” is chiseled above the niche; inside it is an imagining by veteran Gary Tillery of the Vietnam service medal given to everyone who served in the war. A timeline of significant events contextualizes the chronologically listed names, and a fountain stands in front of it all. Designed by architect Carol Ross Barney, it replaced a 1982 memorial that stood in a median plaza near the same location between what used to be the two lanes of Wacker, which was moved south to make room for the riverfront plaza. 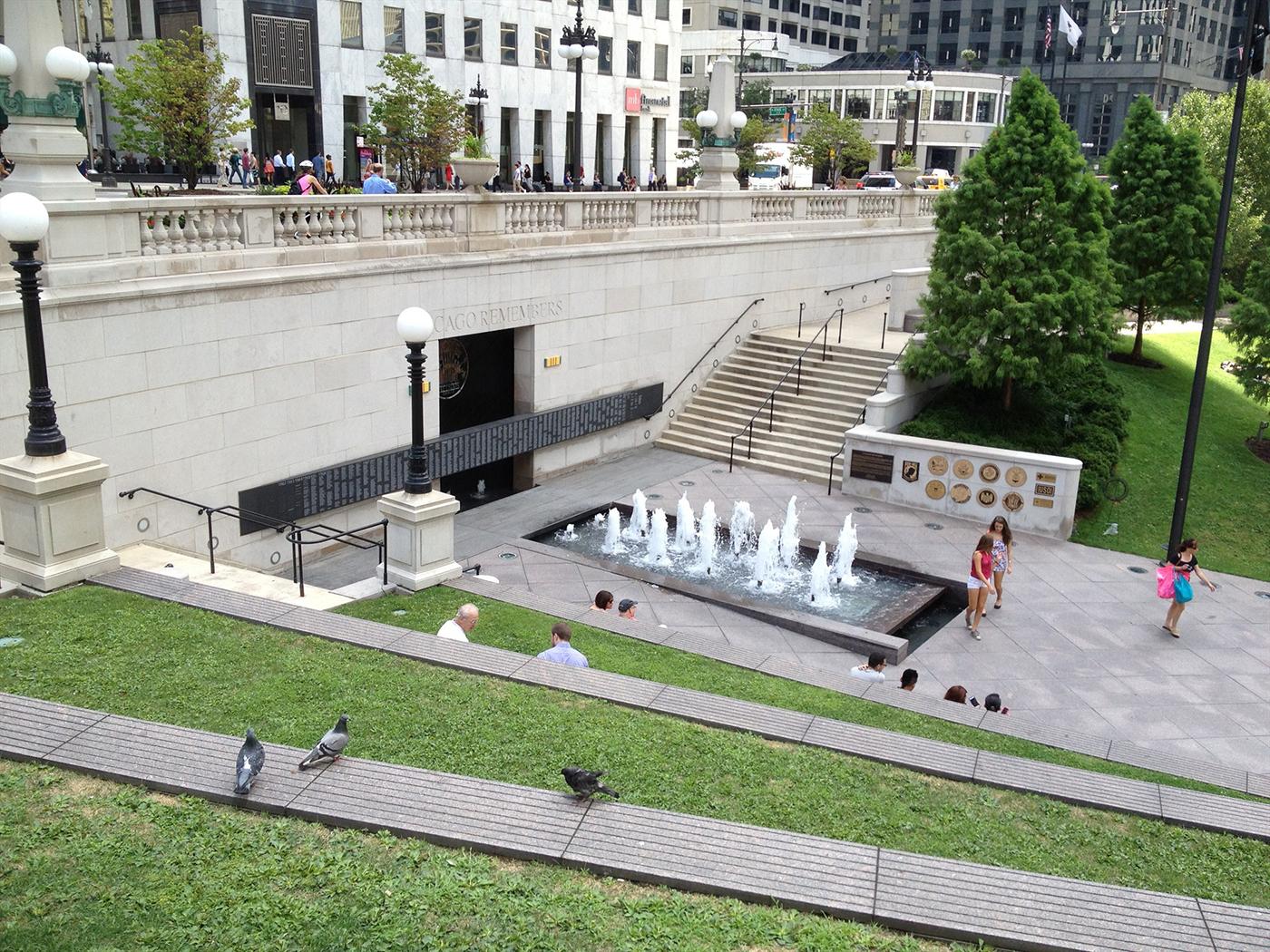 This memorial, on display at the Harold Washington Library through April 2020, consists of 58,307 dog tags, one for each U.S. serviceperson killed in action during the war (it is the only memorial other than D.C.’s. that lists every name). Each dog tag was hand-stamped using an old military machine and lists a name, date of death, and military branch. A single black tag serves as a memorial for “soldiers who died from conditions related to service during the Vietnam War.” Commissioned by the National Veterans Art Museum and created by veterans Rick Steinbock, Ned Broderick, Joe Fornelli, and Mike Helbing, it was originally installed at the Museum’s former location in the South Loop on Memorial Day weekend in 2001.

In 1981, the Vietnam Veterans Art Group formed in Chicago to mount an exhibition of art by veterans that toured nationwide. Following the success of that exhibition and increasing contributions from veteran artists, a permanent museum was founded. In 1996, the city gave a building at 1801 S. Indiana Avenue to the museum, which was then called the National Vietnam Veterans Art Museum. In 2003, it began including work by veterans of all wars, and in 2010 it officially dropped “Vietnam” from its name. It is now located at 4041 N. Milwaukee Avenue and houses more than 2,500 pieces of art by some 255 veterans.

Not yet constructed, this memorial will break ground in Uptown’s Southeast Asian corridor on Argyle Street in 2018. Tam Van Nguyen, a community organizer in Chicago’s Vietnamese community for more than 35 years, partnered with the Vietnamese Veterans Association of Illinois to create this memorial as “a commemoration for those who sacrificed their lives for freedom and as an educational symbol for younger generations to remember the tragedies of war and imagine a different world.” It was designed by John Lee of the Argyle community organization Axis Lab in collaboration with the Vietnamese Veterans Association of Illinois.

Slightly farther afield, this memorial, dedicated in 1991, is located at the Milwaukee County War Memorial Center on Milwaukee’s lakefront. Three red granite columns symbolize soldiers killed in action, those who were prisoners of war or missing in action, and those who returned home safely. Five granite benches signify the five branches of the military, and eleven granite posts represent each officially recognized year of the war. Engraved bricks can be donated; bricks with veterans’ names are included in an inner circle. The War Memorial Center was designed by Eero Saarinen and was dedicated on Memorial Day, 1957, to honor everyone who has served in the U.S. Armed Services.