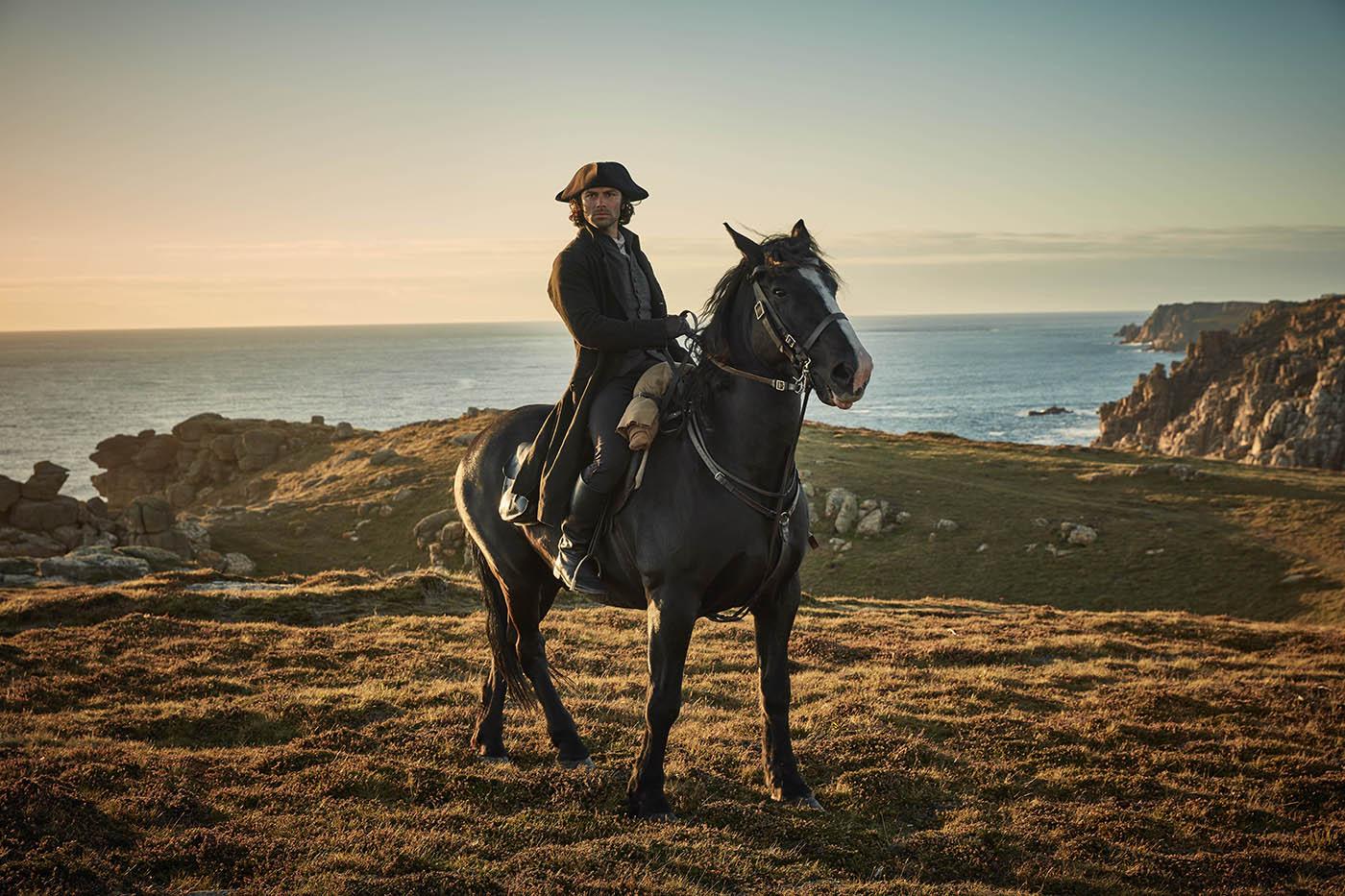 Poldark airs Sundays at 8:00 pm and is available to stream. Read our recap of part 2 of episode 1.

Fasten your seatbelts for a whirlwind recap of season two:

Ross and his wife Demelza reconcile as she continues to suspect Ross of pining for his old love Elizabeth. Ross may or may not have impregnated Elizabeth during a stormy encounter in the interval between the accidental drowning of her first husband Francis and her hasty marriage to Ross’s wealthy archenemy George Warleggan, who is now in possession of Trenwith, Ross’s ancestral home. Ross’s best friend, the altruistic Dr. Dwight Enys, butts heads with spoiled young heiress Caroline Penvenen. Predictably, they fall in love, but her Uncle Ray forbids the match, believing Dwight to be a fortune hunter. Their planned elopement is thwarted when Dwight is waylaid while saving Ross from a sudden ambush. There’s a glimpse of Ross and Elizabeth’s night of passion, Demelza’s furious reaction to Ross’s infidelity – she lets loose with a haymaker that flattens him, to the cheers of women everywhere – and Ross’s continuing indecision between the two women. A devastated Dwight, dumped by Caroline, joins the Navy. Ross successfully plays matchmaker just before Dwight ships out; he and Caroline re-up their secret engagement and “get a room.” Ross, having settled on Demelza after all, woos her back. Newly married George is proud that Elizabeth is “carrying a Warleggan heir.” But, as acerbic nonagenarian Aunt Agatha speculates, is she? Or is Ross the father? A wild-eyed Elizabeth starts to do the math…

Got all that? On with the show! 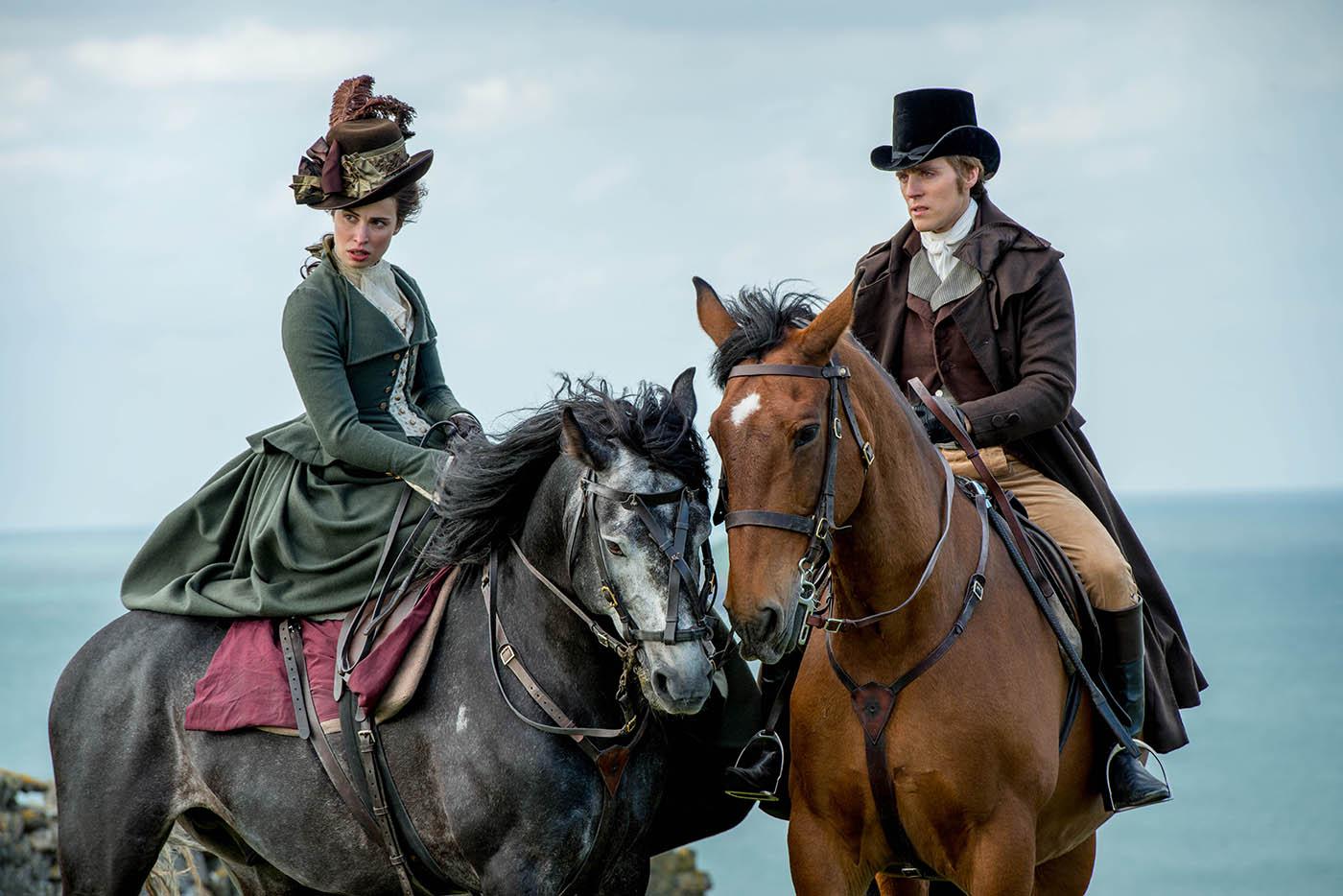 Elizabeth has a baby coming; George is proud, Ross is uncertain Photo: Mammoth Screen for BBC and MASTERPIECE Cut to a rocky beach, roiling surf, and the rugged coastline of Cornwall (all major supporting characters on this show). Several months have passed, and we zoom in on a runaway horse galloping across the bluff with a struggling, terrified, and pregnant-to-the-max Elizabeth aboard. Will they hurtle over the cliff? Not if Ross can help it! He and his trusty steed reach Elizabeth just in time, but she coldly rejects his help, bitter about his “abandonment.” George on his horse catches up to them, and he and Ross have words. Ross rides off in a huff. No good deed goes unpunished, and the opening credits roll.

Demelza and Ross are at Nampara, their home, engaged in the 18th century equivalent of yard work. Ross is moodily hauling thatch up to the roof, and perceptive Demelza suspects he is brooding over Elizabeth. (Also, it doesn’t help that ex-soldier Ross, an adrenaline junkie, is seldom content unless someone is shooting at him.)

Cut to Trenwith, where George is chiding Elizabeth for her increasing recklessness – as in wild horseback rides, lifting heavy objects, and long hikes. (Could she be trying to make the baby come early? Agatha and Elizabeth exchange a look that seems to confirm this.) As George is throwing “the Warleggan heir” into the conversation again (we’ll hear this a lot), in bounds Geoffrey Charles Poldark, Elizabeth’s 10-year-old son by her late husband Francis. Geoffrey Charles loathes George (the feeling is mutual), and is thrilled about his beloved Uncle Ross’s heroics on the bluff. George, bristling at any mention of his rival, icily informs the boy that it’s time he took the Warleggan name. Geoffrey Charles agrees – he will change his name, to “Geoffrey Charles Francis Poldark.” The kid’s got spunk!

Cut to Killewarren, Caroline’s estate, where she is caring for her terminally ill Uncle Ray. His dying wish: that she marry Lord Coniston, “a husband of wealth and consequence” whose numerous proposals she has rejected. Caroline, stalling, insists she won’t consider marrying while her uncle is so unwell.

Back at Nampara, a messenger brings Ross some long-awaited happy news. He shares the missive with Demelza and elated, they hurry off before their nosy servant Prudie can learn what it’s about. 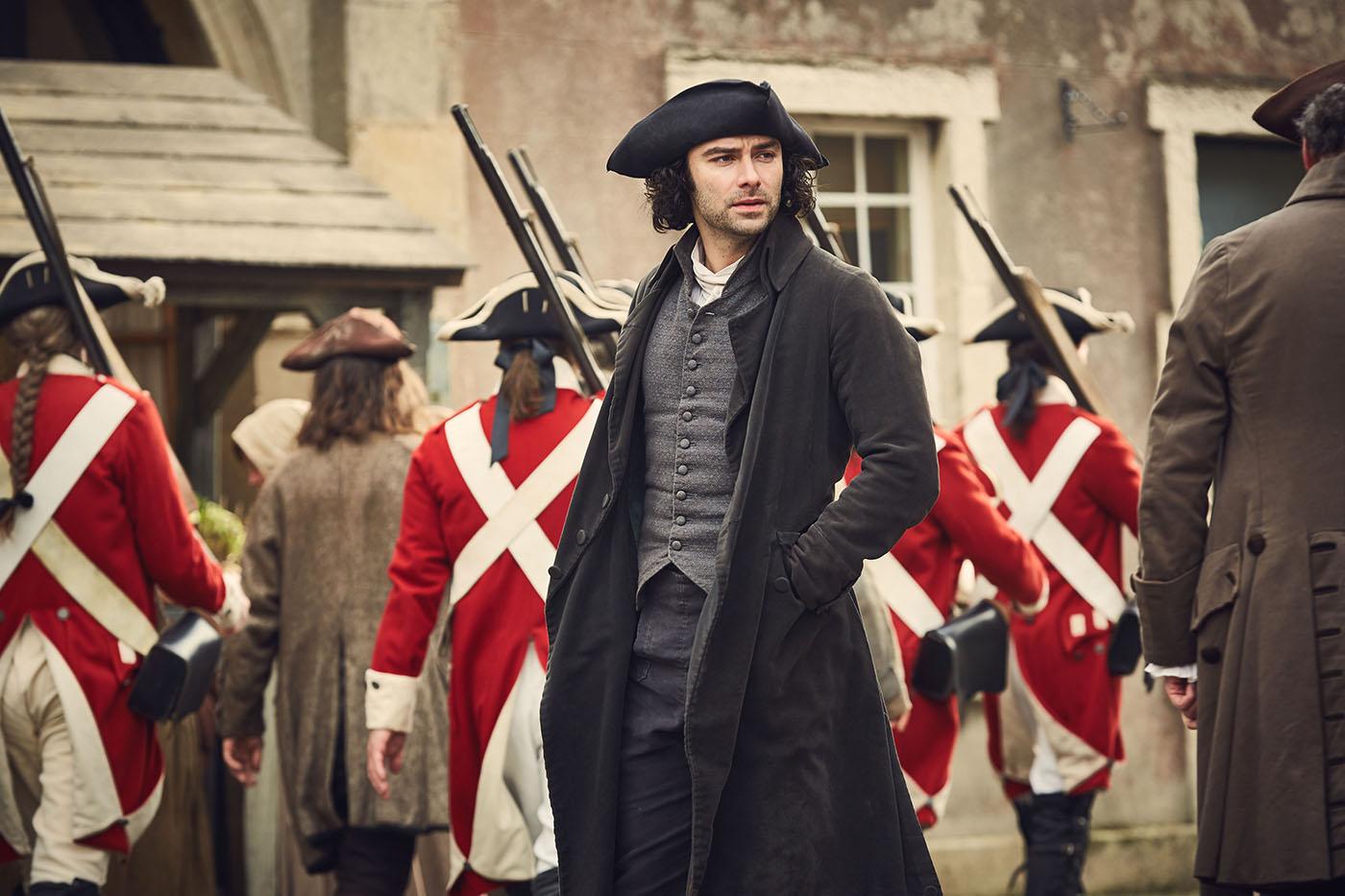 Ross is an adrenaline junkie. Photo: Mammoth Screen for BBC and MASTERPIECE Ross gallops by a handsome young stranger on his way to Killewarren, where he delivers a cryptic message to an excited Caroline: “Tomorrow.” Demelza is working in the garden with Prudie when the young stranger appears – he is Drake, Demelza’s favorite brother. Their abusive religious fanatic father is on his deathbed and is asking for her. Demelza doesn’t want to go.

At Trenwith, George’s despicable uncle Cary reminds George – not for the first or last time – that he married beneath him, urging his nephew to send “the Poldark brat” to boarding school. The “brat” in question, dragged to the dedication of George’s new bank, catches sight of Ross and goes to greet him, but is restrained by Cary and George. Meanwhile, as Agatha watches, Elizabeth restlessly wanders the halls at Trenwith, doubtless contemplating other creative ways to bring on labor.

At George’s bank, we meet the pretty and sheltered Morwenna Chynoweth, Elizabeth’s teenaged cousin. Aiming to drive a wedge between Geoffrey Charles and his mother, George hires the poor but genteel Morwenna as the boy’s governess. Elizabeth, who was not consulted, is angry. As the adults argue, Geoffrey Charles sneaks off to Ross’s mine for the day, and makes sure George knows he did. 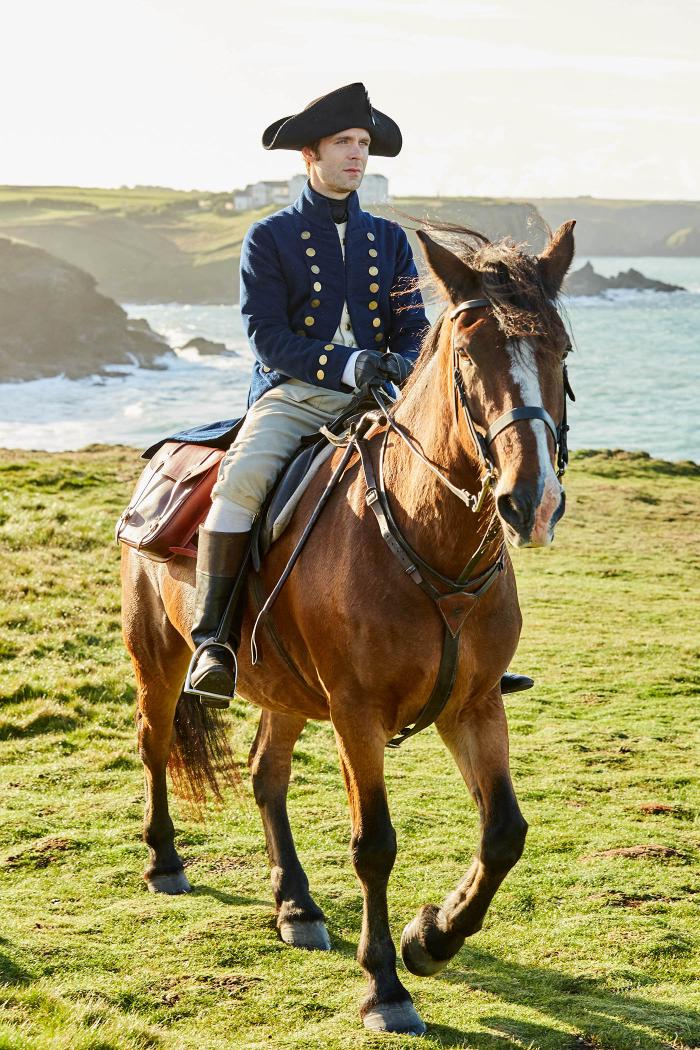 A happy turn of events awaits Dwight... Photo: Mammoth Screen for BBC and MASTERPIECE The following morning, Demelza decides she must journey to her father after all. At the same time, Caroline, overdressed for travel, is bidding farewell to her adorable pug Horace and Uncle Ray, lying to him that she is off to London to say yes to Lord Coniston. A visibly weaker Uncle Ray looks pleased; Caroline looks guilty; Horace looks troubled.

Upon Demelza’s arrival at her dying father’s bedside, we meet her pious brother Sam, who pledges to their father that he and Drake will carry on saving souls (Drake, not so much). Late already, Demelza gallops off, pulling up outside the local church just in time to meet Caroline’s arriving coach. Inside, they are met by Ross…and a beaming Dwight, dashing in his Navy uniform. In slow motion, Caroline hurtles into his arms, and their quickie wedding commences.

At a distance, Geoffrey Charles and his new friend Morwenna observe the happy newlyweds leaving the church. At Trenwith, a desperate Elizabeth is done waiting: grabbing a large ceramic urn, she shatters it on the staircase. George comes running at the sound – and Elizabeth’s scream – and discovers her lying at the bottom, pretending to be unconscious. Frantically, he calls for the lone remaining physician in town, who, it turns out, is busy with another patient. Geoffrey Charles, the only one aware that Dwight is home on leave, quickly sends a messenger to Nampara.

At Dwight and Caroline’s wedding luncheon, we learn that Dwight must return to his ship first thing in the morning. He and Caroline head upstairs for their wedding night, but they don’t get very far due to the arrival of Geoffrey Charles’s note.

Cut to Trenwith, where Dwight is now tending to a finally-in-labor Elizabeth. Characteristically, George is dismissive of Ross’s friend. Back at Nampara, Caroline sadly concludes that her wedding night is a bust, Ross worries about Elizabeth and his maybe-child, and Demelza is resentful.

Elizabeth’s full-throated agony is apparent to everyone downstairs at Trenwith. Anxious to get back to Caroline, Dwight asks George if the other doctor is coming, and is told that he is with Caroline’s Uncle Ray, who is failing fast. Dwight sends word to Caroline, who must now hurry to Killewarren. Mounting their horses in eerie darkness, she and Ross gaze apprehensively up at the “black moon” (a rare total lunar eclipse), as does the group at Trenwith, and Demelza’s brothers as their father finally breathes his last. Elizabeth eventually delivers a strapping, healthy son – “no worse for coming a month early,” Dwight innocently assures her. 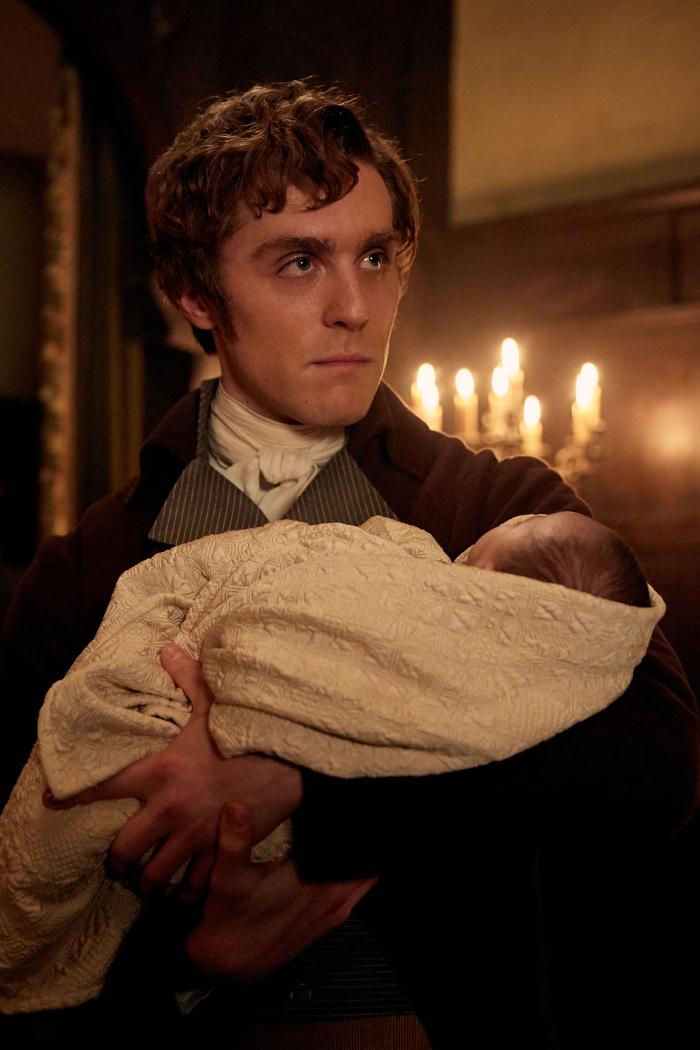 George is sure to gloat about an heir, Valentine. Photo: Mammoth Screen for BBC and MASTERPIECE Having seen Caroline safely to Uncle Ray’s bedside, Ross can’t resist lurking outside the windows at Trenwith, through which he witnesses George announcing the baby’s name (“Valentine”), Agatha placing a curse on George and the child, and Agatha’s mistreatment by George’s hulking servant, Tom Harry.

At daybreak, Ross, impotent with rage, has a breakdown on the beach. At Killewarren, Uncle Ray begs Caroline’s forgiveness for not allowing her to “follow her heart.” Tearfully, she tells him that there’s nothing to forgive, showing him her wedding ring. “Oh, my dear,” he whispers, smiling…and passes away. Caroline clings to him and weeps as we cut to Dwight returning to Falmouth and his ship – they have missed each other.

Profoundly disturbed by what he saw the previous night, Ross pays a visit to George, promising to remove himself from Trenwith and George’s family if he promises to “have a care for” Geoffrey Charles and his aunt Agatha.

A bereaved Sam and Drake are on their way to Demelza when they cross paths with Morwenna and Geoffrey Charles; Drake is instantly smitten with Morwenna. Back at Trenwith, George triumphantly assures Elizabeth that Ross is finally out of their lives forever. Elizabeth has mixed feelings.

Ross informs Demelza of his pact with George. Demelza has news, too: her brothers are staying in the area, and she is pregnant. They resolve “that whatever life sends,” they can face it.

Little do they know.

Winston Graham, author of the Poldark novels, was known for his meticulous research. There was indeed a “black moon” (total lunar eclipse) visible in the skies over the U.K. on the evening of February 14, 1794; Graham may have incorporated it into his story, which may also explain why George and Elizabeth chose to name their son “Valentine.”