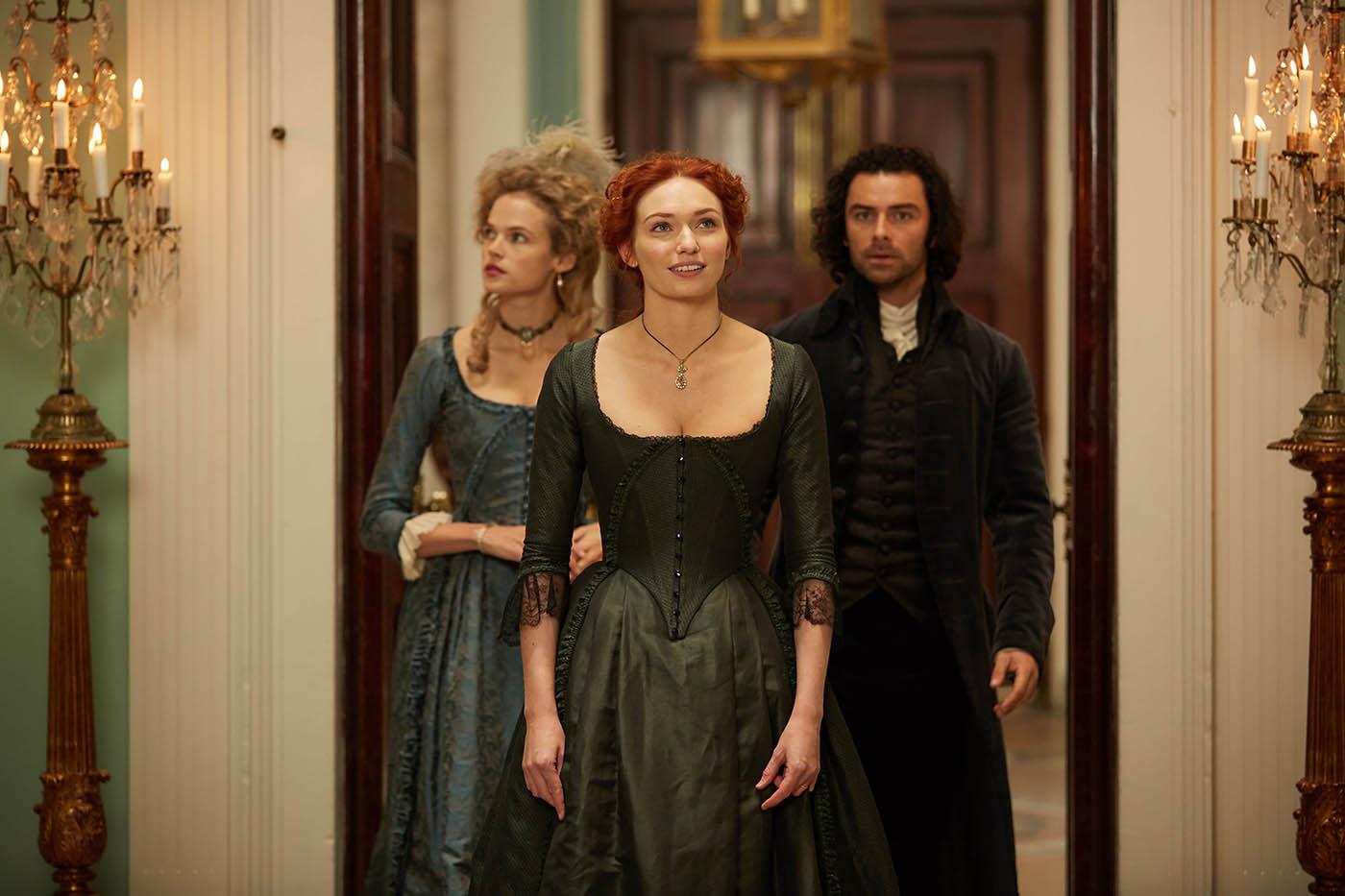 Poldark airs Sundays at 8:00 pm and is available to stream. Read our recap of part 1 of episode 1, and of episode 2.

We open on a montage: Demelza cradling her barely-there baby bump; Elizabeth, holding little Valentine as we dissolve to Ross looking out to sea; laborers breaking up rocks outside Ross’s mine, with Drake and others at work down in it; Sam proselytizing to a group of rapt villagers.

At Trenwith, Elizabeth, jealous of the new bond between Geoffrey Charles and Morwenna, informs George that her cousin Verity will be joining them for Valentine’s christening. Geoffrey Charles, pushing George’s buttons, pointedly tells Morwenna that Verity is a Poldark like him and Agatha. Morwenna, who hasn’t gotten the memo, asks if the “Nampara Poldarks” will also be attending. George snaps that Ross “has chosen to sever all ties” with his Trenwith relations. This is unwelcome news to Geoffrey Charles, and it’s reiterated by Ross to his own family that evening at dinner. Later in bed, Demelza and a shirtless Ross start to discuss it further, but one thing leads to another…

Caroline, Ross, and Demelza on the bluff, leaving flowers at Uncle Ray’s grave – it’s only been a month since her wedding but seems like a lifetime, Caroline remarks. Demelza assures her that Dwight will be home soon. Cut to Dwight’s ship, the Trevail, somewhere at sea; he writes to Caroline that the French fleet has been sighted and an attack is inevitable, but she should not distress herself. (Easy for him to say.) Leaving the gravesite, Caroline thinks it best that her marriage remain a secret until Dwight returns; they can hold a big public celebration then.

Miles away at Tehidy, the estate of the rich and powerful Sir Francis Basset, George is angling for a new job: to replace the late Mr. Penvenen as magistrate. Considering it, Sir Francis invites him and Elizabeth to a reception there the following week. 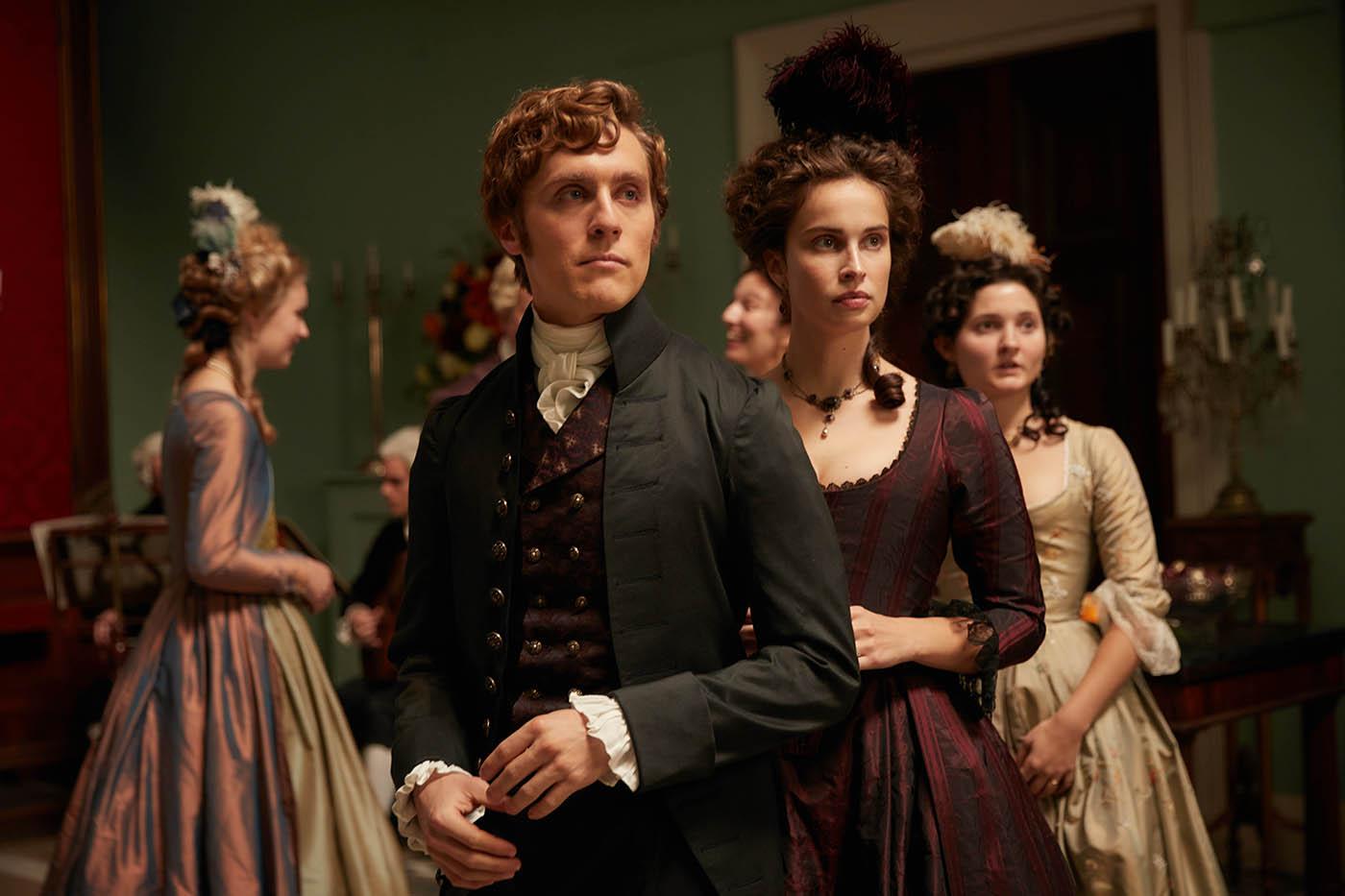 George wants a powerful job; Elizabeth is jealous of Morwenna's bond with her son. Photo: Mammoth Screen for BBC and MASTERPIECE Outside the mine, a fistfight is in progress with bystanders cheering on the combatants. Ross intervenes to discover that one of them is his father’s old friend Bartholomew “Tholly” Tregirls, a jovial geezer who is a dead ringer for Long John Silver, complete with a hook for a hand. He’s been gone 13 years, and Ross had assumed he was dead. Tholly, it’s clear, is an enabler, encouraging Ross to opt for adventure over domesticity.

Cousin Verity and her infant son arrive at Trenwith; she is obviously the apple of Agatha’s eye. (Verity’s husband Andrew, a naval officer like Dwight, is currently at the helm of a merchant ship somewhere at sea.)

Meanwhile, Ross urges Drake and Sam to salvage a heavy wooden mast that has washed up on the beach. As they struggle to carry it home, taking a shortcut across forbidden Trenwith land, they encounter Morwenna picking wildflowers with Geoffrey Charles. Morwenna cautions them about George’s sentries, and Drake thanks her with more flowers. Sparks fly.

At the lavish reception following Valentine’s christening, George and Cary are conversing with Verity and Caroline; Dwight’s and Andrew’s naval service comes up. George remarks, “I trust they weren’t involved in this latest skirmish.” During a storm, a warship ran aground while fighting the French, and a merchant ship was blown off course; he can’t recall their names. Alarmed, Caroline and Verity abruptly decamp to Nampara and Ross rides to Truro, returning with sobering news: the two ships in question are indeed Andrew’s ship, the Esmerelda; and Dwight’s, the Trevail. Ross suddenly has two weeping women on his hands.

Drake and Sam usher a group of poor villagers into Sunday church services, to the annoyance of the snobbish vicar who will not commence until the tardy Warleggans are present. While they wait, Sam takes it upon himself to lead the congregants in a hymn, to the vicar’s intense displeasure…and George’s, when the family finally arrives. Obviously, the “insolent Methodist” Sam has stepped in it, and he is forbidden to return.

Ross travels along the coast grilling the locals for information, and finally gets some: a warship did smash on the rocks on the French coast and its survivors were “set upon by a lawless rabble”; their whereabouts are unknown. Ross can only find out more by going to France himself – a very dangerous undertaking during wartime to which Demelza is adamantly opposed. He promises to wait, as they and Caroline are also invited to Sir Francis’s reception. Perhaps someone will have reliable intelligence there. 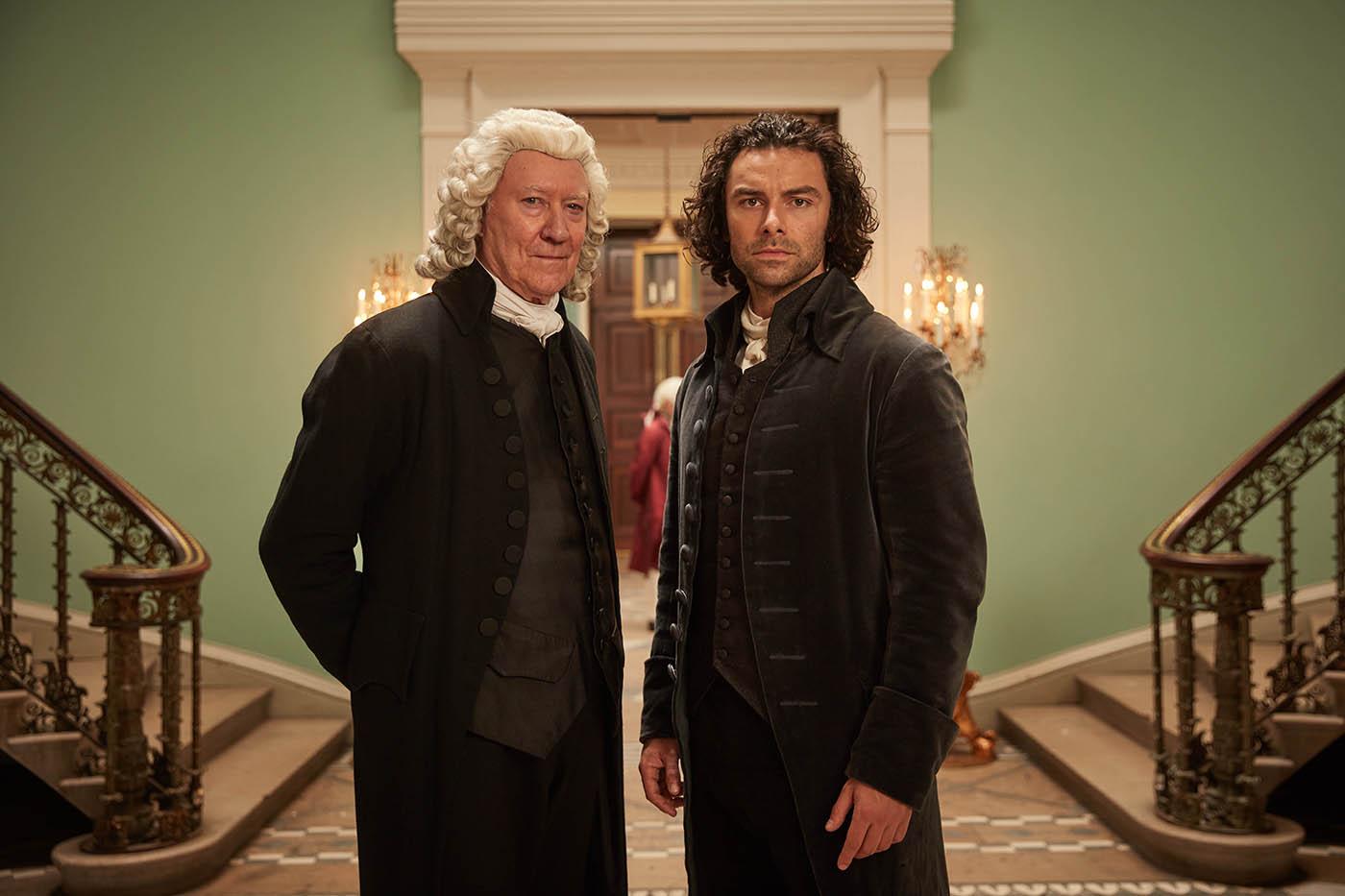 The actor who plays Reverend Halse starred as Ross in the 1970s 'Poldark.' Photo: Mammoth Screen for BBC and MASTERPIECE Cut to a neglected Valentine howling in his crib as Elizabeth sits idly by. Verity hurries in, cradling her own son, and is puzzled by Elizabeth’s callousness. Meanwhile on the beach, Drake once again encounters Morwenna and Geoffrey Charles, who has quickly warmed to his aunt Demelza’s brother. Drake leads them to a “holy well” in the cliff hollow, as…

Ross, Demelza, and Caroline arrive at Tehidy, where they are warmly greeted by Verity and viewed with contempt by Elizabeth and George. The women make a pact to get information about the Trevail and the Esmerelda.

Meanwhile, Morwenna and Geoffrey Charles are enchanted by Drake’s well, and they each make a wish. It’s pretty clear what Drake is wishing for. Before they leave, Drake gifts Morwenna with a homemade shell bracelet. Mindful of their class disparity, she is uneasy about where this is going.

Back at Tehidy, Ross and Sir Francis are becoming fast friends due to their shared concern for the poor. George is green with envy. Ross is taken aside by the Reverend Halse who asks him to take the magistrate position (a century-old Poldark tradition). Ross turns him down flat, even when Halse tells him that George is next in line for the post.

Demelza and Verity have struck out, but an elated Caroline has learned that the Esmerelda has reached Lisbon “weather-beaten but unharmed.” Verity is ecstatic. Demelza, however, is convinced that Ross has erred in refusing Halse’s offer. Ross argues that he would have no autonomy, but Demelza rightly worries that George would abuse his power. Ross appears to be wavering, but it’s too late – a self-satisfied George has just accepted Halse’s offer. 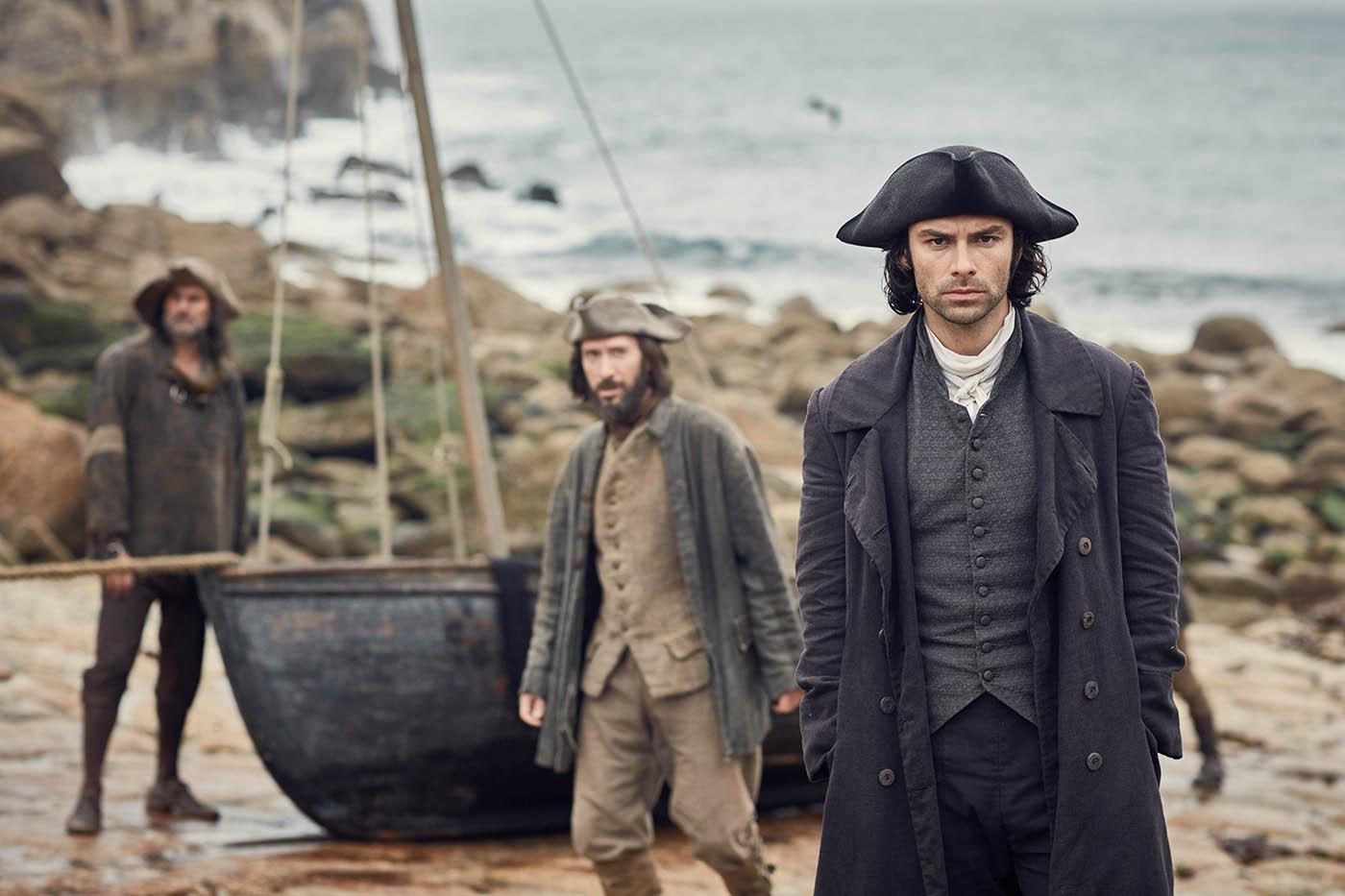 Attracted by danger, Ross is again engaging in reckless heroics. Photo: Mammoth Screen for BBC and MASTERPIECE That night at Nampara, Tholly comes pounding on the door with news – Dwight’s ship ran aground near a French town called Quimper, where there is an old convent turned into a prison; hundreds of English prisoners are being held there. An old French contact of Ross’s father will furnish information in person, “for a price.” Ross is going, of course. Demelza is not happy.

The next day, Verity sets off with her son for Lisbon and a reunion with Andrew. At Killewarren, a dejected Caroline wonders what has become of her husband…

Dissolve to a disheveled Dwight, at riflepoint – he has indeed survived the wreck but is now a prisoner of the French. There is a firing squad, and we see bloodied bodies falling like ninepins. Is Dwight among the dead? As Demelza watches from the bluff, Ross and Tholly (with an infectious grin) embark on their perilous voyage to France to find out. Will she ever see Ross again?

The prison at Quimper (kam-PARE) was a real place, a former Catholic convent. Its nuns were evicted when the French army commandeered it; those who resisted were guillotined. It was notorious for its barbaric conditions.

The Reverend Halse is played by Robin Ellis, the original Ross Poldark from the popular 1970s BBC adaptation of the series.