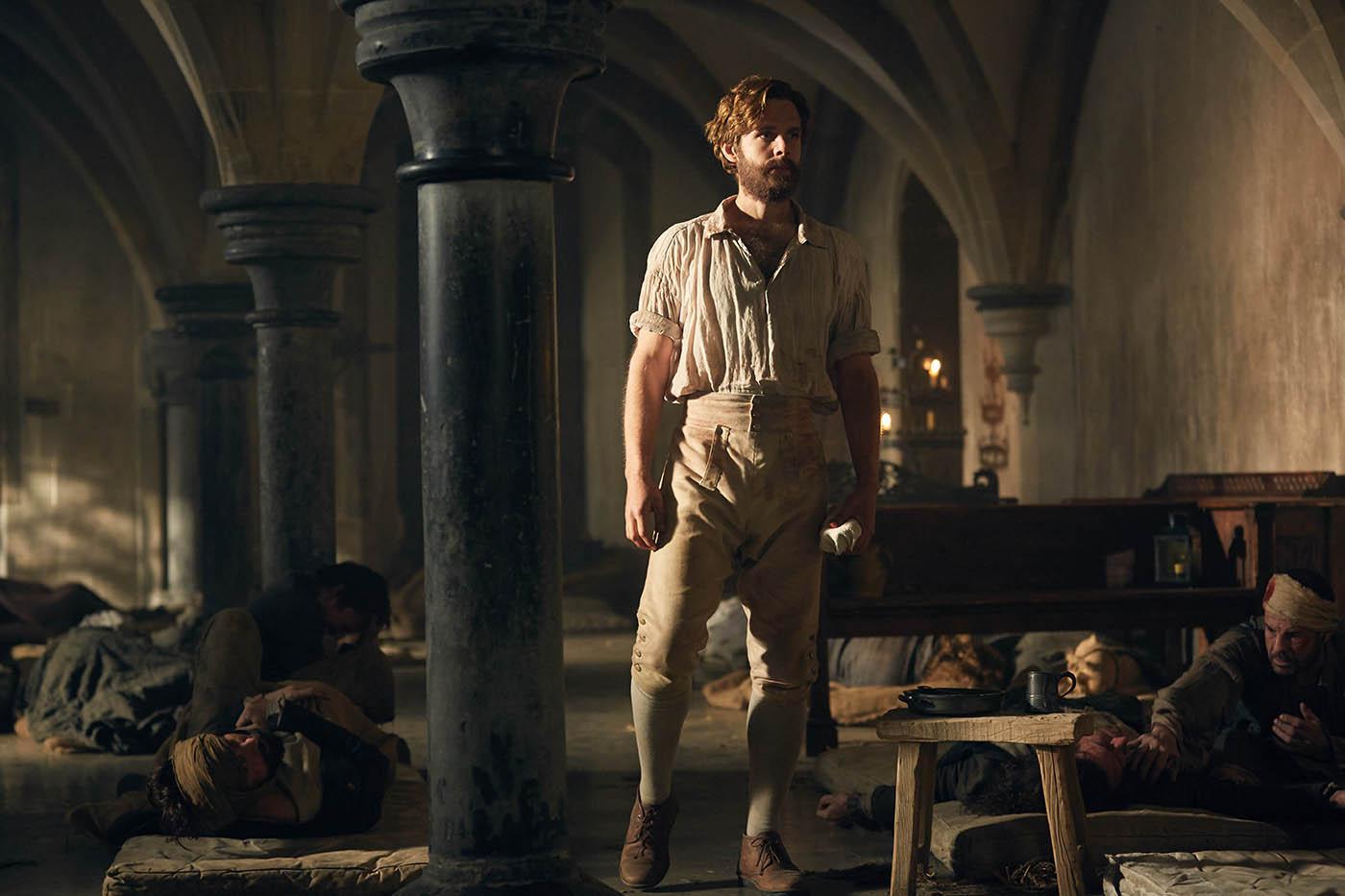 Dwight's situation is desperate. Worse, none of his friends or loved ones even know if he's alive. Photo: Mammoth Screen for BBC and MASTERPIECE

A pregnant Demelza and her son Jeremy are on the bluff looking out to sea. “Your papa’s been gone a long while, hasn’t he?” she says. “Where can he be?”

Back in Cornwall, the Warleggans are proceeding to church. Several villagers touch their caps to Elizabeth and she acknowledges them. “You know these people?” sneers George. They are Trenwith’s tenants, answers Elizabeth; Francis believed in being on good terms with them.  As they arrive, so do the exiled Sam, Drake, and a small group of fellow “Wesleyan renegades” – Sam leads them in boisterous song just outside the church gates. George feels disrespected and Demelza, worried that Sam is inviting trouble, encourages him to set up his own church in an abandoned meetinghouse that Francis had gifted to the village – it’s a major fixer-upper. Sam and his followers set cheerfully to work.

At Trenwith, George already has his eyes on a bigger prize – to be elected burgess for the borough. His actions, however, have not “endeared him to the vulgars,” so he must put on a man-of-the-people act to get the necessary support. Good luck taking over that mantle from Ross! 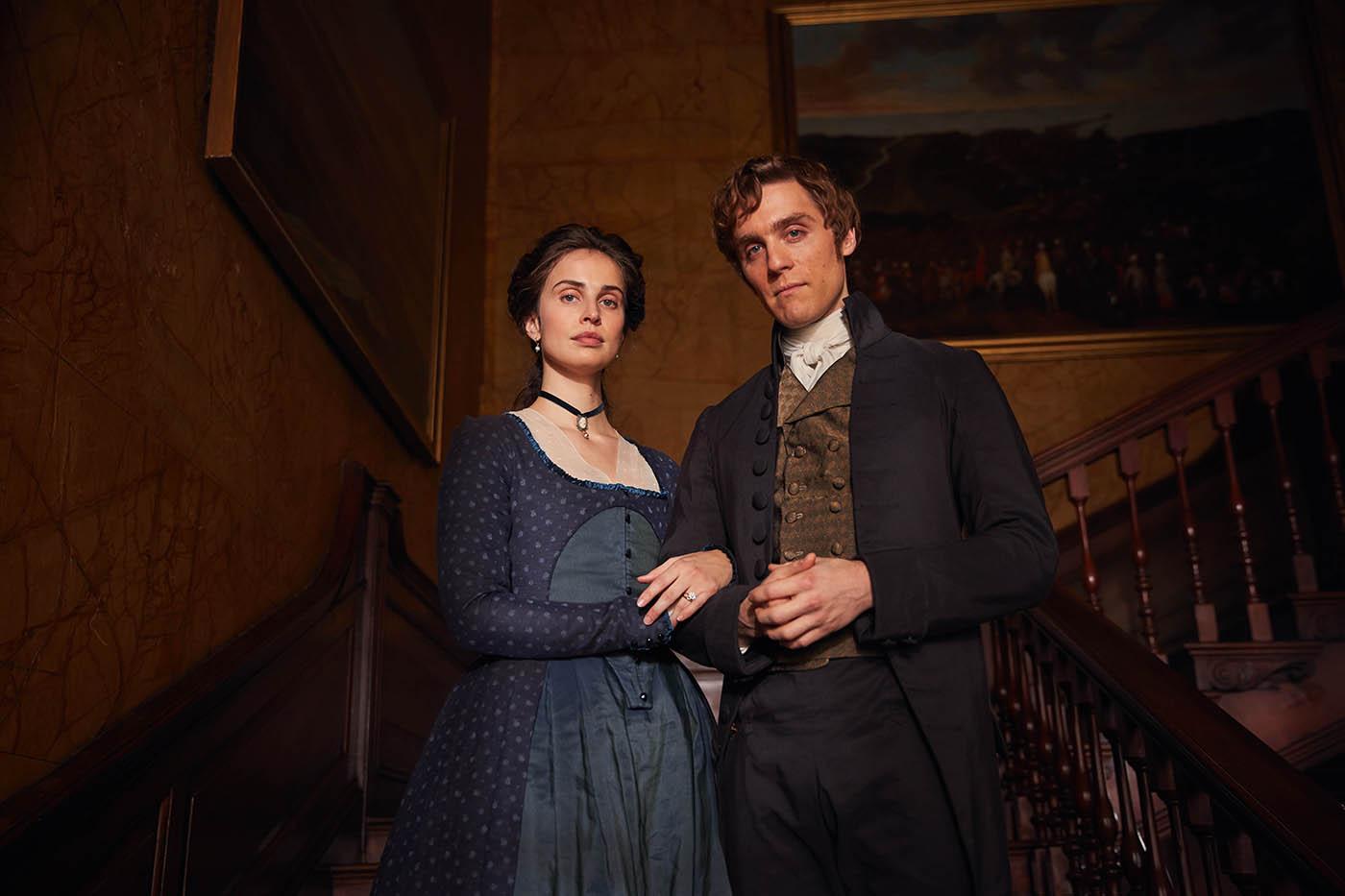 George wants to be burgess, so he needs to curry favor with the common people - not something he's good at. Photo: Mammoth Screen for BBC and MASTERPIECE

In a French tavern, Clisson confirms that most of the Quimper prisoners are sick and wounded Englishmen, survivors of a recent sea battle. He knows a guard who might provide names for a price, plus a cut for himself. Ross surreptitiously pays up, and Clisson promises to return. That night, he does. The prisoners are officers; names will cost more. Begrudgingly, Ross hands over half the money, with the other half payable when he gets the list. Clisson warns him that the longer he stays, the greater the chance he will be arrested for spying.

George hears about “a group of Methodists” sprucing up the old meetinghouse. He sends his hulking servant Tom Harry to learn who they are. As Sam and Drake emerge after their first service, Tom Harry rides by, leaving with a satisfied smile.

At the tavern, Mariette, a seductive barmaid who has been closely monitoring Ross’s interactions, sashays up to him to ask his business. He is a wine importer, he replies; his papers are in his room. Coming on strong, she suggests they “go up and inspect them.” Ross politely demurs – he is married with a child. Hard as nails, Mariette suggests that as a stranger, he cannot afford enemies; Ross trusts he has made none that day. But he surely has.

Cut to George in magistrate’s wig in the courtroom, coming down hard on a peasant who has poached a pheasant. (So much for being a man of the people.) George is reading a message from Tom Harry when Caroline arrives, hoping for information. In a roundabout way, she brings up Dwight – surely, she asks, his return would be good for the town? As Dwight’s name is not on any prisoner or survivor list, George tells her callously, she must assume the worst. Caroline is deflated.

Not surprisingly, once he learns of Sam’s connection to Ross, George rescinds Francis’s gift of the meetinghouse. Since there was nothing on paper, Sam concedes that it’s in the Lord’s hands now. “Sometimes the Lord needs a little help,” retorts Demelza, urging him and Drake to approach Elizabeth with Zacky Martin, a longtime tenant known to her.

In the tavern, Ross and Tholly receive word that Clisson will hand over the prisoner list to them on Sunday. But Mariette now exacts her revenge – coldly, she directs soldiers to their table and over Tholly’s objections, they drag Ross away. 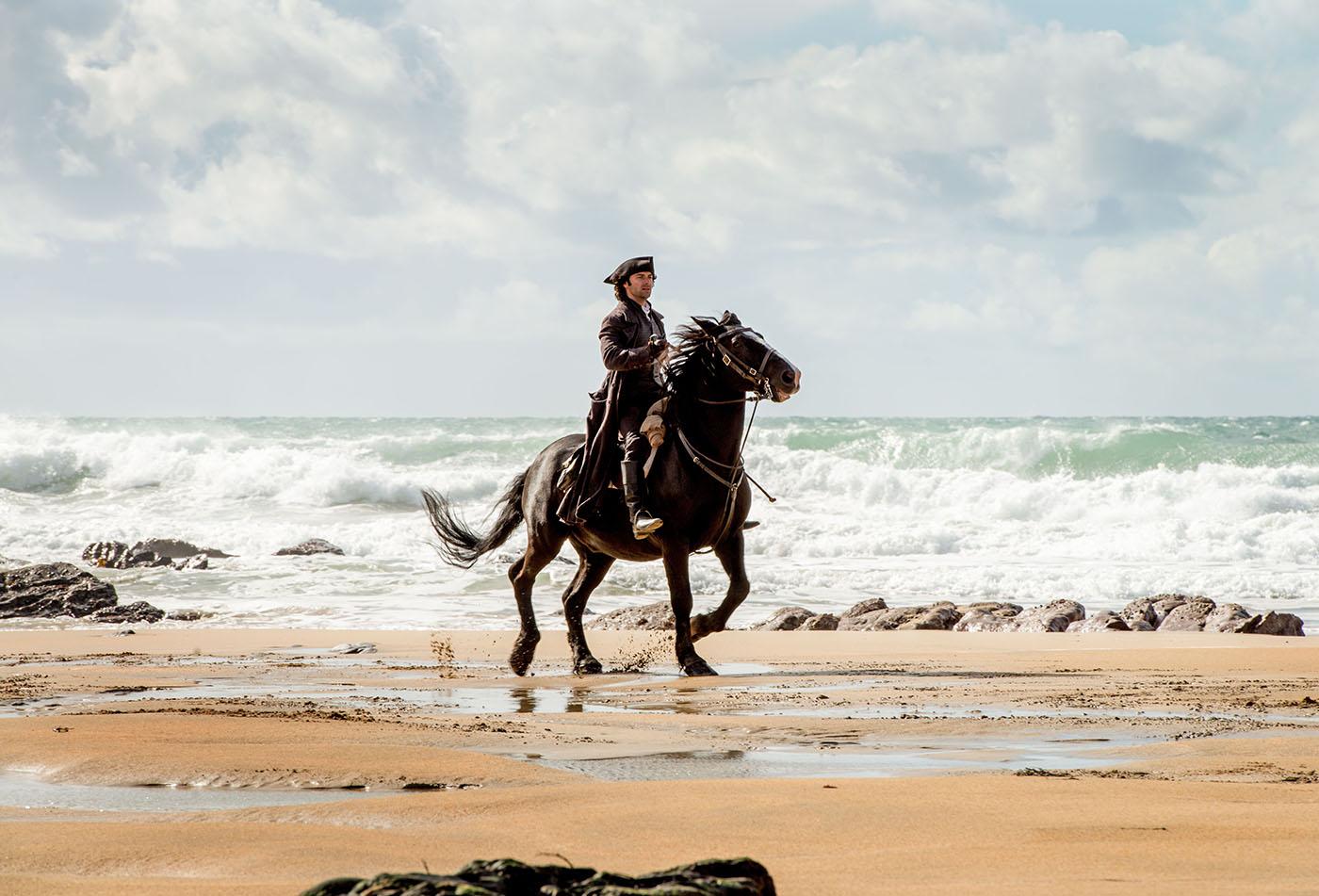 Ross, as usual, has thrown sense to the wind and is indulging in reckless heroics. Photo: Mammoth Screen for BBC and MASTERPIECE

Drake, Sam, and Zacky arrive at Trenwith, where they are confronted by a truculent Tom Harry. He admits only Sam and Zacky, leaving Drake in the drive, where Geoffrey Charles promises to send him a note when it’s safe to visit…can Drake read? Indignantly, Drake lies that he can; later, we see Demelza teaching him. Sam and Zacky’s audience with Elizabeth goes well, but when she tells George of it, he lies that Ross put them up to it in order to swindle him. Elizabeth is outraged – bye-bye, meetinghouse!

Ross is being rebuked by a shady French official -- he did not notify the authorities upon his arrival and his penalty is imprisonment. Ross suggests a bribe…er…fine instead, and the official agrees, on the condition that Ross depart France forthwith on a British ship now in the harbor. Ross, stalling, offers to up the ante to delay until after Sunday, but it’s a non-starter; he will be executed if he is seen after midnight. Guards “usher” Tholly and Ross to the dock.

That night, aboard the ship just after it has left port, Tholly (risk-averse for once) assures a restless Ross that “any sensible man” would have left now. Since “sensible” has never been in Ross’s wheelhouse, he asks Tholly to get word to Demelza and jumps overboard, swimming off in the darkness. Back home, Tholly relays his message to Demelza; predictably, she is furious. Since Ross is not available to ask, she defiantly bestows on Sam and Drake his empty storehouse. Sam and his flock set to work, again.

Ross is hiding in a horse barn. Donning a stocking cap, he pulls up his collar, and in this flimsy disguise, keeps his rendezvous with Clisson, who tries to extort more cash before turning over the precious list. Before Ross can leave, however, “hell-hath-no-fury” Mariette, Shady Official, and several soldiers block his path. He overpowers at least eight of them, action movie-style, and flees into the night.

George and Elizabeth receive an invitation to a banquet being given by a Lord Godolphin, whose nephew is about to come before George’s court, accused of assaulting a woman. (Coincidence?) George, of course, finds in favor of the nephew, ordering the distraught plaintiff to stand trial for perjury. Elizabeth, in the gallery, is dumbfounded, then deeply disturbed. Later, a doctor prescribes a “helpful little tincture” (probably laudanum) to calm her nerves. It’s a slippery slope...

Morwenna, Geoffrey Charles, and Drake are having a lively jaunt on the beach. Morwenna and Drake play an 18th century version of Truth or Dare, and he dares her to kiss him.  No, she says coyly…not while Geoffrey Charles is around, anyway. 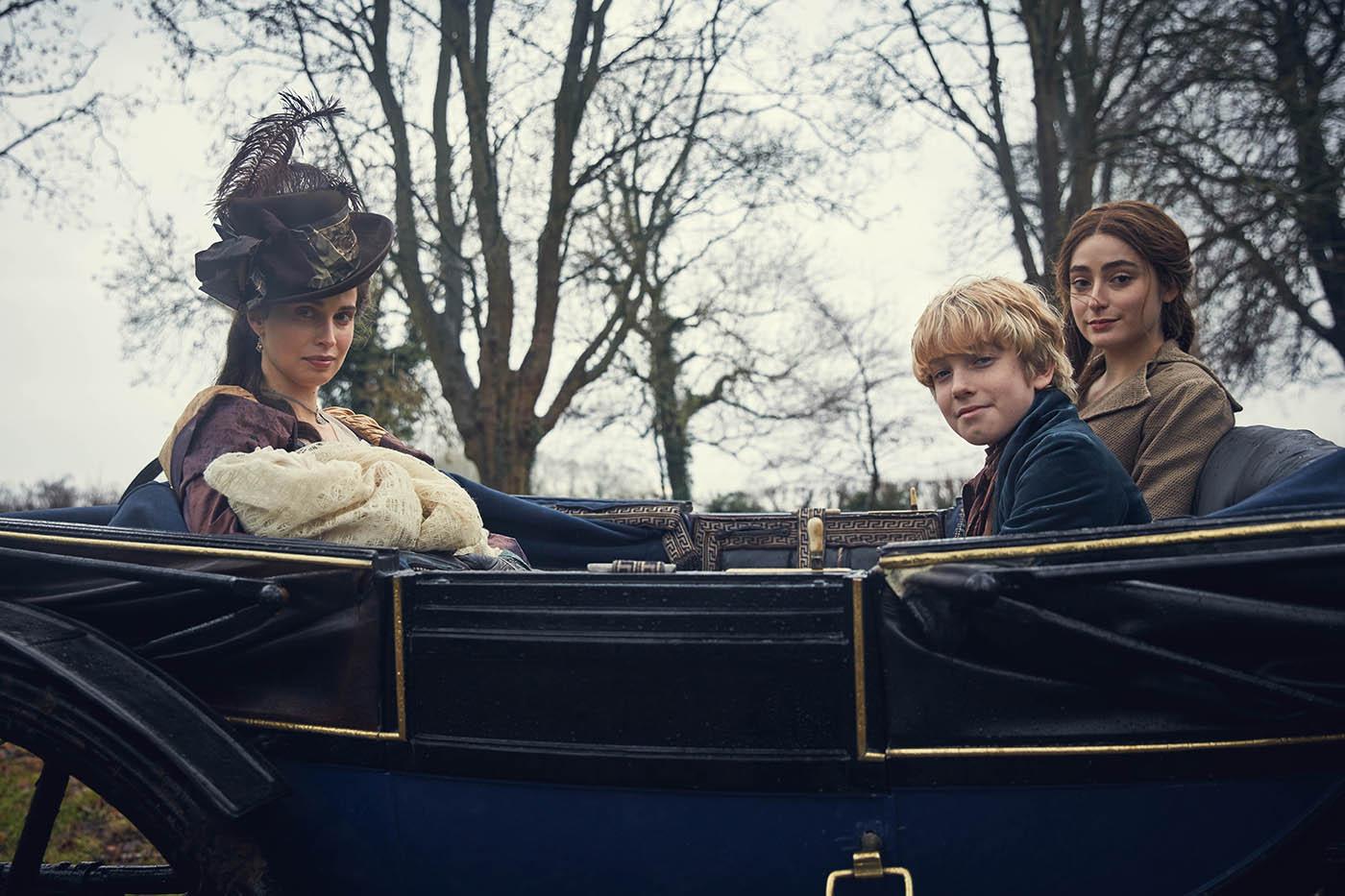 Morwenna and Drake's relationship has some roadblocks: the rest of the Warleggans, Geoffrey Charles's constant presence, class difference. Photo: Mammoth Screen for BBC and MASTERPIECE

At the end of her rope, Demelza is moodily collecting firewood when Ross miraculously appears -- against all odds, he has made it back to Cornwall! After they embrace, he hands her Clisson’s list. As her finger travels down a column of names…

Dissolve to the gloomy interior of Quimper prison. Sick and wounded prisoners are lying everywhere as guards randomly shoot some and abuse others. A bearded and filthy Dwight, in the remnants of his uniform, springs into action when a young lieutenant, Hugh Armitage, is brought in with a bloody head wound.

At Killewarren, Ross shares the good news and Caroline sinks to the floor, half in a faint. Dwight is alive! Yes, Ross’s expression suggests, but…

In Truro, a puffed-up George is gloating to Elizabeth about his “astute and sensitive” handling of the Godolphin case, which has firmly planted him in his Lordship’s good graces. Elizabeth, in the arms of Lady Laudanum, shrugs and takes another swig of wine. George is oblivious.

As Sam and his Methodists put the finishing touches on their second church, Ross is angry that Demelza took it upon herself to donate his storehouse. She responds with a fiery feminist manifesto. Humbly, Ross acknowledges that he was wrong, and clothes start to come off. One thing leads to another…

And that’s where we leave it, for this week…unfortunately.