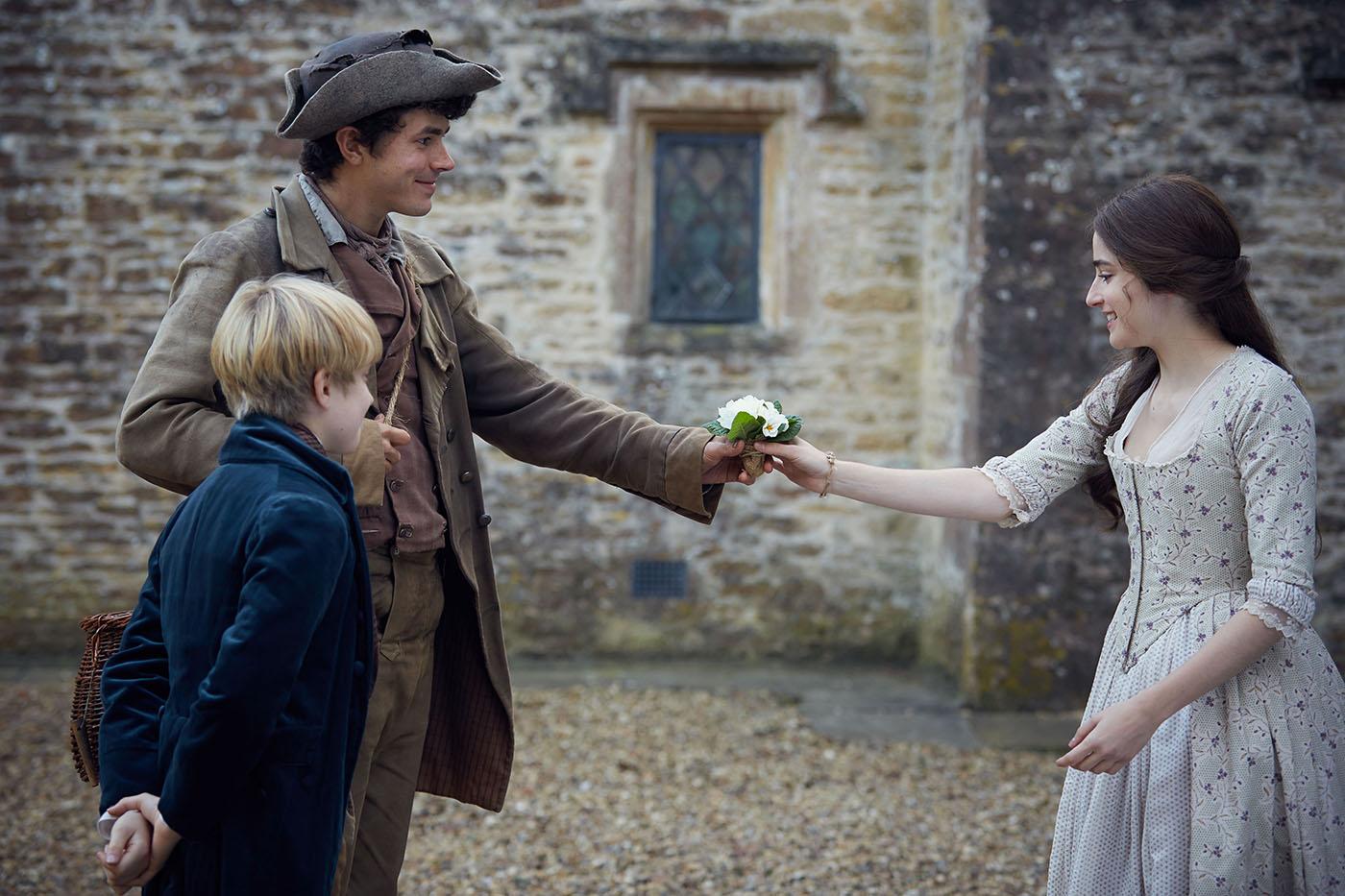 Morwenna's chances with Drake are suddenly and terribly snatched away. Photo: Mammoth Screen for BBC and MASTERPIECE

It is the harshest winter in Cornwall in thirty years, and a failed harvest means the freezing villagers are also ravenous. A shout goes up, and many of them, with any receptacle they can find, scurry away as…

Ross, at the mine, is told that a ship carrying grain, the Princess Charlotte, was ambushed that morning in the cove and its cargo stolen. “That’s what starving people do,” Ross grimly observes. We see many of them being shot by soldiers or trampled in the mêlée.

Cut to George’s court as he is passing harsh judgment on four of the looters. The Princess Charlotte is a Warleggan concern and George has been hoarding grain to jack up prices, so this is personal.

Back at Nampara, a very pregnant Demelza is in the garden digging up potatoes when her labor pains begin. Ross returns several hours later to find her upstairs in bed and in good spirits; she pulls back the covers to reveal a swaddled infant, fast asleep.  She bids him to greet his daughter, “Miss Clowance Poldark.” One look and Ross is in love.

In Truro, George and Elizabeth’s social calendar is filling up – but no invitation from the ungrateful Godolphins. Hoping to lure them, they decide to host a ball for the cream of local society.

Morwenna and Geoffrey Charles have been summoned to Truro for Christmas, to depart on the same day as Clowance’s christening. Geoffrey Charles rushes off to get his present for Drake; Drake and Morwenna are powerfully drawn to each other, but are interrupted by the boy’s return. 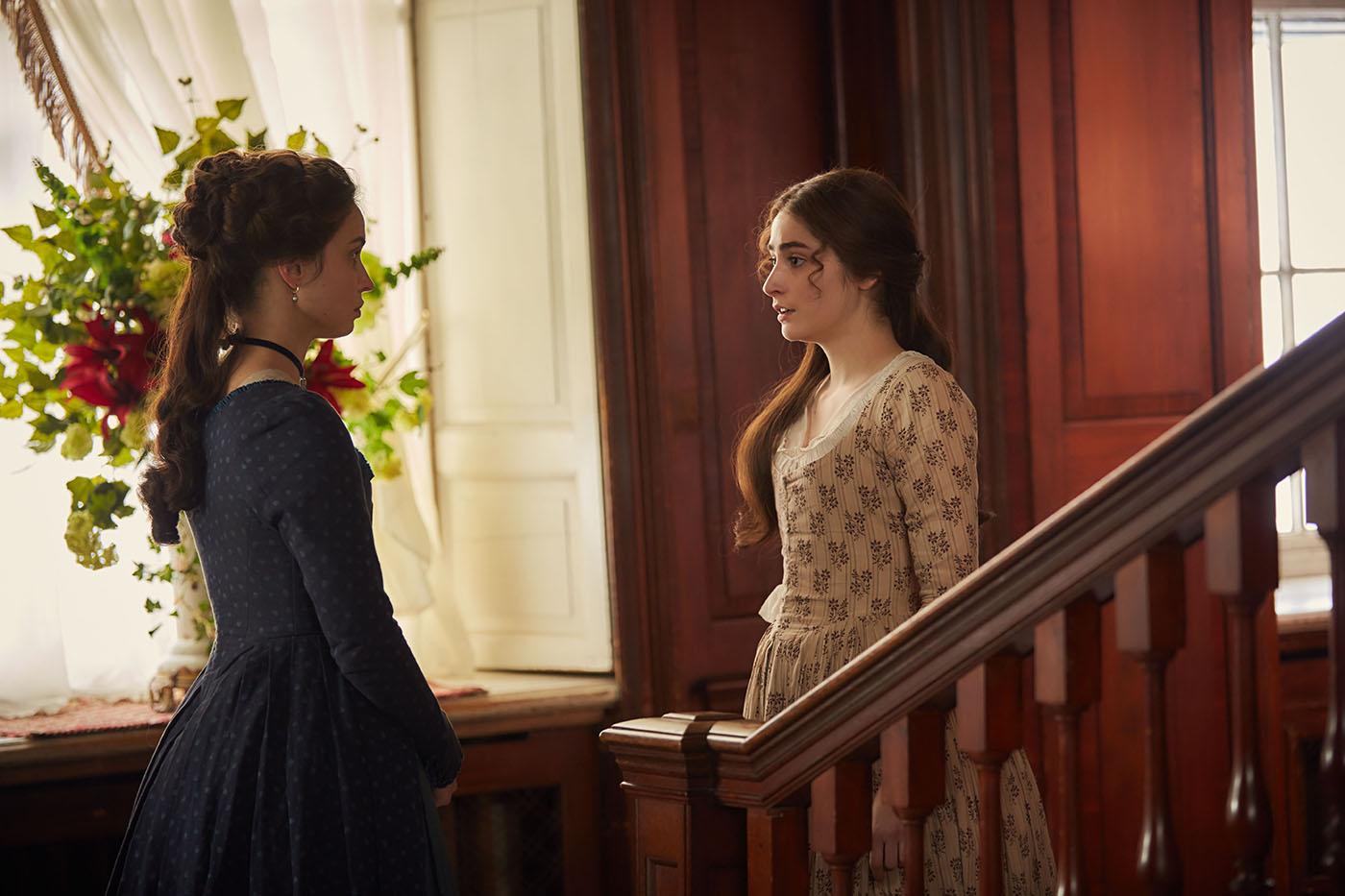 Elizabeth and George don't approve of Morwenna's friendships with Ross's family; she will soon be punished. Photo: Mammoth Screen for BBC and MASTERPIECE

Ross sends Prudie to Trenwith with an invitation to the christening for Agatha, but Tom Harry destroys it. While the ceremony is in progress, there are two unexpected guests: Geoffrey Charles and Morwenna. It’s obvious to Demelza that Drake and Morwenna have formed an attachment, and she gently takes Morwenna aside -- Drake is far beneath her station, so any relationship between them is doomed. Morwenna acknowledges this and tries to break things off with him, but they kiss before she runs off, conflicted.

Caroline, dining with Ross’s family, shares a letter from her jilted fiancé, MP Unwin Trevaunance, who claims to be making progress on Dwight’s release -- until then, she’s been assured that “he receives only the best possible treatment.” Ross, a former of prisoner of war, isn’t buying it.

Cut to Quimper, where Dwight, unwell himself, is doing what little he can for a long line of sick and blood-spattered prisoners when a frail Armitage approaches to ask if he can watch and learn. Wearily, Dwight acquiesces.

Ross, wondering why Agatha never responded to his invitation, rides to Trenwith with Caroline as a buffer. They arrive in the snow to find Agatha bundled in a heavy shawl in a frigid room with no fire -- the servants have been neglecting her. Ross urges Agatha to move to Nampara, but Agatha refuses – Trenwith is her home. Before he and Caroline depart, he berates a maidservant -- he will be checking in on Agatha and she had better be seen to.

George and Elizabeth’s ball is a bit of a bust, with few of the town’s elite in attendance. In a foul mood, George gleans that Morwenna and Geoffrey Charles attended Clowance’s christening, and George vows to send “that brat” to boarding school forthwith. Elizabeth agrees that for allowing Geoffrey Charles to socialize with the Poldarks, Morwenna must be punished. Right on cue, enter…

The Reverend Osborne Whitworth, a rotund, oily, obsequious dandy of about 35, a one-week widower and father of two little girls. George and Elizabeth think they could contrive a “highly advantageous” (for them, anyway) match for Morwenna, as Osborne’s mother is a Godolphin. They make the introduction, and Osborne, his nasally voice full of leering innuendo, asks Morwenna to dance. With George and Elizabeth staring her down, Morwenna has no choice but to accept.

Back at Nampara, the Poldarks and Caroline celebrate Christmas with good cheer and a hearty feast, as a miserable Dwight, Armitage, and other prisoners have their own holiday meal: rats roasted over a fire, to the derision of their French captors. 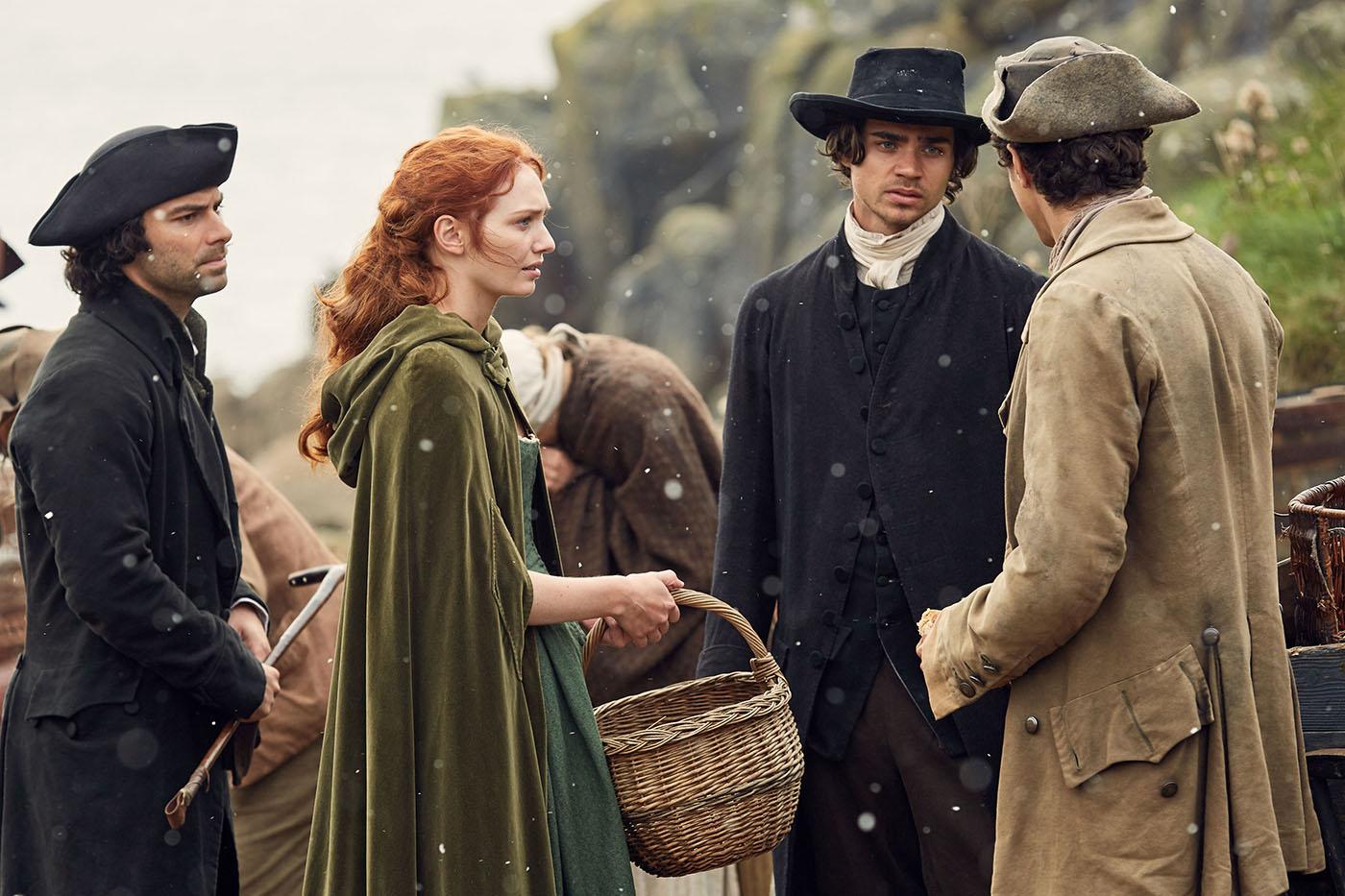 Ross and Demelza, eager to assuage hunger, hatch a plan to help the poor. Photo: Mammoth Screen for BBC and MASTERPIECE

Later, Ross and Demelza distribute bread to the poor while another starving poacher is marched past them to jail. Ross gathers a small group of family and friends to hatch a secret plan: they will smuggle in grain for the villagers and the new meetinghouse, over Sam’s heated objections, will be used as a cache. A large sum of money will be needed to purchase the grain.

Caroline and Demelza, dressed in their best, embark on a charm offensive to solicit funds from the district’s wealthy. Scenes of them smilingly making their appeals are interspersed with George and Osborne haggling over Morwenna’s dowry as if she were prime livestock. In the end, they settle on three thousand pounds, and George, as always content to let others do his dirty work, tells Elizabeth to give the bride-to-be the “happy news.” A tearful Morwenna is incredulous – she barely knows Osborne and had hoped to marry for love. Cynically, Elizabeth informs her that love in a marriage is overrated, and decamps to the next room, where George mentions that Caroline has written asking for 30 guineas for the poor. Elizabeth retorts that, as he just footed the bill for an extravagant dowry, another few guineas for charity shouldn’t bankrupt him.

Caroline and Demelza are happily tallying their donations, including an ostentatious one from George. Now all they need are the goods. It will be a risky undertaking to get them from the cove to the meetinghouse without being ambushed.

The women and elderly create a diversion by bellowing hymns in the meetinghouse as, down in the cove,  the men offload the grain from the cargo ship. As their caravan is furtively making its way through the woods, they are seen (of course) by Tom Harry, who betrays them to George. Hearing that Ross was the ringleader, George is gleeful. He assumes the grain was stolen and will relish watching the constables arrest the whole group in the morning.

Osborne calls on a startled Morwenna, who discovers that not only is he repulsive, but also deadly boring. Eyeing her lasciviously, he tells her she’s been sent by God to “comfort him as only a wife can.” Morwenna is nauseated; Osborne thinks she’s just playing hard to get. He assures her, with coldblooded intensity, that “his love will be returned.” After he slurps over her hand like an ice cream cone, she refuses him and flees. But he is undeterred. Elizabeth, perhaps having misgivings, tells Morwenna she is sending her and Geoffrey Charles back to Trenwith. George sees this as a punishment; Morwenna practically levitates up the stairs to pack.

Jovially, George and Tom Harry fall in behind some unsuspecting villagers on their way to the meetinghouse to collect their share of Ross’s grain. They arrive just as the constables George sent are apologizing to Ross for the false alarm. Caroline and Demelza greet George with big smiles, asking if he’s come to see the “fruits of his generosity” – grain being sold to the needy at half the market price. George, realizing he’s been had, shows his true colors – he had no intention of helping Ross’s “lazy wastrels.” Ross, enjoying himself, points out that George and Tom Harry are trespassing on his land, an actionable offense. In retaliation, George closes Wheal Leisure, Ross’s former mine, throwing 70 men out of work. With the grain venture, Ross has helped some and ruined others. How can he remedy this? 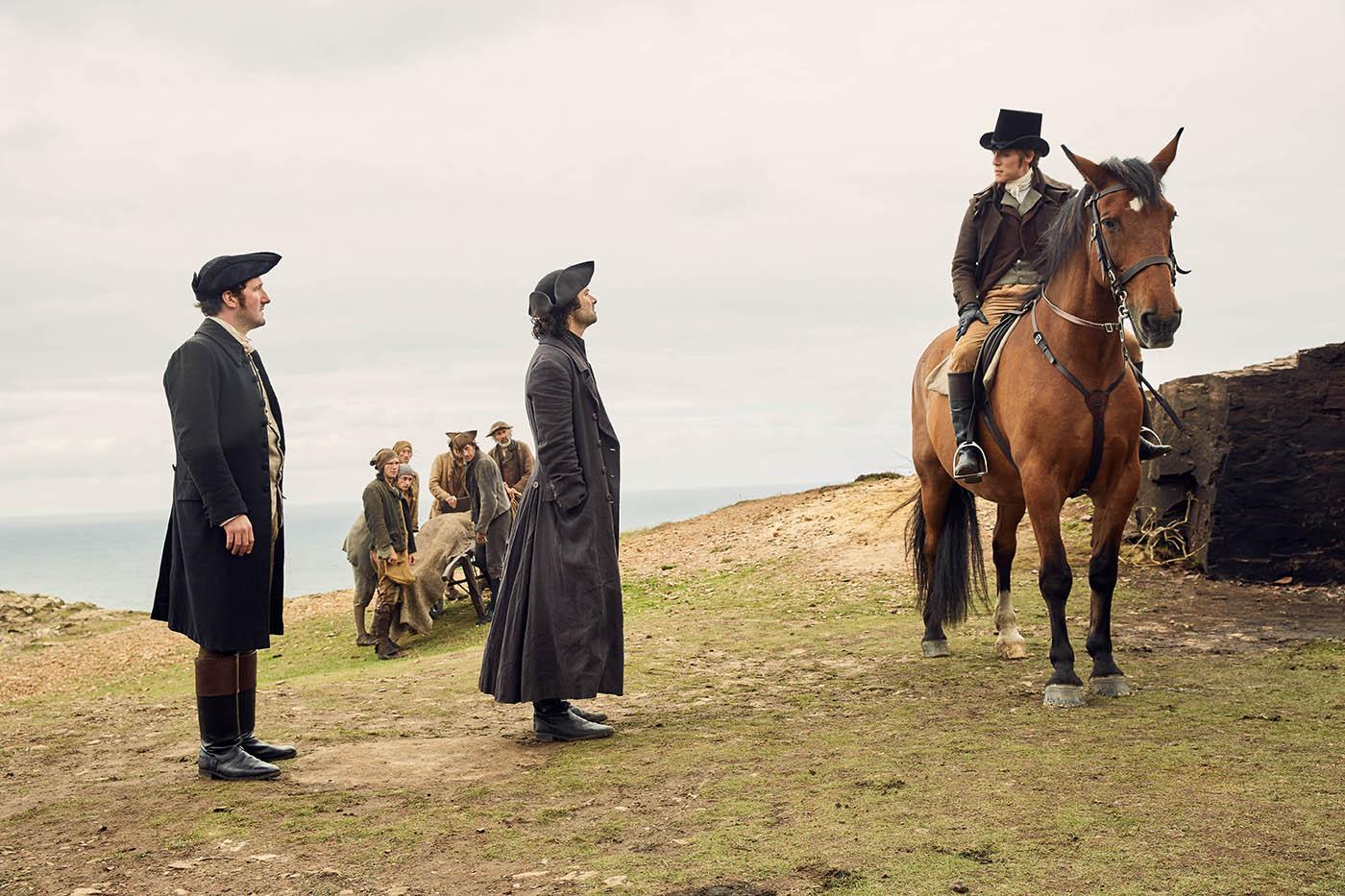 George is infuriated when Ross outfoxes him, and he takes revenge on some of Ross's beloved mine workers. Photo: Mammoth Screen for BBC and MASTERPIECE

Caroline excitedly announces that she is off to London; Unwin has instructed her to go to the Admiralty to negotiate a ransom for Dwight. Ross is deeply skeptical -- he knows the Admiralty doesn’t deal in ransoms.

Meanwhile at Quimper, an ever-stoic Dwight, drooping with exhaustion, is treating his lone surviving shipmate Williams, who is slowly improving. A group of guards are whooping it up in the corner, taking bets on which prisoner will be the next to die. As Dwight gives Williams some water, one of them yanks him from Dwight’s arms and shoots him dead. The guard laughs – he has won his bet. Dwight, at the end of his endurance, breaks down in sobs.

Ross manages to hire many of Wheal Leisure’s out-of-work miners at great cost to himself and Demelza. In other news, Drake is overjoyed when he encounters Morwenna returning from Truro.

Back in Truro, discussing Morwenna’s marriage, Elizabeth confesses to George that Osborne makes her skin crawl. George concedes that the man is a reptile, but also a Godolphin -- “Morwenna doesn’t realize how lucky she is.” At the vicarage, Osborne evidently thinks so, too…he is being measured for new tight-fitting breeches, to inspire in his soon-to-be-bride “awe and anticipation.”

As waves crash on the beach and Morwenna runs into Drake’s arms, it’s safe to say that Osborne is the last thing on her mind.

To play the role of Osborne, actor Christian Brassington had to pack on more than 30 pounds. He revealed that he accomplished it by consuming 3,500 calories a day…mostly “ice cream and beer.” Hopefully, he thinks it was worth it to play a character who, during the airing of the 1970s incarnation of Poldark, was widely considered “the most hated man in England.”