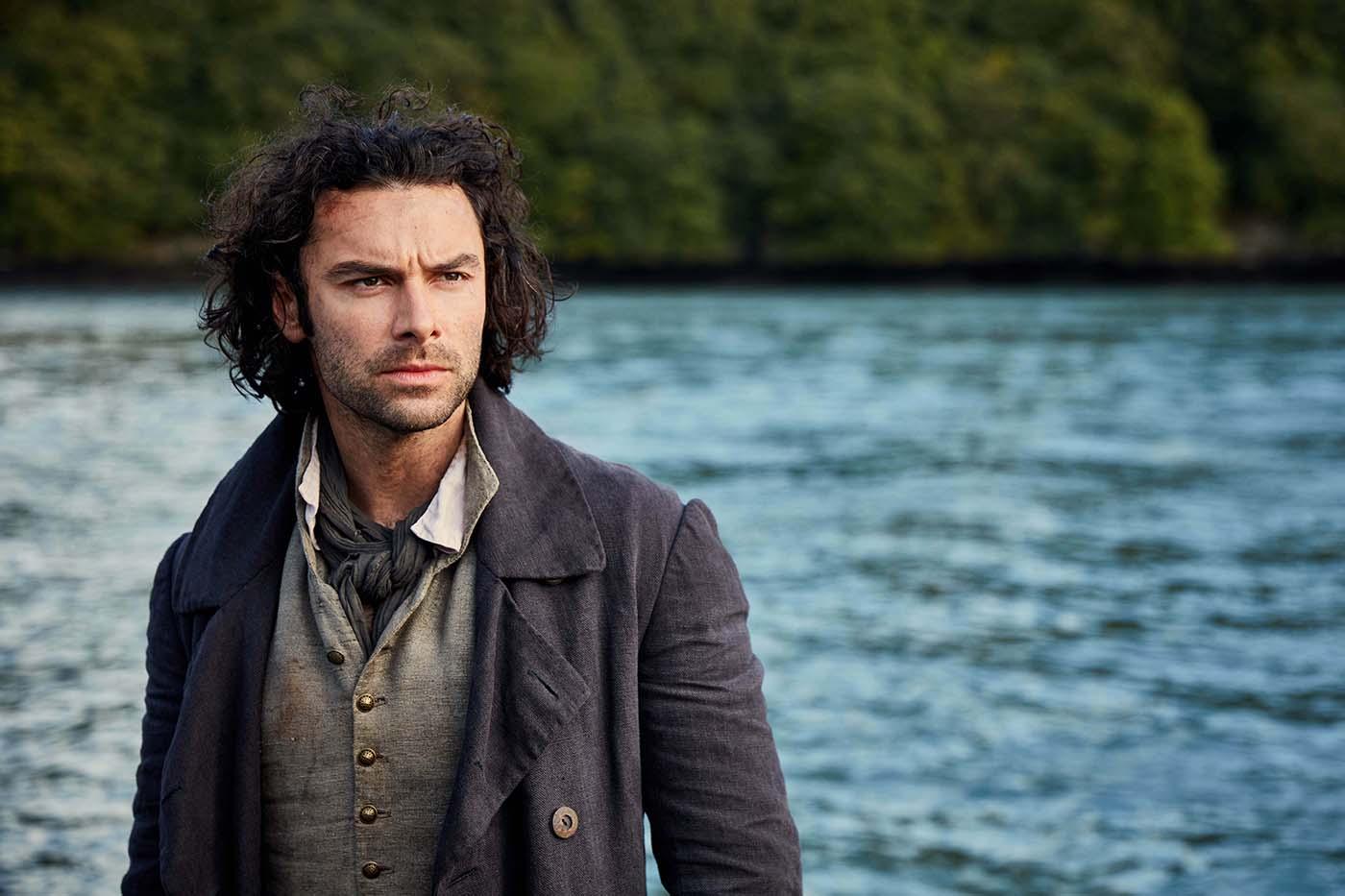 We open on Ross and Demelza on the bluff with their children, discussing a proposed royalist offensive that will, according to a naively optimistic Caroline, put down the revolt and free Dwight and other English prisoners. Ross is uneasy. With good reason, as…

At Quimper, misery reigns. There are notably fewer prisoners, and those who remain are skeletal. A glazed-over Dwight is still striving in vain to save the ones he can. He confides to Armitage that he doubts that he will see Caroline again.

In Truro, George is not having a good day: Valentine has been diagnosed with rickets, Ross is rumored to be running for Parliament, and their invitation to Lord Falmouth’s party is apparently lost in the mail. Osborne’s mother could get them in, but Morwenna, exiled to the country weeks ago, is still vacillating about Osborne’s proposal. Surely, George rants, Morwenna must be “out of her mind with boredom.”

Hardly. Cut to Trenwith, where she, Drake, and Geoffrey Charles laugh uproariously as Drake offloads a basketful of live toads into George’s pond. In the study, Agatha turns over The Lovers tarot card (a bad omen) as she spies Morwenna canoodling with Drake on the lawn. Later, Agatha cautions the girl about what George will do to Drake (“kin to Ross!”) if he learns of their attachment; for his sake, she must give him up. Morwenna bravely lies to Drake: she does not love him. Drake is devastated. 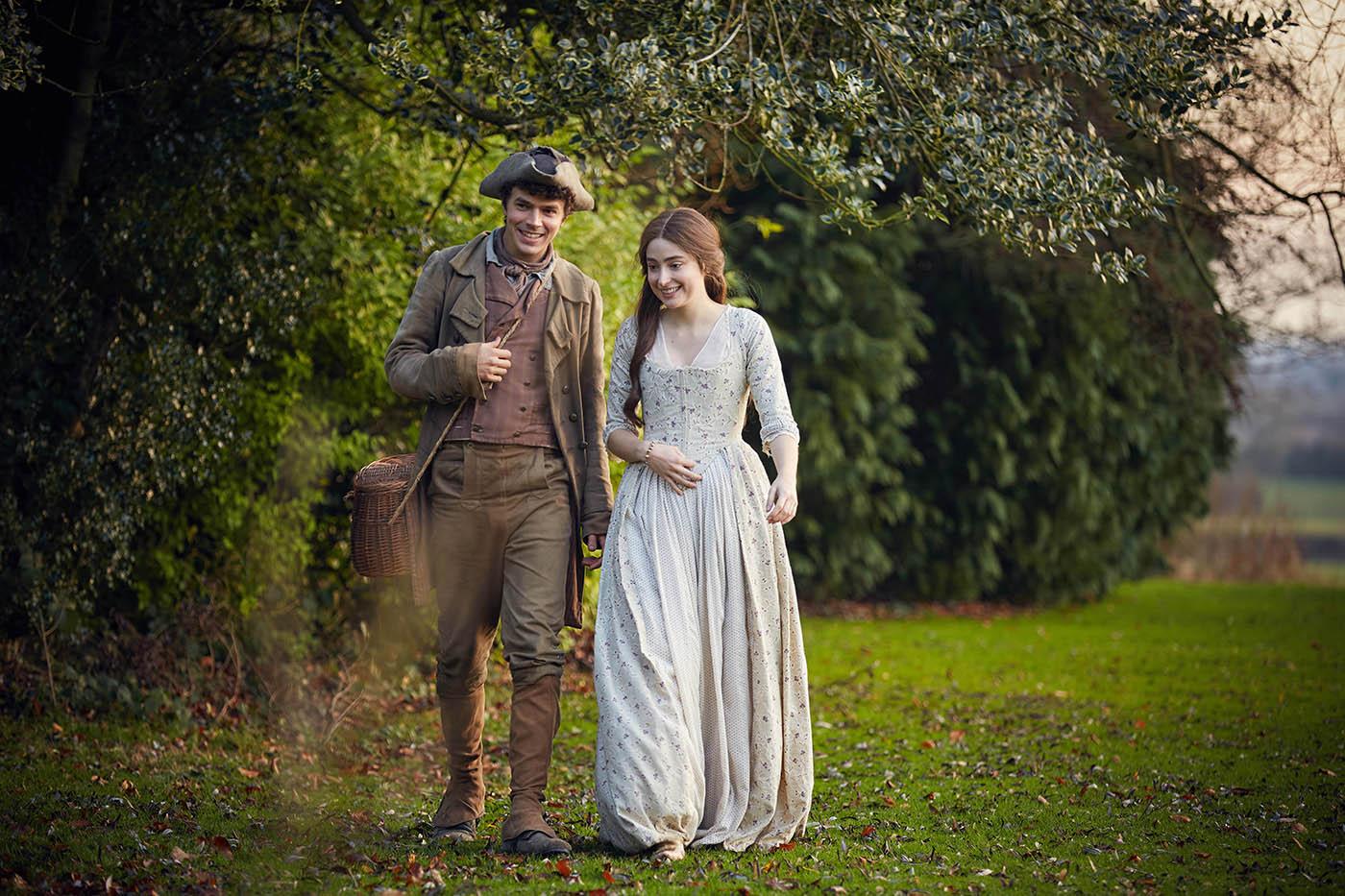 Morwenna is struggling to end things with Drake in the face of class difference and George's animosity towards anyone associated with Ross. Photo: Robert Viglasky/Mammoth Screen for BBC and MASTERPIECE

At the mine, Zacky Martin shares more bad news: a prisoner just released from Quimper tells of the remaining detainees being “executed for sport.” Flash to Quimper, as another sickly man is wrenched from Dwight’s grasp – a roll of the dice, and bang! One more gone, this time because of his eye color. “A new entertainment has begun,” Dwight dully remarks to Armitage. Subsequent killings barely elicit a reaction from either of them.

Ross’s decision is made: he must act now. He outlines the plan to an apprehensive Demelza: he, his friend Henshawe, Tholly, and Zacky will hitch a ride with the royalist fleet to France, and, in the chaos of the landing, storm the prison and bring Dwight home. “What could be simpler?” Ross asks, poker-faced. He rides over to tell Agatha, who is all giddy excitement, urging Ross to hurry back in time for her 100th birthday party.

That night, Ross bids a poignant farewell to Demelza, after which a heartbroken Drake pours his heart out to her; she advises him to buck up and “find a purpose.” The wheels turning in his head, Drake promises that he will.

On board the ship about to embark for France, Ross and his group eavesdrop on some of the would-be royalist invaders and quickly deduce that they are a disorganized rabble. They disembark and get Ross’s smuggler friend to loan them his ship. Now on their own, a stowaway is revealed: Drake, who has evidently found his “purpose.” Ross is annoyed by this additional burden.

At Killewarren, Demelza lies to Caroline about Ross’s whereabouts. Caroline, happy for a distraction, is attending Lord Falmouth’s society soirée and pleads with Demelza to be her plus-one. Girls’ night out! 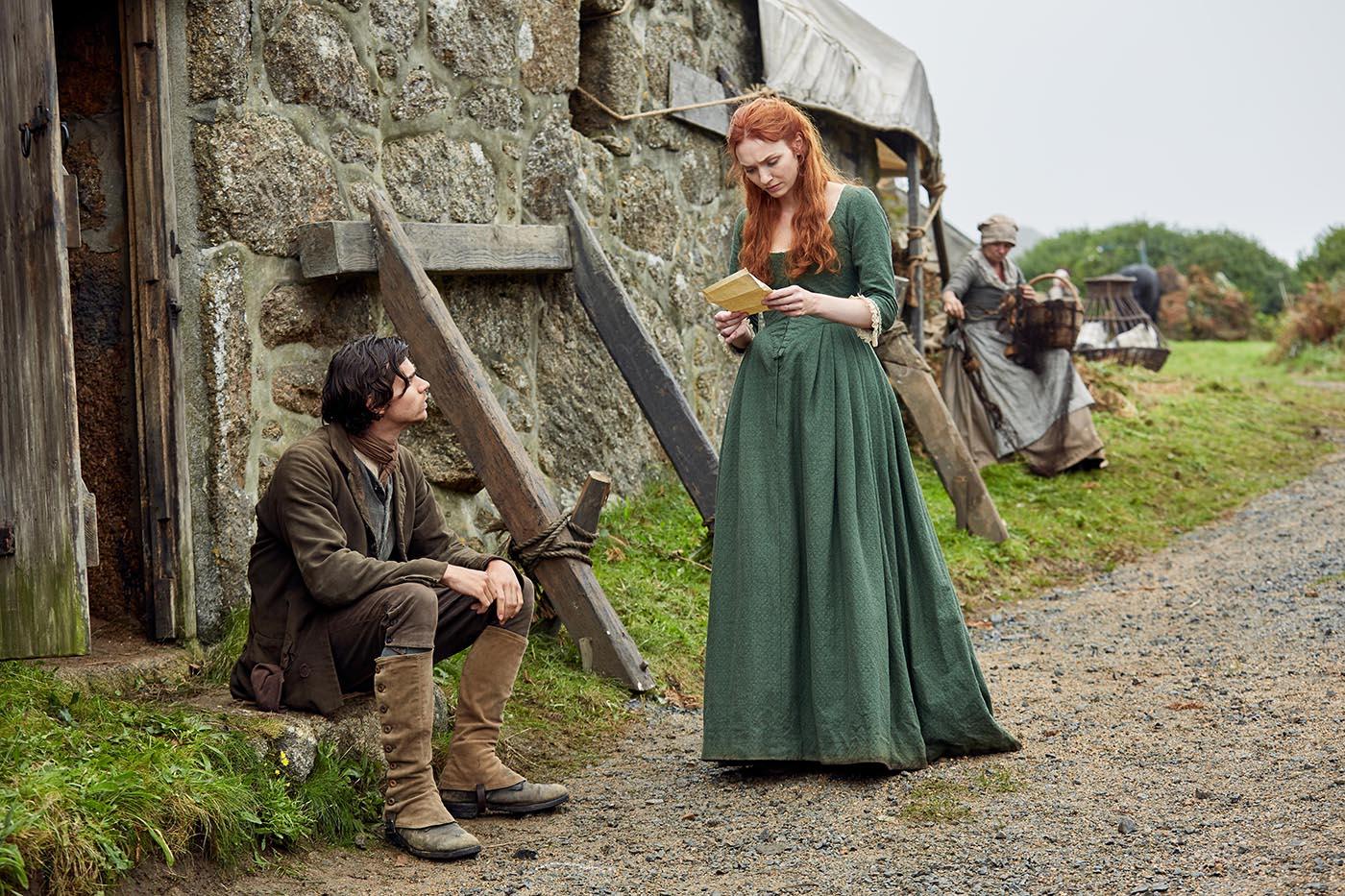 As usual Ross is leaving Demelza with worries, a home, and a family to take care of in his absence. Photo: Robert Viglasky/Mammoth Screen for BBC and MASTERPIECE

Osborne has managed to snag an invitation for George and Elizabeth, with a string attached: Morwenna’s acceptance of his proposal. Tom Harry spills the beans about Ross’s “reckless” mission, and George is delighted to have some juicy gossip to spread at Lord Falmouth’s party that will doubtless derail Ross’s bid for Parliament. Elizabeth Laudanum…er, Warleggan…is conflicted (her normal state).

George, Elizabeth, and a reluctant Morwenna arrive at the party, and Caroline and Demelza embark on their own mission: to gather intelligence about the Royalist landing. George tries in vain to get Lord Falmouth’s attention, and is reduced to wandering from clique to clique, pushing his “Ross Poldark’s reckless assault on a French prison” story. Lord Falmouth and his cronies are unimpressed, and Demelza, anxious that Caroline should not hear, steers her away. Osborne approaches Morwenna and, undressing her with his eyes, slyly accuses her of being a tease. Ugh…

Ross and company, now in a rowboat, have made it to the French coast. As they approach the prison in darkness, Ross gives the men a final chance to back out; none take it. Posing as a prisoner, Ross is marched to the gate by Tholly, hollering orders in French. As the doors open to admit them, they overpower the sentries and summon the others from the shadows.

Now inside, after they neutralize more guards, an anxious young prisoner reluctantly directs them to Armitage, who leads them to an almost catatonic Dwight. Barely comprehending that Ross and the others are real, Dwight refuses at first to abandon his sick charges. But as Armitage is convincing him to go with them, Anxious Young Prisoner panics. “ESCAPE!” he screams. And the game is on. 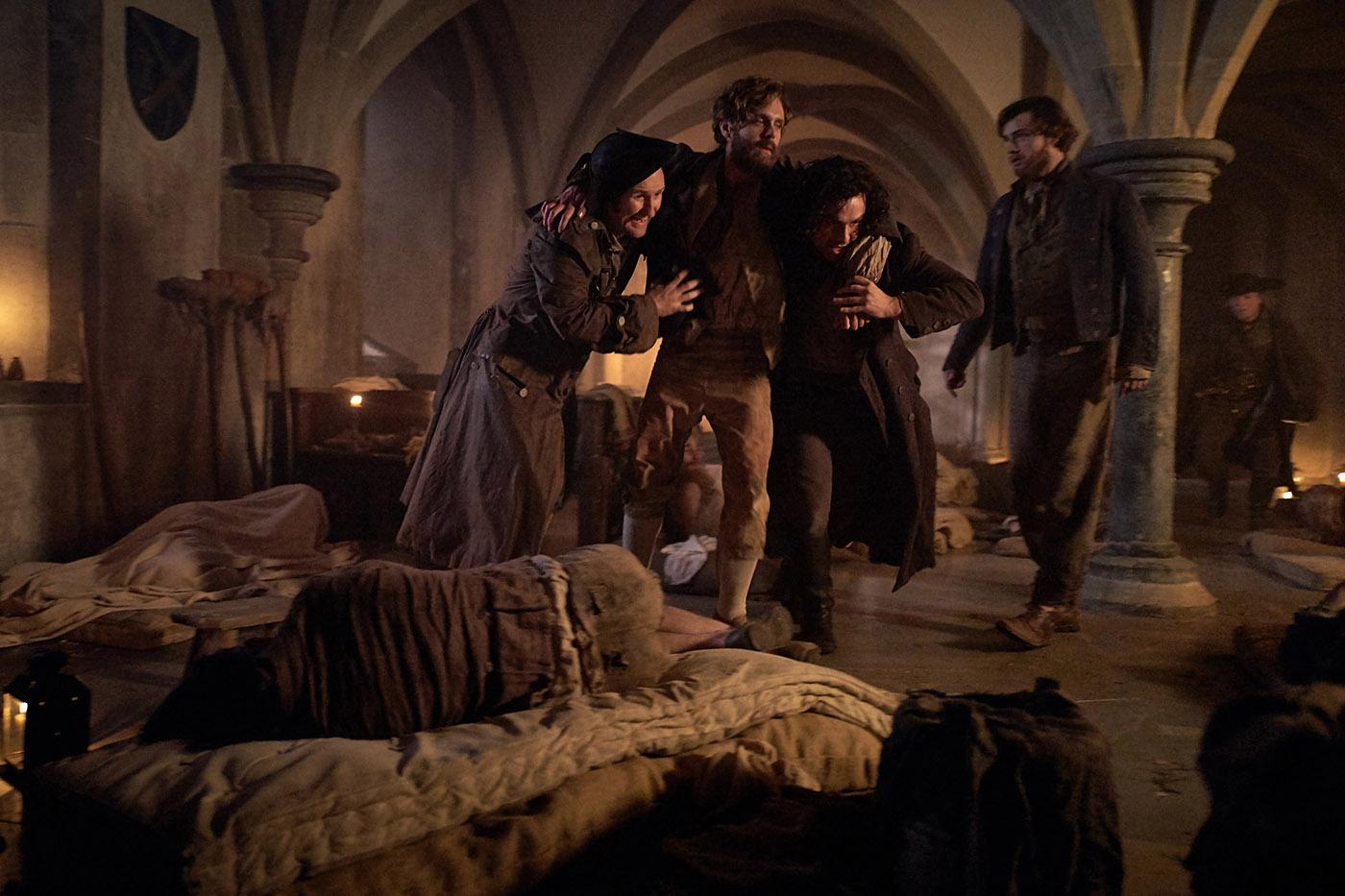 As the group propels Dwight to the exit ahead of the inevitable stampede, they find it already blocked by two guards, looking away. Drake and Ross climb onto the roof and, on cue, drop on top of them, knocking them out. As they hurry to the prison gate, they find it latched from the outside, and with more guards closing in, Henshawe suddenly produces some dynamite from the mine. BOOM! No more gate! But in the ensuing gun battle, Henshawe is hit, and as Drake is helping to drag him out of the line of fire, he too is shot, in the shoulder. The rest manage to get the two wounded men into the woods, but Henshawe is done for. As he dies, a devastated Ross blames himself. But they must leave him and soldier on.

Back at Lord Falmouth’s party, Elizabeth has determined that disparaging Ross’s mission is tactless – she has learned that Lord Falmouth’s nephew, a Navy lieutenant, is a prisoner of war. Petulantly, George concludes that the evening has been a failure. Sulking, they depart as Caroline, distraught, informs Demelza that the royalist landing has failed. What hope is there for Dwight now?

Ross’s group is being trailed through the woods by a solitary armed figure. Dwight recognizes him: it’s Armitage, with news of the Royalist landing’s failure: if they’re caught now, “there will be no escape, no mercy.” He falls in with them and together they make it back to the boat. Ross is wracked with guilt about Henshawe’s death, Drake’s life-threatening injury, and having risked his friends. Tholly spots their ship waiting in the distance, and they row toward it for all they’re worth.

Cut to the ship’s hold, where Dwight is caring for an unconscious Drake. Bleary-eyed, he thanks Ross for rescuing him and thinks Drake will make it, but is despondent that he made it out alive when so many others did not.

Sam arrives at Nampara with great news: Ross’s ship has returned! He and Demelza race down to the cove for a joyful reunion as a relieved Morwenna watches from the bluff. Armitage and Demelza meet as she weeps over the loss of Henshawe. 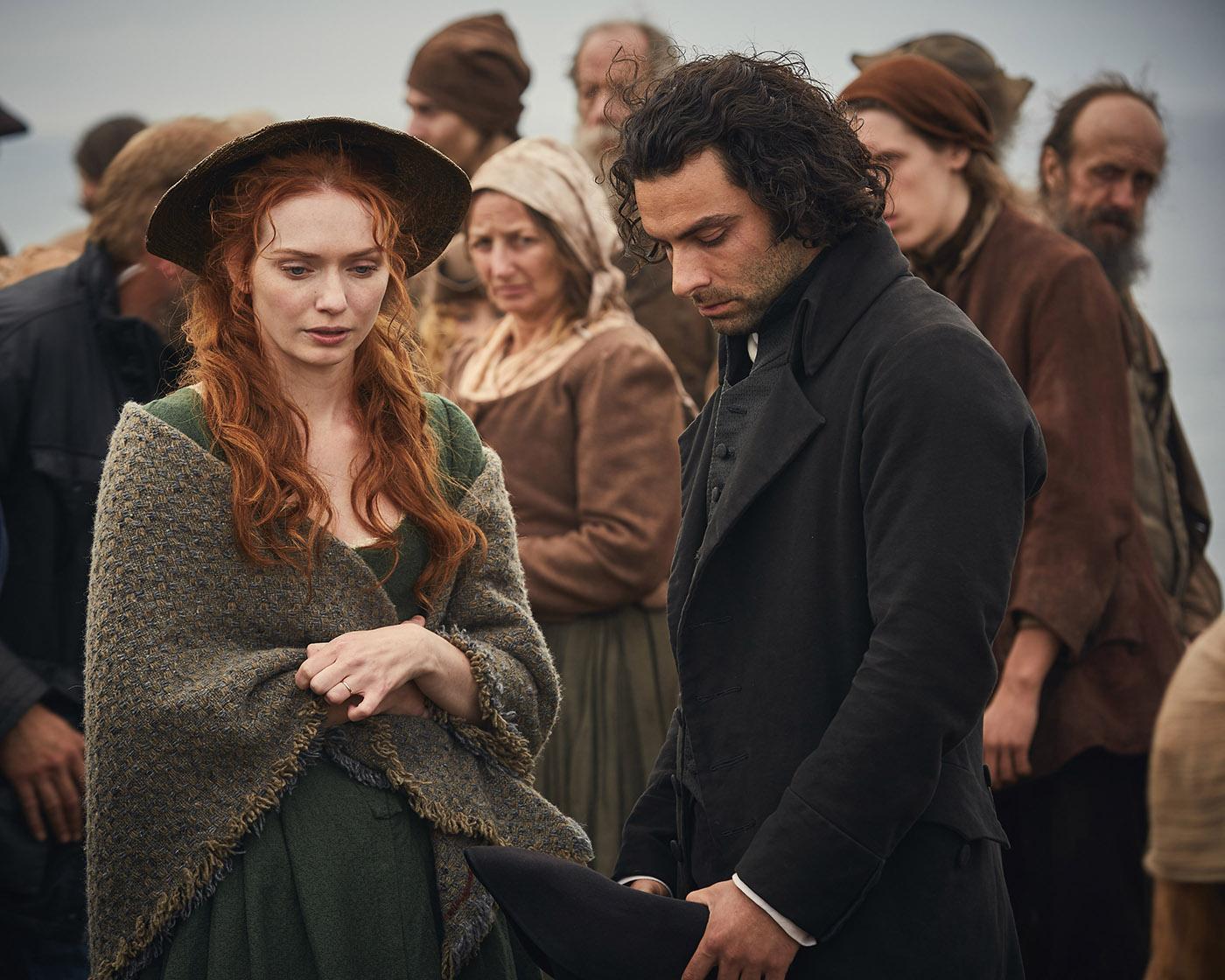 Dwight has been saved, but not without losses. Photo: Robert Viglasky/Mammoth Screen for BBC and MASTERPIECE

At Trenwith, Tom Harry reports to the Warleggans that Ross has successfully rescued not just Dwight (“as expected,” sniffs Agatha; Geoffrey Charles is thrilled) but also “Lieutenant Hugh Armitage,” who, as Elizabeth discovered at the party, is Lord Falmouth’s nephew. George grimaces: Ross has done it again!

At Killewarren, Demelza asks Caroline if she feels “strong enough for a small surprise.” Evidently she does. Arriving in haste at Nampara and taking in Dwight’s condition, Caroline jubilantly prescribes “fresh air, oranges, and kisses without end” – wasting no time in putting the third part into practice.

That night by the fire, Demelza watches over a sleeping Drake. Ross, cradling Clowance, acknowledges that Drake likely saved his life, so he must learn to value him as much as Demelza does.

Cut to a month later, and Henshawe’s poignant funeral on the bluff. Among the many mourners gathered around his grave is Armitage, who cleans up exceedingly well. Demelza, Sam, Drake, and Prudie harmonize on a beautiful hymn. Marginally healthier, Dwight looks haunted. Afterward, Armitage thanks Ross for his rescue; Demelza hopes he will take full advantage of his liberty. Meaningfully, he replies, “I intend to.”

The four actors (Demelza, Sam, Drake, and Prudie) at Henshawe’s memorial are doing their own singing; the hymn is “No Greater Love,” with lyrics by scriptwriter Debbie Horsfield, based on John 15:13.

Armitage is played by Josh Whitehouse, known as the face of Mr. Burberry, the men’s fragrance. Make of that what you will.