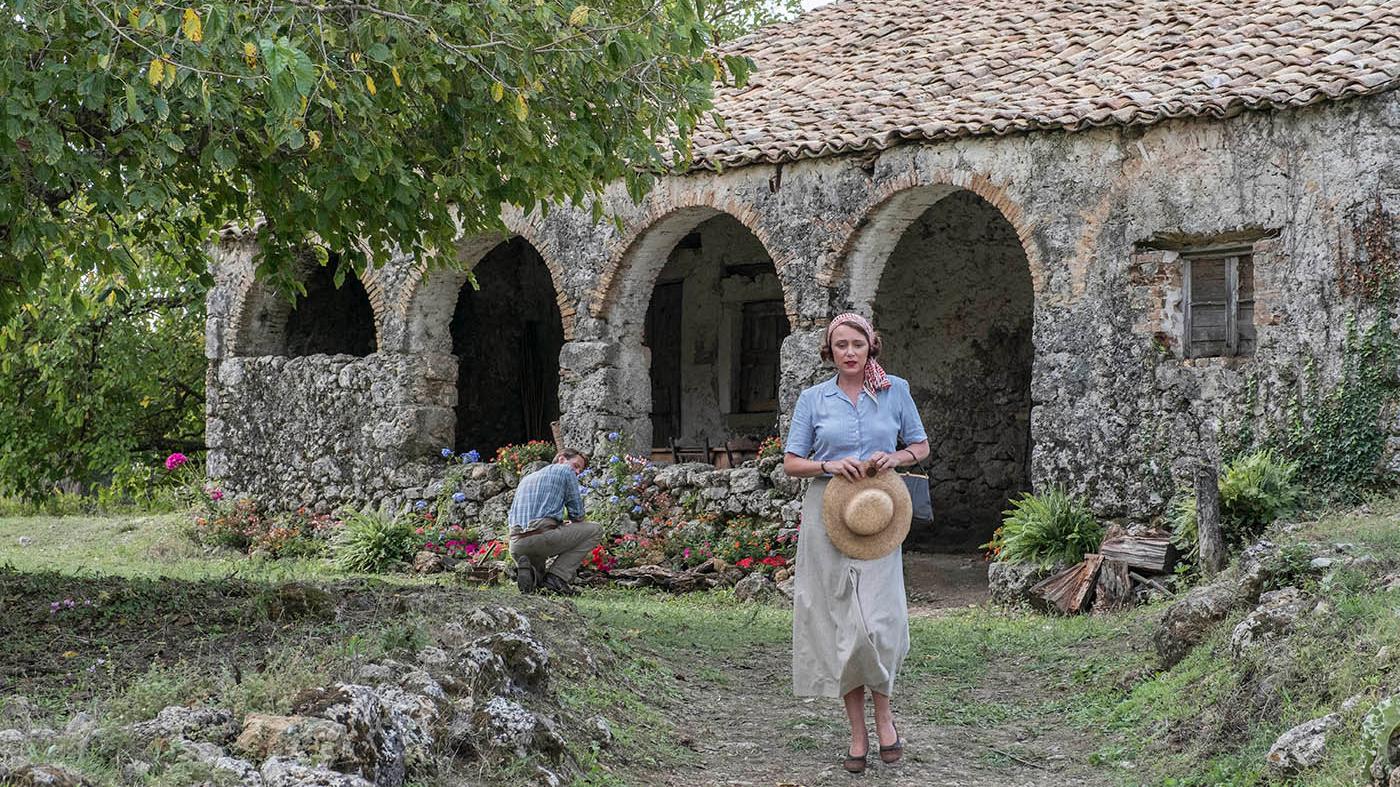 Louisa is having a mid-life crisis. Photo: John Rogers/Sid Gentle Films for ITV and MASTERPIECE

Louisa is having a mid-life crisis. Her birthday is approaching, and she’s suddenly feeling old. Her children don’t help: Margo and Leslie think she’s somewhere around 50 years old, while Gerry envisions her as a great, slow-moving turtle. Add in the fact that Larry has moved out and the rumors that Sven has a pretty young girlfriend, and Louisa is really worried that she’s past her prime.

She at least has the over-the-top attentions of Hugh to perk her up a bit. After dropping off baked goods at Larry’s decrepit mess of a room – “Hemingway’s parents don’t bring him food,” he complains, but given Larry’s ineptitude, he’d probably starve without it – she goes for a ride in Hugh’s bright-red, over-compensating sports car. They stop in a grove on the coast and Louisa asks about Vasilia. Hugh says she killed a lover – or at least he died, or something. He chuckles.

Back into the car – but it won’t start. Luckily, Spyros had heard the sad state of the car’s engine in town and followed to rescue the couple. “I suggest you buy more reliable transportation. Like a donkey,” he says. An ass would fit Hugh well. 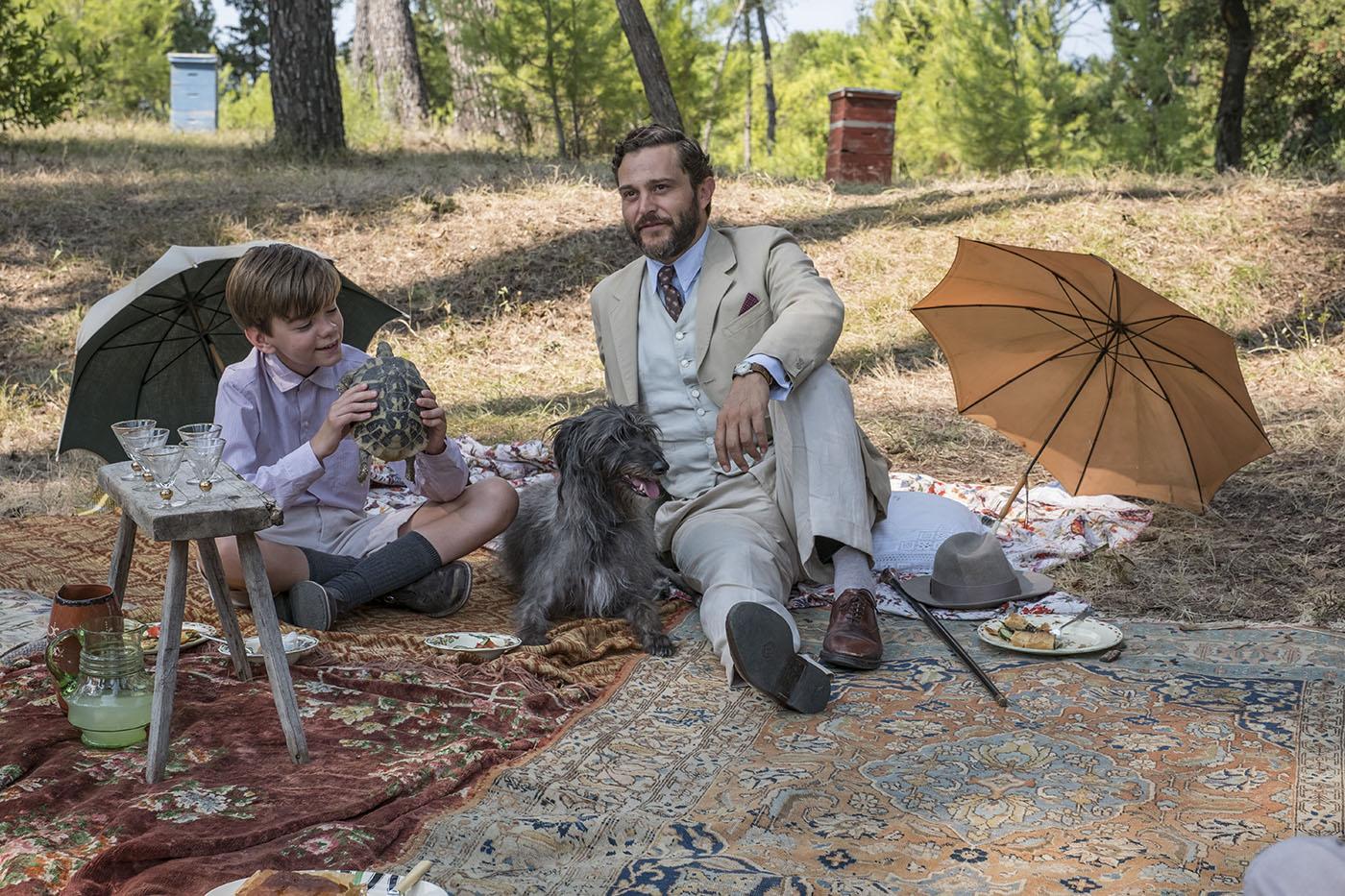 Gerry tells his mother he thinks of her as a slow-moving turtle, while Theo gives her a fossil for her birthday, neither of which help her feel better about her age. Photo: John Rogers/Sid Gentle Films for ITV and MASTERPIECE

Meanwhile, Margo has forced Gerry into a suit for his first session with his new tutor, but Gerry is more concerned with whether his otter is pregnant than with learning French. While Gerry is occupied, Leslie takes his place as Theo’s assistant, learning to use a camera and develop photos. And thus is born his latest professional venture: becoming a photographer. “It’s all the fun of shooting with a gun, and you get a photo!” he exclaims.

After the children throw a pathetic birthday picnic for Louisa – it’s beset by ants, unkind remarks about her age, and an absence of guests other than Theo, who unwisely gifts her a fossil – she visits Sven to unsubtly ask about his girlfriend. He doesn’t respond, but does ask about “Huge.” Hugh would probably like the name – another form of compensation.

Louisa isn’t the only one preoccupied by Sven. Hugh wants to know the real reason he and Louisa never married. He asks Leslie, who reveals that Sven is gay. In return, Hugh poses for a portrait by Leslie, complete with watermelon as prop.

Leslie wants to practice his craft on Margo, but she’s taken to wearing a veil to hide her “spots” – she’s breaking out and afraid that the pimples will prevent her from finding a boyfriend. But her appearance isn’t the only thing embarrassing her: Louisa has taken to wearing a modish new outfit meant for a woman in her twenties. Margo buys her a plain, baggy black smock to give her mother a hint, perhaps overcorrecting a bit. “Good. Like mine,” Lugaretzia says. 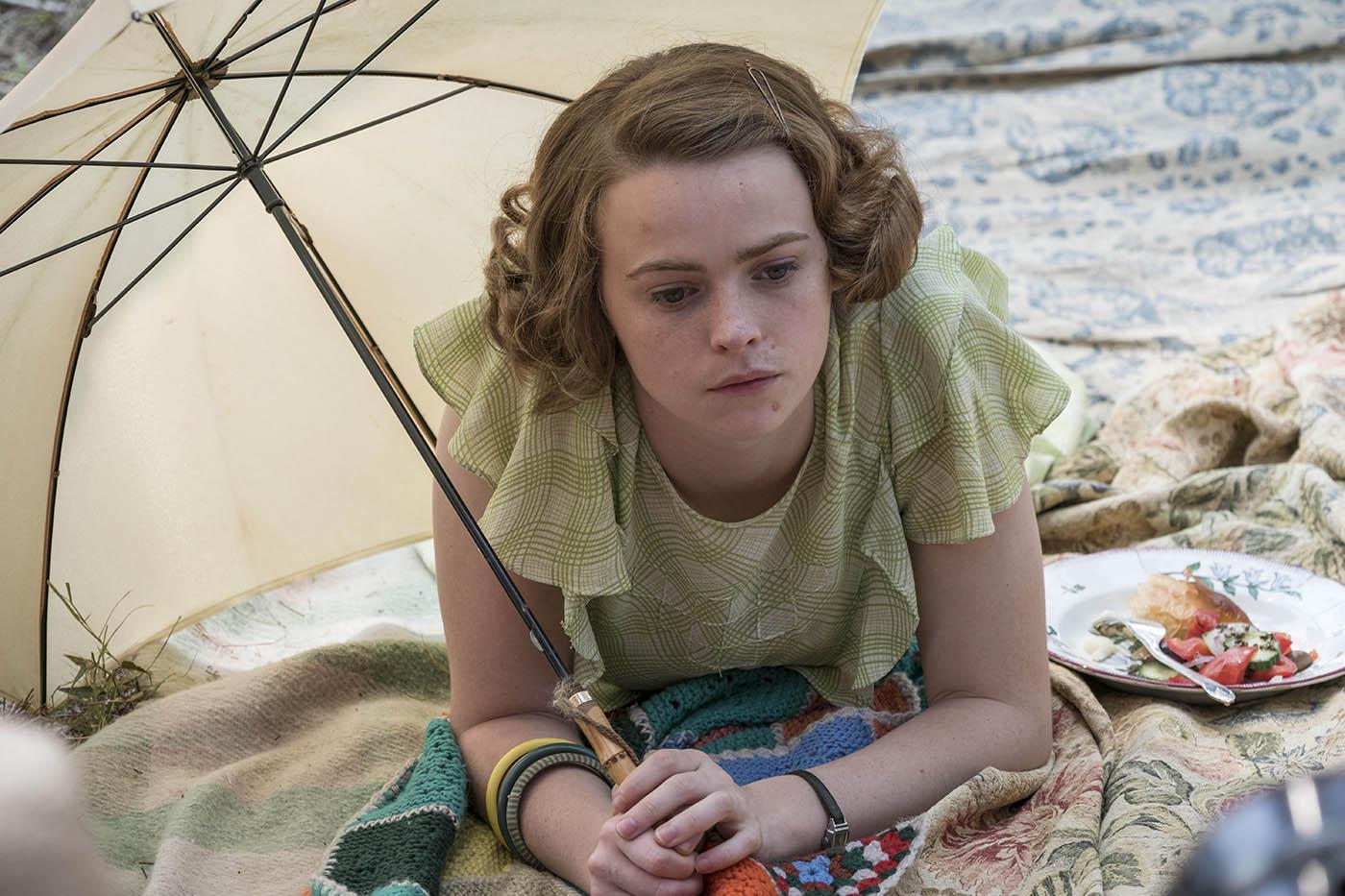 Margo is breaking out and afraid she'll never find a boyfriend. Photo: John Rogers/Sid Gentle Films for ITV and MASTERPIECE

Louisa ignores the hint and modifies the smock into two separate, tight dresses. Apparently too tight: when she bends over to pick something up in town, the dress splits. She seeks refuge in Larry’s apartment, where she encounters a scene that makes her feel even older, and more worried. Coming through the open door, she discovers Larry sprawled naked in bed with a woman: Vasilia. Larry was no match for the fiery landlady, especially once she barged into his room, ripped open his shirt, and kissed him.

Vasilia flaunts her beauty while making dismissive comments about Louisa, forcing the mother to abandon her son to the lover. Later, Vasilia arrives at Louisa’s home for the rent and continues her offensive, offering a vicious bargain: if Louisa will give up Hugh, Vasilia will give up Larry. Back in Larry’s apartment, while lying coquettishly in bed, Vasilia pushes her advantage and tells Larry they should get married.

Miserable, Louisa once again visits Sven and sees him with a man and his supposed girlfriend. He admits that the girl is simply an old friend visiting from Sweden, while the man is his real lover.

Back at home, Leslie offers to take a portrait of Louisa. When she sees her girlish outfit and poses in the photos, she is horrified. She makes Leslie try again, ordering him to capture the Durrells as their true selves: Larry in his artist’s beret, Louisa in proper clothes, Gerry with animals. 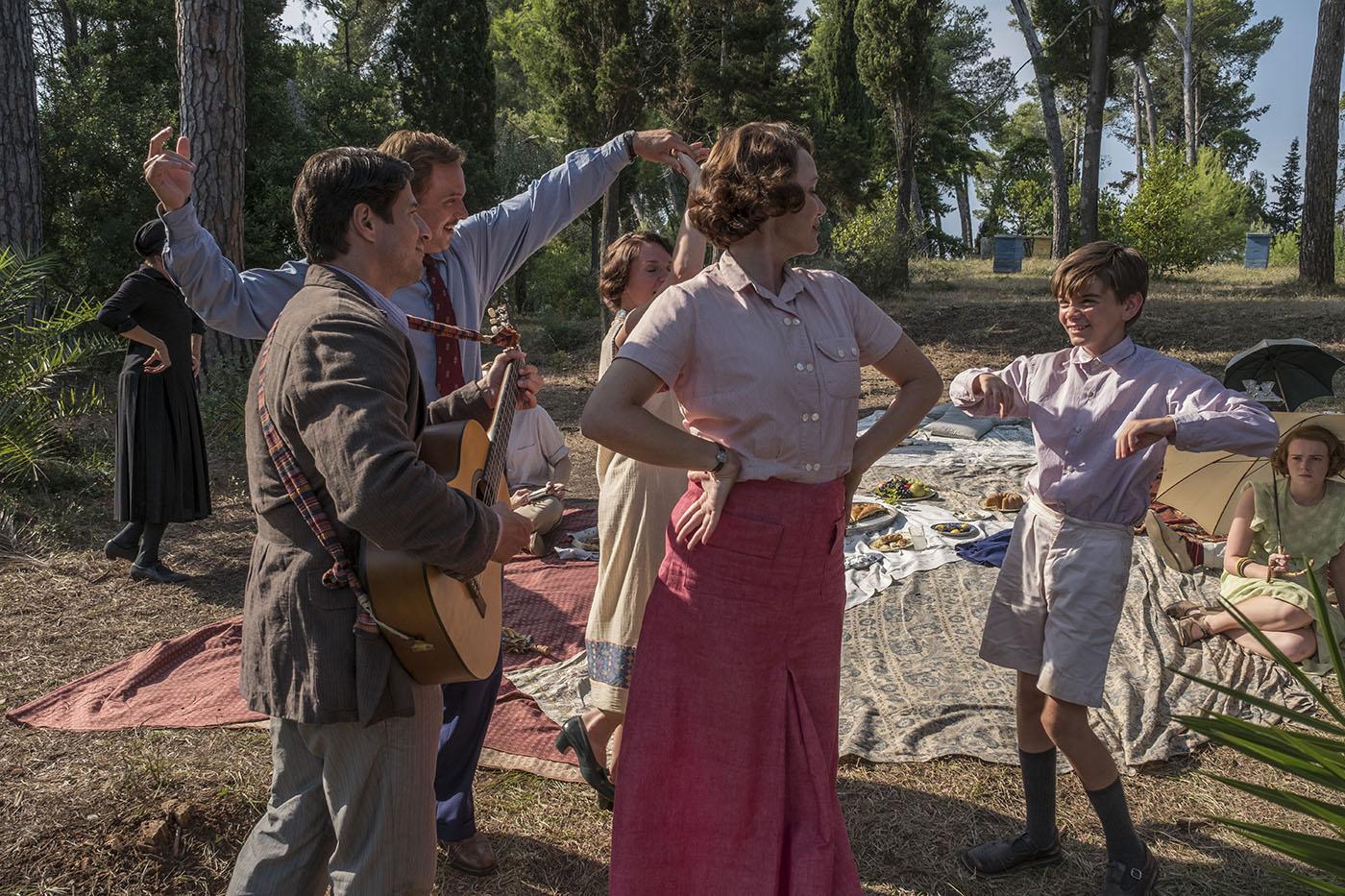 Louisa finally accepts herself and her age, and the family has another go at a partyPhoto: John Rogers/Sid Gentle Films for ITV and MASTERPIECE

Gerry also no longer has to see his tutor: while distracting the old man from teaching by asking about his life, Gerry tackled and injured him when the scholar told a story about wrestling and offered to demonstrate his technique. Fortunately, a replacement has arrived: Donald has returned and needs lodging. Louisa offers him Larry’s room in exchange for tutoring Gerry.

Now that Louisa has begun to accept her age, the family has another go at a birthday picnic. This time, it’s a full-on party, with many more friends in attendance and rollicking music by Sven and Spyros. While everyone gathers for a group photo by Leslie, Louisa and Larry exchange tense comments about his newly independent life. Frustrated by Louisa’s insistence that he still relies on her, Larry makes a spontaneous decision to spite her. He announces that he’s marrying Vasilia. The whole group gasps. The camera flashes. Everyone’s shock is immortalized on film.