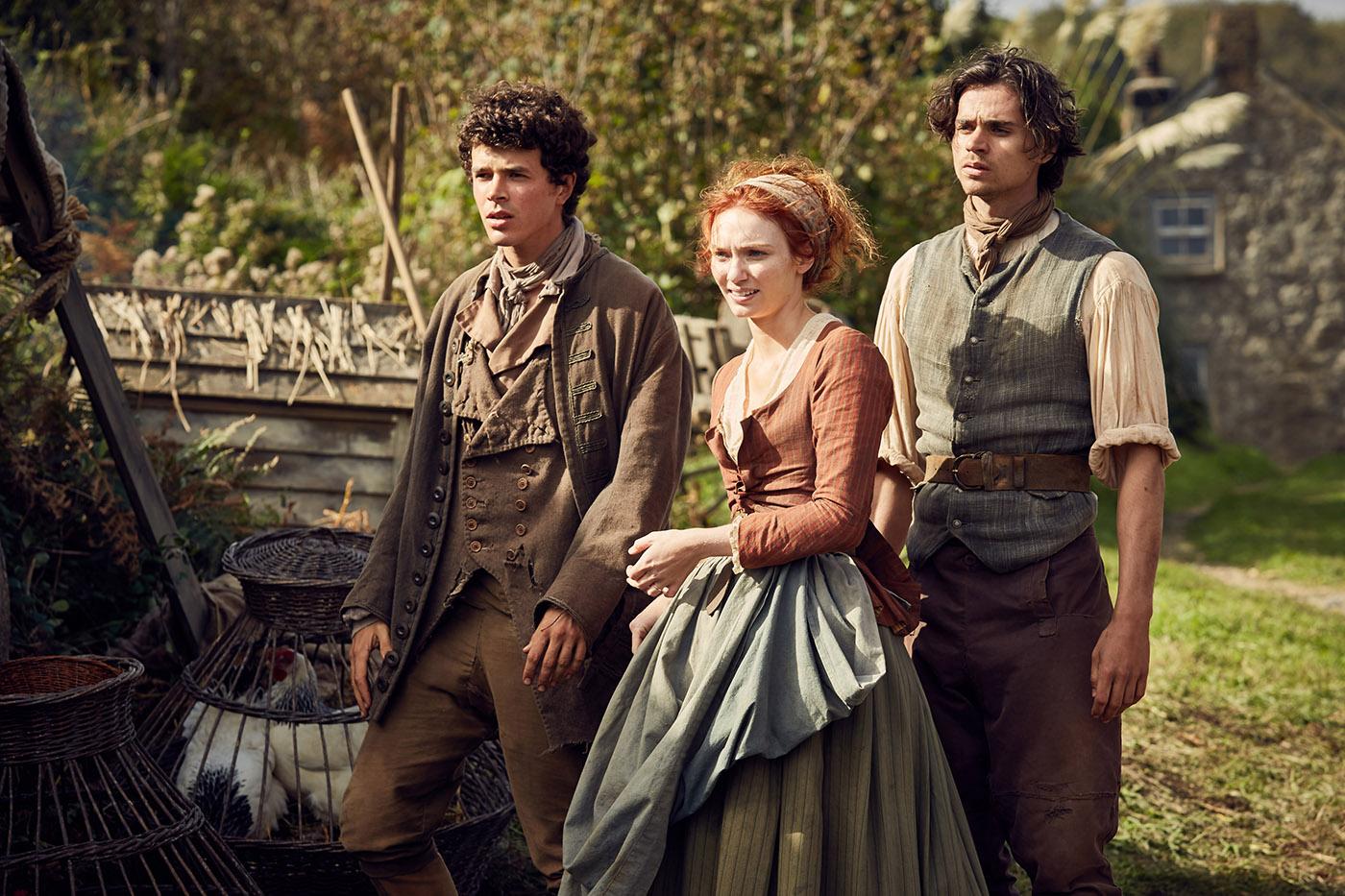 A beautiful summer morning at Trenwith. George and Elizabeth are eating strawberries in bed, and life is good. Only one fly in the ointment: Morwenna is still dragging her feet about Osborne’s proposal. Meanwhile, Drake, still smarting from both his shoulder injury and Morwenna’s rejection, intends to leave Cornwall.

Ross pays his usual visit to Agatha, not realizing the Warleggans have returned. Once he finds out, he quickly bids Morwenna to look after his aunt and gallops off down the drive. Upstairs, George hears something…

Cut to Killewarren, where Dwight, signs of scurvy still visible, is having terrible flashbacks. A well-meaning Caroline tries to divert him with various frivolities, but Dwight only wants to be left alone. Demelza pays a friendly call, and we learn that Dwight, inexplicably, wants to return to the Navy. Caroline is resentful; Dwight is on edge; Demelza is concerned.

Back at Trenwith, George angrily interrogates Morwenna about Ross’s visits and demands that she give Osborne an answer, as the man is “distraught.”

Well, not so much. At the local brothel, Osborne is sucking with gusto on the toes of a bored prostitute, tucking into them like a platter of barbecued ribs. Evidently, he is a regular customer. Leaving the seedy establishment, he bumps into amused passersby Ross and Demelza, who are not fooled by his claims that he is there to “bring fallen women to God.”

At Trenwith, George is incensed that toads have again been multiplying in his pond, and a miserable Tom Harry is charged with excising the “loathsome objects.” Later, Drake appears and tries to convince Morwenna that she was wrong to reject him. She tries to stick to her guns but can’t; they make up. The next morning, we hear more toads loudly “riveting”; so does George from his bedroom window. After Tom Harry sputters that these are different toads than the ones he removed the last time, George, as always, finds a way to blame Ross and orders the pond patrolled at all times. Agatha dispatches Geoffrey Charles to Nampara with a written warning for Drake. Prudie receives it, but doesn’t realize it’s urgent. 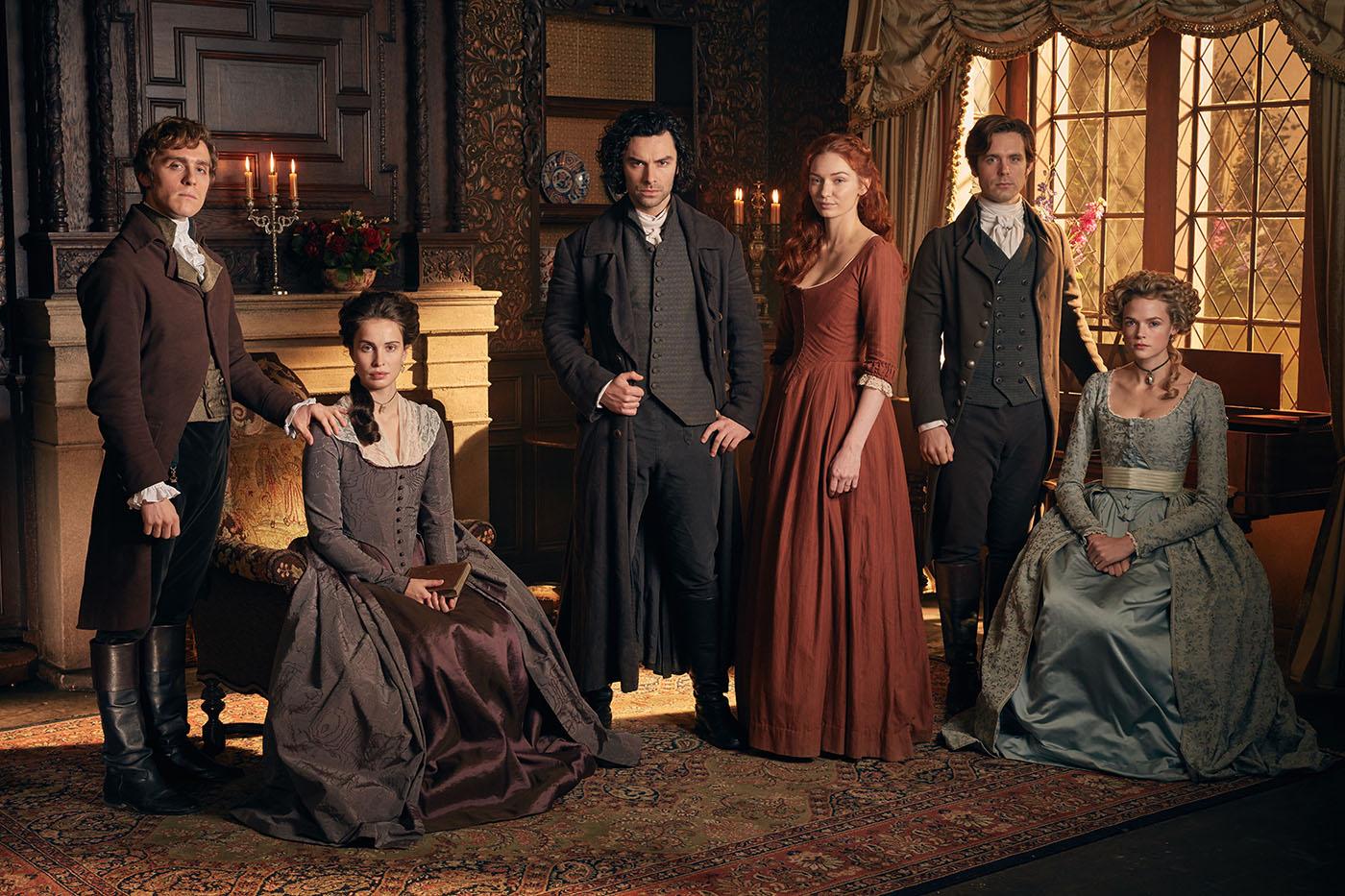 The lights are low at Killewarren that evening, and Caroline, at her most alluring, swans into the bedchamber and attempts to get amorous with Dwight. He gently rebuffs her, retreating downstairs to his medical journals. Caroline is unhappily baffled. At Nampara, Demelza and Ross ponder their friends’ dilemma. “If a wife can’t help her husband, who can?” Demelza asks. Ross may have an idea…

The next day, Caroline inadvertently startles Dwight during another flashback. To her horror, he goes into a full-blown meltdown just as Ross arrives, accompanied by Armitage. Dwight is pleased to see his prison compatriot, and they go off together to talk. Distressed, Caroline cannot comprehend why Dwight is shutting her out in favor of this man, and Ross advises patience.

Demelza returns home to find Agatha’s undelivered note: George has set a trap for Drake. Alarmed, she rides to Trenwith. We see Tom Harry and two men arming themselves in the foyer, and an unsuspecting Drake releasing more toads into the pond. Emerging from the woods, Demelza spies Drake and the sentries and, ducking behind a tree, hurls a rock into the pond as a diversion. As Tom Harry and the others move toward the sound, Demelza takes off running through the woods with Drake on her heels. Further behind is Tom Harry, who fires his pistol at Drake but misses. He pulls a heavy club from his coat and heaves it at the fleeing Drake – it slams hard into his back, toppling him. Tom Harry reaches the prone Drake, but suddenly the club changes hands and Tom Harry is out cold on the ground with Ross standing over him. Together, he and Demelza help Drake to his feet and hurry him away.

Later, as Demelza is applying a balm to Drake’s bruises, Ross scolds him for needlessly baiting George. Drake reveals his toad escapade, and Ross recalls that when they were at school, he used to fill George’s breeches with them, which explains a lot.

The next morning at breakfast, George is railing at Tom Harry: not only did the intruders escape, but they are still unknown. Geoffrey Charles is enjoying this, but not for long: George has enrolled him at Harrow for the next term. Nobody at the table is happy, least of all Elizabeth. Geoffrey Charles shares the news with Drake, who wonders what Morwenna will do. She’ll be busy, Geoffrey Charles informs him, once she marries Osborne as George has arranged. This is a nasty surprise for Drake; will Geoffrey Charles give her a message? As he departs with it, the boy gifts Drake with a family heirloom: his Bible.

Morwenna meets Drake at their usual spot, explaining that she has to go through with the marriage – they can never be together. Drake says he will work to provide for her and begs her to marry him. Caving, she promises an answer soon, and they kiss. But Tom Harry has followed her and witnessed it all. He makes the scene sound as salacious as possible to George and Elizabeth, who tell Morwenna that she has “tainted” the family and that the advantageous marriage is off – she is being sent home in disgrace. Morwenna accepts this with due humility, but Elizabeth rightly observes that she does not appear “at all dismayed.”

At Killewarren, Dwight and Armitage are having a candid chat. As Caroline eavesdrops, Dwight complains that he has returned to a life that Caroline fails to perceive is “utterly vacuous.” Armitage commiserates, and after Caroline sadly retreats, points out that few could imagine the horrors they’ve been through.

That night at a tense dinner, as Agatha blathers about the preparations for her upcoming birthday party, Elizabeth asks why Geoffrey Charles’s precious Bible isn’t in its usual place. Geoffrey Charles has no explanation, and George smells a rat.

The next day as Demelza, Drake, and Sam are working outside Drake’s house, Tom Harry and a constable arrive and, over Demelza’s protests, conduct an illegal search of the interior. They find Geoffrey Charles’s Bible. Sam and Demelza insist it was a gift, but Drake is hauled off to jail for theft. Later, Ross explains to Demelza that if an item of great worth is judged to be stolen, the thief will hang. Demelza vows to plead Drake’s innocence before the magistrate himself. Good plan, Ross tells her, but the magistrate is George. And it could have been him instead, Demelza bitterly reminds him. 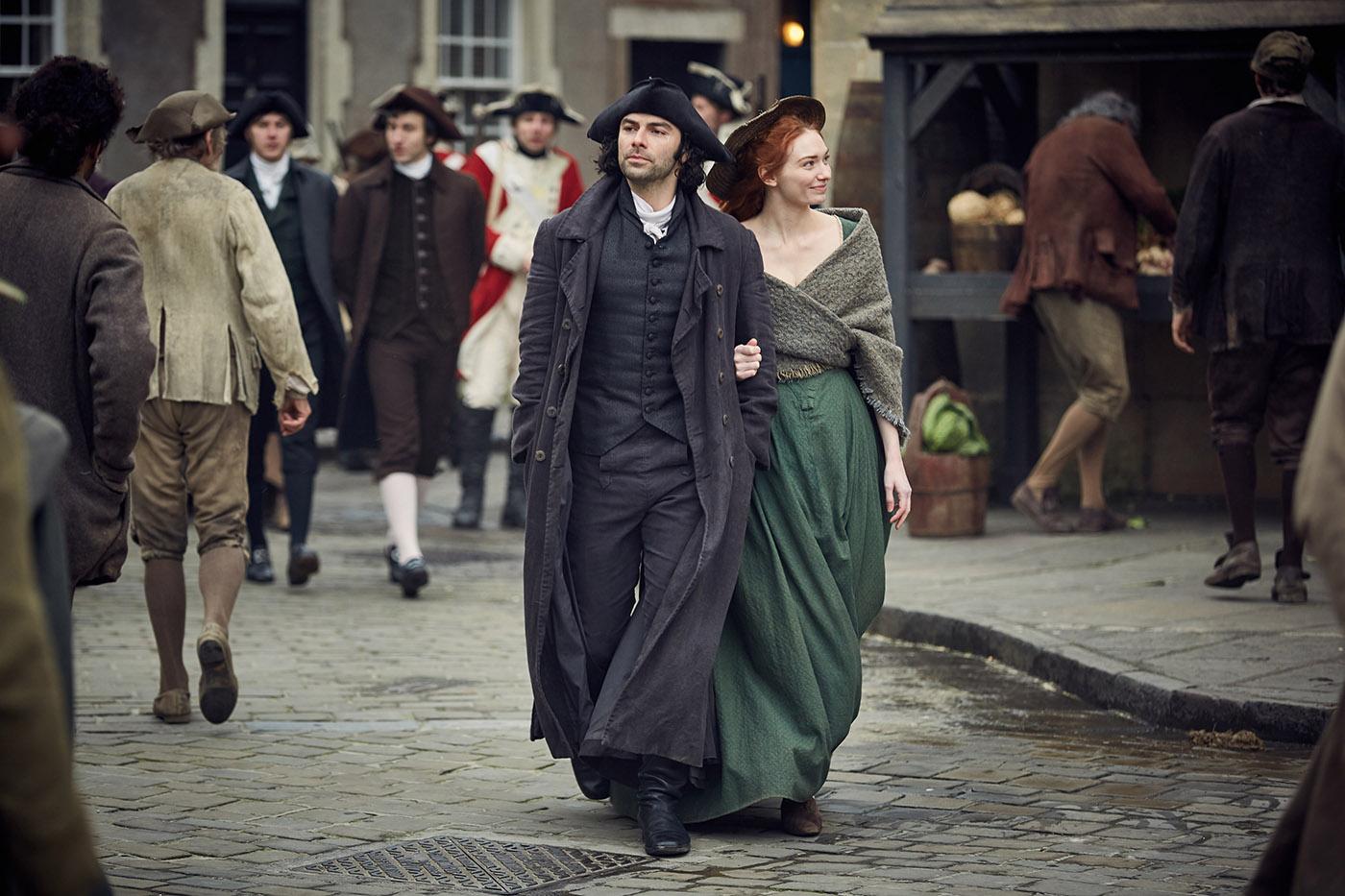 Demelza and Ross must save Drake from George's trap, somehow. Photo: Robert Viglasky/Mammoth Screen for BBC and MASTERPIECE

Ross has no choice but to plead Drake’s case to George: their wives won’t want Drake to hang and Morwenna will be ruined. He and Elizabeth care nothing about the Poldarks, George tells him, and Morwenna’s marriage has already been called off in disgrace. Ross has one remaining bargaining chip: if Drake hangs, he tells him, the villagers, already aggrieved at George’s other actions against them, will rise up as they did before. And this time, Ross will be powerless to stop them. “Idle threats,” retorts George. As he takes his leave, Ross asks ominously, “Are you sure?” Clearly, George isn’t.

At Killewarren, Ross asks Dwight to testify on Drake’s behalf. Dwight agrees; it’s the least he can do. Ross asks him to enlighten Caroline about his condition. Dwight is dismissive: “She’ll never understand.” “Try her,” Ross insists.

George is vacillating about Drake, worried that Ross is right about another villager revolt. Suddenly Osborne bursts in, bluffing that there are “several other parties clamoring to become Mrs. Whitworth,” so he fears he must call things off with Morwenna. Elizabeth, relieved, starts to agree, but George has a brainstorm. Asking Osborne to wait outside, he summons a puzzled Morwenna. What would she stake to see Drake acquitted?

As Ross, Demelza, Dwight, and Sam prepare to go to Truro to visit Drake in jail, the man himself appears – inexplicably, he has been freed. As the group celebrates, Ross informs Drake about Morwenna’s canceled engagement; promising he will set him up in a business so Drake can afford to marry her.

At Killewarren, Dwight sits down with Caroline; resigned, she assumes he is leaving her. Dwight denies it, finally revealing the reasons behind his behavior, his difficulties in adjusting to a new normal, and why it was necessary to talk to someone else who has “seen atrocities and survived.” He asks if she can bear with him. Flooded with relief, Caroline assures him that she can, now that she knows she “has not lost his love.”

Drake and the others are happily discussing possible business ventures when they receive a cryptic message from Agatha, directing them to hasten to the church. Ross, Drake, and Demelza arrive to find that Morwenna and Osborne have just been declared husband and wife – this is what Morwenna “staked” to save Drake’s life. Osborne is giddy, George is smug, Elizabeth is impassive, Morwenna is haunted, and Drake is devastated.

This will not end well.

Post-Traumatic Stress Disorder (PTSD) was unknown during this time period, and according to the National Institute of Health, was not officially recognized until 1980. Prior to that, the condition was informally known as “shell-shock” (after World War I) and in many cases, combat veterans who suffered from its effects were labeled “weak,” rejected by their military peers, and feared by the general public. So poor Caroline really can’t be blamed for not knowing how to cope.