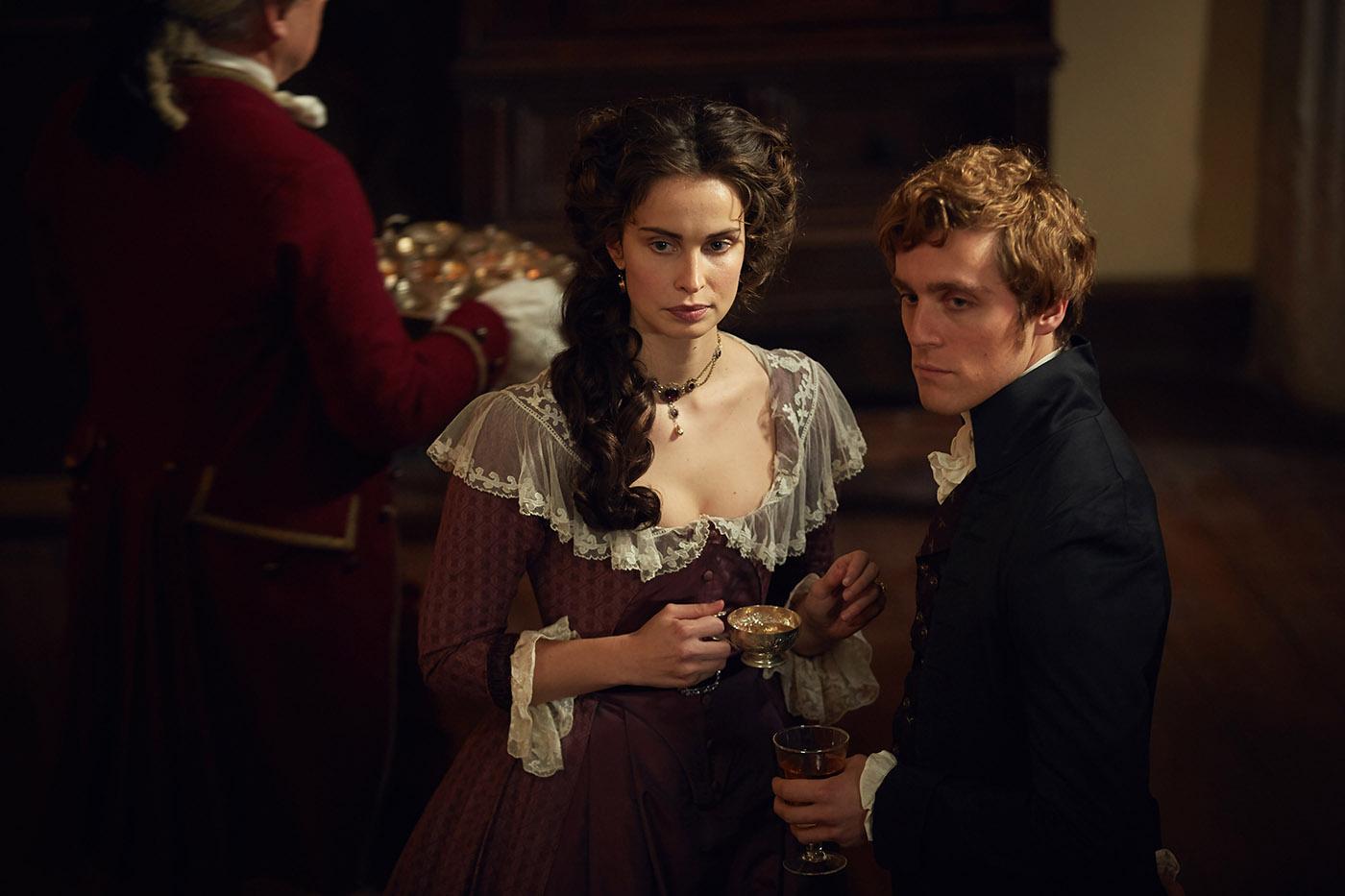 It is night, several months later. To the lively strains of a fiddle, the villagers, Ross and Demelza among them, are dancing around a bonfire and knocking back tankards of ale, celebrating the first harvest from the land Ross gifted to the town. Tholly has a job, he tells Ross – he’s the town’s new gravedigger. His cheeky daughter Emma notices Sam on the sidelines – why isn’t he dancing? The Lord considers it sinful, Sam replies. Emma thinks the Lord “do sound a proper spoilsport.”

In the village, George runs into Sir Francis Basset; has Sir Francis heard that he is the district’s new burgess? Sir Francis is preoccupied – their representative in Parliament has just died. George feigns sadness but feels anything but – one more obstacle to his political ascent has been removed.

At the vicarage, Morwenna is saying bedtime prayers with one of Osborne’s young daughters when he impatiently dismisses the little girl – his needs are more pressing. When Morwenna turns, her expression purposefully blank, we see that she is at least six months pregnant.

All of Trenwith is abuzz with preparations for Agatha’s upcoming birthday party. George, incensed that Ross and Demelza have been invited, resents the whole useless event – nobody important will be there.

Ross, still feeling indebted to Drake for the prison rescue, has a surprise for him: he has purchased a smithy on the border between Nampara and Trenwith, and he and Demelza present it to him as a gift. Drake, still downhearted, is grateful – at least he will have a vocation.

Valentine’s condition, despite Dr. Choake’s overpriced remedies, has not improved. Elizabeth sends for a now-healthy Dwight, who assures her that sunshine and healthy food will bring about a better result. George is only relieved that his son won’t be “deformed.”

The next day at Killewarren, a resplendent Caroline enters as Dwight is pondering another rejection letter from the Admiralty. He is not yet considered fit to serve, but isn’t too despondent: it’s their “public” wedding day and happily, they depart for the church. 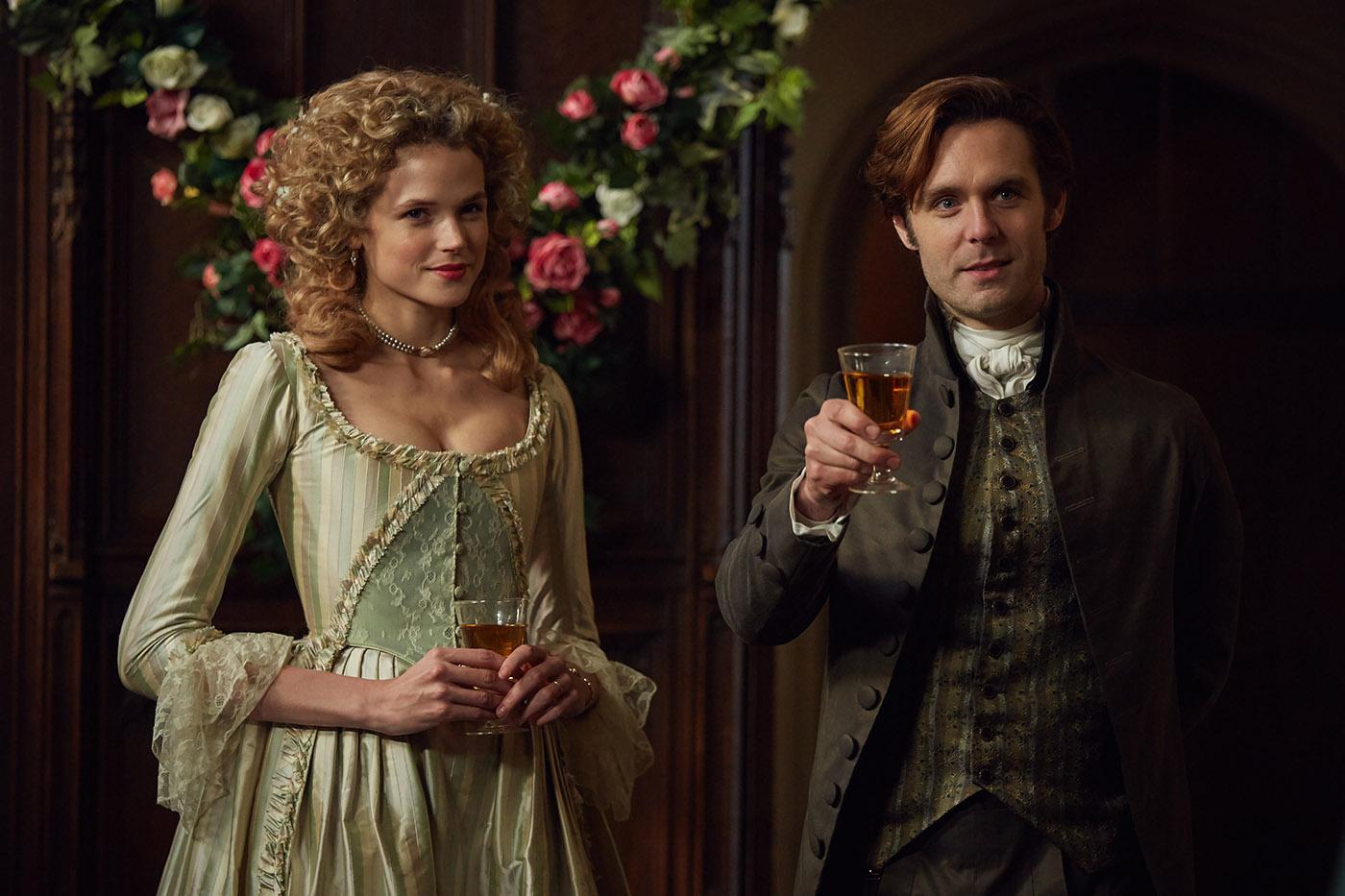 At the reception, Dwight and Caroline greet their guests, including Ross and Demelza, to whom George and Elizabeth are barely civil. Osborne and an ashen Morwenna arrive, as do Sir Francis and (separately) Lord Falmouth – clearly, there’s no love lost between them. George’s attempt to chat up Lord Falmouth fails. Dwight raises a toast to Caroline and to Ross, “the noblest, bravest man [he’s] ever known.” Lord Falmouth also toasts “the hero of Quimper” for saving his beloved nephew Armitage, who follows suit. Ross is embarrassed; Demelza, enjoying watching George squirm, is pleased to see Armitage again.

Demelza and Armitage flirt harmlessly; he isn’t dancing because his eyesight was strained during his imprisonment. Meanwhile, Sir Francis commends Ross for his land grant to the villagers – he too hopes to create more equality between the classes, he tells Ross, who applauds his mission but doubts he will succeed. Sir Francis is intrigued by Ross’s honesty.

A brooding Morwenna has managed to detach herself from Osborne’s iron grip and is momentarily alone; Demelza approaches to ask when her baby is due. Morwenna doesn’t know, nor was she in any way prepared for the “obligations of marriage.” Disturbed, Demelza asks: is Osborne unkind to her? “He’s a monster,” Morwenna flatly replies. Demelza is deeply concerned. Ross interrupts and they leave as Armitage watches them…well, her…go.

At Trenwith that evening, George is fuming – all his overtures to Lord Falmouth have come to nothing. Elizabeth suggests that he’s trying too hard, but George has decided it’s time he glommed onto Sir Francis instead. Elizabeth, with an eyeroll, throws back more laudanum.

In bed, Morwenna probably wishes for laudanum as a sweaty Osborne rolls away from her. He will engage her younger sister as a companion for her, he tells her, right before he drops off, snoring. It’s time for Morwenna’s nightly mantra: “I love Drake Carne…I love Drake Carne…”

We go to Nampara, where Demelza lightly remarks that Armitage was “quite attentive” to her. Ross didn’t notice; perhaps she imagined it. He continues derisively, “Not every man in Cornwall is besotted with you.” Ouch.

Morwenna welcomes her sister Rowella, a sharp-eyed, buxom young woman to whom two things are immediately clear: Morwenna is miserable and Osborne is vile. Rowella urges Morwenna to tell her everything.

At the local pub, Ross hears that Sir Francis and the Warleggans have formed a banking alliance. Sir Francis happens in, and extends Ross (and Demelza) a dinner invitation at his estate. A reluctant Ross and an excited Demelza duly arrive, accompanied by Dwight and Caroline. Armitage has also inveigled an invitation, and during dinner, sits surreptitiously sketching. Meanwhile, George – uninvited – arrives at the house; surely his new BFF Sir Francis won’t mind. Not so: George is left waiting indefinitely in the hall, listening to Sir Francis and his guests amusing themselves with a bowling game. While the others compete, Armitage reveals his sketch to Demelza: it’s of her, of course. She is flattered. 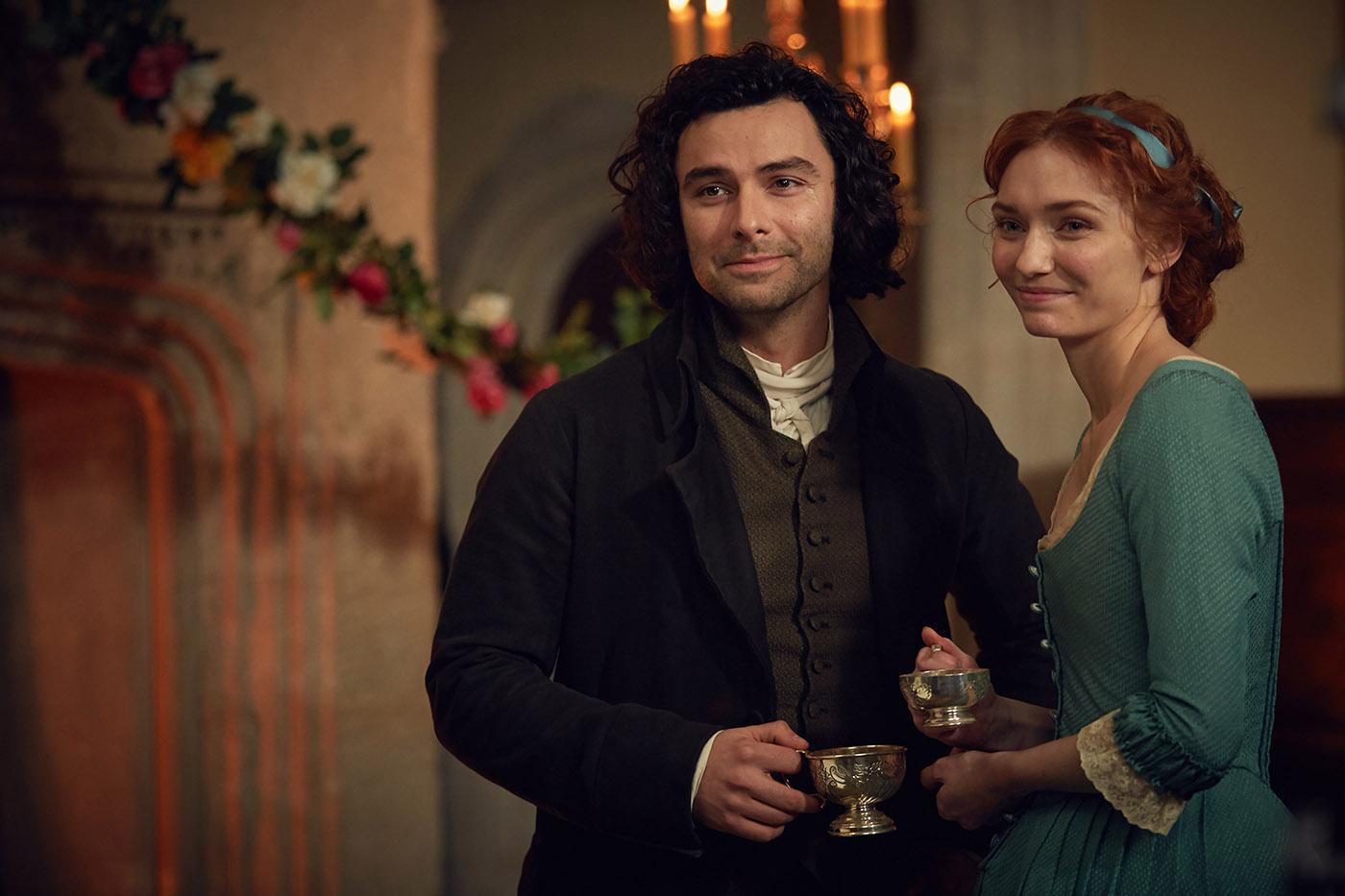 Meanwhile, Sir Francis admires Ross’s altruism and proposes that he would the ideal MP candidate to drive a wedge into Lord Falmouth’s political empire. George overhears this exchange and departs in a rage. Out of George’s hearing, Ross declines to run – he cannot be another man’s puppet. Sir Francis is disappointed (“Your stubbornness will be your undoing, Poldark!”), and Demelza believes Ross has shirked his responsibility.

Osborne noisily finishes supper at the vicarage, and Rowella slyly complains that her foot hurts, slipping off her shoe. Osborne’s eyes widen and he quickly decamps to another room. Rowella grins in triumph, but Morwenna is sadly resigned: “Till death do us part.” “Amen, sister,” agrees Rowella, clearly formulating a plan.

Upon George’s furious arrival at Trenwith, Agatha senses his humiliation and taunts him. George coldly reveals that he has been doing some research: according to the Poldark family Bible, she is not turning 100 the next week – only 98. Therefore, he has cancelled her party. Agitated, Agatha berates, cajoles, and finally grovels to get him to reconsider, but he is unmoved. Spitefully, she lashes out – Valentine, his “so-called Warleggan heir, was no eight-month baby,” she hisses, stabbing at him with a trembling finger…”someone got there before him!” In shock, George starts to confront Elizabeth, but has to pivot due to the unexpected arrival of Sir Francis – as Ross refused to be his candidate, George is being offered the opportunity instead.

While George is sealing the deal with Sir Francis, Elizabeth finds Agatha in crisis – the confrontation has been too much for her. Fading fast, Agatha begs Elizabeth’s forgiveness – she shouldn’t have told George what she did. “Told him what?” demands Elizabeth in growing alarm. “Told him WHAT?” But Agatha is gone. When a tearful Elizabeth gives George the news, all she gets is an icy glare.

The next morning, Ross receives a note from George announcing Agatha’s death. Wracked with guilt, he retreats to the beach, where Demelza angrily reads him the rest of the message: George will now be Sir Francis’s candidate for MP, and he could have prevented it.  When will he ever learn he can’t just do as he pleases? Stung, Ross fires back that if she wants a “pet,” she should look elsewhere. “Perhaps I won’t have to look too far,” she muses, as we dissolve to Armitage dreamily writing poetry.

Tholly is digging Agatha’s grave as Ross somberly walks into the cemetery. Simultaneously, Tom Harry and four other men arrive bearing Agatha’s coffin. Smirking, they unceremoniously dump it in the dirt and leave. Agatha, declares Ross, “was a great lady and a rare spirit,” and deserved better. He takes the shovel from Tholly and starts digging.

George will pay for this.