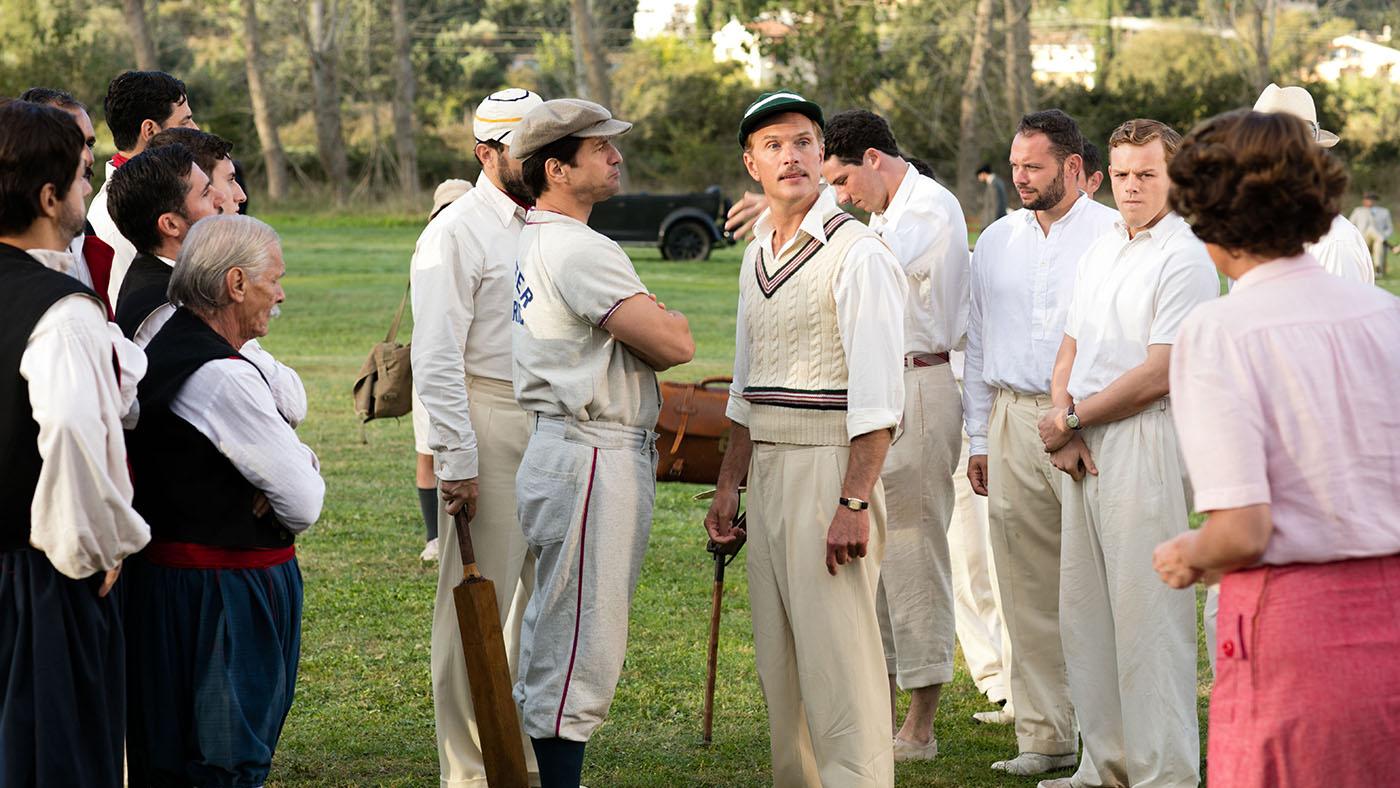 They may say it's a friendly match, but Spyros and Hugh have higher stakes in their cricket game. Photo: John Rogers/Sid Gentle Films for ITV and MASTERPIECE

It’s on. Hugh and Spyros obviously dislike each other, and when they once again butt heads at the Durrell villa the conversation escalates until a challenge is declared. The Greeks will play the British in a cricket match – as a friendly show of comity between the two cultures, Louisa insists. But for Hugh and Spyros the game is more of a pissing than a kissing match.

Spyros has already told Louisa she has bad taste in men, to which she responds that he’s simply over-protective of her and her family. Another Durrell certainly has questionable taste in romantic partners, and could use some protecting: Larry wants to end things with Vasilia, but is too easily overpowered and overwhelmed by her allure to stand up to her. Bored with all his writing, she continually distracts him from his work and even forces him to his knees to try to wrest a marriage proposal from him.

And there’s another foreigner on Corfu who is lovesick. Margo is making Donald suffer in his unrequited passion for her, and he is in turn taking it out on Gerry in their lessons by being severe and strict – to be honest, qualities that a tutor of Gerry’s requires, given his penchant for distraction, as when he runs off to protect his otters from a cruising falcon. 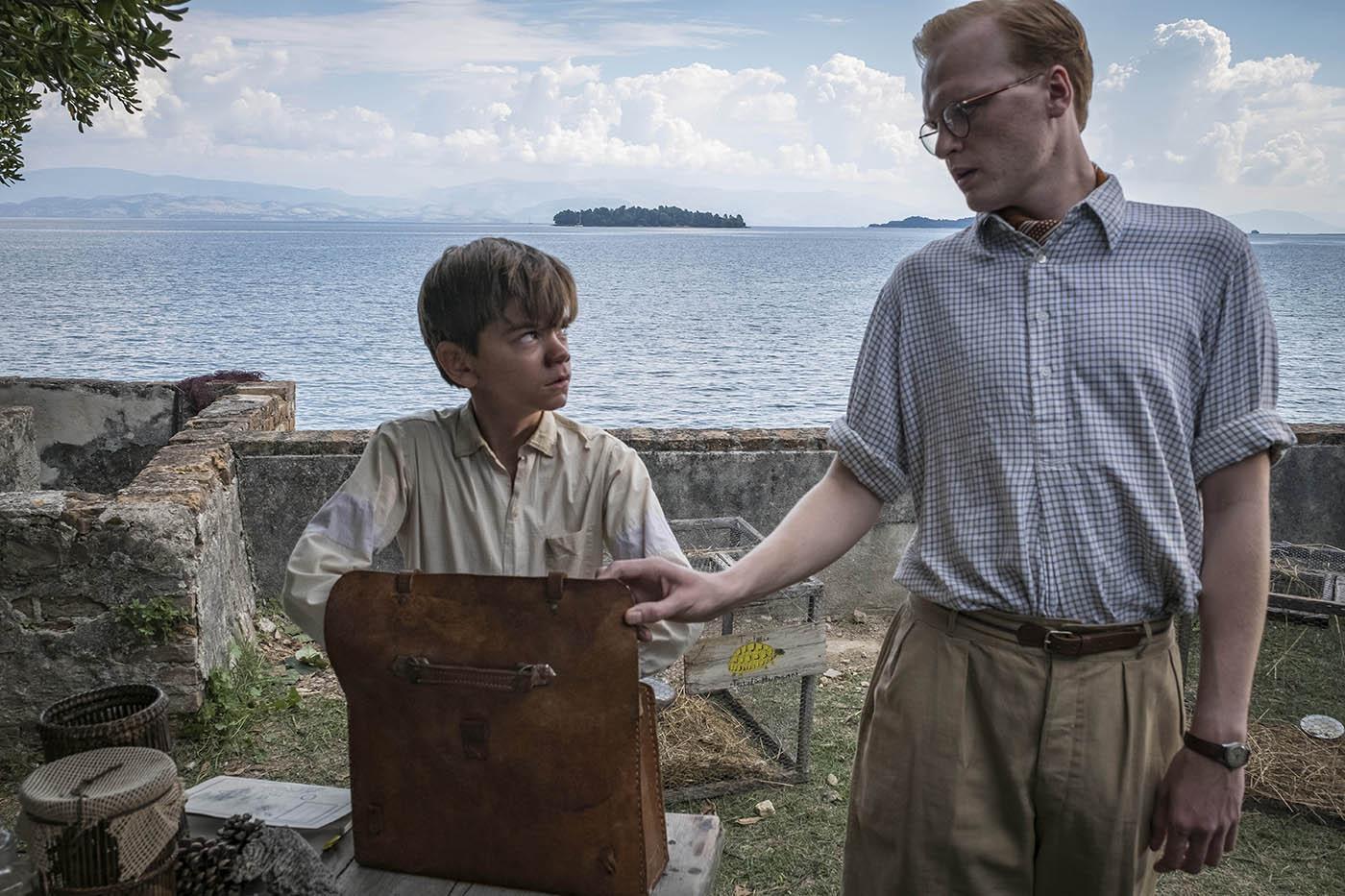 Donald is trying to be a strict tutor to Gerry, but the boy is adept at creating distractions. Photo: John Rogers/Sid Gentle Films for ITV and MASTERPIECE

After the cricket match has been declared, Louisa discovers that Spyros has no clue how the sport works. “You hit a ball with a big stick then eat cucumber sandwiches,” he says dismissively. Louisa assigns Leslie to teach him. The boy is already eagerly serving as an aggressive coach of the British team, which includes Sven and his boyfriend in addition to the Durrell boys and Donald.

As both sides prepare for the match, the stakes become clear. Hugh lets slip that he sees it as an opportunity to “win” Louisa, while Louisa’s friend tells her it looks like nothing more than an old-fashioned jousting match over a princess. Even the Countess Mavrodaki, who decides she will umpire the game when Margo approaches her with a request that she provide a trophy, predicts that it will be anything but friendly.

When Louisa surreptitiously observes the Greek team’s practice, any hope she had about the game disappears. “The Greeks will be thrashed, the British will be hated,” and it will all be her fault, she worries. Fortunately, Theo, who was away at a conference, has responded to her urgent telegram to come train the Greek team and has returned to whip them into shape – starting with how to wear a cup. 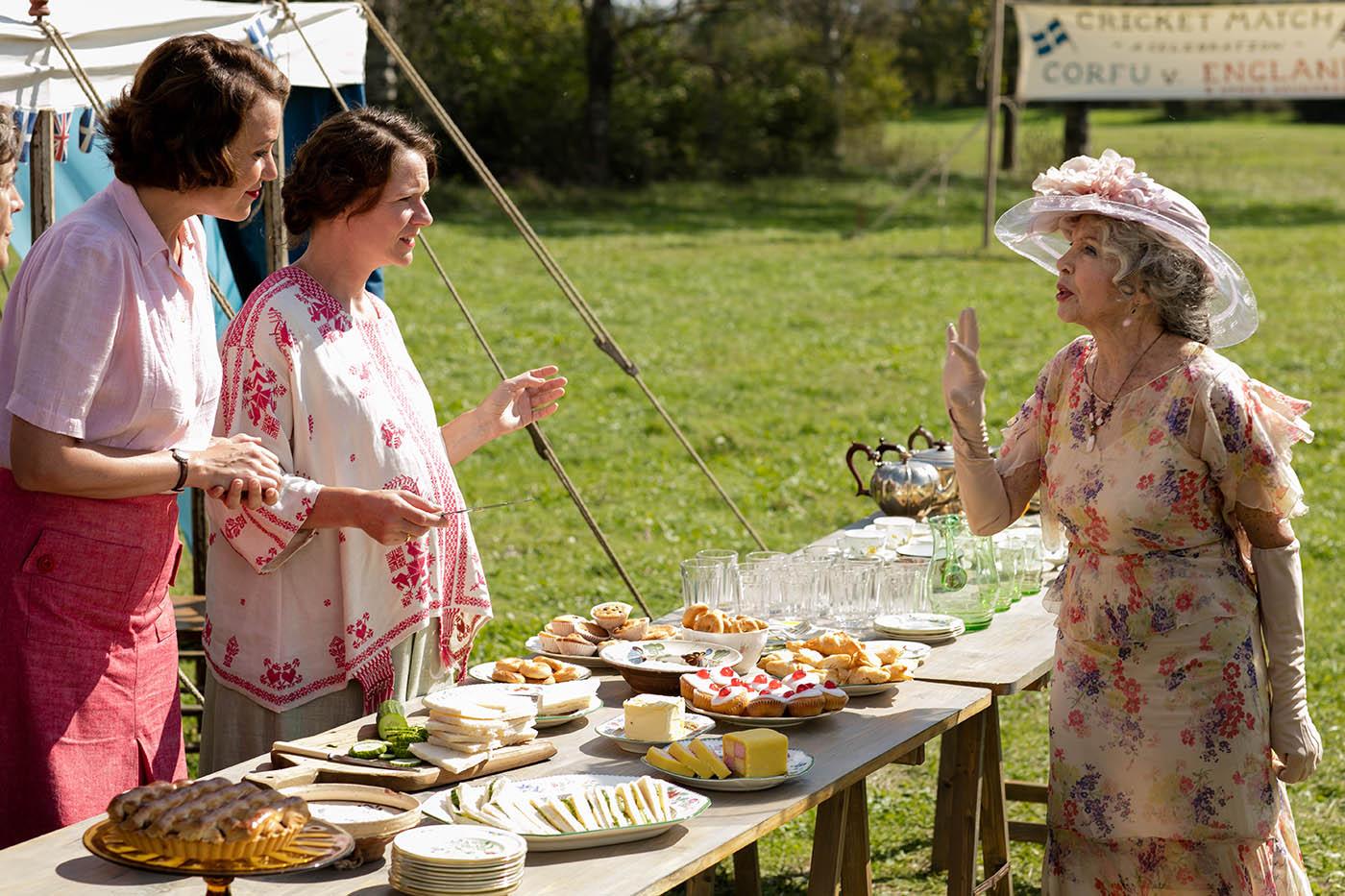 The Countess Mavrodaki has decided she will umpire what she predicts will be a less than friendly match. Photo: John Rogers/Sid Gentle Films for ITV and MASTERPIECE

Gerry devises a strategy to get out of lessons and spend more time with the falcon that has begun to frequent the villa. He’ll help Donald win over Margo. Noticing that every boy that attracts Margo is foreign, he advises Donald to be more exotic. First, he tells Donald to slink like a tiger instead of walk like a plain old English rabbit, and makes up a story that Donald’s parents are Brazilian. When that fails miserably, he suggests that Donald get a tan. Instead, the pale Englishman turns crab-red – but at least Margo sympathizes with him and tends to his burns.

Larry’s also trying to change himself, but to drive away a woman rather than attract one. His attempt to break up with Vasilia – he hid all the apartment’s sharp objects first – was scuttled by her sultry invitation to bed. So instead he’ll be dull and diffident, boring Vasilia into breaking up with him. Too bad she’s clever and sees right through his ruse.

But it seems Larry will soon be dropped by Vasilia anyway, though not because of his own effort. As the cricket match starts, Vasilia leers at Hugh and mutters that she’s had “enough boy. Time for some man.” The Brits are in fine fettle: Gerry has brought pelicans as mascots for both teams and a hawking glove in case his falcon shows up, while Larry plops on a stool with a book in the outfield. First bat: Larry, oblivious, completely misses the ball hit towards him. The countess, relaxed in a plush armchair, calls it fair. 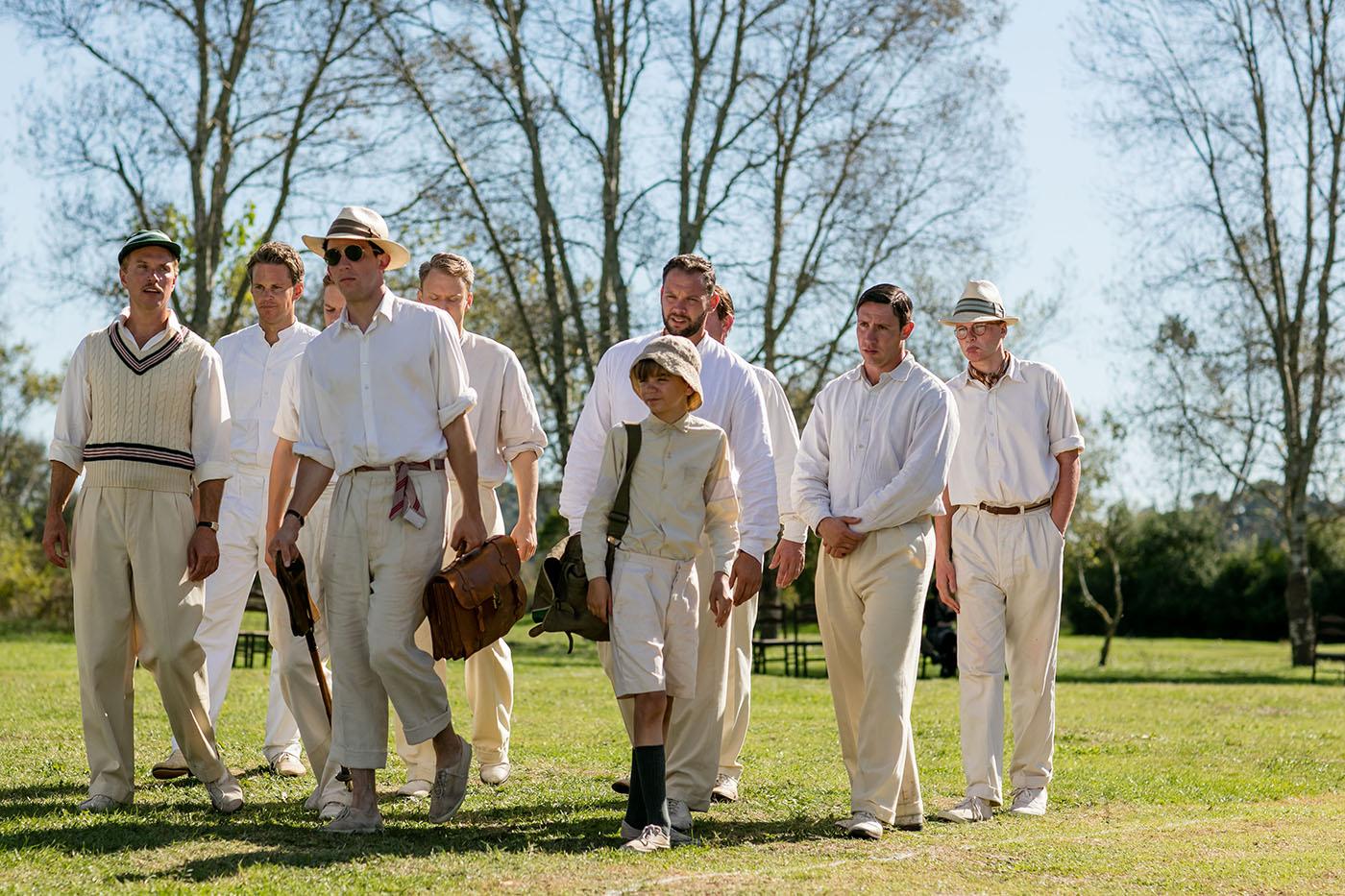 The Brits have a ramshackle team, and the match soon devolves into farcical chaos. Photo: John Rogers/Sid Gentle Films for ITV and MASTERPIECE

More distractions await: Gerry runs off to be with his falcon and the countess storms off in a huff after an eruption of rudeness. Louisa takes her place. Theo hits Hugh’s car with an impressive bat. And Hugh, infuriated that the Brits are losing, decides to bowl a “bouncer” against Spyros, despite Leslie’s protestations that the Greek is too inexperienced to handle it. The hard ball clocks Spyros in the head, briefly knocking him out. Louisa is not happy.

Break for tea! Louisa tries to get the two teams to mingle, but decorum is quickly shattered when Vasilia breaks up with Larry and demands that Hugh leave Louisa for her. When he refuses, she kisses him in front of everyone, then riles up the Greeks. Leslie accidentally spits on a Greek while choking on food, and a vicious food fight erupts. Guess the cricket game is over.

In the fallout, Louisa goes to Hugh’s house to end their relationship. He’s all charm, but she needs soul and heart. He earnestly entreats her to move to England with him – and we cut before her answer.

Back at the villa, Louisa is finally ready to eschew modesty and swim with her children. Margo is finally attracted to Donald now that his burn has become a tan, but he refuses her advance because she only likes him superficially. Now that’s how you get her to want you – Margo is definitely interested now. Larry, lonely in his studio without Vasilia, moves back home. Spyros tells Louisa that she’s special to him. And Larry wonders why Spyros was so eager to defeat Hugh in the cricket game. Perhaps the married man is in love with Louisa?