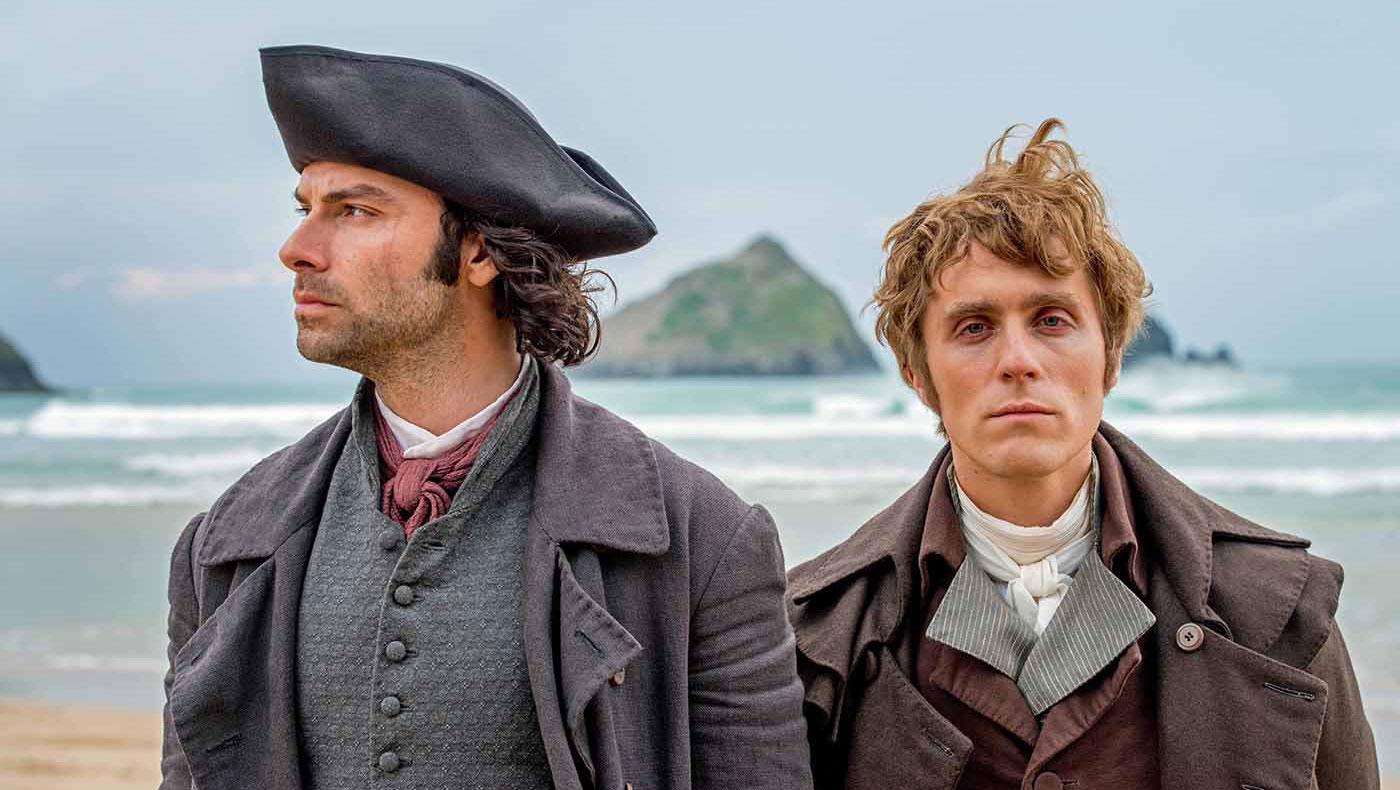 Poldark airs Sundays at 8:00 pm and is available to stream. Read our recaps of the previous episode and other seasons.

It’s the season finale! Brace yourself for a wild ride…

Prudie and Tholly lounge on the bluff, bellowing a sea shanty as they share a flask. Suddenly, they spot three tall ships approaching – flying French flags! Prudie sprints into the village, rousing the townspeople, who converge on the cove with their homemade weapons. But the ships have disappeared. Sir Francis has nonetheless pulled together a group of concerned civic leaders, including Ross and Dwight. He looks meaningfully at Ross: the men with military training must organize a militia of defenders. Ross is stoked!

Demelza, on the bluff, is reading a poem from Armitage. As she envisions him writing it, Ross intrudes on her reverie – she shouldn’t be out alone. Hearing that Ross will once again become “a leader of men,” Demelza seems glad he is assuming some responsibility.

En route from Westminster, George’s coach passes the smithy, where he spots Drake and Ross. Arriving home, he is incensed to learn that Ross purchased the smithy for Drake, and that Geoffrey Charles has been a frequent visitor. Elizabeth, who has suddenly grown a backbone, urges George to get over his obsession with all things Ross. George appears to acquiesce…but of course, he hasn’t. He directs Tom Harry to make sure Drake is put out of business.

At the vicarage, Morwenna’s condition is much improved; hesitantly, Dwight advises a few more weeks of abstinence. To his surprise, Osborne is quick to agree – even asking for laudanum to help Morwenna rest, which he suggests she do, immediately. No sooner does she depart than we hear Osborne and Rowella going at it in the next room. Morwenna, sleeping, does not. 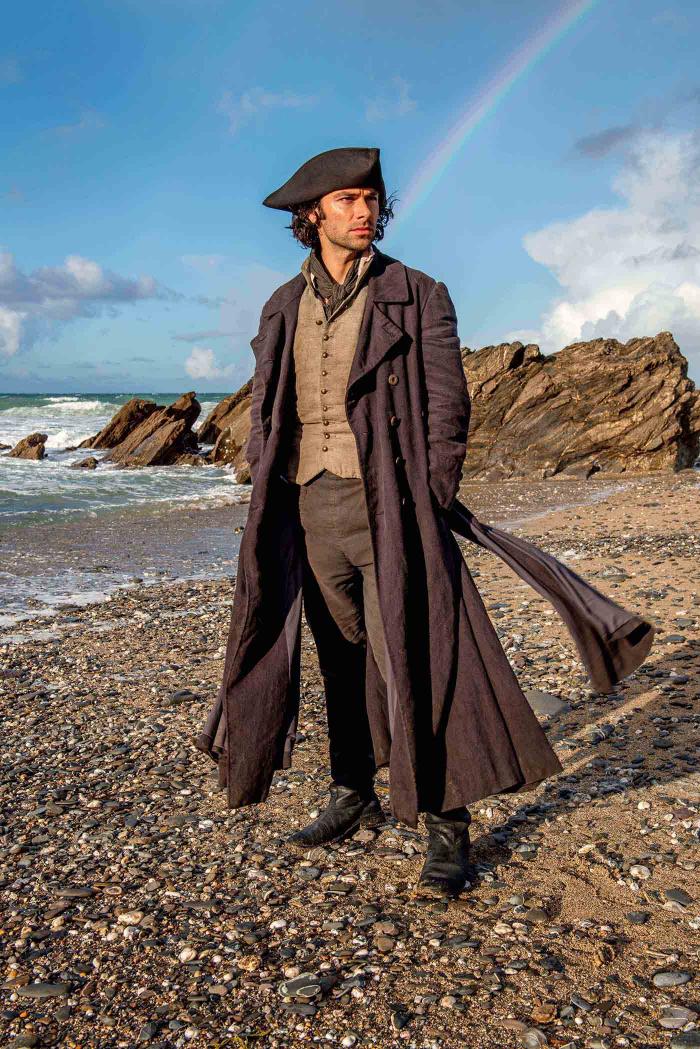 Photo: Robert Viglasky/Mammoth Screen for BBC and MASTERPIECE Cut to Ross training the newly formed local militia, including Dwight and Zacky. Tholly is thoroughly disgusted by what he sees as Ross selling out. Sir Francis, on the other hand, is impressed with Ross’s leadership and tells him so.

At Tehidy, George tries to label Ross as untrustworthy, but Sir Francis angrily calls him out: in his first term as MP, George voted against every bill they had agreed he would push through, and has been conspiring to raise grain prices again despite another bad harvest. Who’s the untrustworthy one, exactly?

That night, during Osborne’s nightly prayers, Rowella bursts in: she is with child. “What shall we do?” she wails, clinging to him. Perhaps she should run away (“YES!” thinks Osborne), but no, she says dramatically…they must face this together.

The next day, a shaken Drake is surveying the smashed and broken wreckage at his smithy: Tom Harry has obviously followed George’s instructions. But Drake will persevere.

Armitage, ostensibly on leave, is undergoing an eye examination by Dwight. It doesn’t look good, either for Armitage’s eyesight or his “heart’s desire.” He will never possess the latter, Dwight tells him, not without sympathy.

Rowella tells Osborne she may have found a solution: the librarian Solway has asked for her hand. If they marry quickly, no one else need know the baby is Osborne’s. Solway would take her, she thinks, for the right “inducement.” Cut to a determined Solway: his price is one thousand pounds. Outraged, Osborne shows him the door as Rowella noisily weeps.

At Nampara, Demelza tries to convince Ross to take a stand for Drake; Ross retorts that he has never been one to play the hero (really??) – if that’s what she wants, she should look elsewhere. Dissolve to a bleary-eyed Armitage, struggling to compose another poem.

Not content merely to smash up Drake’s smithy, Tom Harry now sets it ablaze. Drake sees him running away and attempts to put out the fire, but fails. The next day at Trenwith, at Geoffrey Charles’s behest, Drake pleads his case to Elizabeth, naming Tom Harry. George interrupts and angrily orders Drake from the house, but the damage is done: Elizabeth accuses George of ordering the harassment and demands that Tom Harry (“the brute”) be dismissed. In the woods, Drake is set upon by Tom Harry and two other men – he is beaten unconscious and left for dead.

At the vicarage, Rowella floats a letter she has written to the Bishop revealing her pregnancy…and the person responsible. Osborne sneers: no one will believe her. Someone might, Rowella archly suggests, once she describes the “very distinctive mole” on Osborne’s left buttock. She will let Osborne have the letter for 500 pounds. Morwenna, wide-eyed behind the door, hears it all.

Demelza and Sam find a bloodied and beaten Drake, still alive. As Dwight treats his wounds, Drake won’t name his attackers, but it’s common knowledge that they were George’s thugs. Cut to the tavern, where Sam and Tholly are rallying the townspeople to rise up against George. They make a battering ram and gather their weapons.

Demelza is watching over Drake when Prudie announces a visitor. Knowing it’s Armitage, Demelza vows she won’t cheat on Ross, for he gave up Elizabeth for her. “Did he?” asks Prudie, her tone heavy with meaning. “Are ye sure?”

Osborne, having been successfully blackmailed by Rowella, scuttles up the stairs to Morwenna’s room, finding her sitting by her baby’s cradle. It’s time their abstinence ended, he coos – but steely-eyed, she announces that the jig is up – she knows everything, and he will get out of her room and never return. He advances on her threateningly, but Morwenna assures him, as serious as a heart attack, that if he comes near her again, she will kill their son. Hurling platitudes at her, he nonetheless beats a hasty retreat. Flushed with victory but appalled at the lengths to which she’s been driven, Morwenna soothes her baby.

Ross, having heard from Dwight of the assault on Drake, finally sets off for Trenwith to have it out with George, but is waylaid by Demelza, who bitterly confronts him about the encounter with Elizabeth. It’s not what she thinks, Ross tries to say, but Demelza is done with secrets. Keep them, she tells him…and she will keep hers. As Demelza turns and leaves him, Ross receives an urgent message, directing him and his militia to the northern road.

At Nampara, Demelza finds Armitage waiting. His intentions are clear, but she proposes a walk on the beach. He has been discharged from the Navy, Armitage tells her – in six months he will be completely blind. Can they “grant themselves to each other, so that [he] may go into the darkness” with that memory? Demelza’s resolve crumbles, and as they sink into the tall grass, one thing leads to another… 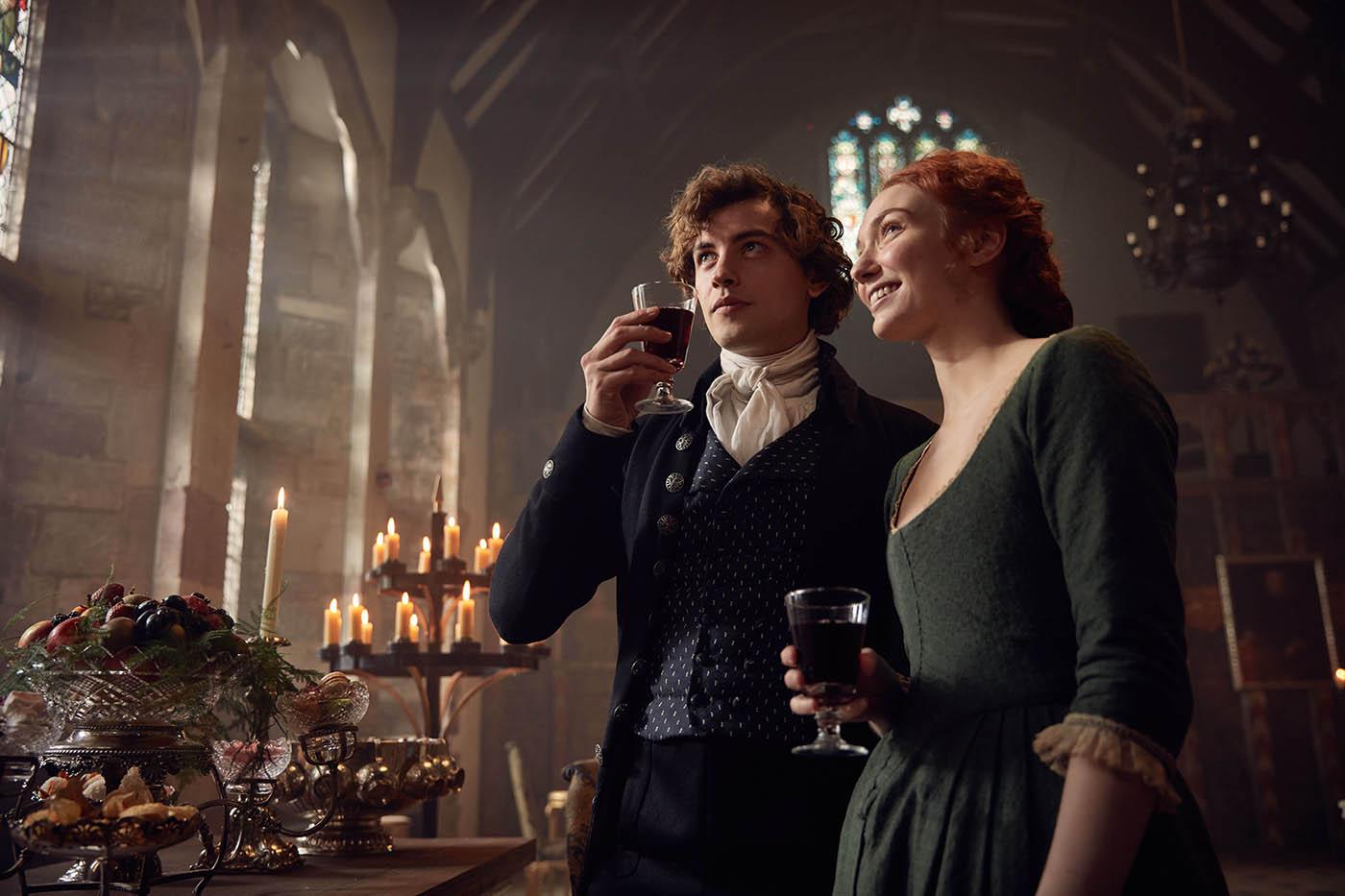 As Ross’s militia waits, armed and ready, we see that their adversaries aren’t the French, but Sam and Tholly’s angry mob, poised to help themselves to George’s grain. Ross reminds Tholly that lawlessness leads only to bloodshed and he will do what it takes to keep the peace; they must disperse before he counts to ten. As the militia aims its muskets, Tholly, calling Ross’s bluff, begins to count. As he reaches ten, Ross, scenes of violence flashing before his eyes, has a long-delayed epiphany: it’s time to take on George and his aristocratic cronies – he will stand for Parliament. Tholly approves, and the villagers, recognizing that something monumental has occurred, lay down their weapons and disperse.

At Trenwith, Elizabeth confronts George – his jealousy of Ross is poisoning their marriage. What precisely does he suspect? George won’t answer, and Elizabeth, in a rage, grabs a Bible and swears that she has “given herself” only to Francis and to him. But it’s clear that even that won’t be enough; she is leaving him, today. George backtracks, capitulates, and finally breaks down. Drained, Elizabeth forgives him.

Ross arrives home to find Demelza out and Prudie ominously quiet. Demelza had a visitor, she tells him. “Will she be back?” Ross asks. “She didn’t say,” replies Prudie, avoiding his gaze. Searching for Demelza on the bluff, Ross spies a figure on the beach below: it’s George, staring out to sea. Commenting on the irony of Ross keeping the villagers from pillaging his grain store, George (being George) can’t resist gloating – he believes he has a devoted wife, a thriving son, a fine estate, and a promising Parliamentary career. What does Ross believe? “That belief is a beautiful thing.” Ross replies enigmatically, leaving him behind.

Morwenna, blessedly alone, responds to a knock on the front door to find a bouquet of primroses.  Knowing that they were left by Drake, she says to the air, “Wherever you are, know that I love you.” A still-bruised Drake, unseen outside the gate, is content.

That night, a candle burning, Ross is in bed alone, staring at the ceiling. Demelza appears, troubled. Ross thought she might not return; she thought so, too. She lies on the bed next to him, fully clothed, and after a moment, Ross begins to ask—but Demelza cuts him off. “Ask me nothing.” He gathers her into his arms. Nothing leads to anything.

And that’s where we leave them, until next season.