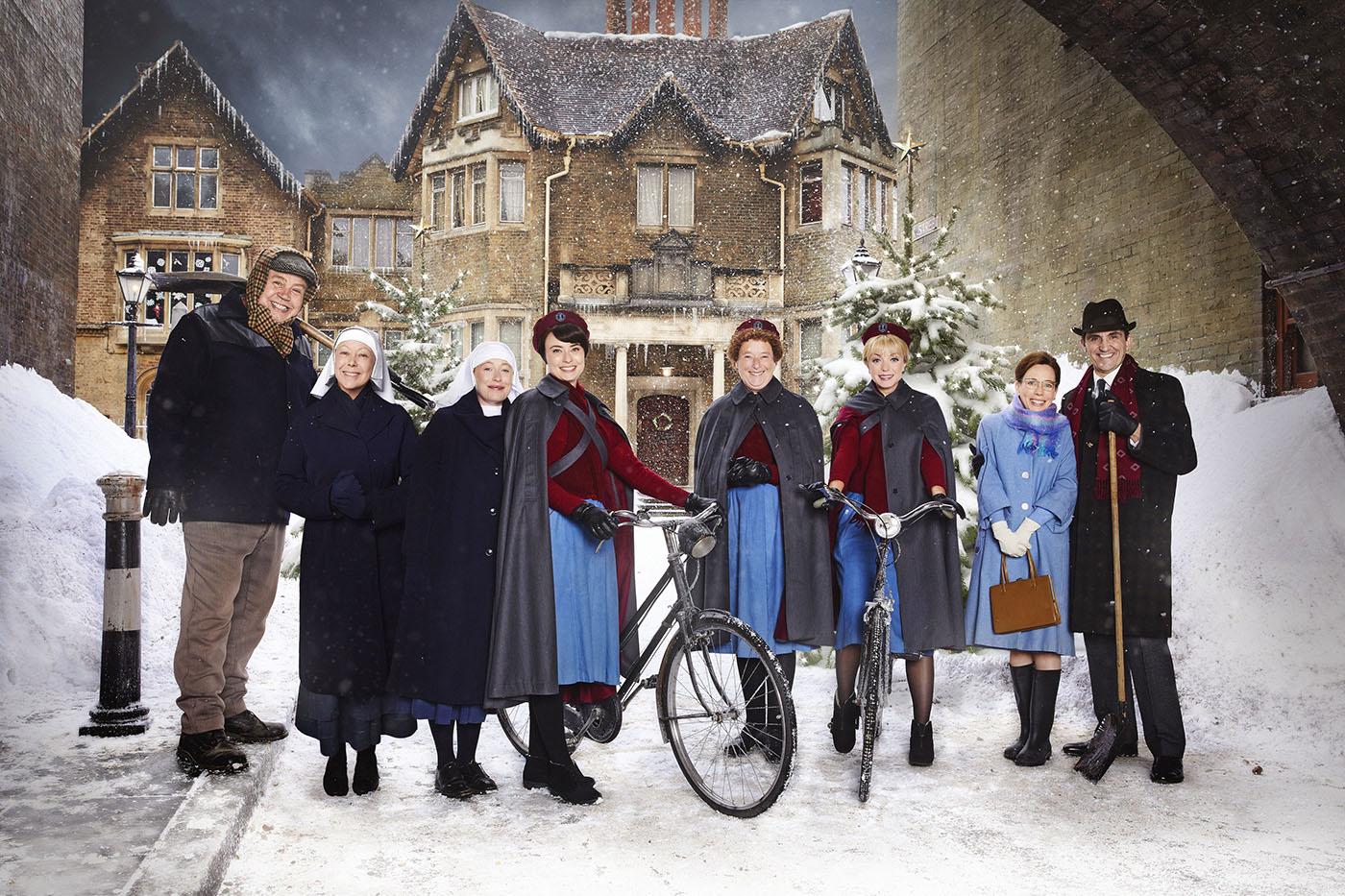 Recap the finale of the last season of Call the Midwife, and the first episode of this season.

Christmas is approaching, and it’s bringing good cheer and close friends near. Reggie is staying with Fred and Violet for the holidays, while the Turners are glorying in the addition of a new baby to their family.  Trixie is preparing for a ski trip in Switzerland with her beau Christopher, while Monica Joan’s own beloved (after God) has returned to Nonnatus House: the television. As picturesque snow falls on Boxing Day, the entire extended Nonnatus family gathers for an adorable family photo.

Alas, that snow continues to fall, and the temperature keeps dropping. It’s five below, there’s two feet of snow, and two-thirds of the country is at a standstill – including the milkmen, to everyone’s disappointment. A pipe has burst and flooded the community center, so the holiday pantomime is cancelled while the clinic has to be moved to a new location: Valerie’s aunt’s pub. While driving the equipment to the pub, Nurse Crane is stopped by a policeman who warns that she shouldn’t drive, as conditions are dangerous. She ignores him, and makes an enemy.

At the pub, a young woman named Linda arrives for a checkup. She tells Valerie that the man with her is not her husband or the father of her child; he’s a kindly roofer who has fallen in love with her. They’ve just moved to London for work and have yet to find a flat, so they’re living in a trailer. Valerie offers to visit Linda there after the girl begins to worry about the future: Selwyn, the roofer, wants to raise the child as his own, but Linda’s afraid it won’t work out.

At the surgery, a man stumbles in with a bad burn on his leg, which Dr. Turner bandages. The doctor offers to make house calls to change the dressing every day, but the man, whose name is Percy Tillerson, says his wife Mabel is housebound and that he’ll come to the surgery instead.

Due to the snow and extreme cold, which is projected to last for at least ten days, the airport is closed – and Christopher can’t make it home from Nonnatus that night. The guest room is made up for him, but when he goes to use the bathroom the next morning, Sister Winifred rushes in first. The toilet has frozen, so she tries to break the ice with a mop handle; instead, the toilet bowl shatters. On to the outdoor toilet then, which Christopher unfreezes using boiling water. He recommends a boiling kettle down the drain once an hour to keep it working, and Monica Joan takes to the task with vigor. She’s less keen on knitting a hat for Reggie, who doesn’t like the one he has, so Nurse Crane does it instead – Monica Joan’s fingers are less nimble than they once were. 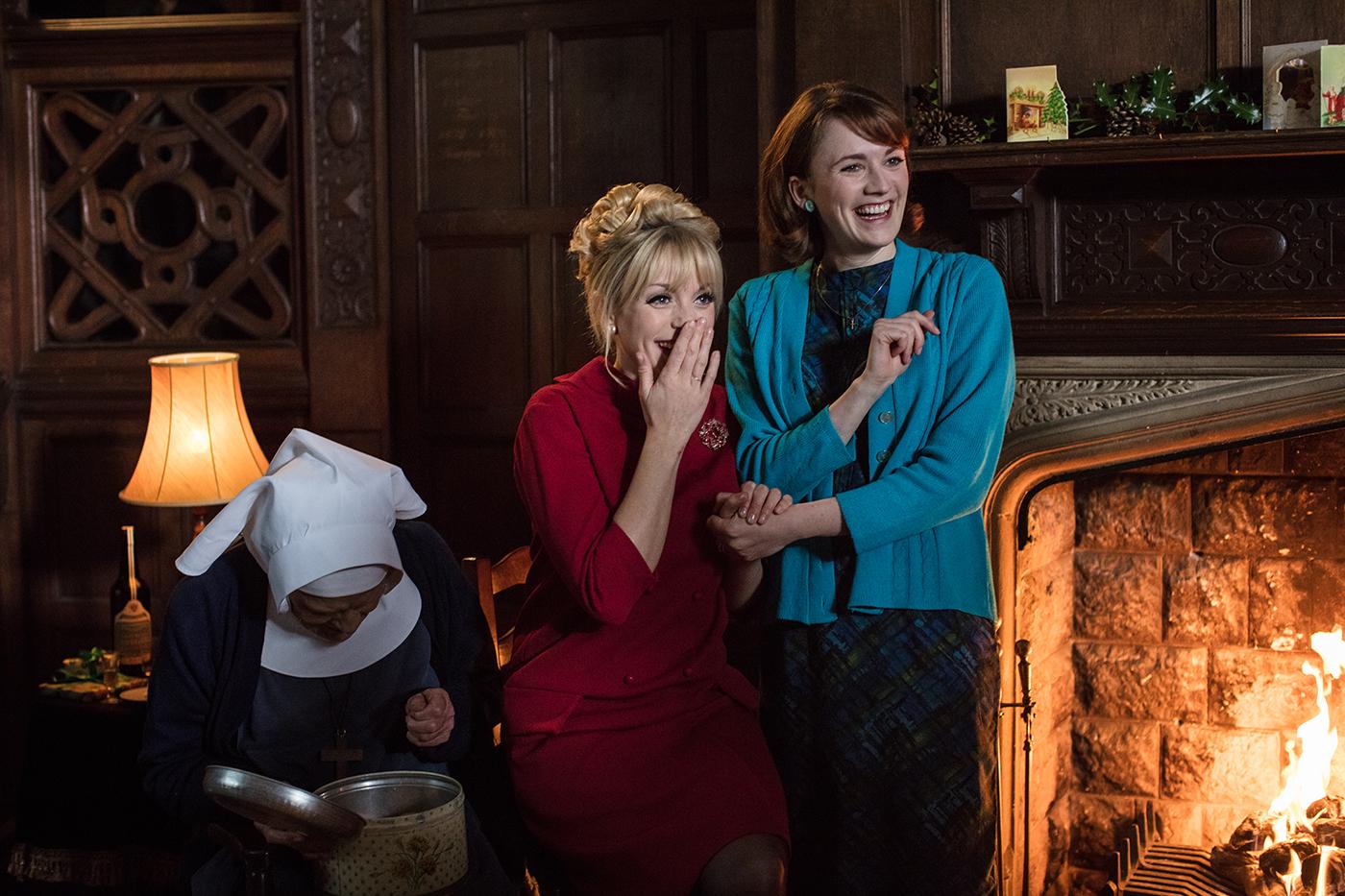 It's a warm Christmas at Nonnatus House, but the temperature soon drops and the snow piles up. Photo: Neal Street Productions 2017

As the days pass, conditions don’t improve. Eleven people have died from the cold, a sewer in Poplar has ruptured, and many houses don’t have running water. Fred discovers a dead man under a snowdrift – it’s Percy Tillerson, who must have gotten disoriented in a blizzard and froze to death. Overwhelmed at the surgery because Shelagh’s replacement has not come in, Dr. Turner sends Sister Julienne to inform Percy’s wife and calls Shelagh to complain. Next thing you know, she has pulled on her girdle and is reporting for work despite having a newborn; she'll work until this weather crisis abates.

When Julienne knocks at the Tillersons’ door, there’s no answer. She looks through the mail slot and sees Mabel slumped over on the couch. Upon enlisting a neighbor to break down the door, she revives Mabel and turns up the heat – the woman nearly died of hypothermia and had passed out. Mabel isn’t too torn up by the news of her husband’s death. In fact, she’s glad: Percy was controlling and abusive to both her and her children. Their son died of cholera during the war, and Mabel is not in contact with her daughter Anthea, who ran away – it’s hinted that Percy sexually abused her. Julienne decides to track her down.

When Valerie arrives at Linda and Selwyn’s trailer, she hears screams and finds Linda on all fours – her water has broken. The baby is four weeks early, but the delivery goes smoothly. Once the baby boy is out, however, he won’t start breathing. Valerie tries CPR, but it fails. She wraps up the stillborn infant and places him in her bag to take away from the trailer. Before she goes, Selwyn wants to look at the boy’s face, but Linda is heartbroken and refuses. He also insists that Valerie put a hot water bottle in her bag with the boy – it doesn’t seem right for the corpse to freeze.

As Valerie gets ready to leave, Trixie arrives. Valerie had been gone too long, so Trixie came to check on her. She comforts Linda, who is now beginning to believe that she and Selwyn could have raised the child together, and Valerie bikes back to Nonnatus. As she walks up to the door, her bag begins to cry. The baby is alive and was revived by the warmth of the bottle. He had a faint heartbeat and shallow breathing, but Valerie’s CPR opened his lungs. The nurse returns to the trailer with the living boy, and Linda and Selwyn are overjoyed. 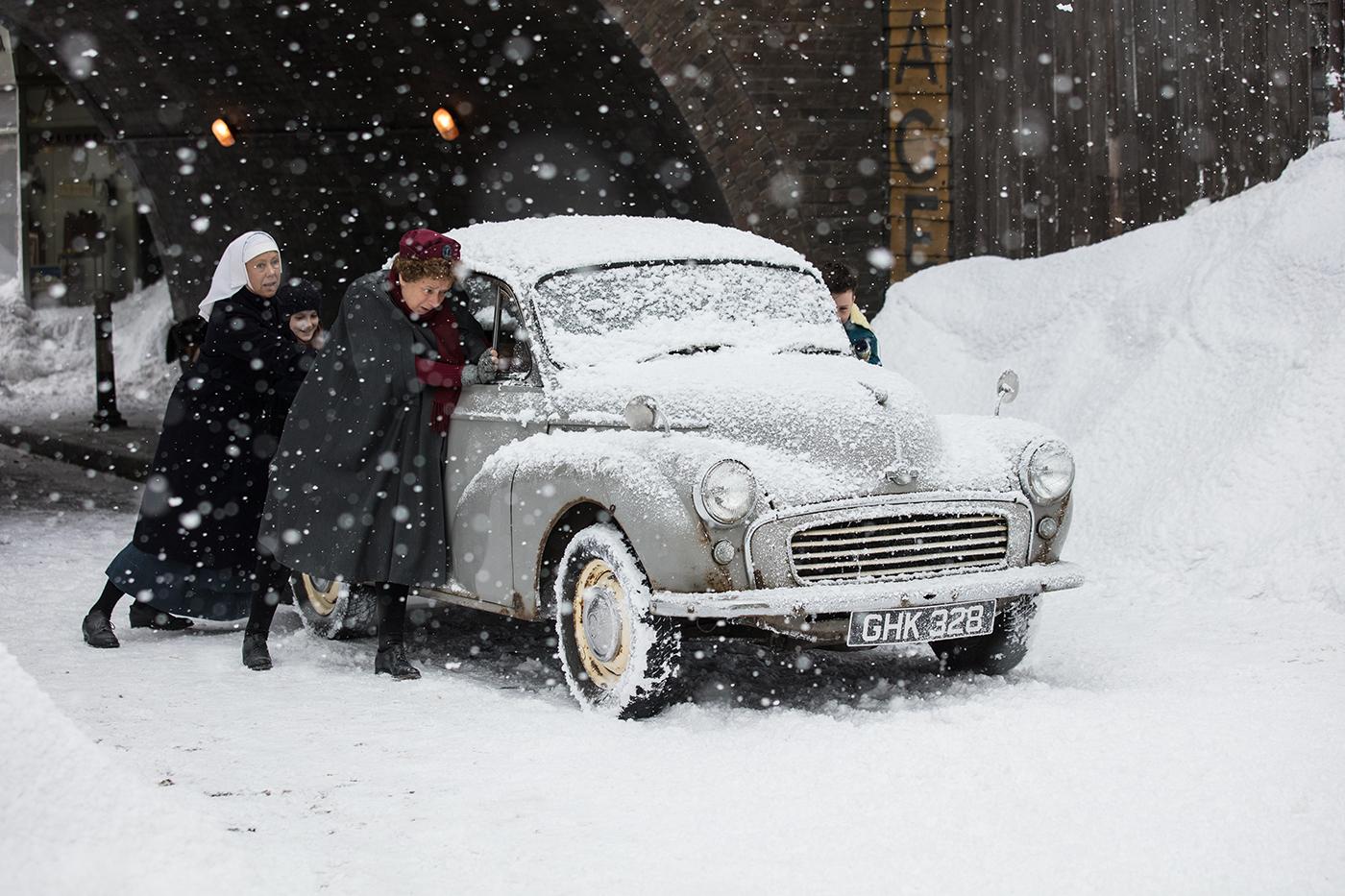 Despite the snow, the midwives continue to attend to their duties, even while the milkmen neglect theirs. Photo: Neal Street Productions 2017

Looking through old medical records at the surgery, Julienne discovers that Anthea Tillerson was brought in by her mother at age 15, bruised from a belt and three months pregnant. The next day, Mabel was brought in with broken ribs and a black eye, and Anthea had run away. But the records lead Julienne to Anthea’s new home, where she is surrounded by children. She has fostered over 30, and has a few of her own, too, including one that will arrive very soon. She wanted to give children a better experience than her own unthinkable one: Percy raped her weekly and threw her out of the house after she went to the doctor. Her mother did nothing to stand up for her, but she did leave a banknote in her pocket, which Anthea has saved.

Julienne encourages Anthea to let her mother back into her life, but she refuses. When the sister later returns to congratulate Anthea on her new baby, she again asks her to see her mother. Percy broke Mabel’s spirit, so she had no resistance left to protect her daughter. Tom has organized a dinner for the elderly and reinstated the cancelled holiday pantomime at the community center, and Mabel will be attending. Julienne suggests Anthea come.

Tom has been struggling to decide whether to take up an assignment as a temporary curate in Birmingham. When he is called to bless Linda and Selwyn’s newborn, whom Linda has named John after Selwyn’s middle name, and he observes their love, he decides to accept the position, and Barbara agrees to go with him.

Nurse Crane and Reggie, in order to occupy the Cub Scouts during the snow, have built an igloo with them. But Nurse Crane’s antagonistic policeman tells them to knock it down. “Go do something useful,” he says. So they dig through the snow drifts of Poplar, collecting milk bottles – milk couldn’t be delivered because there aren’t enough bottles, but the scouts have saved the day.

At the community center dinner, just before the pantomime begins, Anthea arrives with her family. She has brought flowers for Mabel, wrapped in the banknote her mother left for her long ago. She introduces Mabel to her newest grandchild. The pantomime starts. Tom and Barbara leave to catch a train to Birmingham. And the holidays retain some joy.