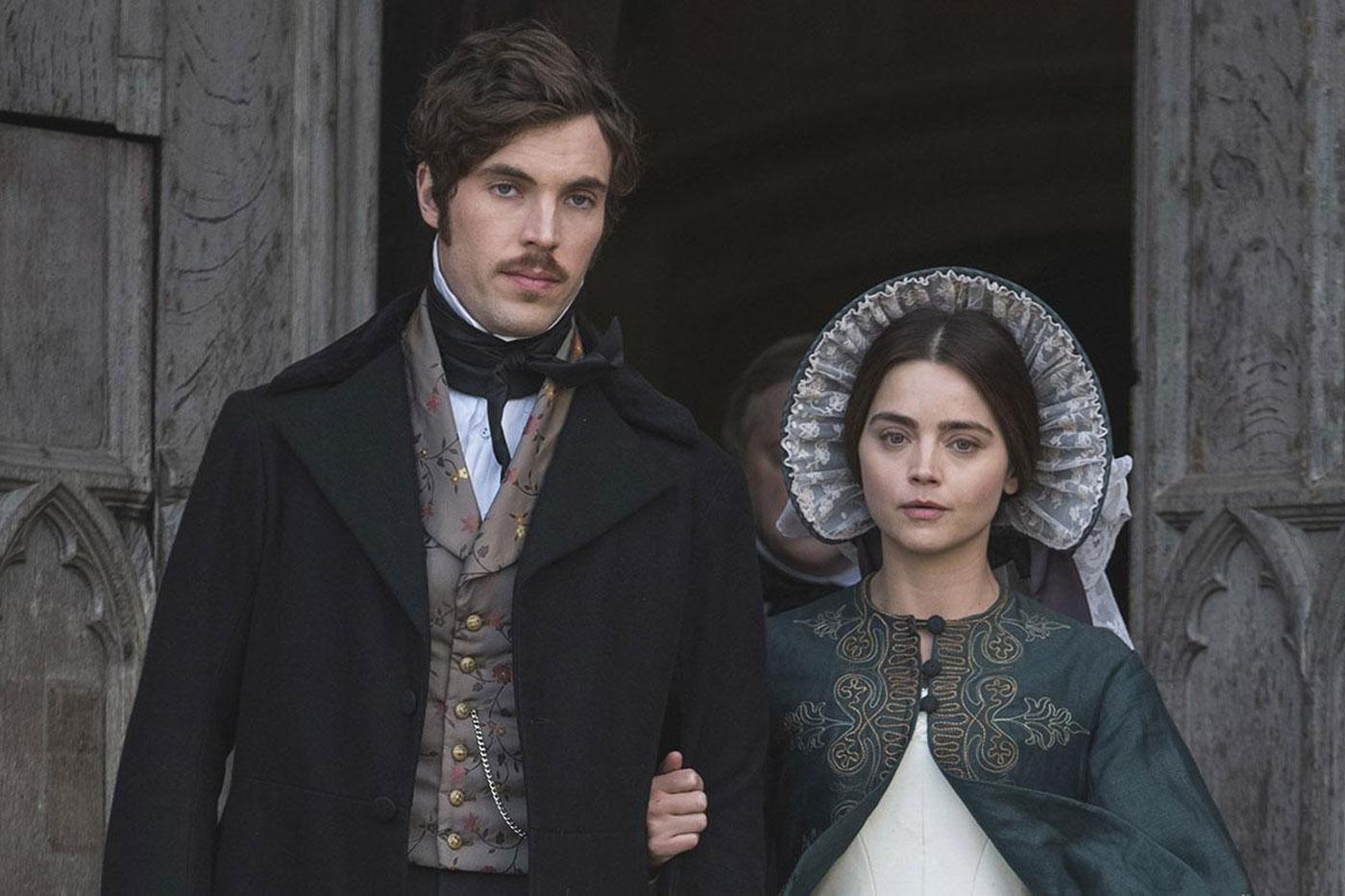 Victoria is available to stream for Passport members. Read our recap of the following episode. Find our previous Victoria content, including recaps of season 1, here.

She may be queen of the largest empire on Earth, but Victoria is being relegated to the nursery – or at least the men around her are trying to keep her there. Ever fiery, Victoria is having none of it. “I may have had a baby, but I’m quite capable of walking down the stairs,” she snaps, and thus her confinement is ended. First, though, she has to go through the patriarchal practice of being “churched:” purification by a priest after giving birth.

Yet now that she has a child, it seems that Victoria will forevermore be seen as more mother than queen. Prince Albert is reluctant to give up his role as de facto monarch – assumed while Victoria was confined – out of a paternalistic wish to keep Victoria from being overburdened, and, probably, out of a desire to retain control over his wife. He conceals news of an ignominious British Army retreat in Afghanistan and continues to discuss military reforms with the Prime Minister, Robert Peel, without Victoria.

Albert accidentally mentions the situation in Afghanistan while explaining why he has refused to approve the promotion of a royal friend. Victoria is infuriated and has to go to Lord Wellington, one of her few faithful allies, to hear the truth about the Afghan retreat: it’s a disaster. When Victoria confronts Albert over his attempt to shelter her, he responds with sexist dismissals: she must be tired; she has lost her reason. 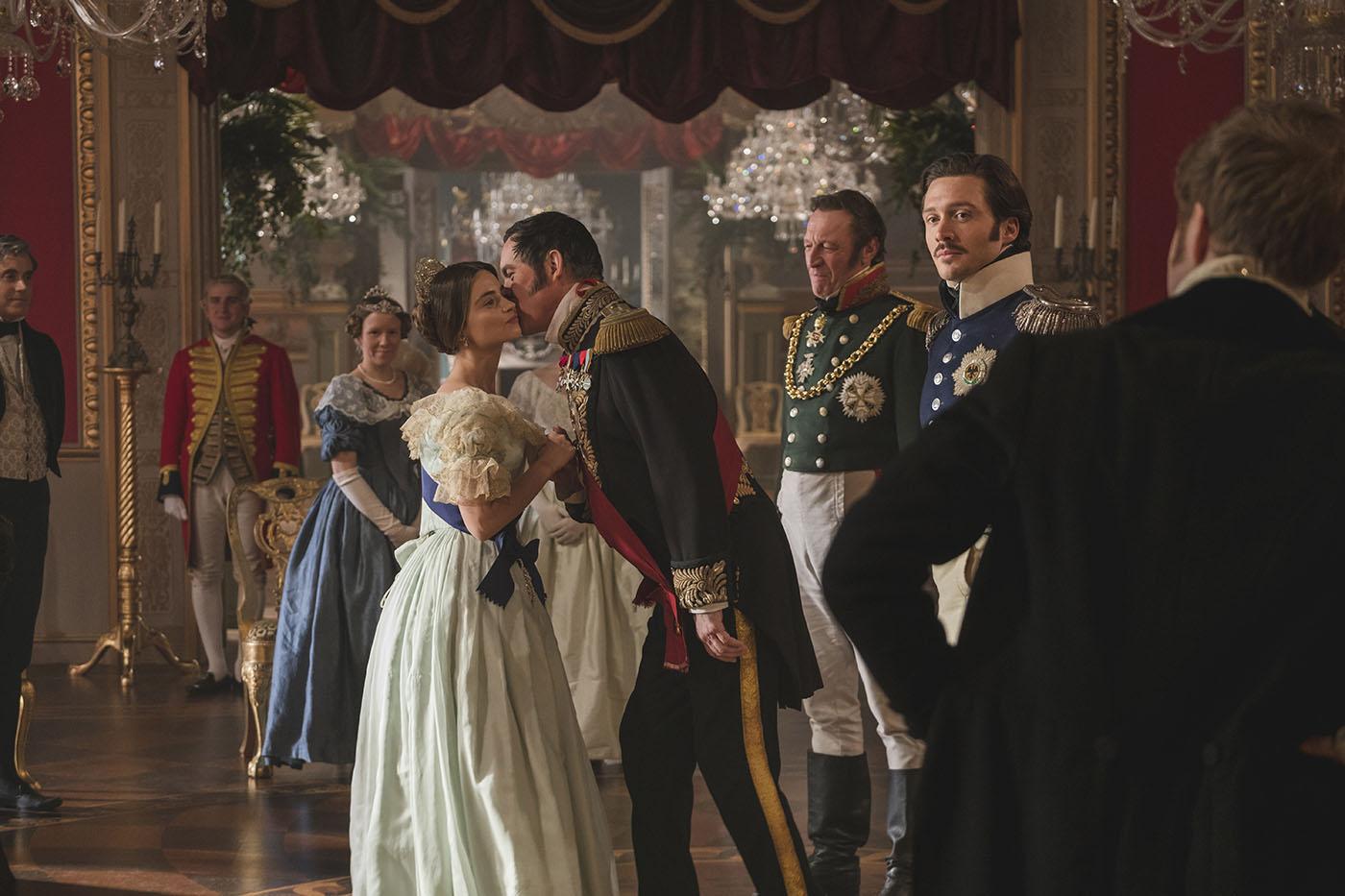 Victoria's uncle Leopold and her father-in-law both assume she is spending most of her time in the nursery – and want her to have more babies, fast. Photo: Courtesy of ITV Studios

Unfortunately for Victoria, as the christening of her child approaches, more misogyny floods into the palace in the form of Albert’s father and Victoria’s uncle Leopold. Albert’s respectful brother Ernest, who accompanies his father, at least offers some clear-headed wisdom to Albert – Victoria doesn’t like that Albert has usurped her job, he tells his brother – but Leopold and the Duke both assume Victoria is spending all her time in the nursery and encourage her to have more babies. When word reaches the palace that only one soldier out of four thousand survived the Afghan retreat, Victoria’s rejoinder to the belittling men around her is characteristically defiant. “What my country needs right now is a queen – not a broodmare,” she says.

The queen meets the surviving soldier, who informs her that the rest of his company sang “God Save the Queen” as they were slaughtered, and devises a plan to bolster national morale: she will make a speech at the commissioning of the boat HMS Trafalgar. Wellington finds the idea brilliant, but Albert, Leopold, and Peel all think it unwise. Albert, incredulous that a woman could conceive such a bold plan, even assumes that Lord Melbourne must have come up with the idea – Victoria continues to correspond with her former Prime Minister, to Albert’s chagrin.

The prince initially refuses to attend the commissioning, but after hearing the Baroness Lehzen speak of Victoria’s innate wisdom he rushes to hear the end of the queen’s speech, which is a resounding success. Victoria does, in fact, know what she is doing. 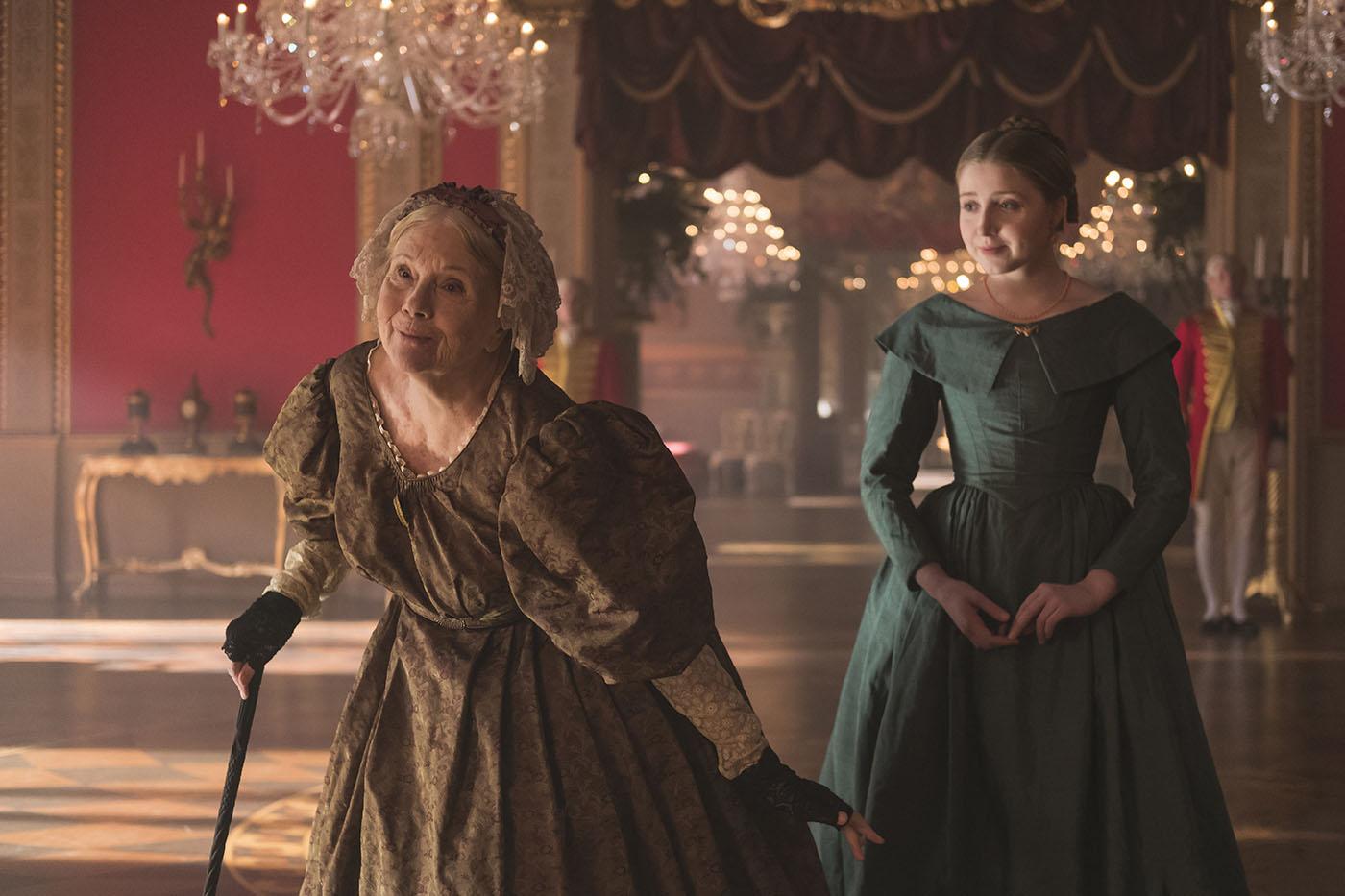 Victoria's new mistress of the robe, the Duchess of Buccleuch, is an outspoken character. Photo: Courtesy of ITV Studios

She is not, however, infallible, as is apparent in her hasty choice of a new mistress of the robe, the head of her ladies-in-waiting. From the bottom of Peel’s list of recommendations she has picked the Duchess of Buccleuch, an old-fashioned, judgmental, forthright woman (played by the formidable Dame Diana Rigg). The Duchess brings along her young niece Wilhelmina, who quickly falls under the thrall of Ernest, who is still smarting from the end of his impossible affair with the married previous mistress of the robe, the Duchess of Sutherland.

Other personnel changes have occurred downstairs. Mrs. Jenkins has gone home to Wales to take care of her deceased sister’s children, so Skerrett has been named the new chief dressmaker. Despite Penge’s hope that Skerrett will choose his niece as her assistant, she instead takes on a young Irishwoman named Cleary. The cook Francatelli has been replaced by an irritable – and apparently tasteless – Scot, but Victoria quickly forces Francatelli to return against his will. Still resentful that Skerrett refused to leave the palace with him, he refuses to speak to her. 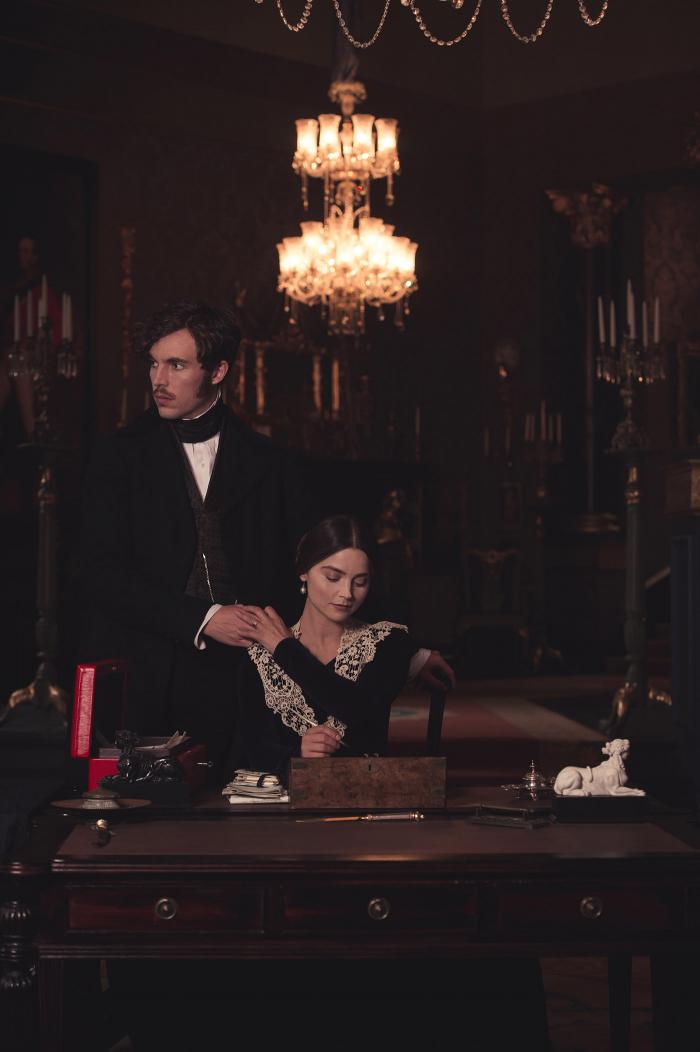 Albert, under the guise of protecting Victoria, doesn't want to give up the power he gained while she was in confinement. Photo: Courtesy of ITV Studios Albert, meanwhile, is all too eager to leave the palace. He has lately been fascinated by an “analytical engine” – the predecessor to the computer – being developed by Charles Babbage and Ada Lovelace, and has been frequenting the Mathematical Society to see and discuss it. One suspects he is also avoiding confrontation with Victoria, who continues to feel belittled by him, and with his father, who has asked him for money. Disregarding Ernest’s advice to help their father, Albert refuses, on account of his father being a philandering wastrel.

Victoria is less easily brushed aside. Sincerely interested in the mathematicians’ project, she throws a “cultural soiree” in honor of them, featuring ballet dancers and the renowned African American Shakespearean actor Ira Aldridge. But when she observes Albert’s constant joy in the presence of Babbage and Lovelace – and is humiliated by her lack of knowledge when she tries to join their conversation – she becomes jealous of Lovelace. The fact that the mathematician is the daughter of Lord Byron, an infamous philanderer who had an affair with, among others, Lord Melbourne’s wife, only makes things worse.

Victoria learns of Lovelace’s parentage from Melbourne himself, whom she invited to the soiree. That invitation drives a further wedge into Victoria and Albert’s marriage. Leopold warns Melbourne against maintaining his relationship with Victoria, and Albert chastises her for inviting Melbourne in the first place – it looks bad politically, and also probably makes him envious.

Things reach a nadir when Albert attends a dinner for the mathematicians in defiance of Victoria’s will and then twice refuses her hand-delivered entreaty to return home. What’s so urgent? Victoria is pregnant again, but since Albert is shunning her she won’t tell him. She finds comfort cuddling with her dog Dash instead. 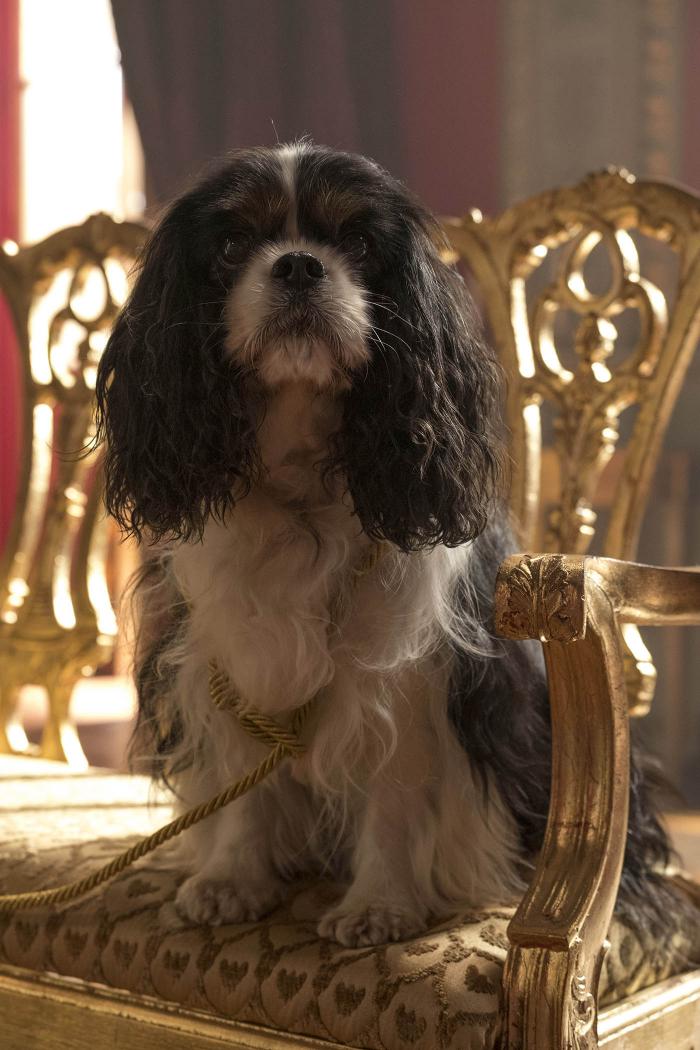 The ever-lovable Dash is always ready to comfort Victoria. Photo: Courtesy of ITV Studios The next day Victoria sets off to visit Melbourne for advice, leaving a pointed message with the Duchess of Buccleuch that she should inform Albert where his wife has gone. But Albert ignores Buccleuch; it’s none of his concern. While Victoria is away, he does, however, find out from Leopold – who overheard gossip – about Victoria’s pregnancy.

Victoria laments to Melbourne that “to be a queen, I must rule, but to be a wife, it seems I must submit.” She suspects that Albert wants her to have more children so that he can continue to rule in her stead – probably true. Oh, the patriarchy. Sage as always, Melbourne responds that she must trust in her power. Albert “wouldn’t be the first man to underestimate a woman, would he?” he says with a knowing smile. And he reminds her that “knowledge is not wisdom;” however much Albert knows about mathematics, Victoria knows more about ruling and life.

Unfortunately, Victoria will once again have to cede control since she’s pregnant – something about which she’s not too keen. “There are times I wish I had been born a man,” she says. But in the days to come, Melbourne assures Victoria in a letter that Albert is faithful and loves her, not Lovelace. The queen decides to see the mathematicians’ analytical machine for herself, and comes face to face with her rival. She is surprised to find that Lovelace, too, struggles with the burden of motherhood – she would accomplish so much more without children, however much of a blessing they are.

And thus Victoria decides to apologize to Albert. In response, does he apologize for trying to control her and being petty? Of course not. He’s just happy they’re going to have another baby. As usual, Victoria does all the emotional work of maintaining their relationship.

Downstairs, Penge is also neglecting his duties – professional, not conjugal. Some “guttersnipe” has been pilfering food, linens, and valuables, but Penge isn’t too concerned, nor does he want to involve the guards as he’ll be blamed for letting the thief in. Finally, the boy is caught when Skerrett and Cleary hear him rattling in a cabinet. What punishment awaits?