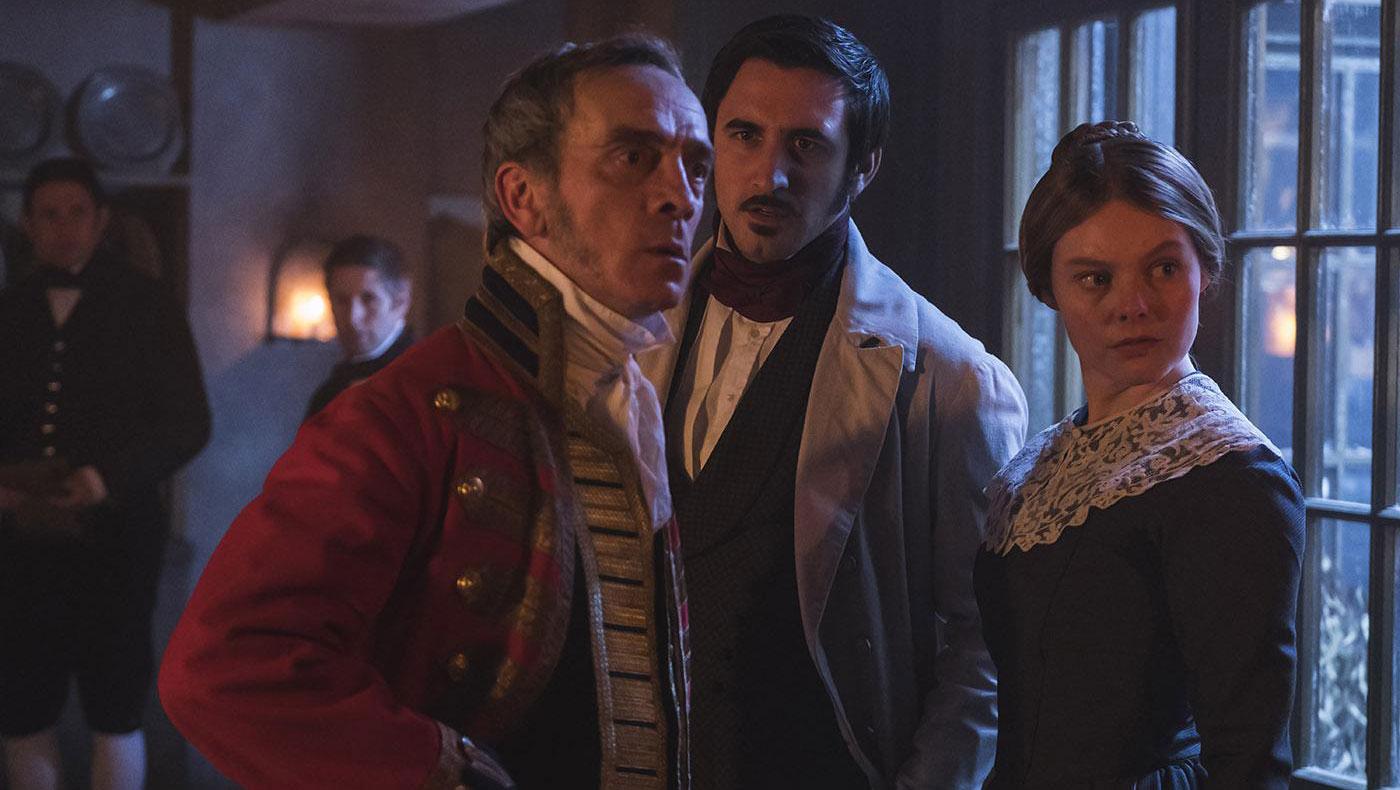 Cleary becomes the cause of conflict downstairs after Francatelli gives her a generous gift. Photo: ITV Studios

While Victoria was indulging in plump birds drowned in Armagnac, towers of cream puffs, and freshly picked citrus in France, millions of her subjects were starving, living off seaweed and nettles. But the Great Irish Potato Famine is of no concern to her government, members of which see it as a necessary culling of an over-populated area. “Nettles contain more nourishment than you might imagine,” a self-righteous minister informs her. “I believe, when gathered young, the leaves taste like spinach.”

The British disregard for the famine is mirrored in Ireland itself by Protestants. Most of those who are starving are Catholics, legally restricted in their rights so that they are almost solely reliant on potatoes; when a blight ruins that crop, the Catholics have nothing to eat and no way to pay rent. But the Protestant church and politicians blame the Catholics for their problems, pinning the famine on their supposed laziness and propensity for drink (an age-old canard about impoverished or minority communities still used today). One priest is even using the famine as a ploy to convert Catholics: if you become a Protestant, then we’ll give you food.

One Protestant clergyman does prove himself capable of human feeling and protests the church’s inaction. Dr. Robert Traill (an ancestor of Victoria’s creator and writer, Daisy Goodwin) writes a letter to a London newspaper describing the terrible conditions in his parish, and Victoria happens to read it. When she asks Peel to send aid, the prime minister responds that doing so is politically inadvisable: the British will ask why their hard-earned wealth is being used to help wastrels, and will also agitate even more for the repeal of his party’s unpopular, high tariff Corn Laws. 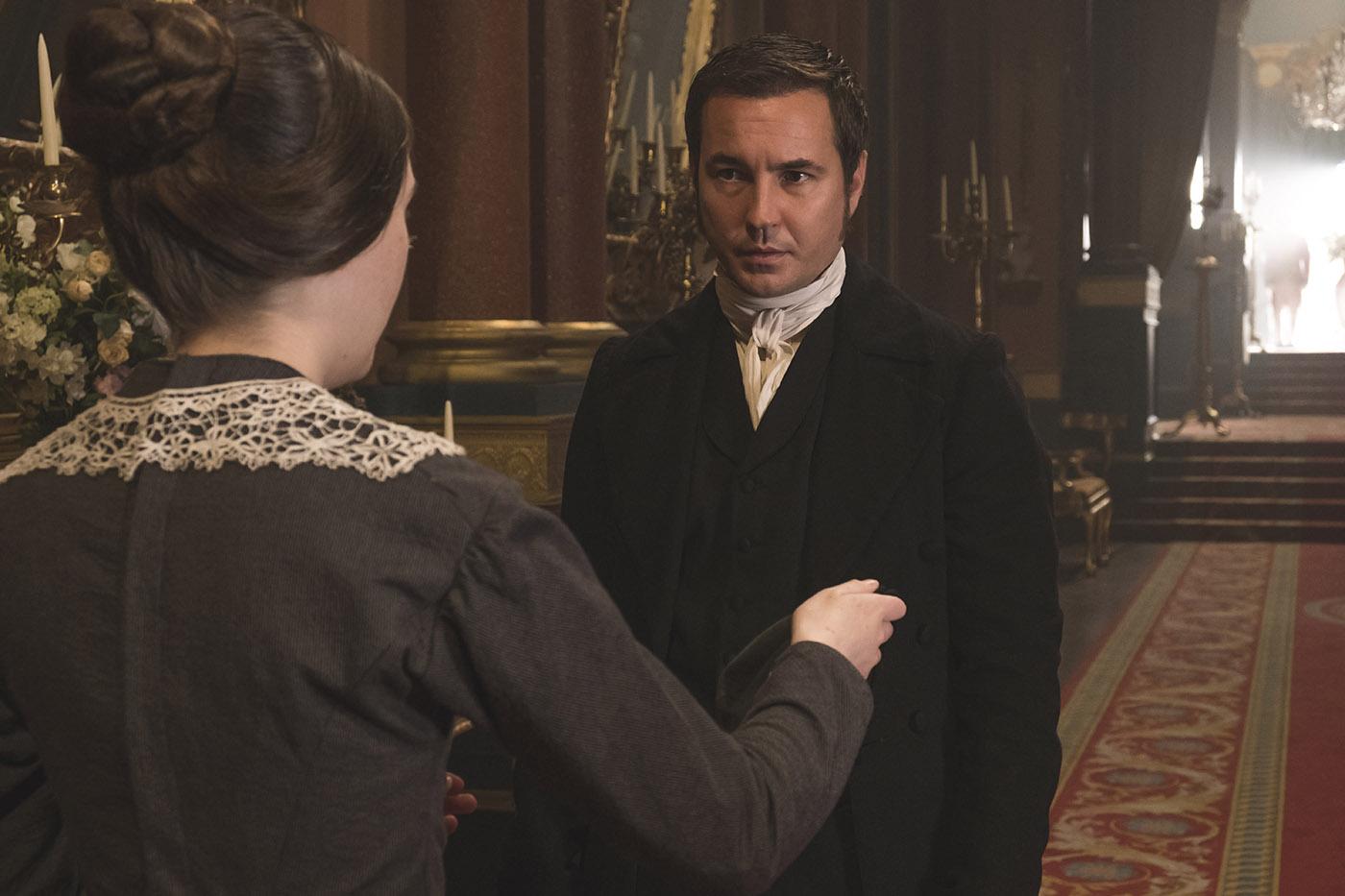 Both English and Irish Protestants blame the Irish Catholics for the potato famine, but one clergyman does attempt to help the starving. Photo: ITV Studios

Frustrated by the insensitivity, Victoria bypasses Peel and invites Traill to the palace to tell her more about the famine. When he arrives in London, he is appalled by the abundance of food. While the Irish starve, the English are selling grain abroad. Speaking with Victoria, Traill is interrupted by Albert, who offers a slightly more benign form of the “this is the Catholics’ own fault” argument. But Traill disagrees, pointing out the Catholics’ lack of legal rights. Victoria vows to do her best to help.

As he is leaving the palace, Traill is intercepted by Cleary, Skerrett’s Irish assistant. Her family lives in Traill’s parish, and she has been sending her wages to them so that they won’t be evicted. Hearing that Cleary was unable to convince Penge to pay her early so she could send more, Francatelli has generously given her his gold watch to sell, telling Cleary she owes him nothing. (Francatelli was being courted with gifts by an American publisher who wanted him to come to the U.S. and write books, but he has declined, instead handing over some of his recipes to her.) Cleary now presses this watch into Traill’s hands, asking him to give it to her family. When he accepts, he inadvertently reveals that Cleary is a Catholic – an unwelcome denomination in the palace – and Cleary is denounced by Penge and Lehzen before Francatelli, Skerrett, and Victoria all stand up for her. 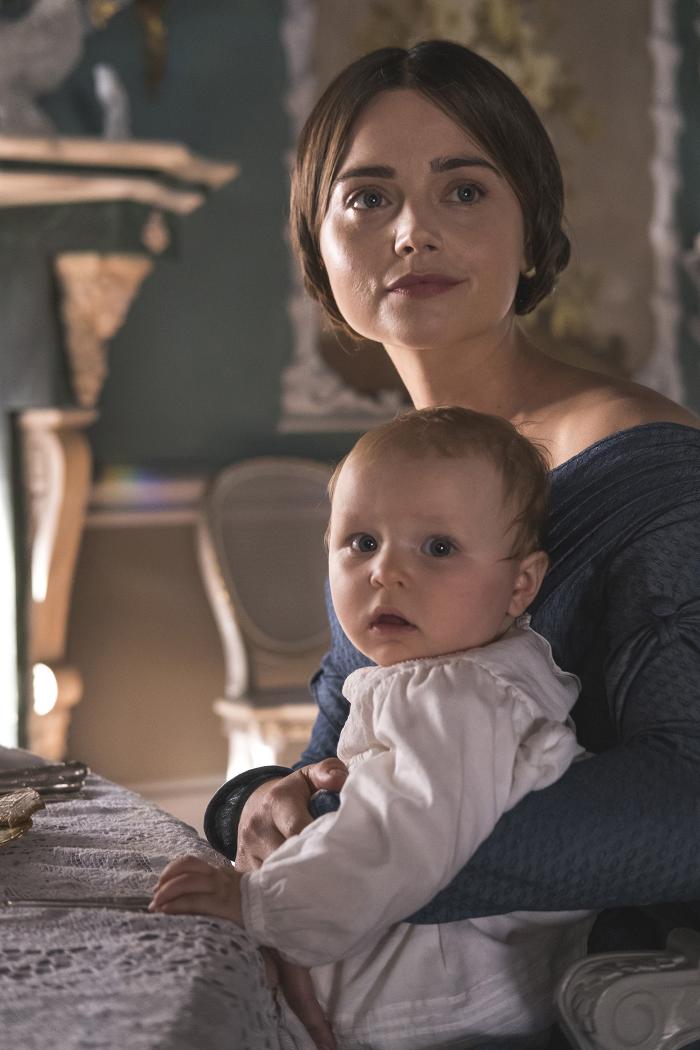 Victoria appeals to Peel's sense of humanity using her own child to convince him to aid the Irish. Photo: ITV Studios Moved by Traill’s stories, Victoria makes her own emotional appeal to Peel. Cradling her youngest child, she asks her prime minister to think of the starving Irish children. Though he says it will tear his party apart, he finally advocates in Parliament for sending relief to the Irish.

While Victoria crusades on behalf of the Irish, Albert undertakes his own public health campaign. He wants to improve public sanitation by supporting a commission seeking to modernize London’s sewers, starting with the palace. Thanks to Albert, the palace – including the servants’ quarters – now has flushing toilets.

Albert attempts to curtail disease; Ernest, lately shown up at Buckingham, suffers from it. The lothario has contracted some sort of sexually transmitted infection and is attempting to treat it with calomel, aka mercury chloride. When that proves ineffectual, he ups the ante by undergoing sessions in a room full of mercury vapor. This seems to do the trick – though it can’t be good for his health otherwise – and Ernest’s sores disappear. Right on time, given that his old flame Harriet’s husband has just died. Unfortunately, Ernest’s doctor warns him that he could still spread his infection, so he must abstain from concourse with her, or any other woman.

Traill returns to Ireland and soon catches his own illness. But first, he further angers his fellow clergymen by collaborating with a Catholic priest to bring aid to the starving. Then he loses his entire family: when he decides to turn his home into a soup kitchen, his wife leaves him with their children, vowing that she won’t return. Soon, he’s not there to return to.  Typhoid fever claims Traill, making him just one of a million Irish who died during the famine.

The watch Cleary sent her family has arrived too late, and they are evicted. They decide, like two million other Irish citizens, that they stand a better chance in America. They will sail on the next boat, leaving Cleary all alone.