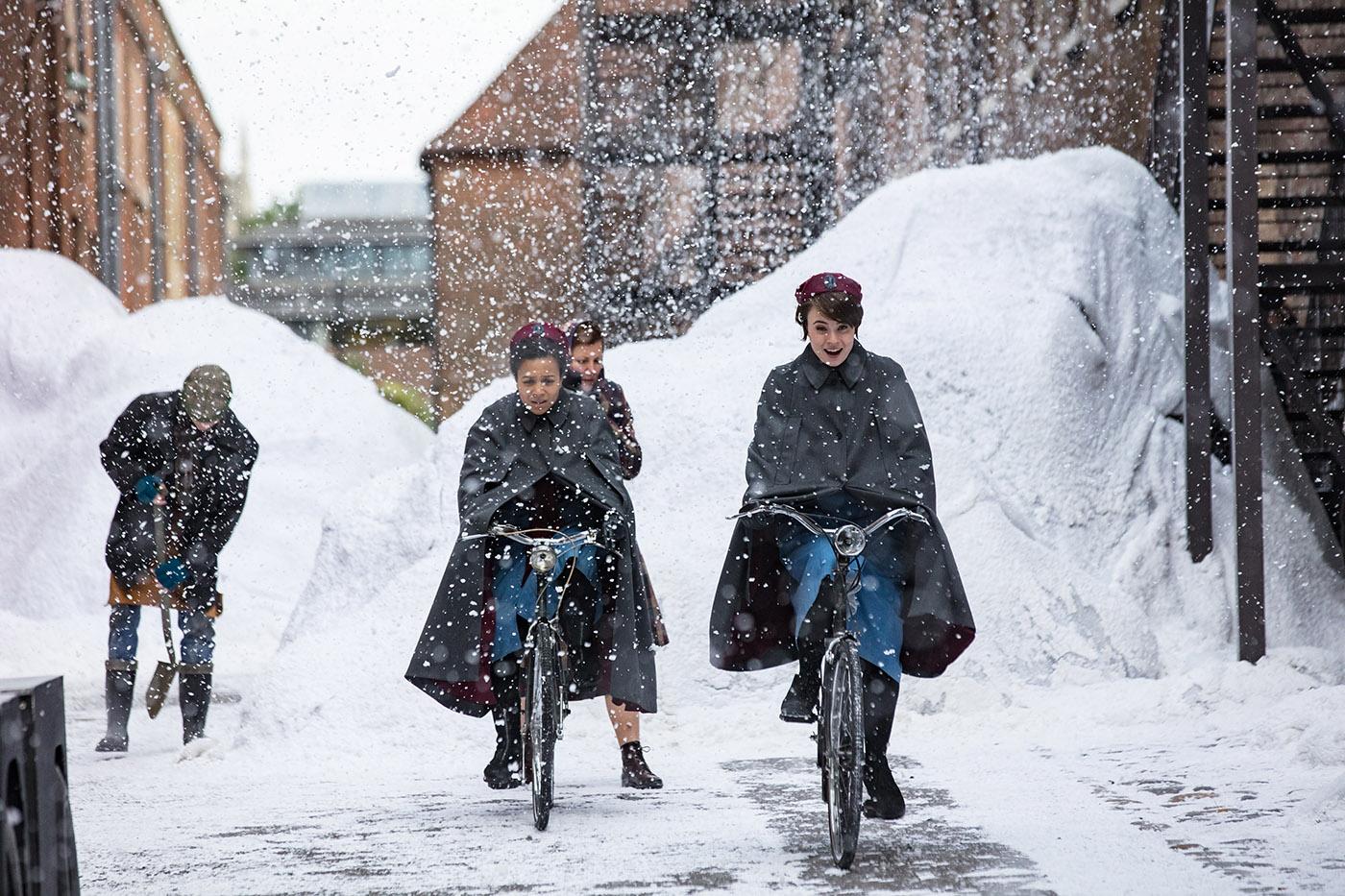 The record-breaking winter of 1963 continues, and Nonnatus House's new midwife is quickly put to work despite difficulties with the snow. Photo: Neal Street Productions 2017

Recap Call the Midwife's holiday special and the following episode.

The record-breaking winter of 1963 continues, bringing more difficulties – like scheduled power cuts – as it drags on. Sister Julienne assigns Sister Monica Joan to keep the residents of Nonnatus House apprised of the power cut schedules, which are published in the newspapers, but Monica Joan’s age and deteriorating eyesight lead to a mistake that causes her to break down: she hates that everyone cossets her out of fear that her mental ability is going.

Sister Winifred is also on edge: her driving test is in two weeks, weather permitting, and she’s still afraid of driving.

All the snow and ice are not making it easy for Winifred to practice her automobile skills, but they’re impeding another midwife even more. A new nurse has been assigned to Nonnatus to replace Barbara – who has moved to Birmingham with her new husband Tom – but she’s so delayed by the weather that Nurse Crane notifies the police of a possible missing person. 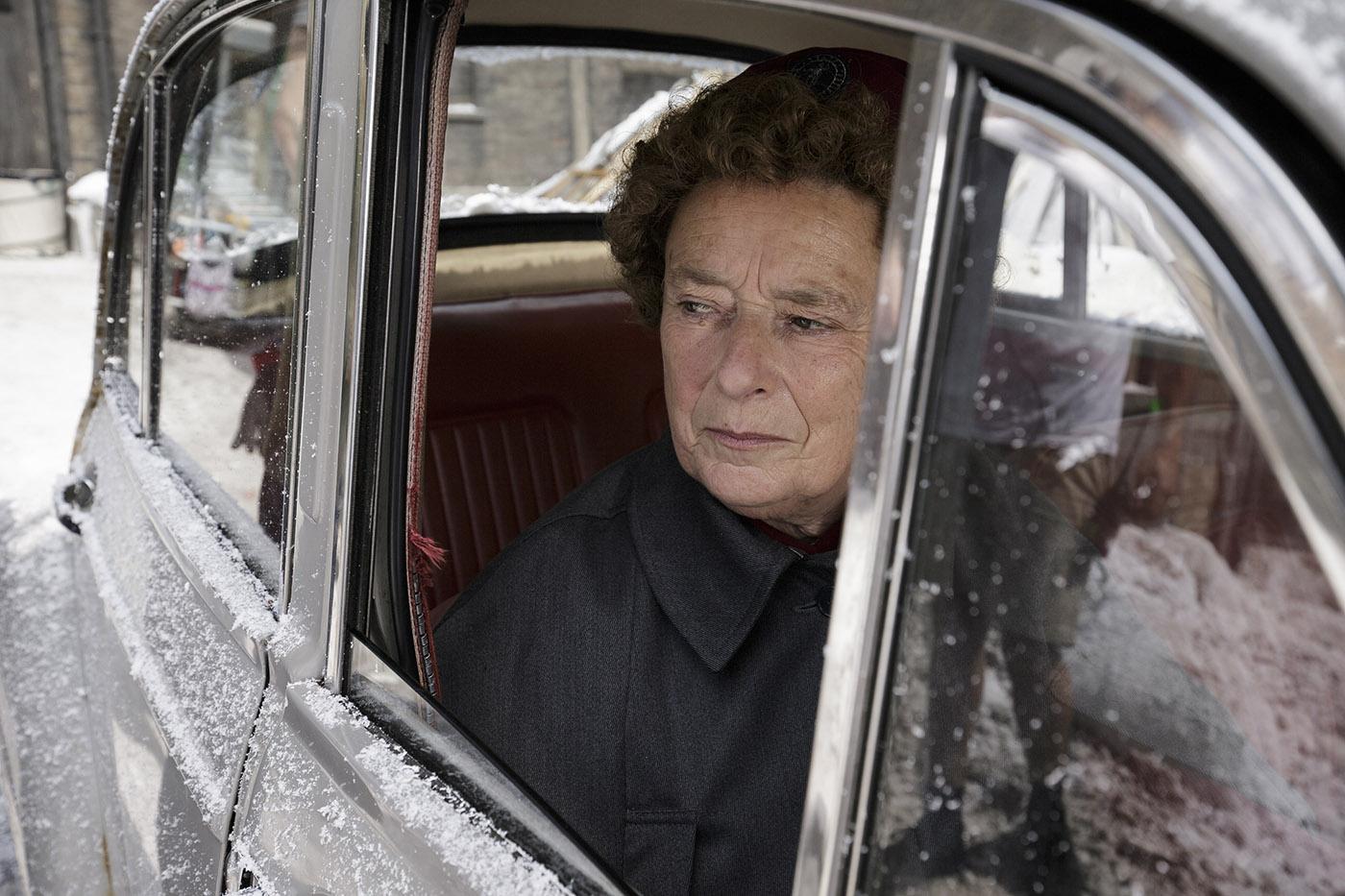 When the new midwife doesn't show up on time, Nurse Crane, her soon-to-be roommate, worries that she's in trouble. Photo: Neal Street Productions 2017

Nurse Lucille Anderson finally arrives two days late, stumbling up to Nonnatus during a storm without any luggage. Her train got stuck in the snow and had to be evacuated after sitting for hours, with the luggage left behind. She is welcomed by a laid-out uniform and warm bed in her room, which she’ll share with a reluctant Nurse Crane.

A long night of sleep doesn’t do enough to help Lucille cover from her travails, however. When she reports for duty in the morning, she collapses. She has a bladder infection, and will be laid up for a week. While she rests, she bonds with Monica Joan over the sister’s collection of books – Lucille was a librarian back home in Jamaica before coming to England to train as a midwife.

Lucille is thrown into the thick of things before her week of recuperation is over when Trixie calls for help with a breech birth and all the other midwives are out helping other women. Nadine, the woman giving birth, has no friends or family to be with her. She worked as a stripper until her pregnant belly became too big to hide, and plans to give up the baby for adoption. She hasn’t even thought of a name, because it will just be changed by the adoptive parents anyway. 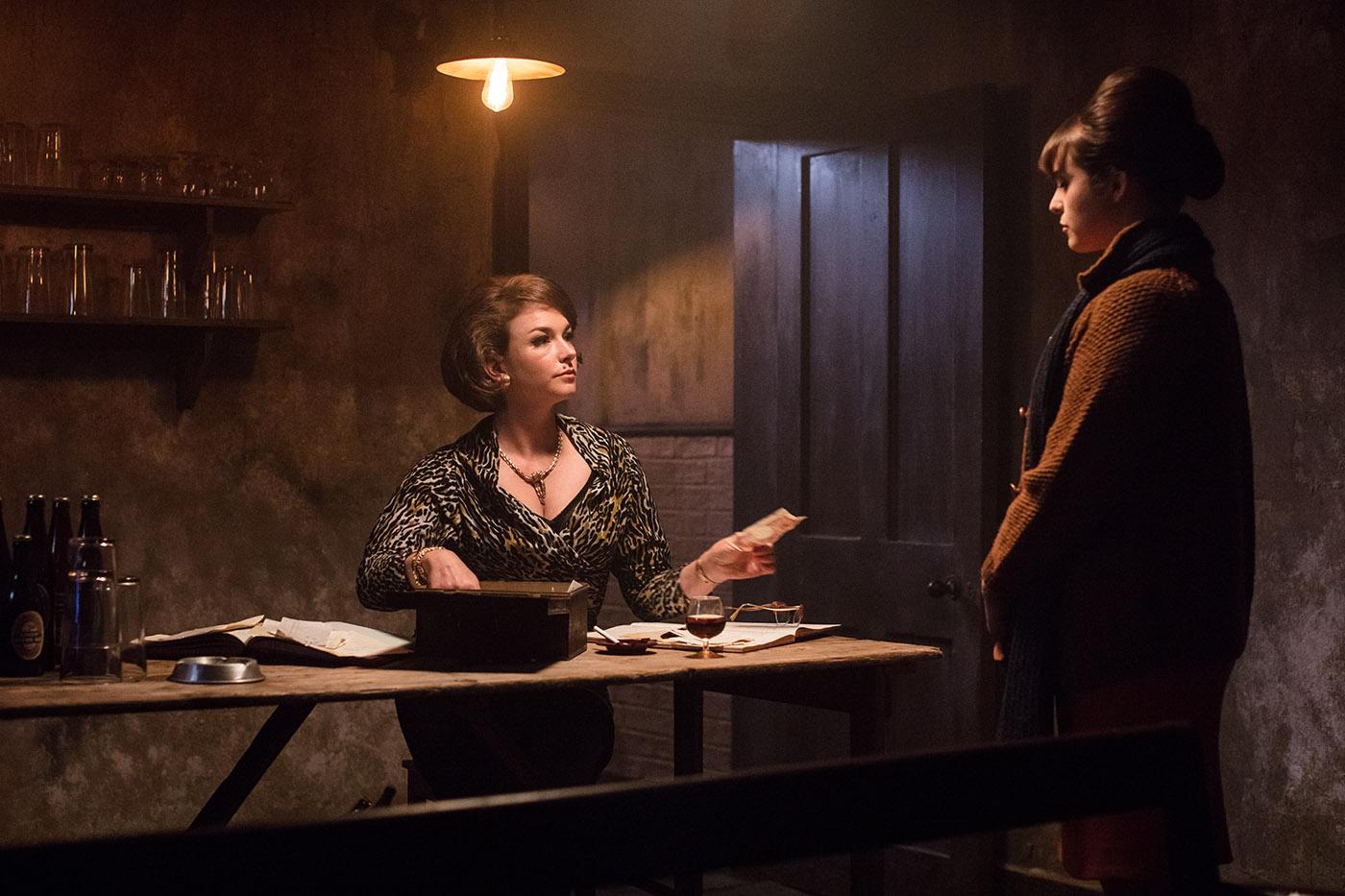 Nadine, who was a stripper until her pregnant belly became too big to hide, is planning on giving up her baby for adoption. Photo: Neal Street Productions 2017

Nadine has a blood marker that could mean the baby will have a health complication, but only if it’s not her first child. She has already assured Trixie that she hasn’t given birth before, but in the throes of labor she reveals that she has had an abortion. The child could thus have the complication, depending on the father’s blood work – but Nadine doesn’t know anything about him, not even his name.

The birth goes smoothly under Trixie and Lucille’s care, but the baby girl is soon rushed to the hospital because of jaundice. At the hospital, Nadine discovers that she has a connection to Valerie: she took dance lessons from the nurse’s aunt. That aunt has now retired, and Valerie is teaching the classes until a replacement is found.

After spending time with her baby through its illness, Nadine decides to keep the now-healthy child after all. She names her Elizabeth, and embarks on a new life: she’ll buy the dance school and take it over to earn wages to raise her daughter.

A less hopeful story is unfolding over on Peninsula Street, where a row of homes has been ordered vacated for demolition. Despite their daughter’s urgings that they move in with her, the Gelins don’t want to leave the house they worked so hard to buy. Mrs. Gelin’s ill health would also make a move difficult. Her cancer has returned and is spreading, and she doesn’t have much longer to live, though she tries to hide that fact from her son whenever he calls from America. 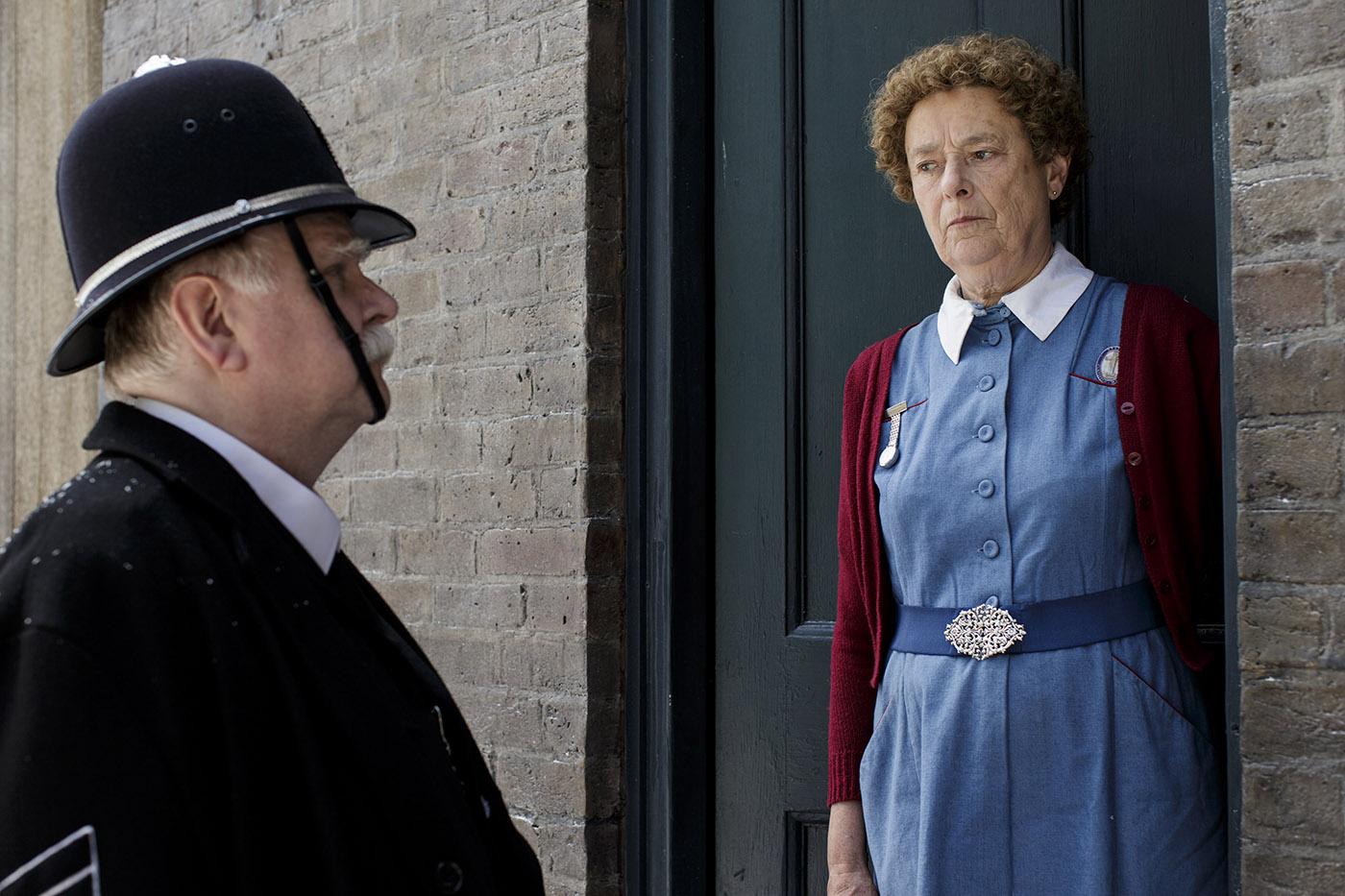 While an old woman dies in a home scheduled for demolition, Nurse Crane tries to fend off eviction. Photo: Neal Street Productions 2017

During one of Nurse Crane’s follow-up visits, she answers a knock at the door to find her policeman nemesis, Sergeant Woolf. He informs her that the Gelins’ utilities will soon be shut off. Nurse Crane is again at the home, where Mrs. Gelin is on the verge of death, when the sergeant tries to evict the Gelins. While Crane implores him to let the couple stay until Mrs. Gelin dies in the comfort of her own home – the Gelins didn’t flee Germany during World War II to be chased out of their own home – the phone line, Mrs. Gelin’s only connection to her son, is cut.

Sergeant Woolf is moved by Nurse Crane’s plea and sets about getting the phone restored and the demolition delayed. When Nurse Crane returns to Nonnatus after Mrs. Gelin’s suffering has finally ended, Lucille – whose luggage has finally arrived – has a hot water bottle and fudge waiting for her. Perhaps having another roommate isn’t so bad after all.

In return for Nurse Crane’s care, Mr. Gelin, a retired baker, gives her a strudel – the last thing baked in his kitchen before he moves in with his daughter. And Nurse Crane in turn shares that with Sergeant Woolf, in return for his help.

In spite of her fear, Sister Winifred manages to pass her driving test. Shelagh decides to get an au pair to help with the kids and housework. And Trixie, despite initial trepidation, decides she’s ready to spend a night – alone – with Christopher.