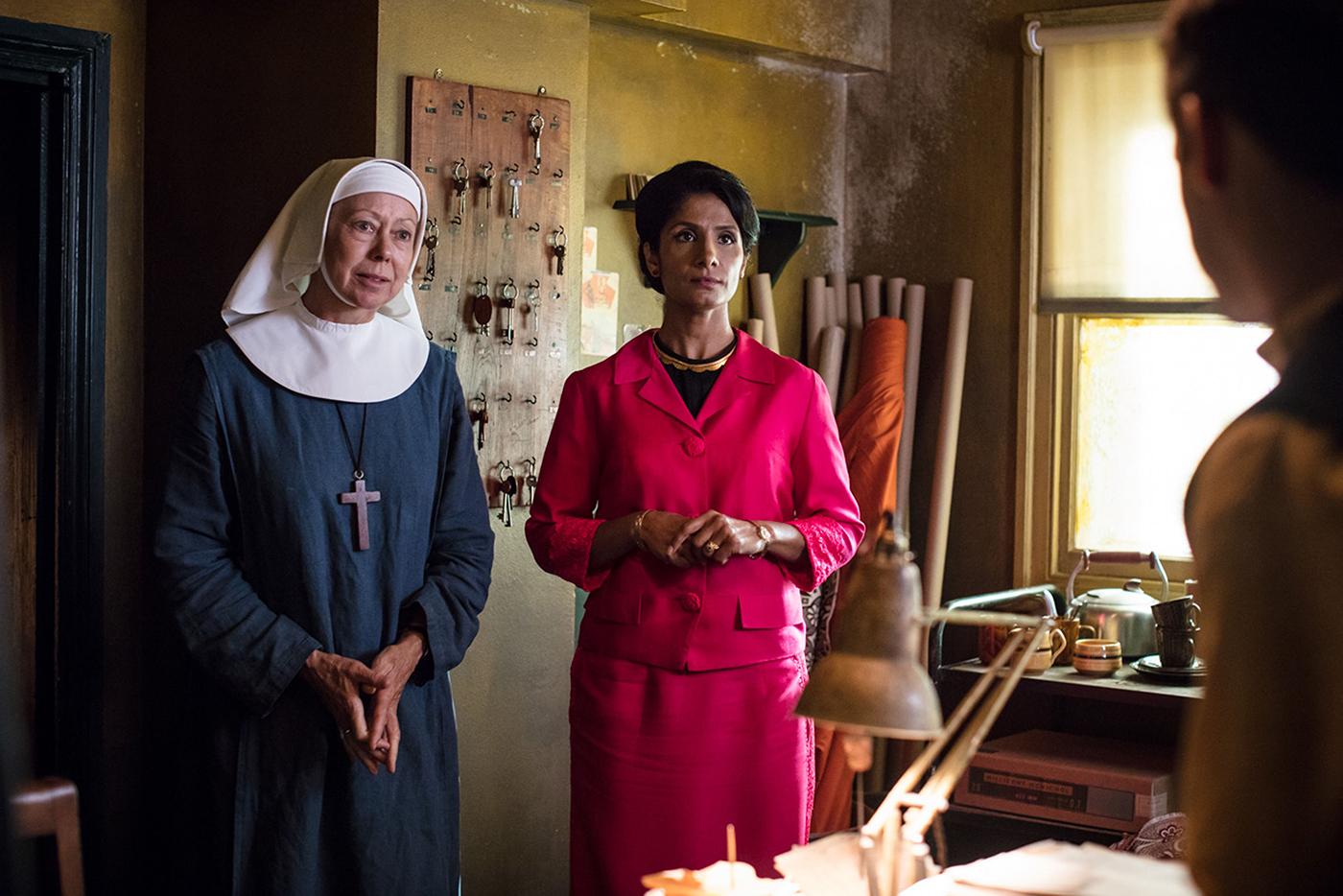 Mumtaz and Saddiq Gani give their textile firm the same attention they would a child, but their domestic situation is upset when Saddiq returns from a trip home. Photo: Neal Street Productions

Having broken up with Christopher for the sake of his daughter, Trixie is once again searching for solace in drink. She sympathizes with a pregnant woman afflicted with pica, which causes the woman to crave coal: both have a secret addiction of which they are ashamed and which they go to great lengths to indulge without anyone finding out. Fortunately for the mother, her craving goes away once she gives birth to a healthy girl. There’s no such easy out for Trixie, who breaks midwifery rules by accepting a congratulatory drink after delivering the baby girl. 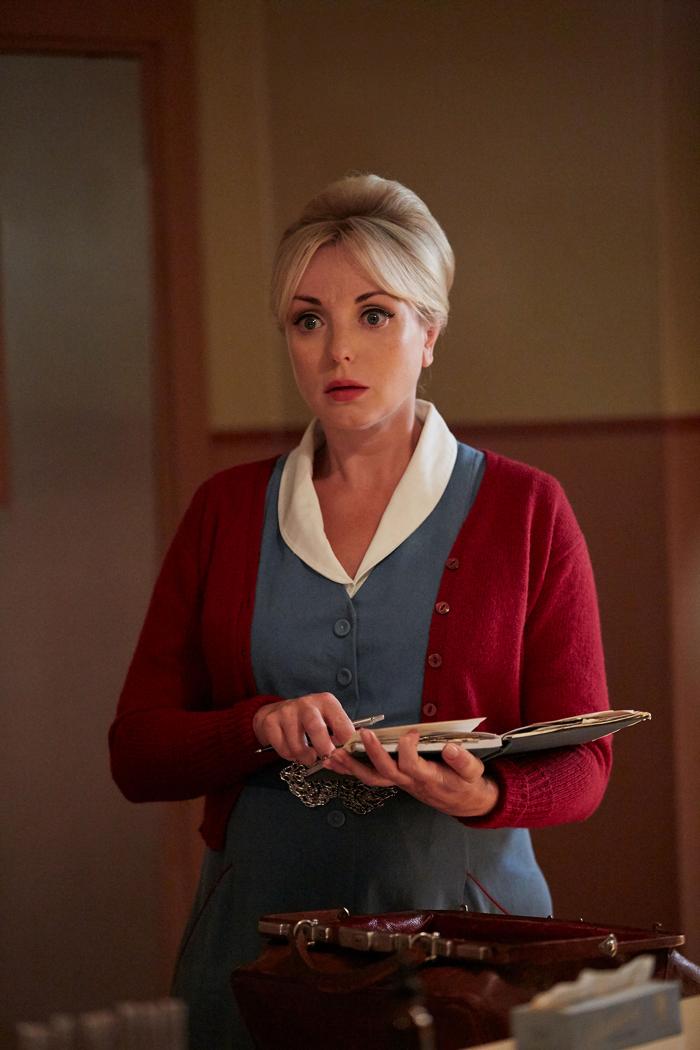 After breaking up with Christopher, Trixie has once again turned to drink. Photo: Neal Street Productions When Nurse Crane visits the new infant the next day for a check-up, she hears about Trixie’s drink. Conscious of Trixie’s pain after the breakup, Crane has given her a lighter workload, and she once again intervenes out of concern. She confronts Trixie, promising not to report her as long as Trixie resumes attendance at her AA meetings. Nurse Crane even sees Trixie off, offering a ride that Trixie refuses.

Trixie walks into a meeting, hesitates, and leaves before it starts. Back at Nonnatus, she locks the bathroom door, runs the water, and swigs from a bottle.

The next time Trixie returns to Nonnatus, Christopher is waiting outside. He offers his support, and Trixie opens up about her battle with alcohol – although she’s not happy that Nurse Crane told Christopher she was struggling. Christopher convinces Trixie that, despite her proud independence, she needs help. He drives her to an AA meeting and waits outside.

When Trixie emerges, she tearfully tells him that they can’t see each other any longer – it’s too much of a strain. She returns to Nonnatus alone and apologizes to Nurse Crane for refusing to accept her help. Then she tells Crane that she needs to go away and tend to herself for a while. The next day, Sister Julienne grants her a six-month leave.

Julienne is concerned about another Nonnatus House resident as well. Monica Joan has gotten testy as her eyesight fails, but she’s trying to hide her deteriorating condition. Yet when she leaves her magnifying glass, used for reading, in the garden, Fred finds it and she admits her reliance on it. He in turn tells Julienne, who brings in Doctor Turner. The doctor suspects Monica Joan has cataracts, and refers her to a specialist. 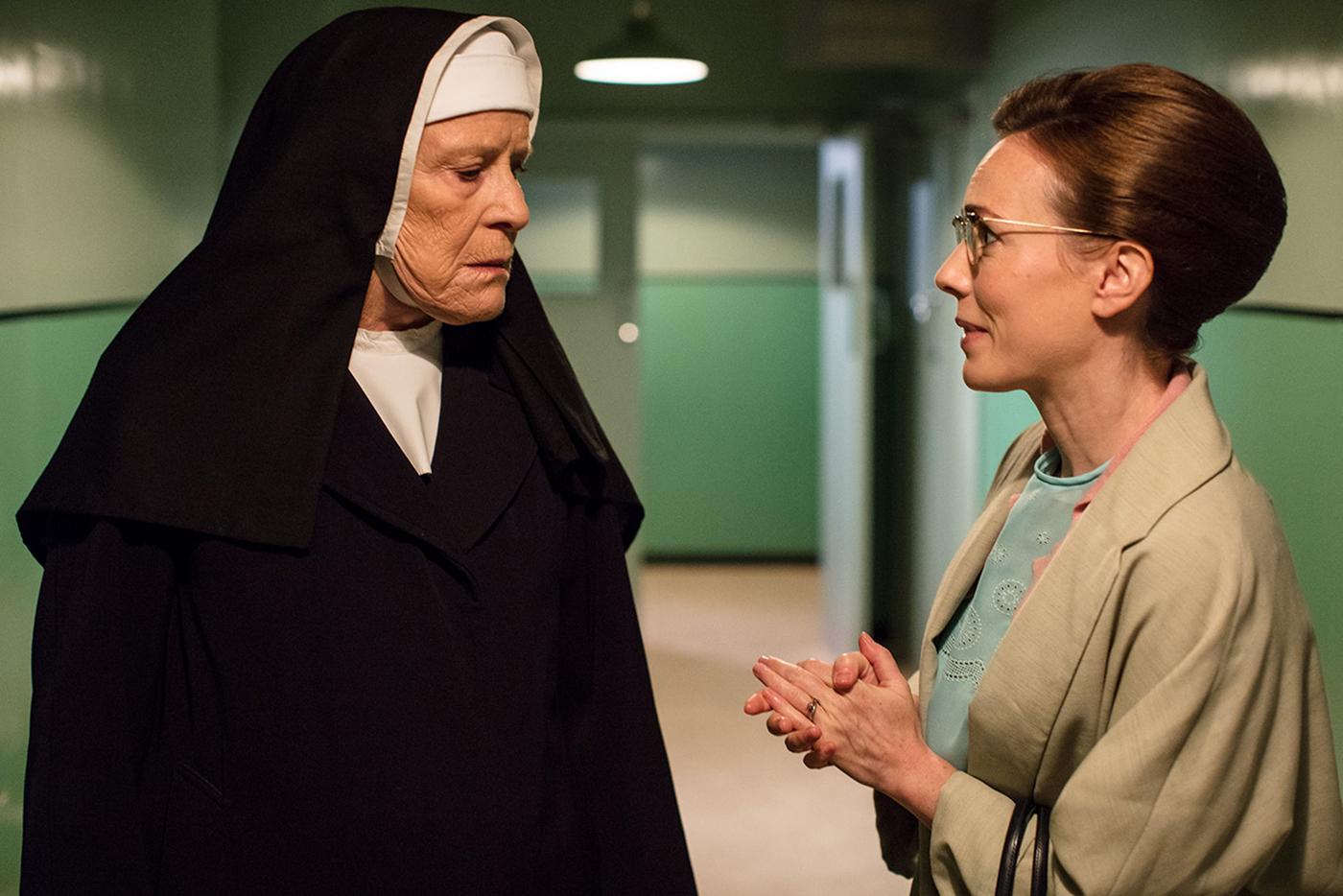 Shelagh accompanies Monica Joan to the ophthalmologist, who recommends surgery to restore the sister’s vision. But she is afraid, and refuses. Rather than force Monica Joan into surgery against her will, Shelagh and Julienne decide to start preparing her for blindness. Shelagh brings Braille instruction books and suggests that Monica Joan get a cane soon.

Fred, however, won’t accept the sister’s refusal. He kindly refutes her reasons against surgery and inspires bravery in her by referring to Valentina Tereshkova, the first woman in space, who has had Monica Joan and the other sisters glued to the television lately. Monica Joan agrees to get the surgery.

And there’s another woman outside Nonnatus who also requires Julienne’s care and love. Mumtaz Gani has known her husband Saddiq since they were children. They own a textile firm in Poplar, directing as much energy toward it as they would to the child they’re unable to have. But when Saddiq returns to his home country for a funeral, he comes back with a young bride – and she’s pregnant.

The families of Mumtaz, Saddiq, and Parveen – the young bride – arranged for this unusual marriage. Mumtaz knew nothing of it until the pregnant Parveen appeared with Saddiq at the Ganis’ home in Poplar. 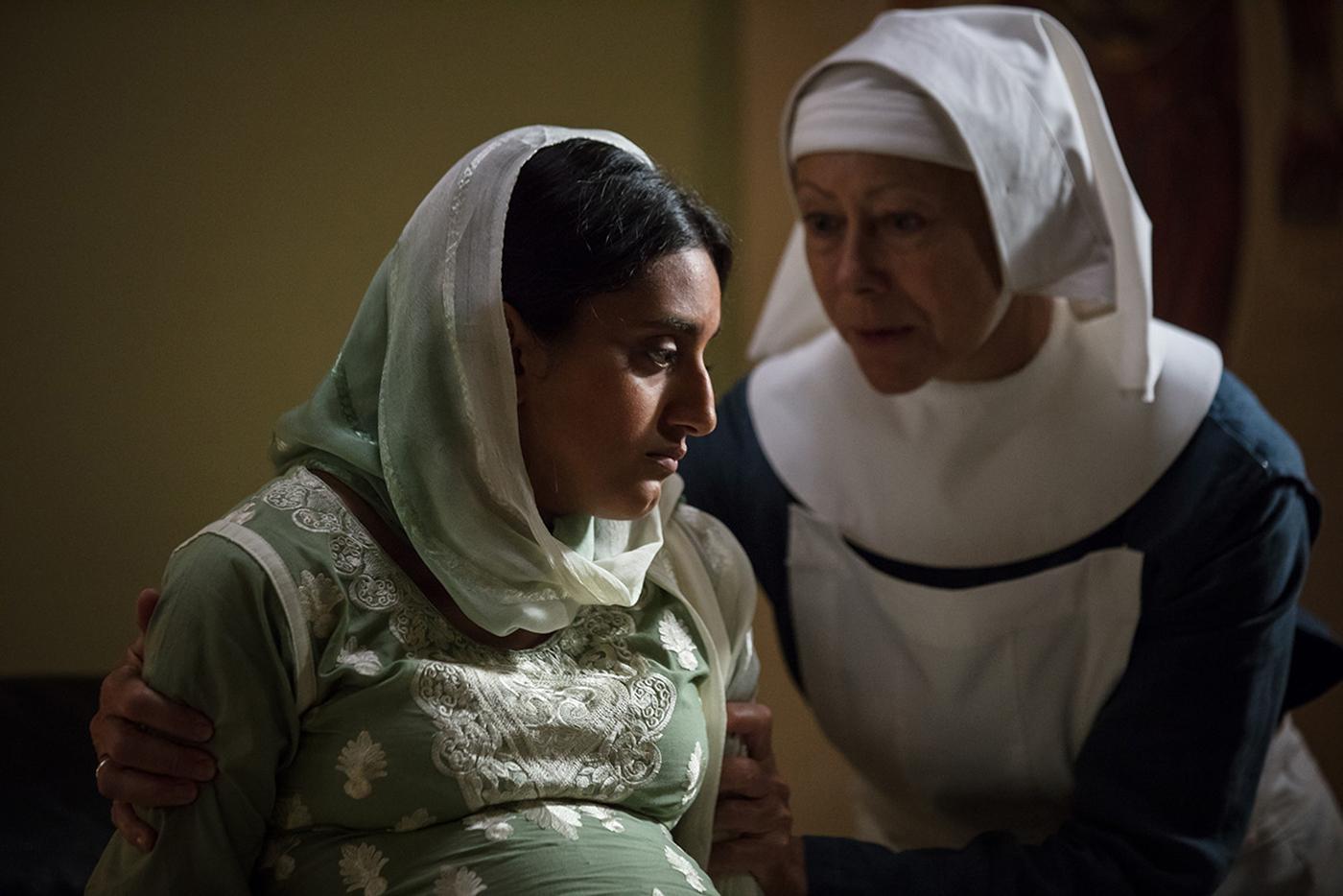 The arrival of the pregnant Parveen in Poplar creates an odd and difficult situation for the Gani family. Photo: Neal Street Productions

Sensing the domestic discomfort, Julienne sits down with Mumtaz to comfort her. Mumtaz explains that the situation is especially frustrating since she herself cannot have children. Julienne decides to book Parveen into the maternity ward for her birth, to allow Mumtaz the space at home to acclimate to her new family.

When Parveen goes into labor, Mumtaz decides to watch and help. She speaks to the young girl in Punjabi, comforting her through the process. Once the child is born, however, Mumtaz once again withdraws from any warm relationship with Parveen.

But Parveen is suffering from postpartum depression and is uninterested in caring for her new baby. Julienne goes to the textile firm to appeal to Mumtaz for help, but Mumtaz refuses. While she continues to angrily sew, she badly cuts her hand on the sewing machine. Julienne calls for Doctor Turner, who bandages the hand and explains the happiness his own unconventional family brings him, showing Mumtaz that she can be a mother even if she can’t give birth.