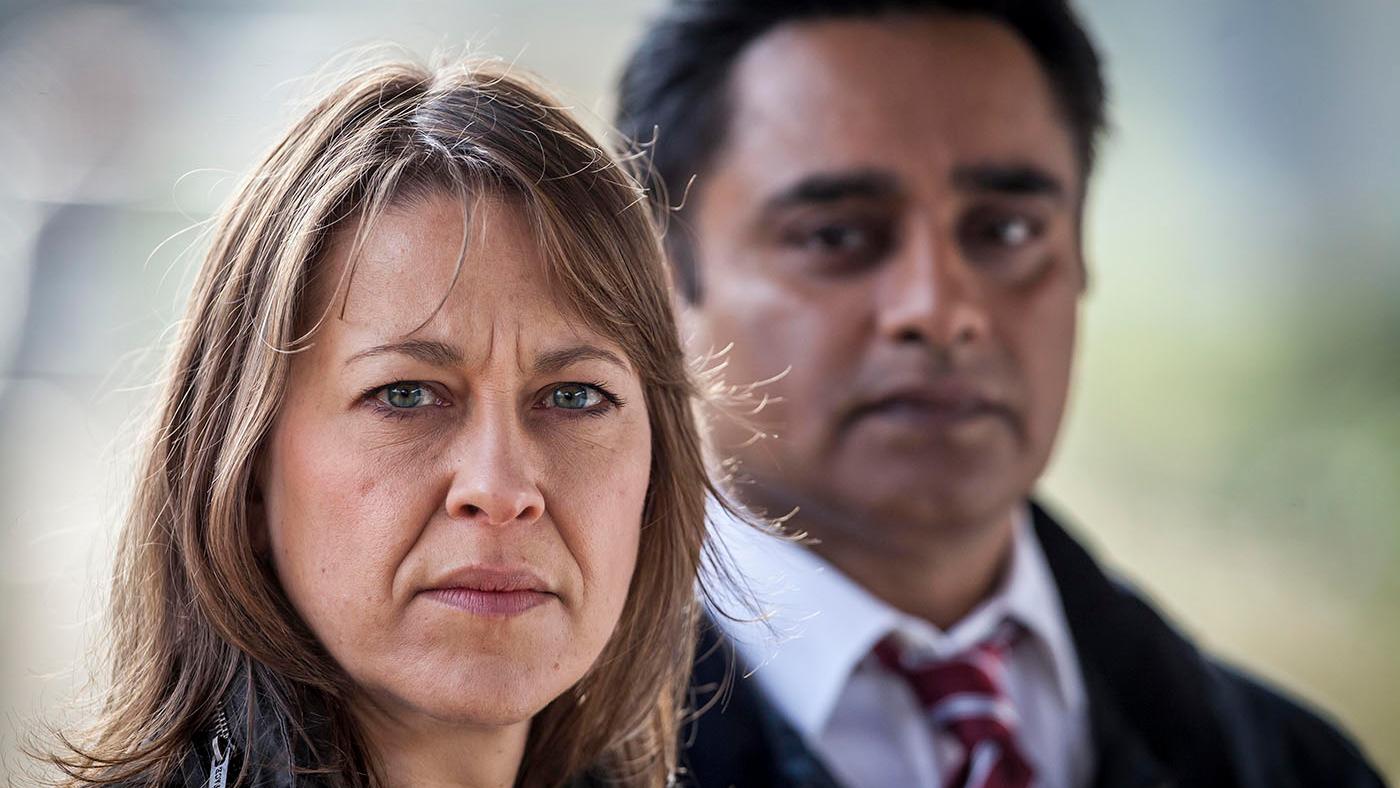 Cassie Stuart and Sunny Khan are determined to discover the identity of an unearthed skeleton and its murderer. Photo: John Rogers/Mainstreet Pictures

Unforgotten is available to stream. Read our recap of the following episode.

The building is from 1886, on the northwest side of London. A skeleton is found below the concrete floor in the cellar, with blunt trauma to the skull. How old is it? Who is it? Where is it from? Detective Cassie Stuart is determined to find out, with the help of her colleague Sunny Khan.

Luckily, there is one clue: a key found with the bones. From the shape and composition, the crime lab determines that it’s an ignition key for a car from the 1950s or later. A barely discerned serial number leads the detectives to records that show the buyer of the car: Stephen J. White. But White is dead. His widow explains that the 1965 car was stolen from outside their house on Christmas 1975.

A seemingly fruitless search of scrap shops and their records eventually turns up a reappearance of the car in the late ‘70s. It was then sold in 1981. The man who bought it still has it – but it’s in pieces. Yet amongst those is a bag containing sundry personal items, including a waterlogged, unreadable diary dated 1976.

Except it’s not unreadable, at least not after the lab gets to it. They’re able to recover the writing and find both an inscription – James “Jimmy” Niall Sullivan received the journal from a “Jo-Jo” – and pages listing some names and phone numbers. 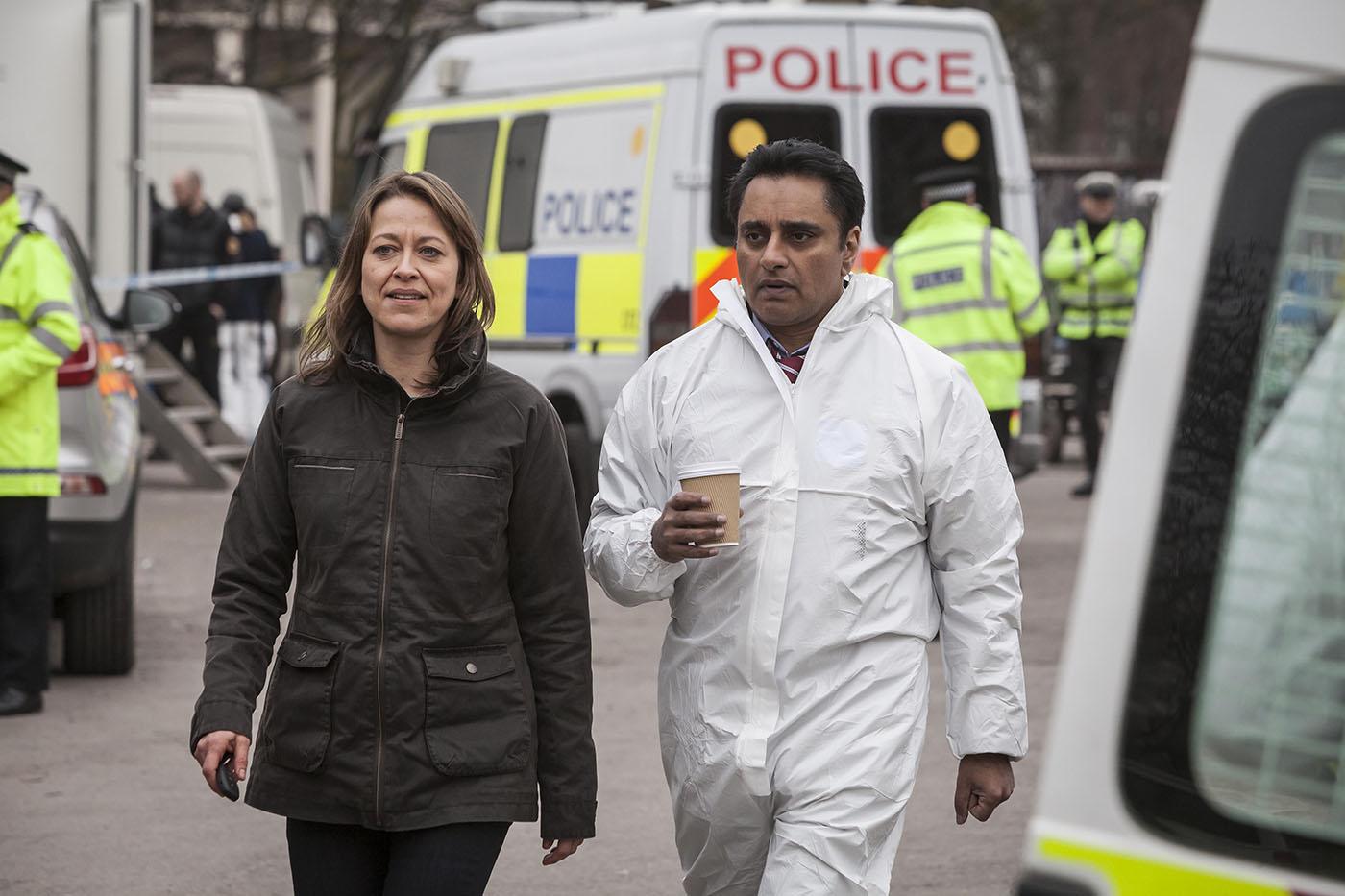 We’ve already been introduced to some of these names, though Cassie and Sunny have yet to meet the characters. There’s the wheelchair-bound Eric Slater, whose wife Claire’s dementia seems to be covering up some trauma – she occasionally storms out of the house with a suitcase, accusing Eric of some terrible thing, only to be found outside her sister’s former home. Eric’s son Les wants to move his parents into a home, and Claire seems to want to go, but Eric refuses.

Sir Phillip Cross – the “sir” is newly minted – has just been appointed a government tsar for entrepreneurship, but his family life appears less successful: his daughter is slightly distant, and he refuses to do a simple favor for his son’s own business.

Father Robert Greaves is a popular priest, but some two thousand pounds somehow went missing from his community program and his supervising bishop wants to find it. Worse, the community center has been robbed. Robert’s daughter is also getting married, and Robert manages to force the wedding into a church despite her fiance’s wishes – Robert always gets his way, his wife complains, despite his generosity with his own money to his parishioners.

Lizzie Wilton and her husband Ray lost their son at 15, but they prove loving surrogate parents to the boys Ray coaches in soccer. Lizzie has lately been helping Curtis study for his exams. 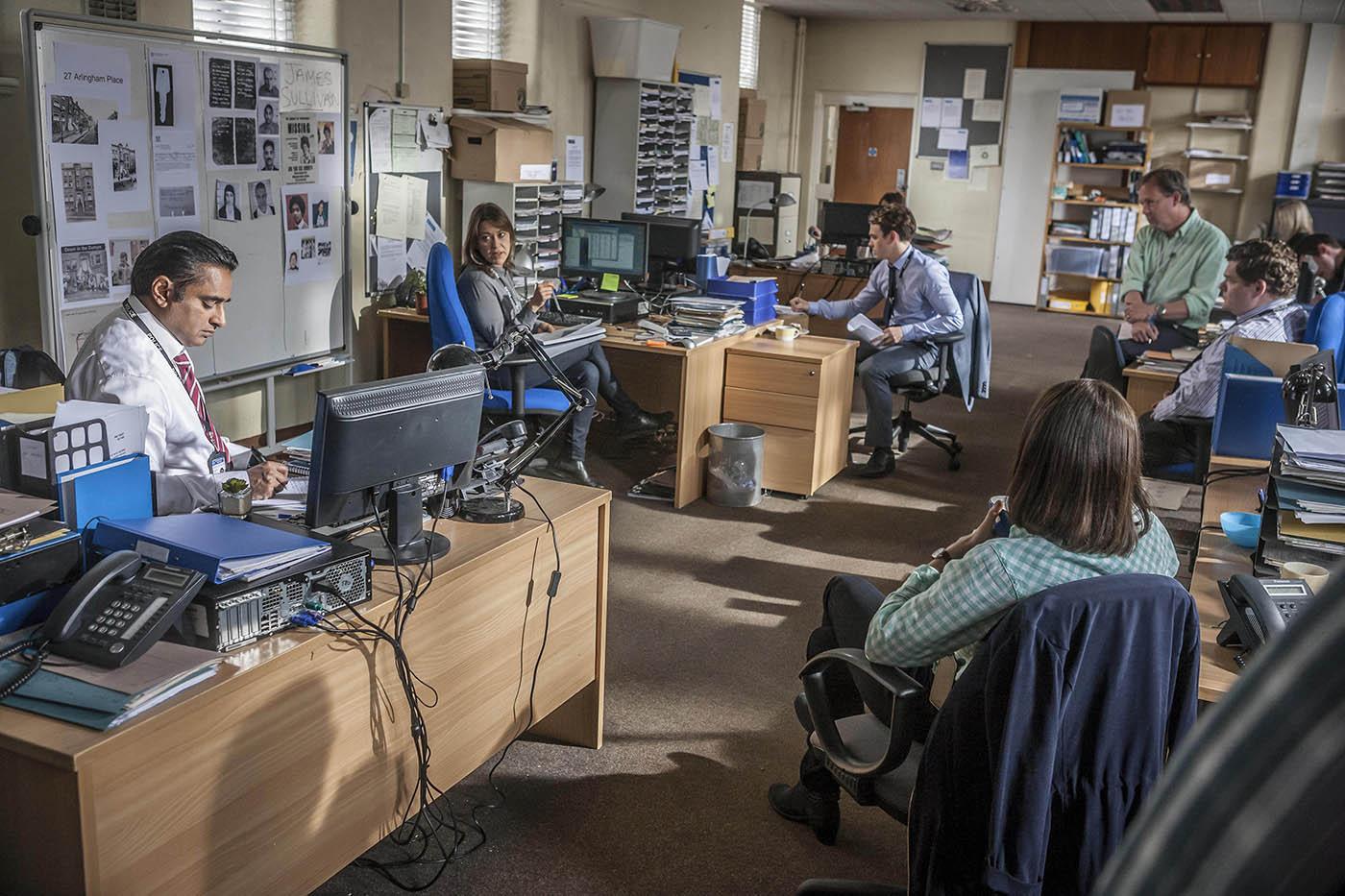 The work of an entire detective team turns up some leads on the names in Jimmy's diary. Photo: John Rogers/Mainstreet Pictures

But Lizzie once had a different name, and a very different persona. When the detectives call the number listed for “Beth,” they learn that she once rented a room from the person associated with that number. The landlord had to kick out Beth – and the boyfriend staying with her – for not paying rent. Also, both Beth and the boyfriend were skinheads, something reflected in their criminal records, which include decades-old assaults of West Indians and Pakistanis.

The boyfriend died in jail, but Sunny and Cassie track down Lizzie. She claims not to remember Jimmy, or much of the ‘70s – she had some problems then. When the criminal record is brought up, she says she was trying to stop her boyfriend from assault. “How could I be a racist?” she interjects, pointing at her black husband and the young black men she mentors.

Whatever she says, she did often stay in the building where Jimmy’s body was found, back when it was a hostel, sometimes at the same time as Jimmy, according to records.

Jimmy lived in the hostel while he worked in London. His mother got pregnant at fifteen and was disowned by her parents, she tells Cassie when the detective leaves London to visit her. Jimmy’s father, a Barbadian immigrant, was a drunk who beat his wife and son. Jimmy ran away to London, hoping to put aside enough wages to save his mother from his father. He maintained a steady correspondence with his mother, but the letters eventually fell off. After a few months, his mother reported him missing to London police; they assumed he had just run off again, and Jimmy’s mother never knew for sure if he was alive or dead. 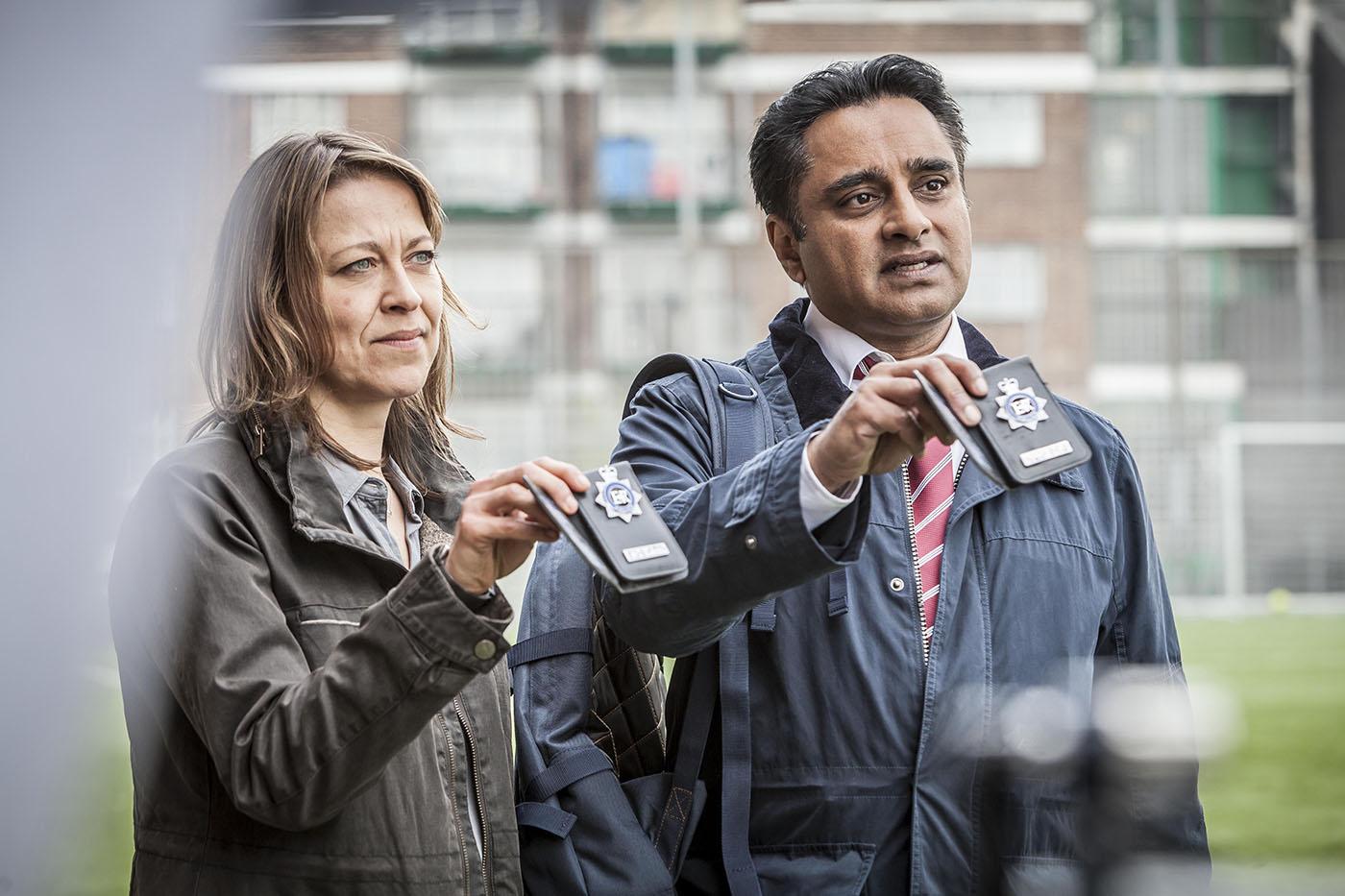 Cassie and Sunny interview various people about Jimmy, but they all claim a suspicious amount of ignorance. Photo: John Rogers/Mainstreet Pictures

No one else seems to know anything about him either, or so they claim. Sir Phillip feigns ignorance when Cassie and Sunny come to see him, but his short-tempered responses belie dark secrets. He was listed in Jimmy’s diary as “Frankie C,” a name he used to go by back when he worked for the Fenwicks, a notorious family. The number next to “Frankie” in the diary is registered to a Fenwick who has had three murder cases raised against him, though none stuck. Needless to say, Phillip is retaining a lawyer, and his government handlers are not happy that an investigation has touched him – nor is he happy that the government is peeved.

Phillip’s connection to the hostel Jimmy stayed in is unknown, but Eric Slater was the bookkeeper there, and Father Robert is often mentioned in connection with the hostel in Jimmy’s letters to his mum.

Father Robert seems to have solved the missing money issue for the bishop: his assistant simply transferred the money to the wrong place when she was overworked, Robert tells the bishop. Robert has transferred it back to the church now – except that money probably came from pawning a ring pilfered from his wife’s closet.

Worse sins may be lurking in this priest’s past, however: when he learns from the bishop that the police are trying to get a hold of him to discuss a “historical” case, he goes to a telephone booth and rings an acquaintance. “Joanna?” he says to the answering machine. “Jo-Jo? We need to talk.”