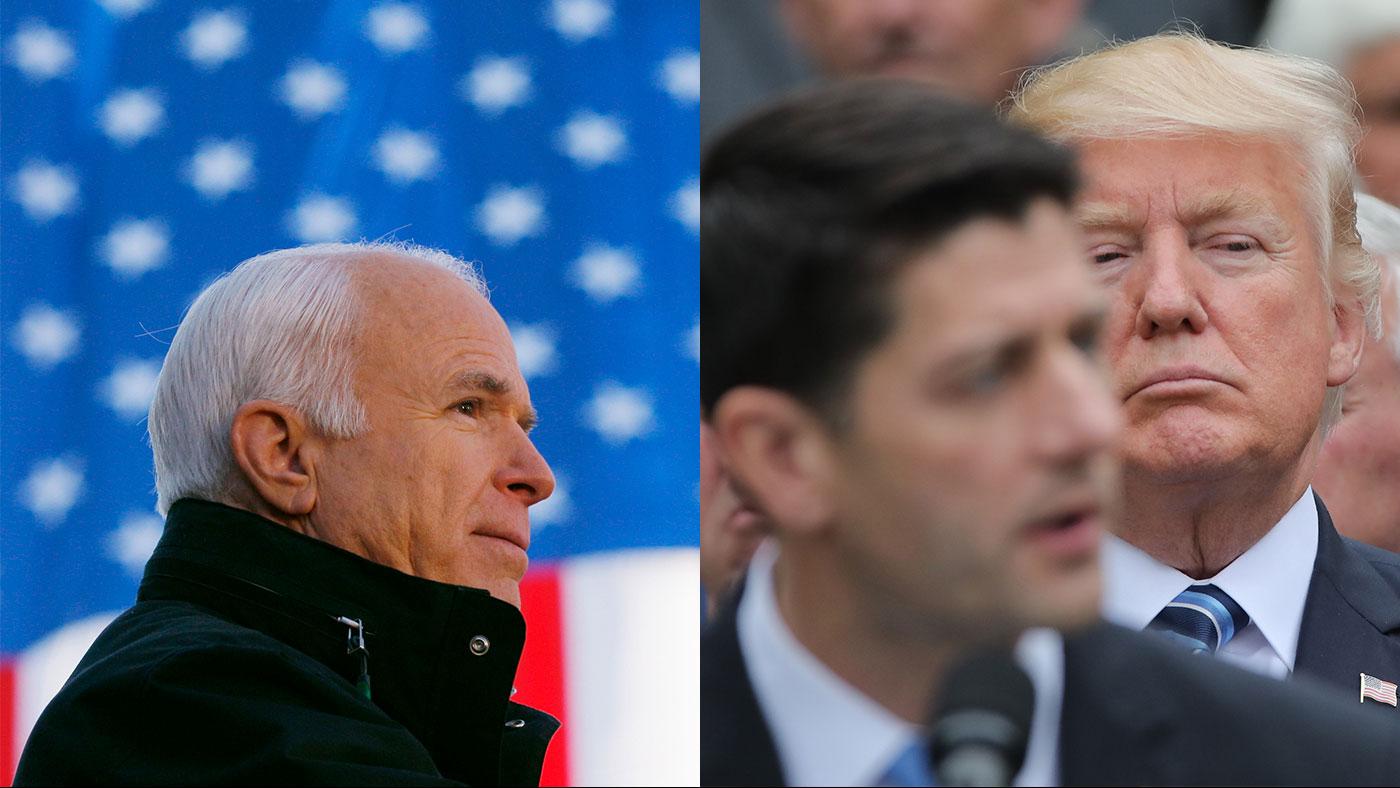 “Donald Trump is in some ways John McCain 2.0,” says Michael Kirk, the producer, writer, and director of two upcoming Frontline documentaries, Trump’s Takeover and McCain. It’s a surprising comparison given the two politicians’ troubled and often oppositional relationship, one that neither man would probably appreciate, but it has merit.

John McCain, who is currently serving his sixth term as U.S. senator from Arizona, has long been a political maverick who bucks Republican Party orthodoxy. In 2000, he ran against George W. Bush in the Republican presidential primary as an independent outsider and won New Hampshire before dropping out, and in 2008 he chose Sarah Palin as a running mate, helping usher to prominence a fiery populist movement that has culminated in the election of Trump.

Trump also followed an outsider tack in 2016, galvanizing a base that had been similarly invigorated by Sarah Palin to win the presidency – Palin even endorsed him. “Trump identified what McCain looked at and didn’t want: the Palin base,” Kirk says. “Trump takes what McCain and Palin started and just quadruples that base, and he manages to do what McCain never could: he gets elected.”

John McCain is thus a tragicomic figure in the drama of Trump and his scrambling of the Republican Party, which Frontline examines in Trump’s Takeover. McCain helped enable Trump’s ascent and exacerbated the divisions amongst Republicans by choosing Palin, but has also emerged as one of the staunchest upholders of traditional politics and Republicanism in his opposition to Trump. His dramatic thumbs-down vote on an attempted repeal of the Affordable Care Act last year, which killed the bill, so enraged Trump that the president attacked McCain – though not by name – at a rally in McCain’s home state. (Trump also infamously derided McCain’s time as a POW, saying “I like people who weren’t captured.”)

The progression from McCain to Trump as Republican presidential candidate is illustrative of the radically changed direction of the Republican Party, and perhaps the end of the GOP as we know it – McCain, who is often held up as an example of old-school bipartisan, independent, pragmatic politics, may be the last of his breed.

“You could make the argument – and maybe we will before it’s all said and done, especially depending on what happens in the midterm elections – that we’re now reaching a sort of three-party system or something like that, and that Trump is really the first independent to win the presidency,” Kirk says. “He’s called himself a Republican, but as Roger Stone says in Trump’s Takeover, it was a hostile takeover. It’s the base that matters in our new political calculus, and that’s more like France or Germany or England than the America we remember.”

Trump’s embrace of an energized, loyal base is a repudiation of the direction that establishment Republicans recommended after the defeat of Mitt Romney by Barack Obama in 2012. “When Romney loses, they do the autopsy and say to themselves, ‘If we’re ever going to win again, we have to get women and Hispanics in this party,’” Kirk explains. “A lot of people, including McCain, believed this was necessary for the party to survive. Trump of course went the complete other way – and Trump won. That marginalizes everybody that once believed that inclusion and immigration was the way of the future for the Republican Party.” (Another extreme difference between the tactics of Trump and McCain is Trump’s willingness “to go low,” Kirk says. “McCain likes to call presidents of every stripe out for things they did, but he would never go low.”)

So where does the GOP go from here? “How long do the Republicans stick with Trump?” Kirk wonders. “It seems like they’re under his protection, trying to stick as close as they can unless something egregious happens, at least until the midterms. After that, those people who might agitate or publicly say I’ve had enough” – politicians like senators Jeff Flake or Bob Corker, both of whom have criticized Trump but are not running for re-election – “they’ll be gone. That means that people who are with Trump, and people who may get elected who are with Trump, will be the ones moving forward, so you can imagine a kind of stability.

“Whether experienced people like Paul Ryan or Mitch McConnell finally just say, ‘I can’t do this anymore,’ will be a function of things happening that we can’t foresee. Different rules seem to apply to this president. A lot of people are left shaking their heads saying, ‘Where do I stand, how do I survive?’”