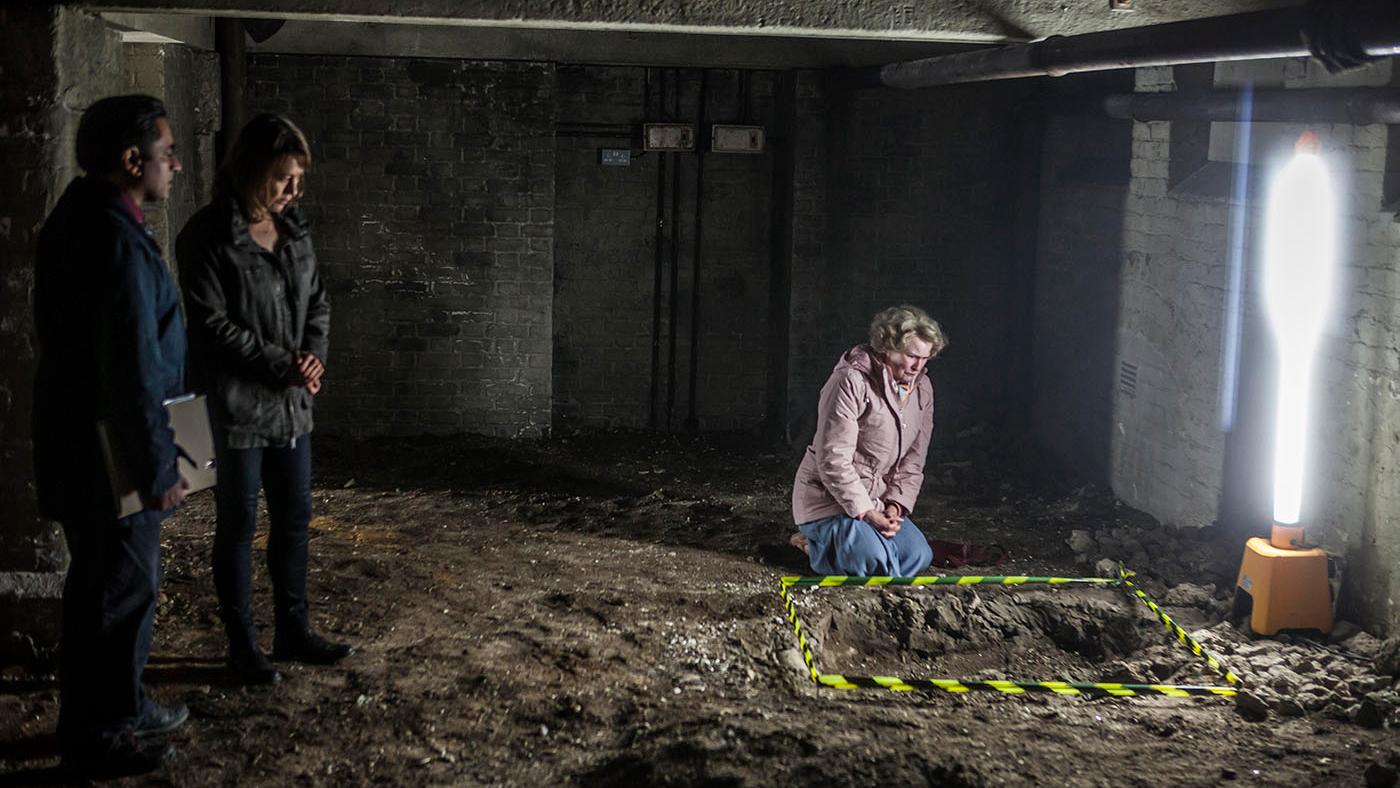 Unforgotten is available to stream. Read our recaps of the previous and following episodes.

Lives can unravel so quickly. Having been questioned by the police about her past as a skinhead, Lizzie Wilton reveals that shameful history to her husband Ray. Her dad became abusive after her mother died, so she fled to the streets of London while still a teenager. There she met Vincent Erskine, who promised he would protect her. But he was a racist, and Lizzie participated in his white supremacy – she sometimes even watched him assault people of color.

Lizzie’s husband Ray, who is black, is obviously upset by this. He feels like he was Lizzie’s penance. As they try to work through Lizzie’s past in the locker room of the football club they manage – Ray took refuge there after Lizzie’s initial disclosure – Curtis, one of the young black men they mentor, overhears. He came looking for Lizzie after she failed to pick him up for his exam, which she’s been helping him study for. Now he runs away, distraught.

Lizzie may insist that she was simply in thrall to Vincent, not a racist, but detectives Cassie and Sunny learn from a West Indian man assaulted by Vincent decades ago that she cursed at and spat on him even if she didn’t beat him. And Lizzie’s not the only person connected to the death of Jimmy Sullivan who’s rewriting her past.

Father Robert Greaves remembers Jimmy fondly when Cassie and Sunny question him – his church was around the corner from the hostel Jimmy was staying in. He doesn’t recognize any other names from Jimmy’s diary – but he’s clearly lying when it comes to “Jo-Jo,” who seems to have been Jimmy’s girlfriend. 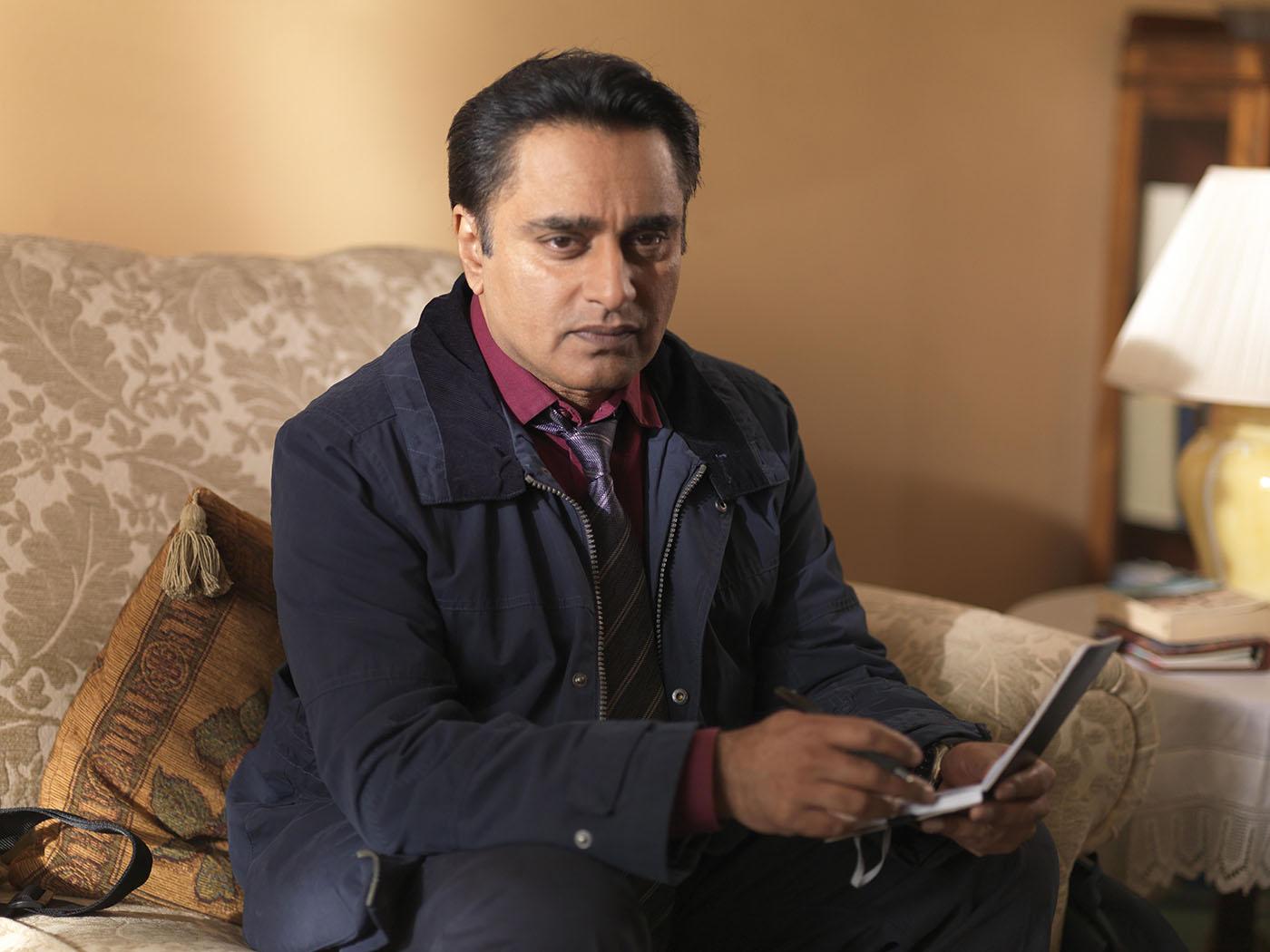 As Sunny and Cassie interview people connected to Jimmy, they begin to learn that everyone is rewriting their past. Photo: John Rogers/Mainstreet Picture

Cassie and Sunny gather evidence of this in their next interview, with Eric Slater, the bookkeeper at Jimmy’s hostel. Eric met Jo-Jo at the hostel once: he walked in on her having sex with Father Robert.

The detectives may also soon catch Phillip Cross in a lie. Although he said he didn’t know Jimmy, he did: Jimmy ran errands for the Fenwicks, the family Phillip worked for. The detectives find a former Fenwick associate who’s willing to talk. He claims Jimmy borrowed 50 quid from the Fenwicks and that Phillip should remember him; Phillip was, after all, the person sent in to persuade people to pay back their loans, by whatever means necessary.

It’s bad enough that the police have heard this rumor about Phillip’s past, but then the Fenwick associate sells his story to the press, claiming that Phillip paid him off to keep quiet. The publicity attracts the attention of Gordon Fenwick, who blackmails his former employee for money. Phillip asks his son’s shady Turkish friends to convince Gordon to keep quiet – whatever means necessary.

But first Gordon sends photos to Phillip’s human rights lawyer daughter of a young Phillip torturing someone by putting a nail through a hand. Is it a coincidence that Jimmy’s skeleton shows signs of the same torture?

Unlikely. Another resident of Jimmy’s hostel has seen a photo of Jimmy in the paper and gotten in touch with the police. The man, Mackie, says he was friends with Jimmy, and that the 50 quid he borrowed was for an abortion for Jimmy’s girlfriend. But Vincent heard Jimmy had money and planned to rob him with Lizzie. Mackie never saw Jimmy again after hearing about Vincent’s plan. 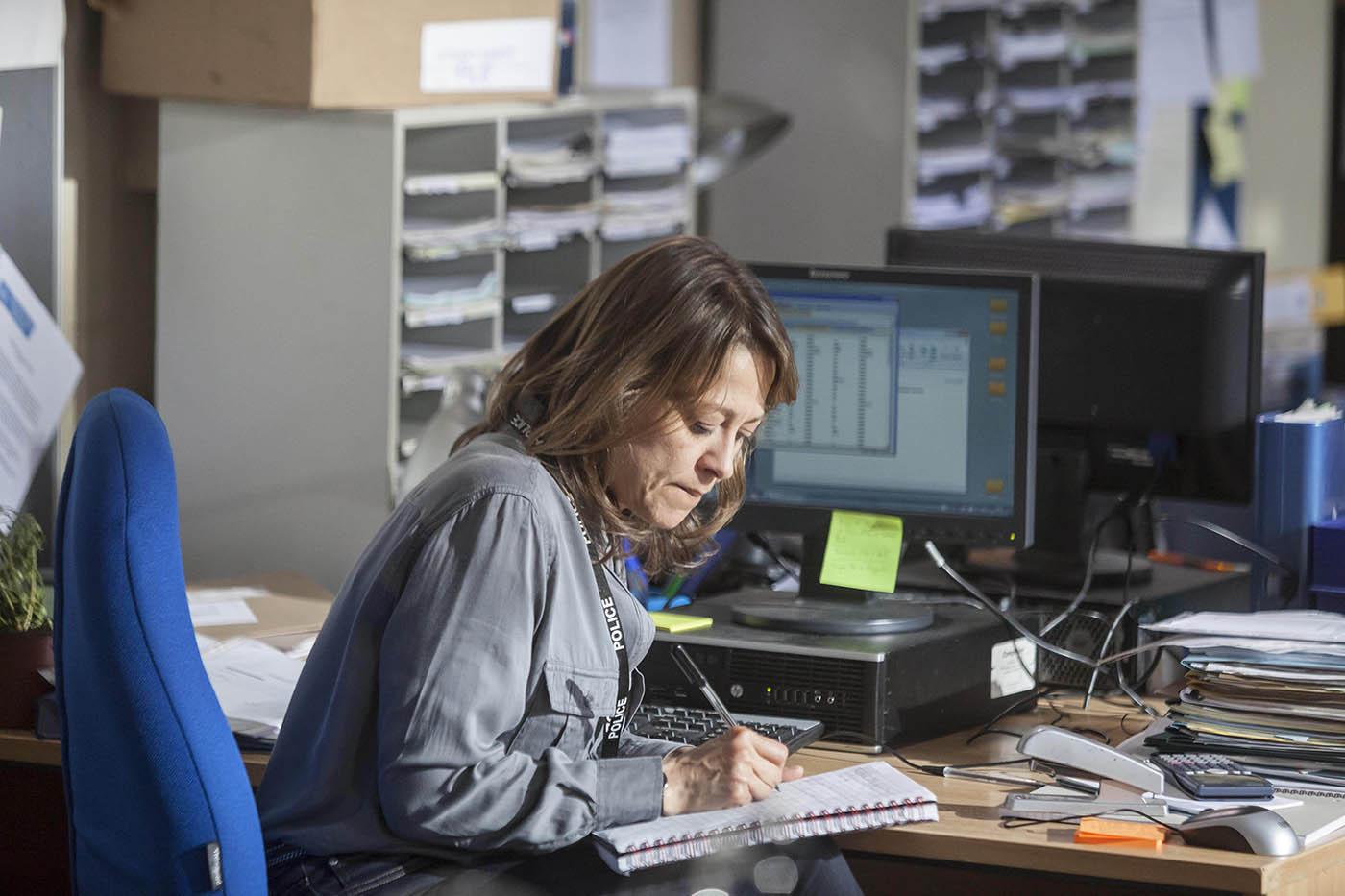 Sunny and Cassie must tease out how everyone is connected to Jimmy – and it seems like most of them are implicated in his troubles. Photo: John Rogers/Mainstreet Picture

When Cassie and Sunny bring Lizzie in to ask about the robbery, she confirms that it happened. She especially regrets it because she had befriended Jimmy during a brief period spent away from Vincent and drink; Jimmy was teaching her to read and write. But she insists Vincent didn’t kill Jimmy.

So Jimmy lost the money before the abortion. But was it his child? Father Robert admits to having a brief affair with Jo-Jo when Cassie and Sunny confront him, but claims not to remember her last name. He soon ended it and Jo-Jo moved away. (Cassie’s family has its own long-concealed affair: her father has found letters between her deceased mother and a lover.)

By searching through the records of phone booths near Robert’s house, Cassie and Sunny are able to locate Jo-Jo. She would have been fifteen at the time of her affair  and her timeline of when she was with Father Robert and when she was dating Jimmy is fuzzy.

Robert tells his wife about the affair – 39 years late. Devastated, she tells her daughters. Robert is kicked out of his house, and finds refuge with his assistant. She has some good news, at least: the police have found footage of the person who robbed Robert’s community center. She’ll be going in tomorrow to see if she can identify the perpetrator.

Since everyone else seems to have lied about their past, what about Eric Slater? When Cassie and Sunny bring Jimmy’s mother to visit the place his body was found and look at old pictures of the hostel, they realize some of Eric’s statements about the hostel didn’t add up. They’re also curious about his wife Claire’s remarks that Eric sometimes disappeared at night and had to work hard to wash his clothes after – comments chalked up to her dementia at the time. (Those remarks may have earned Claire a black eye, though she claims she fell.) 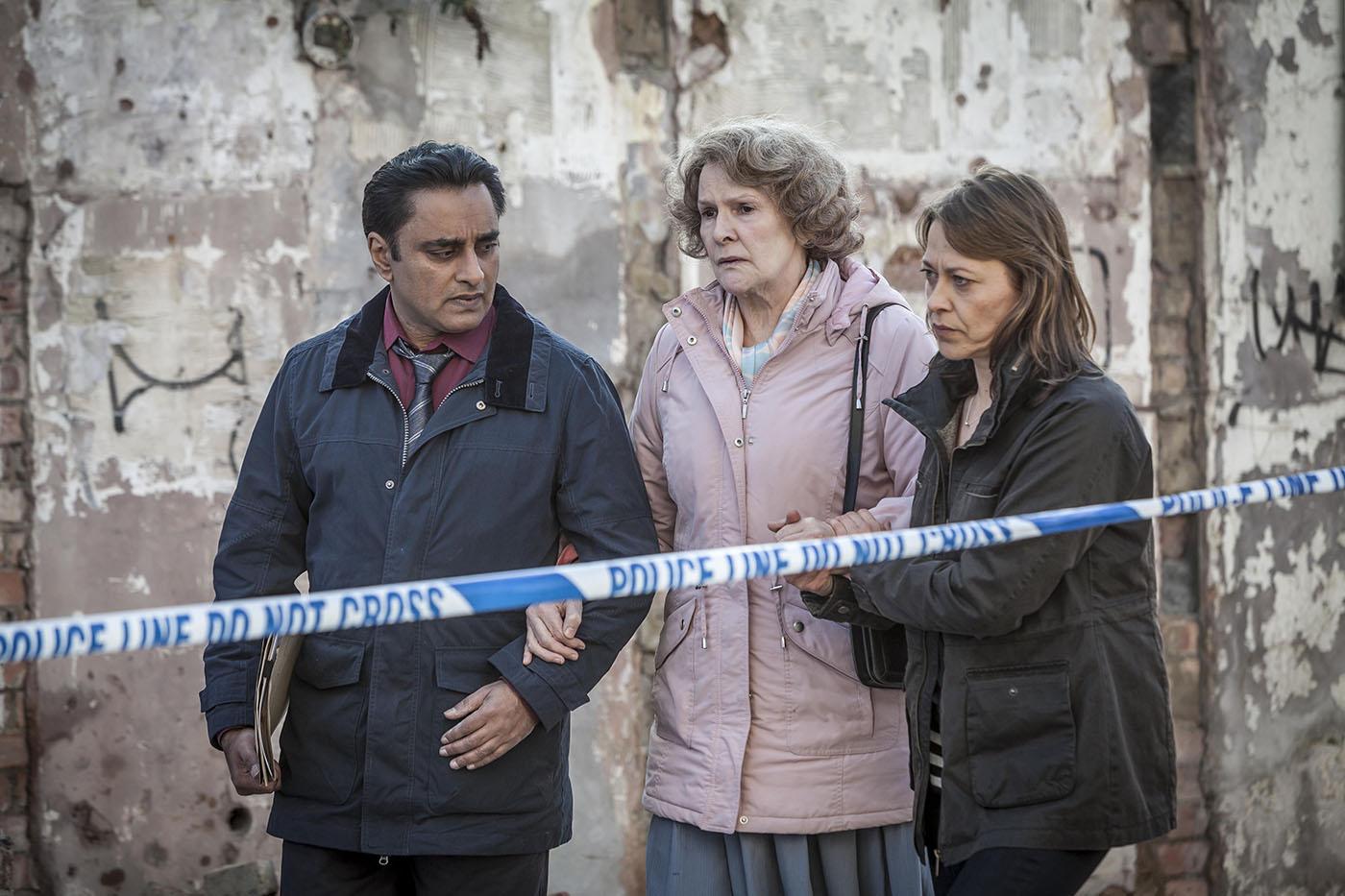 When Sunny and Cassie bring Jimmy's mother to see where Jimmy's body was found, they realize there are inconsistencies in Eric Slater's remembrance of the hostel. Photo: John Rogers/Mainstreet Picture

Cassie and Sunny discover that Eric has a record: he assaulted someone in 1973. When the detectives ask him about it, he says it was over football. But when they talk to the sister of the now-deceased victim, she says it was because her brother was gay, and that Eric would have killed him if a cop hadn’t shown up.

Eric maintains it was just a fight over sports, but accidentally reveals in the interrogation that he knew Jo-Jo was Jimmy’s girlfriend, something the detectives never told him. Newly suspicious, Cassie and Sunny leave Eric to enjoy a celebration of his 45th wedding anniversary. During that party, Claire runs outside in the rain, followed by her son Les. Eric used to hurt people, she tells him, but because of her dementia she’s no longer sure what is real.

Lizzie also runs away during the downpour. Someone threw a brick through her window and spray-painted “Racist Scum” on her garage. When Ray comes home to this, he finds the house empty and a note on the ground: “Sorry,” it says.

As they drive through the rain, Cassie and Sunny get a phone call: another victim has been found.