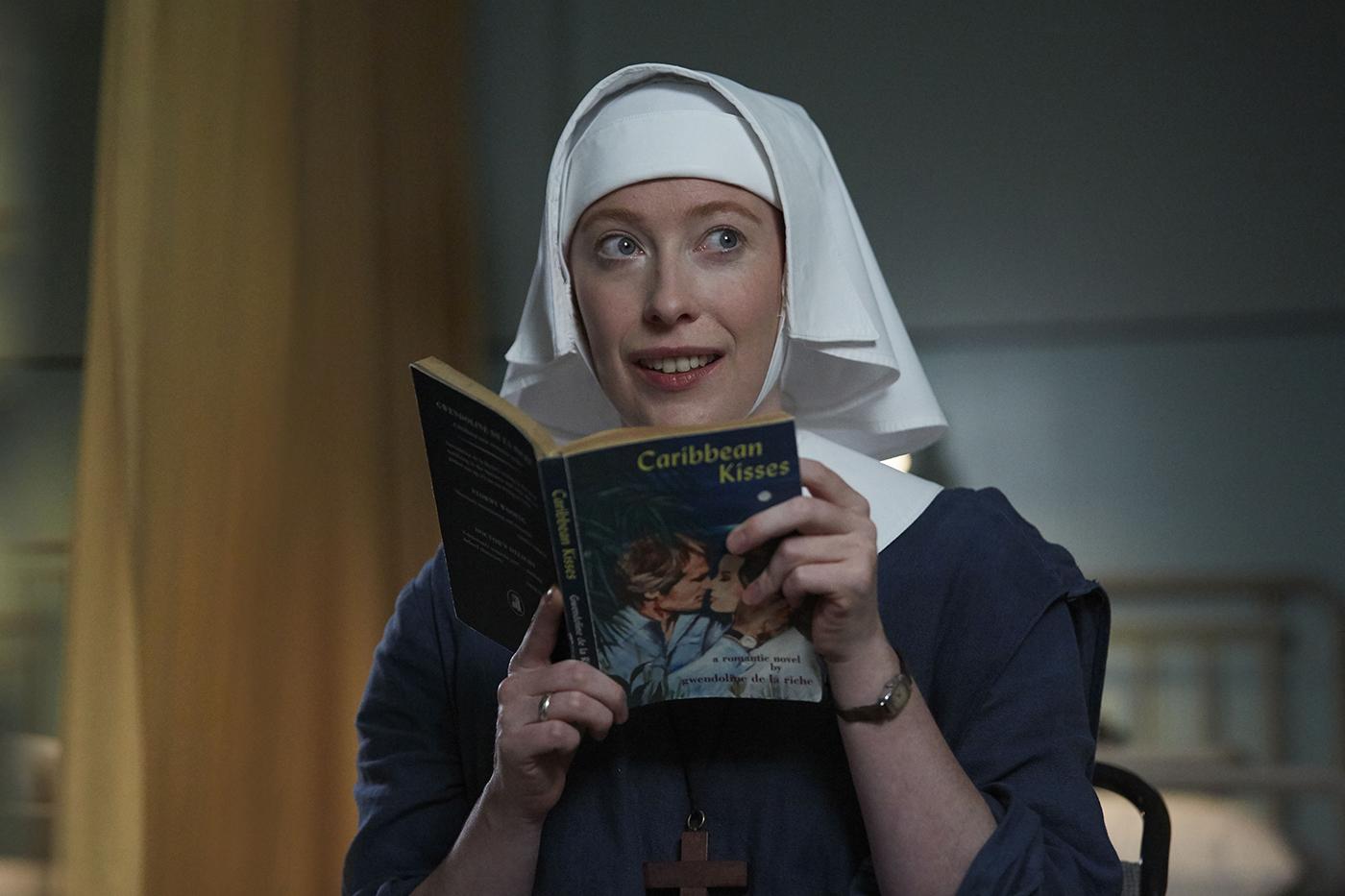 The Davidson family is looking forward to a bright new future in Poplar. They have bought a general store and have just emigrated from Northern Ireland to leave behind the religious troubles there. As they’re unpacking, Terry, the father, goes to pick up fish and chips. On his way back to his new home, he takes his eyes off the road and slams into a truck, perishing instantly.

Terry’s wife Pearl is now left to run a store, settle into a new house, and raise two children – with another on the way – all by herself, and she doesn’t have any friends or family in Poplar to help out. But she’s determined to stick it out and survive on her own, despite displays of sympathy from Fred, who was also left alone with two children after the death of his wife.

When Barbara visits Pearl at her flat above the store for a check-up, she suggests that Pearl move back to Ireland and her family, but Pearl insists there’s nothing there for her. Soon, there’s barely anything in Poplar either. Another disaster strikes: fire breaks out in the store. Barbara and Nurse Crane, walking home from a concert, spot the smoke and rush to help. Barbara calls the fire department while Phyllis breaks a window and runs upstairs to the flat, waking up Pearl and warning her. 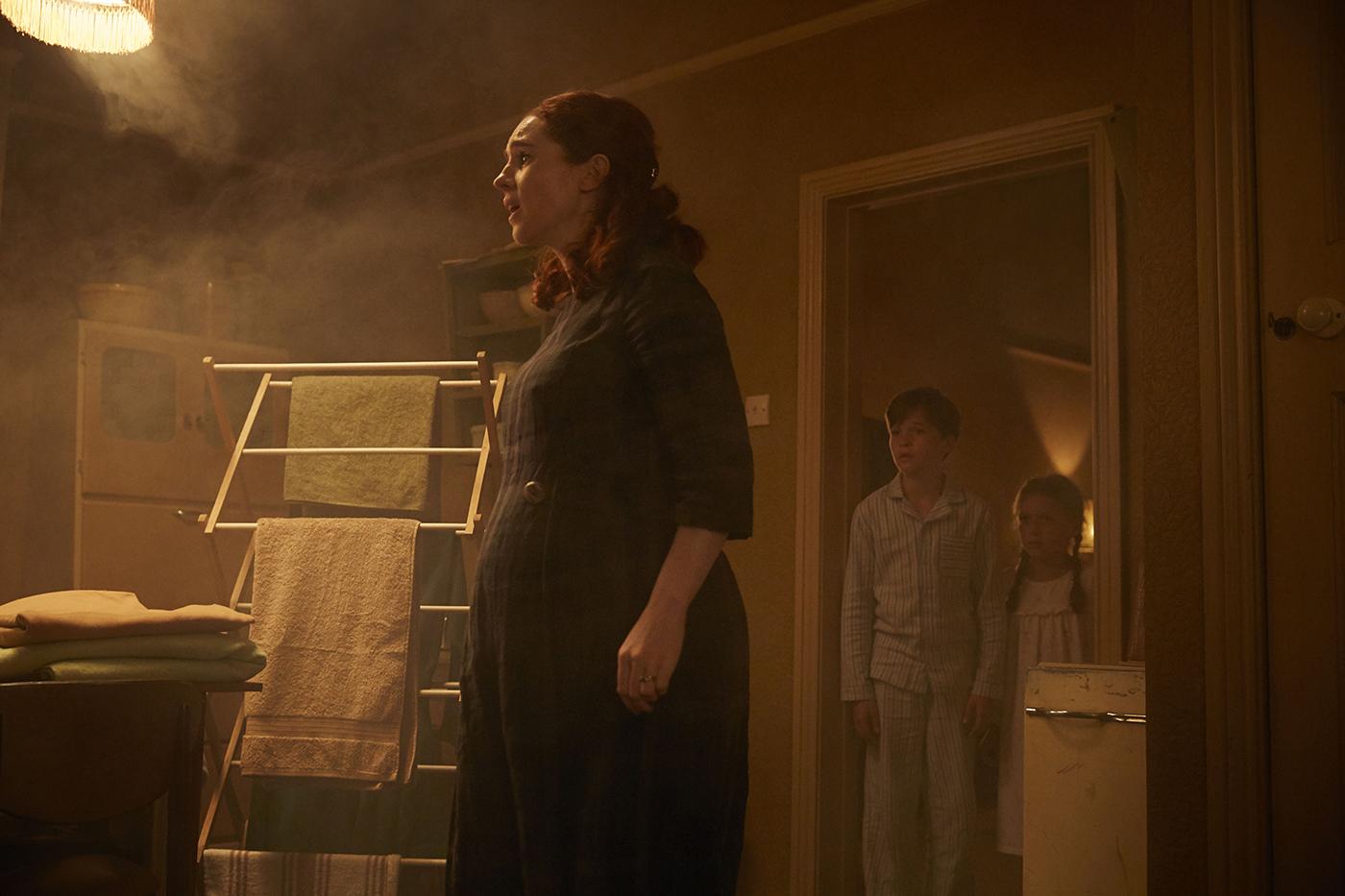 As if Pearl Davidson wasn't already suffering under the weight of enough difficulty, another disaster flares up. Photo: Neal Street Productions

As the firemen arrive, Phyllis ushers the Davidsons out of the building to safety, having inhaled plenty of smoke. Barbara takes the unlucky family to stay with her and Tom for the night. But the excitement doesn’t stop there. Before the adults can settle in for some needed sleep, Pearl goes into labor.

Barbara delivers a girl in her own bed, but Pearl’s long night still isn’t over: she’s carrying twins. With Dr. Turner on hand to help, Barbara delivers the second baby, a boy. Pearl has just doubled the number of children she has to take care of. And, since she and Terry had yet to get insurance, she doesn’t have the means to repair the badly damaged store and flat, so she has neither a place to live nor a way to make money.

Luckily, Poplar is a kind and generous community. While Nurse Crane collects clothing donations for the Davidsons, Fred organizes a team of craftsmen to repair their property. As soon as Pearl is ready to come home from the maternity ward, everything is ready for her to resume her life – without a husband, but with new friends. 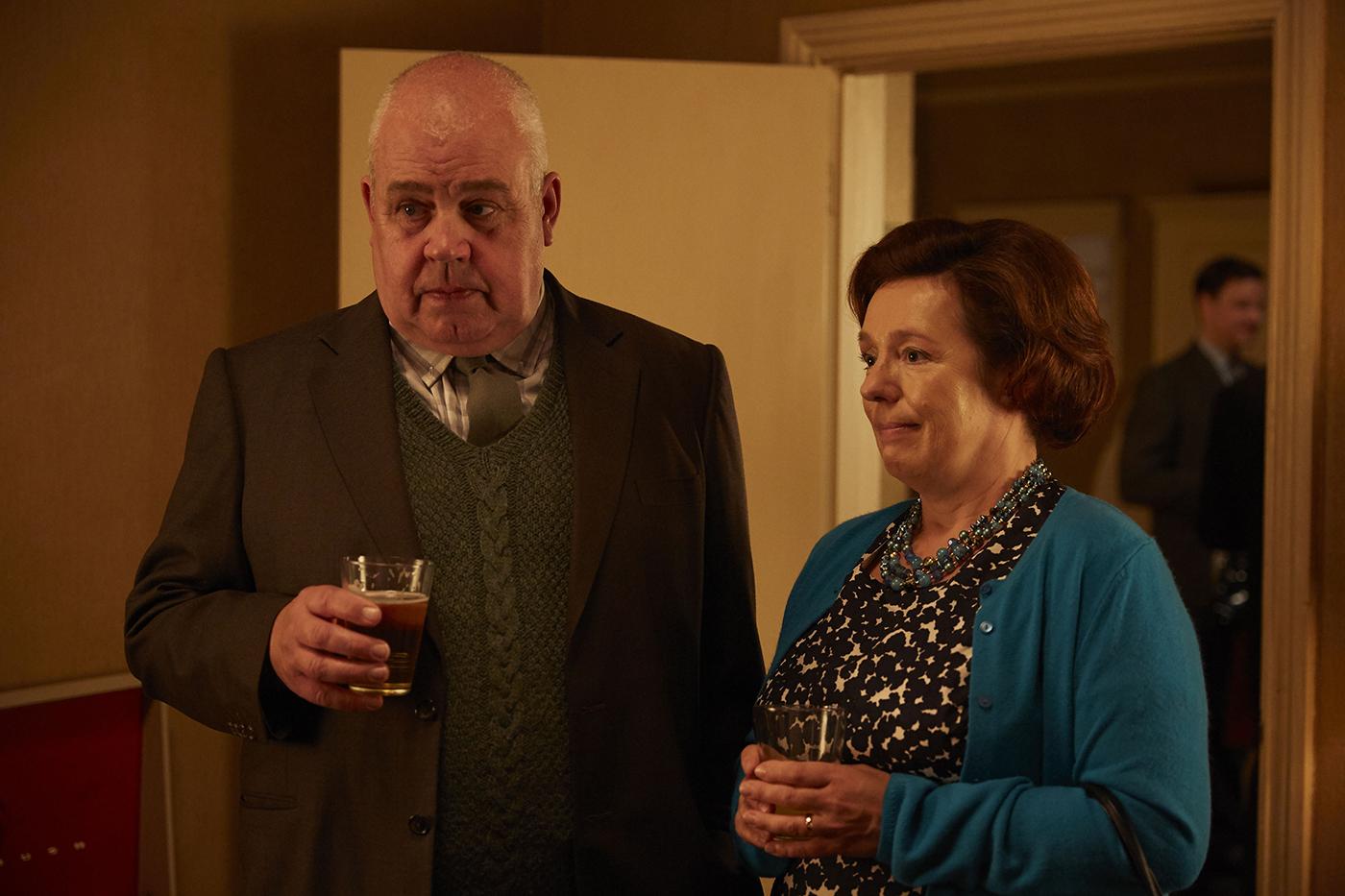 Sister Monica Joan also finds support amongst strangers when she goes in for her cataract surgery. Terrified, she’s hoping to meditate in silence until the surgery but is loudly interrupted by the arrival of another older woman who will be undergoing the same operation. Maudie Valentine is the opposite of Monica Joan: coarse, bawdy, secular. But when the two women are lying immobile at night after their surgery, an eyepatch over one eye, Monica Joan – exultant that she has survived the surgery – gives strength to Maudie in the darkness.

Soon enough, the unlikely pair are teaching each other songs and sharing stories about their very different lives. When Sister Winifred comes to read Keats to Monica Joan as she recovers, Maudie suggests they read a romance novel – Caribbean Kisses – instead, and the two sisters are soon hanging on every steamy word.

When the two patients are discharged, each with the sight in one eye restored with the addition of glasses, they promise to visit each other – they are now like sisters. Maudie gives Monica Joan Caribbean Kisses, which she passes on to Shelagh. The mothers in the maternity clinic will love it – but Shelagh had better read it first just in case.

One mother at least would not be happy to see the sensual novel at the clinic. Maureen Walker is fiercely protective of her teenage daughter Elizabeth. When she caught Elizabeth reading a romance novel, she banned her from going to the library. So you can imagine her reaction when she discovers that Elizabeth has been going to the youth center to attend sexual health classes taught by Valerie and an uncomfortable and skeptical Lucille, not to play ping pong. 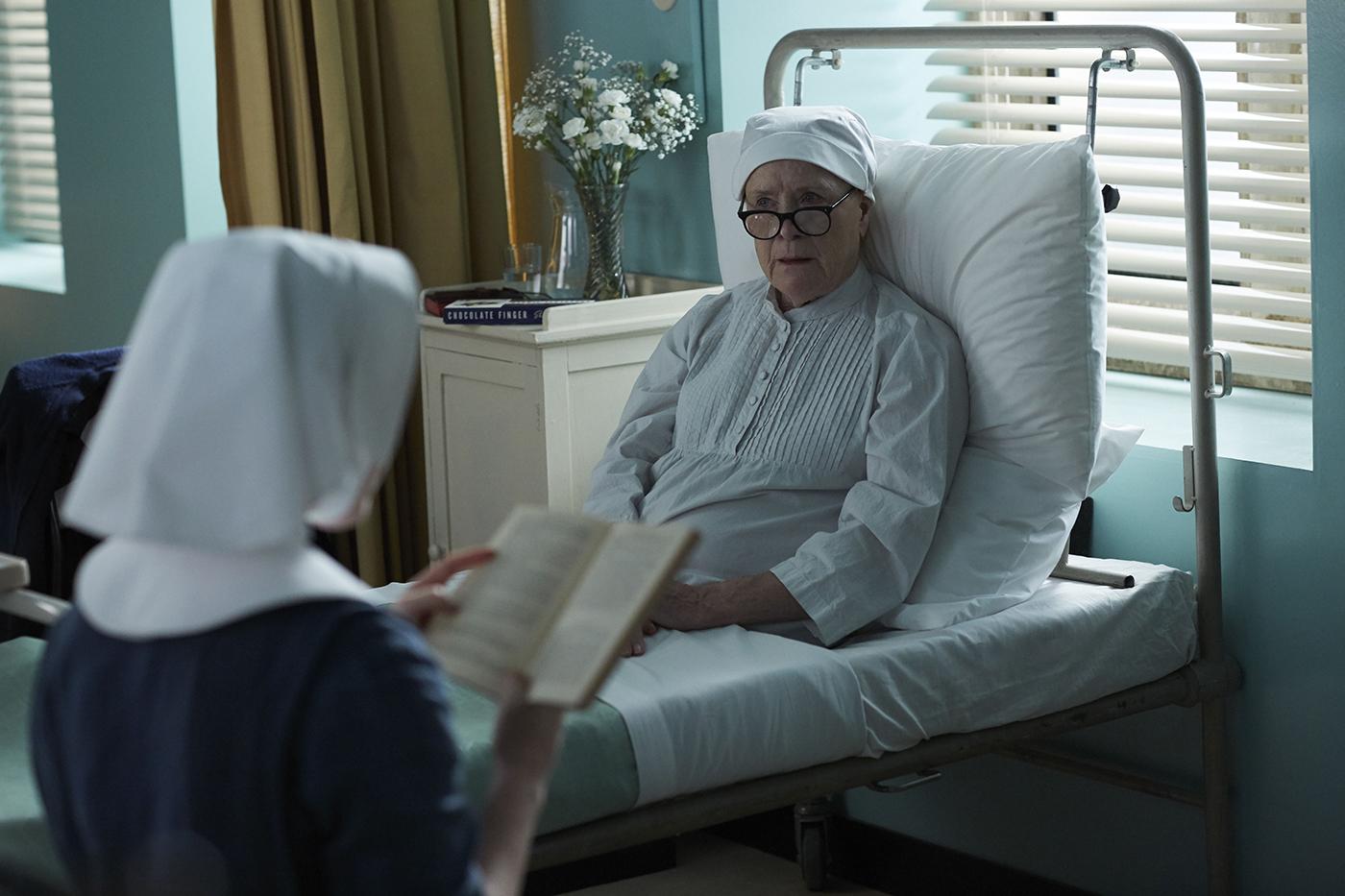 Sister Monica Joan is astonished by the miracle of her restored vision, and by her surprising friendship with a fellow patient. Photo: Neal Street Productions

Maureen scolds the nurses for spouting “filth” that destroys lives – she would know, it happened to her sister. As the girls file in for the next class, Maureen harasses them, forcing Valerie to pull her aside into another room. Valerie sternly chastises her and insists she tell what happened to her sister. Maureen explains that her sister Lily liked boys a bit too much and was sent by her parents to a reform school after sneaking out. Maureen hasn’t seen her since – why bother, after such a moral transgression? Valerie is aghast.

Shamed into regret by Valerie, Maureen meets with the nurse again. She wants to find Lily. She figured she would pick up the trail at the reform school Lily attended. Except it wasn’t a reform school – it was a mental institution.

Valerie and Maureen visit and find Lily still there. She was originally admitted for “moral insanity” as a pregnant fifteen year-old. When she gave birth, the baby was given up for adoption, and she never recovered mentally from the trauma of losing her child. She does remember Maureen, however, once Maureen shows her old photos.

Maureen reveals to her sister that her husband left her because she had trouble being intimate with him – their mom always moralized against “girls who like it.” Valerie is disgusted by the entire situation – but it at least makes Lucille realize the utility of sexual education. She apologizes for doubting the necessity of Valerie’s classes. And learning her sister’s history makes Maureen soften up. She begins to visit Lily regularly, and allows Elizabeth to go to the library once again.

Not all is well, though. Having helped Pearl Davidson through her traumas, Barbara has gotten sick – very sick. Doctor Turner thinks it’s septicemia. Barbara is rushed to the hospital right away.