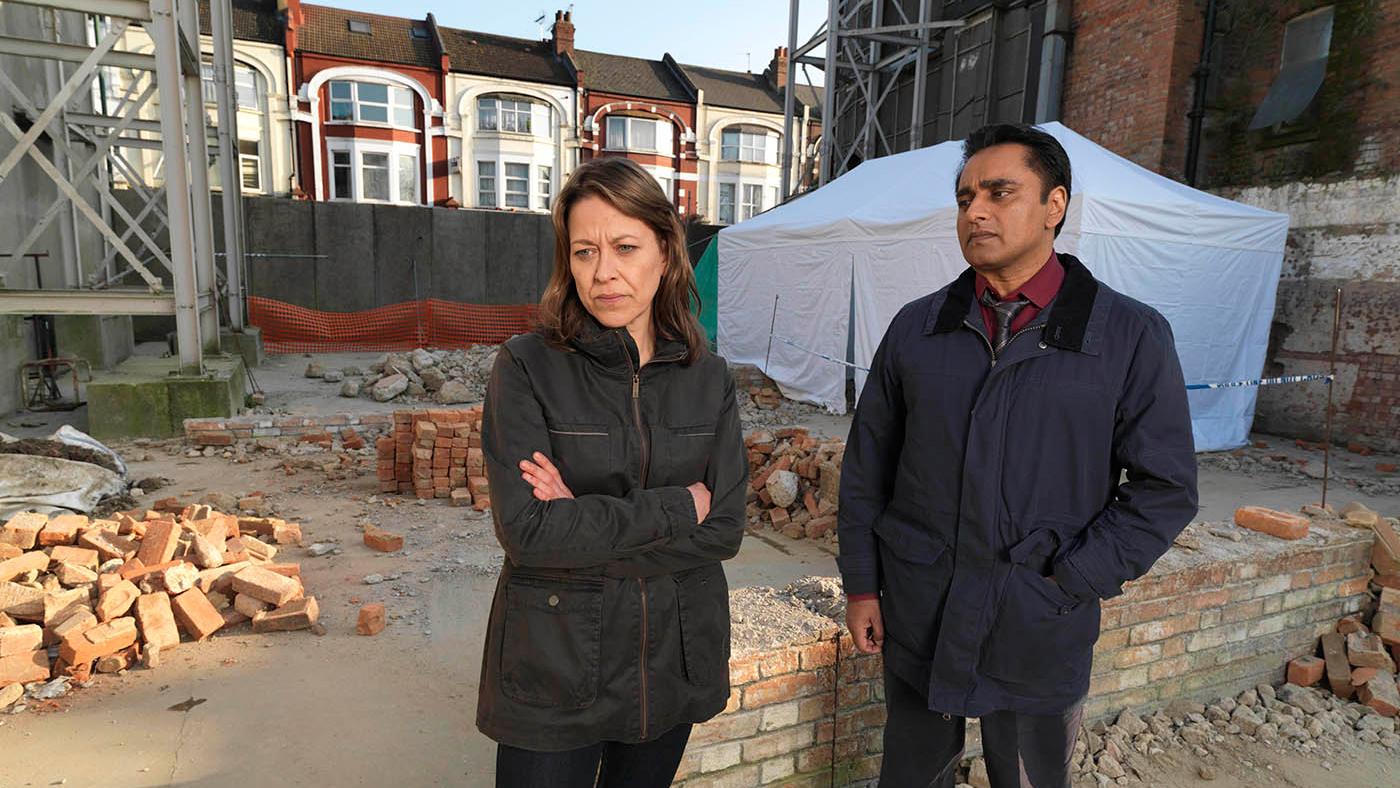 The discovery of a second body helps lead Cassie and Sunny towards their suspect. Photo: John Rogers/Mainstreet Pictures

Unforgotten is available to stream. Read our recaps of the previous episode and the next season's premiere.

And the new victim is… another unknown cold case. After Eric Slater’s wife Claire told her son Les that Eric used to hurt people – and that she thinks she once saw him bury a body in the back yard – Les calls the police. Cassie and Sunny thus return to the Slaters’ home, interrupting their anniversary party, to question Eric and search the grounds for a body. When Cassie confronts Eric with the charge, he weeps.

At the police station, Claire proves an unreliable witness: her dementia prevents her from remembering anything clearly. Eric suggests that the body could have been buried in his yard by one of the unsavory characters from the hostel he worked at. But when a skeleton is finally found and identified as a Nicholas Whitmore, Whitmore doesn’t seem to have any connection to the hostel.

Cassie learns from Whitmore’s family that he was gay and frequented the gay pub at which he was last seen, in 1978 – two years after Jimmy’s death. On the basis of this knowledge, Sunny and Cassie construct a sound theory, which they present to Eric. Given that Eric was once charged in the assault of a gay man outside a gay pub, the detectives believe he nurtured a violent homophobia and therefore killed Whitmore. Eric’s bank statements prove he was at Whitmore’s regular pub on the night he was last seen.

But where does Jimmy fit into this? He had a girlfriend and doesn’t seem to have been gay. But the detectives have learned from one of Jimmy’s friends at the hostel that when Jimmy first came to London he worked as a prostitute. After being robbed by Vincent and Lizzie, he must have gone back to the work for money. Eric even told Jimmy’s friend that he saw Jimmy servicing a client – Eric’s hatred must have incited him to kill Jimmy. 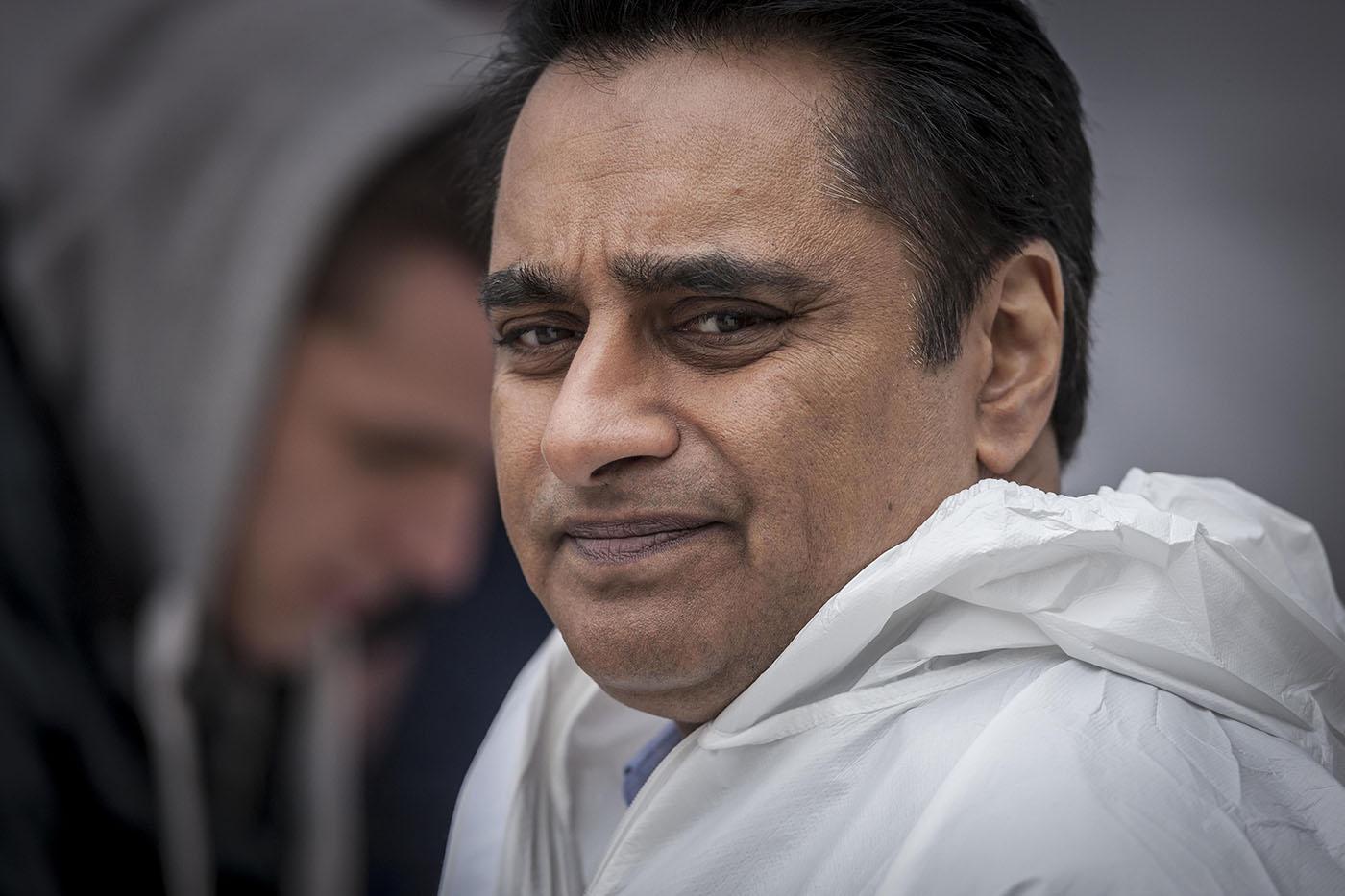 Sunny and the other detectives seem to have finally found Jimmy's murderer, and have a sound theory to back their guess up. Photo: John Rogers/Mainstreet Pictures

Eric is charged with both murders and locked away. His arrest is soon all over the news, leading the family of Phillip Cross to feel some relief: with the distraction of this case, Gordon Fenwick won’t be successful blackmailing Phillip. Unfortunately, Phillip has already asked his son’s Turkish friends to keep Gordon quiet, and now Phillip can’t get a hold of them to call it off. Gordon Fenwick is found dead in an “accidental” house fire.

Worse, Phillip’s Turkish contact then calls again: the man who took out Gordon has been arrested. He won’t give up Phillip’s name – as long as Phillip pays two million pounds. But Phillip is done with bribes. He ominously threatens the Turk and hangs up.

Father Robert has also decided to change his ways. No more lying. He confesses to his assistant that he is the one who robbed the community center, and that he has also stolen from the church and from his wife, in the form of jewelry. The assistant lets him leave, then goes to the police. She also tells Robert’s wife Grace about the confession. Grace in turn calls the bishop, who looks at records and begins to suspect that Robert has stolen tens of thousands of pounds over the years.

After the bishop finds Robert at his church, Robert visits Grace and his daughters to come clean. He stole the money to support another daughter. During his affair with Jo-Jo, 39 years ago, Jo-Jo got pregnant. Robert gave her the money for an abortion, but two years later she called him to say that she couldn’t go through with it. Robert supported the daughter, Thea, financially until she was 18, and has continued to give her money when she needed it – money he didn’t have, and so stole. As Robert leaves Grace and his daughters to go to the police, one daughter furiously beats him with her fists. It’s not likely he’ll be forgiven.

Lizzie, on the other hand, has been, at least by the two people who love her most. Ray has been searching all night for her. While most of the boys from his football club don’t want to help him – they’re still upset by Lizzie’s past – Curtis eventually joins the search. Lizzie seemed to know some homeless people who lived downtown near the Thames, he tells Ray, so the pair go there to hand out photos of Lizzie. They eventually find someone who saw her – but she jumped into the river.

Was she trying to drown her guilt? Did she murder Jimmy? Eric has told Cassie and Sunny that they have the wrong culprit, and he’ll tell the detectives who the murderer is if they move him to a prison closer to his son Les and allow him a psychiatrist. Sunny doesn’t believe him, but Cassie’s gut tells her to listen, so they grant Eric’s requests.

And he reveals… it was Claire, his wife. Eric is not a violent homophobe – he’s gay, and has always tried to suppress it. Yet he still went out at night to gay pubs – his assault charge was because his lover wanted to be roughed up. Claire figured out Eric’s nocturnal doings, and snapped while suffering from postpartum depression. 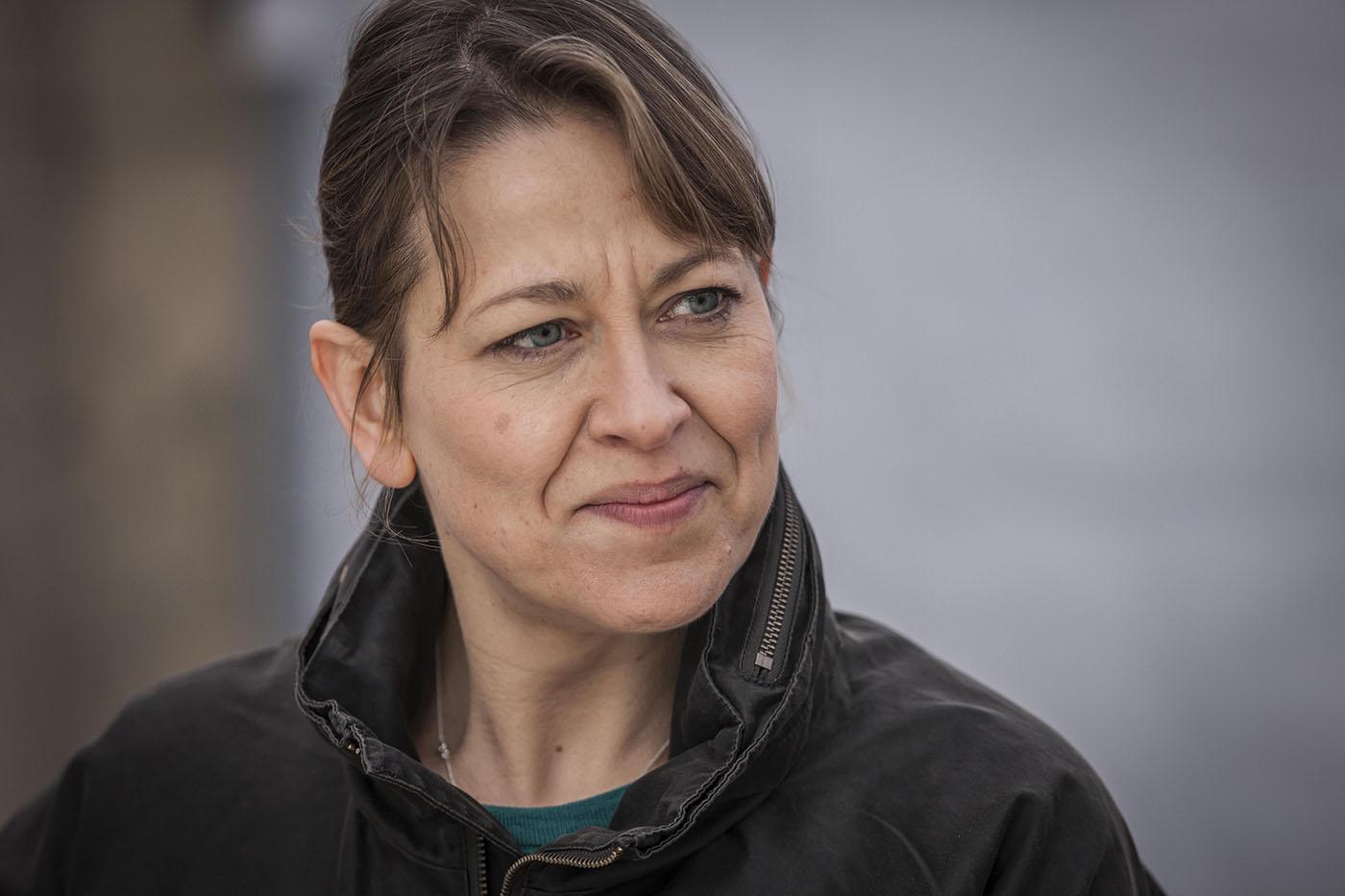 While Sunny is skeptical of Eric Slater, Cassie has a gut feeling that Eric should be listened to. Photo: John Rogers/Mainstreet Pictures

After the birth of their first child, she found Eric in the cellar of the hostel with Jimmy and smashed Jimmy on the head with a hammer. Eric buried the body to protect her, fully expecting – and perhaps hoping – to be caught. Two years later, after the birth of their second child, Claire again found Eric, this time in his car with Nicholas Whitmore, and stabbed him. Again, Eric buried the body. He then tried to kill himself by driving into a tree, but only paralyzed his legs.

If this story is true – Cassie believes it, Sunny is skeptical – there is no way to charge Claire, given her dementia and inability to remember events clearly. When Cassie and Sunny interview her, she becomes hysterical, haunted by foggy memories and afraid of what might have happened. She does, however, reveal that she knows Eric is gay – which seems pretty damning evidence. Claire is sent to a home to live out her days under supervision – and the cruel treatment of her older son, who can’t forgive her past. Eric will serve a few years in prison for helping cover up the murders.

Another child decides to hold a parent accountable: Phillip’s son calls the police on his father, telling them Phillip paid for the murder of Gordon Fenwick. Despite the lack of evidence tying Phillip to the fire, he admits his guilt. In jail, he tells his children that all he ever wanted was for them to be better people than him. He commits suicide in his cell.

Robert also reconciles – partly – with his children. He speaks to his more sympathetic daughter when his other daughter – the one who pummeled him – has an emergency C-section. She asks about his illicit daughter, Thea, and he tells her he sees Thea once or twice a week – more than he sees his legal children.

Thea then calls her half-sister and they meet. Thea tells her that Robert wanted to tell Grace and his children about Thea, but Jo-Jo threatened to never let him see her again if he did. He kept the secret so that he could be a part of all three of his children’s lives. Robert is partially forgiven – at least enough to be invited to his daughter’s wedding, along with Thea.

And Lizzie? She was pulled out of the river, unconscious, and sent to the hospital, where Ray and Curtis find her. When she returns to the football club, the boys are standoffish, but Curtis quickly re-ingratiates her, and things return to normal. It’s like Cassie’s dad tells her after she walks in on him with a woman: you’ve just got to move forward in life, no matter the past, because that’s all you can do.